“The first prize in the raffle is a Lada. The second prize is two Ladas.”

Of course you’ve heard this joke and plenty of others like it. After all, for many years, the Lada - the People’s Car of the Soviet Union - was seen as a punchline. A comedy machine, and a playground joke.

Yet for the last 15 years or so, this humble Soviet car once derided for its shoddy build, poor reliability, and agricultural underpinnings has enjoyed - and still is enjoying - a renaissance at home and abroad.

In the Western world (the former Ground Zero of gags about Eastern European cars) the Lada is now very much in demand within the classic car community thanks to its low buying costs and relative mechanical simplicity. With over 20,000,000 of them sold between 1970 and 2012, spare parts are also cheap and plentiful.

The car has also won the hearts of many tuning enthusiasts thanks to its uncomplicated mechanicals, rear-wheel-drive configuration, and a low-kerb weight of around 1,000 kilograms.

In the United Kingdom alone, this newfound love for the Lada amongst tuners is evident - in recent years, Retroford has re-worked a Lada 2101 with plenty of old Fast Ford running gear to handle its experimental 235bhp, 2.3-litre Cosworth engine.

Don’t believe us? Check it out on SpeedHunters.

What’s more, the legendary classic car restorer, Ian Nixon, has also spent over £100k to create a stance Lada 2103 and is also rumoured to have a Lada 2102 wagon with a Ferrari V8 engine in the works…

The Мята or ‘Mint’ Lada 2101 is just one of many stance Ladas that have been given a new lease of life thanks to the LowDaily movement
© LowDaily.ru/Valowcardin

So this begs the question: why is a former automotive joke now seen as not just a guilty pleasure, but something that’s actually desired by classic car enthusiasts globally?

To find out, Dyler travelled (virtually, via Instagram!) to Russia to meet Ilia Shimanovskiy - automotive photographer and videographer, journalist, and Lada enthusiast.

Most importantly for us today, Ilia is also the founder of the LowDaily stance and tuning community - a movement which spent the last 10 years nurturing car culture in Russia, and changing perceptions about Soviet-era cars at home and abroad.

Given the role both he and LowDaily have played in the Russian Car Renaissance, we didn’t think there was anyone better to ask about the newly-discovered love for the Lada.

The floor is yours, Ilia...

Dyler.com: Where did the idea of LowDaily come from when you started it back in 2011?

Ilia Shimanovskiy: It all started around 10 years ago, really. Most of us involved with LowDaily had already been working with car magazines and other automotive-based publications in Russia for a while as photographers, writers, and editors. I'd say that 2011 was the turning point, because a lot of magazines were closed due to the economic crisis, and it hit print really badly.

Where most of us are freelancers, we decided to try and do our own thing because we had pretty much everything we need to do this - we had experience of covering stories and doing photoshoots of different modified cars abroad, and we decided to use these as references to create something similar in Russia. 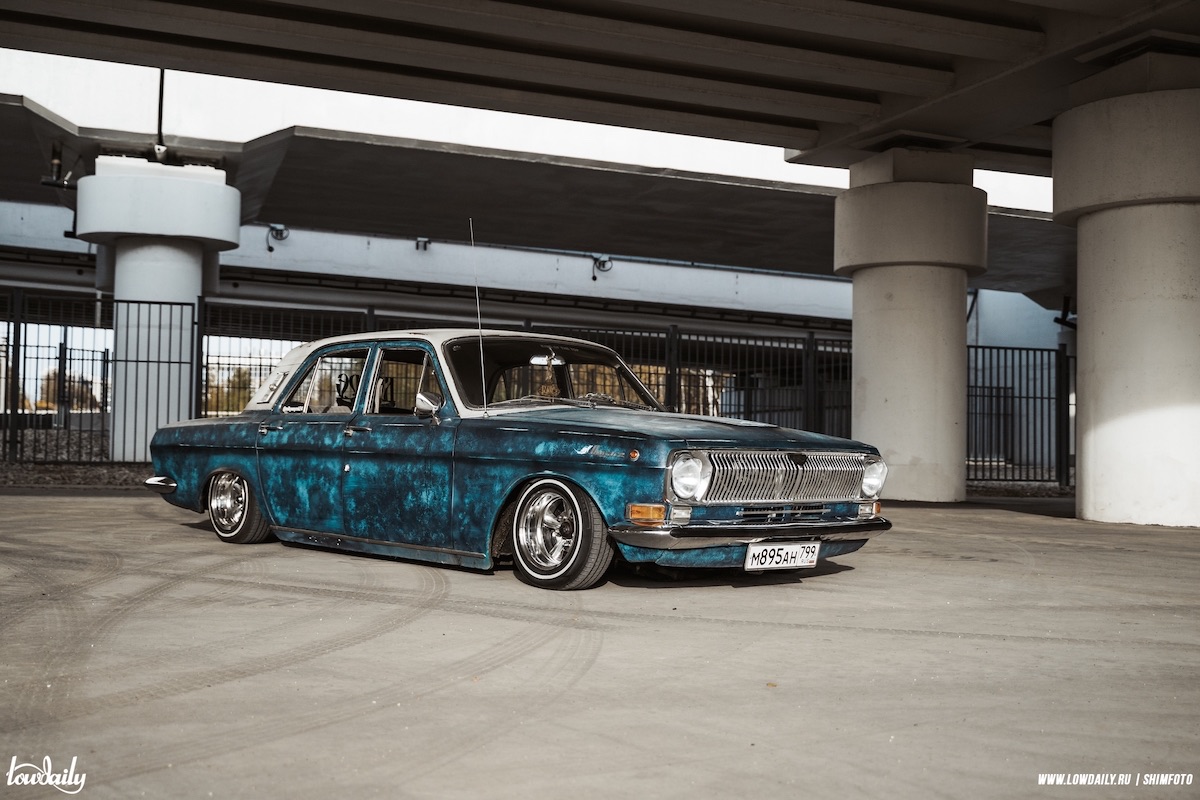 It was only in the late-2000s that car culture - and especially modifying and stance - really started taking off. Whilst we had some really well-done, stylish project cars over here, there weren't too many of them. Like I said, we wanted to create something that shows off Russian car culture, so we organised the first LowDaily event where we decided to get all of these cars together, to show that we have a car culture here, and that we need to modify more cars.

So that's how LowDaily came about, really. I wouldn't say it's specifically a community, a car club, a blog, a website, or even though we sell cars too - a garage. To me, it's just one big friendly family who enjoy tuning all kinds of cars from our country, and everywhere else!

Dyler.com: Why are old Soviet-era cars so popular with young people and the tuning scene in Russia and the wider former USSR?

Ilia S.: Right now, the most popular cars amongst the Russian mod scene are VAZ and its Zhiguli models or "Lada" as it was called in the West. You can pick one of these up for around 20,000 to 50,000 Rubles, which is around the EUR 250 to EUR 600 mark right now. The GAZ Volga is popular too, but those are a bit more expensive because they're bigger and were considered luxury cars.

None of these old Soviet-era cars are as popular in Russia as they once were, so there are a lot of them just stashed away in garages and barns and forgotten about. There are also a lot of parts available across the former USSR, and they're also not expensive at all. I think the rarity of these old cars give newcomers to the scene a way to stand out in a big way for not a whole lot of money. 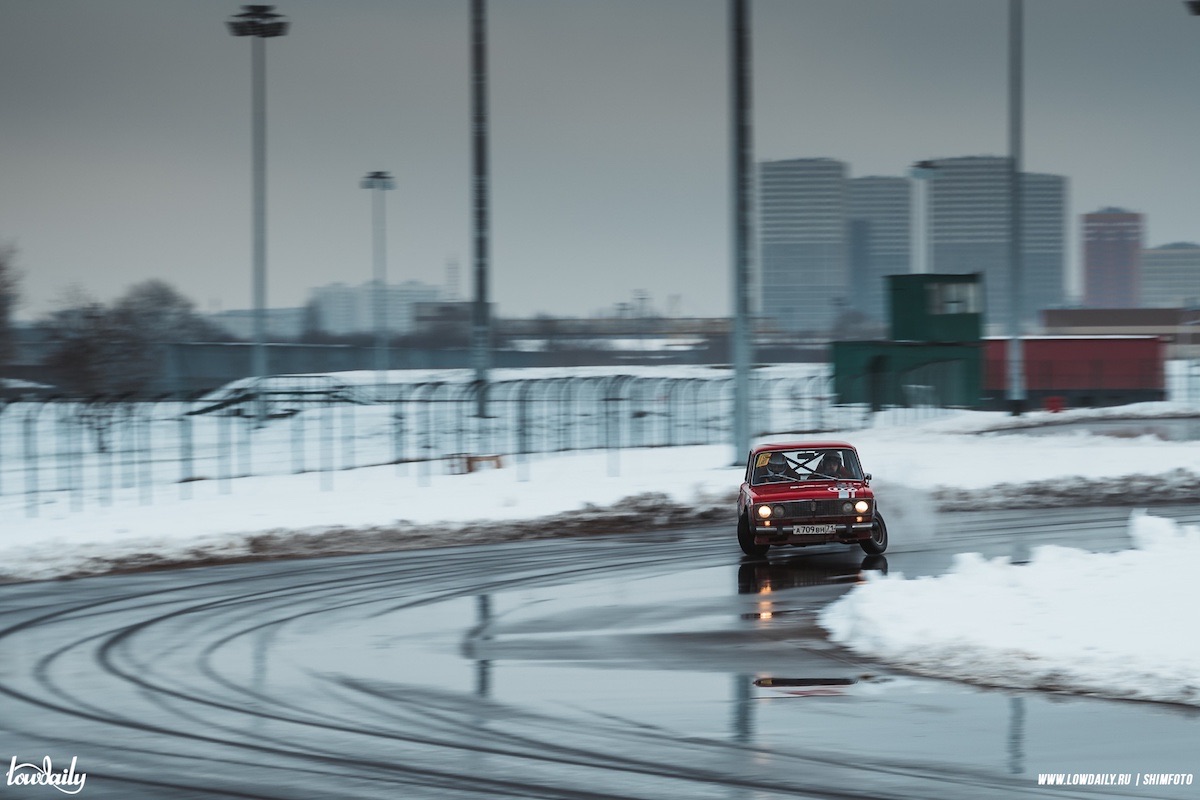 Whatever the Russian is for “full send”, that’s what’s happening with this Lada 2103 - for the price of a drink in London, you too could be doing this in a car park in Russia
© LowDaily.ru/Shimfoto

Alongside being an easy way into the tuning scene, they also make great drift cars. These cars from back in the day were very light, and compared to cars nowadays, they're pretty small.

They also have rear-wheel-drive, which is why they make for amazing drift cars. To be honest, they've contributed massively to the winter drift scene across our part of the world. I mean, you can buy a car for EUR 250 with some friends, spend the same amount on some mods, and you've got yourself a drift car for not much cash!

There are also plenty of local drift events in Russia that are held on frozen lakes and in car parks in towns and cities. They're really good fun, everyone is really friendly. I think these sorts of meets are a great way to get involved with the community.

Dyler.com: Is it true that the mod scene in Russia and neighbouring countries can be traced back to the Soviet Union?

Ilia S.: Yeah, sure. Throughout the country, modded Volgas were used as rally cars and touring cars in a number of domestic events from the 1970s up until the USSR collapsed in 1991. In Lithuania, VFTS also started tuning Zhigulis for domestic rallying during the ‘70s

That said, I think people have been tuning cars throughout automotive history. It doesn't matter where they are in the world. In Russia, it all changed in 2005 when the OnlyDropped, low-rider community came about. 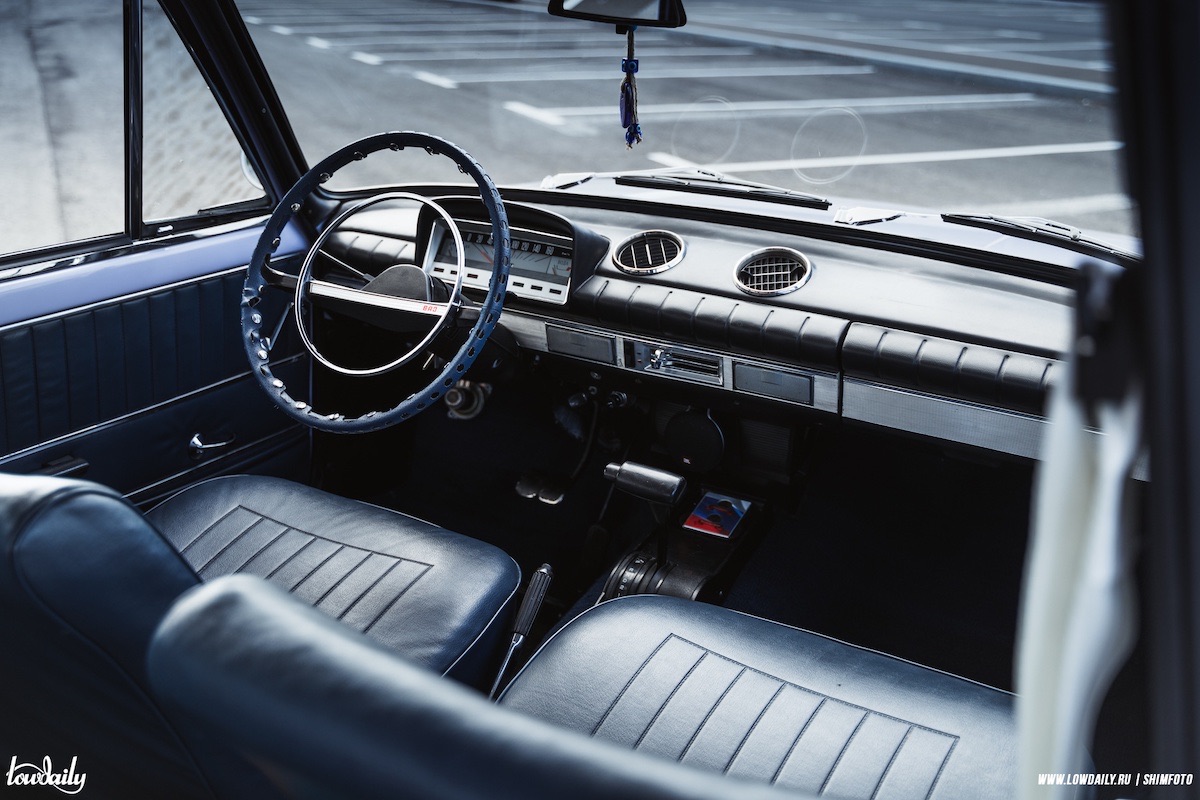 The LowDaily movement has seen enthusiasts improve the overall quality of their restoration projects
© LowDaily.ru/Shimfoto

Until then, everyone was just playing about and making a really bad job when it came to modifying Ladas and the likes. Thanks to OnlyDropped, a new-wave of modified and stance Soviet classic cars emerged in the mid-200s.

We call these types of car Resto Cars, because they've been restored to their original form to a really high standard. What makes them stand out though, is that the people who tune them put their personality onto the modifications - that's what makes these Resto Cars really special.

Dyler.com: As you know, there is an assumption in Western Europe that cars made in the USSR and Russia's early post-Soviet period are rubbish. Is there any truth in this statement?

Ilia S.: Yeah, this is perfectly true. Many of these cars are cheaply made, break down a lot, and because most of them were made using low-grade steel, they suffer from rusting issues. But again, where these are cheap cars, all of the spare parts are cheap, too.

That said, the very first Zhiguli cars - especially the 2101 which was introduced in 1970, and the later 2103 - are becoming very rare and sought after amongst classic car fans in Russia and around the world. As a result, both the cars themselves and their parts are becoming quite expensive even here where they were made. 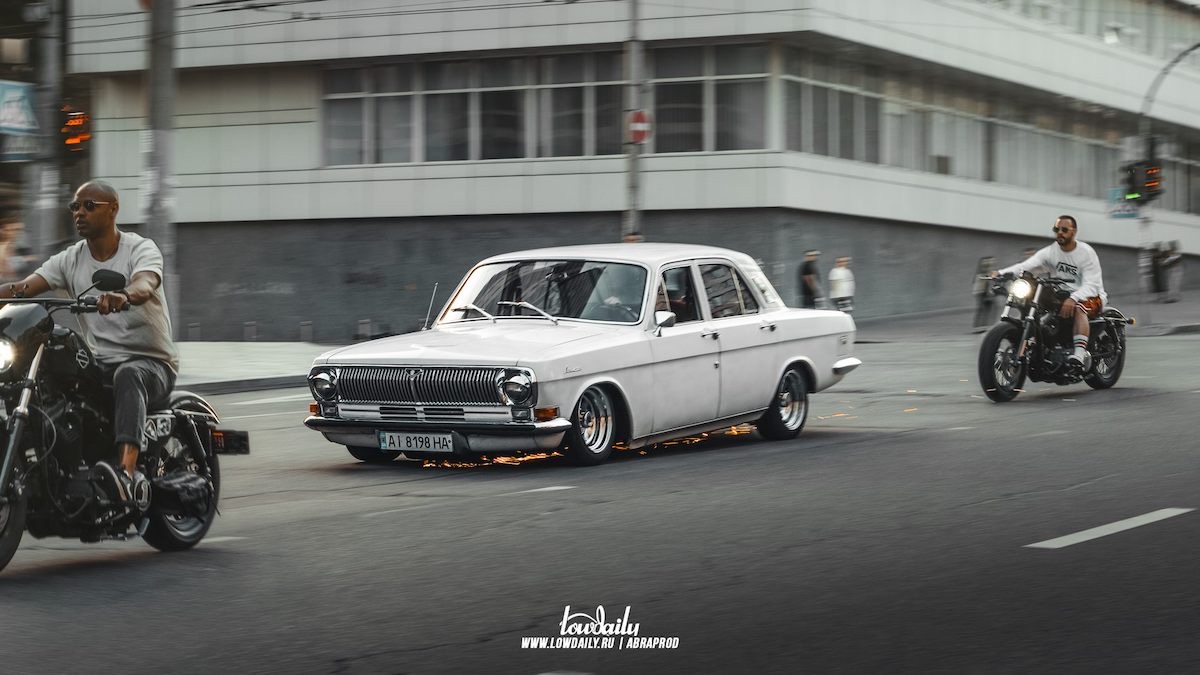 To be honest, early Zhiguli cars were made with a thicker-grade steel than later models, and they are far better made and more reliable than cars put together in the late perestroika period of the USSR or the early days of the Russian Federation in the 1990s. In fact, it's not uncommon to find an early-period car that's done 500,000 kilometres - or gone halfway around the world - without ever breaking.

Dyler.com: After many years of being considered a joke, why do you think Soviet cars now have a cult following in Western Europe?

Ilia S.: I think it's because they're something a bit different, right? They all have Russian language writing on the dials and engines, and I think if you can't understand that, that unknown is something quite appealing and it looks cool, too.

If we talk about the VAZ 2101 or the "Kopeeka" as we called it here, it's also very much a classic because it's been around for 50 years now and it was very much the first mass produced car in the Soviet Union. Getting a car was always difficult in the USSR, but the 2101 meant that car ownership was now something possible for people who never thought they would have the opportunity to do so. 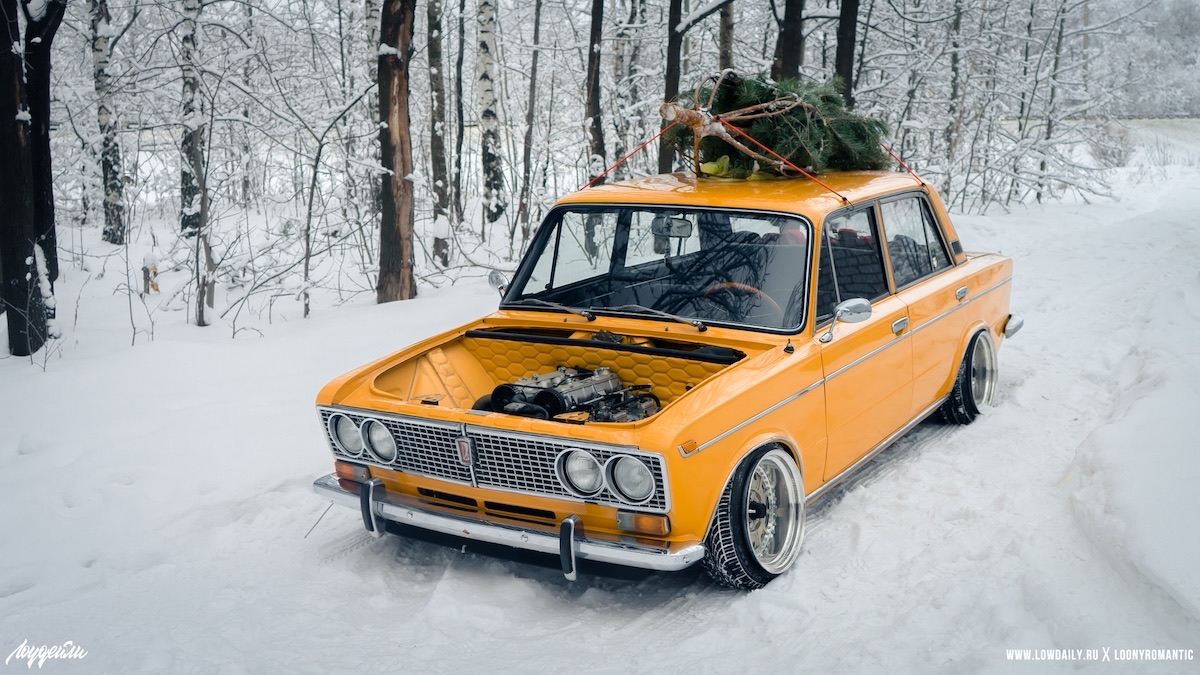 As you can see, there is no limit to what can be done with a Lada in the LowDaily community
© LowDaily.ru/LoonyRomantic

Don't forget that the 2101 was also developed between the Soviets and the Italians. It started life as the FIAT 124 back in the 1960s, and Italian cars are always popular in the classic world!

The 2101 was basically a more rugged version of the 124, which was developed by VAZ for the harsh roads and various climates of the Soviet Union.

Like I said earlier, the early models were very strong little cars and were much tougher than the standard 124 which apparently would shake itself apart when tested on the USSR’s rough roads.

Dyler.com: Do you think that tuning and modifying cars from the Soviet-era gives them a new lease of life?

Ilia S.: Absolutely, yes! The amount of love and money people pour into making these cars look spectacular. I know one guy, and with the amount of money he poured into this 2101, he could have bought a brand new BMW.

He's not the only one though, and I think this is something really special to see - I can honestly say that I'm really happy to see people properly modifying their cars and developing Russian car culture in our own unique way.

If you are interested in owning any of the Soviet-era cars mentioned in this story, please visit dyler.com.