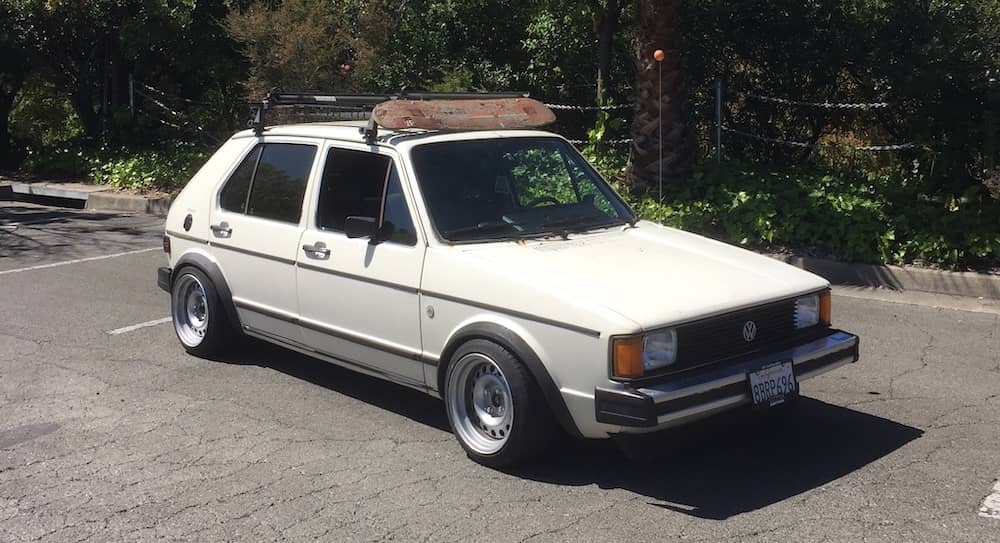 The Mk1 Volkswagen Rabbit in the United States was - and still is - a thumper of a phenomenon. Introduced by the Volkswagen Group of America in 1974 as a replacement for the loved-yet-extremely old Beetle, the now-cult classic Rabbit started out as a Mk1 Golf shipped from Germany to the US, where it was then bonded to the domestic market. 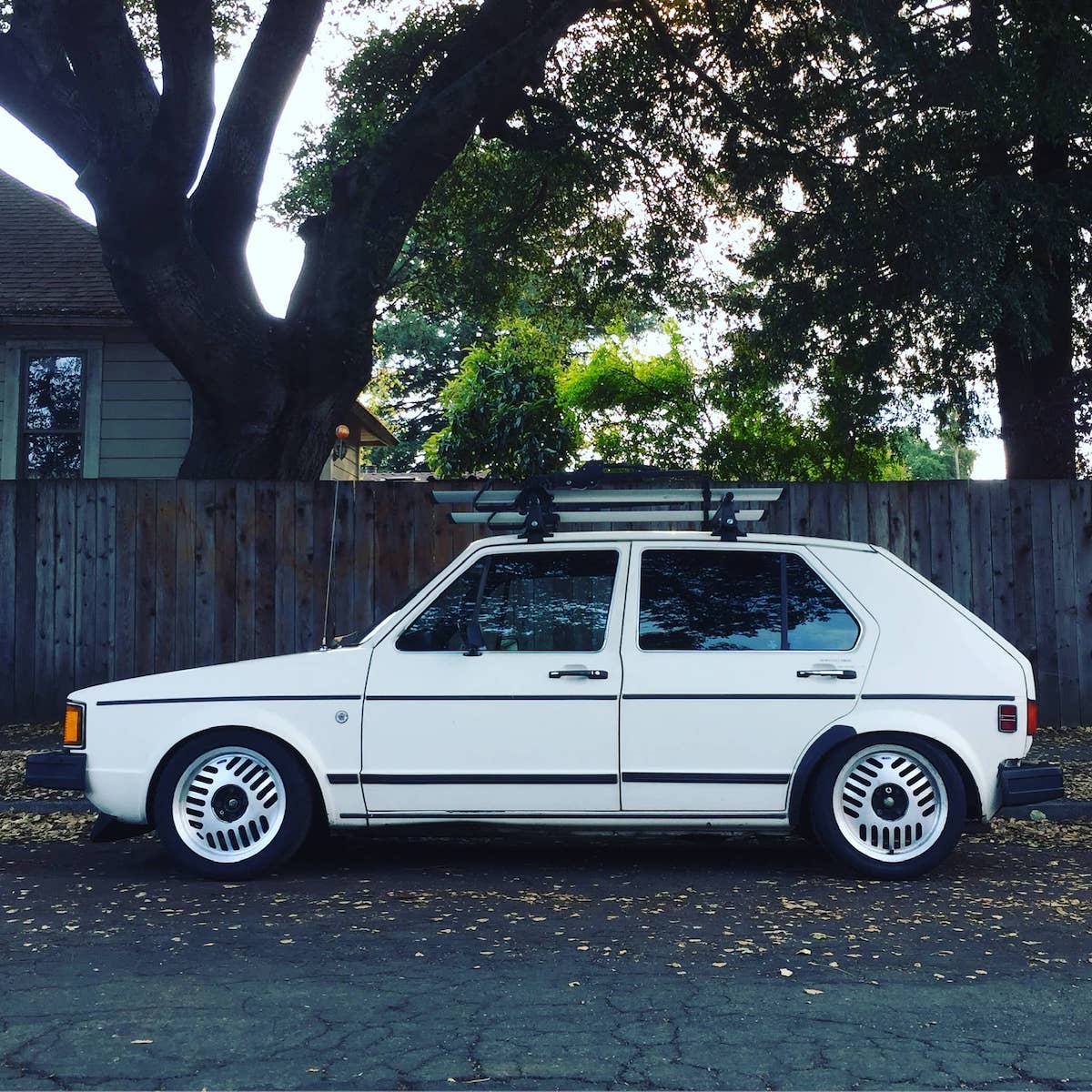 Our “Cashmere White” hero was one of the final Rabbits to be built at the Volkswagen factory in Westmoreland, Pennsylvania
© Dave DeBuono

The Rabbit’s life initially started slowly. Sales were gradual, and it wasn’t until 1978, when VW North America began manufacturing Rabbits at its newly-opened Westmoreland plant in Pennsylvania that the Rabbit hopped out of the hutch and sprung its way into the hearts of car enthusiasts stateside.

With its wedgy, cottontail hatchback design penned by Giugiaro and thrifty fuel economy, the nimble Rabbit was the antidote to anything the bulk of American car buyers had seen before. What’s more, it was named after the cutest and most endearing of animals, the rabbit… not the Golf; a sport described by Mark Twain as “a good walk ruined.”

“I Didn’t Choose The Rabbit, The Rabbit Chose Me! [...] I’m So Glad I Made The Decision And “Followed The White Rabbit” So To Speak!”

To understand why the Rabbit was - and still is! - such a beloved icon on the US car scene, Dyler.com contacted Dave DeBuono, a VW enthusiast who goes under the name @dave_debicycle on Instagram and happens to own a 1984 Mk1 Rabbit. And a Mk2 Golf. And a Mk4 Golf.

If you’ll excuse another self-indulgent literary reference, Dave’s journey from casual onlooker to full-on rabbit fancier happened when he quite literally followed the white rabbit - he followed an unlikely clue and found himself amidst an extraordinary situation that altered his life forever. 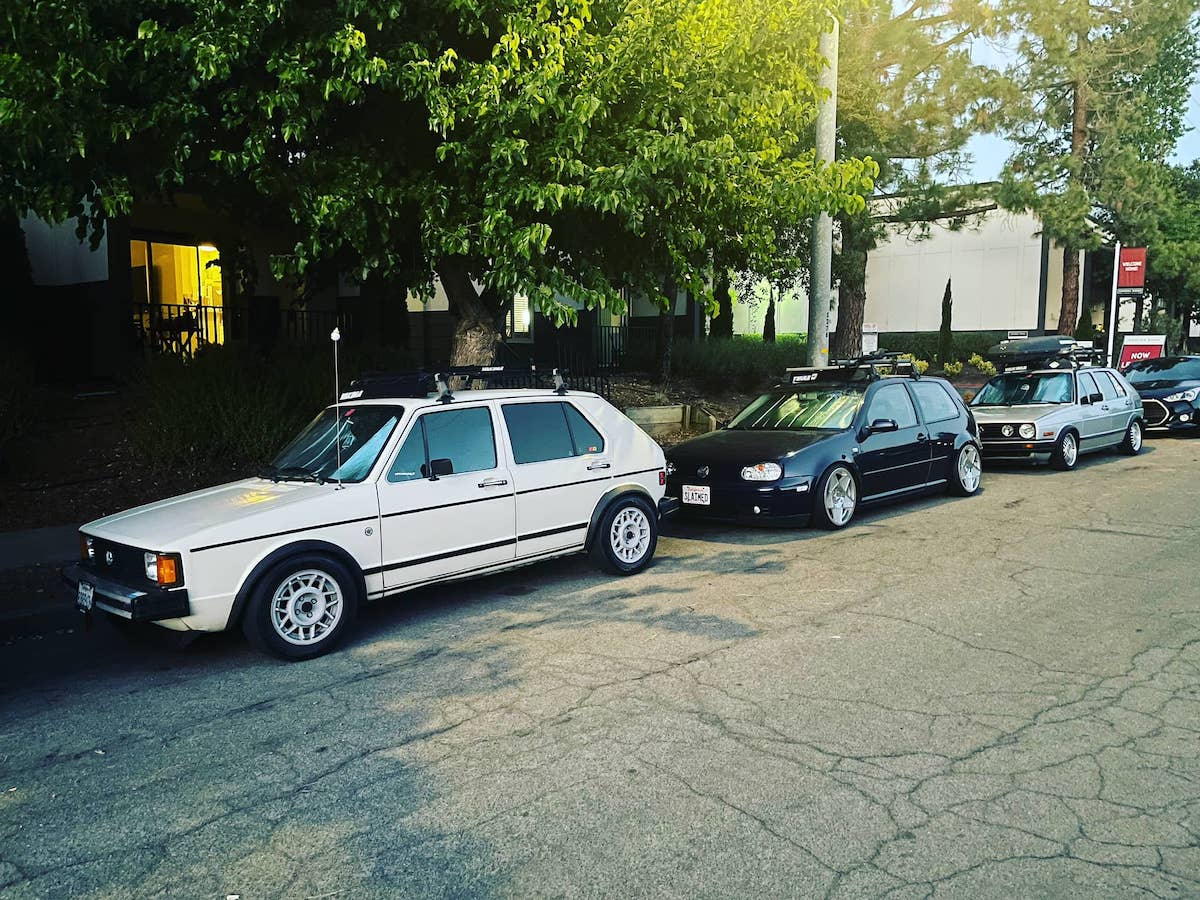 A thing for Rabbits
© Dave DeBuono

Via an Instagram group chat in January 2019, Dave was sent a link to what would become his white Rabbit, a 1984 Cashmere White “Westmoreland” 1.7L; one of the entry-level cars manufactured at the Westmoreland plant during the Rabbit’s final year of production; a “Late Westy” in Rabbit speak.

“Honestly, I didn’t choose the Rabbit, the Rabbit chose me!” Dave explains via - you got it! - Instagram. “I wasn’t looking for one, because at that time I was looking for another Mk4 to daily. However, I’d always wanted a Rabbit and our schedules aligned.

“I went out for a test drive with $1,500 dollars in my pocket, and I drove home a classic old rattling square box of fun. I just couldn’t help myself, but I’m so glad I made the decision and “followed the white Rabbit” so to speak!”

“The First Thing You Should Expect When Buying A Rabbit Is A Big Ol’ Grin And Some Bloody Knuckles!”

“A Volkswagen enthusiast through-and-through” Dave’s lack of pretence in relation to rabbitry is contageous. In Europe, the prevailing mindset amongst car enthusiasts is “buy the best you can or don’t bother at all.” Stateside - amongst VW aficionados at least - attitudes seem to be the complete opposite.

“Since I bought the Rabbit, it’s been a learning experience and I’m still asking more questions than I’m answering,” he says. “The first thing you should expect when buying a Rabbit is a big ol’ grin and some bloody knuckles. Expect some parts to be hard to find, expect the reverse light cover to be missing on long tail-lights to be missing. 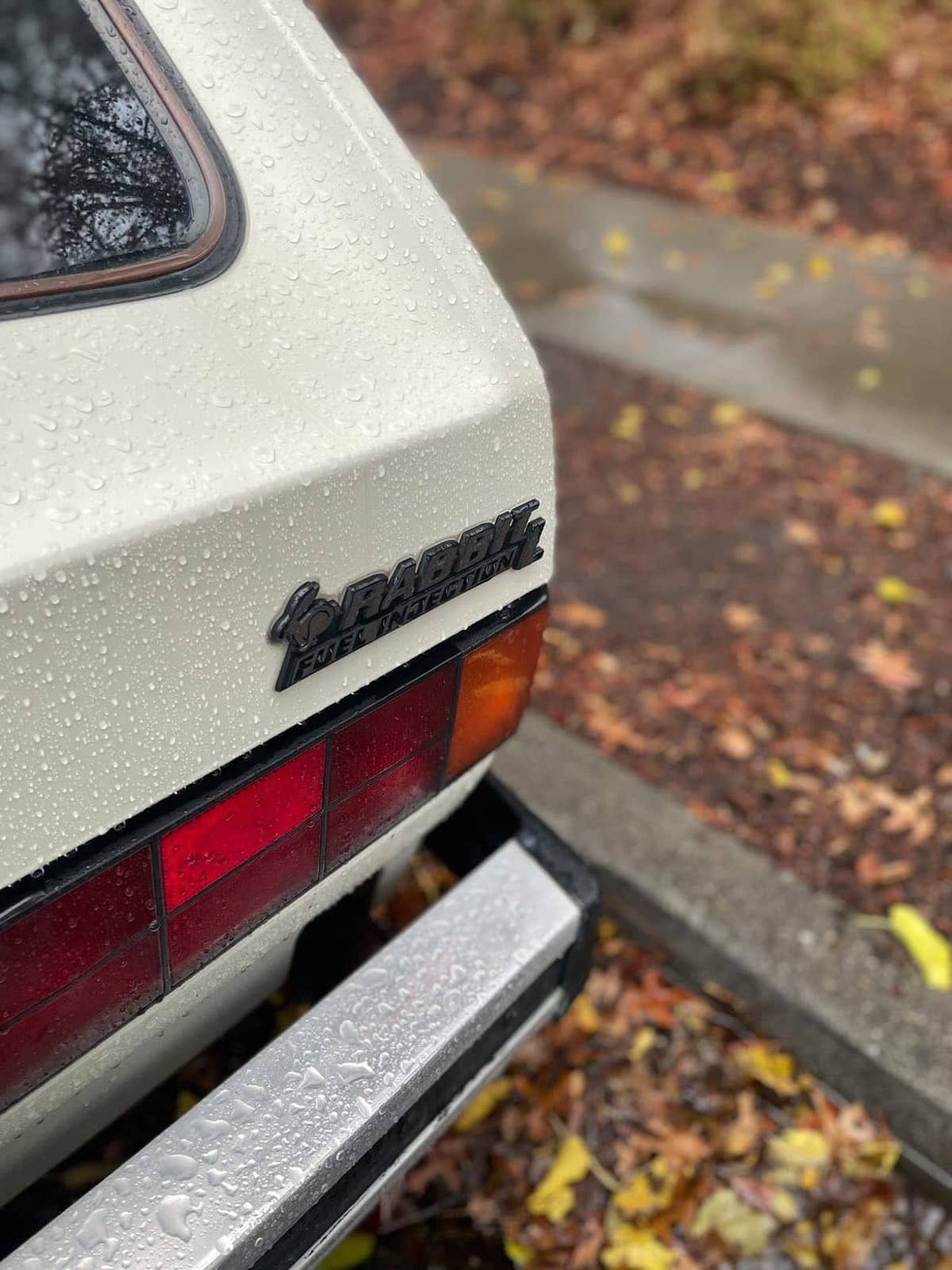 “I’ve put a lot of work into mine both for fun and necessity - it was promptly lowered on widened steelies and a simple muffler brought out the pops on deceleration, it’s just a blast to drive. With what I’ve spent on it in terms of repairs and modifications, it’s the $1,500, $5,000 Rabbit!

“Since January 2019 when I bought the car, the community embraced me and the white Rabbit from the off. I've met many people I’d call my friends through Mk1 ownership - many of these friendships were forged online, and most of that was through asking for help and having questions.

“Everything will have its gatekeepers but there’s a type of person who understands the Rabbit; someone looking for some fun and joy in their life - along with some self-inflicted suffering! - and when you see another one, you can’t help but say “me too!” and strike up a chat about these wonderful little hatches.”

“The Best Rabbit Is The One You End Up With, It Doesn’t Matter How Much It Cost And What Model It Is!”

What’s interesting is that Dave has not mentioned the Rabbit GTI; the car that kicked off the hot-hatch phenomenon and remains the holy grail amidst the fluffle. The GTI’s absence here is all down to economics, and nothing to do with performance.

Whilst the price for a Mk1 Rabbit GTI has dropped from the $30k high of several years ago, the starting cost for a driveable spicy bunny is still in double figures. Around the $13k mark upwards, to be precise.

For now, however, a “running and driving” non-GTI Rabbit can be had for anything between $3,000 - $5,000. As with anything, “there’s deals to be found if you look around and keep your eyes open.” 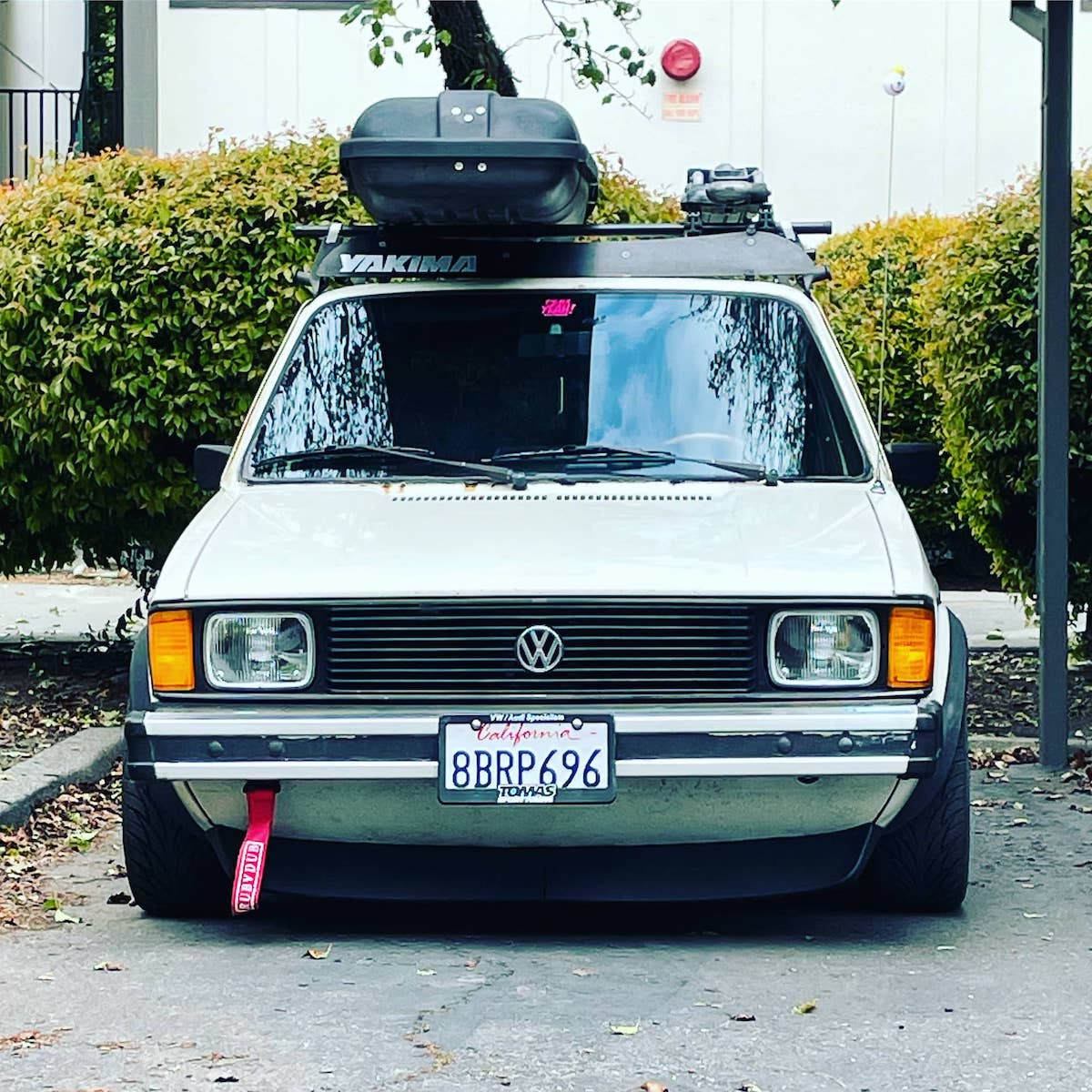 “It starts like a champ and I never hesitate to take it for a cruise or to work!”
© Dave DeBuono

“The 1.7-litre eight-valve petrol engine in my car has 75bhp and a 0-60mph time that’s absolutely nothing to brag about - in fact, it’s around 13 seconds,” Dave continues.

“However, any Rabbit is a blast to drive, and it doesn’t bother me in the slightest that it’s not a GTI. The best Rabbit is whatever one you end up with, it doesn’t matter how much it costs and what model it is; drive what you got and modify it how you want - at the end of the day, it’s all about whatever has the most smiles per-gallon!”

If you’ve got this far, you’ll have noticed how easy it is to romanticise the Volkswagen Rabbit. However, this is a car website, and Dave is eager to outline what to be aware of before venturing down the rabbit hole.

“You have to remember that these Mk1 Rabbits are now 40-years-old or more, so whilst they were fitted with the cutting-edge technologies of the day, they won’t last forever,” he stresses. 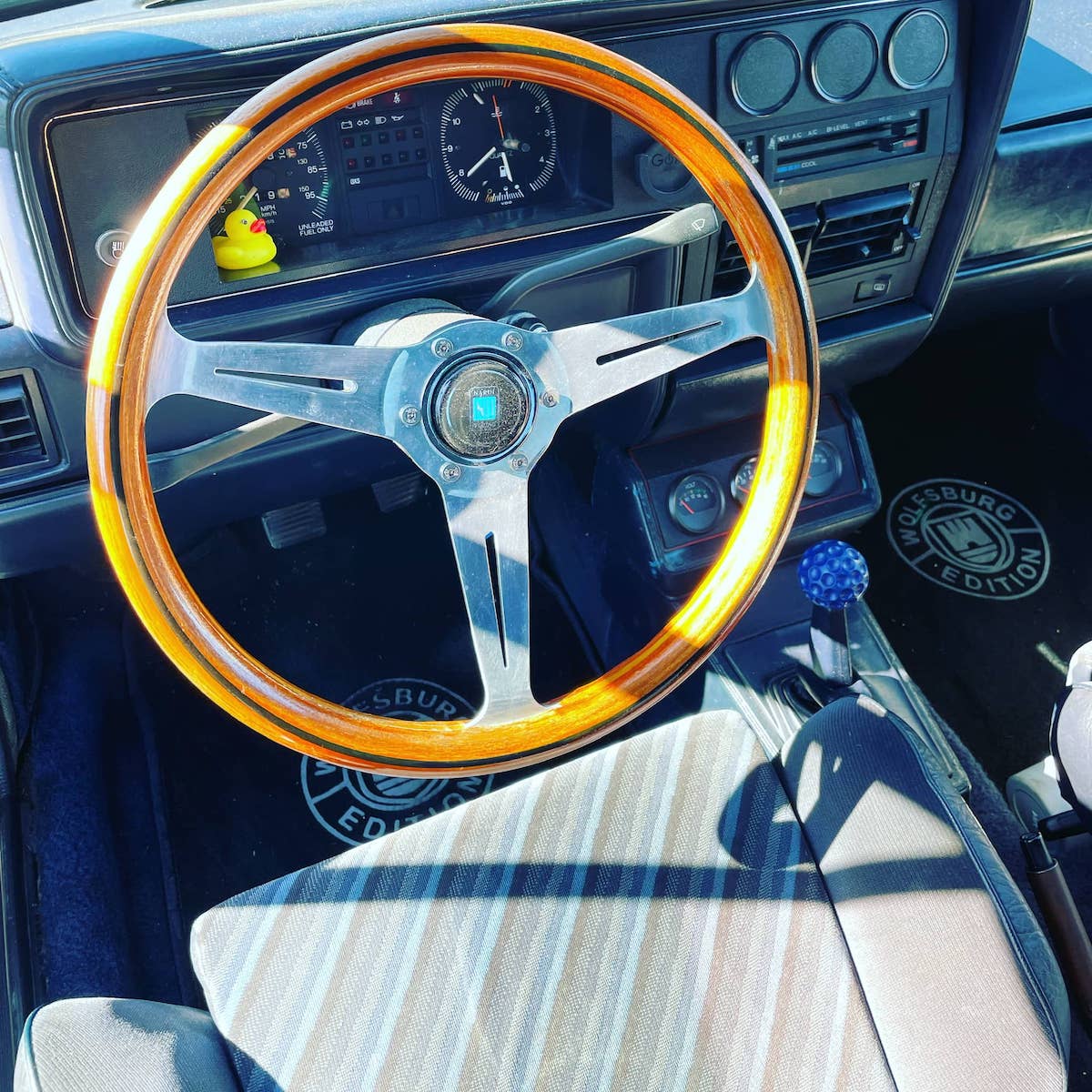 “If you’re looking to get anywhere on time, grab groceries, or give anyone a ride anywhere, an actual pet rabbit just doesn’t have the functionality of a VW Rabbit!”
© Dave DeBuono

“Alongside checking the usual crucial places for rust, be aware that the Rabbit has either a diesel or a petrol engine with CIS mechanical fuel injection and when it works, it’s great - when it doesn’t, it can get tricky and quite expensive.

“The CIS is something I fell foul to on my car, so I need to thank Tomas Sport Tuning in Berkeley for helping me out there! If you’re worried, I’d really advise you take your car to someone well-versed in CIS to save you a lot of headaches.”

“If You Say Rabbit To Any VW Or Car Enthusiast, Everyone Immediately Knows What You’re Talking About”

By now, Dave has made a robust case for the Mk1 Volkswagen Rabbit being the ideal classic car for pretty much anyone - you can pick a running rabbit up for less than $5k, it’s “more practical than a real rabbit”, it’s fun to drive, and given the right love and attention it deserves, it can still be used as a daily driver.

Between 1975 and 1984, Volkswagen sold approximately 1.5 millions Rabbits across North America. Unsurprisingly then, “everyone has a Rabbit story” and Dave maintains that this common link is what binds the Brotherhood of Rabbit.

“When VW North America dropped the Rabbit nameplate in favour of Golf for the Mk2, that really made Rabbits a thing because the Rabbit era ended not that long after it started,” he explains. 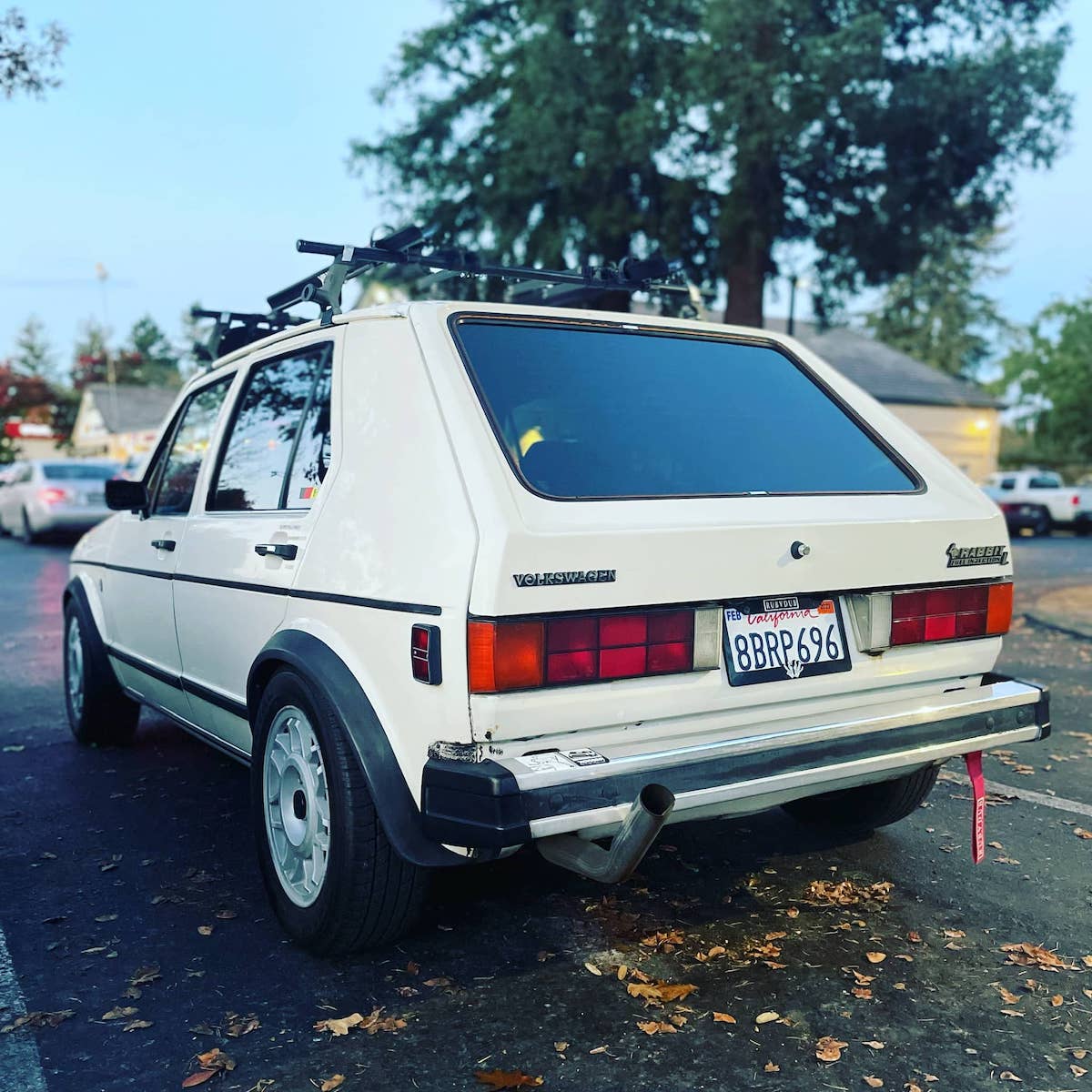 “If you say ‘Rabbit’ to any VW or car enthusiast, everyone immediately knows what you’re talking about, and because it was a superfluous economy car of its day, many older folks have a memory of one from childhood or from growing up. In fact, when you could buy a used one for $300 or $500 dollars, plenty of people had a Rabbit as their first car.”

To underline the timeless, feel-good nature of the Rabbit, Dave recounts a recent anecdote.

“Earlier this week, a Mk1 Rabbit went past as I was pulling on to the road to go to work in the Mk4. “When I caught up with it at the stop lights, I put the window down and said: “Hey, nice Rabbit! I have one too!” It was a little old couple driving, and the lady on my side rolled down her window and replied: “Aren’t they just great?! We’ve had ours the whole time and we’re never getting rid of it.” When I got my one, the elderly lady who lives opposite me was also super keen to talk about how she had a diesel Rabbit back in the day.” 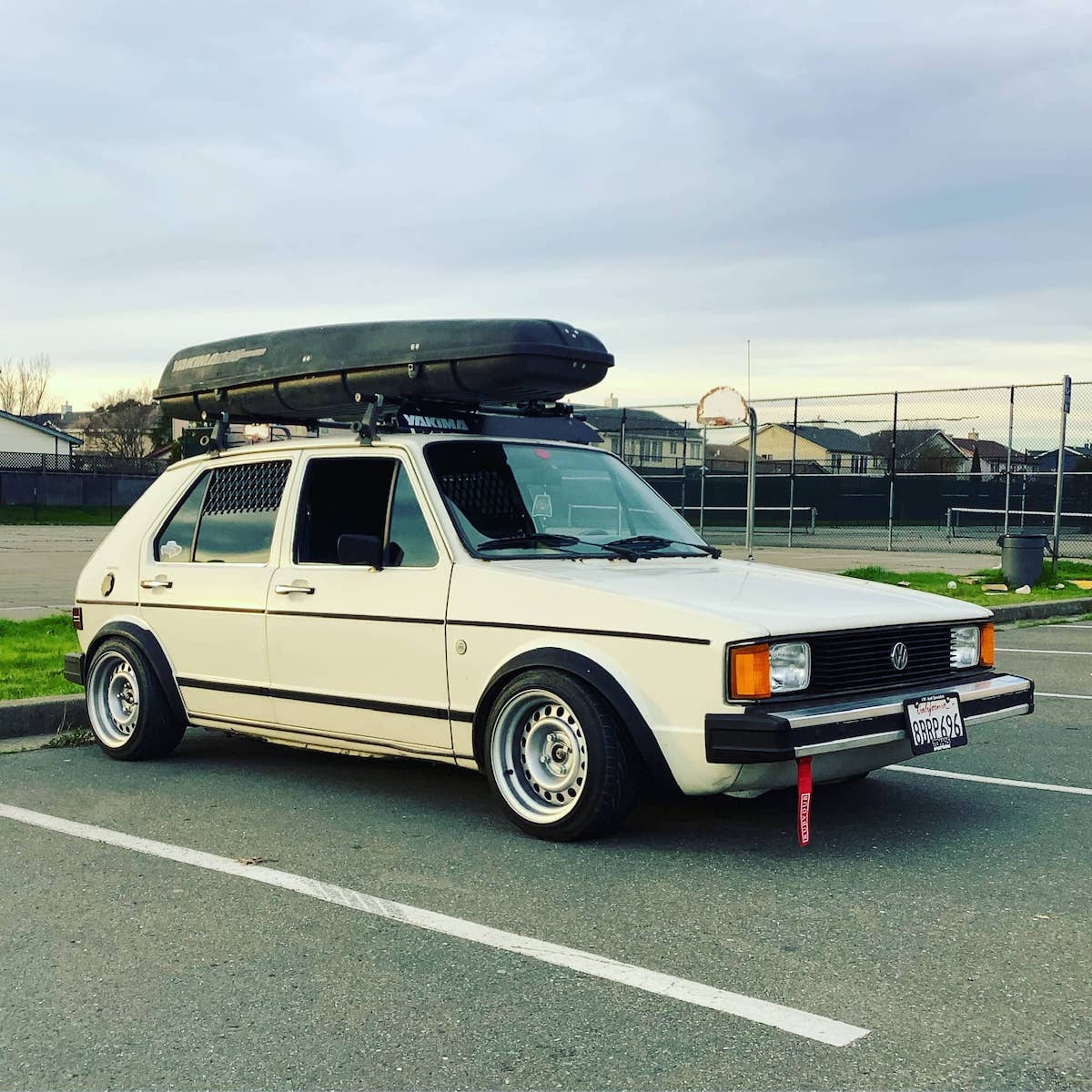 It’s a perfect segue into the end of what’s been one of the most uplifting car conversations of a very strange year, andi it begs the all-important question: is it worth buying one of these charming little cult classic hutchbacks?

“Yeah, absolutely!” Dave replies promptly. “The Rabbit is a happy little car down to a tee. You can drive the piss out of it, and use the whole car to the max of its abilities on your daily drive to work - there’s no tachymetre, just happy revs and pops on decel whilst ripping through some backroads.

“Don’t let them collect dust, drive ‘em while ya got ‘em. With the future of the Internal Combustion Engine uncertain and electric cars abound, the future is unclear. I say let ‘em rip.”

Do it. Don’t be late. Follow the White Rabbit.

To hop into Dave’s world of VW Rabbit ownership, follow him on Instagram by clicking here. He is also the founder of the Mod Meet Santa Rosa, which brings classic VW and Euro cars and their owners together on the first Friday of each month. Click these yellow words to check it out!

If you are ready to jump into the world of the Volkswagen Rabbit / the Volkswagen Golf, then click these yellow words to browse the ones we have for sale on Dyler.com.