In recent years, there’s been somewhat of a love in with Scandinavian living philosophies.

If you’re not averse to thumbing through the lifestyle pages on a Sunday, you’ll know that during the mid 2010s, hygge - the Danish concept of warmth and coziness - was all the rage. Fast-forward to 2021, and ‘lagom’ - neighbouring Sweden’s idea of “the right amount” - is now where it’s at.

The idea of something being neither too much nor too little has also managed to manifest itself within the automotive world. On the face of things, the Polestar 2 - Sweden’s first full EV - is peak lagom.

Unlike the cars made by a certain American EV manufacturer whose name and owner I cannot for the life of me remember, the 402bhp (or 300kW in electric car talk) Swedish fastback goes about its business in a quiet and thoughtful manner - it’s good looking without trying too hard; it’s fast without being solely geared towards numbers; it just gets on with being a bloody good, obsessively engineered electric car.

In fact, I’d go as far to say that the meticulously developed and designed Polestar 2 is an extension of what is seen to be a Swedish national trait - striving to be the best without making a scene about it.

With the cultural flex out of the way, cast your mind back a few weeks to the Goodwood Festival of Speed, an event which brings together the great and the good from the automotive industry and the glamorous world of motorsport. 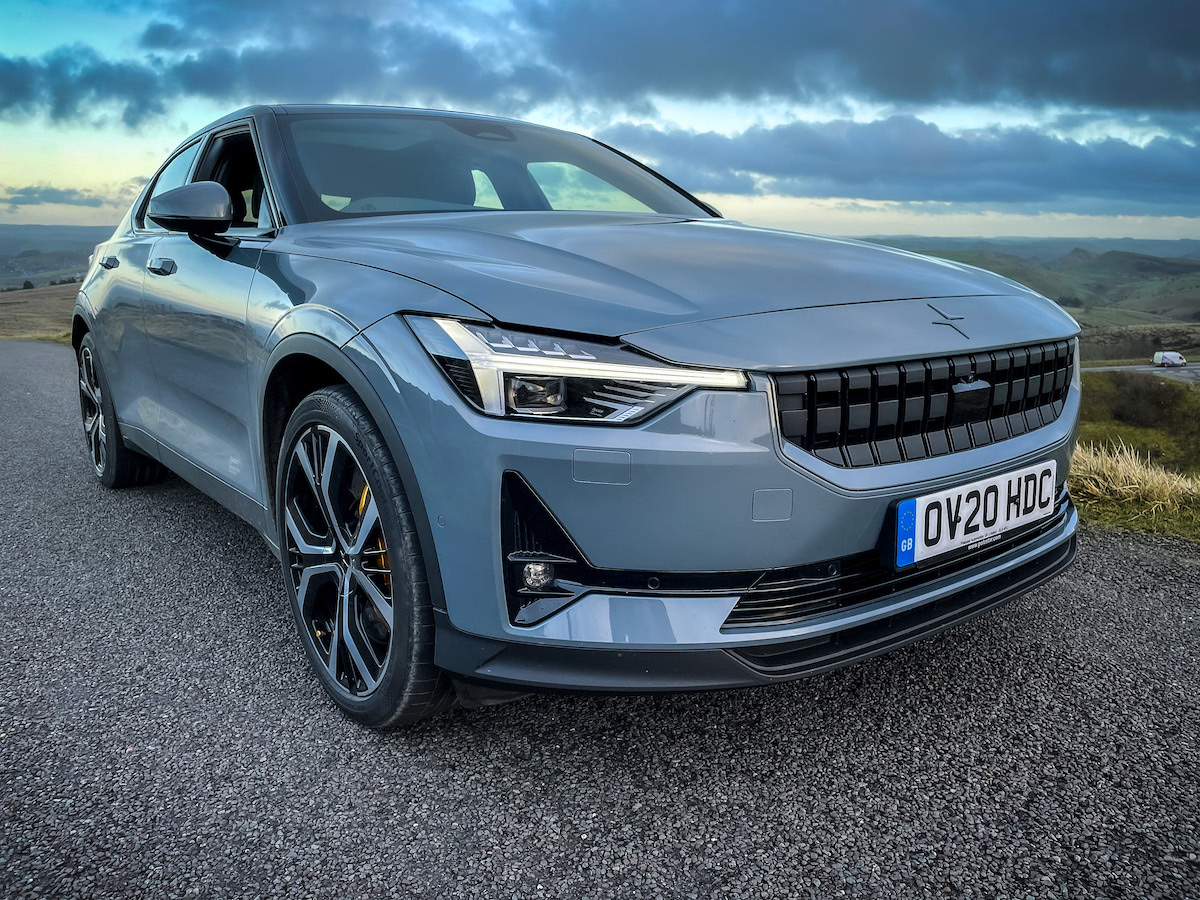 Dyler had the pleasure of experiencing the Polestar 2 last December in Britain’s Peak District and yes, it really is that good
© @TasKitasBritas/Dyler

On what is usually a scorching hot July weekend in the expansive grounds of the Goodwood Estate down in West Sussex, car manufacturers display their latest and greatest creations, and us mere mortals get to meet our motorsport heroes who we grew up watching - and still watch - as wide-eyed kids and adults on a screen.

Yet for every Sébastien Loeb or Lando Norris at FoS, there’s a dozen engineers and test drivers who despite making the magic happen, are criminally overlooked. One such character is Joakim Rydholm, Polestar’s Senior Chassis Development Engineer who is almost single-handedly responsible for the development and highly-praised handling of the Polestar 2.

Standing under the Polestar awning at FoS, the kindly, softly-spoken Rydholm is talking me through the brand’s “Goodwood Special”; the aptly named Experimental Polestar 2, which is a one-off, high-performance version of the award-winning Polestar 2 you or I could go and buy off the shelf today.

Wider in stance, and more aggressive looking than the regular car thanks to a raft of mechanical upgrades we’ll get to later, Rydholm explains that the Experimental Polestar 2 is the result of what happened when he was asked by Polestar CEO, Thomas Ingenlath, to create the best performance version possible of its all-electric fastback, without compromising the original’s comfort and reliability.

“To be honest, this Experimental Polestar 2 is a case of “why not?” from our CEO,” Rydholm tells Dyler. “We’re pretty much a start-up in the automotive industry, so we are lucky enough to be able to play around and have some fun with what is possible with our cars.

“It’s quite cool when the CEO is just a phone call away and we’re just allowed to do things without having to go through different management layers as you would do in a larger car maker - we don’t see the point in making things complicated when they don’t need to be, and when it comes to creating the best possible version of our cars as possible, well, why not do that?” 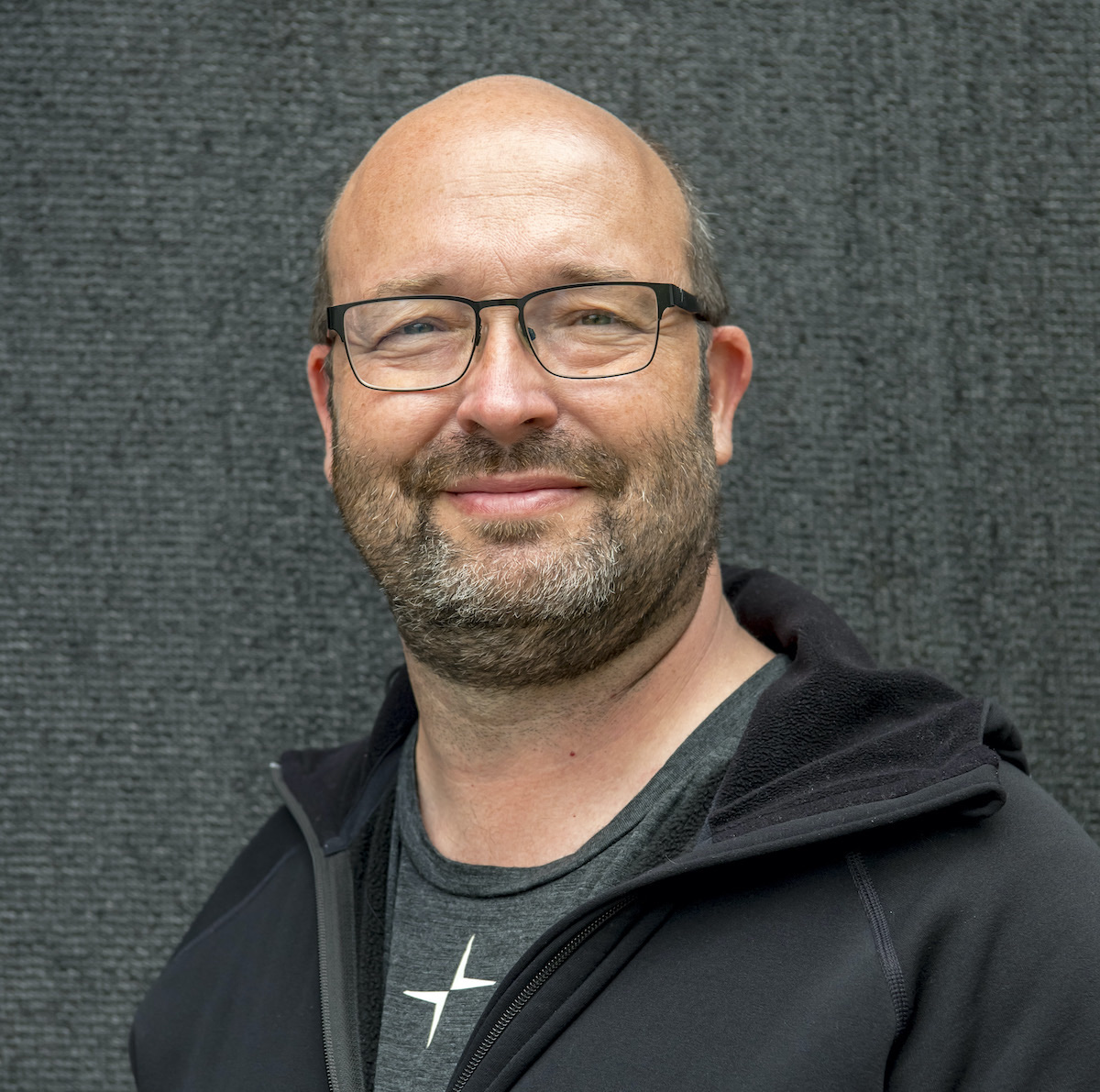 It’s this liberal train of thought, which saw Polestar choose this year’s Festival of Speed as the location to launch its experimental model. After all, it could have gone for any of the other major car shows on the automotive calendar to showcase the long-range, 476bhp (350kW) Experimental Polestar 2, right?

Yet given that Rydholm debuted the first driving prototype of the Polestar 1 - the brand’s electric performance hybrid GT - at FoS 2018, well, why not? It makes perfect sense to use one of the world’s best-loved events to showcase the best you can do.

In what is both a practical move in terms of performance to cope with the extra 74bhp, and a wholesome nod to the history books, the Experimental Polestar 2 is fitted with the 21-inch wheels, bespoke Pirelli tyres, and six-piston brakes from its fully-carbon fibre big brother.

In his quest to achieve “Peak Polestar 2”, Rydholm also borrowed the carbon fibre front suspension strut bar from the Volvo S60 Polestar Engineered to increase the rigidity of the electric car’s chassis.

Blink, and here’s why you’ll have almost missed the 476bhp Experimental Polestar 2

Yet everything about the Experimental Polestar 2 launch at FoS was done in a very Swedish, very gimmick-free way. Had you not read any FoS previews or related news, then well, it was almost a case of blink and you’ll miss it.

The low-key reveal begged the question of whether the Polestar 2 is an automotive reflection of the Swedish personality - what makes a Polestar FEEL Swedish in the same way that a Toyota Century feels very Japanese, or a Ford Mustang is quintessentially American?

Thankfully, Rydholm is the right person to ask. Prior to joining Polestar in 2016, he spent nine years as one of Volvo Cars’ Development Engineers. From 1996 to 2007, he was “schooled” in the art of chassis integration and fine-tuning shock absorbers, springs, anti-roll bars, rims, and tyres at the now sadly-defunct SAAB.

Ultimately, the Polestar 2 is pretty much single handedly his creation in terms of handling and chassis dynamics. To admit that, however, would be very un-Swedish. So Rydholm doesn’t. 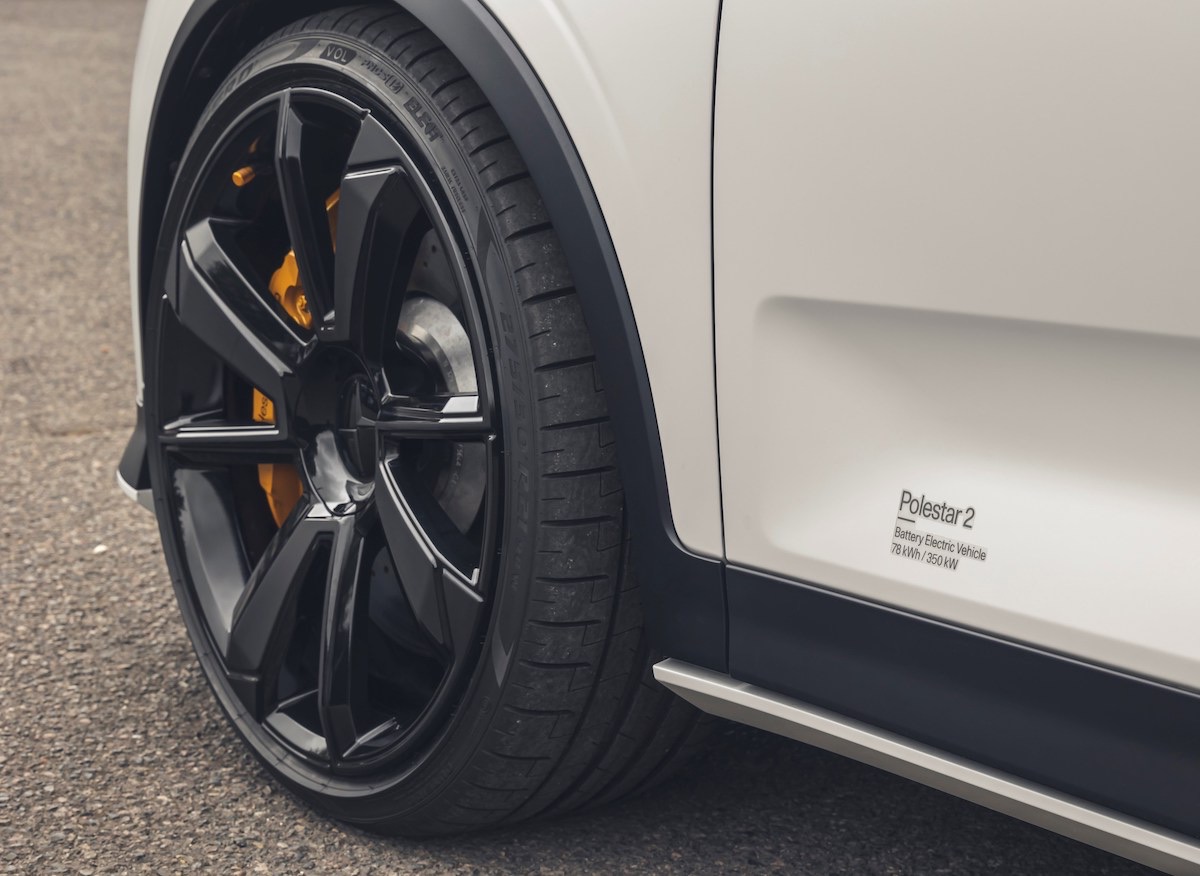 “I think the feeling of a true Swedish car can be found in its driving DNA,” he explains. “In our part of the world, there is a very big passion for driving and for motorsports. There is also a culture of perfection and doing things properly.

“I can say that as an engineer, we’re a really nerdy nation of perfectionists - we’ll spend hours, or even days agonising over tiny details, because every detail matters - there’s no such thing as “that’ll do” in Sweden!

“The most important thing - I believe - that when you’re developing a car, is that you should always have fun, but the driver should always feel confident, and always in control.

“With this car, the regular Polestar 2 and the experimental model, I’ve spent hundreds of hours going through hundreds of suspension and damper configurations, and I’ve been through similar amounts of time tweaking torque settings to get the right amount of feedback when you drive.

“For me, the car shouldn’t feel any different whether you’re driving on tarmac, gravel, or snow, or in wet or dry conditions.You shouldn’t be able to tell the difference between the conditions even if you are wearing a blindfold!”

So, does the Polestar 2 feel like a truly Swedish car and most importantly for 2021, is it lagom?

Before heading off to give Polestar’s FoS guests a taste of the brand’s electric DNA by taking them up the iconic 1.16 mile Goodwood hillclimb in his pet project, Rydholm is keen to point out that harmony within a vehicle’s chassis is what’s key to creating the best possible driving experience.

“There isn’t one single factor that makes a car great to drive,” he says. “Everything such as the tyre pressures, the wheel angles, the suspension geometry, the thickness of the anti-roll bars, and the roll centres all have to align perfectly - when you have all of these in harmony, then you have the purest driving DNA. 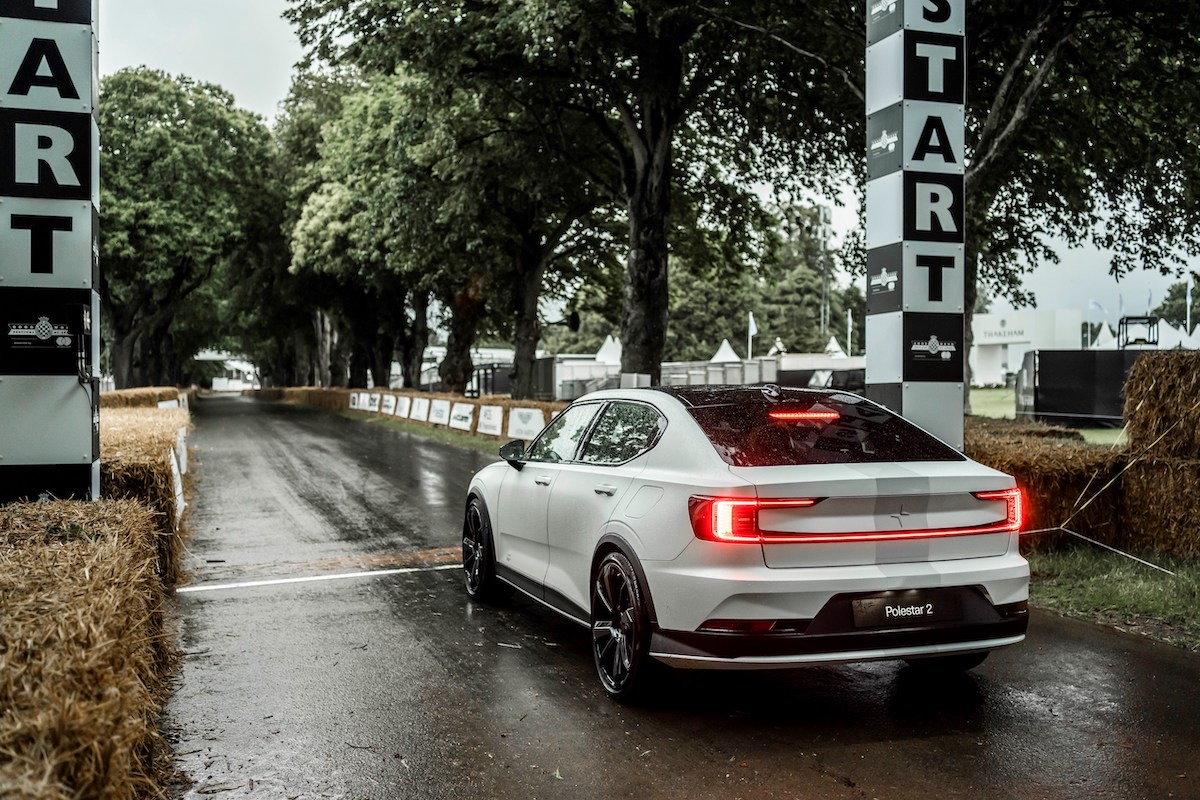 It may be very Swedish in character and design, but there is nothing lagom about the Polestar 2
© Polestar Press

“Factor in this Swedish obsessiveness for perfection with driving purity, then you have what I would say gives a car a Swedish character - this is what makes a Polestar a Polestar, and what makes a car Swedish.

“Just one last thing, though,” Rydholm concludes with a laugh.” There is nothing lagom about a Polestar, though - it’s something way beyond that!”

To take a look through the Swedish cars available for sale on Dyler, click these three words to browse the listings.