Celebrating Five Years of Polestar With The Enchanting And Ever So Geeky £140,000 Polestar 1 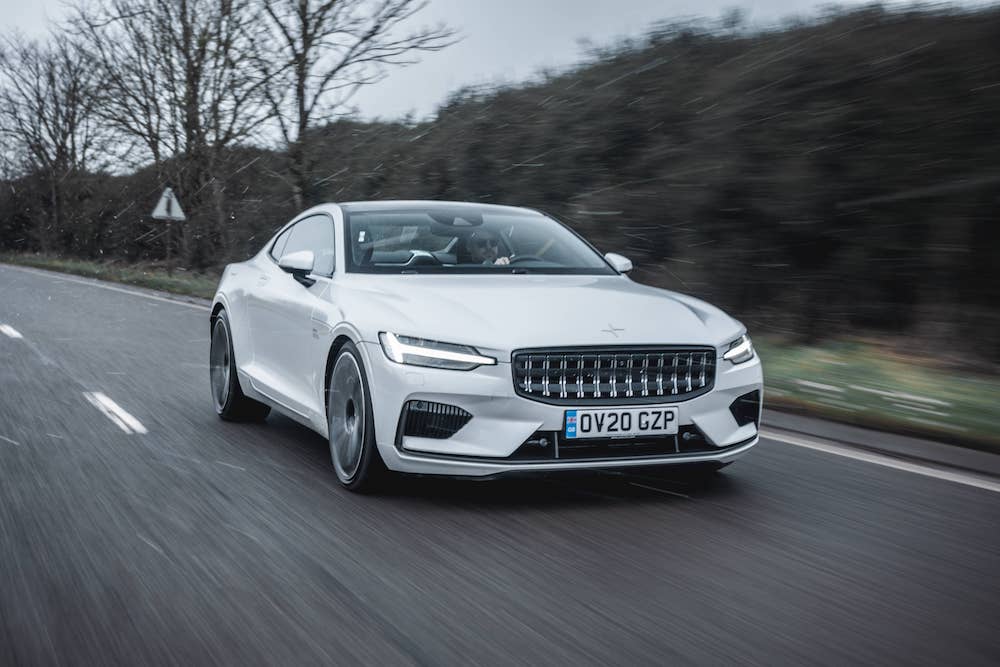 OV20 GZP - a ‘Snow’ white - Polestar 1 arrived on a typical bleak, Peak District day. The air was still, and hovering around the 0°C mark. Nothing unusual for this time of year - the sky resembles potato soup; the landscape a black and white Northern European symphony in frozen earth and packed-down snow.

Waiting outside where I live, I’m cold but giddy knowing that I’ll be spending a week with an intriguing, exclusive car that tends to slip under the radar. In fact, this Plug-In Hybrid GT is so rare, that just 1,500 of them were produced from 2019 to the end of 2021. 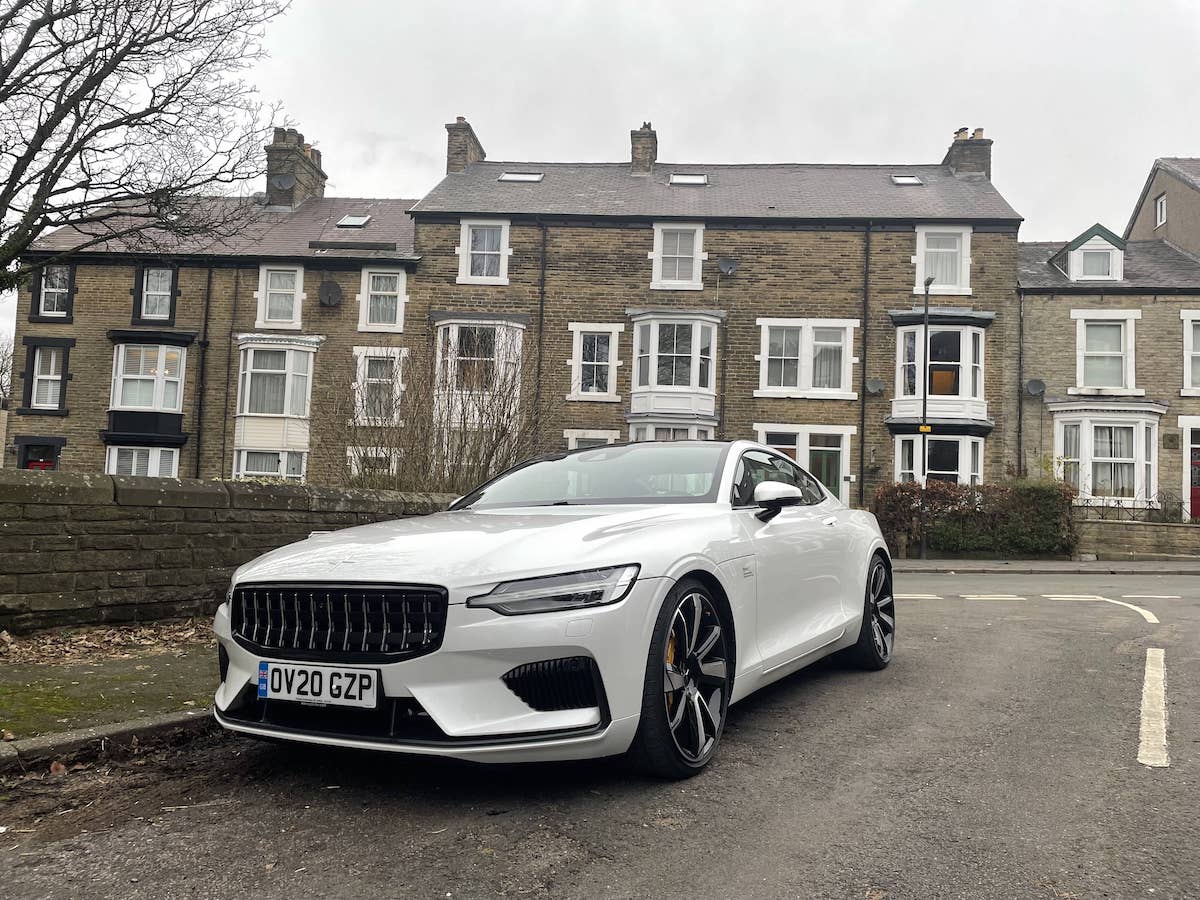 The Polestar 1 arrives and it’s been worth the wait
© Ignition Media/Dyler.com

The Polestar 1 appears outside my house silently - presumably by running on ‘Pure’ mode via its two electric motors - and immediately merges seamlessly with its monochrome surroundings.

Already, Sweden’s most intriguing car in years has surrounded itself with an ethereal presence that no other car I’ve ever seen or driven can muster. My mind reels with thoughts that I may be standing in front of something not of this world.

In car writing, it’s easy to bandy about a bunch of lazy adjectives to express how a car looks, but - and I write this description through reluctant fingers - the Polestar 1 is a genuinely beautiful car.

Its front end is inspired by Polestar’s parent company, Volvo, but the rest of the Polestar 1 easily pulls off the whole Swedish minimalism thing that has become the core of both brands’ design language.

Its chunky rear hips are a playful throwback to the Volvo P1800 coupé of the 1960s, and whilst the Polestar 1 is by no means a small car, it carries its 2,345kg without looking gawky. It is - to use yet another motoring writer’s cliché - “a wonderful looking thing.” 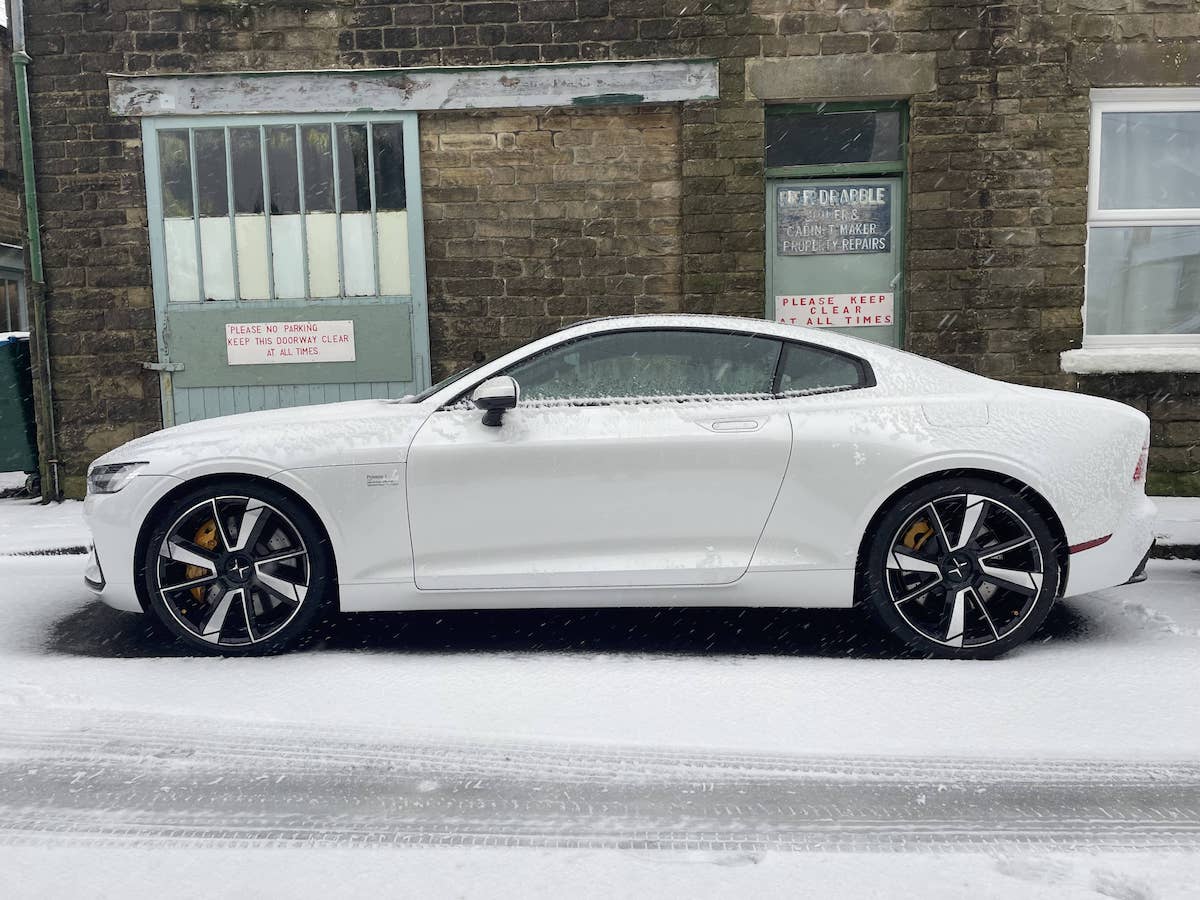 The Polestar 1 is driven by a turbocharged and supercharged 2.0L, 4-cylinder Volvo petrol engine with two electric motors - everything combined, the car makes 609bhp and 1,000Nm of torque
© Dyler.com

A Massively Clever Car Designed By Geeks For Geeks

Take to the road in the Polestar 1, and it becomes quickly apparent that it’s a car designed to evoke feelings. If you’re interested in Nürburgring laps or 0-60mph times, then stop reading now.

Polestar has a tendency to finish its cabins in darker, brooding concrete-esque colours, and the 1 is no exception. You sit low, and rapidly become absorbed into its surroundings fashioned from hand-stitched leather, carbon fibre, and stainless steel. It’s a chintz and gimmick free place to be, and it’s all put together in that lovely comforting way that Sweden does so well.

My first driving impression of the Polestar 1 was that it does not drive like a machine weighing almost 2.5 tonnes. It’s cerebral, relaxing, and in ‘Hybrid’ mode, the car combines good old internal combustion with an incredibly sophisticated hybrid system. It breezes along, quietly absorbing the crap roads of Northern England in a far softer manner than a £140,000, GT capable of almost 600bhp should do. There’s no other way of describing it than being well.. easy.

Yet on a B-Road, switch the car into ‘Power’ mode and things change. Quickly. The docile throttle response becomes sharper, the eight-speed auto ‘box shifts quicker, the turbocharger spins faster. Polestar 1’s soft spoken intellectual character has been replaced by someone who wants to fight you in a pub car park… 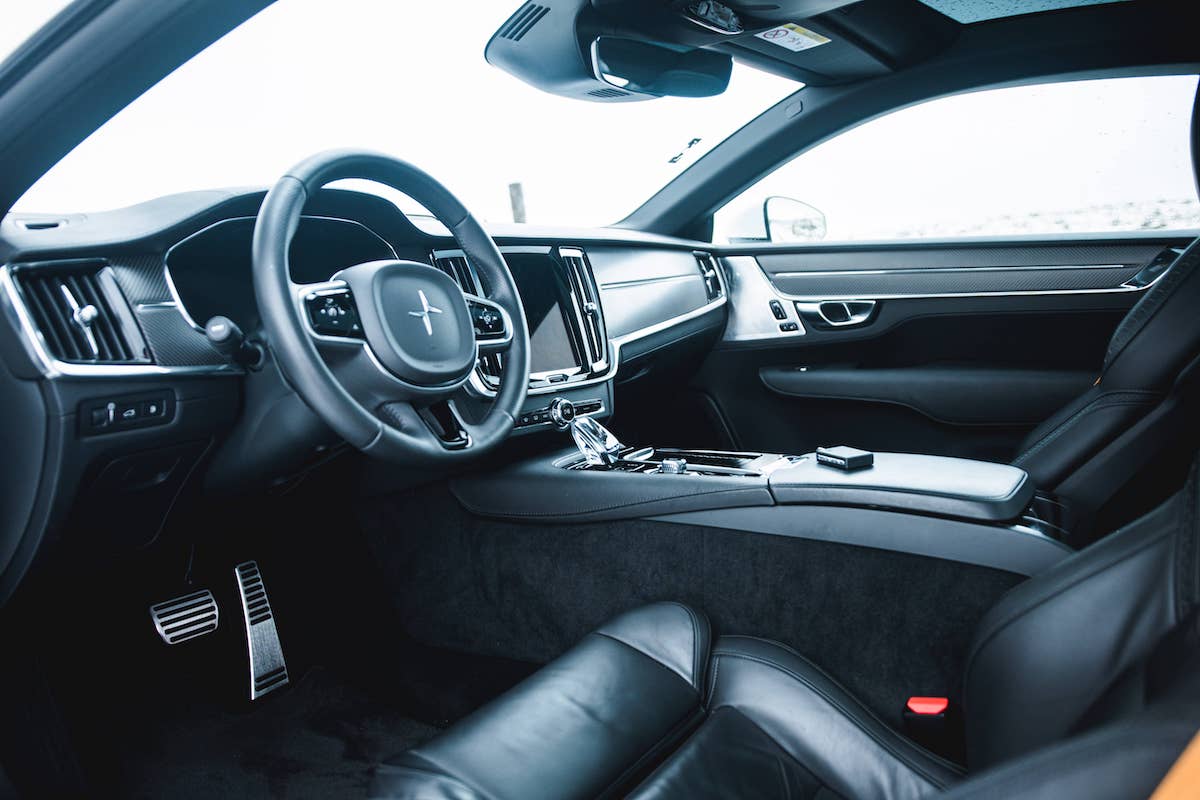 The cabin of the Polestar 1 is trimmed in the highest-quality leather, carbon fibre, and stainless steel. It’s snug, so you might struggle if you’re over 180cm tall!
© Ignition Media/Dyler.com

… and to be perfectly honest, ‘Power’ mode s**t me right up, because you end up doing Adult Speeds in a car that weighs the same as a small moon and I’m not Max Verstappen. Thank you Polestar for fitting six-piston Akebono brakes as standard. I understand this decision.

What I don’t understand is why Polestar chose to use the infotainment system from the Volvo S90 here. I won’t go into “but this is a £140,000 car” because Aston Martin uses components from the Mercedes-Benz parts bin and their Vantage costs around the same. I’m also not reviewing an Aston Martin. Yet I can’t skirt around the fact that the Polestar 1’s infotainment system is not great.

Here’s a few examples: to access the car’s energy flow system, you have to hit submenu after submenu, and when you manage to see how much electric magic your car is using, it’ll kick you out once again in about five minutes. The split-window format of the screen makes no logical sense in terms of legibility and - oh, First World Problems - Apple CarPlay didn’t connect to my phone entirely smoothly.

Thankfully, however, the Polestar 1’s Bower and Wilkins stereo was developed in conjunction with the Gothenburg City Philharmonic. It is aural nectar, and Apple CarPlay quickly became redundant when the stereo was combined with BBC Radio 6 Music… and ABBA, because everyone knows it’s International Law to listen to the Swedish supergroup whilst driving a Swedish car. Facts.

It was also the astonishingly over-engineered stereo that quickly made me realise that the Polestar 1 is a machine that has been made for geeks by geeks. A good friend of mine once said that “if geeks ruled the world, the world would be a happier place.” He is correct.

As we’re about to find out, geekiness is very much something that forms part of this fascinating machine’s personality. 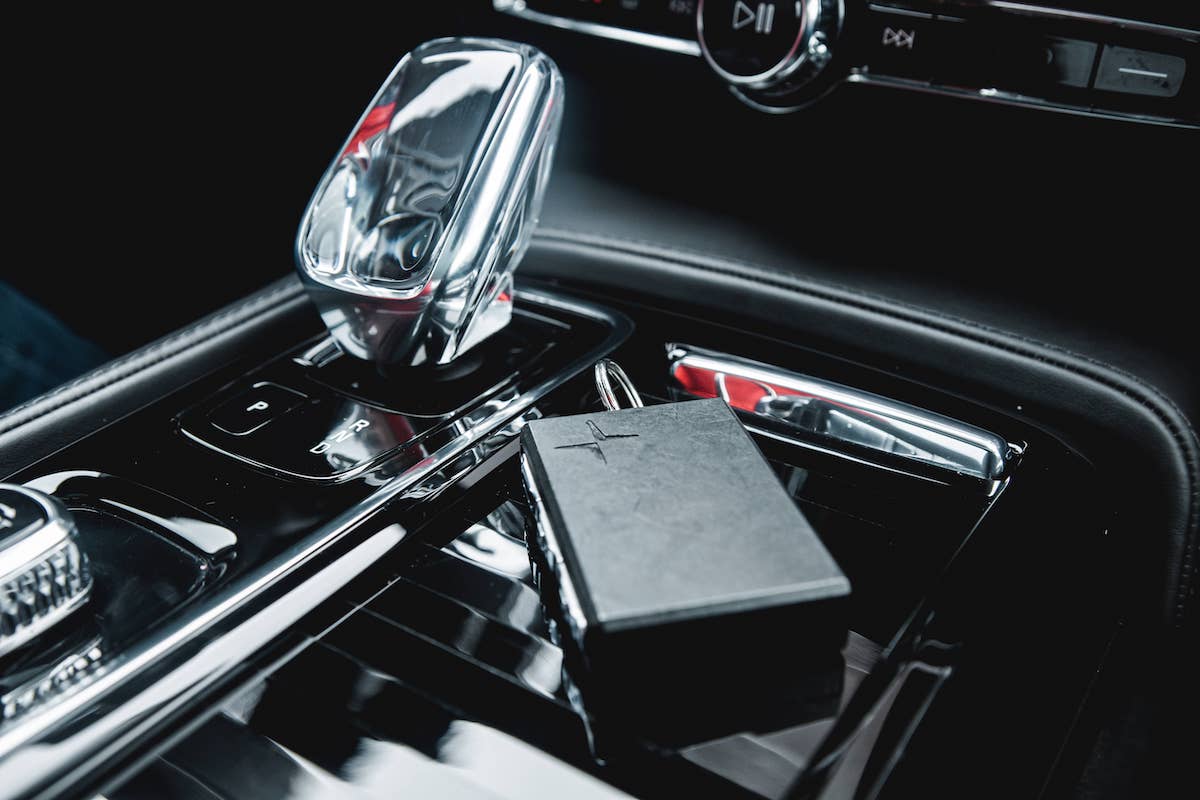 Yes, that gear shifter is crafted from genuine lead-free crystal from the Orrefors glass artisans in Sweden
© Ignition Media/Dyler.com

This £140,000 GT Easily Navigated The Biggest Blizzard The UK Has Seen In Years 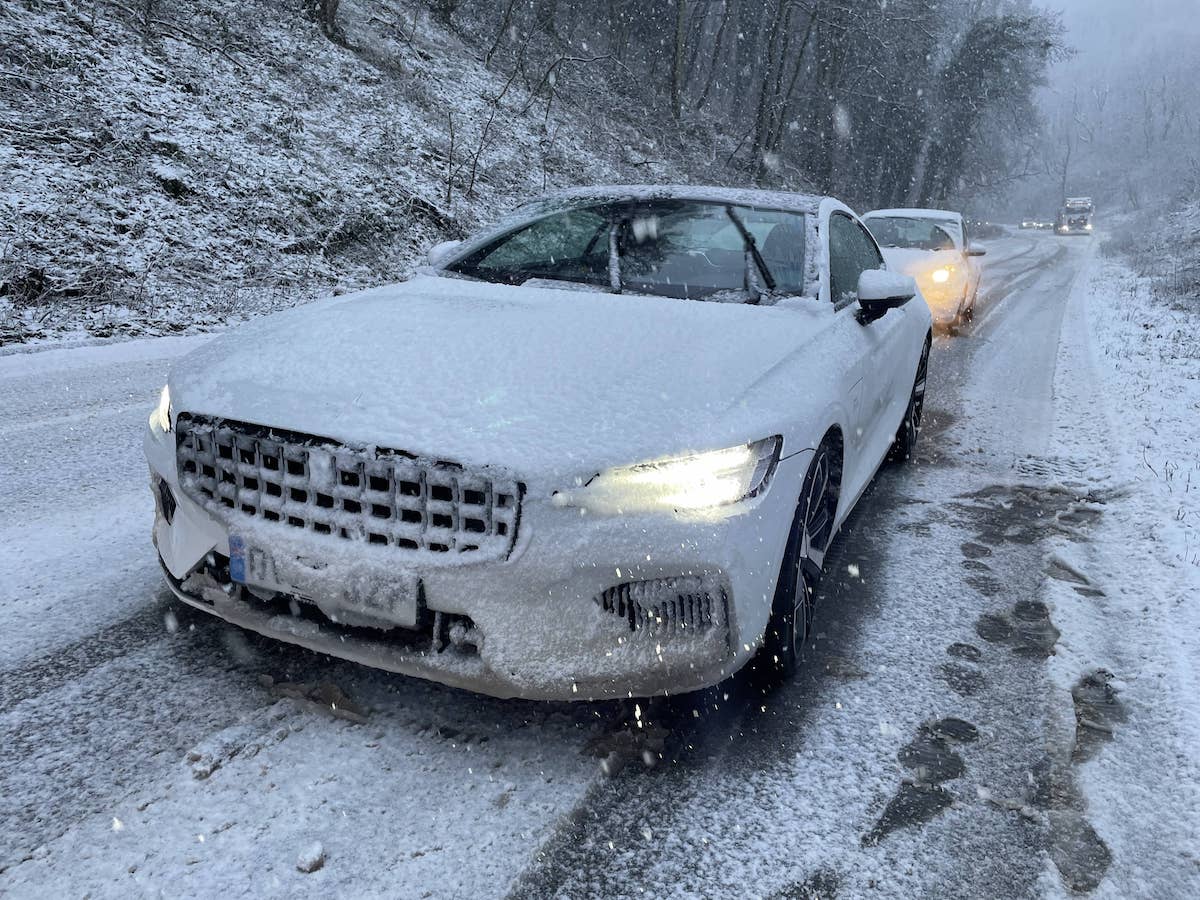 Thanks to its highly-sophisticated AWD system and rigorous testing in Northern Sweden, the Polestar 1 made easy work of this blizzard
© Ignition Media/Dyler.com

To provide context as to where the Polestar 1's geeky side comes from, we need to visit the 2021 Goodwood Festival of Speed. It was there that Dyler.com had the pleasure to speak to Joakim Rydholm - the Chief Test Engineer at Polestar.

This quiet - and frankly lovely - modest Swede is responsible for creating the DNA of a Polestar. Drive one, and you'll understand what I mean. Joakim is also considered by his colleagues at Polestar's 'Cube' HQ to be somewhat of a genius.

Again, "genius" - like "iconic" and "thing" - is an integral part of the motoring writer's handbook of bullshit that means pretty much nothing. Yet considering what the Polestar 1 did amidst one of the biggest snowstorms that Britain has seen in years, I'm inclined to describe Rydholm as being someone who is truly blessed with Big Brain Energy.

The whole snow shower started innocently enough. After all, let's not forget that Britain is a country that's been unable to do snow properly for years, so I switched the Polestar 1's driver setting from 'Hybrid' - that's the mode where the ICE and the electric motors work together and the AWD is deployed where necessary - into 'AWD', which ensures that all four wheels are being driven at all times with both engines running. 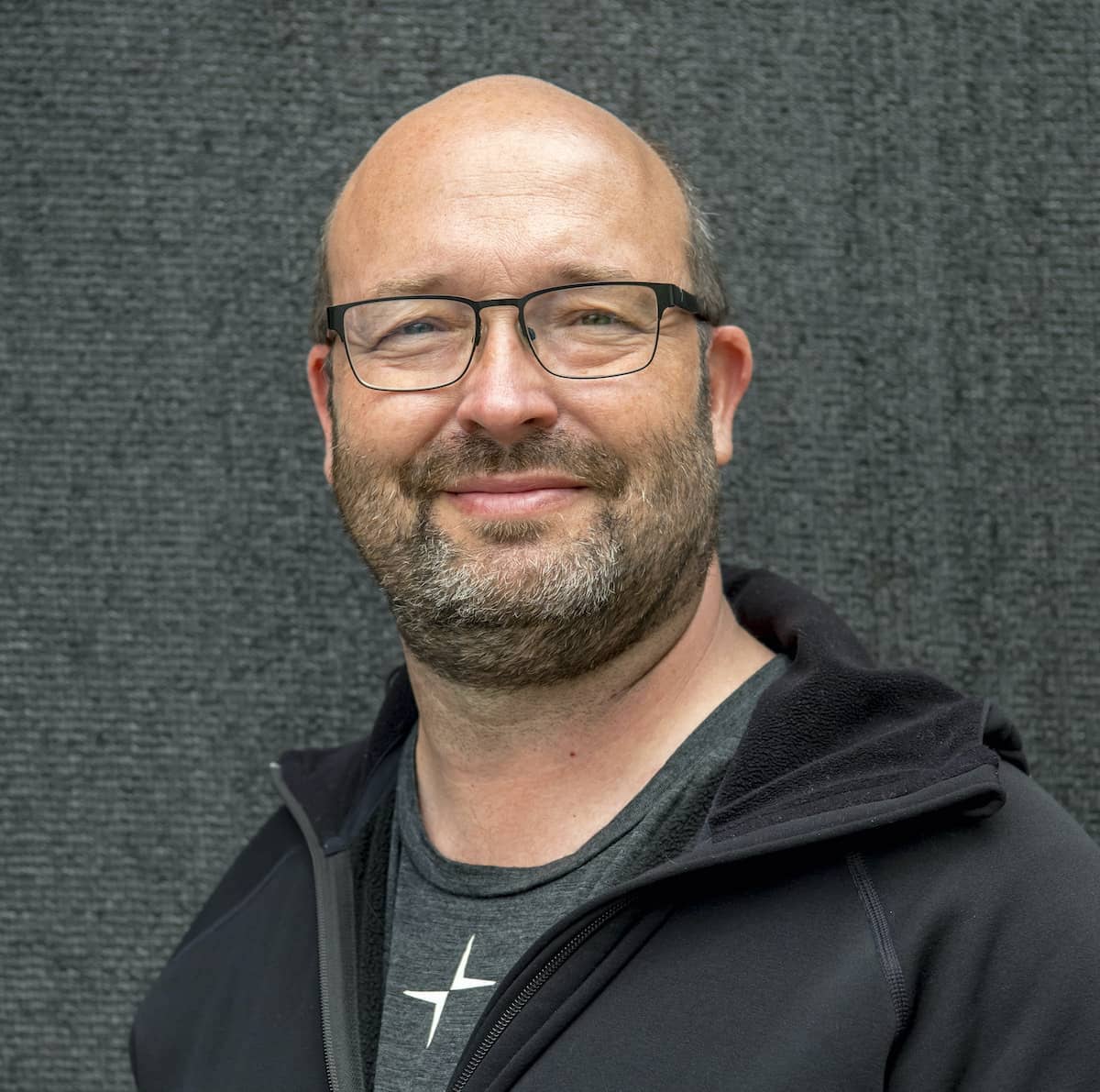 After all, who am I to argue with a car that's covered thousands of miles of testing in Sweden's frozen north and has been developed by a Swedish engineer? I convince myself that I will be home in time for dinner.

Then I begin to worry.

The snow falls heavier and the gloom descends. As the Polestar 1 begins its slow, eighth-gear climb up the hill that takes you to the town I live in, I begin to see more and more cars in ditches or simply stranded. I pull over to assess the situation. Do I stop and wait out the snow? After all, the cabin is a nice place to be and I could catch up on some TV via my phone. Or do I continue? It appears that I am able to carry on in what is now an extravagant, highly-engineered snow plough.

The slow climb restarts, and my eyes are on stalks as the car effortlessly reaches the crest of the hill. My ears are strained to their limit, as I listen for any possible creak or squeak the car makes. My fingers bulge as I grip the steering wheel attempting to feel for the tiniest of anomalies through the steering. I am now very much reminded that this car is not mine. It also costs six figures.

After having aged another 30 years and gained yet more grey hair, I reach the top of the hill where the road is being cleared of snow and ice. I step out of the car into the biting Peak District air to take in what just happened. It's just me in the Polestar 1 and a Range Rover.

I replay the events of the last hour or so in my mind's eye, and this hefty, PHEV GT with over 600bhp that was designed to cross continents with minimal effort has not just devoured a snowstorm, it's also made mincemeat of a Toyota FJ Cruiser, a brace of Subaru Foresters, and an Isuzu. 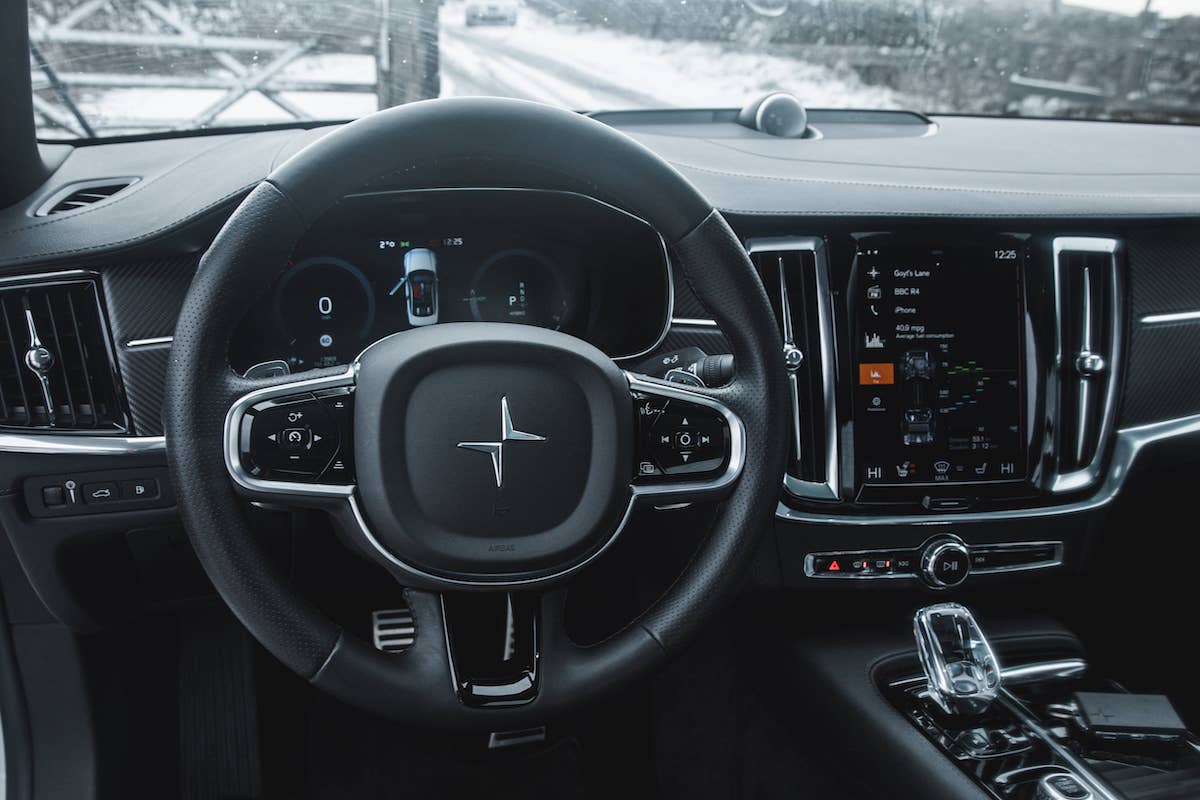 The fact it did it in such a quiet fuss-free manner was something that will remain with me, and I have goosebumps just thinking about that afternoon as I sit here writing this today. I still have this mental image of the Polestar 1 using all of its 609bhp and 1000Nm of torque to glide through the bleak, invariant winter landscape like some sort of automotive apparition - a White Ghost, if you will.

Finally in the clear, I get back in the car's cosseting, warm cabin, and I catch myself smiling as I begin the slow descent down the icy incline and into town. Moments like these are a great reminder of why we love cars in the first place, and how what is essentially a lump of metal (well, carbon fibre-reinforced polymer in the case of the Polestar 1, thanks!) can truly get under your skin.

I park up outside my flat and walk to the pub to bore my friends about the miracle that has just taken place and to declare Joakim Rydholm's genius. After my fifth pint I decide that the Polestar 1 is my mate and it will be so for life. 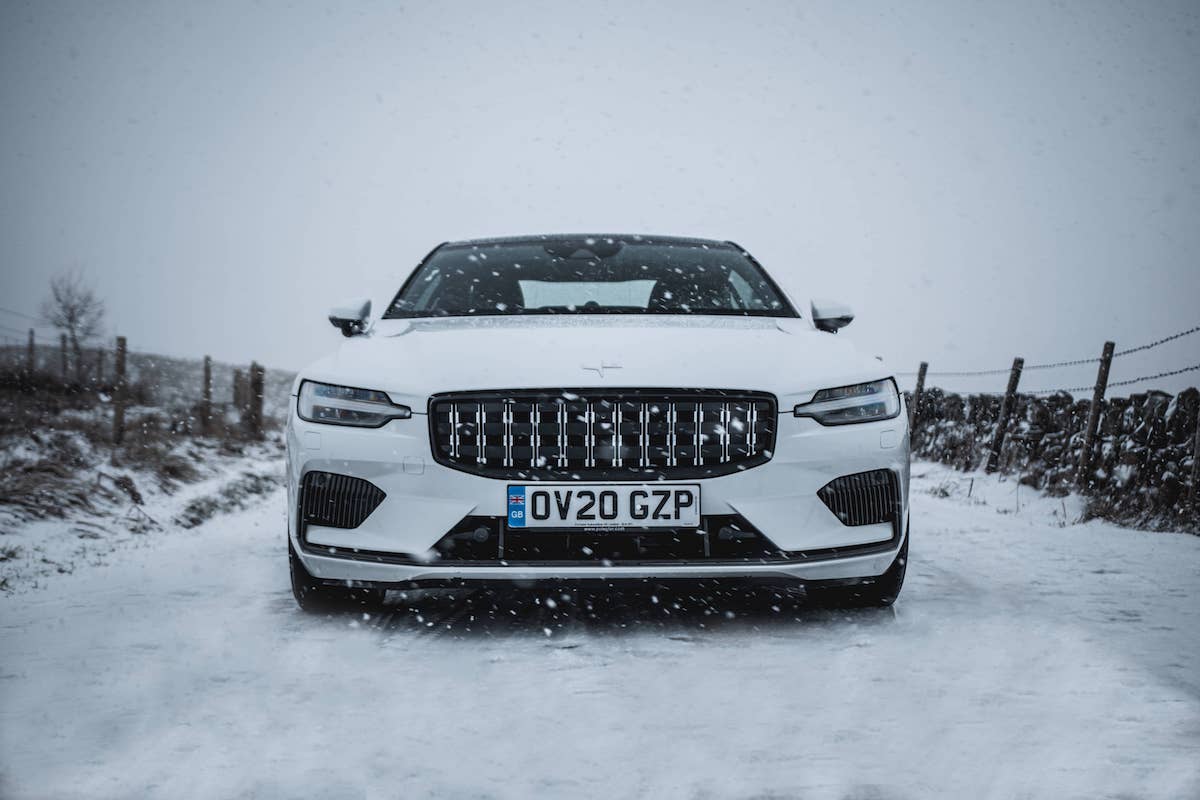 A few days pass, and the Polestar 1 is returned to Polestar UK. I'm hit with a wave of The Big Sad because this captivating machine has forever captured a part of me.

It's an oddball car, that’s for sure, but we've been on an adventure together and we’ve bonded through county-wide drives, snow, ice, and me doing Adult Swearing at its infotainment system. Given the feelings of child-like wonder and amazement that the Polestar 1 evoked in me over a week, it’s a car I will never forget. 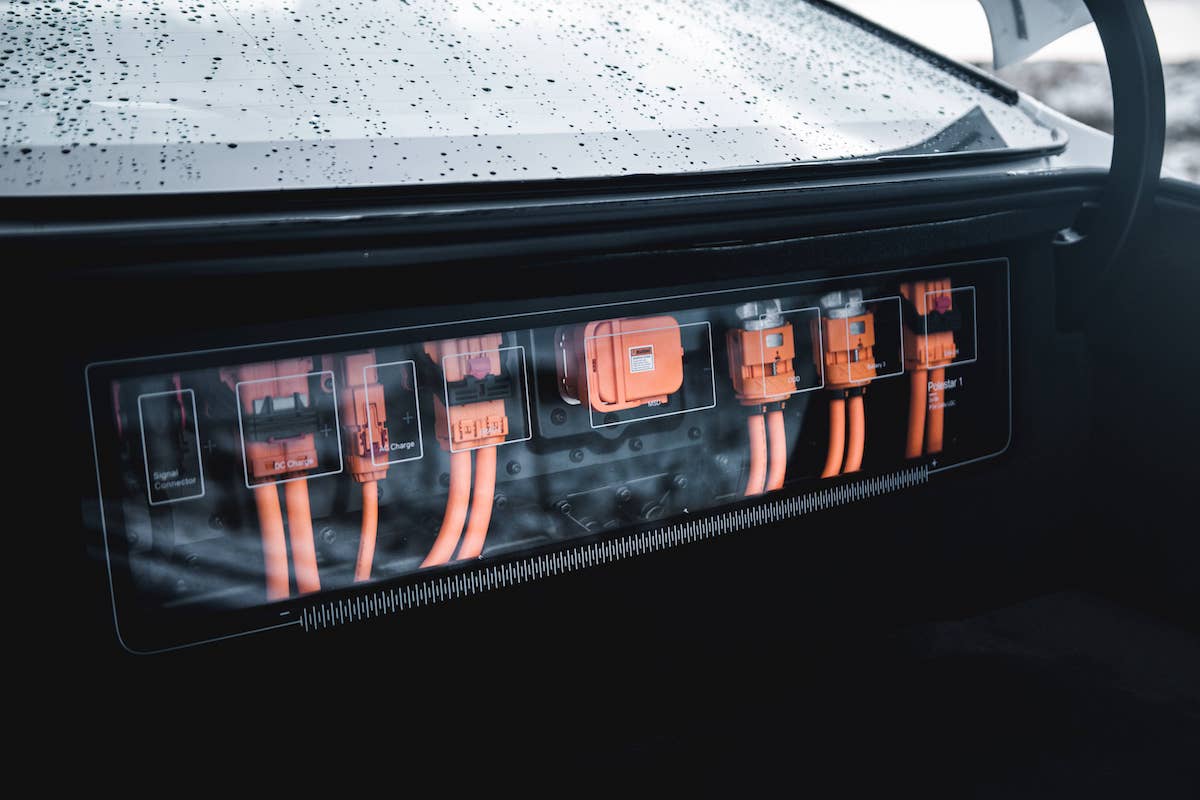 The back wall of the boot features the wiring behind the Polestar 1’s electric propulsion system which provides 78 miles of all-electric range. It’s very orange and it lights up at night and it’s very nerdy and it’s very cool
© Ignition Media/Dyler.com

The Polestar 1 is something that happens when a manufacturer throws everything it has and then some more at creating what it deems to be the perfect car. Polestar founder Thomas Ingenlath and Joakim Rydholm should be applauded for that. 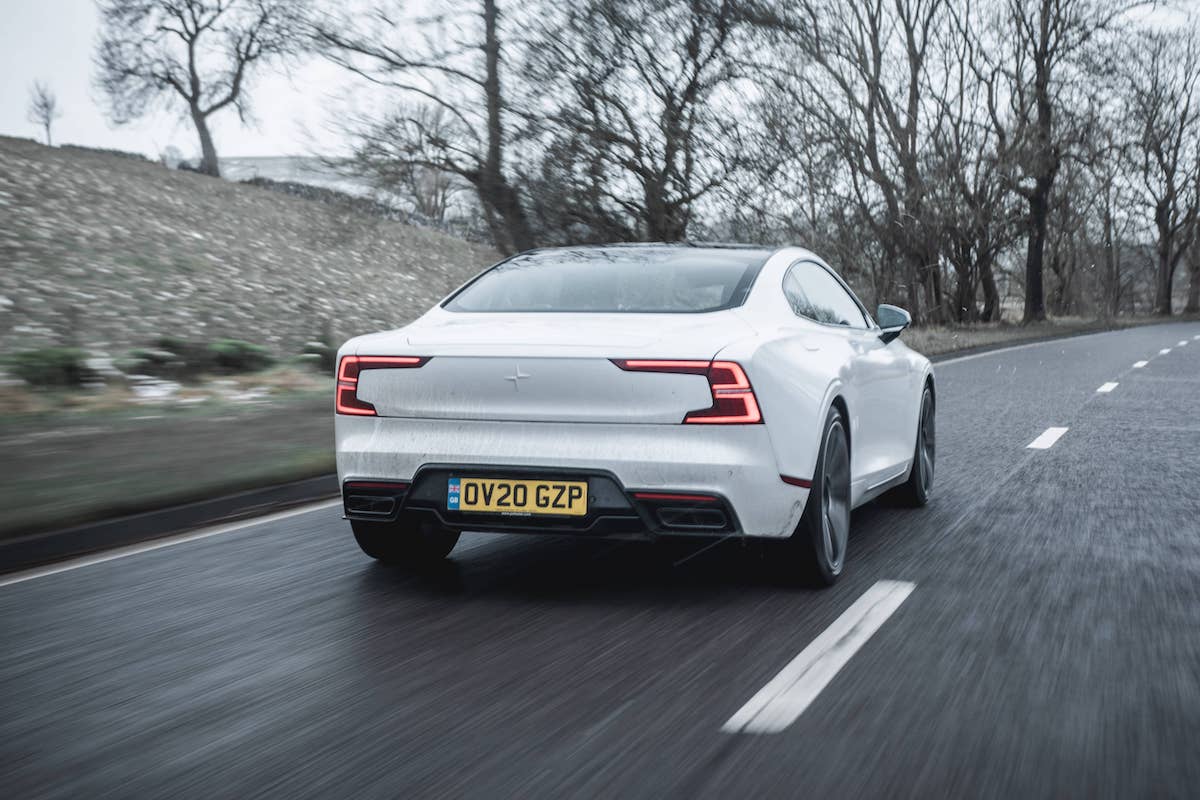 And that’s it! If you would like to buy a Polestar 1, then click these words to browse through the thousands of EVs and PHEVs listed on Dyler.com.

Another thank you goes to Polestar UK for the loan of the Polestar 1 for a week.