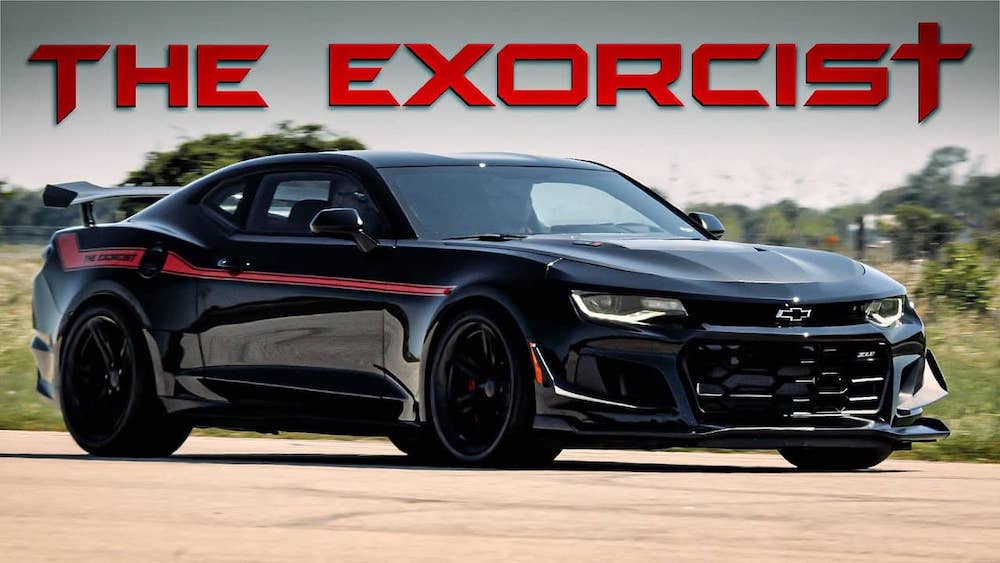 Let’s face it, the world’s in a bad state right now. If we’re not turned into radioactive dust by the time you have read this, then we have the electrification of the automotive industry to look forward to by the end of the 2020s. If, that is, we make it to the end of the decade.

With that in mind, here are some of the best sounding engines on sale today. Turn your volume up! 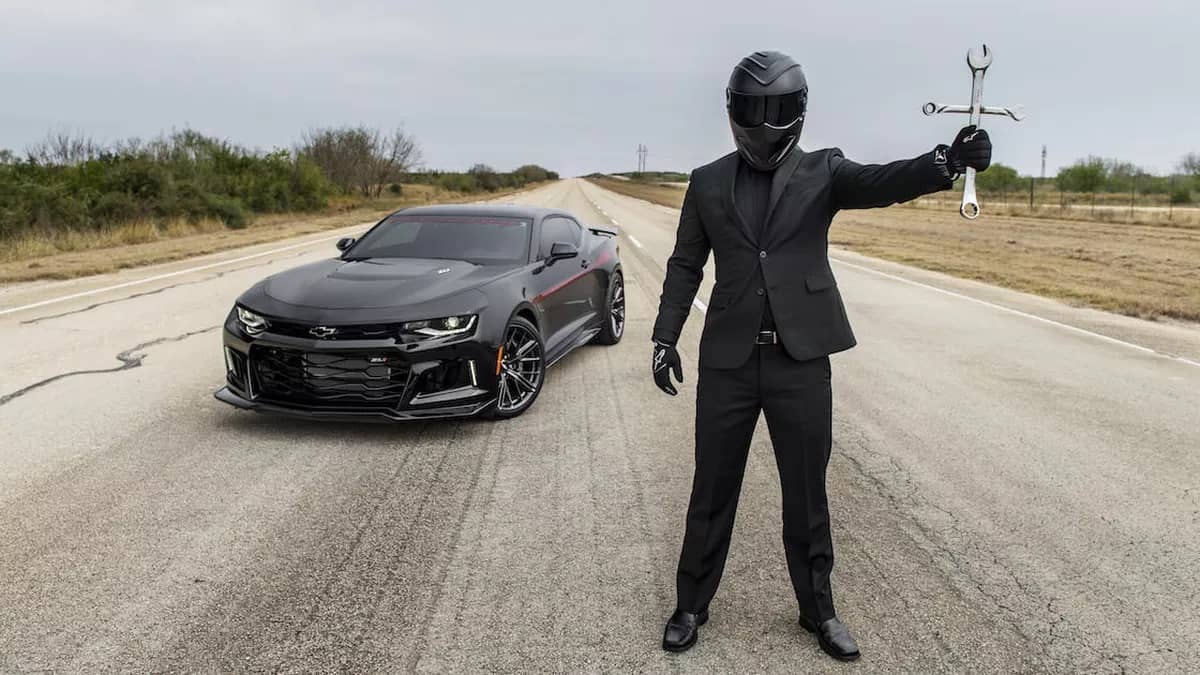 With over 1,000 BHP and a top speed of over 200mph, the Chevrolet Camaro Exorcist is one of the fastest production cars on sale today
© General Motors

As if the “poverty spec” Chevrolet Camaro wasn’t quite powerful enough, American tuners Hennessey created the Exorcist. Aimed to exorcize the equivalent Dodge Demon (more of that later…), Hennessey took an ordinary Camaro and fitted a whole raft of new under-the-hood goodies to its 6.2-litre engine. The upgrades include a high-flow supercharger, an updated intercooler, and updated valve springs. The result is 1,000bhp, 1,310Nm of torque, and a top speed of over 200mph. To put this into perspective, the standard Camaro produces 647bhp and 857Nm worth of torque. To underline its hellishly fast credentials, this massively exclusive muscle car - only 100 are made per-year - also has a black and red paint job with unique Exorcist badging. Oh, yeah - it sounds awesome, too. To listen to it, click here. 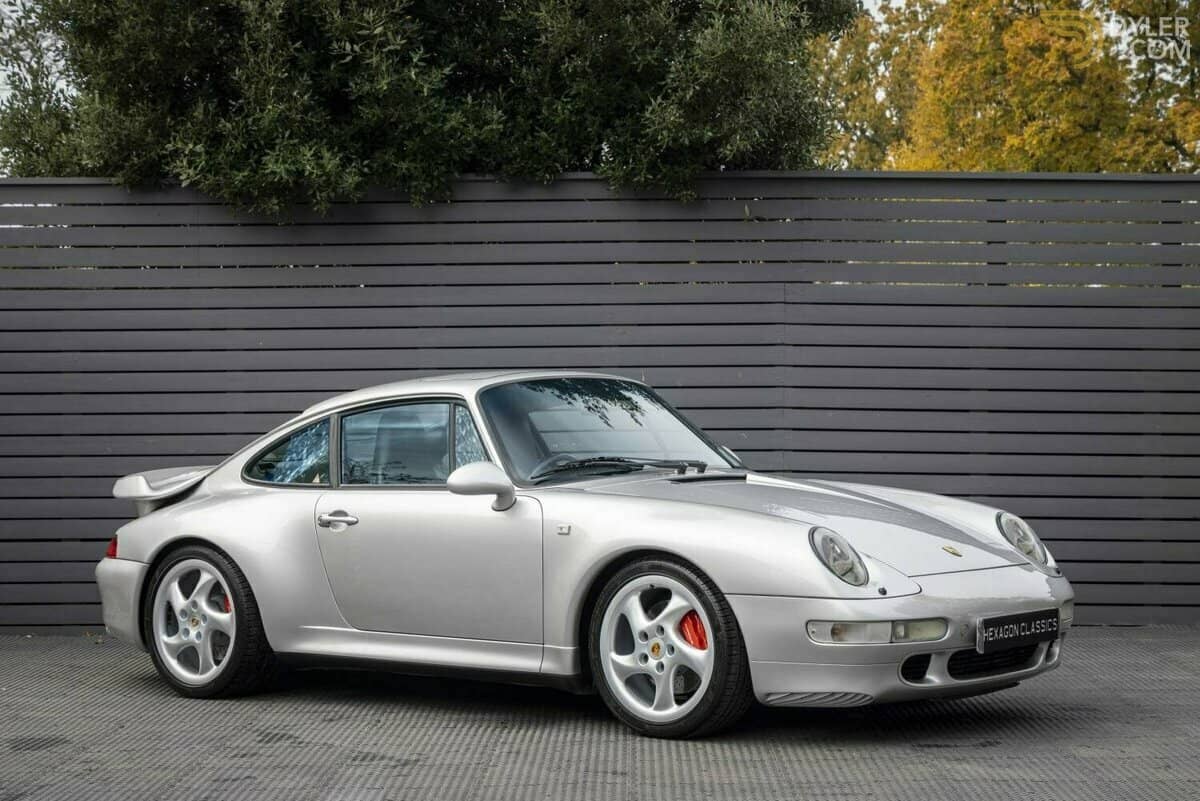 The greatest Porsche 911 of them all?
© Hexagon Classics

The Porsche 911 is one of those cars that’s loved by everyone with even the slightest drop of petrol in their veins. Yet whilst water-cooled cars from the 996 onwards are considered to be more technologically advanced, the older cars - from the original 911 to the 993 - with their air-cooled engines are considered to be the most charismatic of the bunch. The air-cooled units are not only simpler than their later counterparts, they provide a distinctive ‘fluttering’ soundtrack with or without a turbo. To listen to some air-cooled beats from the streets of Zuffenhausen, click here. 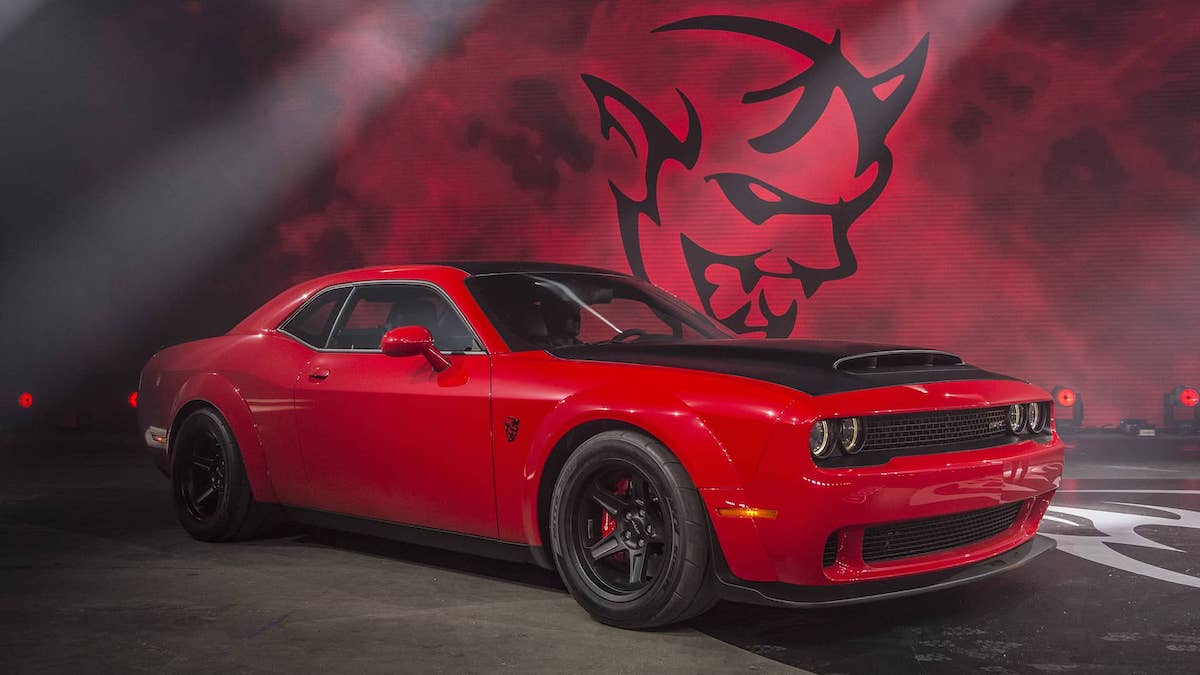 Hellishly loud, the Dodge Demon packs 840bhp and has plenty of devilish logos to boot
© Stellantis

The Demon was the car that sparked the horsepower showdown between Chevrolet and Dodge at the end of the 2010s. Launched in 2017, the Dodge Demon is a supercharged hot-rod for the 21st century. With “only” 840bhp and 770Lb of torque, the Dodge Demon can’t quite match the Chevy Camaro Exorcist we’ve already seen in terms of numbers. It is, however, lighter, which makes the Demon fast. In fact, it’s the world’s fastest car over a quarter mile and will do this distance in 9.65 seconds. Its 6.2-litre HEMI V8 is also the most powerful engine of its kind to be fitted to a production car. It will reach 0-60mph in 2.3 seconds, and 30mph in one second. ONE. SECOND. What’s more, Dodge will also offer you a Demon Crate, a portable box of goodies for your Demon. This will set you back for the princely sum of $1. Amongst other things, the Demon Crate includes a performance powertrain module, narrow, front-runner wheels to use on a drag strip, a performance air filter, and a passenger mirror block-off plate. All of this in the name of definitely not drag racing. The Demon’s soundtrack is as hellish as you would expect with a screeching supercharger note that Beelzebub himself would fear. Get some of that in your ears by clicking here. 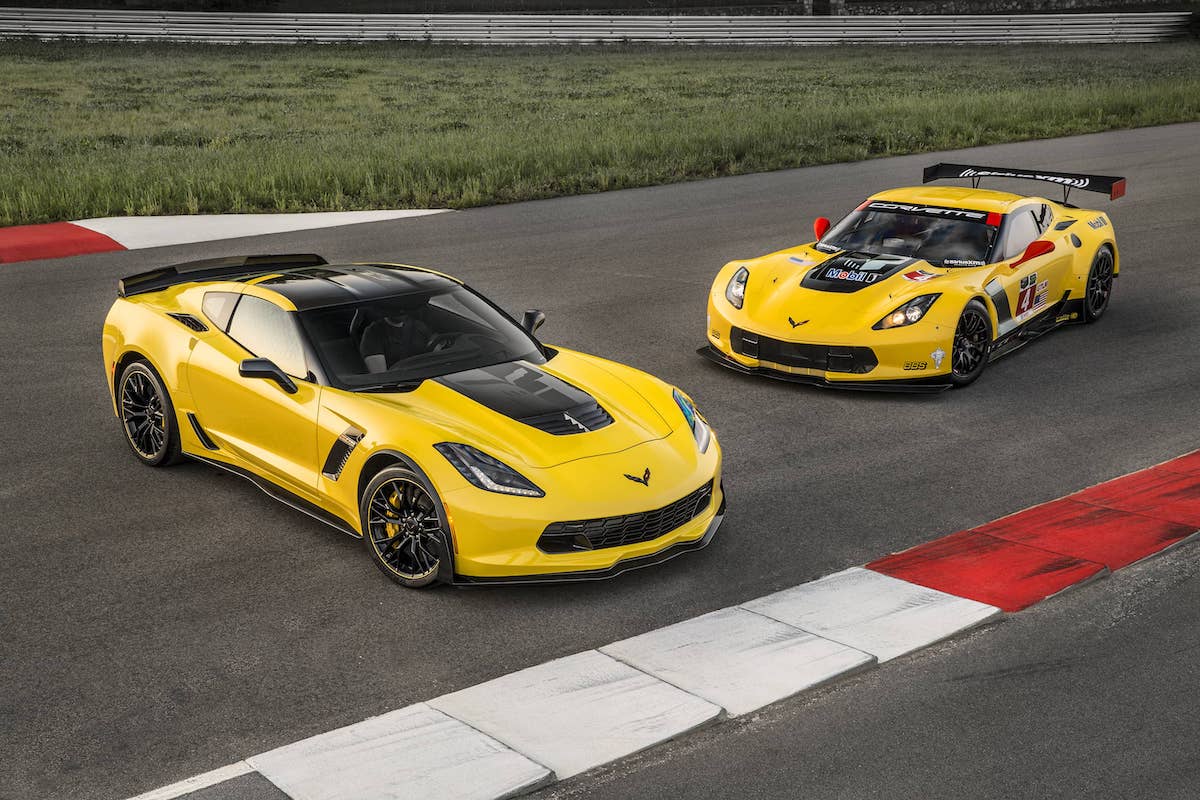 Two of the best sounding cars ever - thanks, Chevrolet
© General Motors

At Dyler, we have a bit of a soft spot for the Chevrolet Corvette. It may be the butt of plenty of unkind “Florida”, “golf club,” and “white New Balance sneakers” but the Corvette - especially the C7 you see here - is a glorious car. Sure, its inside is pretty plasticky and it may not have the pedigree of a Porsche, a Ferrari, or an Aston Martin, but it looks spectacular and its naturally-aspirated crossplane crank, 6.2L V8 provides a engine note that builds into a noise akin to many angry bees stuck in revolving door. With the new Corvette, the C8, Chevrolet has attempted to take the Corvette upmarket. The V8 has been moved from the front to the middle, and Chevrolet also offers a flat-plane crank version of the motor. Without a doubt, the C8 is a far superior car to its predecessor. It has impeccable build quality, handling as good as anything from this side of the pond, and its new design makes it a little less… shouty. The flat-plane crank V8 also adds a big dose of Europeanness to the C8 - the engine note is now more of a high-end scream (think, Ferrari V8) than a street-fighting man rumble. And for that reason, we think the Corvette’s lost that Americanness that made it so desirable in the first place. Get some American heavy metal down you by clicking these three words. 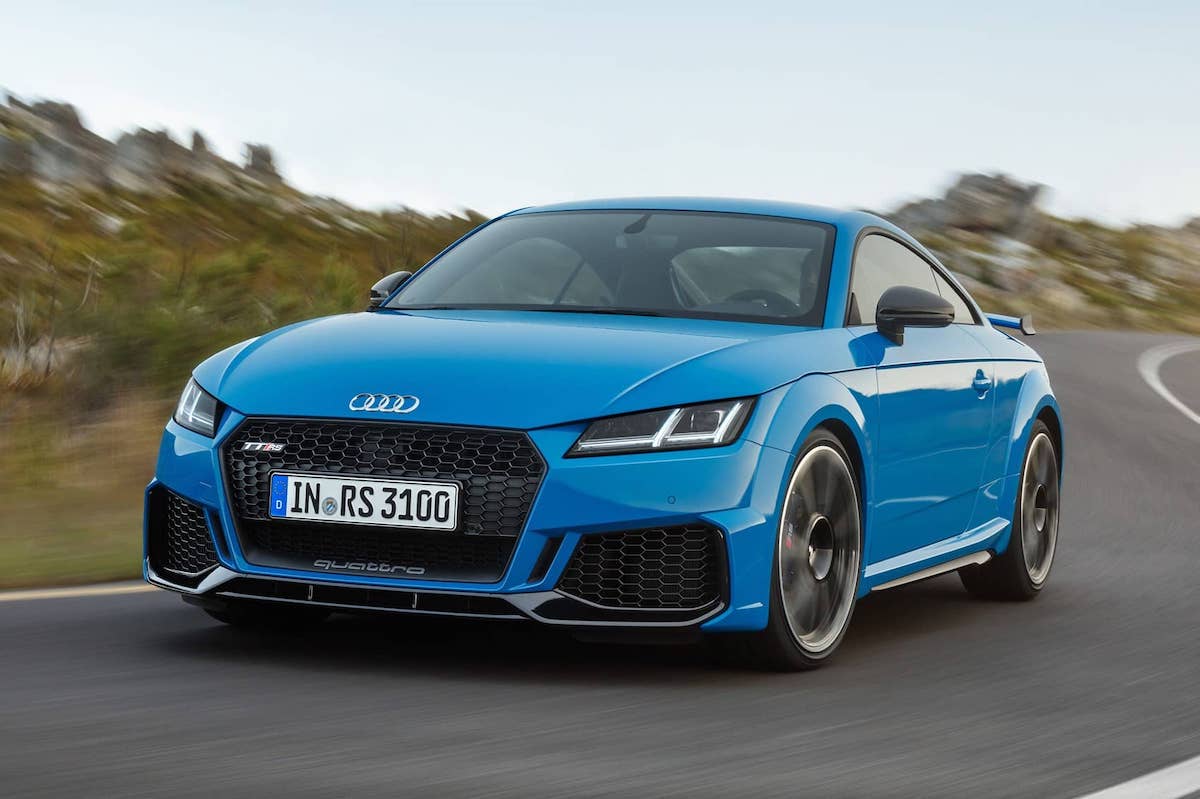 Audi began experimenting with five-cylinder motors back in the 1970s. Despite being an unorthodox cylinder configuration, the five-banger can be mounted transversely which makes it friendlier in terms of space and kinder to a car’s weight distribution. This is one of the reasons why Audi fitted a five-cylinder in 2.1L to its Ur-quattro in the early 1980s. The fact it could be turbocharged easily and reliably is another. Ingolstadt dropped its five-pots for V6s in the mid-1990s after fitting them to the legendary RS2 and first-gen S6. Thankfully, Audi revived the five-cylinder in 2009 with the TT RS and it’s remained part of the family ever since. In 2022, the Audi RS3 and current-gen TT RS are fitted with a 2.5L meaning the originally burbly spirit of Quattro very much lives on. For some German aural oddballity, follow this link. 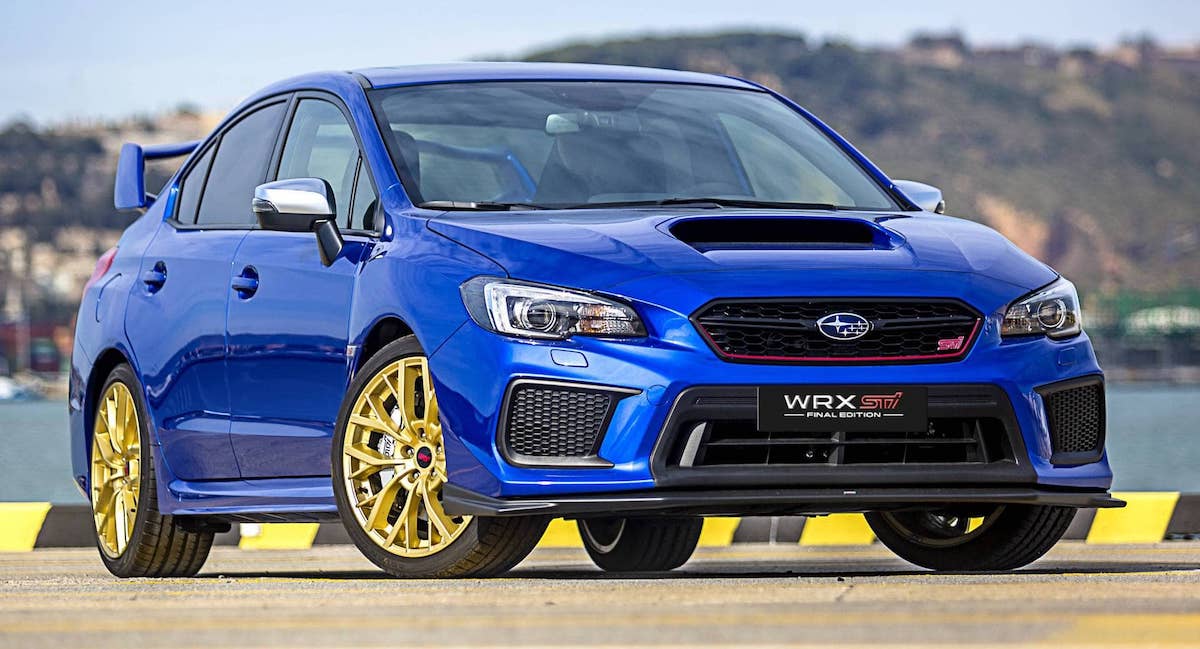 It’s not a great car, but it sure is a fun car
© Subaru

Brrrrr…. Rumble, rumble… brrrrr…. *chirp, chirp* - the legendary Subaru four-cylinder boxer needs no introduction. Whilst Subaru’s seven stars have waned in recent years, there’s no denying that their boxer engines have a cult following in the automotive world. Initially made cool by Colin McRae and the Impreza in the 1990s, the Subaru boxer boasts a rumbling, roarty note which makes even the averagest of drivers feel like a rally driver. In addition to their noise, they’re also extremely hardy - if you maintain them properly! - and are ripe for tuning. The boxer’s unconventional piston configuration also means it can be mounted lower than an in-line motor. This creates a lower centre of gravity, meaning that the majority of Subaru models - turbocharged or not - have great handling. They are, however, thirsty. Extremely thirsty. Nonetheless, they sound awesome and you too can find that for yourself by clicking here.

If you are interested in owning any of these cars, please click here to browse over 26,000 cars listed for sale on Dyler.com!