Earlier this week, those of us at Dyler.com were having a discussion in the (virtual!) office about the link cars have with certain objects and something we all agreed on was the symbiotic relationship between petrolisti and LEGO.

There is no concrete evidence to why this connection is - it’s just is. If we were going to guess the reasons though, we would say that firstly, it’s because a LEGO vehicle was probably one of the first cars most of us ever owned. Secondly, it’s because there’s an engineer / big kid inside all of us who still enjoys building and tinkering around with things.

Amidst the strangeness and uncertainty of the COVID-19 pandemic, we all need something to cheer ourselves up. This, then, is why we’ve compiled this list of our favourite classic and modern classic LEGO Speed Champions cars of 2020 because as we said, LEGO is something that generally makes car lovers happy…

… unless of course you step on an errant brick that’s gone rogue in the carpet. That hurts. A lot. And there will be screaming. 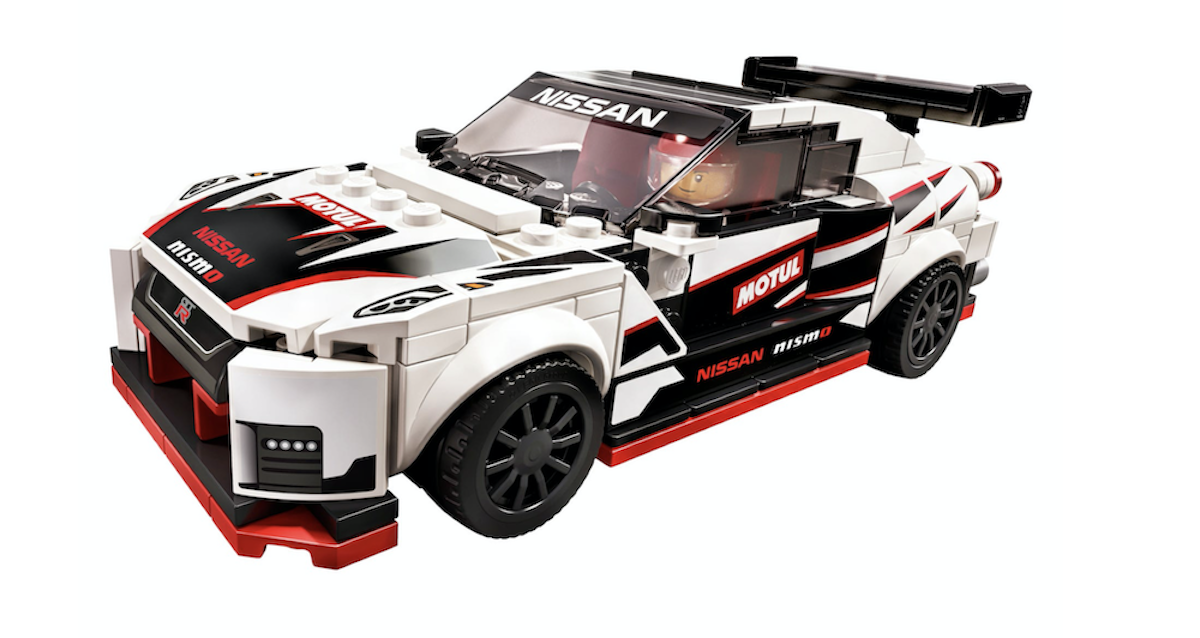 The GT-R Nismo is the first LEGO Speed Champions car to be made with the help of a Japanese manufacturer. Like the real GT-R, the attention to detail put into producing this little brick vehicle is incredible. According to LEGO lead design, Chris Stamp, the tail light formation posed a particularly tricky challenge for its designers. However, his team came through and the end result is astonishing not just for a model of this size, it’s a simply astonishing piece of design. When unveiled at Nissan global headquarters in Yokohama, the LEGO GT-R Nismo also got the stamp of approval from Hiroshi Tamura - Nissan's chief product specialist for the vehicle who is known informally as "Mr. GT-R". He said “working with the Lego Group was like awakening my inner 10-year-old self to rediscover what makes the GT-R so special to me.” As far as we’re concerned, there have never been truer words spoken when talking about LEGO. 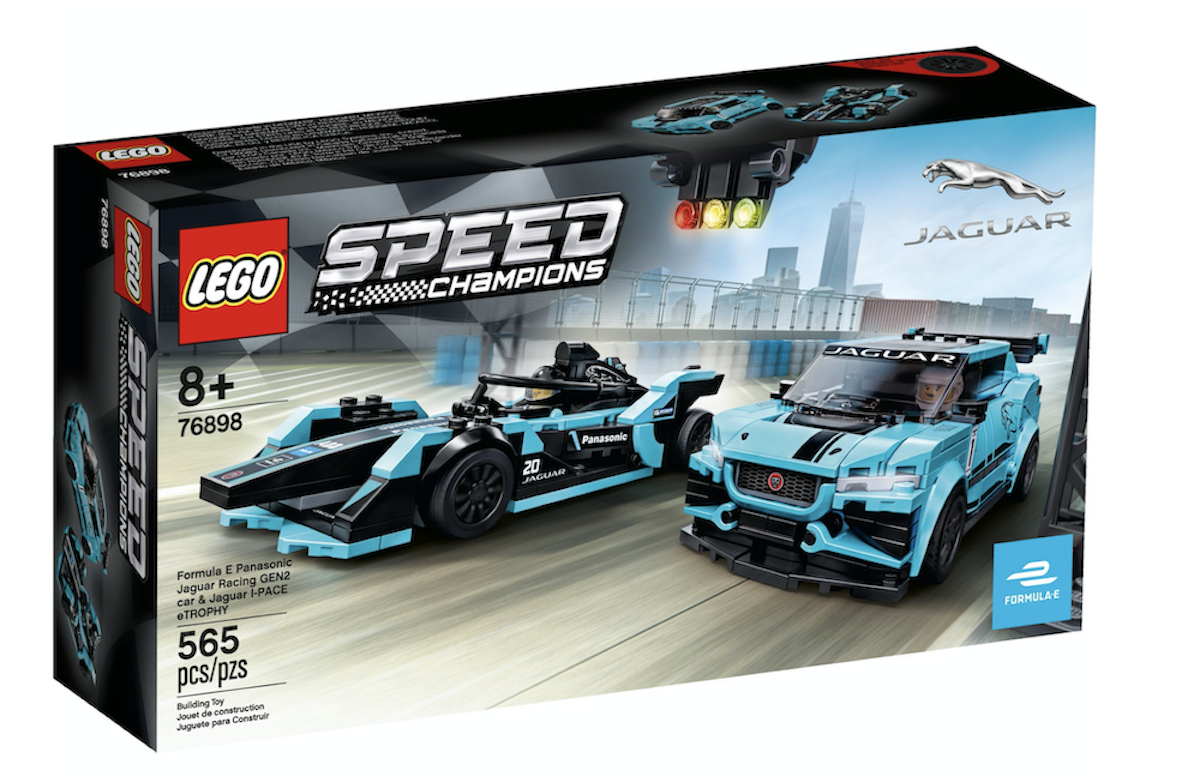 Whilst we specialise in classic and sports cars, we’re big champions of the Electric Vehicles at Dyler.com. The technology used in EVs is mindblowing, they look great, and many of them will achieve classic status in the future - in fact, our partners at Hexagon Classics believe that the BMW i8 is already there! It shouldn’t come as a revelation that we’re fans of Formula E and its support series, the Jaguar I-PACE e-Trophy. This twin kit features the Panasonic Jaguar Racing GEN2 Formula E car driven by New Zealand’s Mitch Evans and Britain’s James Calado, as well as the Jaguar I-PACE SUV which competes in the Formula E support races. Since it started in 2014, Formula E has become arguably the most competitive form of motorsport on the planet as a result of its close wheel-to-wheel on tracks which run through city centres - no surprises then that it has already thrown up a number of classic races in its relatively short lifespan. In 2019, the Jaguar I-PACE was named the World Car of The Year. Could this electric Jaguar pairing be the LEGO Speed Champions kit best suited to the “future classic” tag? 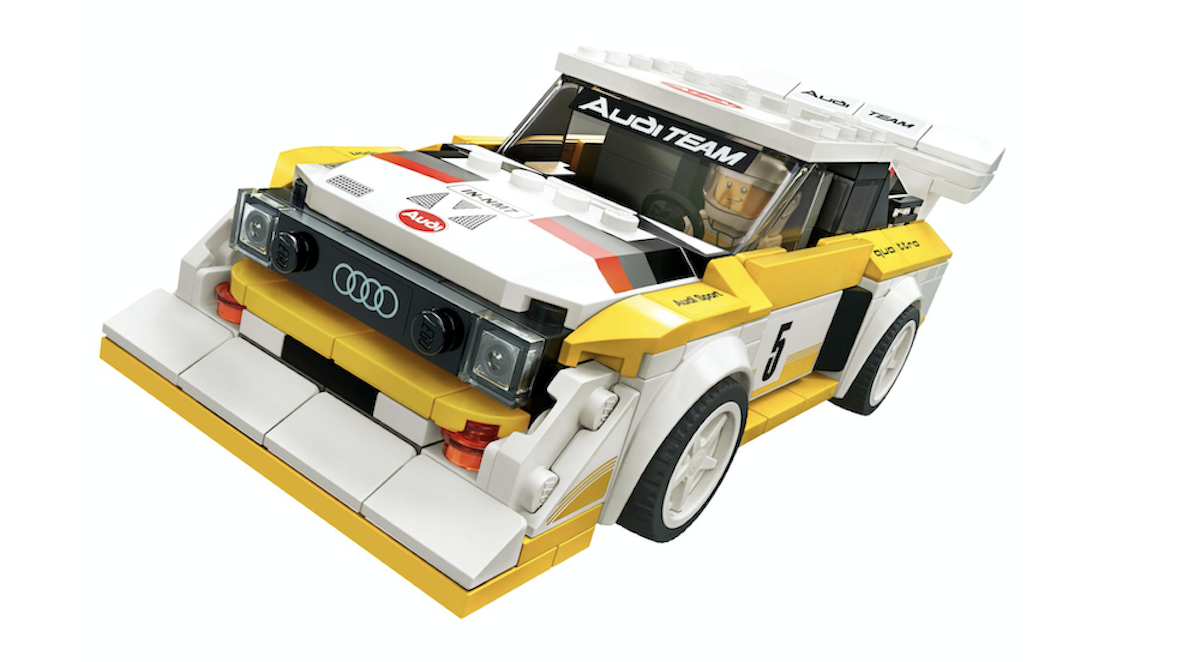 We won’t lie, this Audi is the favourite of our new LEGO Speed Champions kits. It evokes many, many fizzy feelings in us and as the author of this piece who is an unashamed Audi fanboy, it reminds me why I love Audi as a car manufacturer and the World Rally Championship as a sport. The LEGO model is the 1985 Group B Audi Sport Quattro S1 - a beast of a car that produced over 500bhp from its 2.1Litre inline-5 engine and would accelerate to 100 kilometres per hour in just 3.1 seconds. To add to its iconic status, the car was driven by a line of legendary WRC drivers including Hannu Mikkola, Michèle Mouton, and Walter Röhrl during the 1980s. It would also be a lie to say that we’re not thrilled with the miniature driver that comes with this kit… Anyway, the Audi Sport Quattro S1 is the first rally car that Lego has made for its Speed Champions range and we’d love to see more similar vehicles added to the line-up in the future… you know, cars like the Audi S1 EKS RX World Rallycross Supercar or Colin McRae’s blue and gold Subaru Impreza. Are you listening, Lego? 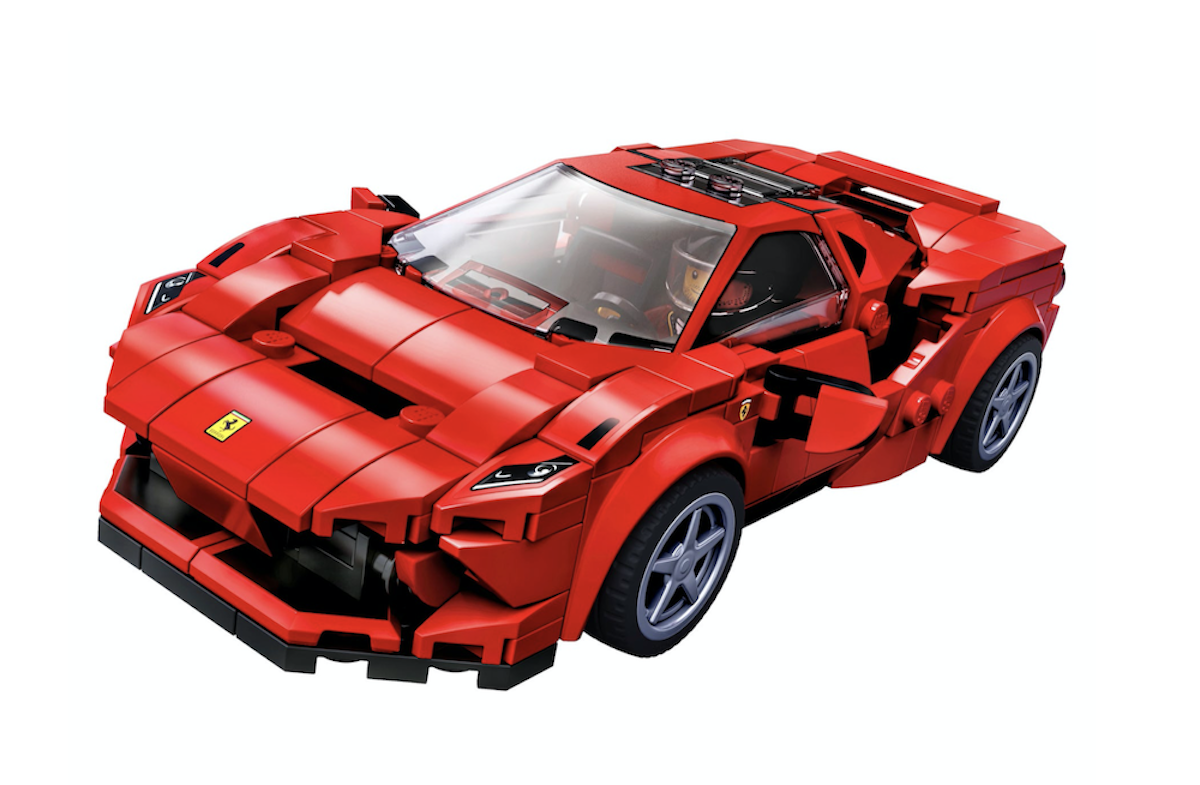 Ferrari have always played a part in the LEGO Speed Champions series and in previous years, the legendary Ferrari F40, the Ferrari SF16-H Formula 1 car driven by Sebastian Vettel, and the Le Mans winning Ferrari 458 Italia GT2 have all been part of the line-up. The latest LEGO Ferrari to join the Speed Champions range is the F8 Tributo and like every LEGO Ferrari that has come before it, it comes in Maranello’s traditional Rosso Corsa red and looks great. Just like the road-going Ferrari F8 Tributo, we’re particularly fond of how this car looks with the top off and if you pair it with the GT-R Nismo we mentioned earlier on, you could very well host your own LEGO lockdown supercar shoot-out in the comfort of your own home… 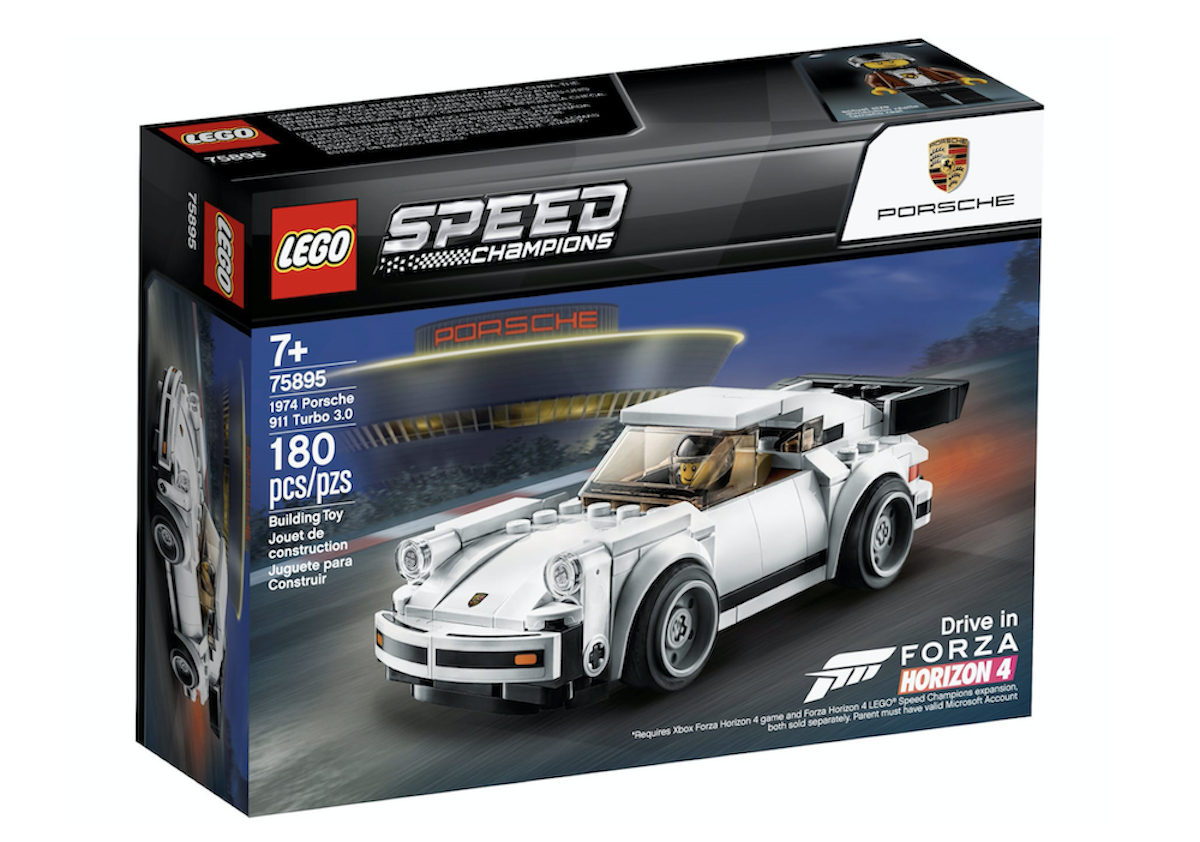 Over the years there have been some great LEGO Speed Champions Porsche models: there has been a twin set of 911s new and old, the FIA World Championship winning 919 Hybrid, and the 918 Spyder hypercar. Out of all of them, we like this Porsche 911 ‘whaletail’ the most - it might not look as striking as some of the other Speed Champions cars, but LEGO have got its proportions absolutely right. For LEGO Loving xBox Players, this 911 - along with other LEGO Speed Champions cars including the McLaren Senna - is also available as a LEGO Speed Champions add-on for Forza Horizon. LEGO and video games? We can’t think of many other better ways than this to ride out the COVID19 storm. If you can, let us know! 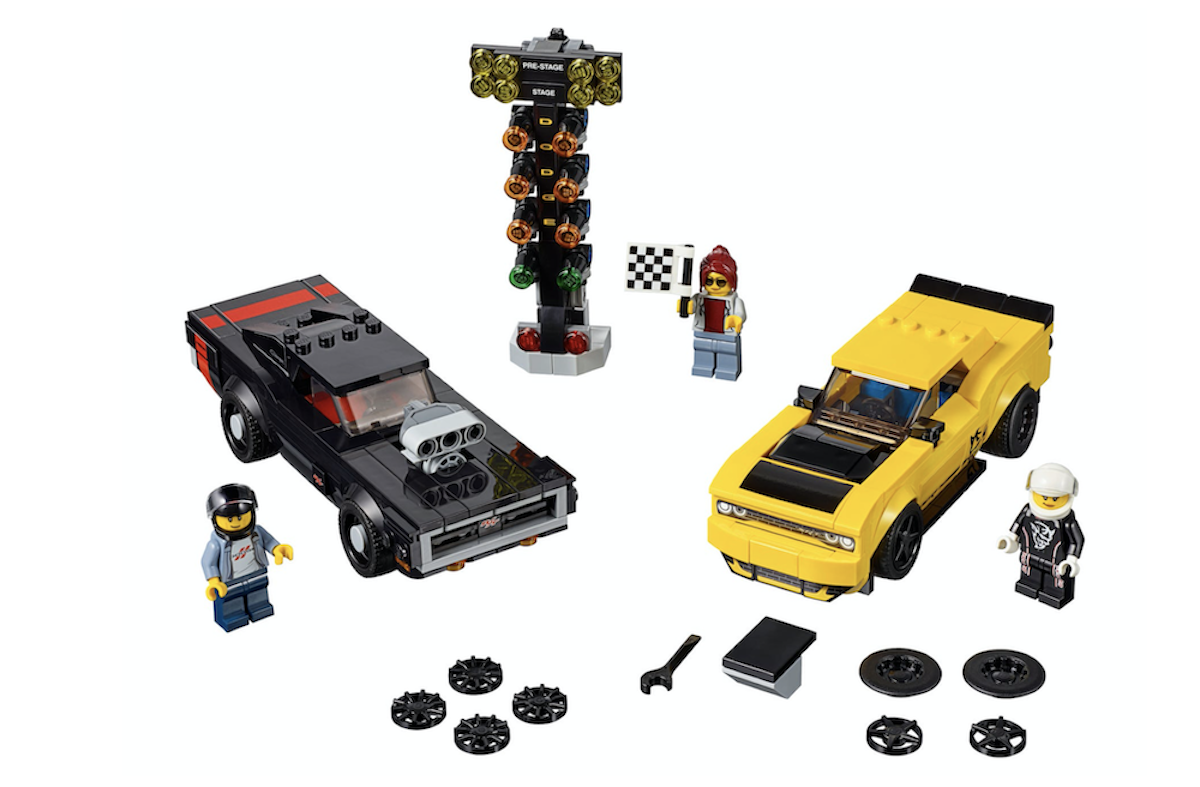 American Muscle Cars are great. They’re big, shouty, heavy and for that, we love them. Given that the “smallest” engine in the first Dodge Charger was a 5.2L V8 (that’s the black one on the left) and they downsized to the entirely sensible 3.7L V8 motor for the second generation, these are not cheap cars to run. At a time when most companies are downsizing, Dodge - along with Ford and Chevrolet - are still putting thumping great V8s under the hood of their modern day iterations of Muscle Car Classics such as the Dodge Challenger (that’s the yellow one on the right). We salute LEGO for keeping the big dumb fun alive, albeit in miniature form!

Are you a Lego classic car enthusiast? Send us your Speed Champions models or own creations via email or Facebook - we’re very much looking forward to seeing your builds!