Without Doubt, The 2022 Ford Puma WRC Boasts One Of The Best Race Car Liveries We’ve Seen in Years! 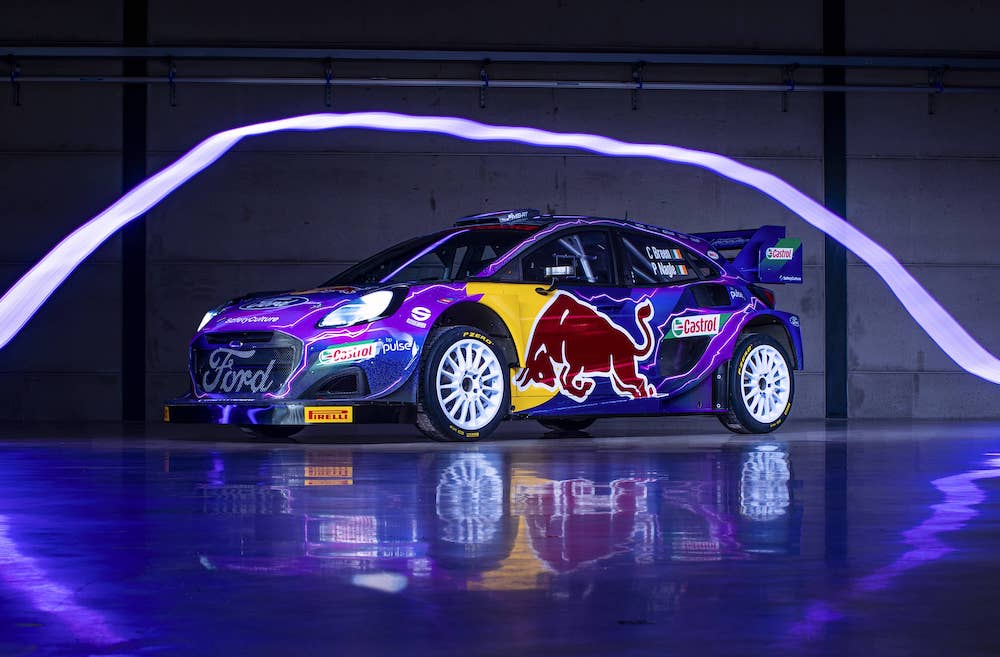 We’re big fans of rallying at Dyler, so we’re more than excited that the 2022 WRC season kicked off yesterday with the Rally Monte Carlo.

What’s more, WRC 2022 is set to be one of the most exciting seasons ever thanks to a set of new rule changes. The biggest alteration to proceedings is the introduction of the new Rally1 regulation, which means that the sport’s top-flight cars are now fitted with a mandatory 100kW hybrid system, which is mated to their 1.6-litre turbocharged engines.

The overall result is 500bhp and cars that look properly spectacular. What’s more, Ford has already won the prize for the best looking car with its Puma Rally1 WRC - the car you see here.

Granted, a Red Bull logo makes everything look better, but factor in the Puma’s and blue paint scheme with the electricity bolts flowing (sorry…) across the car to amplify (sorry again…) its hybrid credentials, we’d go as far as to say that it’s an absolute future classic of a livery. 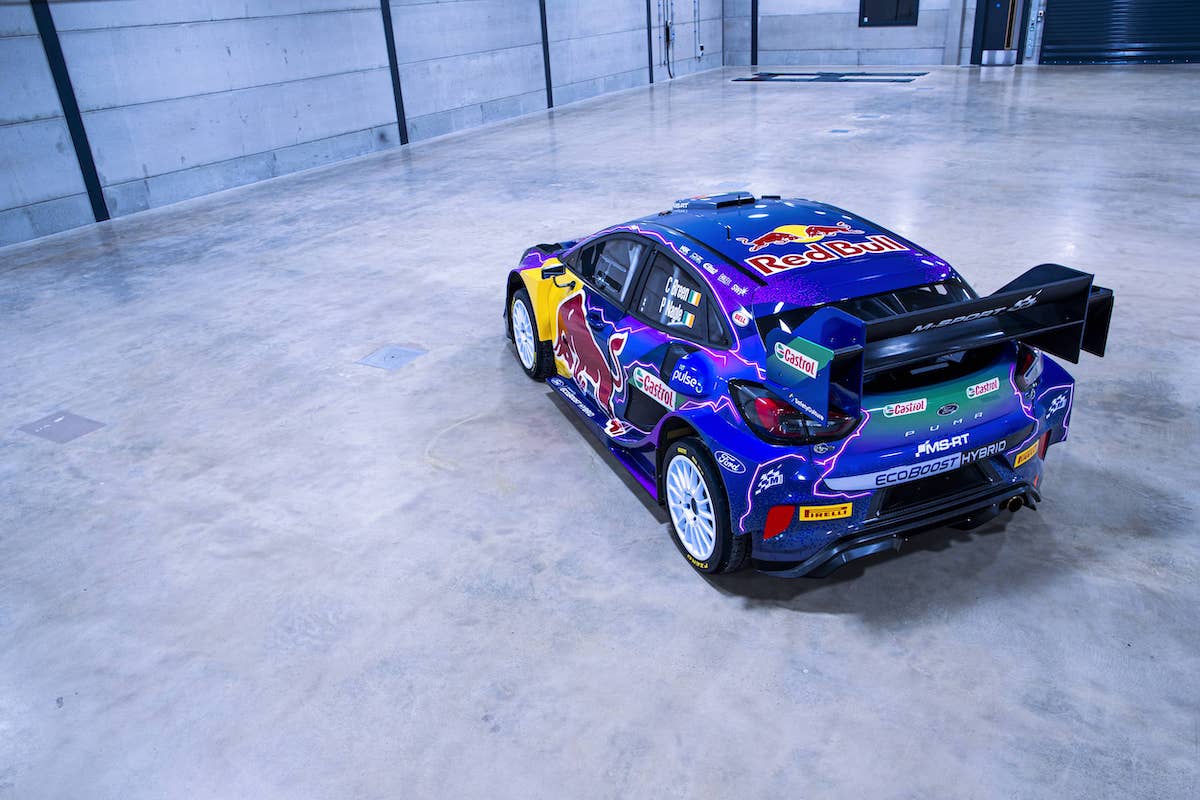 Has there been such an eye-catching WRC livery in recent years?
© Drew Gibson

With that in mind, we’ve put together a list of some of the awesomest liveries in motorsport over the decades factoring in everything from rallying, Formula 1, and GTs, to DTM, NASCAR, and sports cars.

Which one of the racing liveries below is your favourite?

If you grew up playing Sega Rally, then you’ll know what we mean…
© Reddit

The 1990s were a golden era for the WRC. Titans of the sport such as Colin McRae, Tommi Mäkinen, Carlos Sainz, and Richard Burns battled it out for honours in turbocharged monsters including the Toyota Celica GT-Four, Mitsubishi Lancer Evo, the Ford Escort RS Cosworth, and of course, the Subaru Impreza. We can’t choose our favourite livery out of all of them because that would be like having to choose your favourite child. But we have to say, there is something about a Toyota Celica GT-Four ST205 in the red and green Castrol livery that we like a lot. 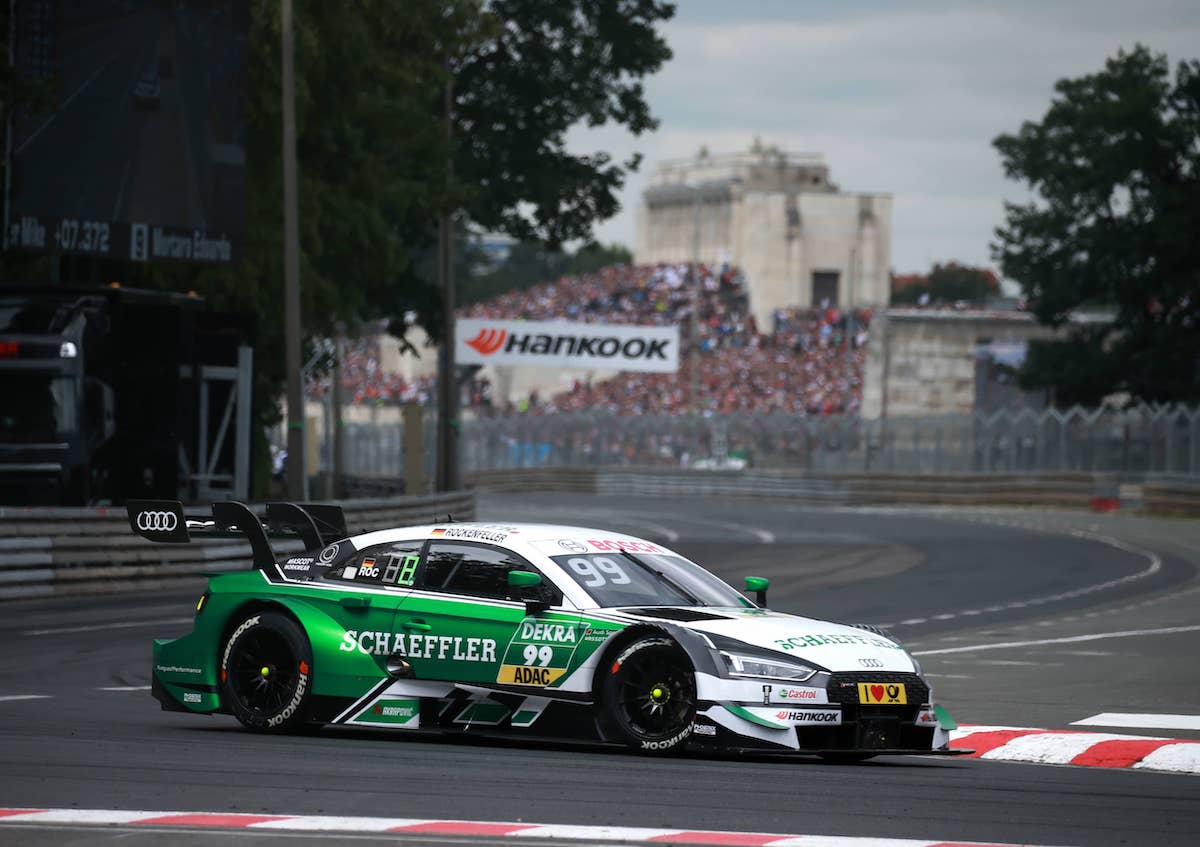 Is the Audi RS 5 DTM the best looking touring car ever?
© Audi Sport

Until 2021, the DTM was the best touring car racing series on earth. The cars were insanely quick machines with over 600bhp, and their hugely complex aerodynamics made Apollo 11 look like it had been put together by a bunch of bumpkins. In our minds, Audi always made the best looking DTM cars and the RS 5 DTM with the green, grey, and white Schaeffler livery driven by 2013 DTM champion and two-time Le Mans winner, Mike Rockenfeller, was our favourite. The colour scheme gave the low-slung, wide-hipped Audi an understated aggressive appearance without being full on shouty like some of the other cars on the grid. Like the actual roadgoing Audi A5, the Schaeffler livery manages to be both classy and classic. 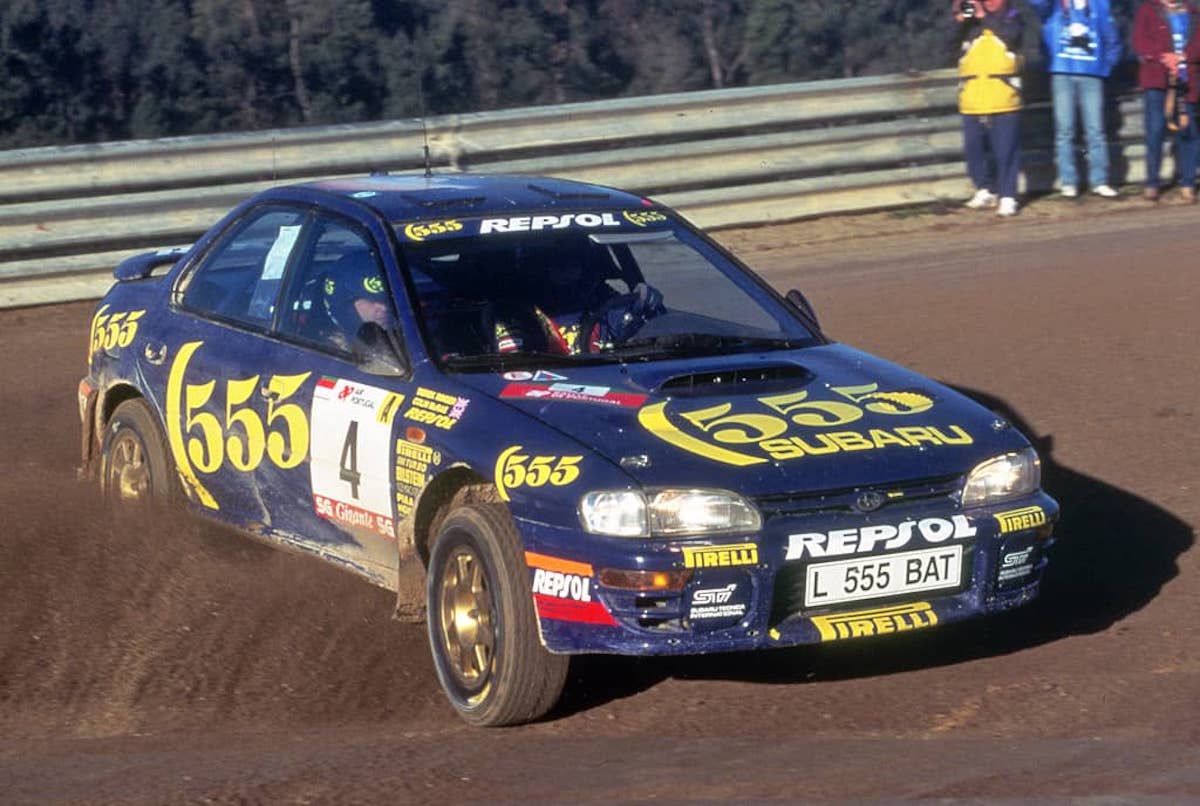 When you say the words “Subaru Impreza” the iconic blue and gold 555 livery is the first thing that comes to mind
© Supercars.net

If you’re as old as some of us, this was your gateway car into motorsport. After all, can anyone - irrespective of age - forget watching Colin McRae dance a physics-defying dance across the stages of the WRC behind the wheel of the blue and yellow 555 liveried Subaru Impreza? Everything about the McRae/Subaru combo was perfect, which is why the Scotsman, his heroics, and this very livery turned Subaru from a Farmers Only brand into something every petrolhead should aspire to own at least once in their life. 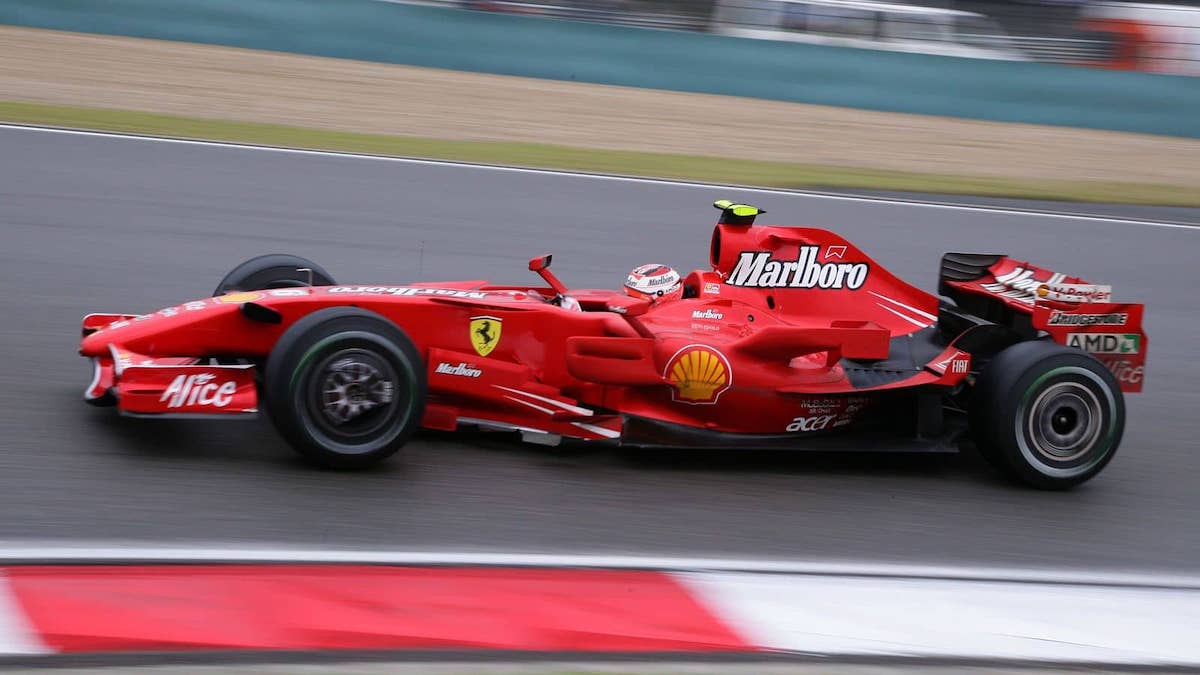 Yes, yes. We know smoking is terrible for you, which is why Marlboro until as recently as 2021 rebranded itself as ‘Mission Winnow’ to retain its involvement in Formula 1 and MotoGP. Credit where it’s due though - whatever form of racing team one of the world’s largest cigarette brands has involved itself with, there’s no denying that it’s thrown up some of the most memorable racing liveries ever; the most famous of which is probably the Ferrari/Marlboro tie-up. Or the Marlboro/Mitsubishi tie-up. Or the Marlboro/BMW tie-up…

Red Bull and Everything 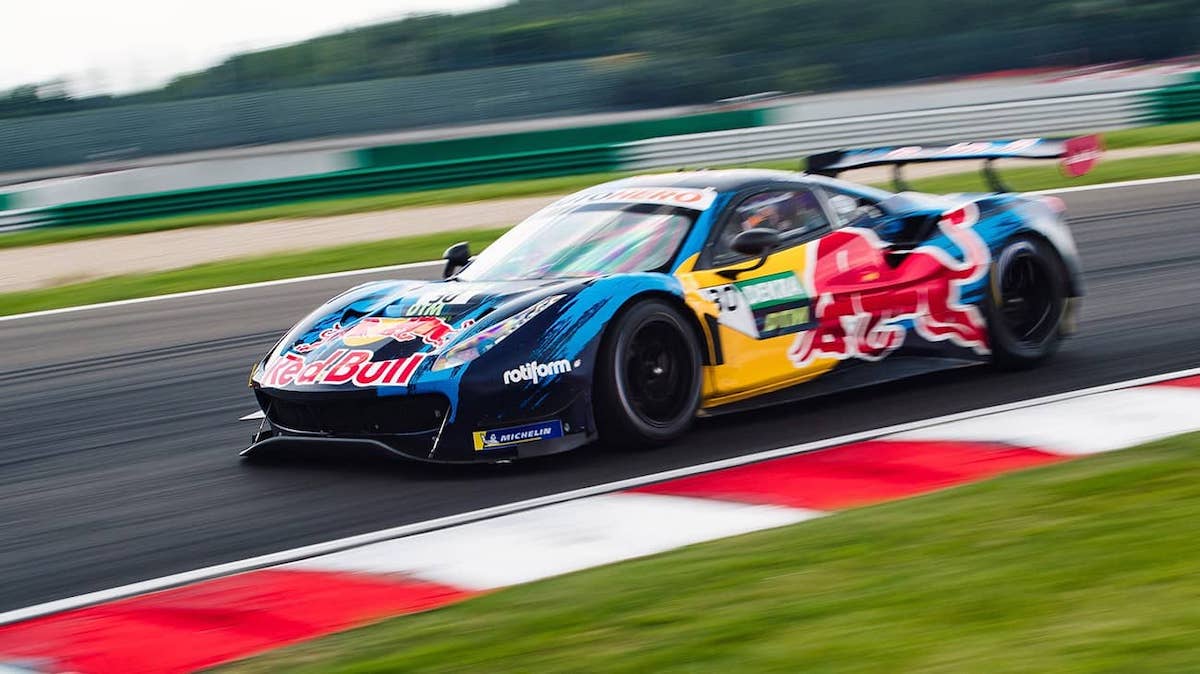 The DTM may not be what it once was, but the cars still look awesome… especially when decked out in a Red Bull livery like Liam Lawson’s Ferrari 488 GT3
© Ferrari.com

Like Marlboro, it’s almost impossible for Red Bull to create a duff livery. Whether it’s applying their colours to something as humdrum as a Citroën C4 (albeit Sébastien Loeb’s WRC version) or a KAMAZ truck for the Dakar, a racing car with a Red Bull livery will look awesome. Whilst we’re not fans of the new DTM with its GT car format, we can’t deny that the Ferrari 488 GT3 driven by New Zealand’s Liam Lawson is properly cool in its Red Bull livery… even if the series is a shadow of its former self. 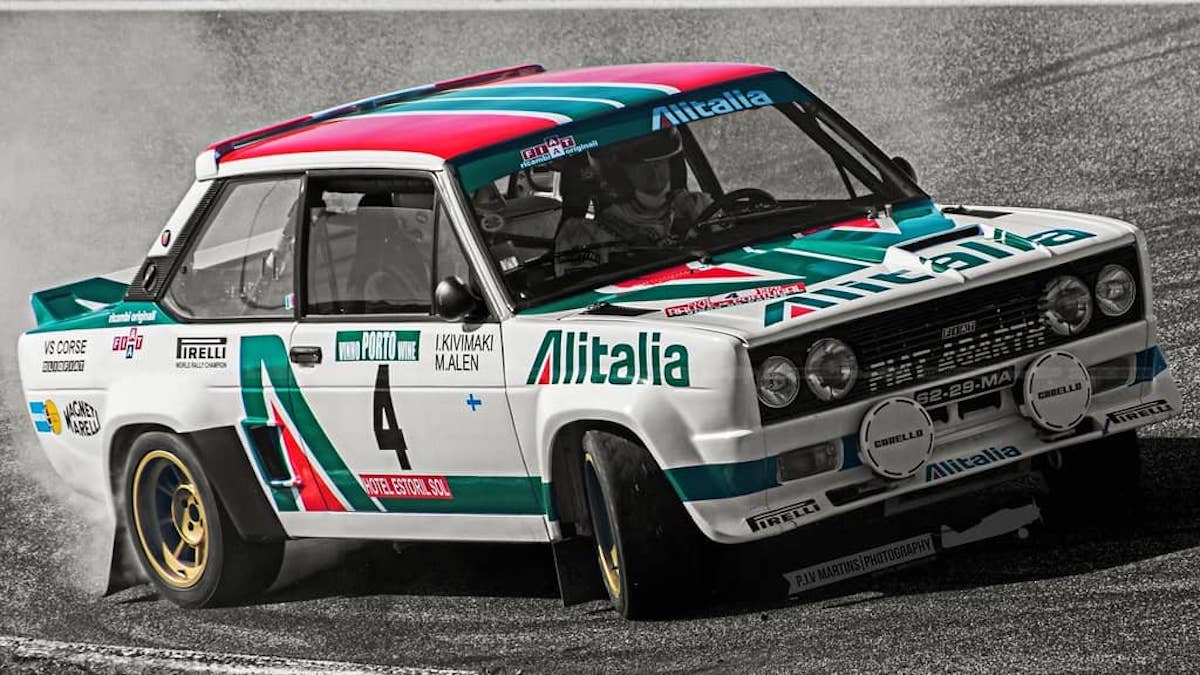 It’s pretty much a fact that Car People and Italy are interlinked. After all, how can anyone with even the tiniest drop of petrol in their blood resist the allure of the country that gave us Ferrari, Maserati, Lancia, and Alfa Romeo? “Nobody” - that’s the answer, and it’s partly why we love the Alitalia livery on any racing car. The now-defunct Italian national airline sponsored only Italian manufacturers in everything from rallying to sports car racing. Alitalia liveries are a rollocking chorus of “Fratelli d’Italia” celebrating the great and the good about Italy. Salute! 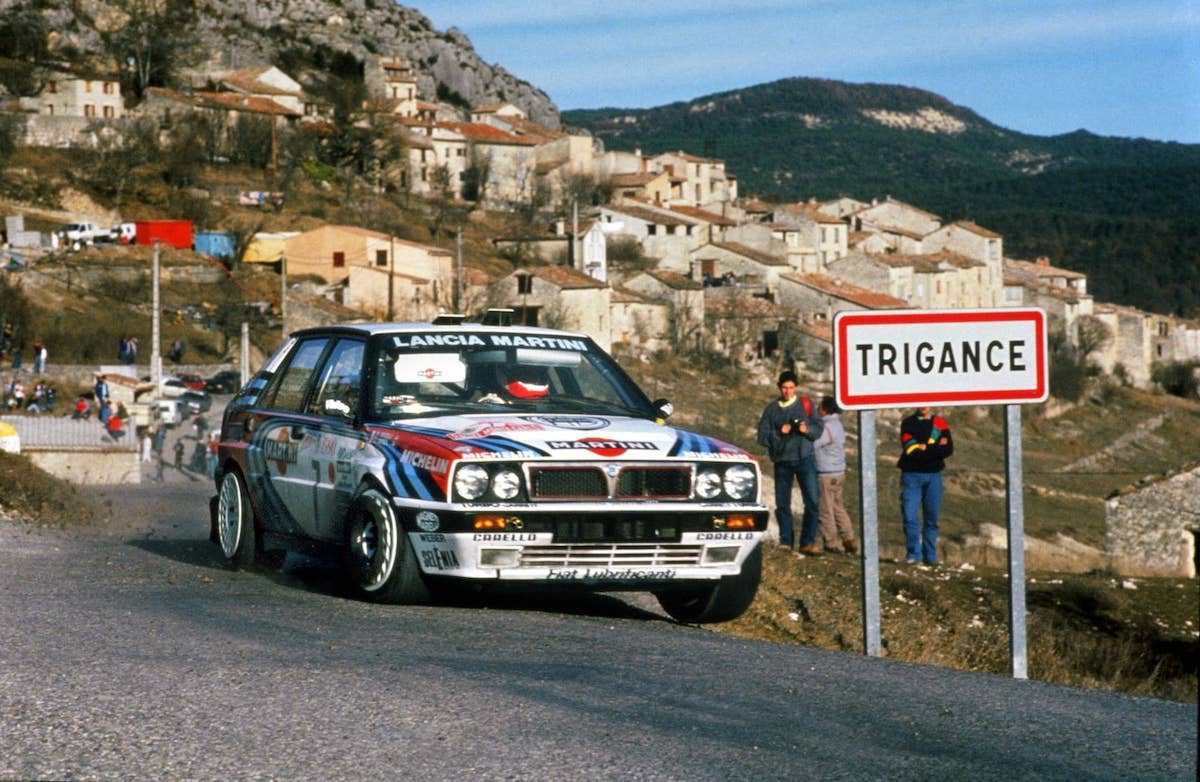 Whilst Martini definitely doesn’t rank as a top-tier drink, their racing car liveries are very much Grade A. Whether it’s on a Lancia Delta rally car, or a latter-day Williams F1 machine, there’s no denying that the classic red, white, and two shades of blue livery will tug at the heart of any motorsport lover. 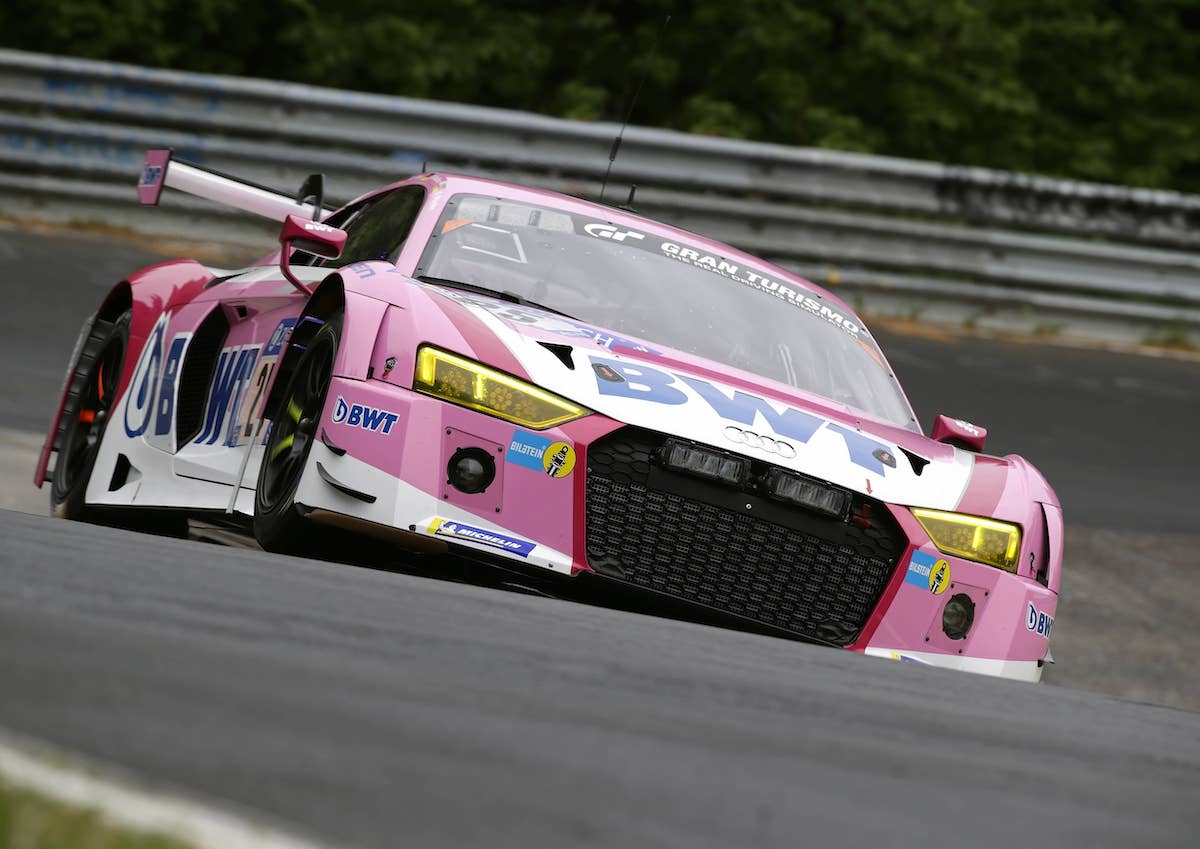 The striking pink and white BWT paint job rose to prominence when it was adopted by Force India-turned-Racing Point in Formula 1. However, it was Audi who originally made it cool back in 2018 when Mücke Motorsport first applied it to the thunderous, V10-powered R8 GT3 LMS competitor it used to tackle the Nürburgring 24 Hours. That’s the Nordschleife too, if you were wondering… 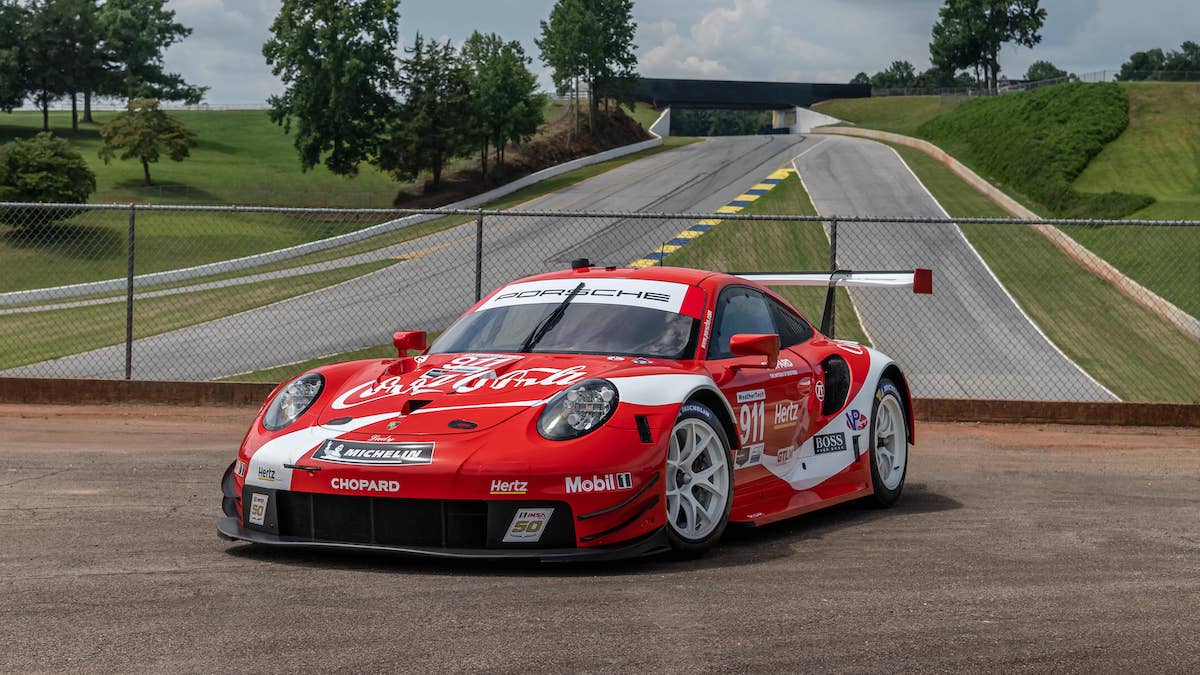 Thousands of years ago since Porsche first got into the business of motorsport, it has always made cool racing cars. The 911 is also one of our favourite cars to have come out of Zuffenhausen. Not only does it look like a very pissed off salamander with wheels - look at it front on! - it was also devastatingly effective on track, winning Le Mans in 2018 and the 2018-2019 FIA World Endurance Championship. The RSR’s final livery before it bowed out of the IMSA championship at the end of the 2019 season was the retro Coca Cola livery you see above, and it comes with a pretty special backstory… 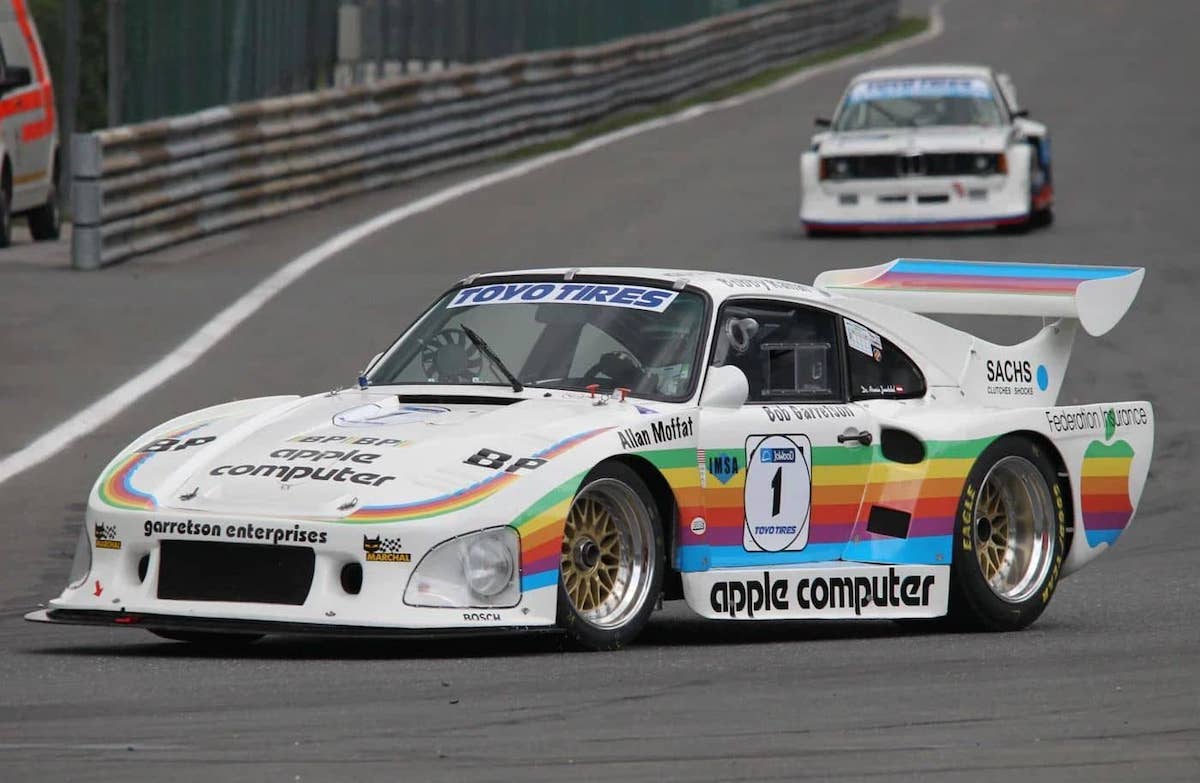 Apple and Porsche. Can you get much cooler? No. Apparently, Steve Jobs was obsessed with the Apple-liveried 935 you see here. It’s not difficult to see why, is it? 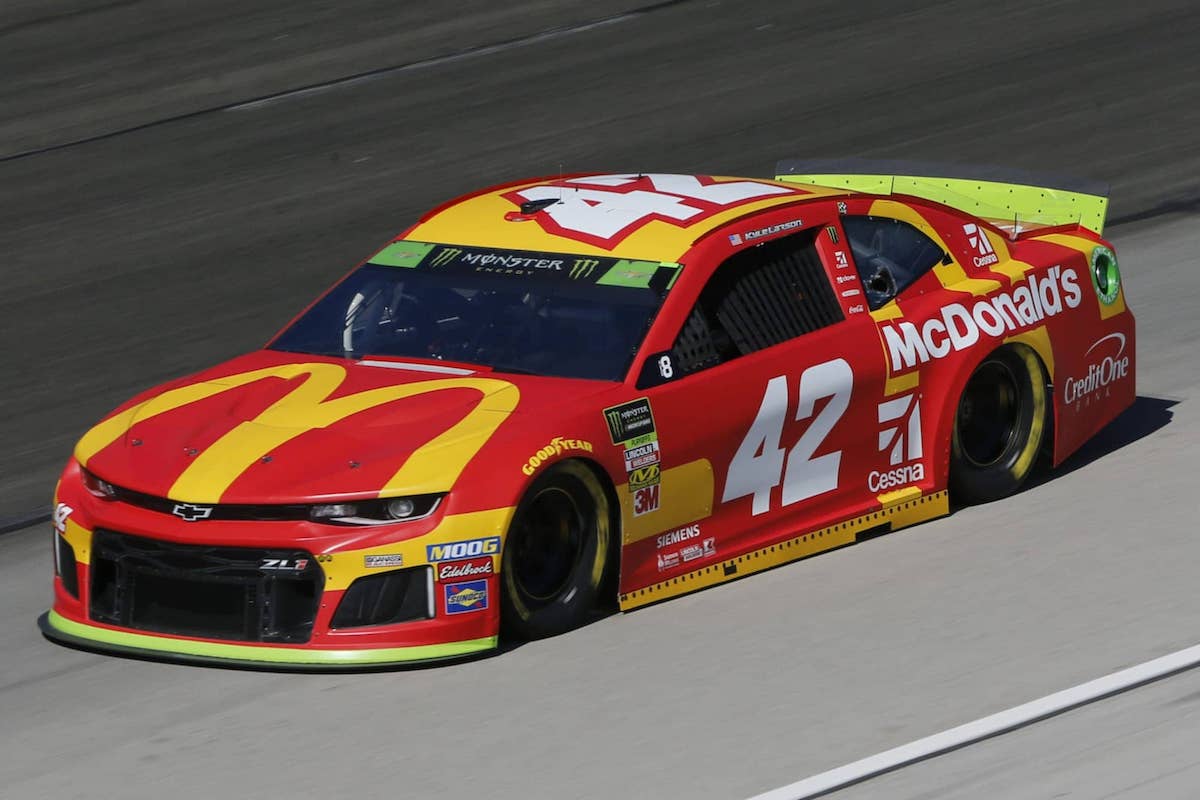 We love NASCAR, pretty much because it’s a no f*cks given antidote to the sterile world of Formula 1. What says “no f*cks given” more than a naturally-aspirated, 750bhp Chevrolet Camaro ZL-1 NASCAR wearing a NASCAR livery? That’s right, nothing.

Do you now fancy adding a race car to your car collection? Click here to take a look through our race car listing s to see if you can find anything with a livery as cool as these…