These Are 10 Of The Worst Supercars Ever Made 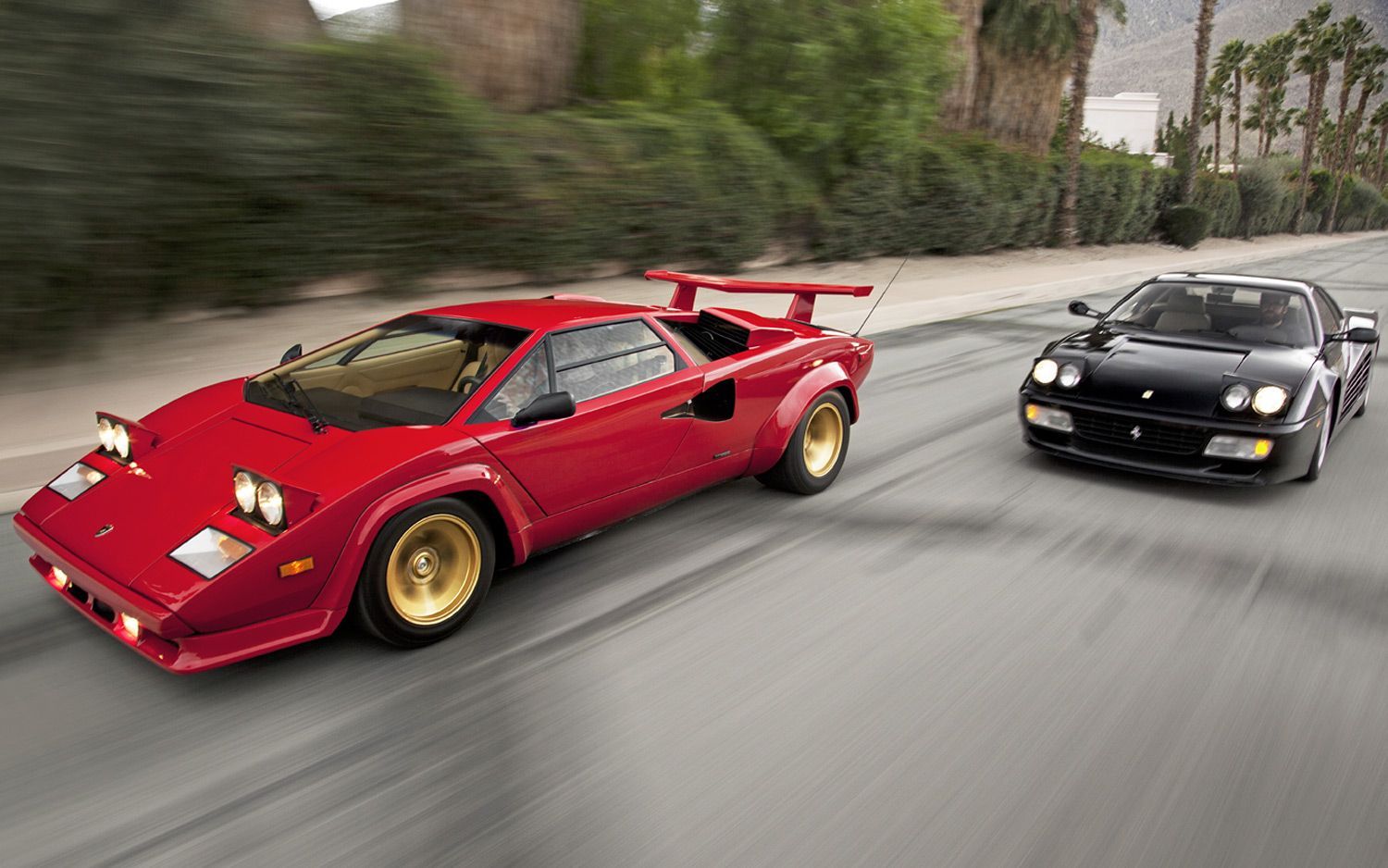 If you’ve been keeping in touch with us on our Facebook and Instagram pages, you’ll have noticed that over the last few weeks we’ve posted a few links to some of the greatest and goodest supercars ever made including a Ferrari F40 and a Porsche 959.

Yet despite the wall poster looks, the screaming engines, and the exotic-sounding names, the “supercar” tag doesn’t actually always translate into a car being actually any good.

Don’t believe us? Scroll down to find out more… 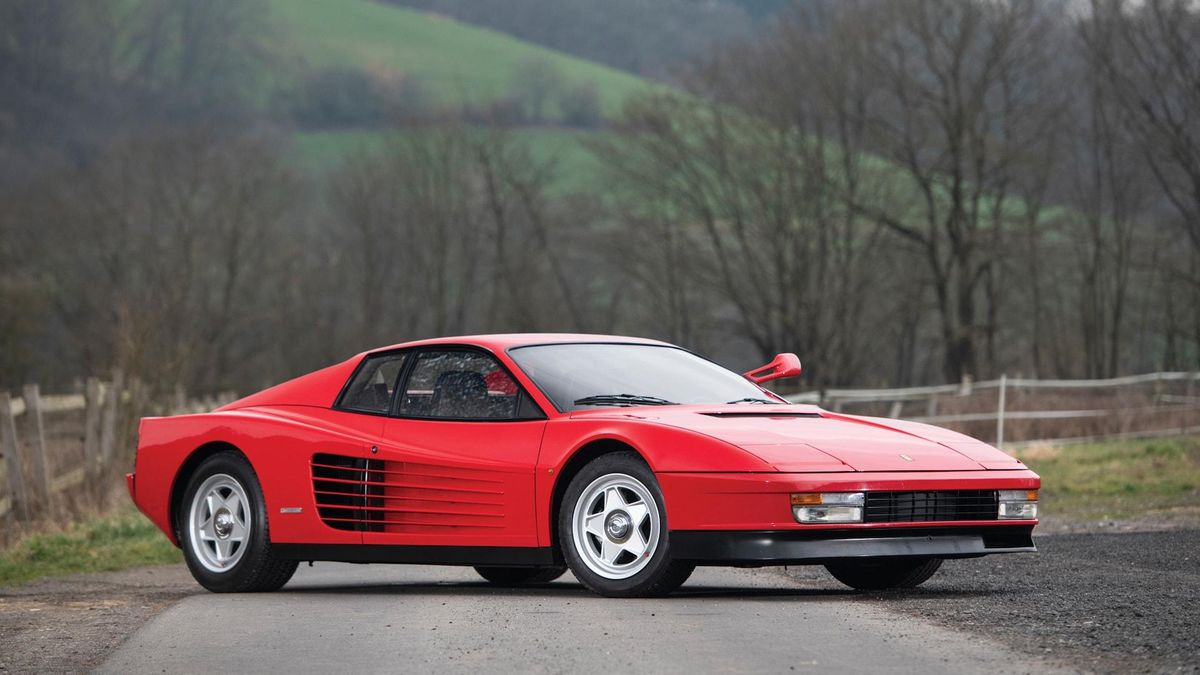 Despite its legend as a 1980s icon, the Ferrari Testarossa is fundamentally a bit naff
© Motortrend

In terms of being an automotive icon, there’s plenty to love about the Ferrari Testarossa. Its Pininfarina design is an all-time classic, and the 4.9-litre flat-12 engine sounds truly exquisite. Yet despite its appearance, this poster child of the 1980s isn’t actually very good as a car. The width of the 385bhp V12 motor gave the Testarossa an unusually wide track for a car of its type, which made for poor handling at best and an utterly terrifying driving experience at worst. Given Italian supercars of the 1980s, the Ferrari Great Big Tosser was also badly made - deteriorating seals and hoses were a particular bugbear for owners - and maintenance cost a fortune. 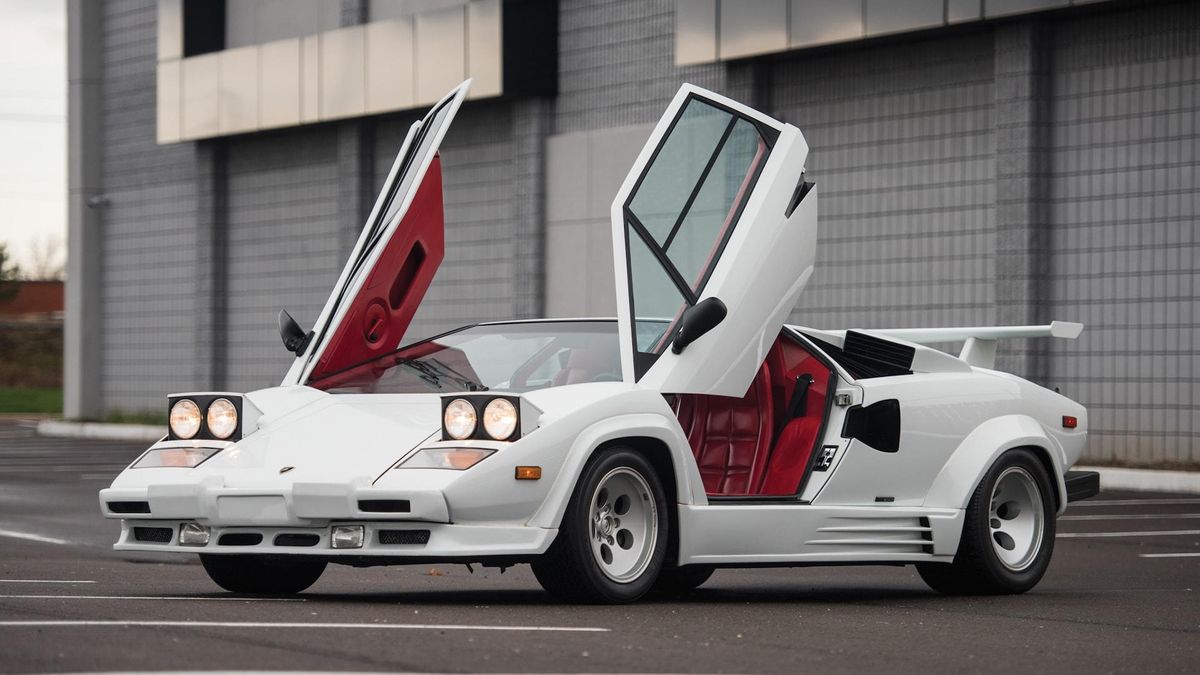 Like the Ferrari Testarossa, the Lamborghini Countach is a 1980s icon and even worse to live with than its Maranello counterpart…
© Motortrend

If this were entirely down to our Editor, he’d write “all Lamborghinis are ridiculous” and that would be the end of this section. Unfortunately, he’s contractually-obliged to write more than that, so here goes. Like the Ferrari Testarossa above, the Lamborghini Countach is an automotive icon. Akin to the Maranello machine, it also became a poster car of the 1980s and made a number of TV and film appearances in everything from Miami Vice to Rocky IV. What’s more, it was penned by Marcello Gandini, and powered by a whole gamut of V12 motors. The things that made the Countach a four-wheel liability were as follows: frightening handling, poor visibility, a crooked driving position, an overheating engine, and fizzy electronics as-per a car of its time. In fact, the quality of the car was so shoddy, the US government banned Lamborghini from selling it stateside as it was considered as a safety hazard. Finally, the ‘Countach’ moniker sounds like the centre-fold pages of a 1970s bongo mag. 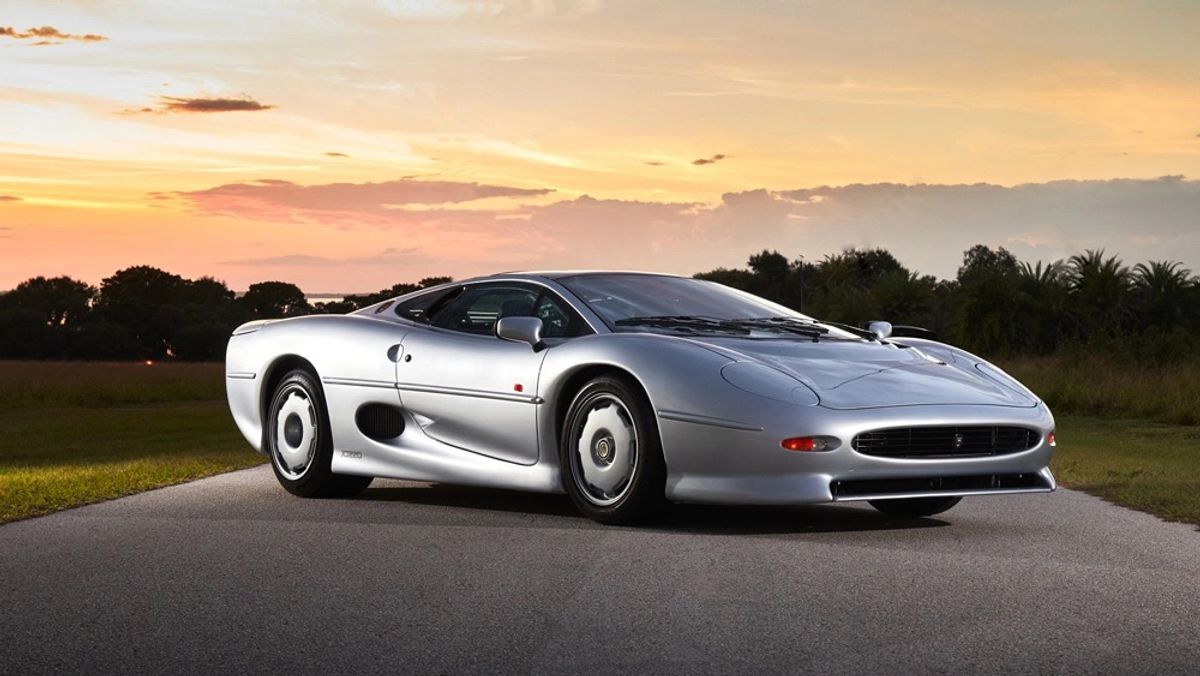 Despite downsizing the engine from a V12 to a V6 and fitting rear-wheel-drive instead of AWD, the XJ220 was a better car than Jaguar originally planned
© Autoevolution.com

The Jaguar XJ220 wasn’t necessarily a bad car, it just wasn’t exactly what Jaguar told potential buyers it would be. Initially, the XJ220 was promised to be Britain’s flagship supercar, with V12-power and all-wheel-drive to show the Italians and the Germans how things should be done. Unfortunately, Jaguar hadn’t done its homework properly and it transpired that fitting the car with the 6.2L V12 and the AWD system would prove way too heavy and compromise its handling. To get around the issue of a potentially-frightening drive, Jaguar fitted the XJ220 with a twin-turbo 3.5L V6 producing 542bhp and rear-wheel-drive. Whilst the changes made for an overall better car, those on the waiting list expecting a V12 behemoth with buckets of grip ended up disappointed and lawsuits were filed. When XJ220 production ended in 1994, only 275 cars were made. Their asking price of £470,000 each also made it one of the most expensive cars on sale at the time. 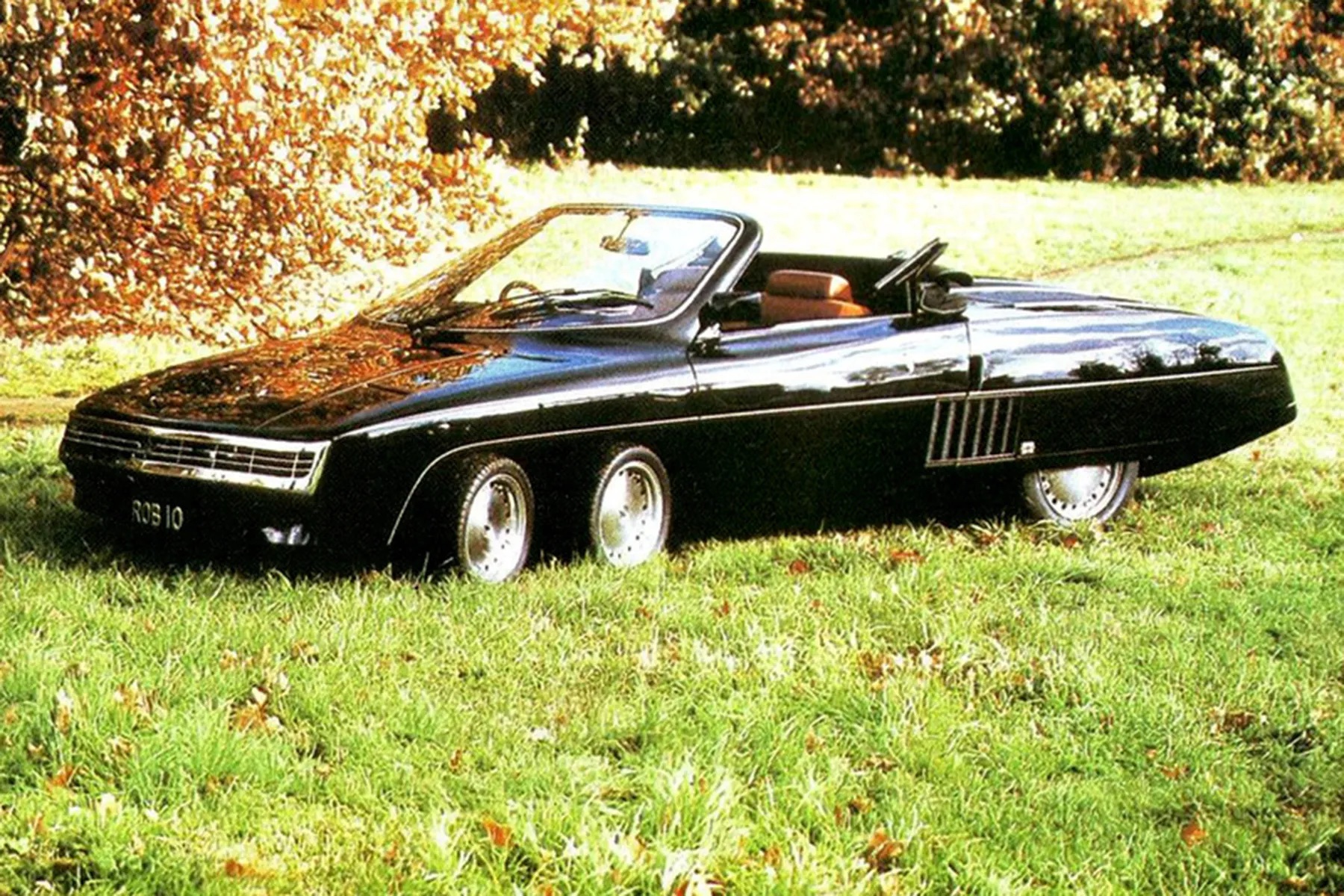 Given that the British are usually good at this engineering thing, it’s a surprise to find out that the six-wheeled Panther 6 came from the UK. With four wheels over the front axle and two at the rear, the Panther was set to redefine what a supercar was. To boot, it had an 8.2L Cadillac engine and was allegedly capable of 200mph. Inside, the Panther 6 was said to be packed to the hilt with all sorts of goodies, including a TV, digital dash, an automatic fire extinguisher, and an onboard carphone. Again, all of this is hearsay as nobody really knows apart from the owners of the only two Panther 6s ever made. What is true though, is that this mysterious machine was inspired by the Tyrrell P34; a six-wheeled Formula 1 car described by Jody Schekter as “a piece of junk.” 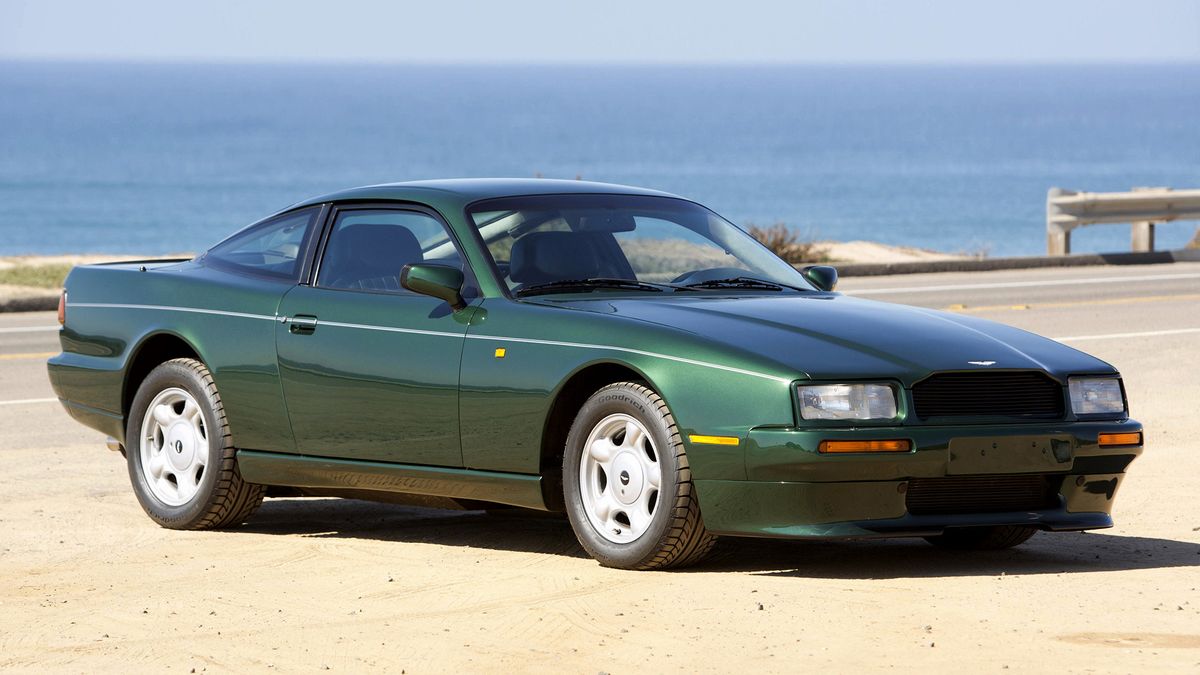 Despite its decent looks and meaty V8 engine, the Aston Martin Virage was very much a parts bin special
© Supercars.net

Despite its turbulent past, the last decade or so has been a time of relative stability for Aston Martin. Furthermore, 2004 to now has seen arguably Britain’s most-loved sports car maker produce some of its finest all-round machines including the DB9, DBS, V12 Vantage, and the latest V8 Vantage. What you see above - the Aston Martin Virage - is neither from Aston’s recent history, nor is it anywhere close to being one of its best creations. Ok, its 5.3L V8 produced a respectable 330bhp and could reach 62mph in around six seconds, but that’s around where things stopped being decent. The Virage was spongy to drive, and badly put together. What’s more, these parts were not even made by Aston Martin; the head and tail-lights were sourced from Volkswagen/Audi, the interior - whilst trad colonial club wood and leather - was smattered with switchgear from General Motors, Ford, and Jaguar. The price for this Aston Martin Parts Bin Special when it launched in the early 1990s? A whole £120,000 - or in today’s money - £200,000. 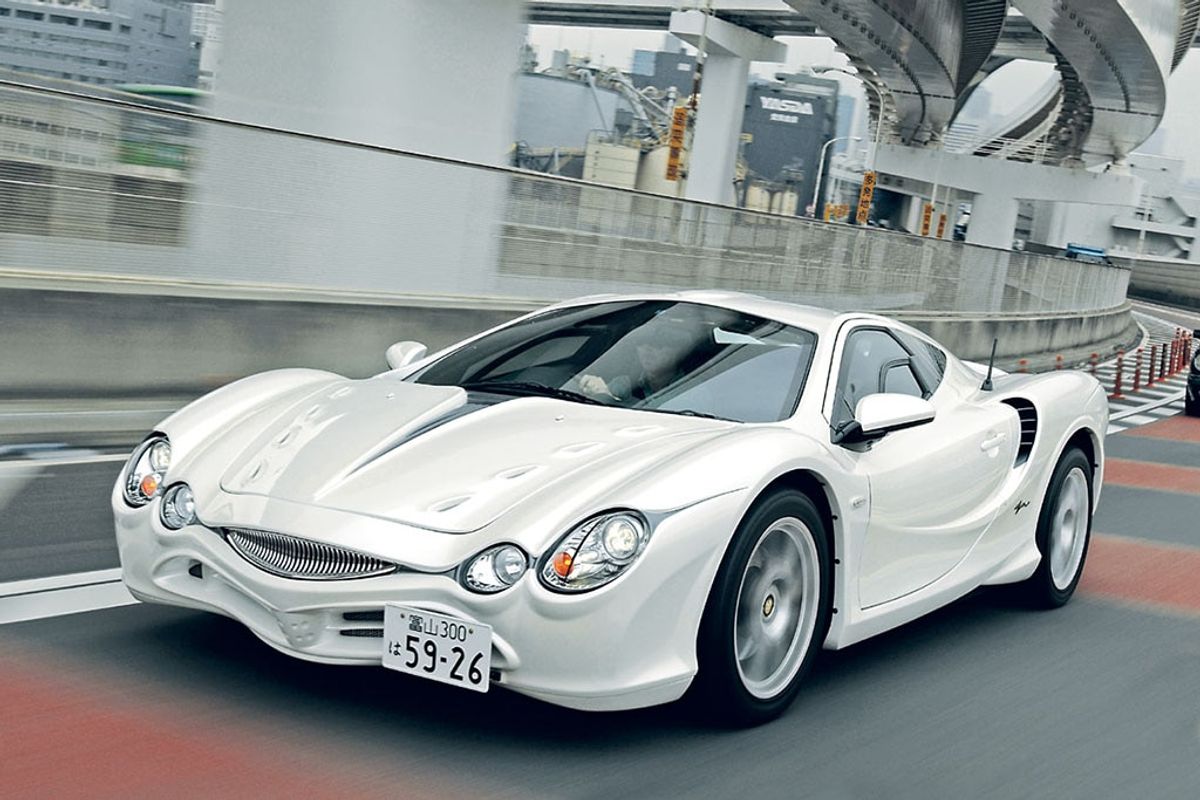 The Mitsuoka Orochi - the only car that looks like its had its arse pinched
© Autotrader.com

Well then, what do we have here? Well, this surprised-looking thing is the Mitsuoka Orochi, a “fashion supercar” based on the first-gen Honda NSX and a machine supposed to rival anything from Italy. Yet whilst the NSX’s design has stood the test of time, the Orochi launched in 2006 with the face of a bottom feeder taken completely by surprise. What’s more, the design - apparently inspired by an eight-headed Japanese dragon - earned this strange car the unfortunate accolade of “the world’s ugliest car” from Jalopnik. Under the skin of the Orochi was a mixed bag of Lexus and Honda parts, which made it at least reliable. Yet despite having a 3.3L Lexus-derived engine, the Orochi produced 231bhp and reached 0-60mph in a leisurely seven seconds. Hardly Maranello troubling, is it? 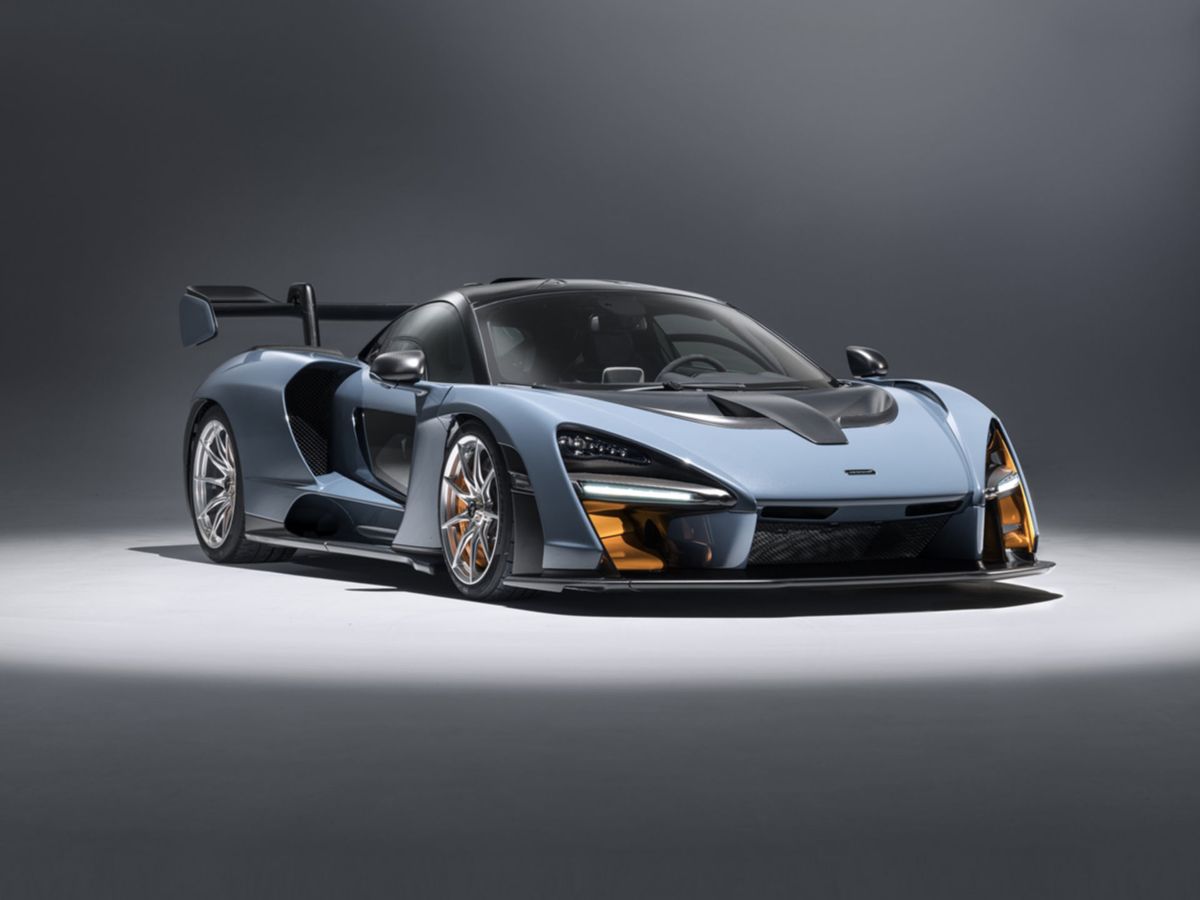 On paper, there isn’t much wrong here. With a twin-turbo, 789bhp V8 and a kerbweight of just 1,374 kilograms, the McLaren Senna the fastest, track-focused road car that the British automotive powerhouse has ever made. It even has a starting price of £750,000, and everyone knows that part of the whole supercar “shtick” is an enormous price tag. Yet here’s where things go south, the name - ‘Senna’. Ayrton Senna, whilst undoubtedly a prodigious talent, is also a controversial character. What’s more, people who call anything to their name ‘Senna’, whether it be offspring, a pet, or - as you see here - a car, then they show themselves to immediately be the sort of people you’d try and avoid in a pub. Such is the name Senna, that McLaren should go all the way and name the rest of their UTTER TRACK WEAPONS after other Formula 1 LEGENDS in its history. No, actually, - they shouldn’t because names like the McLaren Ron, the McLaren Nigel, and the McLaren David sound - like the ‘Senna’ moniker - utterly ridiculous. 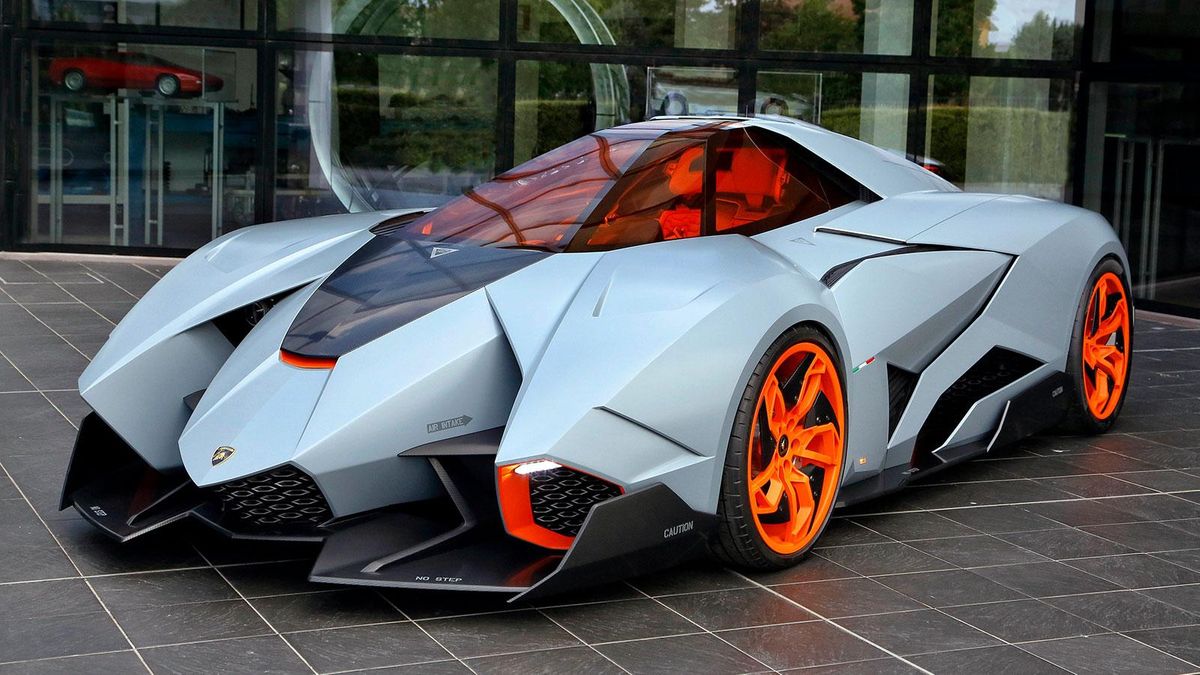 Oh dear, oh dear… where do we start? What you see above is not from the Hot Wheels academy of design. Oh no. This is the Lamborghini Egoista, a 1-in-50 hypercar produced to celebrate five decades of the Italian carmaker’s birthday. There is absolutely nothing subtle about this one-seater car based on the rather nice Gallardo. The 1,300bhp Egoista has a cockpit design based on a fighter jet, and to get in-and-out, you have to remove the steering wheel… just as you would do on a prototype racer or an F1 car. If all of this didn’t mark you out as enough of a prize arsehole, Egoista means ‘selfish’ in no less than 10 languages. 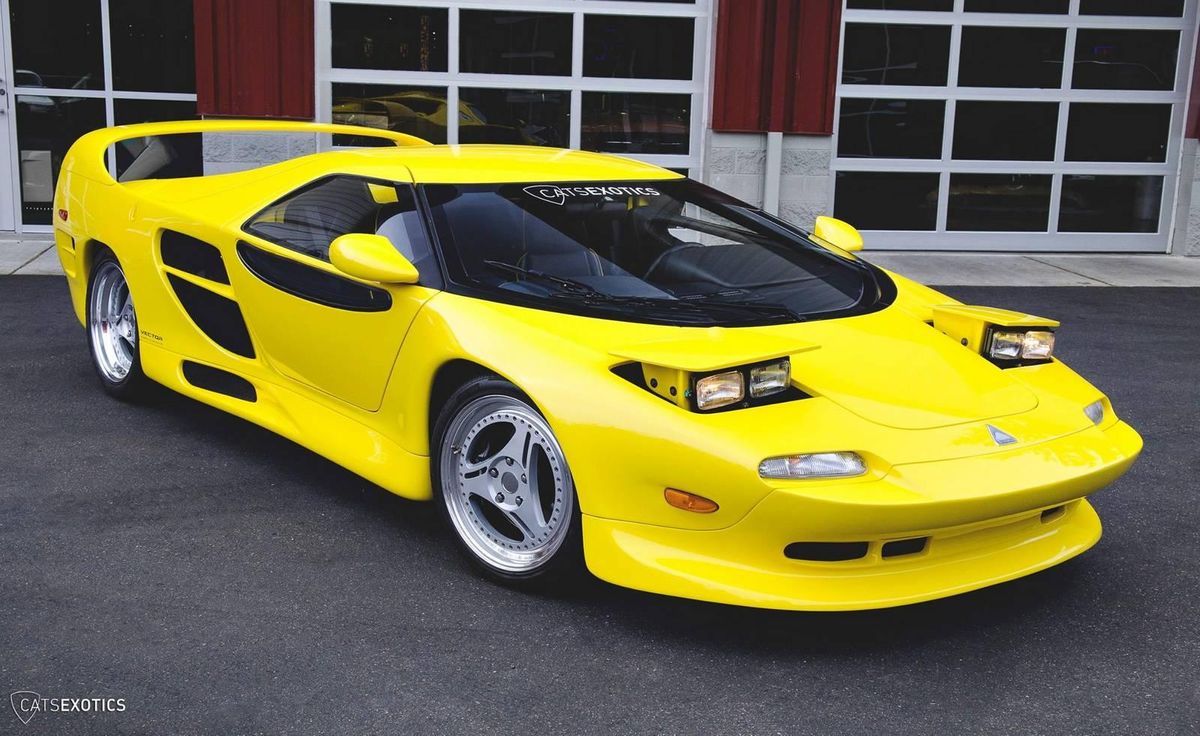 Underpinned by a Lamborghini Diablo, the Vector M12 was a far cry from the original car it was based on
© GTSpirit

If you’re a fledgeling supercar manufacturer, then the idea of building your very first around the chassis, mechanicals, and V12 engine from a Lamborghini Diablo won’t be found under the ‘Sensible Things To Do’ folder on your desktop because Italian carmakers during the 1990s. However, that’s exactly what Vector Automotive did with its first supercar, the Vector M12. Unsurprisingly to pretty much everyone, the M12 proved to be wildly expensive to make so Vector replaced the V12 with an 490bhp LT1 V8 from General Motors and rebranded the M12 the SRV8. Given Vector’s knowledge gap when it came to building supercars and its shoestring budget, the SRV8 was wheezy, shoddily built, and from certain angles resembled a Komodo Dragon. Just uglier. To add insult to injury, Jeremy Clarkson described the Vector M12 as “the worst car ever made.” 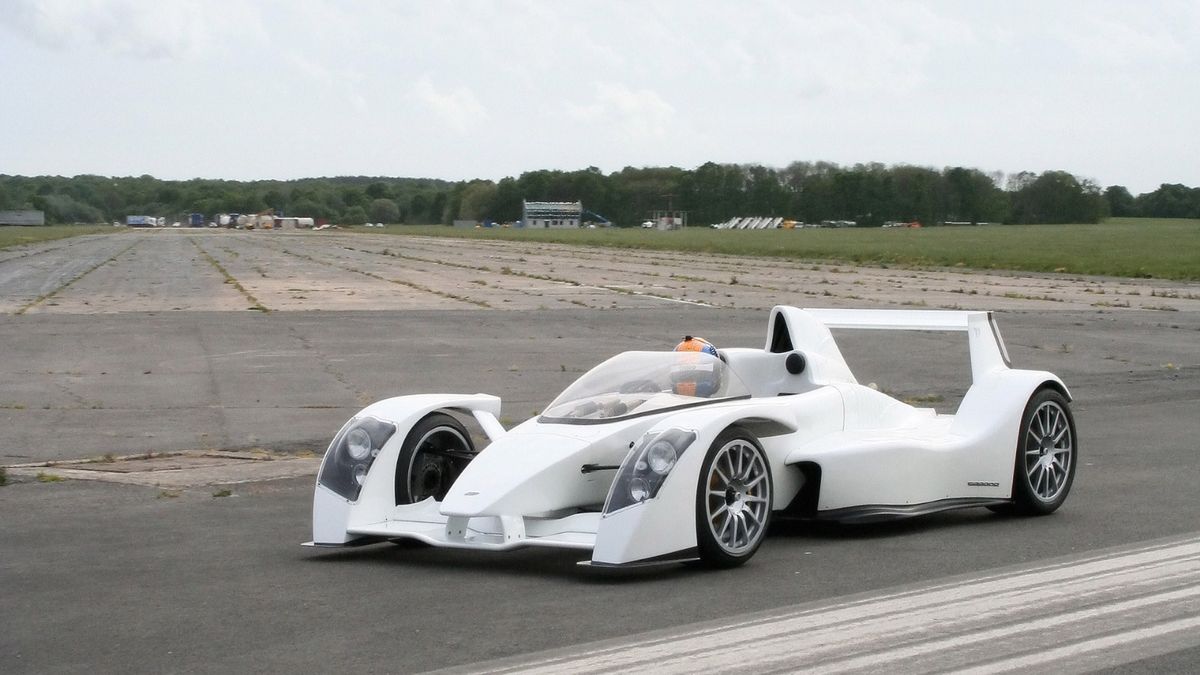 Billed as a Formula 1 car for the road, the Caparo T1 - with its 575bhp IndyCar-sourced V8 and 470kg kerb weight - certainly was fast with a top speed of 205mph. But those two things were about as good as it got for this Hampshire-built machine. Throughout its life, the Caparo T1 was plagued with a litany of reliability problems. During its launch, a suspension failure caused a Dutch journalist to veer violently off the road. Then things got worse. Much worse. Whilst filming an episode of Fifth Gear, one car caught fire at 160mph. Similarly, during a Top Gear shoot, the floor fell out of another whilst Clarkson was at the wheel. In one of the biggest automotive shocks of the 21st century, Caparo fell way short of the original sales target of 25 cars its set per-year when it launched the T1 in 2007. By the time the company folded eight years later, it had sold just 15 of them.

Now you know the absolute lemons to avoid, click here to browse through the 1,000s of exotics and supercars we have listed on Dyler.com