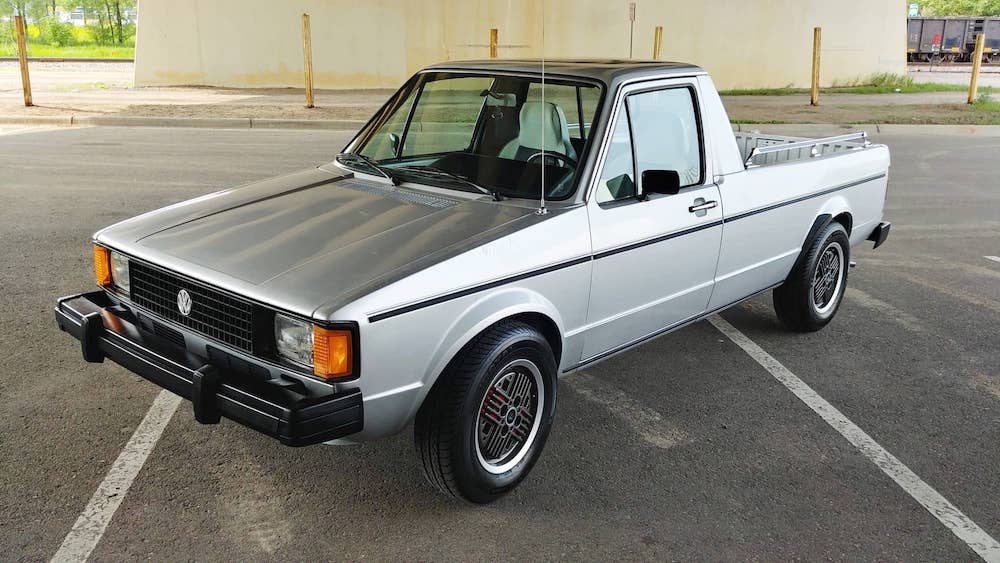 Love ‘em or hate ‘em, the SUV is here to stay. Why? Because people like driving something that’s not a usual sedan, hatchback, or wagon. After all, the sales figures speak for themselves.

However, if you’re firmly in the anti-SUV camp and have a thing for classic cars, there is another way you can drive something that’s out of the realms of the ordinary - hop forward the Volkswagen Rabbit Pickup. 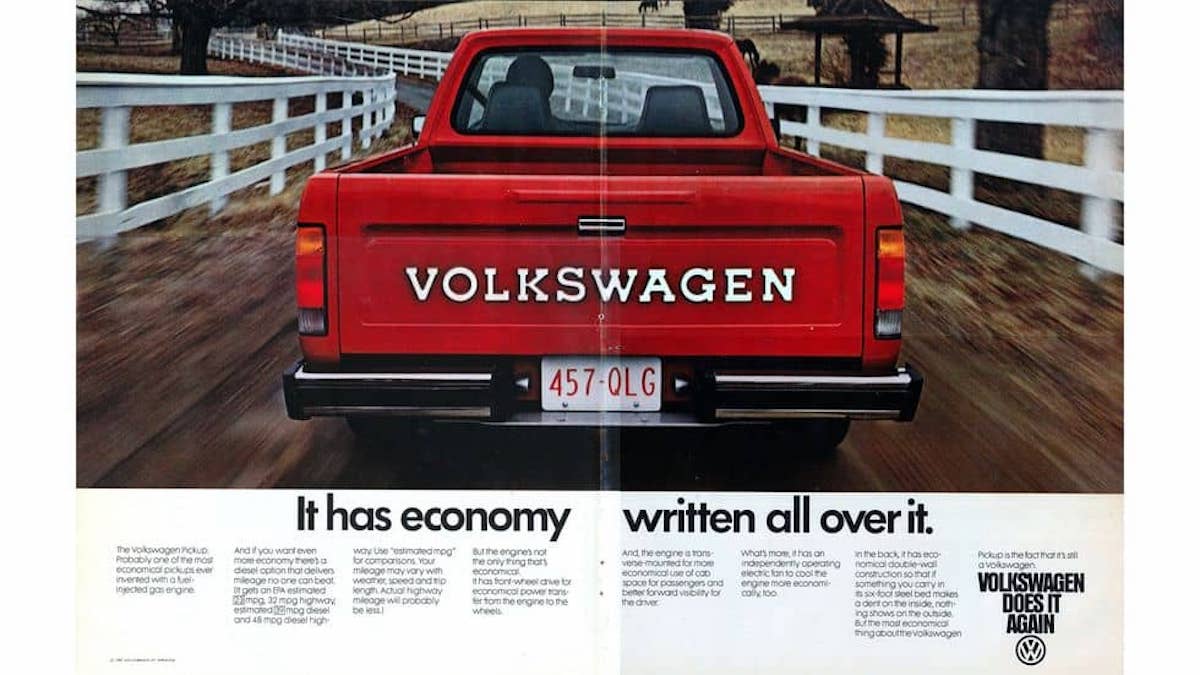 Like the Beetle before it, the Rabbit Pickup was also part of a memorable Volkswagen North America marketing campaign
© Autoweek.com

We’re mad as march hares for the VW Rabbit Pickup - it’s one of those cars that has truly won our hearts. It’s obscure, has an unusual history, and like the Beetle and the Mk1 Golf (or “Rabbit” in the United States), was a ubiquitously practical Volkswagen answer to a problem. The Rabbit Pickup is also incredibly cool. Like, stupidly so.

Surely by now you’re twitching to find out why this neat little Volkswagen truck remains a perfect antidote to the SUVs of this world despite being over 40 years old. If you scroll below and lettuce explain, things will all start to make sense… 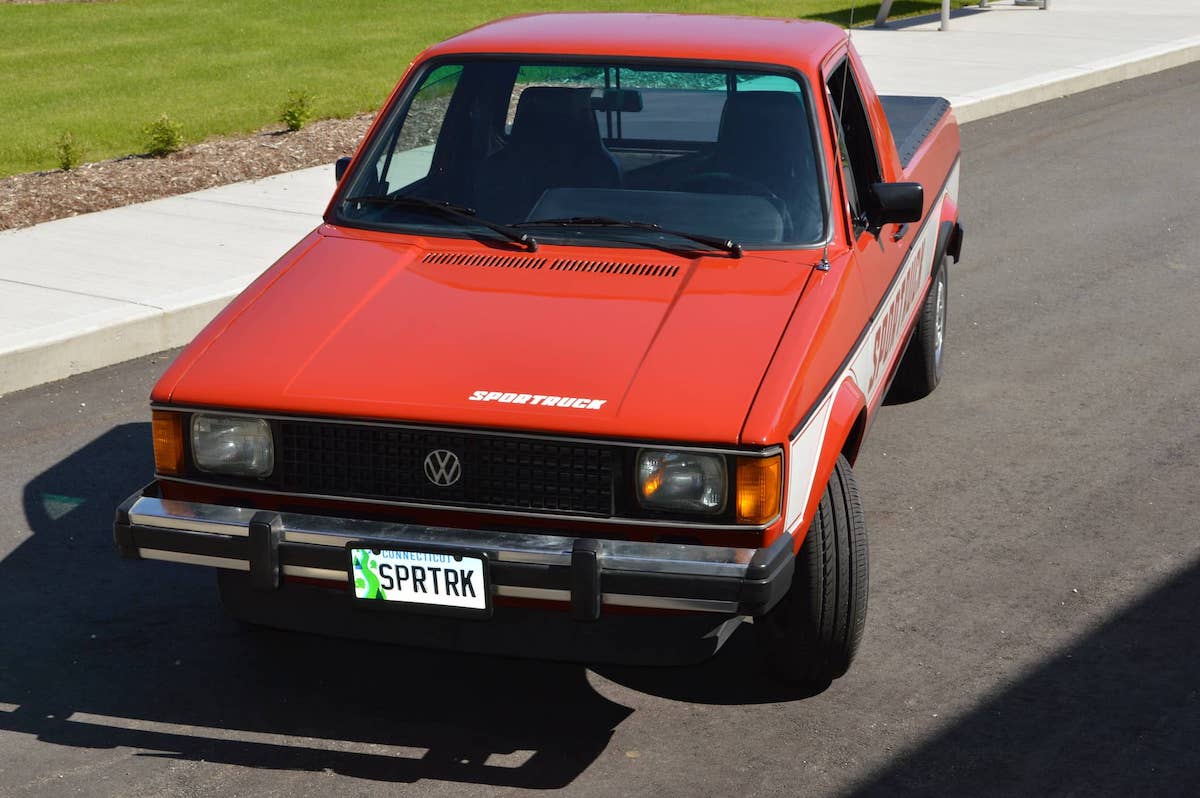 The Westmoreland factory was be the home to the Rabbit, Mk2 Golf, and Jetta, but its success would be short-lived and it ceased operating a decade after opening
© Mark Bednarz/Flickr

Whilst eventually sold in Europe as the ‘Caddy’, the Volkswagen Rabbit Pickup was first rolled-out in the United States as a practical, no-frills answer to the Oil Crisis of the late 1970s. Consumers in North America still wanted all of the practicality of their much-loved pickup trucks, but didn’t want the astronomical bills that came with them (sound familiar?!). VW - by then considered to be as American as Apple Pie on the back of the success it enjoyed with the Beetle and Bus during the 1960s - spotted a niche in the market and came up with this, the Rabbit Pickup, a small, fuel-efficient pickup as a response to the zeitgeist of the malaise era; a pure piece of automotive anachronism, if you will. 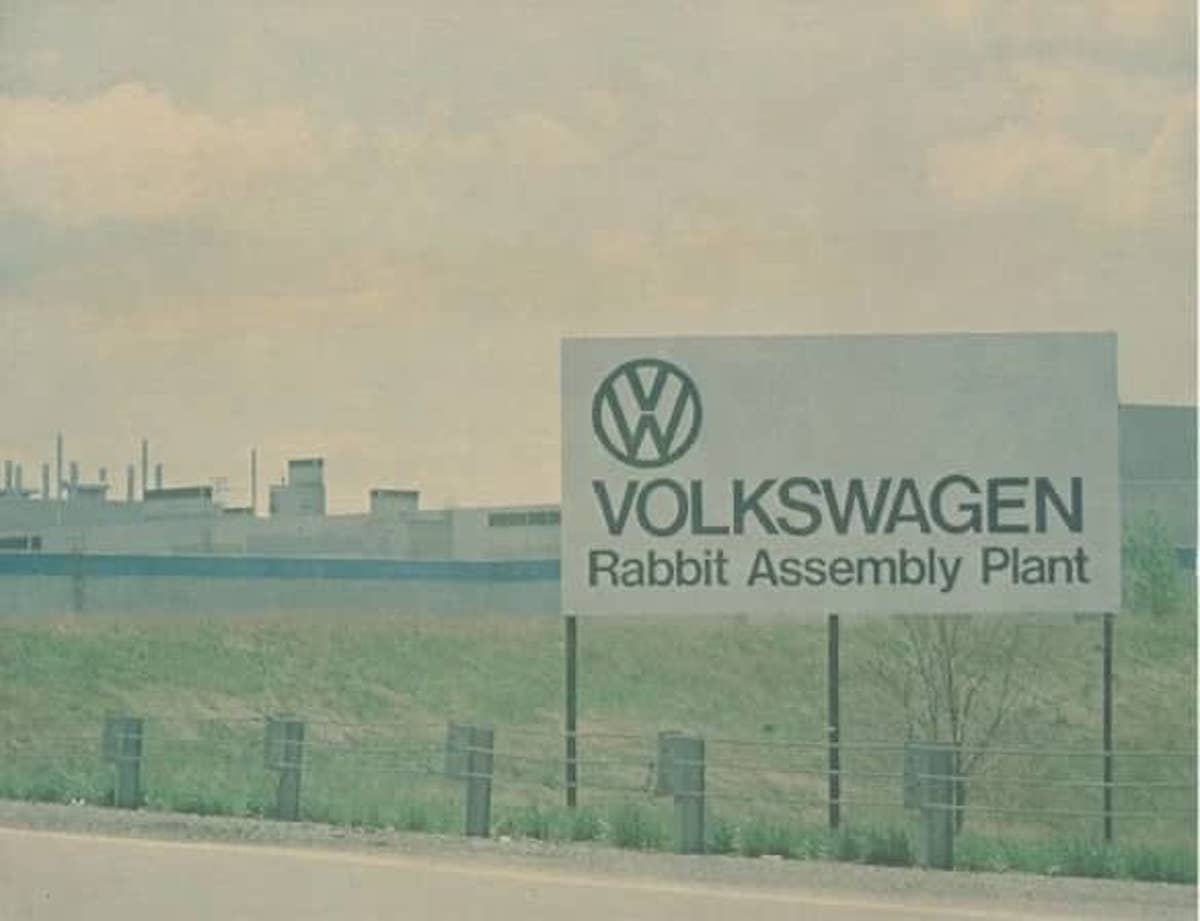 The Westmoreland factory was be the home to the Rabbit, Mk2 Golf, and Jetta, but its success would be short-lived and it ceased operating a decade after opening
© Nitter.net

The Rabbit Pickup was produced at the Volkswagen Westmoreland plant in Pennsylvania, which VW took over as an unfinished Chrysler factory in the early-to-mid 1970s. “Incomplete” would be an understatement - the 1,200 acre facility was but a few concrete walls in an otherwise rural piece of wasteland when Wolfsburg moved in. Nonetheless, VW needed to establish a market presence in the USA to counter the growing successes of Japanese manufacturers such as Toyota, Nissan (Datsun), and Honda. Upon completion in 1978, Westmoreland was responsible for initially producing the Rabbit and Rabbit Pickup, and that same year, the first car to roll off its production line was a white Rabbit in VW’s ‘C’ trim. The Jetta and Mk2 Golf would briefly follow in later years. Yet despite the initial optimism surrounding the plant, Westmoreland was beset with problems from the start, and by 1988 it was closed following strikes, job cuts, accusations of racism, and financial losses. Nonetheless, Westmoreland remains an important chapter in Volkswagen’s history, as it was the first North American factory to be set up by a European carmaker in the US since Rolls-Royce did so in Massachusetts in the 1920s. Since VW’s departure, the Westmoreland facility has been used as a factory for TVs and lithium batteries under different owners including Sony. In 2011, VW opened an all-new plant in Chattanooga, Tennessee, which currently manufactures the Passat, Atlas, and ID. 4 EV. The Chattanooga factory will play a crucial role in VW’s range-wide electrification drive by producing the all-electric ID. Buzz and ID. Crozz during the coming years.

The VW Rabbit Pickup Is Practical Without Compromising on Character 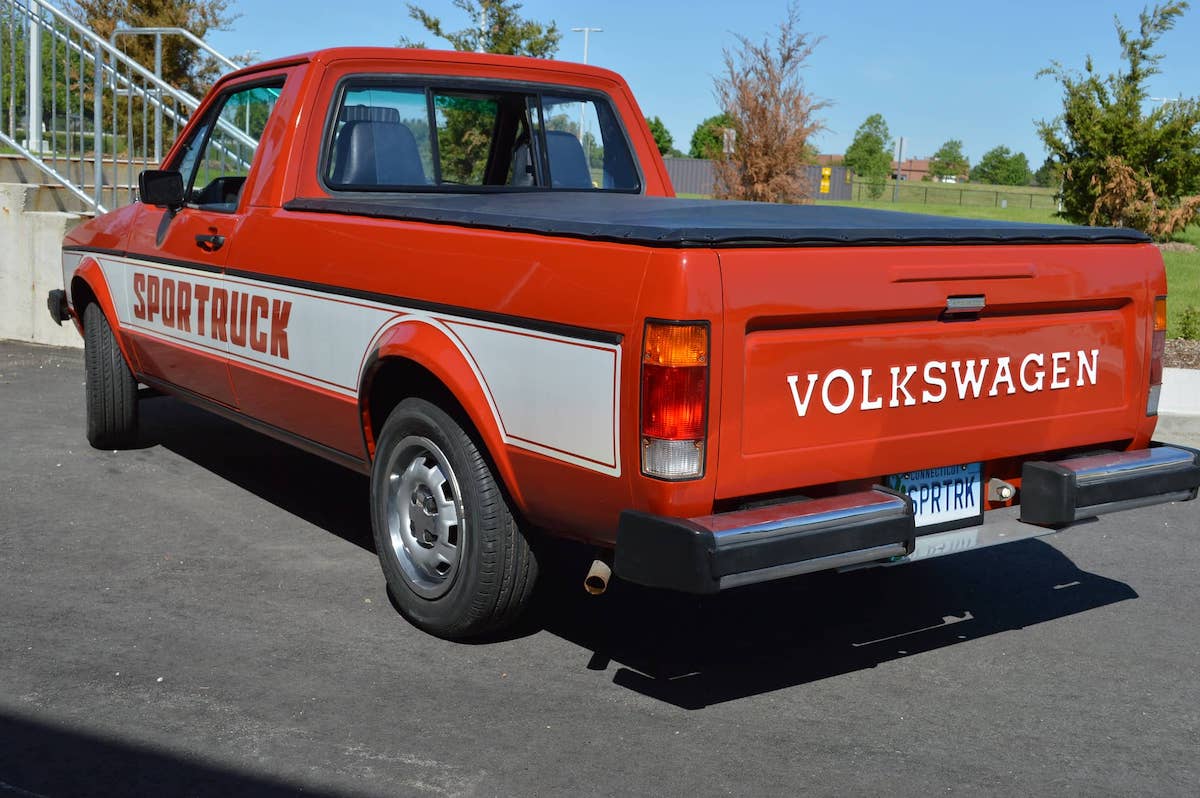 The talents of the little Rabbit Pickup were its 500kg hauling capacity and frugal 1.6L engines
© Mark Bednarz/Flickr

After VW lopped the tail off the original five-door Rabbit hutchback (sorry…) at the B-pillar and extended its wheelbase by fitting a small pickup bed at the rear, the Rabbit Pickup was nine inches longer than the standard car. In terms of hauling ability, VW’s humble truck could carry up to almost 500 kilograms on its six-foot bed; a none-too-shabby number given its humble hatchback underpinnings. What’s more, if something went wrong, spare parts were - and still are - plentiful and modestly priced given VW’s tendency to share components between vehicles. In performance terms, the Rabbit Pickup does neither hops nor skips along with any of the skittish urgency characteristic of its adorable namesake. Volkswagen offered the front wheel-drive Rabbit Pickup with a choice of two engines - a 1.6-litre petrol unit with 78bhp and 84 pound-feet of torque with a return of 32mpg, and a 1.6 diesel with 48bhp and 56 lb ft. of torque giving back 39mpg. Both engine types were available with five and four-speed manual transmissions, whilst an three-speed automatic was an optional extra on petrol-engined models. Whilst there is no getting around the fact that the Rabbit Pickup was lagomorphing behind when it came to speed, remember that not every car needs to be driven quickly, especially not one with as much character as this.

The VW Rabbit Pickup Is Completely Analogue, Meaning There Is Less To Go Wrong 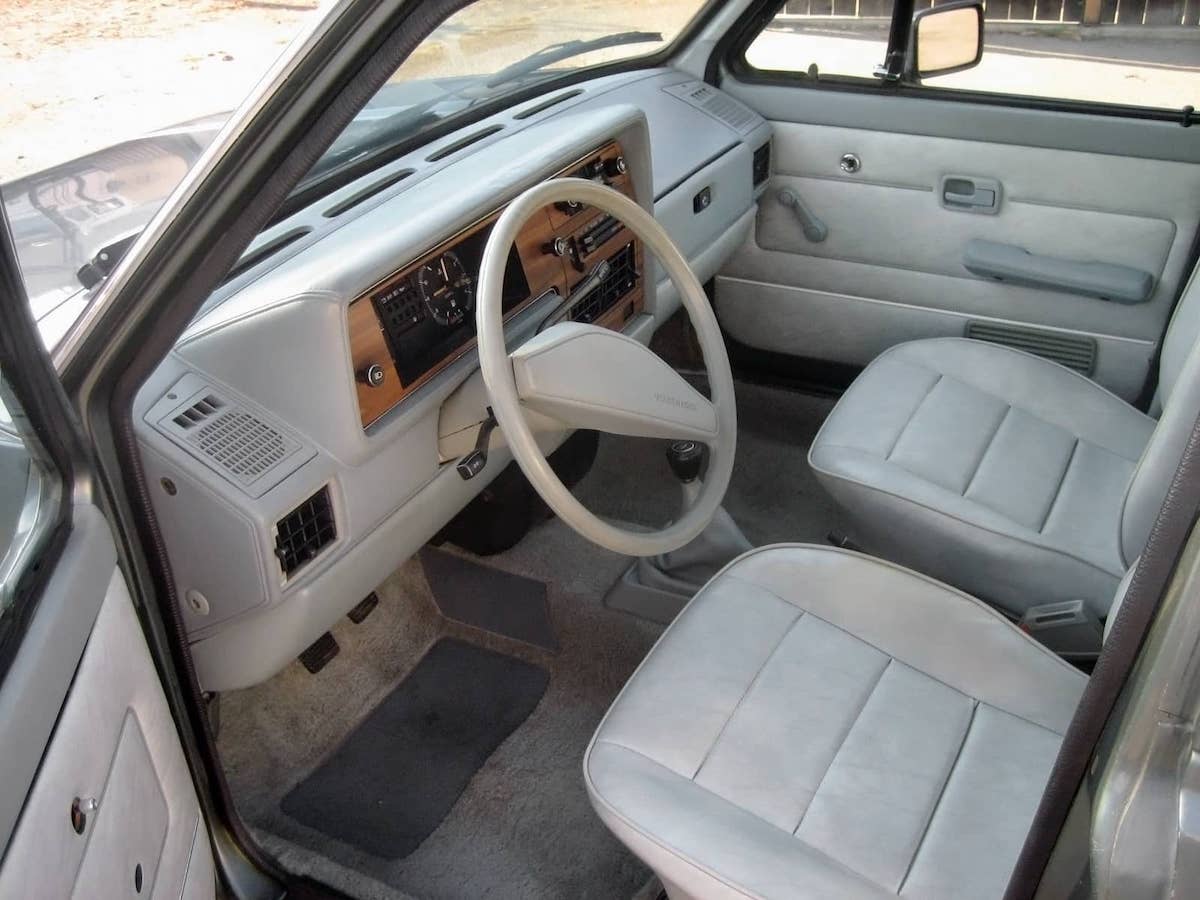 The Rabbit Pickup was (and still is!) much-loved for its simple, rugged, mechanically-friendly nature
© BarnFinds.com

Both the Volkswagen Rabbit hatchback and Rabbit Pickup were relatively simple, analogue cars, and simple means there is less risk of a major - and often costly! - component failure. The community surrounding the Mk1 Rabbit, Golf, and Rabbit Pickup is strong and full of friendly, helpful folk, so if you’re stuck for a part or simply seeking advice, then The Internet will help you out majorly. In our experience, VW Rabbit Owners, VWPartsVortex, TDIClub, and even good ol’ Reddit have been invaluable in contributing to our research for this story. Oh, and whilst you’re here, check out THAT interior above with the Westmoreland steering wheel… not a haptic button or screen in sight or in touching distance. 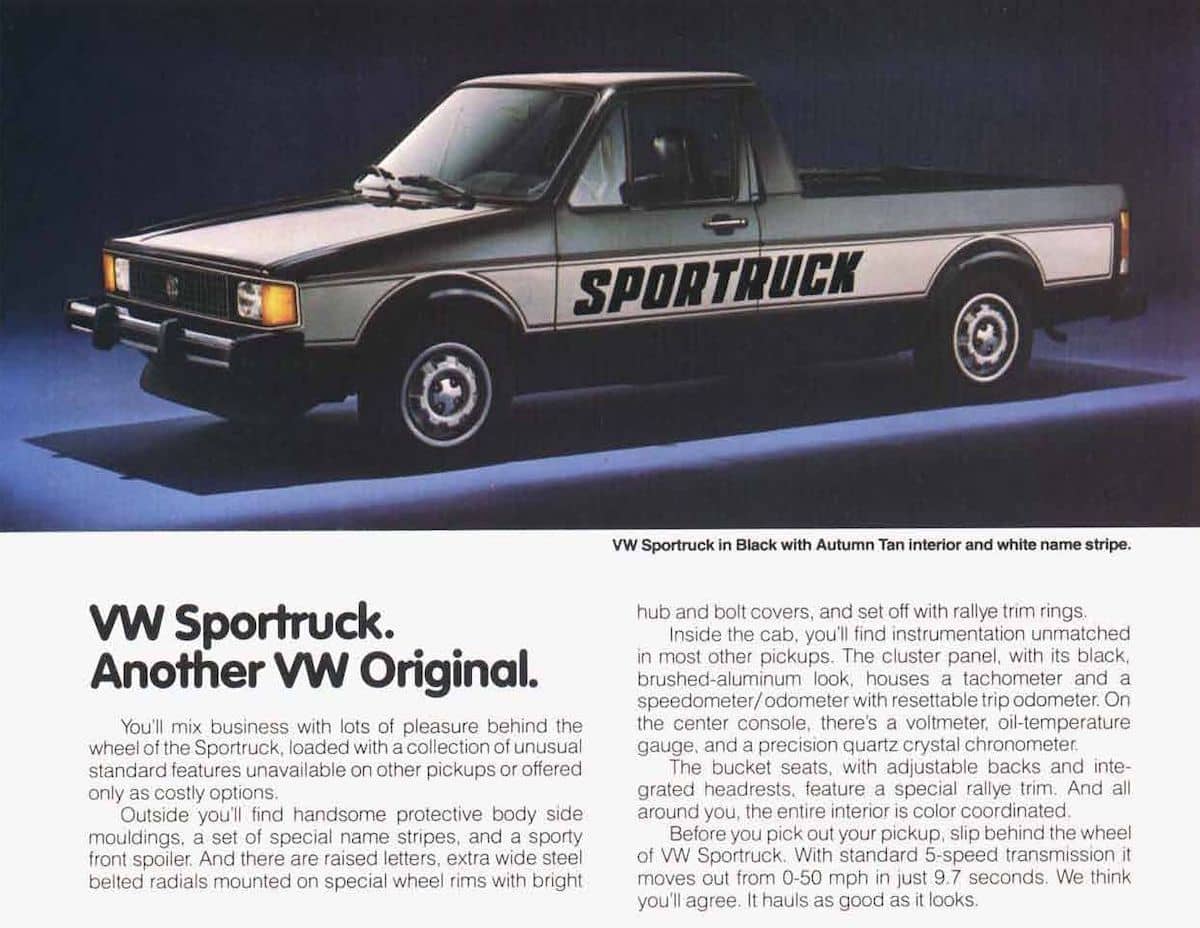 The Sportruck - the most sought after VW Rabbit Pickup of them all!
© RVTravel.com

The Rabbit Pickup is a rare breed. So much so, only 75,947 of them were sold from its introduction in 1979 up to when VW stopped production in 1983; a remarkably low number considering the Golf upon which it’s based has sold over 35 million units since it launched six years prior. VW offered the Rabbit Pickup in four trim levels, from the entry-level ‘C’ to the range-topping ‘LX’, which is the trim of the silver truck you see at the top of this story. Volkswagen also offered the Rabbit Pickup with a number of trim packages including the highly-desirable Sportruck option. Around 500 Sportruck editions were made, and to distinguish them from standard Pickups, VW fitted them with lairy Sportruck side-stickers denoting, special wheel rims, an upgraded color-coordinated interior with brushed aluminum trim, bucket seats, and a steering wheel lifted from the equally taste Mk1 Scirocco. In VW 2022 terms then, think of it as a Rabbit Pickup R-Line and you’ll not be wrong. The price of any Rabbit Pickup today will cost anything from $1,000 to $15,000 depending on its condition. As-per the golden rule of buying a classic car, always, try and buy the best you can afford - it’ll only end up costing you in the long run! 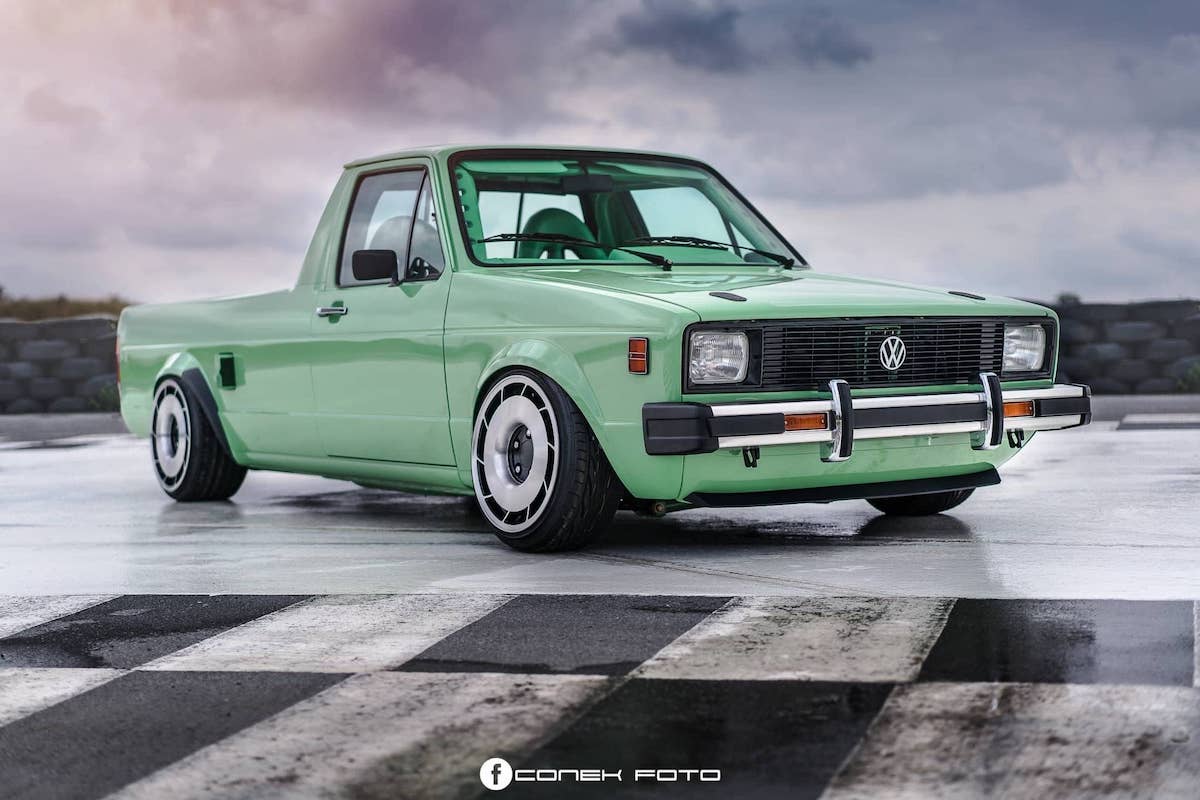 The Mk1 Volkswagen Rabbit has always been a darling with tuning types, and with plenty of spare parts the car’s mechanical simplicity, several Rabbits and Rabbit Pickups have garnered fame over the years thanks to their daring mods. Whilst we at Dyler.com are on the fence about tuning, there is something that tickles our funnybones about shoehorning a 4.2L Audi V8 into the back of the humble Rabbit Pickup to turn it into a Badass Bunny Truck - in fact, that’s exactly what the folks over at Poland’s Flygarage went and did. That’s right, that’s the mad mint green badass bunny truck you see above. Another modified Rabbit Pickup that well and truly captured our imagination is the VR6-engined White Goose, which set a class land speed record of 190mph at the Bonneville Salt Flats in 2013.

Have we convinced you that you need a Volkswagen Rabbit Pickup in your life yet? If we have, then click these blue words to browse the thousands of classic VW models we have listed on Dyler.com.