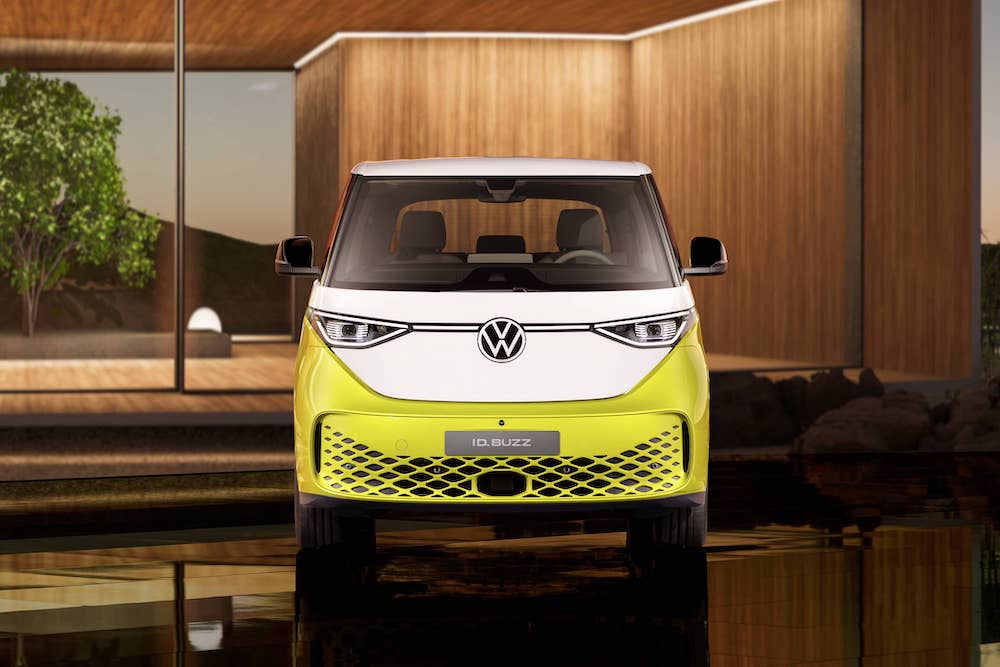 These are just some of the iconic names you’ll find when flicking through the pages of the extensive Volkswagen back catalog.

Yet on the back of the Dieselgate scandal, VW committed to an all-electric future, which started with the ID.3; the first of Wolfsburg’s ID. range of EVs.

The most recent member of the ID. family is the ID. Buzz; an all-electric version of the much-loved Type 2 reimagined for the 2020s and beyond. Retro styling and all.

The ID.3 split opinion when it launched for the 2020 model year largely down to its looks. However, the ID. Buzz seems to be one of those cars loved by everyone. To underline how endearing it is, it won the 2022 Top Gear Electric Car Of The Year award. High praise.

Is this the EV that has finally Made Volkswagen Great Again? Read on to find out…

What Is The VW ID. Buzz?

Volkswagen may introduce up to six versions of the VW ID. Buzz
© Volkswagen Newsroom

It's the feel good car of 2022! The Volkswagen ID. Buzz is an all-new version of the much-loved VW bus, the Type 2. Like the original, air-cooled VW Type 2, it has five seats, a sliding door on each side, a gargantuan amount of space for people, and room for 1,100 liters of 'stuff'. Unlike the original Type 2, the ID. Buzz is powered by a 204bhp, 77kW single electric motor, which can cover 200 miles on a single charge. Models with more range and power will be announced in due course. The ID.Buzz will go on sale later this year with prices starting around the £50,000 mark. VW will also make a panel version for the eco-conscious tradesperson.

How Has The VW ID. Buzz Made Volkswagen Great Again? 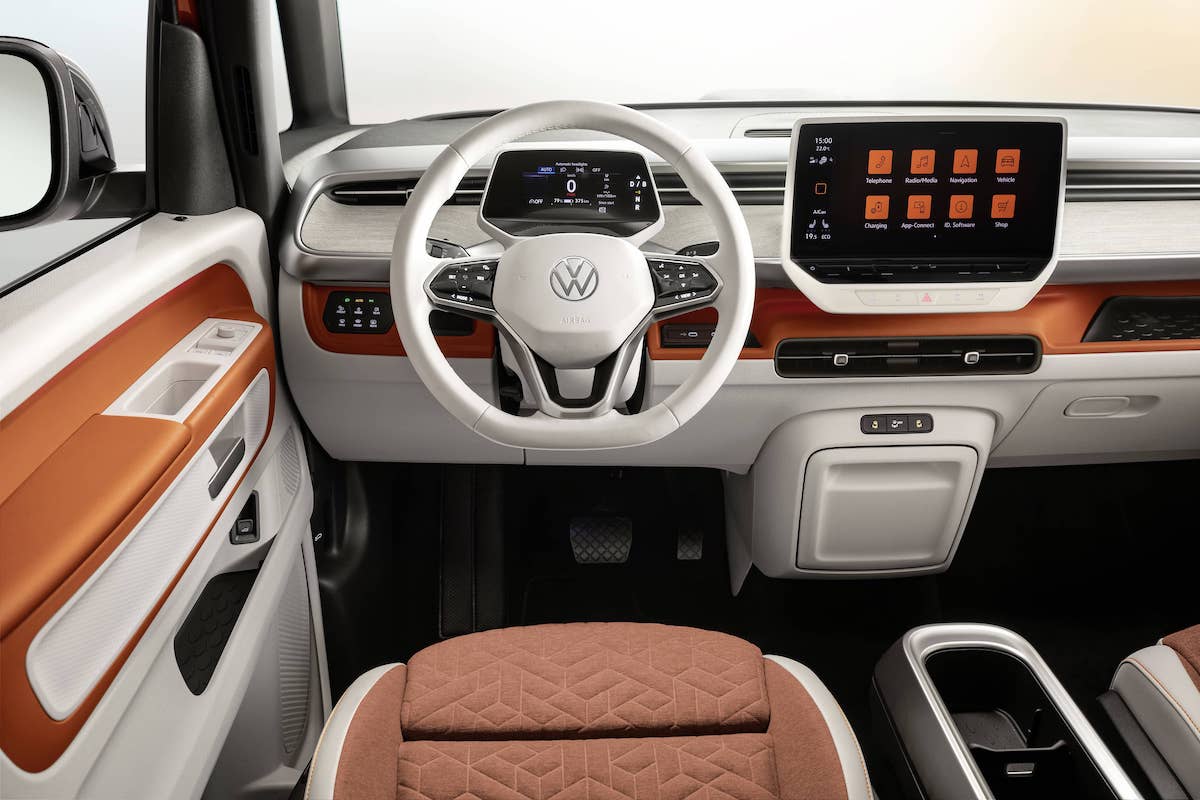 The Volkswagen ID. Buzz is based on VW’s MEB all-electric platform
© Volkswagen Newsroom

The ID.Buzz has finally shown that Volkswagen can still do what it has always done so well; making cars with bags of personality without doing anything daft. You buy a VW because a VW has always been The Nice Thing. A VW says “I am an adult”. You may well be thinking then, “why did they write ‘finally shown’ at the top of this section?” Well, first of all, let’s make it clear that we like VW’s ID. line-up, especially the ID.3 for reasons you’ll find out later. However, some of the most respected names in the automotive world do not share our enthusiasm for VW’s electrified models with Jason Cammisa referring to the ID.4 as a “shitheap”, a “rolling cartoon of poor design”. He even admitted that he “almost threw a brick through [its] fucking window”. Granted, early ID. cars suffered from a handful of teething troubles. Happily, VW assures owners and prospective buyers that these issues have now been fully fixed. Given the company’s track record of “getting stuff done”, we have full confidence in their statement. With the ID. line-up’s early issues now history, the ID.Buzz’s head-turning design, range, and reliability means that VW has certainly hit the jackpot.

So, Is The VW ID. Buzz The Only Electric Volkswagen? 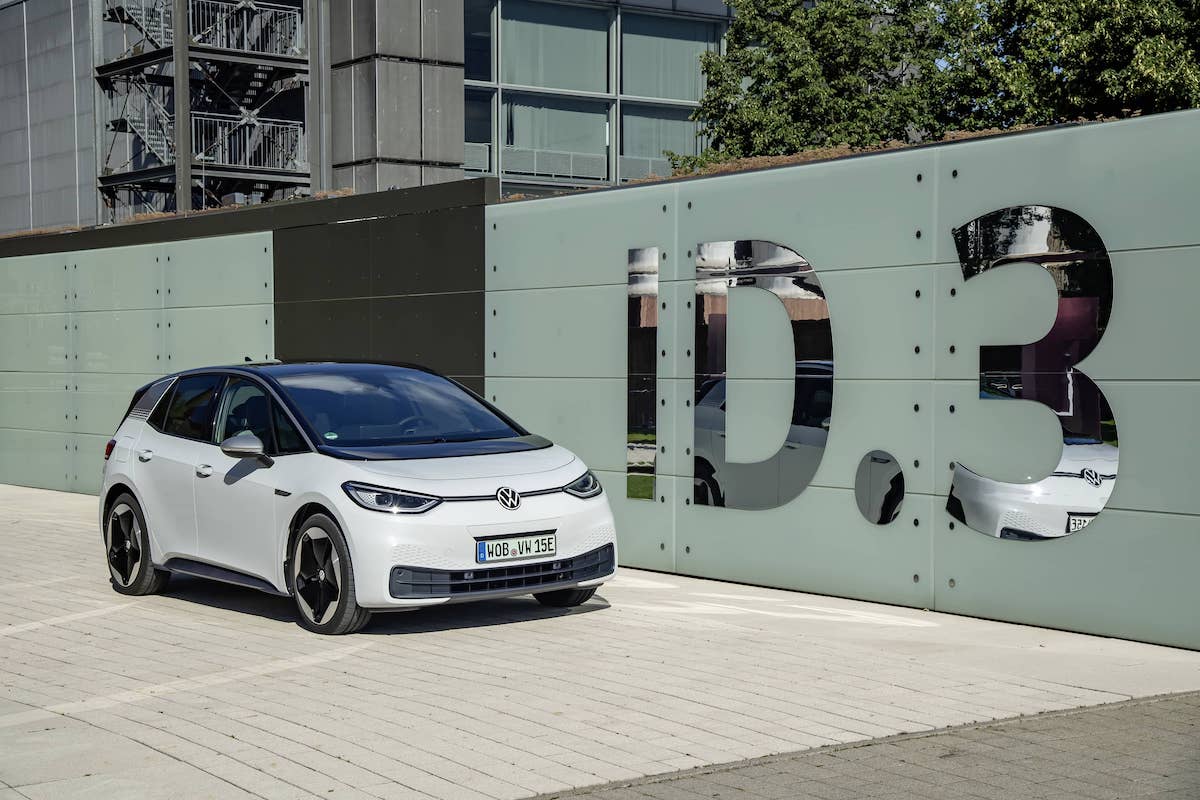 The Volkswagen ID.3 was a sign that VW was taking its electrified future seriously
© Volkswagen Newsroom

Nope. Volkswagen also makes the Golf-sized ID.3, the small ID.4 SUV, the ID.5 SUV coupé, and the Chinese market only ID.6; another SUV around the size of a Touareg. All of these ground-up EVs are made in various VW factories in Germany, the United States, and China. Wolfsburg has also shown a concept of the ID. Vizzion, an all-electric sedan replacement for the rather thoughtful-yet-forgotten Passat, and a concept of its entry-level EV, the upcoming VW ID. Life which looks mint. Of all the VW ID. cars though, the ID.3 is the most important of the lot…

Why Is The VW ID.3 Such An Important Part Of The Volkswagen Story, Then? 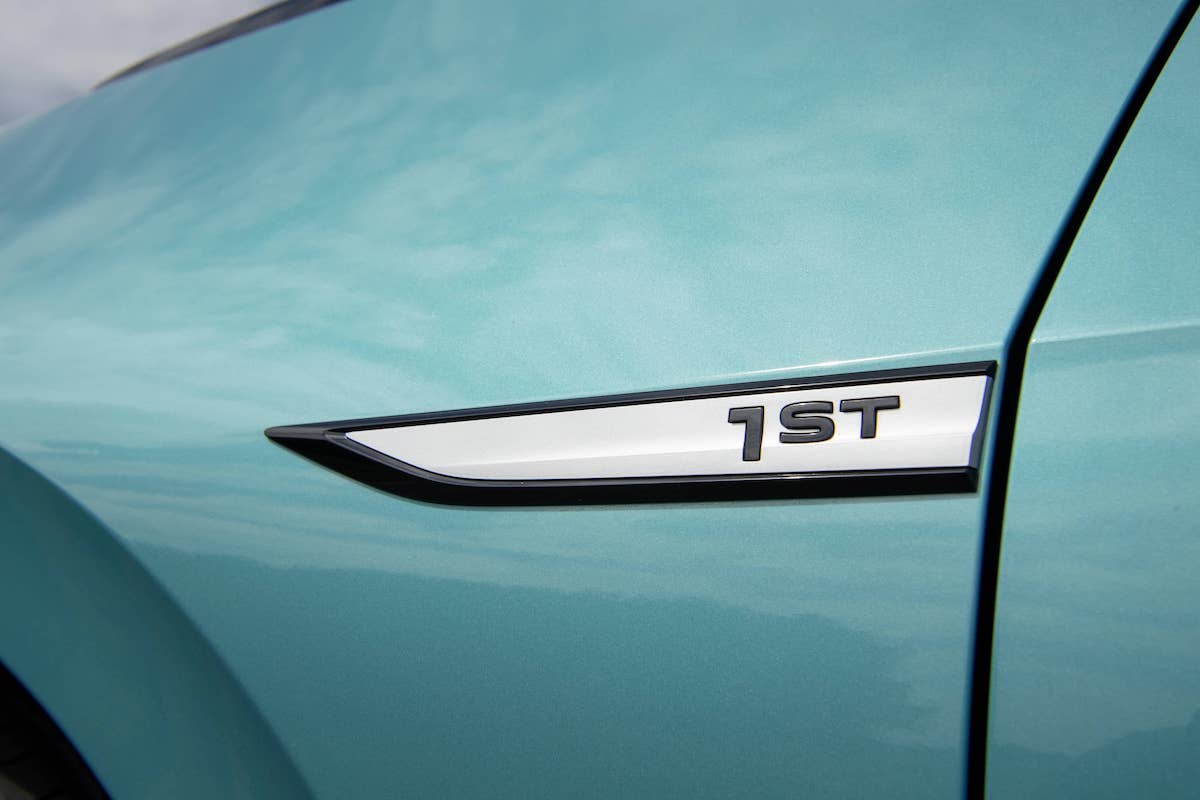 The Volkswagen ID.3 is the first purpose-built EV made by VW
© Volkswagen Newsroom

It’s no secret that Volkswagen has been experimenting with electric cars for some time. Back in the 1970s, it fitted a battery to its T2 camper to explore the benefits of electrified motoring. In 1980, it even did a short production run of the Mk1 Golf CitySTROmer; the first all-electric Golf. Over the years it has also made the Golves and Passats GTE, the e-Up!, and the e-Golf. As you’d expect, these are all rather lovely in the way that all VWs are lovely and comforting. The ID.3 retains all of these key VW qualities. However, it is built around a rather different philosophy - instead of being an electrified version of an existing ICE model, it is made using VW Group’s purpose-built, modular MEB platform, which was created specifically for EVs. The ID.3 then, is the first EV to be put together using the MEB architecture. Other MEB-based cars include the ID.Buzz, the ID.4, the ID.5, the Audi Q4 e-tron, the Audi Q5 e-tron, and the Škoda Enyaq. Like the Beetle and the Golf before it, the ID.3 is aimed at bringing affordable motoring into the mainstream; the ID.3, then, takes electrification to the nation. Oh, and if you were wondering, MEB means Modularer E-Antriebs-Baukasten or “Modular Electric-Drive Toolkit”. 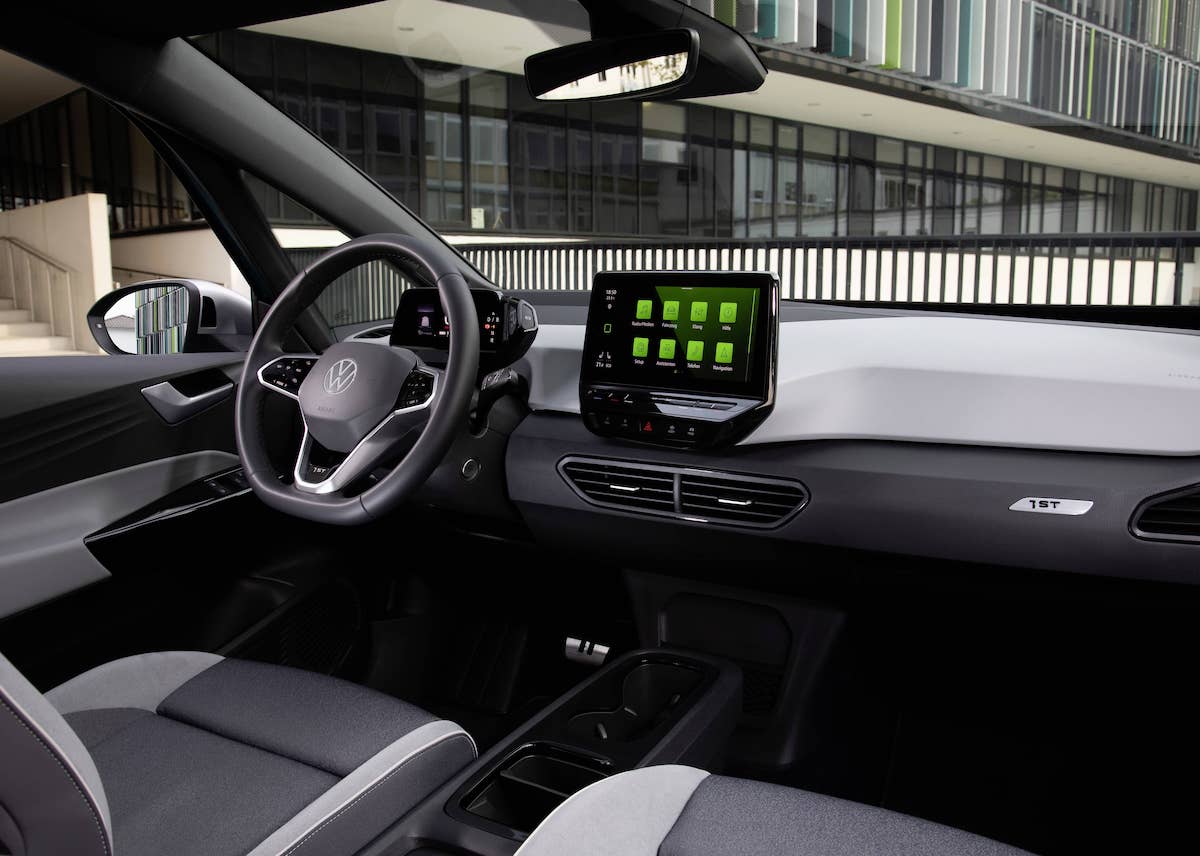 With plenty of natural light and space, the Volkswagen ID.3 interior has been designed with making all-electric motoring as easy as possible
© Volkswagen Newsroom

It’s everything you’d expect from a Volkswagen. Pretty much of the ID.3’s dials and switchgear are placed logically around the cabin. That said, the gear selector is a rocker placed next to the speedometer, which is a bit odd at first. Like most VW Group cars from recent years, the touch controls for the climate control are also enough to make a bishop swear. Like all purpose-built EV’s, the ID.3 is girthy. In fact, it weighs between 1,772 and 1,935 kilograms. With that in mind, VW has had to save weight. This means that some of the plastics are not exactly of the same vintage you’d find in the bombproof Mk7 Golf. Nonetheless, the ID.3 boasts a gimmick-free, spacious, comfortable cabin and its airy design allows for plenty of calming natural light. Not that you should be nervous in any way when driving the ID.3, because it has a range of up to 259 miles. Everything about the ID.3 shows it has been engineered with lovely, calm, electrified motoring in mind. Its interior is no exception.

Should The VW ID. Buzz and ID.3 Be Considered Future Classic Volkswagen Models? 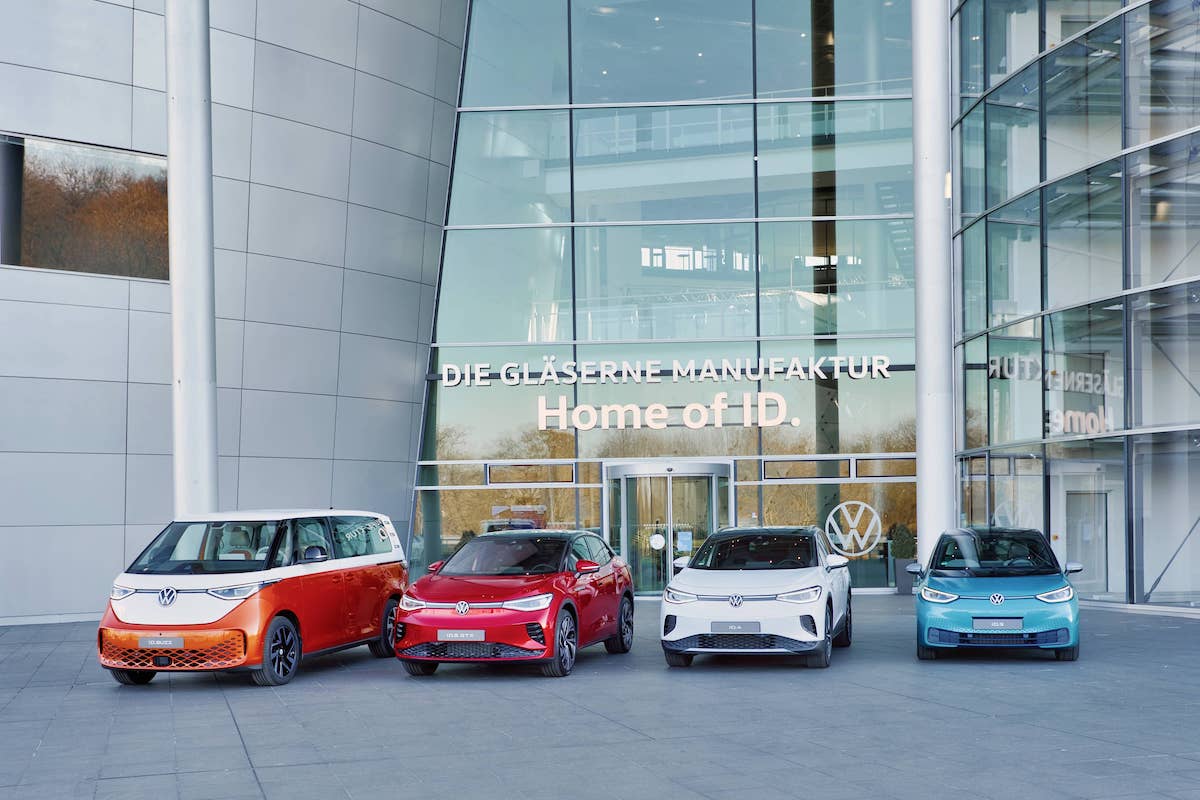 The Volkswagen ID. Buzz (left) and ID.3 (right) will almost certainly be future classic VWs thanks to their status as ‘firsts’ for the brand
© Volkswagen Newsroom

Unless something drastic happens then yes, they will be. The term ‘classic’ is pretty fast and loose within the classic car world. After all, the first-generation Vauxhall (Opel, if you’re reading on the continent) Vectra and Rover 214 are now considered classic. This is strange because both of these cars were properly crap when they came out in the 1990s. Unlike wine, they have certainly not improved with age. Yet if we define a classic car as a ‘first’ of its kind, the ‘last’ of its kind, or a vehicle that changed its parent brand for the good, then both the ID.Buzz and ID.3 will certainly be considered electric classic cars of the future.

After reading this story, would you like to add a Volkswagen - electric or otherwise - to your car collection? Click here to browse our thousands of VW listings here.

If you are interested in making the switch to an EV or hybrid, then click these yellow words to take a look through what we have available.