Recently, countless classic car dealers, restorers and general old metal aficionados flocked to Essen for perhaps the biggest classic car show in the world. As you may have noticed, Dyler team didn’t miss out on this action either.

As expected, Techno Classica Essen truly delivered, featuring everything from multi-million classics, to badges, blinkers and other odd bits and bobs for classic motoring lifestyle. This being the most prestigious classic event of the year, local manufacturers couldn’t miss out on it. Volkswagen were extremely involved and filled a massive exhibition hall of Essen Messe with various jewels from the history of their brands ranging from Ducattis to Skodas.

Admittedly, not the full range of VAG cars was on display. With Stuttgart’s Retro Classics happening simultaneously, Porsche decided to put bring most of their greatest hits there. Suspiciously, there were no diesel cars enjoying the limelight. Neither a diesel-sipping Lupo 3L, nor a Le Mans conqueror Audi R10 TDI were brought to Essen. It’s not hard to see why, with Wolfsburg manufacturer in deep trouble for Dieselgate and recent animal testing allegations, it is a terrible time to boast the controversial technology.

But don’t think there was nothing to look at on their stand. Quite the opposite, show’s visitors could get up close and personal with a host of the greatest hits from VW Group, including some bonkers racecars and envelope-pushing experimental vehicles. Here’s a select few.

Exactly 8 decades ago, Auto Union, a predecessor of Audi, presented their last ever iteration of their mid-engined GP car and pitted it against the front-engined contender from Mercedes. This is 1938 we’re talking about and yet the Silver Arrows topped out at 340 km/h. Type D was enabled to do so with the help of a 3 liter twin supercharged V12. Just imagine going at that pace with no seatbelts, roll cage or a proper helmet in a car equipped with drum brakes. Well, one could hardly tell the pace as the dashboard has no speedometer. 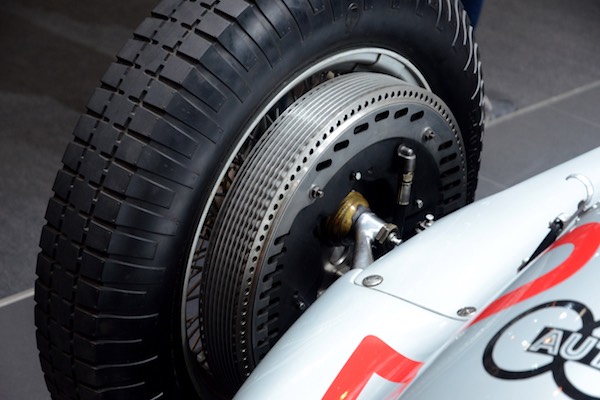 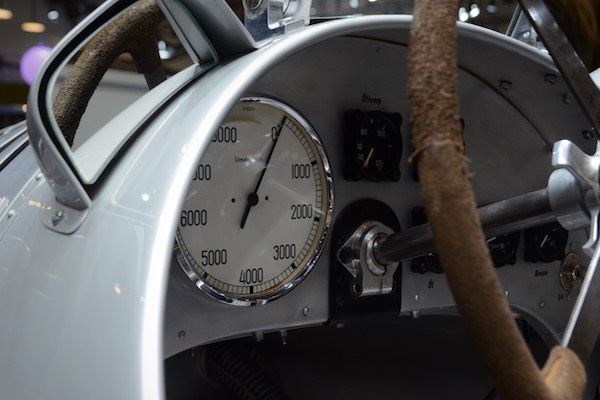 To emphasize the antiquity of the Type D even more, Audi placed it besides the Audi 200 Trans-Am. The 80s quattro racecar is half a century newer and it certainly shows. Not going to go too much into details on how as it’s already covered here.

Although the Type D example at Essen had no wear and tear acquired when racing, it oozed the grandeur of the bygone days of racing. Show’s visitors were well aware of it and gravitated towards this classic rocket. So much so, it was difficult getting a proper shot of the car. 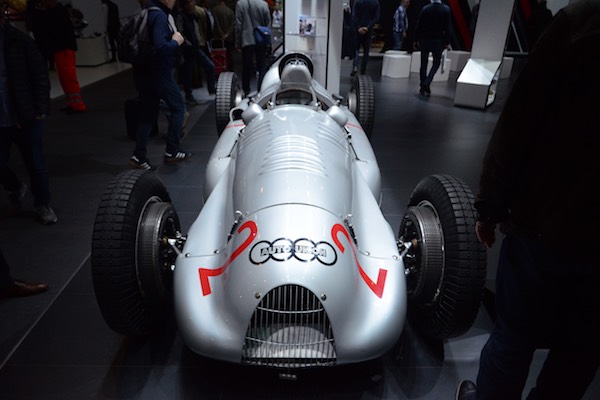 Despite being 80 years old, this mental racecar is still massively popular
©Domantas Mizeikis 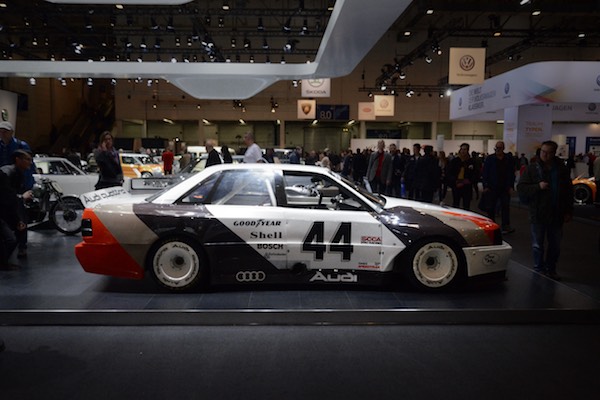 Sticking with mental racecars for a bit, we present you a 1987 twin-engined VW Golf that was made to conquer the grueling Pikes Peak course. Instead of taking a page from their Group B discovery book and employing the infamous quattro technology (or Syncro, as it was marketed in VWs), engineers decided to simply pack two motors inside the compact car. Two GTI 1.8 16V four-bangers were boosted with turbos and run in tandem to bring the Golf up the Pikes Peak’s 156 turns. The addition of forced induction was extremely handy when the air became thinner during ascent. 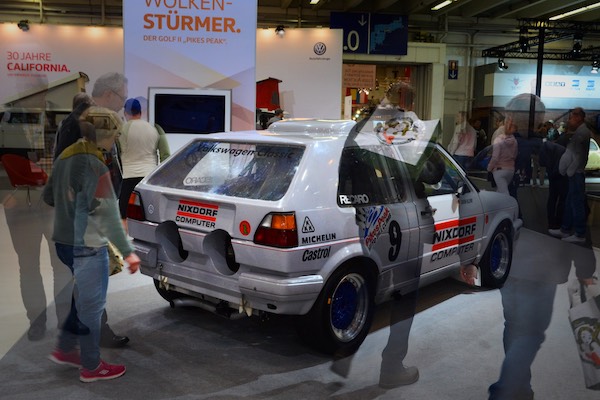 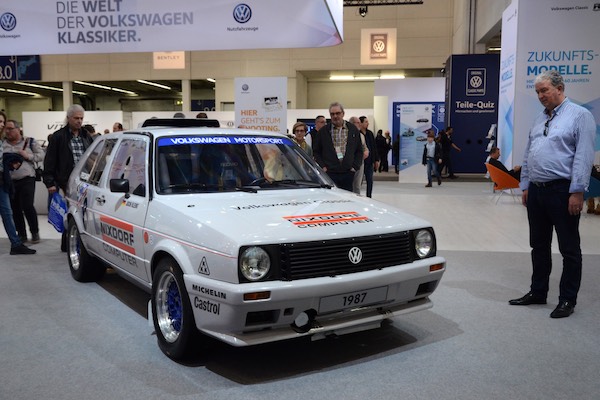 Grown men were mesmerized by the mighty machine
©Domantas Mizeikis

Despite being wildly ambitious, this twin engine Golf was never that successful. It never claimed victory, mostly due to technical mishaps. Considering the lack of victories, it may seem odd that VW even bothered to bring this Golf. Well, the Wolfsburgers did so because after a 34 year long hiatus they are coming back to Pikes Peak. This time round, they shall be harnessing electrical power and striving to have the fastest EV ever on that track. 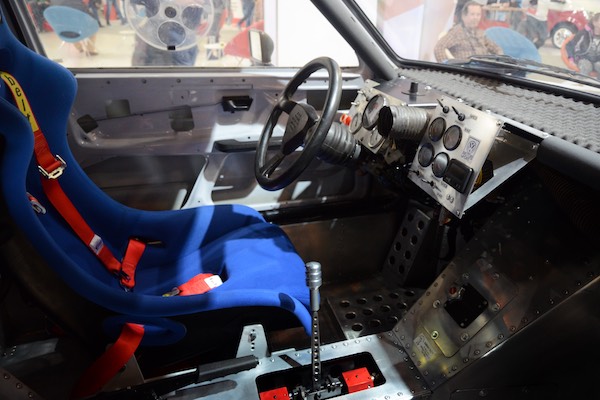 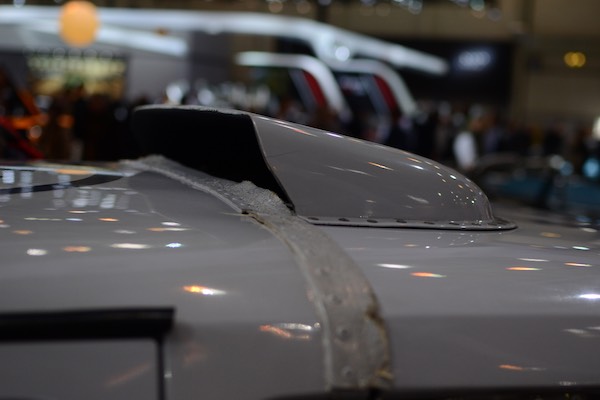 This racecar is unpolished and rough around the edges
©Domantas Mizeikis

This is a definitive future classic, just in a slightly different sense. VW Futura was a design exercise of 1989 to guess how the cars may look in the year 2000. Some of its design gimmicks never caught on, such as rear wheels that turn sideways to aid parking or these massive gullwing doors. And yet, a surprising amount of Futura’s features are considered normal in the segment these days. 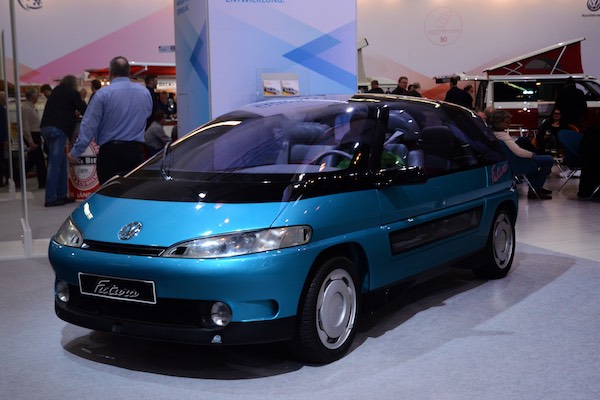 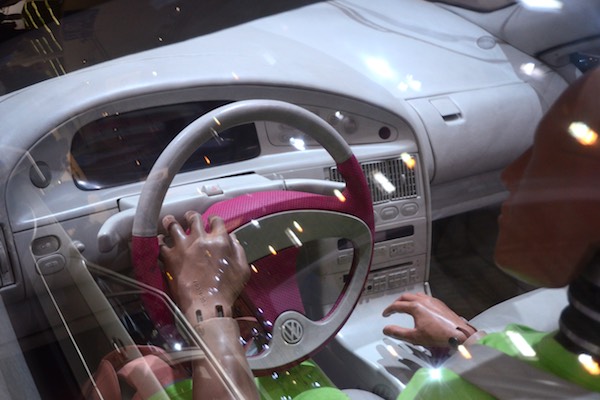 For starters, it is a powered by a 1.7 l supercharged powerplant, and forced induction is a common sight even in the smallest of cars due to the chase of a better economy. Futura’s Cd of 0.25 doesn’t hurt the economy either. But the most striking thing is the electronic equipment. Futura came with a host of gadgets that have made their way into the serial production. Electronic stability control, sat-nav, electronic parking brake and even a radar controlled adaptive cruise control were all there. In a car that comes from the time when everyone was jamming to Roxette’s “The Look”.

Cynics may say that it was just a lucky guess from VW, but it does make a powerful statement when some of the most prominent tech of today is showcased in car that is nearly 30 and shares styling cues with the Mk3 Golf. 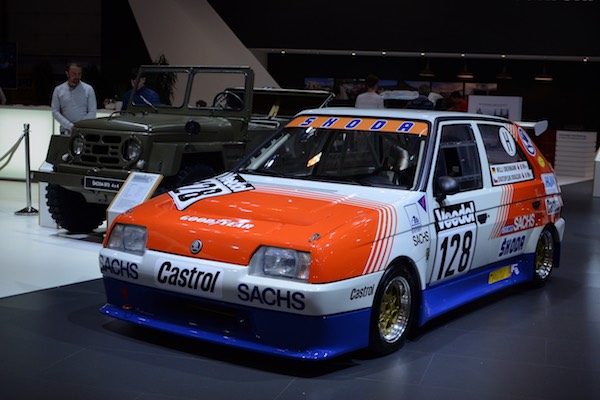 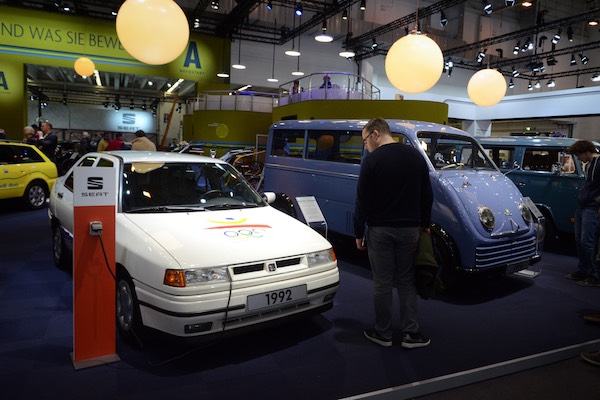 It seems that lots of thinking went into choosing which cars VW should bring to Essen. Despite being models of the past (as it is a classic car show), they indicate how the brands of VW Group want to be perceived in the future.