The most prominent vintage watches for drivers

There are millions of watches that are sold world-wide, to please the choosiest clients. However, readers of Dyler.com will probably find the watches specially created for drivers the most interesting.

Historically, there have been a number of watches created that have certain links with automobiles and driving. Naturally, many motorsport fans can promptly describe the peculiarities of such brand names as Heuer Carrera or Rolex Daytona. Nevertheless, their history, brand awareness and enduring value are very different. Let's review the TOP 5 watches that are the most associated with automobiles and car racing.

It can be argued that the Carrera is the best known wristwatch, as well as being the best embodiment of the Swiss company Heuer. The Heuer Carrera's name was borrowed from the Spanish word for a race. The former head of the company, Jack Heuer, got the idea for this name during the dangerous Carrera Panamericana race, which took place in Mexico in the 1950s. According to Jack Heuer "Just the sound of the name itself was elegant, dynamic, could be easily pronounced in all languages and was charged with emotion." Hence, it seemed to have been connected with motorsports from the very beginning. 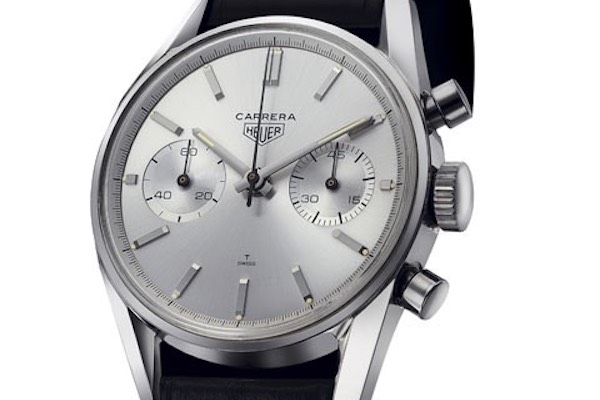 The first generation model was produced in 1963 and continued through 1969. It marked a significant breakthrough for the company, and the production of chronographs then become the central focus. The first Carreras watches stood out with their design that is today referred to as a classic. The dashboards of racing cars, with their key feature of clarity, became an inspiration for the original watch. Therefore, the dial was free of unnecessary details, making it instantly comprehensible. A tachometer had to be included on the case body to fit into the race driver's category.

The foundation of probably the most genuine relationship between Carrera and the motorsport industry took place in 1971, when Heuer became friends with Ferrari and its Formula 1 team. At that time, every team driver was given an exclusive Carrera watch with his name and blood type engraved on the case cover. A great number of different Carrera watches were introduced over the years, and all of them have maintained an iconic status. The present prices vary a lot - one can purchase a Carrera for 1500 dollars; however; the most unique models are valued at tens of thousands of dollars.

The Rolex Daytona was designed in 1963 to match the needs of professional race drivers. The name alone is invaluable, due to its connection with the famous race track in the US. A classic design, black face and bezel, and screw down pushers (a new invention at that time) were used for better hermetic features and provided extra waterproofing. Initially, the watch had a tachometer for the drivers to calculate their average speed (the current models are capable of calculating driving speeds of as much as 400 kilometres per hour).

In over fifty years, a range of different Rolex Daytona versions have been introduced for different occasions, but the model has maintained its exclusive status and classic design, and has consequently became an iconic watch created exclusively for drivers.

The actor and race car driver Paul Newman contributed a lot to the brand awareness of the Rolex Daytona model. He wore one of these watches on a daily basis from 1972 until his death in 2008. The present prices start at approximately 10 000 dollars, and end with exemplary models that are priced at far above 100,000 dollars.

This watch was introduced in 1976, as a present from the company's owner Jack Heuer to the Ferrari team which had won the Formula 1 season. Even though Jack Heuer had been cooperating with this team since 1971, the watch makers wanted to create an exclusive watch design to mark the first title of Niki Lauda. Despite the fact that it was an ambitious project, the Monza was produced as an economic model and this is reflected in its case body, dial and other parts. The shape of the case body was "borrowed" from the second generation the Heuer Carrera. However, this watch was more vulnerable to damage as brass, instead of stainless steel, was chosen for the case body. Nevertheless, it was one of the few Heuer watches to have the brand name engraved on the case cover. 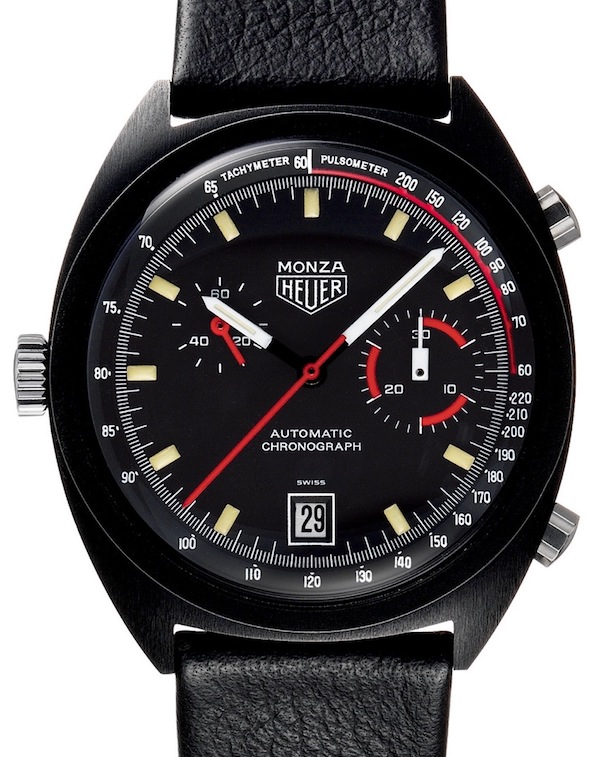 It had several other distinctive features including a heart rate monitor and a tachometer. And the buyers must have liked the fact that the Monza watches were sold in a helmet-shaped case. At the moment, this branded packaging is hard to find, and the price for the watch starts at 4000 dollars.

The original watch was sold until the beginning of the 1980s. Later, Monza's name was brought to life again several times, and is currently used for the modern TAG Heuer watches.

The Omega Seamaster Driver was created in 1969, and was completely different from other Omega watches, which is why it is the most recognizable and sought after by collectors. There is no doubt that it is a real driver's watch. It is exceptional due to its colourful dial and asymmetric design - the three push controls were placed on top of the stainless steel case body like in a chronometer, making it easy to regulate them even with driver's gloves on. It was precisely these push controls, which resembled a bull's horns, that gave the watch the nickname of "Bullhead" and it became better known by this name than the original. 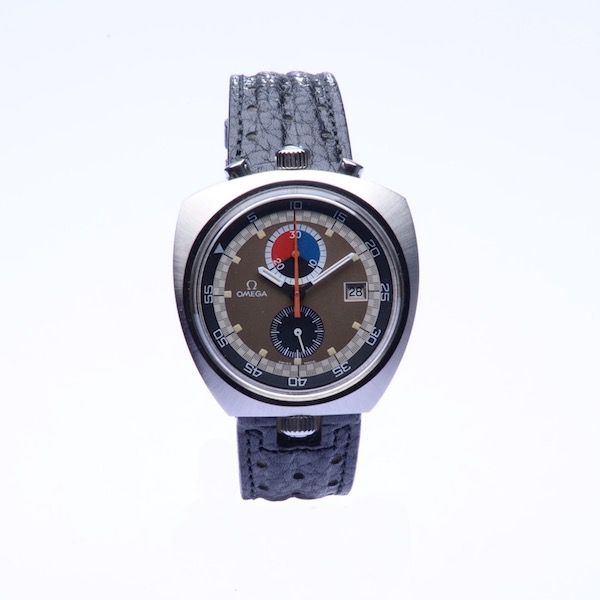 It was also unique since its case body is way thinner on the top than on the bottom; therefore its surface is higher in the 12 hour zone when compared to that of the 6 hour. Sadly, very few buyers appreciated its distinctive features and the production of the watch stopped after one year because of the poor sales.

At that period, a number of other companies such as Seiko, Citizen, Bulova, Breitling began offering Bullhead style watches, but the current price trend indicates that the Omega is one of the most sought after. Now it is appreciated as a valuable collectable. 5 years ago, the starting price was around 5000 dollars; today, however, it starts at 9000 dollars.

When we speak about watches created for drivers, it is simply impossible not to mention the Heuer Monaco, even though its initial vision was far from being directed at car fans. However, it is a legendary watch with a very interesting history. The watch owes its global fame to Steve McQueen, who wore it during the filming of Le Mans, in 1971. Apparently, this was a coincidence rather than a marketing trick. Initially, Steve McQueen wore an Omega watch on the filming site, but soon after he rejected it and chose the Monaco instead. It is said that he had never heard of the Heuer company before. 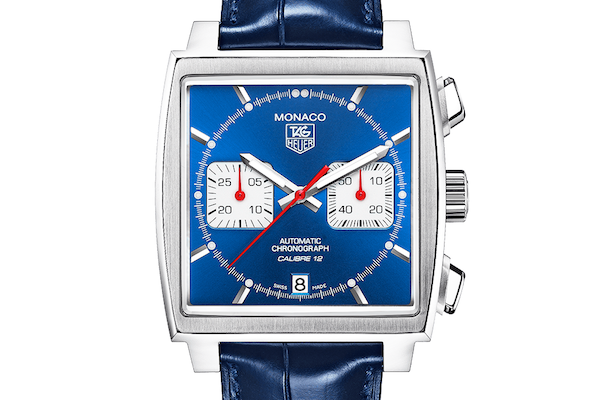 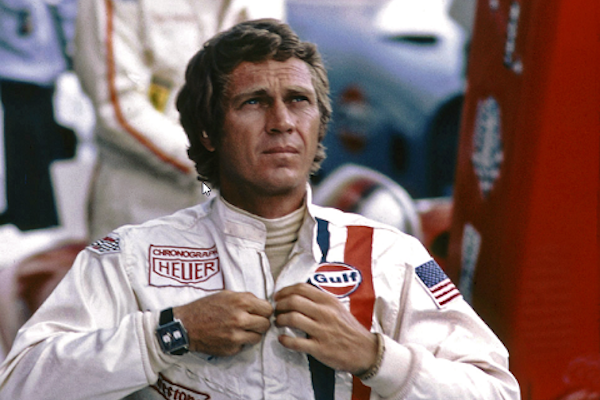 Jo Siffer, a famous Formula 1 racing driver of that period and the first sportsman-official ambassador of Heuer, also appeared in Le Mans. This famous driver sported the Heuer Autavia watch that was exclusively dedicated to racing drivers. Naturally, Steve McQueen, could not wear the same watch, so he was given the Monaco, even though it was not created as a driver's watch. The producers of the film had three identical copies of this watch: one for the filming, one for the shooting and a third that was kept safe in case one of the other watches would break. As this was the only watch to come in three copies, this fact became a crucial factor in making this decision.

Despite the fact that the Monaco was not created as a driver's watch, it was a truly exceptional design. At that time, the angled shape of the case body was far from being popular; yet Heuer decided to take a risk and continue producing this avant-garde style watch. It surpassed the usual standards, the dial was flat, and the materials used in the production were distinctive of their quality – so the watch was sure to pass the test of time. The watch now costs from 10,000 dollars to buy, and well-preserved models can be evaluated at 15,000 dollars. The prices have been increasing over the past year, so it seems like a good investment item.