The Three Most Notorious Pininfarina Designs

Pininfarina is one of the most well-known car design companies in the world, and one of the oldest as well. In the 87 years since it was founded in 1930, the company has developed a wealth of car, train, tram, yacht and even private jet designs. However, its most renowned designs are mounted on four wheels. Among the company's clients were names such as Volvo, Peugeot, Maserati, Alfa Romeo and, of course, Ferrari. And of all these, there definitely had to be three of the 'mostest' that could be considered the most exemplary works produced by the designers at Pininfarina. And that's what we're going to discuss now.

The first of them is the Alfa Romeo 164 – a solid sedan with angular lines that became the last model to be developed by Alfa Romeo as an independent company, before it was acquired by Fiat. In charge of design development for the car was Pininfarina's Enrico Fumia, who was behind other well-known models such as the Lancia Y and the Ferrari F90 as well.

Characteristic of the 1980s, the angular lines of the car's design emerged quite early. The first 1:1 scale models were created in 1982, well before the model was introduced to the market. However, the company needed to check if potential buyers would welcome a car with such unusual lines for an Alfa. And there is no better way to do that than with a concept car introduced at an ordinary motor show. 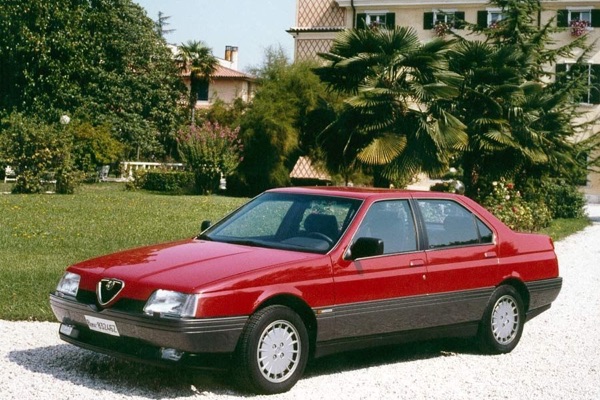 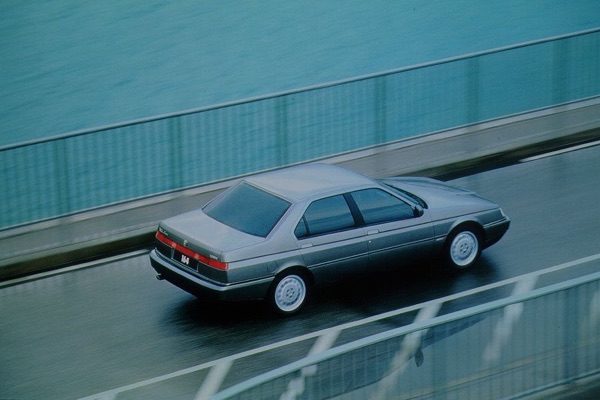 Alfa exhibited the prototype created by Pininfarina – which was something of a link between the design motifs of the company's past and the future that the 164 was supposed to represent – at the 1986 Turin Motorshow. The coupé prototype was called the Vivace and was received very warmly by the public. For Pininfarina, this was a sign that design work on the 164 should be continued. Of note is that it was not created by Enrico Fumia's pencil alone. In the late 1980s, Alfa Romeo took a step into the future and, for the first time in its history, used computers to develop the chassis for the 164. 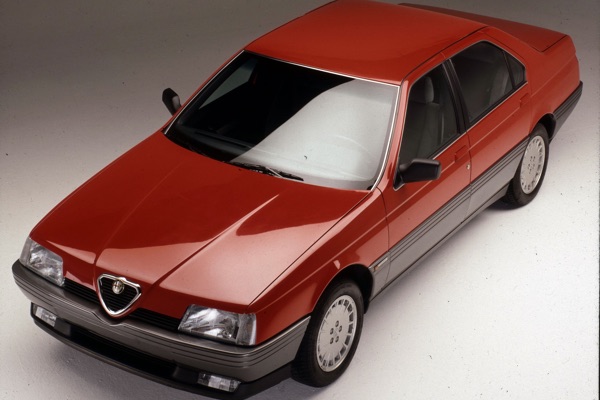 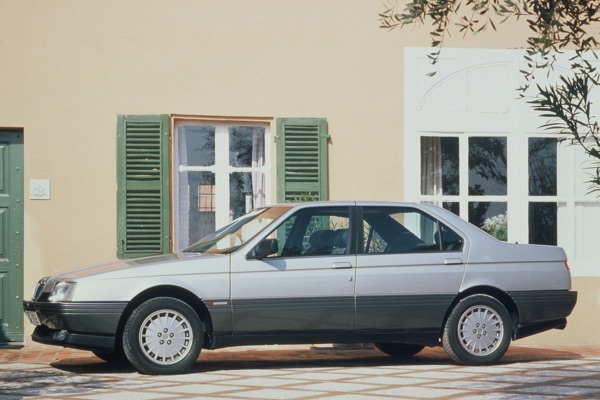 Another point goes to Pininfarina for the indisputably unique design of the Alfa Romeo 164. What's the big deal, you might think – after all, Italian cars are all unique. However, this thought could only come to mind if you are not familiar with the context of model development. When design work for the Alfa Romeo 164 began, the company was desperately short on funds, so they had to look for someone who would agree to join in on the development of a new platform. Alfa Romeo had to violate their principles and sign a cooperation agreement with an old foe – Lancia. The pair was joined by Saab and Fiat. The Saab 9000, Fiat Croma and Lancia Thema – if you look closely, the entire threesome has something in common. And that's not surprising because, for example, some important parts that give a car its shape like the side doors were the same for all three. Only the 164 managed to avoid levelling. Even though it did share a platform with the aforementioned trio, Pininfarina's design was unique and unmistakable. The solid shapes of the 164 are valued among collectors to this day, and you can identify a small part of the idea for the 164 that Pininfarina created in every Alfa that came after it! 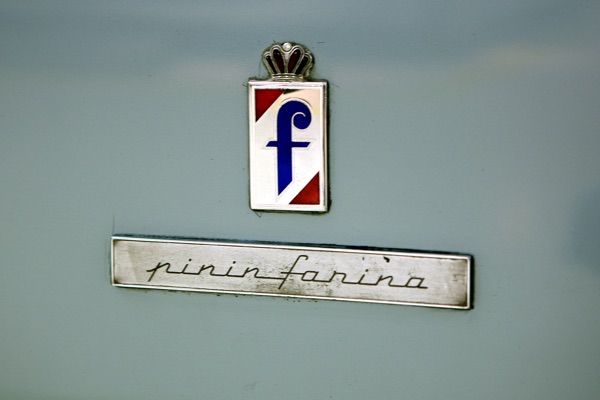 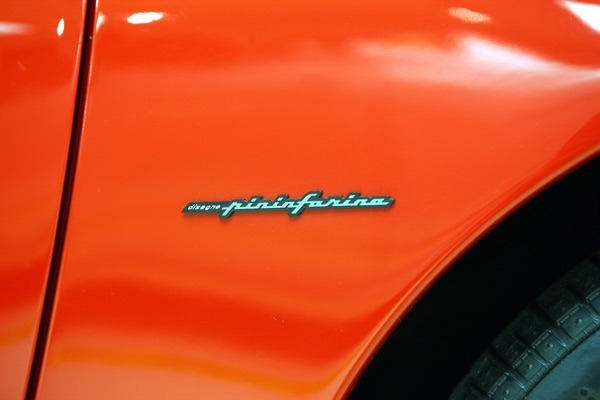 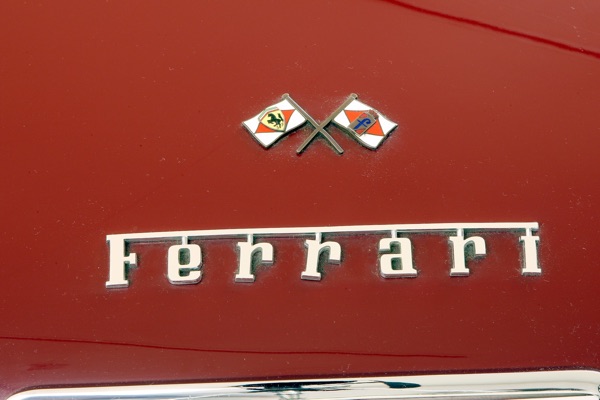 Another one of Pininfarina's three most impressive models is the Ferrari 365 GTB/4 Daytona which, even almost 50 years after its release, is still recognized – along with names like the Lamborghini Miura – as one of the most influential models in the evolution of sports cars. Why did it make it to this triad? Have you ever had the pleasure of admiring the sharp-edged styling of the Enzo or the F40 that heated up your imagination in a poster on a wall? This is precisely the reason why the Ferrari Daytona made it to this triad. Before the Daytona, Ferraris traditionally featured rounded, automotive-baroque design. Without a doubt, these are also good looking cars that catch your eye when you see them at a show or in a museum, but they lacked aggressiveness. 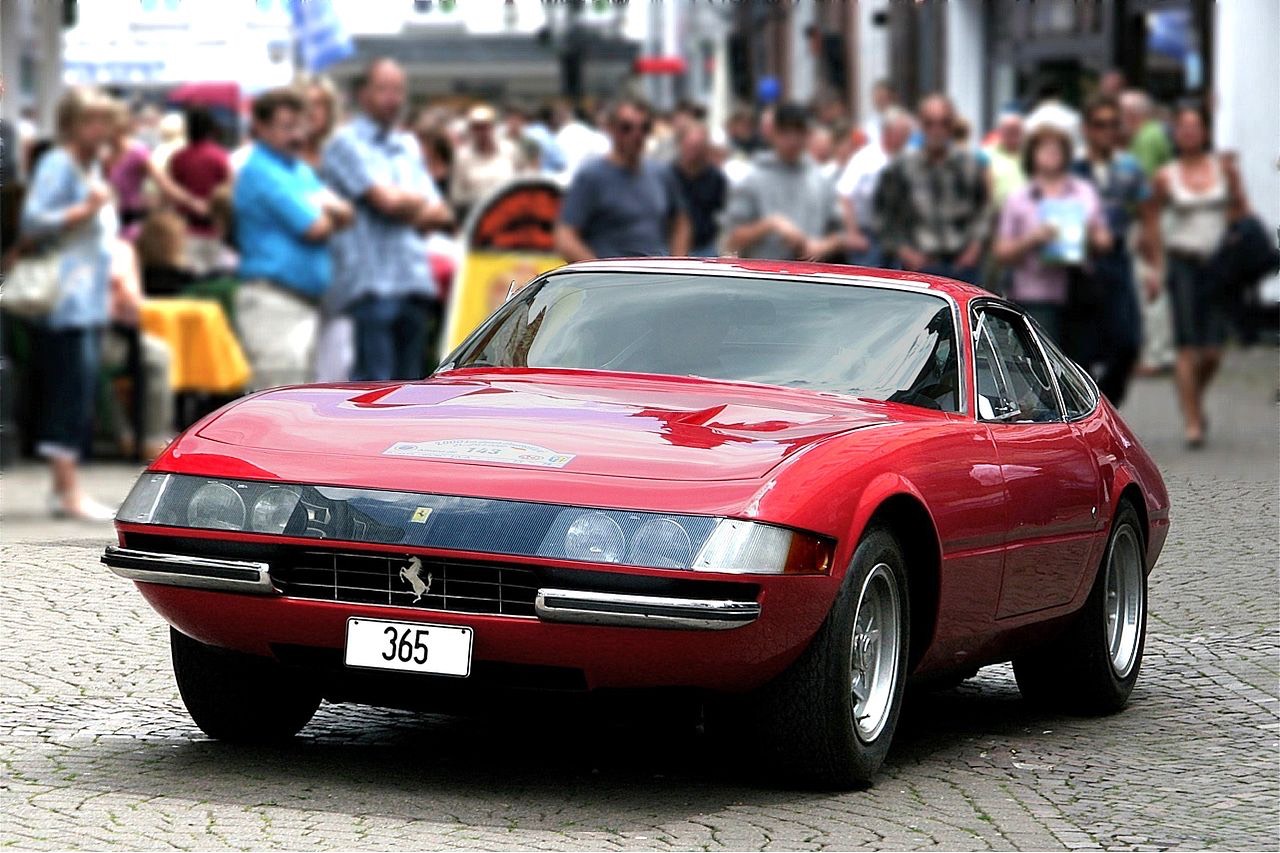 And then everything got turned upside down in 1968 when Ferrari introduced the new 365 GTB/4 Daytona. With its angular, broken lines, the car gave Ferrari aggressiveness and made the brand's design concept much sportier than in the previously produced models. The body lines for the Daytona were drawn by Pininfarina designer Leonardo Fioravanti. This was not the first Ferrari he created (one of Fioravanti's achievements prior to the Daytona was the sporty little Ferrari Dino), but it was the first example of his new Ferrari design idea. 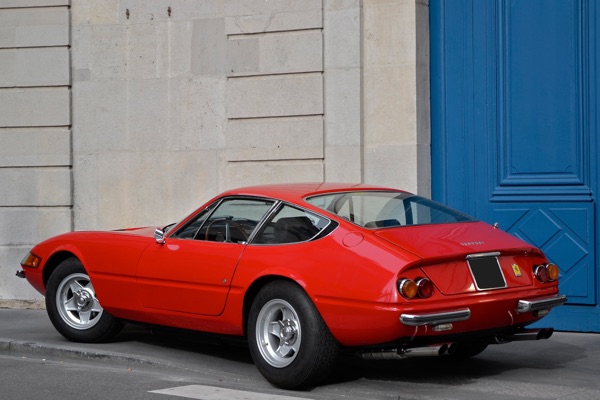 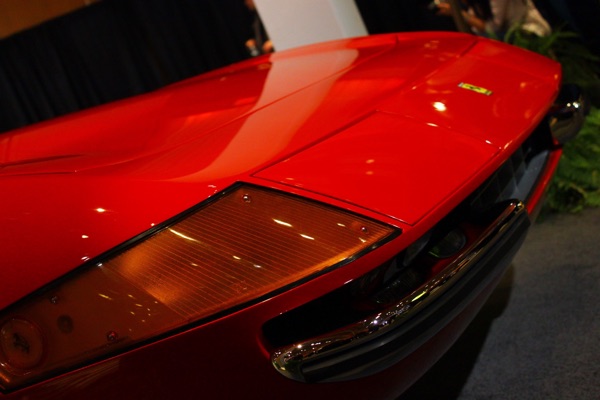 The history of the Daytona's design began in 1966. Fioravanti saw the chassis for the future model at the Ferrari factory. “It struck me as something unique,” he remembered. “I wanted to follow its shape and dimensions while paying close attention to the aerodynamics.” As soon as he finished the design drafts for the Daytona, Fioravanti showed them to Sergio Pininfarina himself. The latter came away impressed by the future car. As Sergio recalled, “The fundamental objective we set for ourselves was to obtain a thin, svelte car, like a mid-engine design. The whole idea was really a search for this sense of lightness and rake, a slender look.” And you can't say that the company didn't succeed. Even with its traditional configuration, the Daytona looks just as sporty as the Lambo Miura that was already mentioned. Future Ferrari models have maintained the ideas conveyed in the Daytona which make Ferraris recognisable around the world, even among people who are not interested in cars.

Meanwhile, picking out the best design of all time and all brands was – at least in our subjective opinion – no problem at all. This is a car that is just as much the 1980s as mirrored sunglasses and that has a shape that everyone knows. Without exception. The Ferrari Testarossa is perhaps the most beautiful Ferrari ever made, and undoubtedly one of the best design examples of any car ever made. 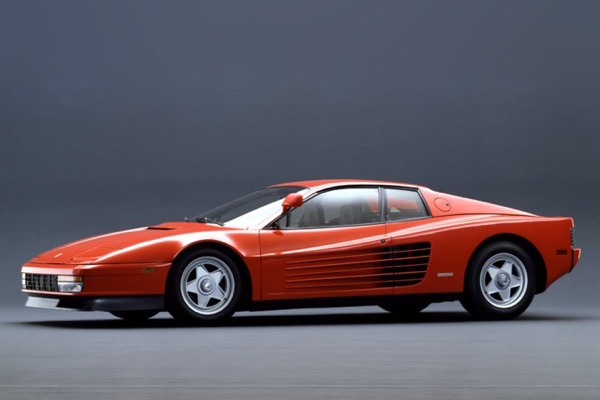 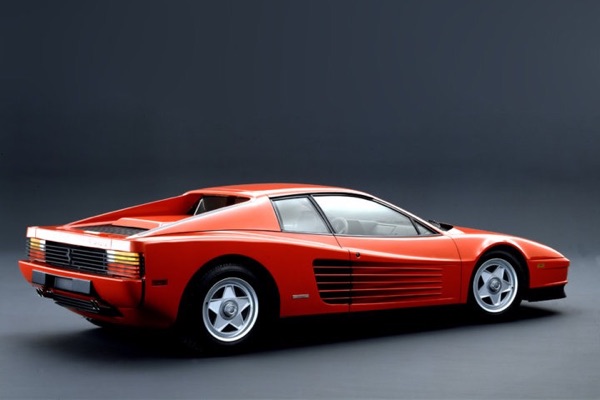 The aggressive, angled lines, the black band in place of the four round rear lamps that were the norm for Italian sports cars up until then, and the side strakes that covered the intakes mounted in the rear became the trademark of the Testarossa's design, and the reason why all other sports cars from that time looked pallid and boring standing next to it. The car was premiered at the 1984 Paris Auto Show. The public immediately deemed it the best looking car of the show. The following year, Pininfarina's efforts were recognized at the Los Angeles Auto Show with the Car Design Award 1985 conferred by the show organizers. Another distinctive feature of the Testarossa's design is that the rear part of the car is wider than the front. This was only for the benefit of a sports car because the design makes it more stable on the road. 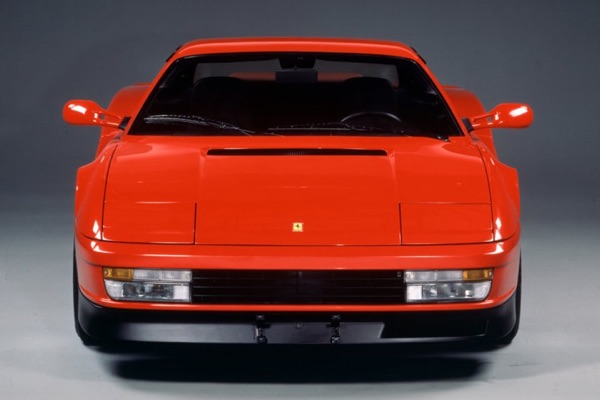 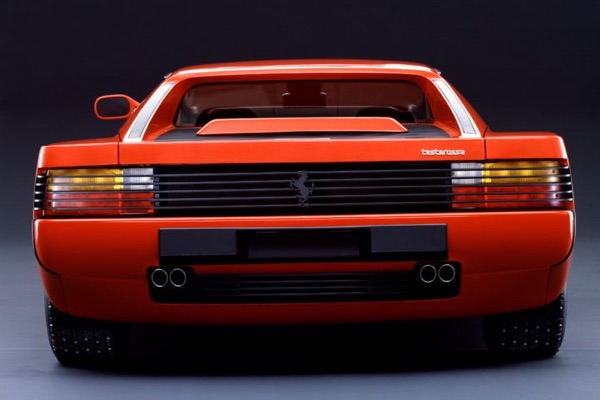 In fact, Pininfarina's design was so awesome that it was even against the law. The very first Testarossas that came out only had one mirror. On the driver's side, as was customary for old sports cars. However, this was completely out of line with the reality of the congested roads of the late 1980s, especially in the US, which was the Testarossa's main market. In 1987 the passenger side was given an analogous rear view mirror which, incidentally, had completely no impact on the Testarossa's timeless design. 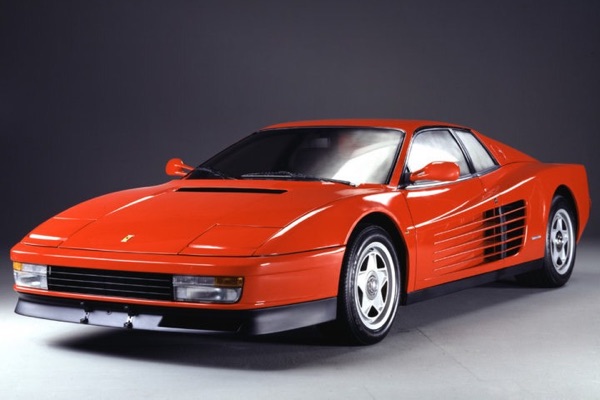 Now take a guess – who was responsible for designing the most famous sports car in the world? The group of Pininfarina designers who developed the Testarossa was headed by the very same Leonardo Fioravanti. Clearly, da Vinci was not Italy's only talented Leonardo. Even 33 years after the Testarossa's debut, its appearance is not at all outdated. Without a doubt, this is the merit of both the designer and the Pininfarina studio. There is a reason why the Testarossa is given so much attention on the Pininfarina website – if it wasn't for this car, Pininfarina would definitely be a bit less eminent in automotive history.