The AMC Pacer – a Disco Ball of Strange Proportions

The American automotive industry was not exactly going through the best of times in the early 1970s. Detroit's old glory days, when big new cars with plenty of chrome and giant tailfins were being released every year, were long a thing of the past. Americans were buying more and more small-engine Japanese cars, and also loved the new thing from Europe – the Golf that replaced the Beetle. Right after the fuel crisis ended, the States became obsessed with saving money, and everyone wanted cars with the most economical engines possible.

The American Motor Company – also known as AMC – was the first to realise that future profits were in small cars. They began developing the first small American car back in 1971. The company's principal designer, Richard A. Teague, sketched a few dozen prototypes for the future car. Various mechanical layouts were tossed around. Some of the prototypes had a mid-engine configuration while others were front-wheel-drive, and there were also other different options that American eyes and wallets were not accustomed to.

After some short creative discussions, the shape of the car was selected rather early on. It was decided that it wouldn't be long, but it would be wide and would have a lot of glass. The AMC designers wanted to fit the manoeuvrability of a small car and the comfort of a big car into one vehicle. Considerable attention was given to the car's interior. The Pacer was designed first and foremost for the comfort of the people sitting inside, with the body and exterior lines added on later. For example, the passenger door was slightly wider than the driver's. This was done so that it would be easier for passengers to get into the rear seats of this disco ball. Car and Driver magazine noted that it was the first American car designed from the inside out – building the body around the ergonomics of the cabin and the comfort of the driver. 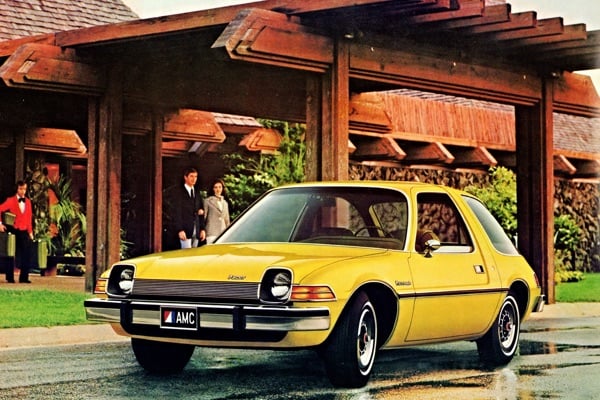 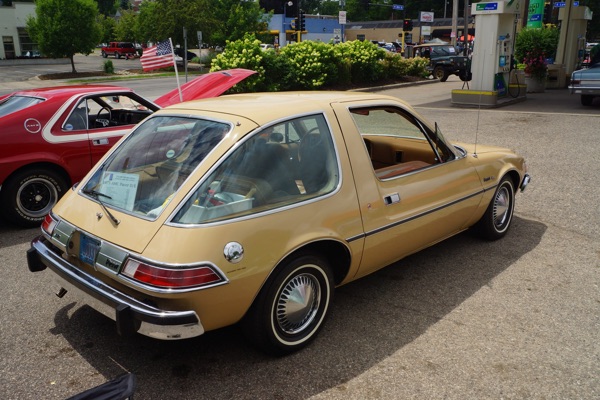 And the first American car designed from the inside out began rolling off the conveyor belt in 1975. The public... well, people weren't queuing for it, but the little car was very interesting. The body surface was 37 per cent glass, which is why the Pacer was quickly dubbed the "Fishbowl on Wheels", and in summer its drivers were melting faster than the Nazis chasing Indiana Jones after Pandora's box was opened. Yet even more interesting than the car itself was its advertising campaign. AMC advertised the little bubble as “the first wide small car" in the world.

Which immediately poses the question – why bother creating a small-engine car if it's still a typical wide-bodied American? Cuz it‘s the USA, baby! The standard United States citizen (who, incidentally, was still slim enough at that time) wanted something that was very broadly American, but small at the same time. And how else are you going to do that if not with the Pacer's body lines? Very roughly, the Pacer was about 4.5 metres long and 2 metres wide. Here's a fun fact – the Cadillac Eldorado that was being produced at that time was almost the same width. Indeed, these were probably the most unusual proportions in the history of mass-produced cars. The standard bubble was considered the sedan version, and the station wagon came out in 1977. This differed from the first model with its less-sloping rear doors and tail lights... well, and that's about it. 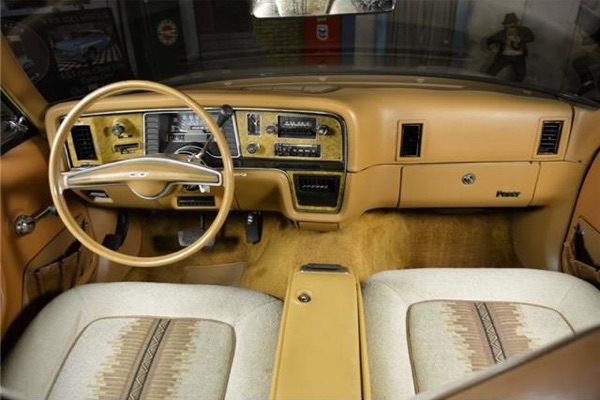 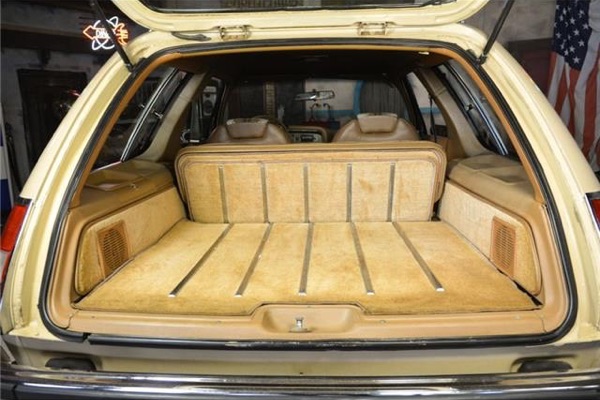 However, automotive journalists were generous with their praise for the new AMC. The Motor claimed that the "more you study both the general layout and the detail features of the Pacer, the more convinced you become that the men who dreamed it up and decided to make it actually do drive around in crowded cities and consequently realise from their own experience that the traditional big barges are less and less easy to navigate through our streets." Car and Driver added that it was "eminently stable and controllable, with its rack-and-pinion steering and wide track." Motor Trend magazine went all out and called the Pacer the most creative car in the past 15 years.

It turned out that the public liked the first compact car in Detroit's history, and it enjoyed fairly decent sales. In the first year it was on the market – 1975 – AMC sold nearly 150,000 cars. The unique design helped, but so did the fact that it didn't have any competition in the Detroit natural area. Meanwhile, the Golf and the Toyota weren't wide enough for the whole family to fit in comfortably. 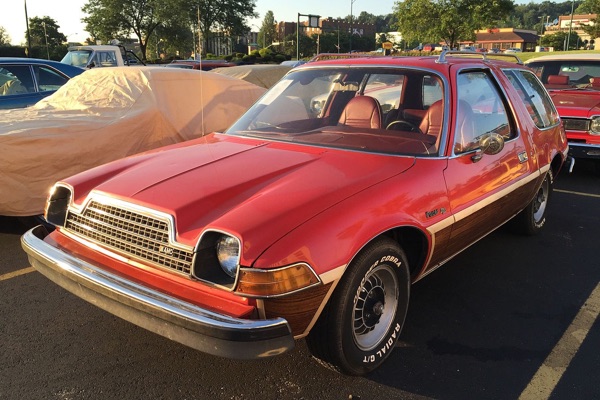 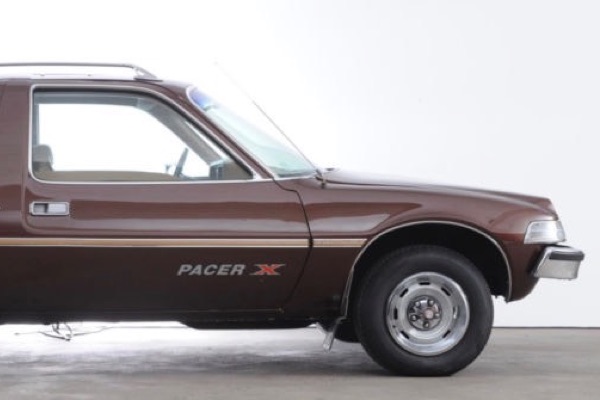 However, after two successful years, Pacer sales suddenly plummeted. The Big Three responded to the situation quickly and began introducing their own rivals; meanwhile, the American public ended up deciding that the Golf wasn't so bad and started buying them instead of the bubble on wheels that had just recently sold so well. And perhaps the most ironic reason was that the Pacer's signature large glass areas increased the car's weight significantly, which meant that it used a lot more fuel than its competitors from Europe and Japan.

When fuel prices went up again in the late 1970s, reminding consumers of the empty petrol stations not so long ago, it was a fatal blow to sales. The Pacer ended its life at about the same time as the disco era – on 3 December 1979, after 280,000 units had been produced. The fact that AMC began offering more and more configurations for the model likely contributed to its dropping sales. Buyers probably weren't pleased that a car that was initially devised to be affordable was quickly catching up with much larger Detroit competitors in terms of price.

However, the car was more than just ergonomics and glass. After all, something had to drive it forward, and it had to handle on the road. Now try to imagine a compact European or Japanese car. What's the most cubic capacity you'd give its engine? 1.8 or 2 litres, tops? Then you wouldn't like the Pacer. It was only compact in terms of length – not engine. The very smallest option available was a 3.8-litre, 6-cylinder engine. And what kind of American would it be without a V8? A 5-litre engine delivering power to the rear wheels through a 3-speed manual or automatic gearbox. "Compact" my foot. 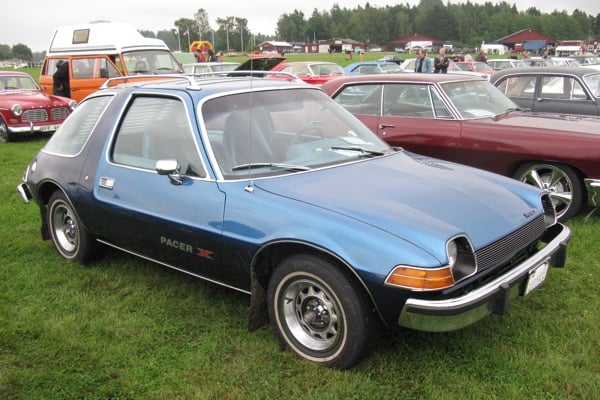 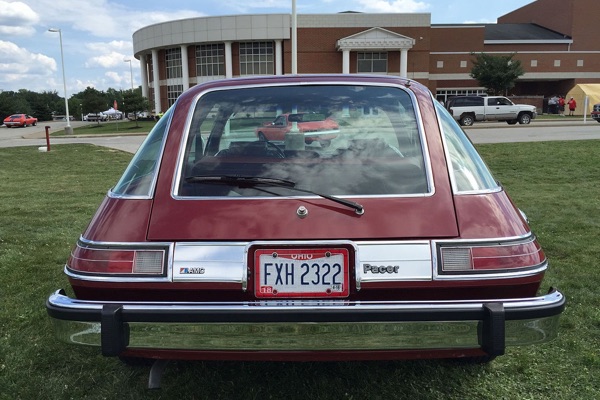 Here's another fun fact – during the design phase, there were plans to fit the car with a rotary engine, which was then considered the motor of the future. AMC even purchased a production license from NSU, which had already launched the futuristic Ro 80, but they had problems incorporating the engine in the process and were forced to fit the most compact American car out there with engines that weren't compact at all.

The Pacer wasn't very fast on the road, but could still reach a maximum speed of 150 km/h and hit 100 in about 16 seconds. However, its lack of speed was compensated for by its very un-American handling. The Pacer responds to each touch of the steering wheel with amazing precision and sticks well to turns – it's as if the car is driving on rails rather than on the road. A very unusual feature for an American car from the 1970s. 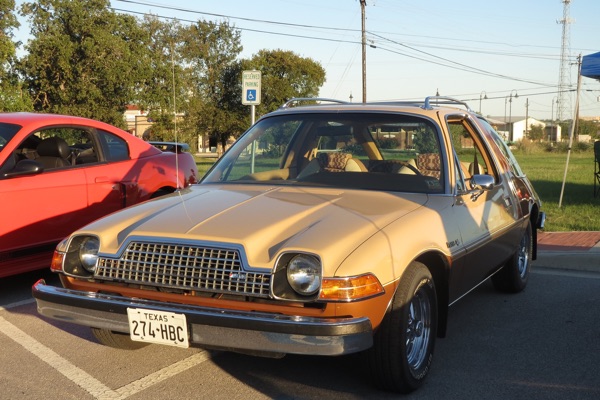 If you're fascinated by what you just read and are a stereotypical geek from an American high school movie, then the Pacer is waiting for you to open your wallet. Their prices depend on their condition. You can get a clunker for about a grand, or you can spend 10,000 dollars or more for one that is "better than new". Just don't think that it's not worth it. Even though it is constantly named as probably the worst American car ever made, this little bubble of a vehicle is still very charismatic and holds a respectable place in the history of the American auto industry, so why not give in to temptation and dive back into the disco era, melting from the heat radiating through the glass that covers half of the body.