If You've Ever Thought About a Car the Way You Would About a Woman, You Should See the Movie Christine

Most likely, many of you have thought about your car the way you would about a real woman – one that rewards you for your love and care by giving you a reliable ride, but also becomes crazy jealous when you look at real girls. And it expresses its jealousy by breaking down or refusing to start in the middle of town when a potential competitor is riding shotgun, or when you're on your way to see a pretty blonde. These were probably some of the thoughts that Steven King had when he sat down in 1982 to write one of his best-known horror novels: Christine.

And Columbia Pictures acquired the screenplay rights without even waiting for him to finish writing it. In the late '70s and early '80s, the big trend in Hollywood was to make horror movies where something other than a psycho with a bloody knife scared everyone out of their seats. In 1975, Spielberg's Jaws shot the young director into Hollywood stardom, and in 1977 The Car was released – a horror/thriller where a pimped-out Lincoln Continental terrorizes the inhabitants of a small town. And thus, Mother Nature very logically put the idea in the heads of the executives at Columbia Pictures that with King's Christine, they were sure to pull in one or two million. The movie wasn't as big of a blockbuster as Jaws, but it still made about 10 million for the studio. That's a decent amount, especially with inflation in mind. And now we'll talk about the thing that made those 10 million.

The plot is pretty simple. Arnie, a dejected teenager who hardly has any friends (there's always that kid at school who was born a loser and who everyone takes things out on – this is how Arnie is presented in the book), buys a complete clunker – a 20-year-old Plymouth Fury (both the movie and the book take place in 1978). Anyone would agree (except for Arnie) that the only thing the car is good for is the junkyard. Arnie begins restoring the car and works on it until it becomes "better than new". But it's not just the Plymouth that's changing – Arnie is too. He goes from being a quiet nerd to an arrogant being who is ready to do anything for his beloved Christine. It's because of Christine that Arnie gets into a fight with his best – and only – friend Dennis, and breaks up with his girlfriend Leigh, the school beauty.  I already mentioned that they are crazy jealous of other girls... Getting back to the plot, it's not only Arnie and Christine that change – the town where it all takes place does as well. It turns out that Christine isn't just some relic from America of the '50s with its white picket fences – she is also a free-thinking and -acting creature that kills everyone who gets in her and Arnie's way. 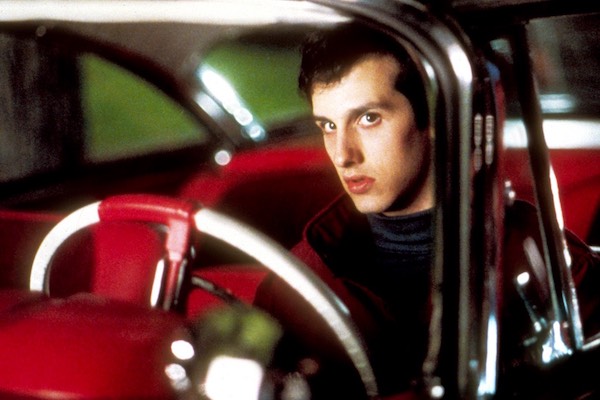 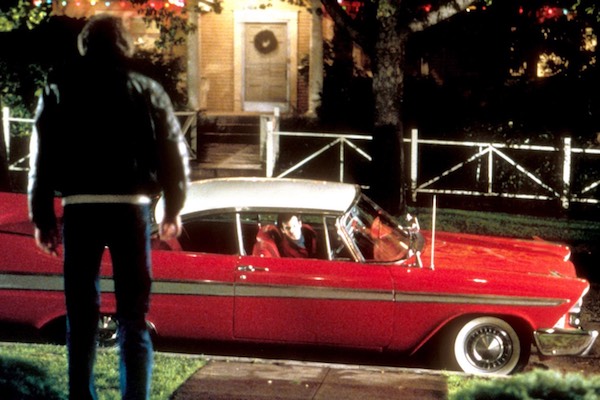 However, the plot digresses quite a bit from the events in the book, and is even called an interpretation of King's novel. For example, in the movie, Christine is portrayed as being possessed by an evil spirit right from the introduction, in a pretty bad-ass scene at a Detroit assembly plant in 1957, with "Bad to the Bone" playing in the background. Meanwhile, in the book, Christine goes shopping at the murder supermarket at night driven by the ghost of the previous owner, Roland D. LeBay. The latter, who is a detestable old man wearing an old-fashioned back brace, was also cut out of the movie. His words – "She had the smell of a brand new car, and that's just about the finest smell in the world, except maybe for pussy" – are still heard in the movie when Arnie buys Christine, but they come from his brother's character, since Roland had died a few weeks before. Another difference is that movie quietly cuts out the storyline in the book where Arnie smuggles cigarettes and drugs through several states for Will Darnell, the owner of the junkyard, in return for letting Arnie pamper Christine in his garage. And that's just a few examples of how the book "got lipo" to turn it into a screenplay. 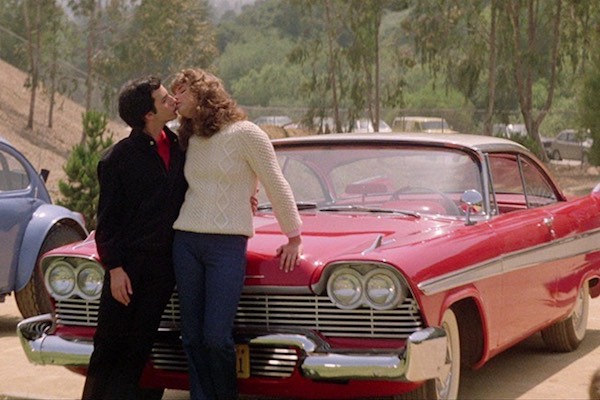 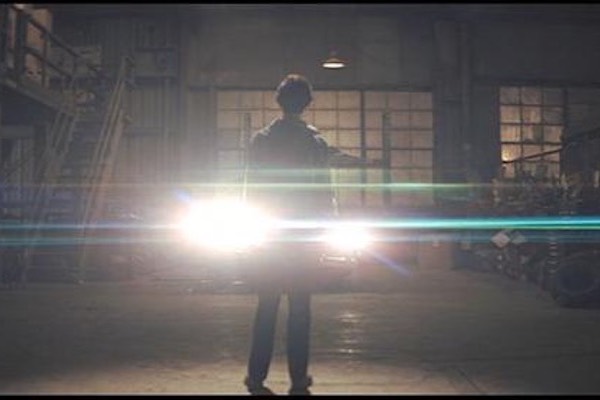 The question of whether this was beneficial or harmful to the film remains open. On the one hand, you'll have a tough time cramming a 500+ page plotline into a movie reel, even if you're the best scriptwriter around, so the book inevitably had to be shortened. On the other hand, some of the episodes in the book would have been valuable in creating the atmosphere in the movie, making the scriptwriters' interpretations that appeared on the screen difficult to understand.

Another thing that you'll notice immediately is that the movie doesn't feature a single actor who was a star at the time, or even known. Kevin Bacon was considered for the role of Arnie, but he opted out for another movie that was being made at the same time, and there was the talk of casting Brooke Shields as Leigh due to her popularity after her role in The Blue Lagoon (1980). However, she was turned down, based on the argument that unknown actors would help to create a more realistic atmosphere. And this was the same kind of two-sided solution as castrating the book to adapt it to the script. On one hand, it must seem like you're watching a B movie. On the other, the actors that were selected – though not stars – do in fact do a top-notch job. Especially Keith Gordon in the role of Arnie, who does a convincing portrayal of his transformation from a quiet geek into an insolent teen who thinks that the only thing that exists in the world is his Christine. 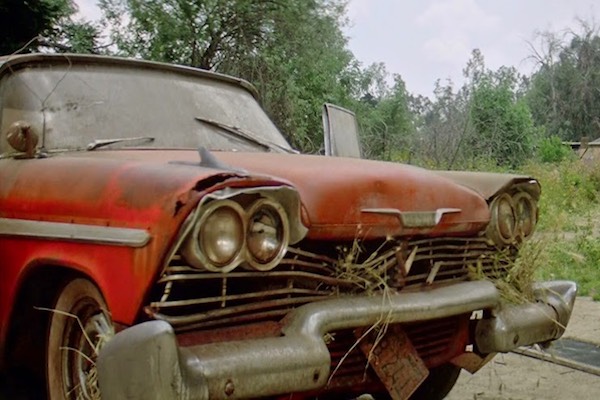 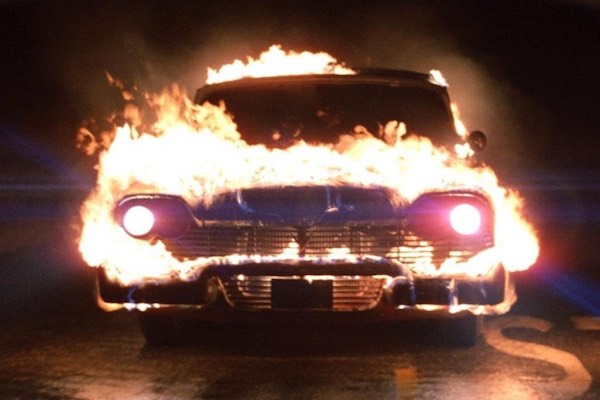 Even Christine herself – a 1957 Plymouth Fury – was never a Detroit superstar like the Eldorado or the Bel Air. The Fury was a simple mid-range car for the ordinary American slaving away on the assembly line. Something like the Opel Vectra of our day – not as popular today as the VW Passat and far from an Alfa Romeo in terms of charisma, but affordable and reliable. In fact, if it wasn't for the book or the movie, the 1957 Fury would have been forgotten just like a lot of other giants from Detroit, with their chrome trim and sharp fins. Like the DeLorean DMC-12 from Back to the Future, the value of "Christines" jumped after the film, along with the number of enthusiasts.

A total of 24 Plymouth Fury, Savoy and Belvedere models were used during filming; the Savoy and the Belvedere were used due to their similarity to the Fury, since the Fury was already a pretty rare car. Of the 24, only two have survived to this day – both "Christines" lives in the States, in collectors' garages. The others could only regenerate themselves in the movie. Incidentally, about Christine's regeneration. This is one of the most impressive parts of the movie, especially given that CGI didn't yet exist and everything had to be done in good conscience. Car parts were made from rubber and plastic that were put in place with the help of hydraulics. Once everything was edited properly, Christine did a very persuasive job of rising from the dead. Even after one of the best scenes in the movie – when Christine, in flames, is chasing down one of the characters who had defecated on her dashboard with the intention of killing him – she is shown the next morning all nice and shiny as if she had just left Detroit yesterday. 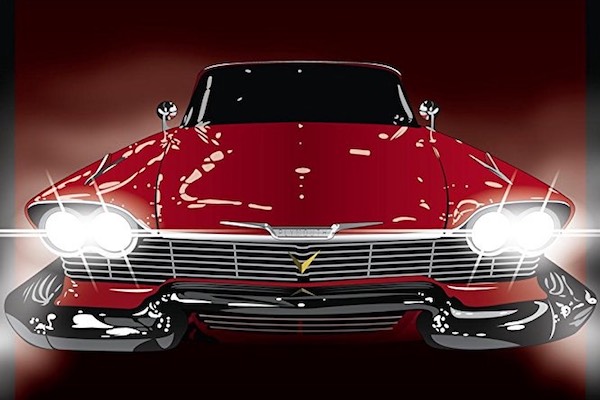 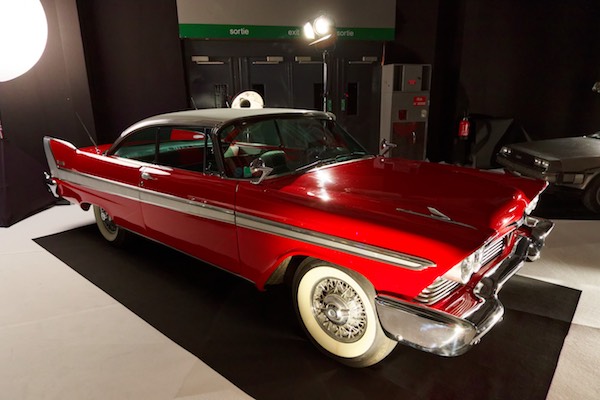 Another thing the movie has is the music. In order to recreate the atmosphere of the '50s Christine's golden years the movie features tracks like"Little Bitty Pretty One", Dion and The Belmonts playing "I Wonder Why", Little Richard's "Keep A-Knockin'", and many more. In both the film and the book, music is used as a means of communication between Arnie and Christine – the radio plays the melody that best reflects Christine's feelings at that time. If you're not just a petrolhead, but a fan of old rock 'n' roll, you will like Christine.

So, is it worth turning on Christine? Without a doubt – yes. In spite of the aforementioned shortcomings, it's actually a fairly good movie that will definitely appeal to anyone who has ever furtively thought about their car as if it was a girl. So grab some popcorn, stretch out in front of the screen and get ready for more than an hour and a half of listening to a classic American V8 player that breathes CO2 as well as a desire to kill.