The "Enzo e Dino Ferrari" racing track in Imola hosted the 2018 Motor Legend Festival from April 20 to 22. Not by chance, the event dedicated to motorsport history was staged in a symbolic location in a land traditionally accustomed to evoking motoring emotions. The festival was like an action-packed three days of motorsport history.

According to organisers, for the first time Italian fans had a chance to see the very cars and bikes that have contributed to motorsport history for themselves. The idea of the event grew out of the passion and experience of Vito Piarulli, organiser of Rallylegend, and Andrea Gallignani, an important exponent of the business world, historically tied to motorsports, Formula 1 in particular, who wanted to fill a gap by replicating the success of Rallylegend in the road racing sector: to treat fans to a motorsport experience in close contact with the champions of today and of the recent past and watch track exhibitions of racing cars that made world motorsport history by winning races like the 24 Hours of Le Mans or the Targa Florio and various Formula 1 Grand Prix.

20,000 spectators have attended the first edition of the Motor Legend Festival and they were able to get a close-up look at the world of motorsport. Cars and motorcycles on the track, meetings with some of the international stars, exhibitions of some of the key cars, reviews and insights behind-the-scenes at the Imola race circuit, one of many symbolic locations in an area indelibly associated with motoring on two and four wheels. Glamorous monocoques and aggressive silhouettes, champions and luminaries from the past and present, a kaleidoscope of motoring where passion reigns supreme. The atmosphere was truly breath-taking. 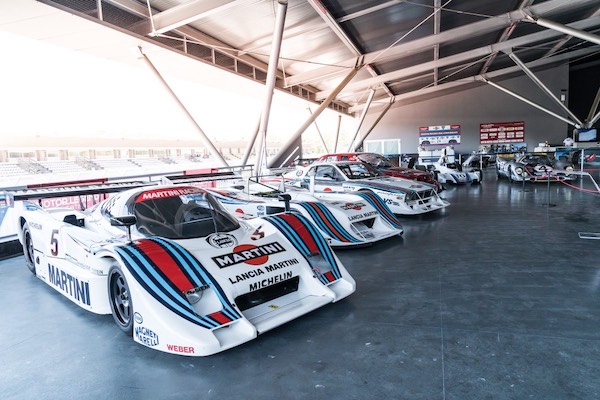 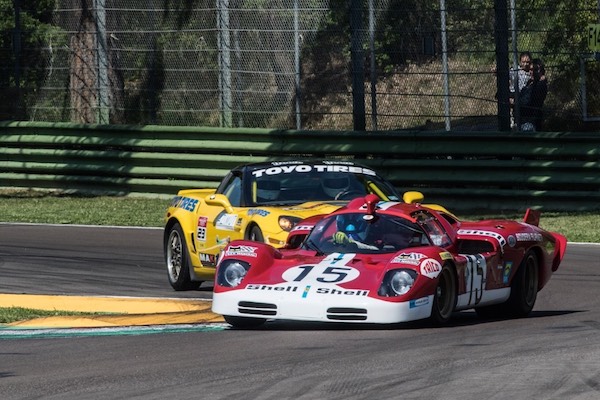 Meetings with the stars themselves have only confirmed the interest fans are showing in racing’s recent past. A tribute to Elio De Angelis, an event in which both Riccardo Patrese and René Arnoux took part, highlighted some previously unknown details about the great Roman driver, winner of the 1985 San Marino Grand Prix. Following on from this, Giacomo Agostini and Mario Donnini talked about the Italian ace’s experience in the world championship and the Tourist Trophy, while Riccardo Patrese, Erik Comas, Emanuele Pirro, René Arnoux, Pierluigi Martini and Arturo Merzario recalled various entertaining episodes in the career of Ayrton Senna. The Formula 1 book by Mario Donnini, spanning the period from 1950 to today, was also presented.

Martini Racing exhibited its racing jewels, with Patrese at the wheel of the Lancia LC1 and Pirro driving the Beta Montecarlo Turbo Gr.5, and then there was a second parade dedicated to the great motorcycle champs, including Giacomo Agostini, Johnny Cecotto, Phil Read, Freddie Spencer and Carlos Lavado. 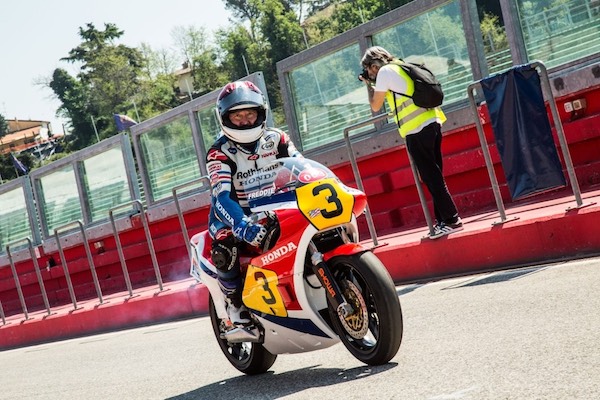 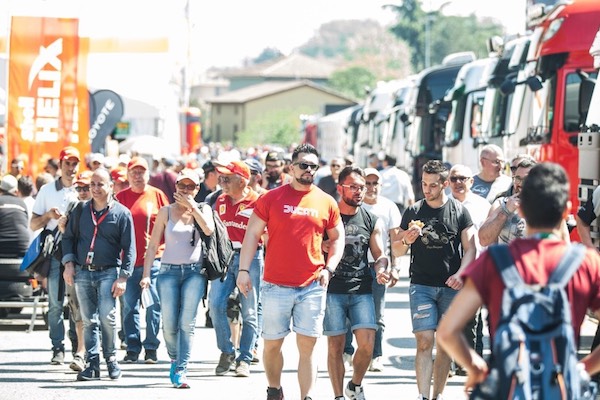 During Motor Legend Festival, the first races of the European FIA Masters Historic Championship, called the F1 San Marino Grand Prix, Elio De Angelis Trophy were held. Saturday race was won by the Williams of Irishman Mike Cantillon, ahead of that of Frenchman Christophe D’Asembourg and the Lotus driven by Thornton. Poleman Martin O’Connell dominated early on with his ATS, but was forced to retire. However, he was the fastest in the second race that took place on Sunday. The Brit dominated ahead of Brooks in the Lotus and D’Asembourg in the Williams. 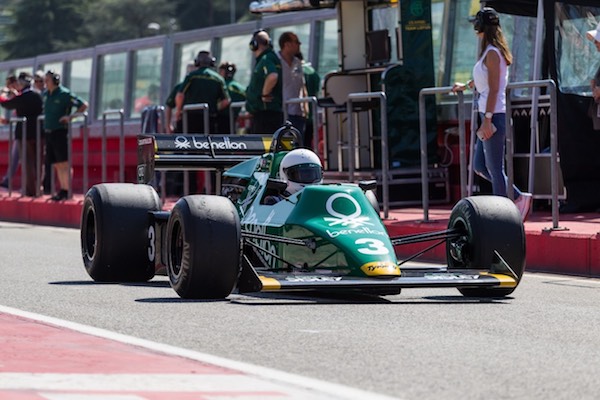 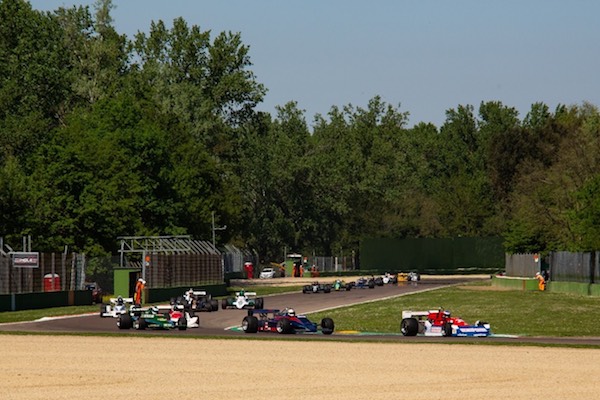 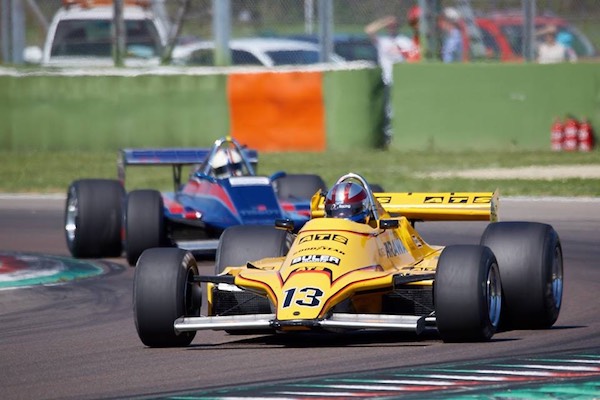 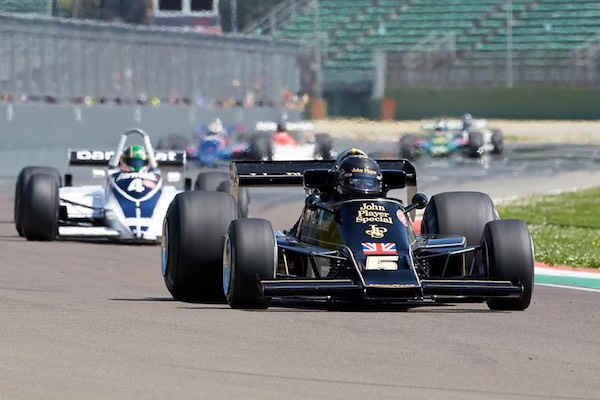 The final day saw Jacky Ickx, Mauro Forghieri, Paolo Barilla, Riccardo Patrese and Emanuele Pirro as the undisputed stars. All were able to reconnect with the very cars with which they achieved important results in the past.

Forty years after last doing so, the Belgian driver was back at the wheel of the Ferrari 312B with which he finished second in the 1970 Formula 1 championship. The single-seater, owned by Paolo Barilla, has been restored in recent years and is a unique and perfectly working machine. Also driving the single-seater was the Parma driver, more than happy to put his foot down. But when Ickx put it into first, making the 312B 12-cylinder boxer engine roar, the excitement in the grandstands was immense. 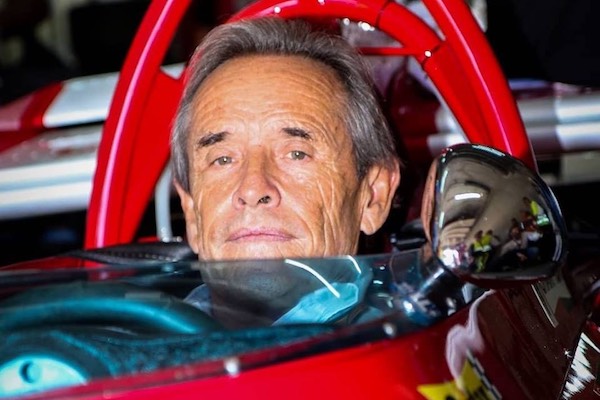 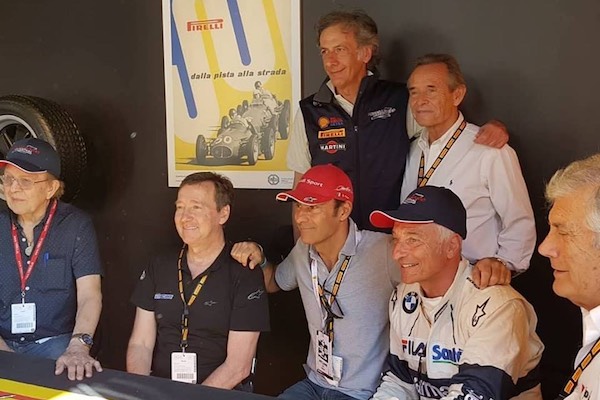 Patrese drove both the Lancia LC1 with which he just missed out on the 1982 sport title, and the Brabham BT49-Cosworth with which he won the Monte Carlo GP that same year. The Italian was amazed by the improvements to the single-seater, which then competed in the second historic San Marino GP, driven by its legitimate owner Joachim Folch-Rusinol.

The F1 Ferrari, world champion with Phil Hill in 1961, was also on track, along with the Alfa Romeos of the Portello team and all the Martini Racing vehicles.

There were also motorcycle exhibitions from Giacomo Agostini, Phil Read, Freddie Spencer, Johnny Cecotto and Carlos Lavado. Riding MV Agusta, Yamaha and Honda machines, they led a group of riders who had brought their precious bikes to Imola. Among them, Emanuele Pirro was keen to experience the thrill for himself, riding Freddie Spencer’s Honda 250.

To round out the weekend, the Ferrari Corse Clienti programme brought its F1 and XX Programme single-seaters, while long queues formed at the Pirelli stand for autographs sessions featuring all the drivers and riders present. There was a full house for the talk involving Jacky Ickx, Paolo Barilla and Mauro Forghieri. The trio spoke about their collaboration in Ferrari, the history of the 312B and the years the Belgian driver spent at Maranello. 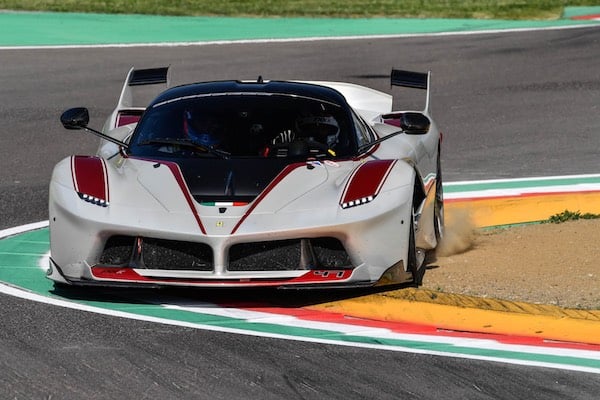 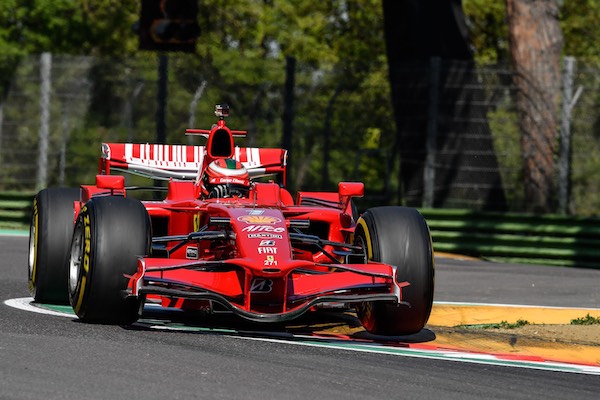 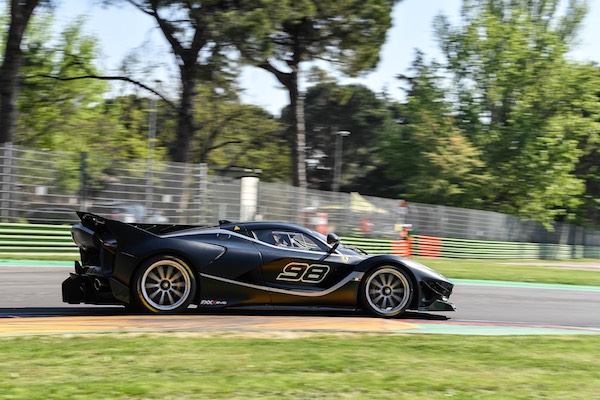 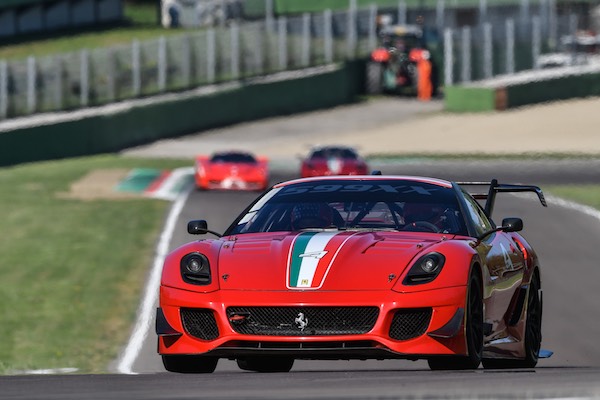 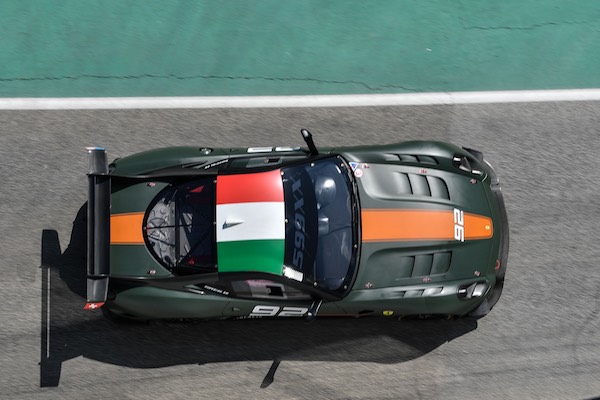 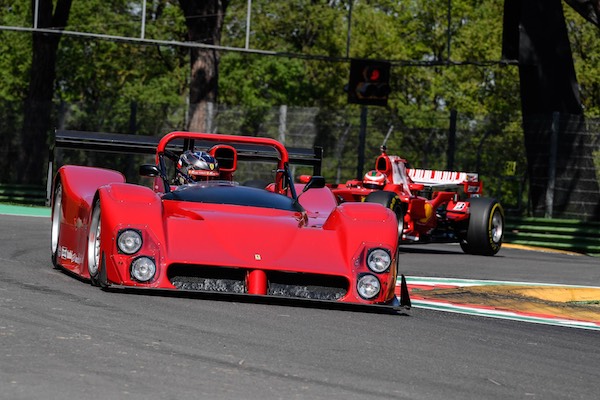 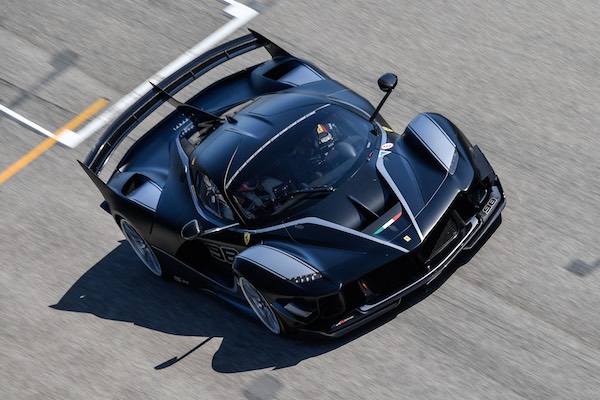 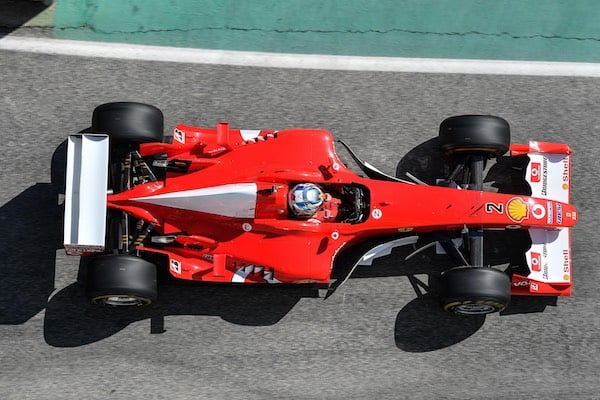 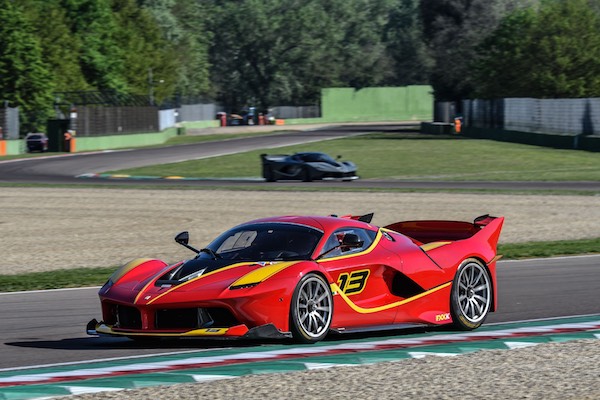