Crowds of girls swooned over him while cool guys wanted to be like him – the actor James Dean indeed was an American god in the 1950s. His premature death and the posthumous Golden Globe Award further strengthened his image as a movie icon.

The Porsche 550 Spyder that killed him has also become a legend which later got the label of a cursed car – even after the accident, the “Little Bastard” didn’t stop bringing misfortune.

After signing with Warner Brothers for his role in East of Eden in 1954, James Dean decided that not only did he want to earn fame in the cinema, but also pursue a racing career. Consequently, he bought a Triumph Tiger T110 motorcycle. However, his producers decided that driving a two-wheeler was too risky for the young movie star, so he soon switched to a used 1953 MG TD Midget sports roadster.

Lew Bracker – a close friend of the actor – recalled in several interviews that shortly after they met, Dean became enamoured with Porsches. So, right after the movie was filmed, he replaced the MG with a brand new Porsche 356 1500 Super Speedster. An interesting choice, given that this was a time when buying American cars like the Ford Thunderbird or the Chevrolet Bel Air was all the rage. However, even with its small-capacity engine, the tiny, lightweight Porsche was fast enough to keep up with its competitors. 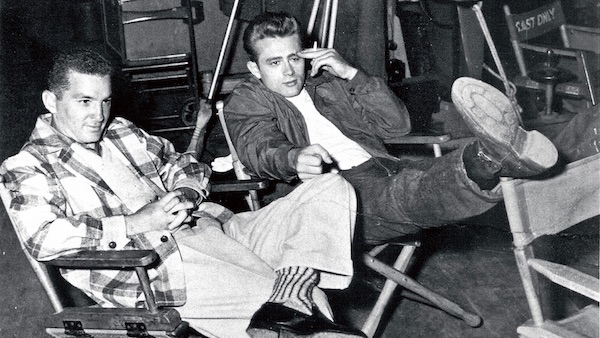 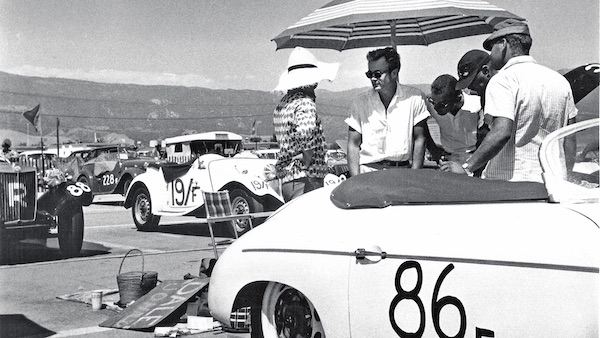 Right before filming his next flick, James Dean competed in the Palm Springs Road Races with this car on March 26–27, 1955. Like in the cinema, the actor’s début here was also a success: he was the fastest in the novice class on the first day, and the next day he came in second in the main race. Dean later raced in Bakersfield, and his third and final race with the Speedster was in Santa Barbara on Memorial Day

Dean then ordered a Lotus Mark IX sports racer, but the delivery of this car was delayed until autumn. Then, the actor suddenly decided to buy a new Porsche instead. This probably had something to do with a phone call that he received from a friend. In one interview, Lew Bracker explained how he had called Dean, beginning the conversation with the question “Guess what I saw in the window at Competition Motors?” The very next day, the actor showed up at his friend’s house with a shiny new silver Porsche 550 Spyder.

The new purchase was much faster and more potent than the Speedster that he had previously driven. The Spyder had a 1.5-litre naturally aspirated air-cooled 4-cylinder boxer engine. The engine size may have seemed lean compared to an American V6 or V8, but the 112 horsepower was more than enough for a sports car weighing in at just 550 kilograms and capable of accelerating to 230 km/h. Plus, the fact that the engine was mounted in front of the rear axle meant that it had more balanced weight distribution, better traction, and precision handling. 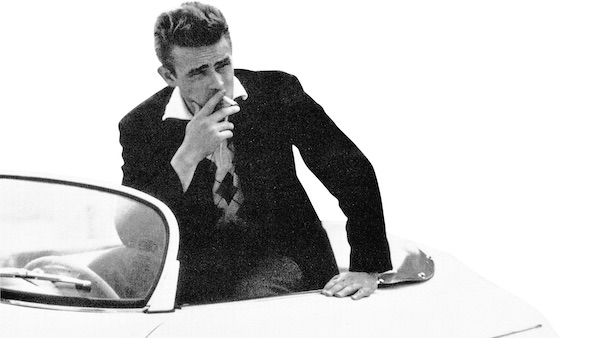 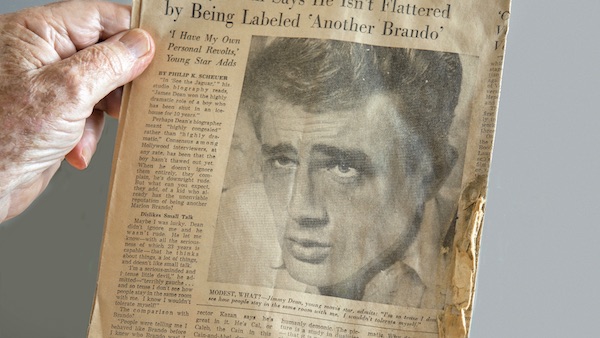 From 1953 to 1956, only 90 Spyders were produced, but James Dean wanted his Porsche to be unique. A couple of days after purchasing it – and just a week until the fatal accident – he turned to George Barris, a famous Hollywood car designer. Barris had customized numerous cars that were used in movies, including the Batmobile for the 1960s TV series. As per the actor’s request, the designer upholstered the seats in tartan; Dean Jeffries, who had a paint shop next door, painted “130” on the doors, bonnet, and the rear deck lid. He also wrote “Little Bastard” on the side, which was the nickname James Dean had famously given for the car.

That very same day that the 550 Spyder got its custom paint, Dean was cruising the streets of Los Angeles and didn’t pass up the chance to introduce himself to British actor Alec Guinness outside the Villa Capri restaurant. The superstitious actor told him that he thought the car appeared sinister and added that if James got in the car, he would be found dead in it by this time next week. The fatal accident took place on September 30, exactly seven days later.

Initially, Dean had planned to tow his 550 Spyder to the race in Salinas. However, the Spyder didn’t have enough break-in miles to compete in full capacity, so his mechanic – Porsche field engineer Rolf Wütherich – recommended that they drive it to Salinas instead. A few hours before the accident, the actor was pulled over and got a ticket for going 10 mph over the speed limit; apparently, this lesson was not enough for him. 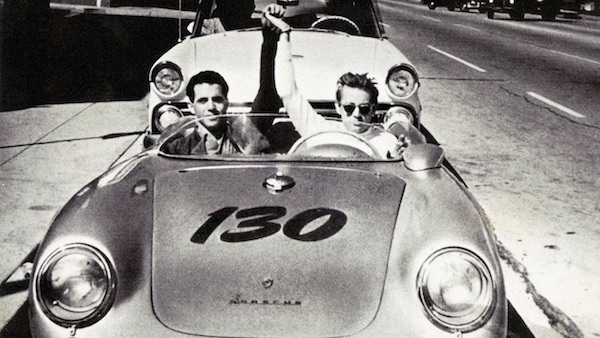 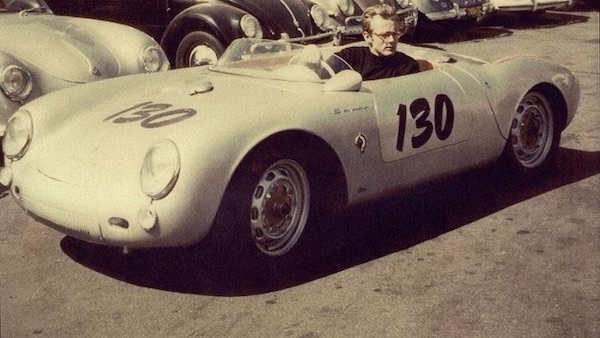 At around 6 pm, the actor was driving at 85 mph (almost 137 km/h) when he hit a Ford Tudor driven by a young student. The drivers didn’t have time to brake, so they collided head-on. The impact sent the heavier Ford broad-sliding more than 10 meters, while the lightweight Spyder flipped a few times, landing on its wheels in a ditch.

The Porsche mechanic was thrown from the car during the collision but survived. The student who drove the Ford got off with just a few scratches, but Dean, who was driving the Spyder, was trapped in the car, with his mutilated foot stuck between the clutch and brake pedals. Having sustained a broken neck and severe external and internal injuries, the actor died shortly after.

They say that, during the nine days that Dean had the car, Alec Guinness wasn’t the only one who had a bad feeling about it and warned him to be careful. The actor’s uncle, Charlie Nolan, felt uneasy about the Porsche, as did his fellow actor Nick Adams and Ursula Andres – his ex-girlfriend who was with him when he bought the Spyder.

If that wasn’t eerie enough, the Porsche 550 Spyder became even more mysterious afterward. The actor’s death wasn’t the last of the misfortunes surrounding the race car. The Porsche, which was just a pile of aluminum and steel after the crash, was purchased by George Barris, who had previously worked on modifying the “Little Bastard”. He brought the wrecked carcass back to his workshop, but soon after, the Porsche dropped off its trailer and broke a mechanic’s leg.

A bit later, Barris sold the engine and parts of the chassis to two Porsche 550 owners; while racing against one another in cars that had parts from the “Little Bastard”, both men crashed. One of them hit a tree and died instantly, while the other got lucky and survived, albeit with some severe injuries. It’s said that in his workshop, Barris still had two tires from the Porsche which were untouched in the accident. He sold them, and not long after, both blew out simultaneously, causing the car to run off the road. And finally, a thief who was later caught ripped his arm open on jagged metal while attempting to steal the steering wheel from the wrecked Spyder. After this incident, Barris decided to hide the cursed car.

After a lot of persuasions, the California Highway Patrol took over the 550 Spyder to use it as a highway safety exhibit. However, the first exhibition failed before it even began, because the garage where the car was being stored caught on fire and burned to the ground. As coincidence would have it, the “Little Bastard” didn’t suffer any damage it. 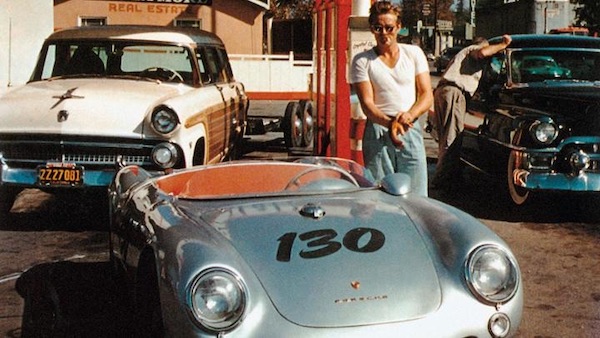 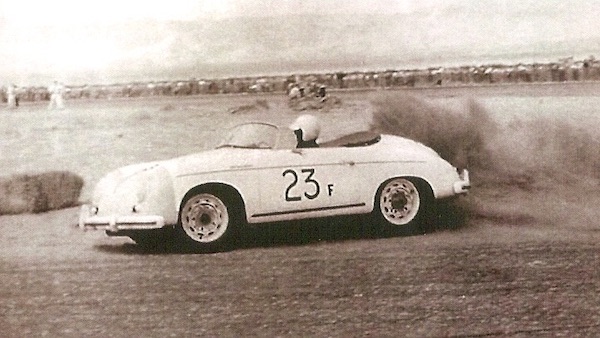 The second exhibition wasn’t a success either. While the car was on display at a school in New Orleans, it just fell to pieces, with one piece breaking the hip of a student standing nearby.

A fatal accident occurred when James Dean’s former race car was being transported. The truck lost control, and the driver somehow managed to fall out of the cab, only to be killed when the wrecked Porsche even more mysteriously fell off the back and crushed him.

Two other trucks carrying the Spyder also got into accidents where, luckily, no one was injured. But after a couple of years, the California Highway Patrol decided that it was time to return the car to Barris. Only the Porsche never made it back to his workshop – while transporting the car back to Los Angeles in 1960, it simply... vanished. To this day, it’s as if the “Little Bastard” disappeared into thin air, but people occasionally surface who claim to have seen the cursed Porsche or have information on its whereabouts.

To mark the 50th anniversary of James Dean’s death, the Volo Auto Museum in Illinois announced a $1 million reward for anyone who finds the remains of the 550 Spyder. A man claiming to know where the car was hidden actually did come forth a few years ago, but after lengthy negotiations and even a lie detector test, no agreement was reached.