Six cylinders in a motorcycle engine are like six cameras in a phone - no one knows who needs them, but it still sounds promising. This is how the Honda CBX, now known as the CBX1000, became one of the most iconic six-cylinder motorcycles.

The Japanese, and especially Honda, changed the whole world of motorcycling in the 1970s. Until then, features like reliability, power, good handling and reasonable price were incompatible with each other, but the Japanese proved it was possible. In 1969, Honda caused a hurricane in the existing motorcycle market with the CB750, which later became the star of the so-called "Universal Japanese Motorcycle". But Honda wanted to go even further, and in the mid-'70s started working on a new flagship, the CBX. 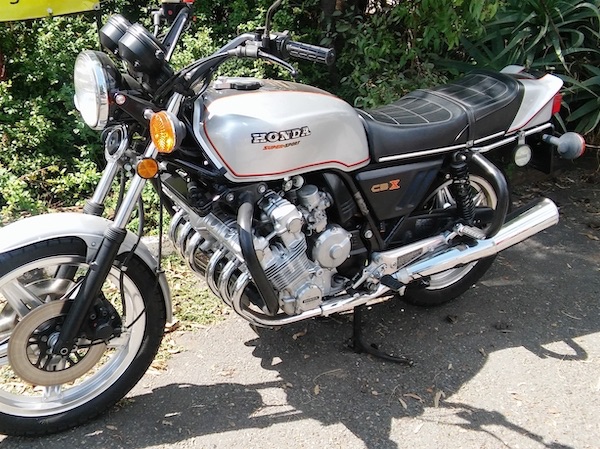 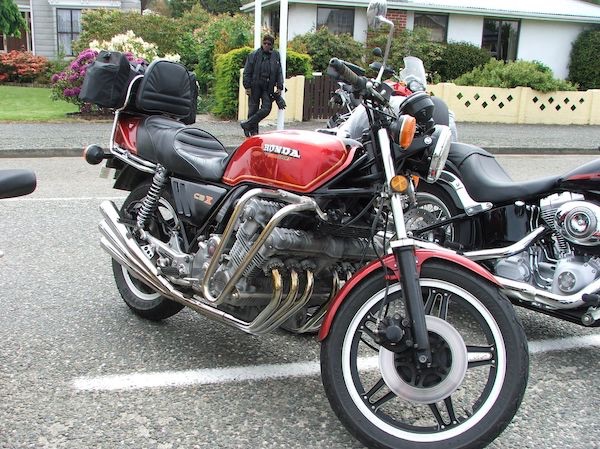 Soichiro Honda wanted a faster and more powerful motorcycle than the CB750, so the Japanese decided that four cylinders would not be enough for this purpose. This was not an adventurous decision since Honda has had a lot of experience with the six-cylinder engines used in racing since the 60s (the most famous of which is the RC165 / RC166).

In truth, six-cylinder racing Honda had only 250cc. Because CBX guys planned to make the engine four times bigger, they faced a lot of challenges. Keeping the six inline and retaining the width and weight of the motorcycle within the bounds of sound mind was a crucial task for Honda R&D chief Shoichiro Irimajiri.

Iri (as he was called) realized that weight would be the biggest problem, so some knots had to go through an "aluminum diet" and some even used magnesium (probably for the first time in serial Honda). 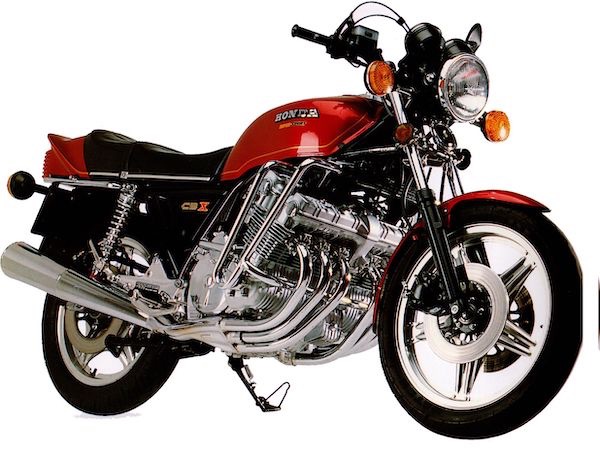 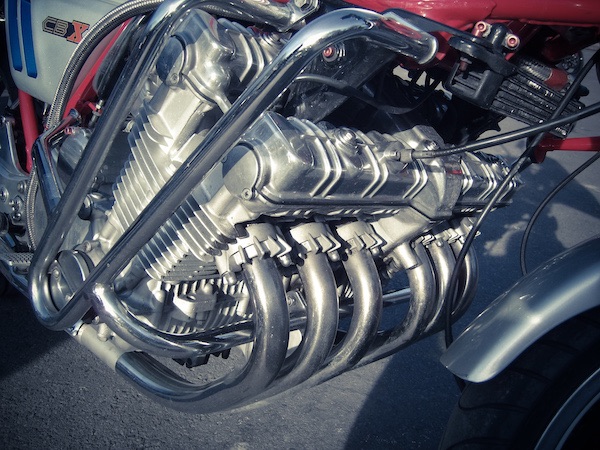 In any case, they managed to squeeze into 250kg - that was the so-called net weight of the motorcycle. Iri wanted it to weigh less, but it was not a tragedy when it comes to scaling big bikes especially since the CBX was aimed at the US market, where the demand for full-size motorcycles was huge.

In 1978, the CBX1000 went on sale and became crucial for Honda as the CB750 was already a bit older and had serious competitors (Kawasaki Z1, Suzuki GS750, Yamaha XS750). So, Honda wanted to set a new standard again - as they did with CB nearly ten years ago. The six-cylinder intrigue was the perfect fit because while the ~ 1000cc engine was no longer a sensation, those six cylinders were something special. 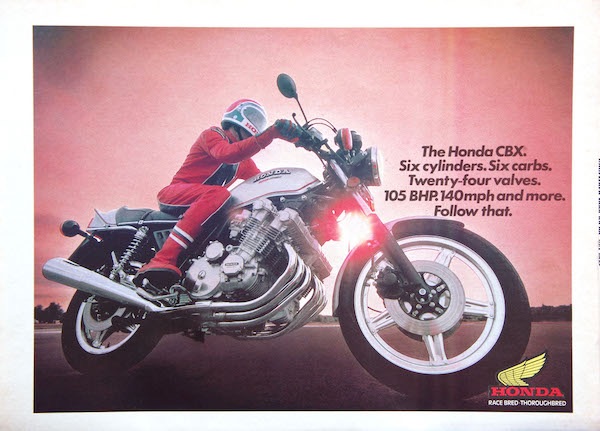 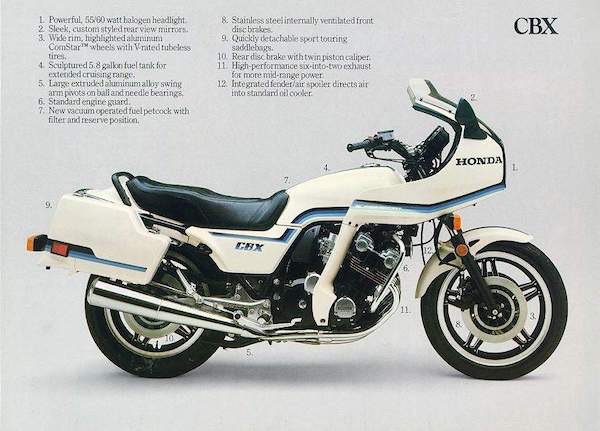 Yes, Benelli has been producing the six-cylinder Benelli Sei 750 since 1972, but the Italian model was niche, so it didn't get much attention. And with its CBX1000, Honda has been able to attract the attention of motorcycle riders worldwide.

All the charm of the CBX revolved around the engine and only about it. The 1047cc, 24-valve, double-overhead-camshaft, six-cylinder engine output 105 HP at 9000rpm. It could also reach 218 km/h (which was probably the first motorcycle in the series to have >100 HP).

The US journalists at the time called such power and speed meaningless because of the US National Speed Limit of 55 mph (89 km / h). But the goodness of the CBX was that it evoked emotion even when standing. The CBX was like the essence of a naked bike - a big shining motor and nothing unnecessary. 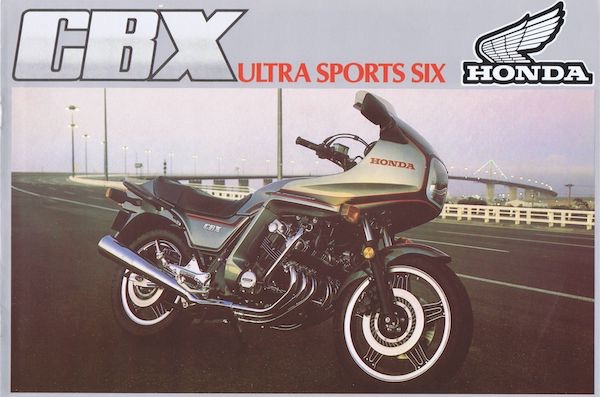 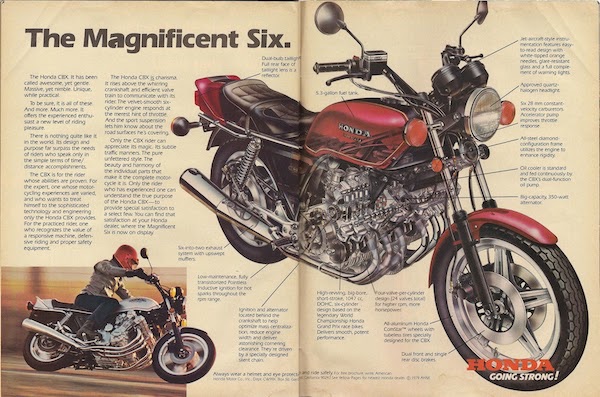 Still, sales were not good. The CBX was expensive and might have scared many with its sophistication, so people preferred the CB900F, which was a tiny bit slower. The 1981 Honda changed the format of the CBX a bit, and the company tried to sell it as a sport touring class after some refinement. However, that did not help much, so the story of 1982 CBX ended. There were still a lot of unsold motorcycles left at dealerships, which Honda simply donated to various technical schools.

The fact that the CBX1000 has been in production for only a few years probably helped it enter history. The model has gathered a cult following and, according to many enthusiasts, deserves its spot in top motorcycle charts. There are not many of them left, because not many were sold new. Moreover, quite a few did not reach our days due to poor maintenance or because they were crashed. CBX prices are still in the four-zero zone at the moment, but it will most likely not last long, knowing that there are not so many unique models for tech romance.