VW Schwimmwagen – The Most Mass-Produced Amphibious Car in History

It is certainly not the most beautiful car, but you should not be surprised if, when stopped on the street, this vehicle would gather more curious people around itself than any other sports model.

On land, this "bathtub on wheels" looks a bit strange, but when it comes to the verse for which it is intended, the overall picture slightly changes.

It is a VW Type 166, also known as the Schwimmwagen (i.e. a floating car). One of the most interesting cars in the history of the automotive industry, where everything is extremely functional. No surprise as it was designed for the German Wehrmacht, based on KdF Wagen (Kraft durch Freude) model by Ferdinand Porsche. 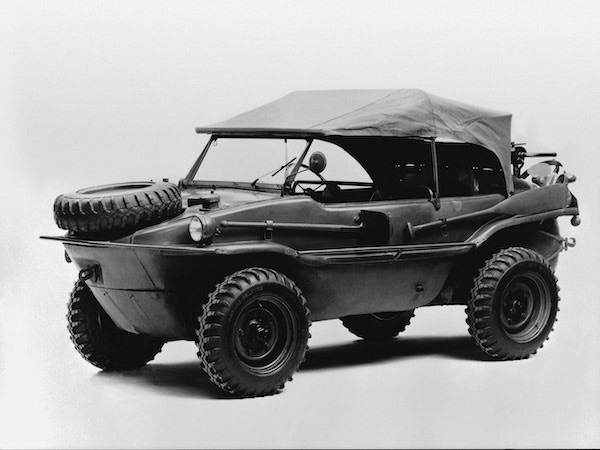 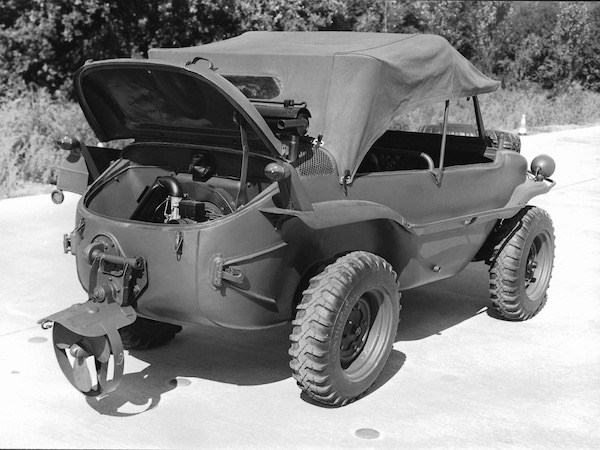 Hans Trippel, a renowned builder of floating cars in the Third Reich, created several original designs for amphibious cars. However, Trippel had no factory of his own (after the French occupation, he was given the Bugatti factory in Molsheim). So Erwin Komenda, the designer of the first Ferdinand Porsche car, was tasked with developing a massive amphibian vehicle for the army.

After examining Trippel's design, Wolfsburg engineers used the newly launched VW Beetle engine and other components to produce the amphibian VW / Porsche Type 128. When the first 30 cars were tested, they performed well. After Wehrmacht made his comments, in 1941 the manufacturing of the VW Type 166 began. While Type 128 was designed for engineering units, Type 166 was for motorized shooters, just like a lightweight SUV. 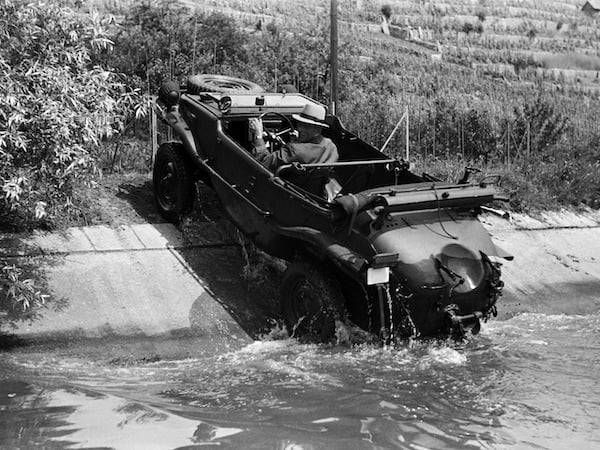 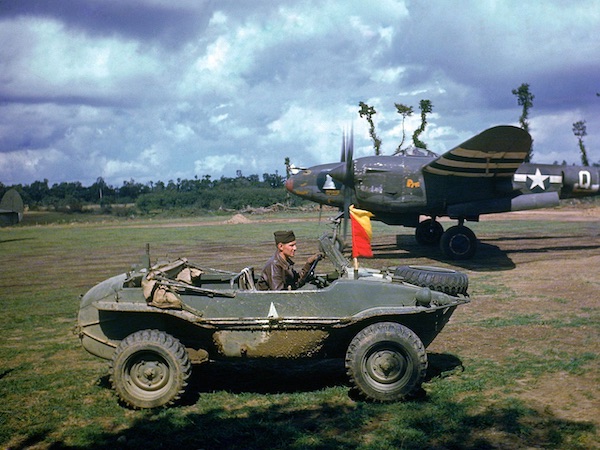 Testing of the new car began in August 1941. Ferdinand Porsche later shared his memories: "We were able to drive up to some relatively high hills that have never been driven on, such as the Kitzbüheler Horn. The parking lot at the top was so tiny that the car could not turn - it simply didn't have enough space. We had to lift the car by hand and turn it in the right direction!"

After the successful completion of the tests, serial production began. "Body-baths" were manufactured by Abi-Budd in Berlin, Germany's most famous metal body manufacturer at the time. By the end of 1942, 511 units of VW 166 had been produced.

Its design was essentially similar to the Porsche 128, but it was more compact and lighter: 3.8 m in length and 900 kg in weight. This small car accommodated four soldiers with full armament and was able to transport them wherever the tracked vehicles could pass. And that is with a mild 4-cylinder air-cooled 1.1-litre, 25 HP engine! By comparison, the famous Willys MB had 60 HP. 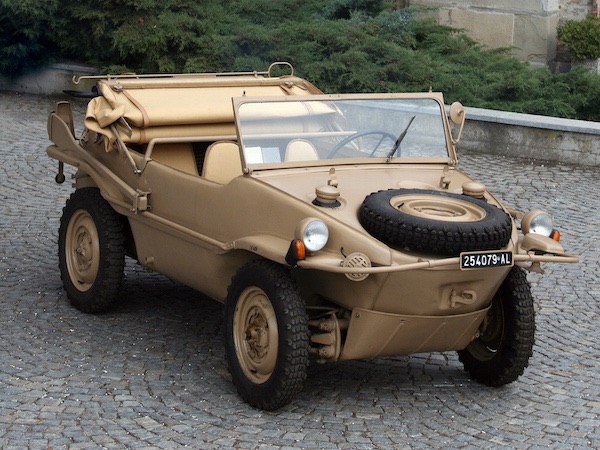 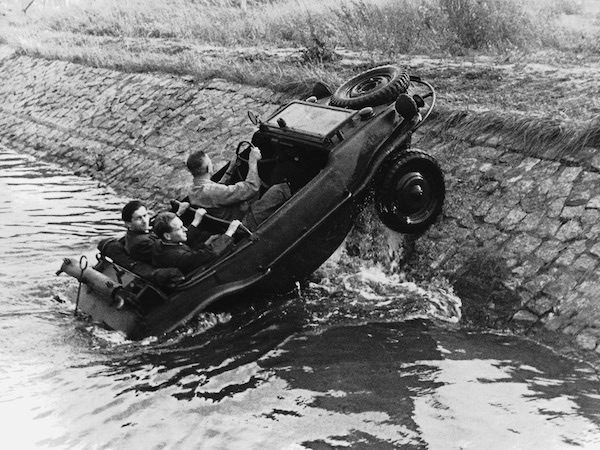 The engine was equipped with a 5-speed gearbox with 4 "normal" gears and one "crawl" gear. Maximum speed in 4th gear is 90 km/h, and in sliding mode - 3 km/h. Self-locking differentials have been fitted to increase the passage, and reducers have been added to the wheel hubs for increased ground clearance. "Schwimmwagen "had a rear-wheel-drive with an option to enable the front axle in bad driving conditions.

The car has a distinctive look with a spare wheel on the front, a nose and a handrail on the sides, which is useful when swimming.

In the water, the amphibian was moving with the help of a hinged propeller. A chain gear drove it from the crankshaft end that protruded from the housing. Two paddles helped reach the shore in the event of an engine failure, whereas the front wheels turned the steering wheel. The speed in the water is 12 km/h, using 10 litres of petrol per hour. The fuel tank's capacity is 50 litres, allowing to travel 520 km on land. 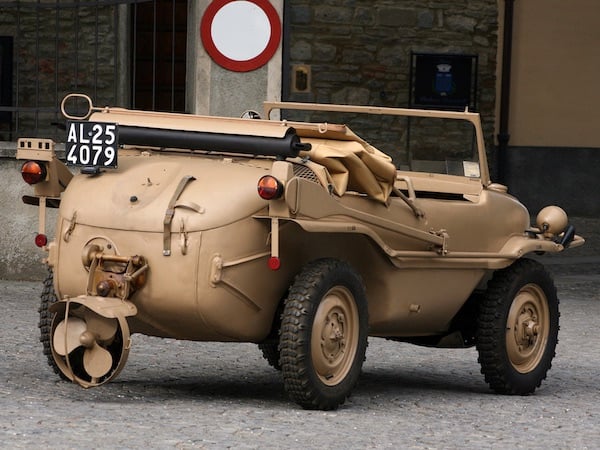 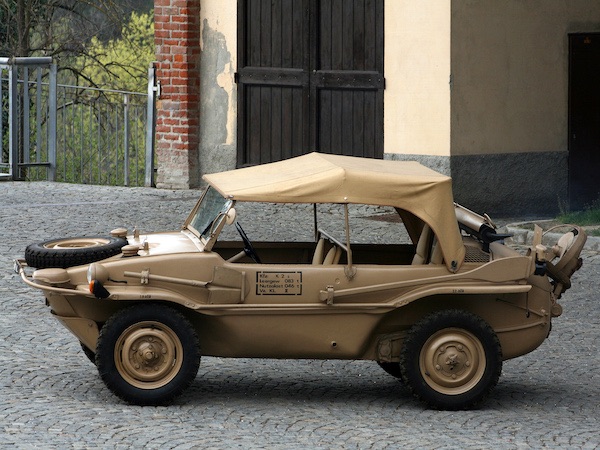 By mid-1944 more than 14,000 units of "Schwimmwagen "were made in Wolfsburg and more than 1,300 units in Porsche factory in Stuttgart. After that, production had to be discontinued - bombings destroyed the Ambi-Budd workshops and damaged the factory in Wolfsburg. However, the Schwimmwagen has become the most popular amphibious car ever made. It is estimated that around 190 VW Type 166s exist in today's world. Some of them are in museums, most of them in the hands of car lovers, and they are not going to sell their beloved ones.