Looking at the short history of Lexus, one can see where and when the Japanese made a mistake. What kind of mistake? They got stuck in time. When was the last time you saw a Lexus car and wanted to say WOW ? A long time ago, isn’t it?

However, the newest Lexus LS and LC models, which are the latest in production, showcase the company's design advancements. It is the evolution of past experiments. A refined evolution to the smallest detail, which is a perfect reflection of the Lexus brand philosophy, attitude and desire to be part of the 21st century.

Looking at the Lexus flagship, the LC Coupe, you can instantly recognize the design elements that were once seen on other models of the brand. For example, giant radiator grille, boomerang-shaped daytime running lights, beefy but not overloaded body shape. Lexus has made a great decision and focused on a variety of little things that compliment each other.

The interior of modern Lexus cars has always had its strengths and weaknesses. Lexus has always been able to delight with its excellent assembly quality and enviable facing. When you sit inside a Lexus, you always know why you are paying €50,000 or, in this case, almost €120,000. 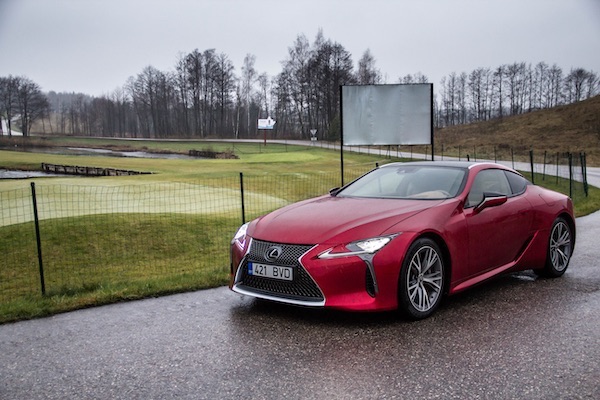 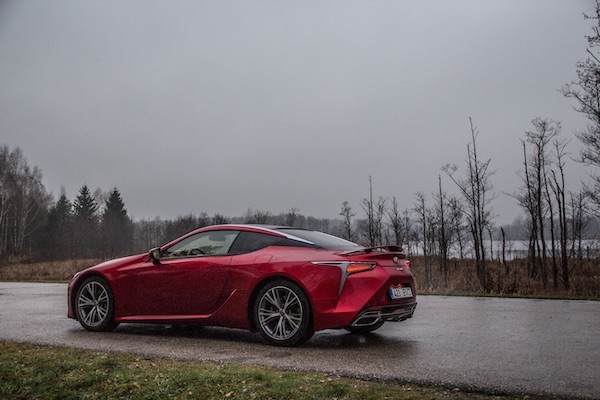 The Lexus LC is no exception. The interior design of the car deserves the highest marks, but it does not lack strange solutions. For example, the top of the dashboard has two round knobs - one on the left and the other on the right. What are they for? The first one changes driving modes, while the other lets you disable electronic assistants. The solution is not standard, but we should not forget that we are talking about an unusual car.

The vast majority of ultra-luxury and prestigious cars with coupe body type come out of the factory with a petrol engine having one or even two turbines. Look at Audi, BMW, Bentley or Mercedes-Benz - they have been using smaller, turbocharged engines for some time. Meanwhile, Lexus demonstrates that turbocharged engines are not the best option, and we agree. 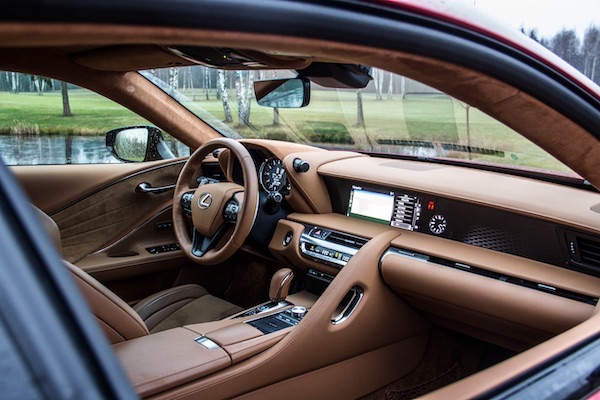 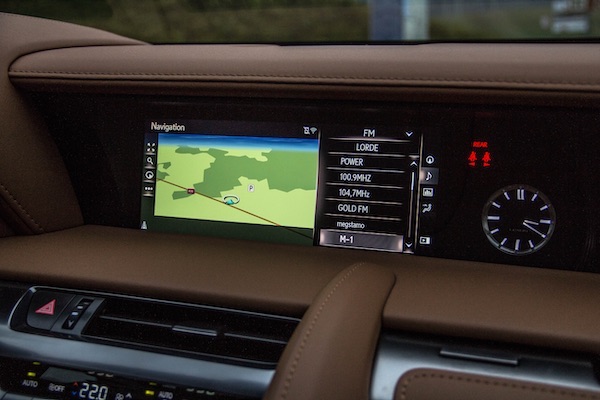 The Lexus LC can be equipped with a hybrid powerplant consisting of a 6-cylinder, 3.5-litre engine and a pair of electric motors. This eco-friendly power unit squeezes out 359 hp and 348 Nm of torque. Lexus claims that with this powertrain, LC coupe accelerates up to 100 km/h in 5 seconds, reaching 250 km/h maximum speed. Meanwhile, the model we tested has a much more serious unit - the 5-litre, 8-cylinder natural-aspirated engine, named after the 2UR-GSE, capable of delivering 447 hp and 580 Nm at 4800 rpm/min.

Exotic, intriguing and smile-inducing, the engine is paired with a 10-speed automatic transmission! It is not a cleverly calibrated CVT gearbox - it is a pure-blood automatic machine. This all-new aggregate is an excellent companion to the 8-cylinder, as gear changes very quickly and precisely. There's not even a minimal delay, which is very helpful when you want to downshift and depress the accelerator pedal to the bottom to hear a fantastically roaring engine. 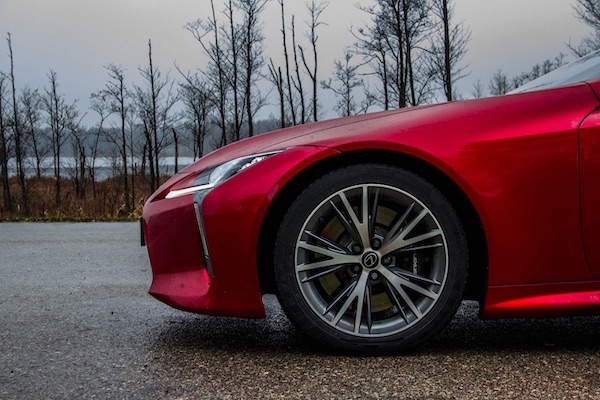 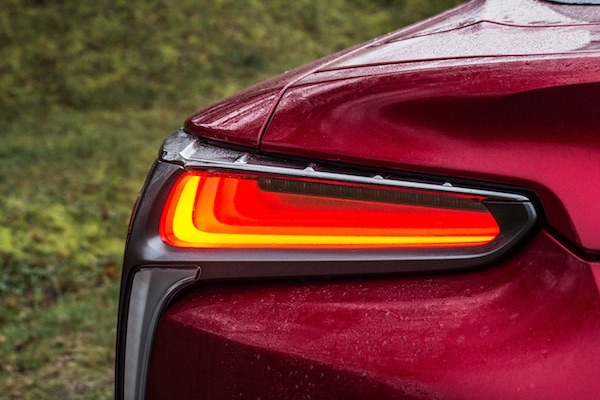 To emphasize the dual character of the LC Coupe, Lexus has equipped the car with five driving modes: Eco, Comfort, Normal, Sport and Sport + S. If none of these driving modes are right for you, you can always select Custom mode. Eco is perfect for everyday commuting, and Sport will be a great help when you want some adrenaline rush.

When driving quietly and smoothly, both the engine and gearbox work in the background. They don't want to remind of themselves and understand when you want to listen to your favourite band's album through the amazing Mark Levinson sound system. The transmission shifts gently and smoothly - it does exactly what you expect in comfort mode.

The work mode of a gearbox changes in Sport or Sport + S mode. The 10-speed unit then shifts gears faster and more aggressively, but the transmission gives ultimate pleasure when you take the control into your own hands. We switch to Manual mode and use the paddles behind the wheel - and you know what? That's when the enormous potential of the natural-aspirated engine can be realized. 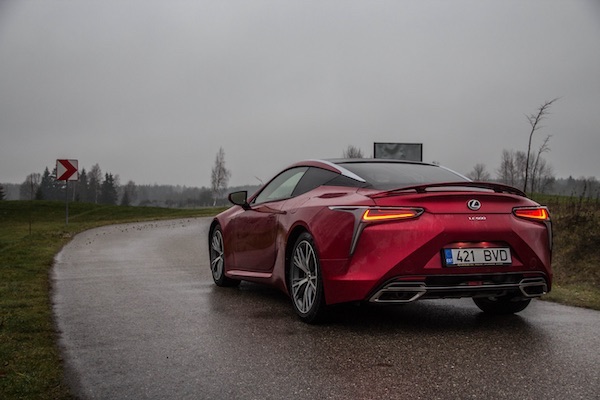 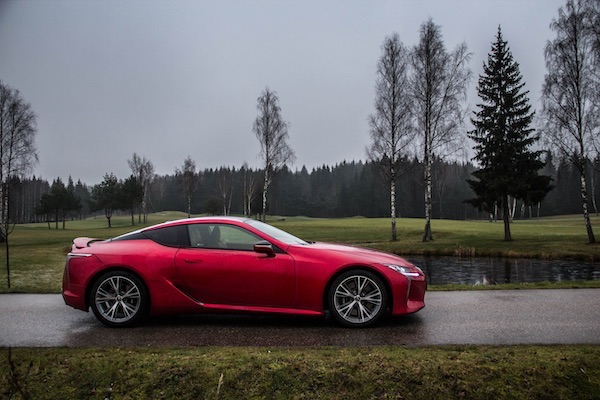 The engine deserves a separate bundle for compliments. It's a delicacy created by Lexus engineers that has several different voice timbres. At first, the engine roars and grumbles like a muscle car. As the buzz rises, the low and harsh sound is replaced by the symphony intrinsic in Italian cars. And the resolution of this entire concert is reached with the engine crossing the 4,000 rpm limit, revealing the identity of the 8-cylinder engine - sung as a top-notch opera soloist.

Lexus has always prioritized comfort, even when company engineers start working on ultra-sporty and fast RC F or GS F modifications. The Lexus LC, which is comfortable without sacrificing athletic control, was no exception. Indeed, it is a delicious blend of comfort and dynamism. 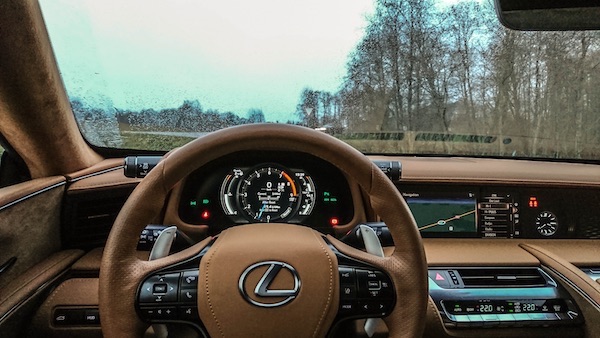 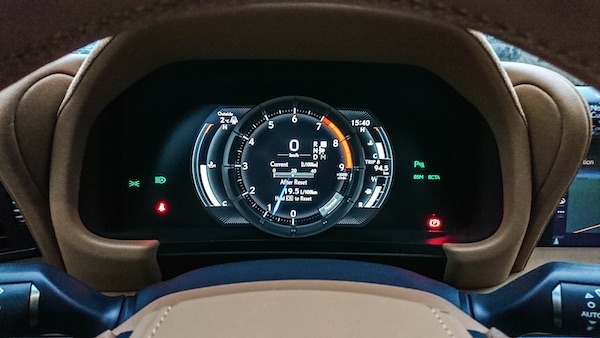 The sporty character of the car is exemplified by its impeccable, low driving position, which is surrounded by curved shapes and an extremely tall digital dashboard. In addition, the model we tested was equipped with a four-wheel-drive system and a limited-slip differential.

At first glance, the Lexus LC may seem clumsy and cumbersome when it comes to turning around in a particularly tight parking lot. But at nearly 4.8 meters long and almost 2 meters wide, the car feels like a compact hatchback. On very narrow streets, it feels like a much smaller car. For this dexterity, we should thank the four-wheel steering system, which significantly improves the manoeuvrability of the vehicle in tight spaces and high-speed turns.

With the car facing the country road, the Lexus LC continues to amaze and display vitality and liveliness - features that are typical of a Porsche 718 Cayman or other more compact sporty models, rather than a car that weighs almost 2 tons. 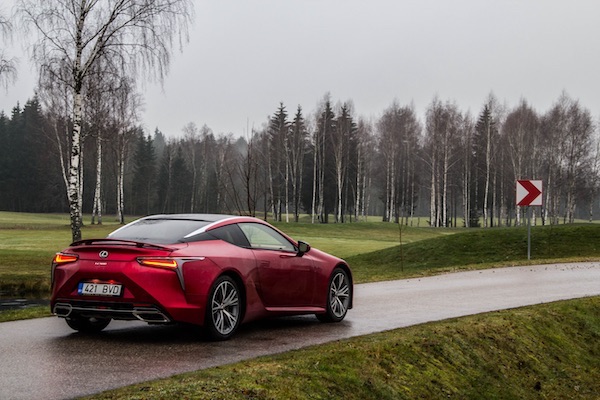 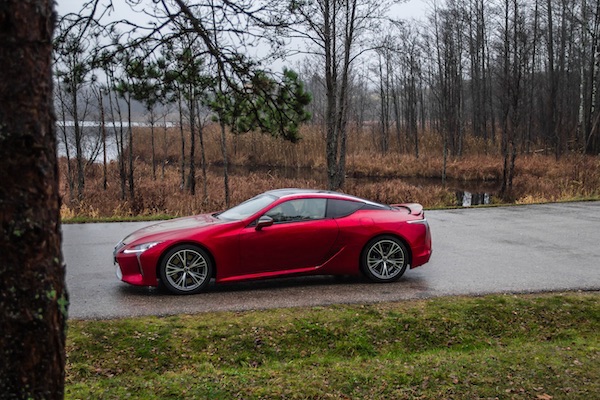 The biggest surprise is the excellent suspension balance, which allows handling the car progressively and accurately without worrying that the front will suddenly lose grip and start slipping. Of course, the two-ton weight limits the dynamic capabilities of the Lexus LC, but in terms of overall kit and behaviour when in action, it is one of the most fun Lexus cars to drive.

The Lexus LC is a perfect example of what we want from every model of this company - the wow factor that has been so lacking and missed. With this model, Lexus was able to impress us very well. If only Lexus could create more models with LC charisma rather than SUVs, it would soon be envied by the German premium trinity.