Since forever, there has been an intrinsic connection between the car and music: both represent a sense of individuality and a spirit of the time. Most importantly of all, both represent freedom and self-expression.

A specific car - a classic US muscle car such as a 1968 Dodge Charger, for example - could be compared to Motown with its Motor City roots and working class appeal. Meanwhile, the striking whitewall tyres, outlandish fins and the chrome jingle-jangle of a1955 Chevrolet Bel Air capture the zeitgeist and free-spiritedness of post-war America.

Amongst those who subscribe to the idea of the link between cars and music is Erikas Bakšenskas, the founder of Petrol Passion. The brand was created in 2018 in Lithuania - a country whose capital, Vilnius, prides itself on its thriving arts and car culture scene. Through its series of striking automotive-themed prints and t-shirts, Petrol Passion compounds Erikas’ love of modern classic cars, digital art, and photography.

The brands’ most popular range - Eighties Sunset - - has captured the attention of youngtimer or “modern classic” car enthusiasts across the world. Petrolheads in the United States, Europe and Asia have been won over by the brand’s synthwave-inspired interpretations of dashboards from 1980s modern classics such as the Toyota AE86 and Audi quattro. What’s more, Erikas’ designs capture the spirit of the ‘80s with their striking bold colours, and visual popular culture references from the era.

As fans of the modern classic and the synthwave sound and aesthetic, Dyler.com recently spoke to Erikas from his studio in Vilnius to gain some insight into what inspired him to set up Petrol Passion, his love for understated design, and the connection between cars and fashion. 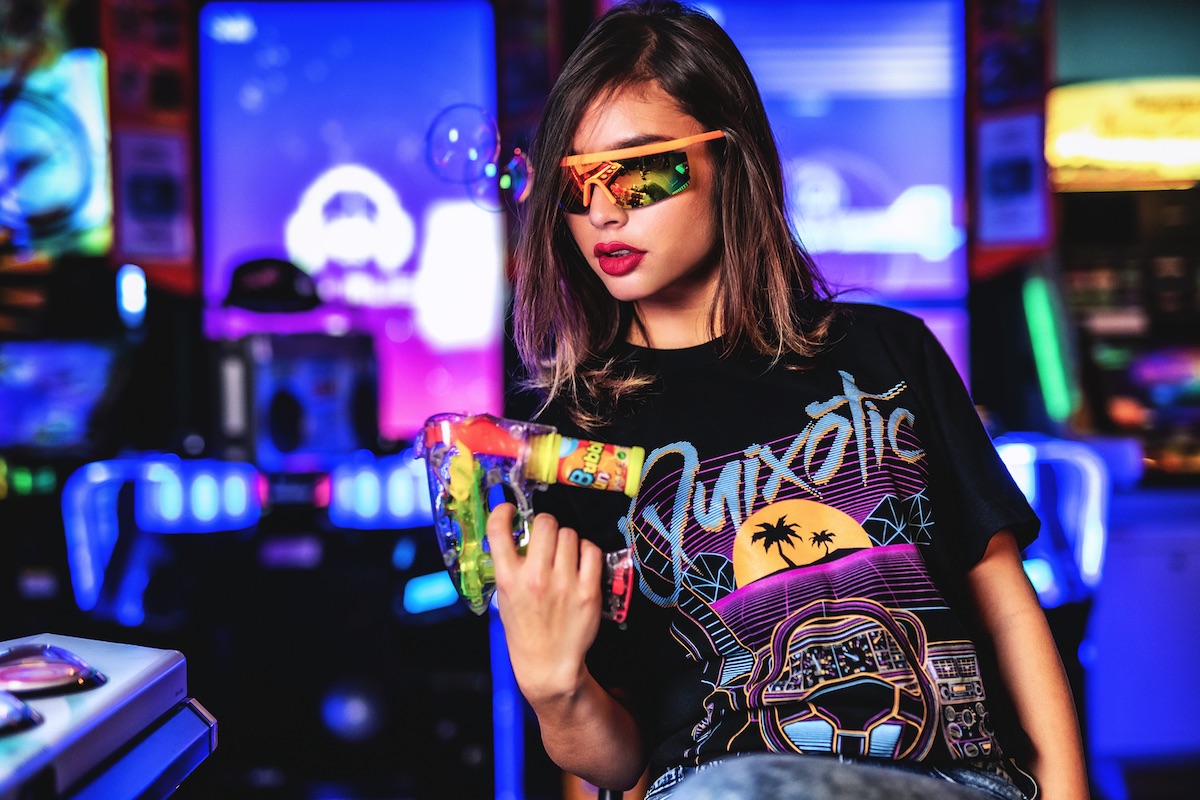 Dyler.com: You were born in the late 1990s in Lithuania - a time when the country was successfully making the transition from a planned economy to the free market after five decades of occupation by the Soviet Union. What was the first car that made you realise you're a car enthusiast?

Erikas Bakšenskas: To be honest, I don’t have very early memories associated with cars from my childhood and that period. I have more vivid memories when I was about 10 years old, so these are around 2008 and 2009. Lithuania had joined the European Union in 2004, and that taste of the 1990s transition period was fading away.

At that time, my dad owned a Volkswagen Passat B3, it’s not exactly a modern classic, but I really loved it as a kid! I would be more than happy to say that it was the “gateway car” that made me the car enthusiast I am today.

I’ve also been a fan of mechanical things since forever, so I never skipped a chance to watch my dad fix the Passat or help him fix it. I remember many hours as a kid holding a flashlight to help him and being yelled at for doing it wrong [laughs]!

Talking about the 1990s though, in my hometown there were a lot of cars left over from the Soviet period from the ZAZ-986 to the GAZ-240 and everything in between. 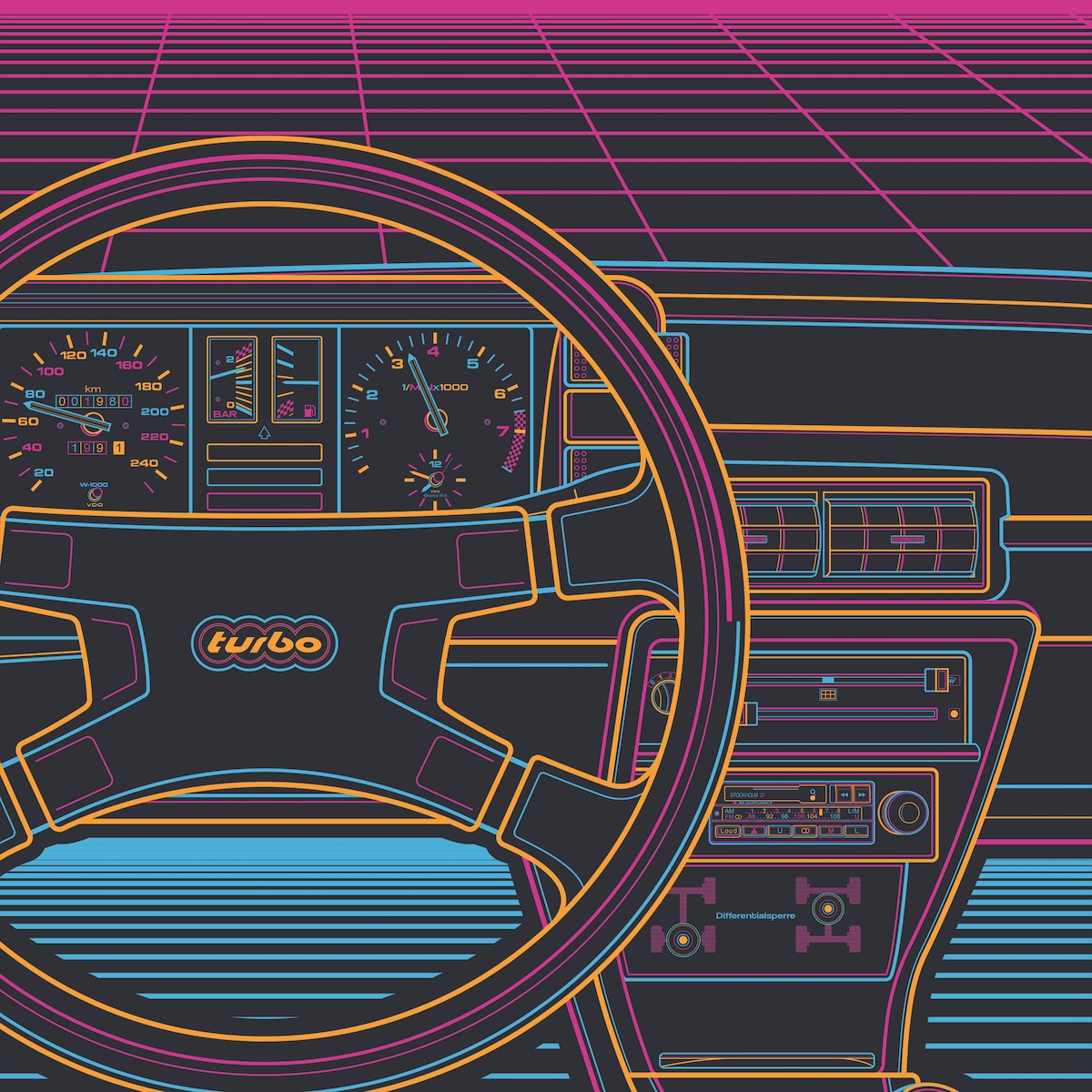 Dyler.com: The designs in the Eighties Sunset range are 1980s youngtimers - the Toyota AE86, Audi quattro and Volvo 240, to name a few - as opposed to the stereotypical supercars from the time such as the Ferrari Testarossa and the Lamborghini Countach. Why?

Erikas Bakšenskas: Understated cars are my jam, really, and many 1980s youngtimers fall into this subtle category. I love cars that are far from perfect, and this is the main reason why they appeal to me and a lot of other people, too.

Without doubt, these aren’t the best handling cars ever made, but there’s just something about them with their squeaky plastics, digital dashboards and k-jetronic injection systems that really make me excited. I enjoy the feeling of the car being analogue too, in that I mean it’s just you as the driver and no electronic driver aids to interfere with the driving experience. There’s a thrill in reaching a car’s limit when you’ve only got a quarter of the throttle open and you’re not even in the danger zone yet...

From an aesthetic point of view, I also think cars from this era have aged well and a few honourable mentions should go to the Sacco-designed Mercedes’, as well as the Giugiaro-penned Volkswagens. These cars were designed and made during a time when safety and fuel economy wasn’t a priority, so there was quite a bit of diversity in car design across from all the manufacturers.

To wrap up this answer though, I think why I chose to focus on youngtimers and not supercars from the 1980s is simple - it’s nostalgia. Car enthusiasts of around my age, 21, to let’s say 30, grew up around these cars when they didn’t have the ‘modern classic’ or ‘youngtimer’ tag. Nowadays, they’re becoming increasingly rare and they still look good, so seeing one brings up a lot of feelings and memories of nostalgia, that’s for sure. 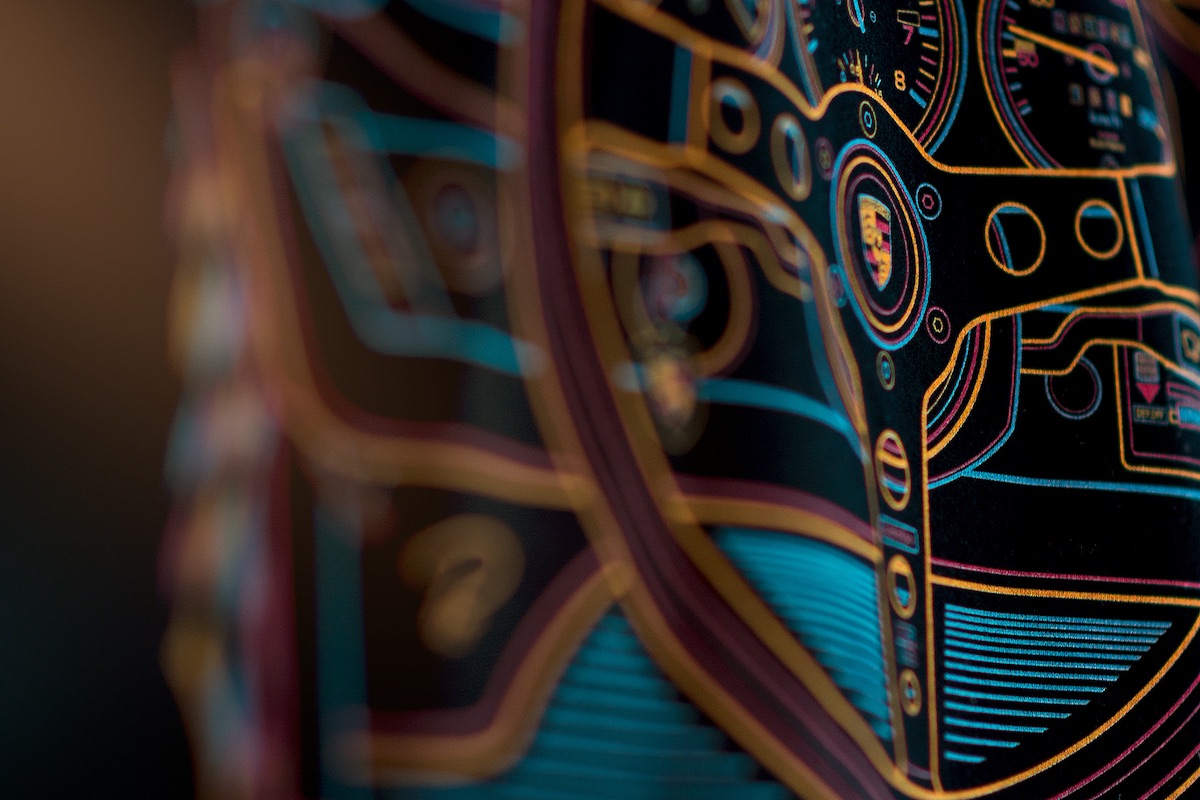 Petrol Passion founder, Erikas Bakšenskas: “When talking about the ‘80s, I picture coast-side walks in the sunset, careless love or a cruise down Miami’s palm tree-lined Ocean Drive in a Porsche 930 Targa with the wind in my hair”
© Petrol Passion

Dyler.com: Where did the inspiration for the Eighties Sunset range of designs come from?

Erikas Bakšenskas: It’s actually a direct connection to one of my favourite music genres - synthwave. Its sound correlates with the ‘80s aesthetic of bright neon colours, cassettes, digital displays - you name it!

Even though I wasn’t around then, there’s still something romantic about that period. When talking about the ‘80s, I picture coast-side walks in the sunset, careless love or a cruise down Miami’s palm tree-lined Ocean Drive in a Porsche 930 Targa with the wind in my hair. For me, it’s all about creating a feeling through the image.

When choosing cars for the Eighties Sunset range, I have two rules: one is that the car must have a cassette player, and the other is that it has to be a car that was available to everyone, - nothing fancy like the Testarossa.

One of the reasons why I say that the cars I choose for the Eighties Sunset need to have a cassette player, is because I always put the name of a synthwave song on it. I don’t know why, but this is a little bit of fun for me.

Speaking of music though, I actually did some work with Quixotic, a well-known synthwave producer. He asked me to create some Eighties Sunset-themed artwork around a DeLorean DMC-12 for his track, Palms. It has around nine million views on YouTube, so that was something very cool and very special for me! 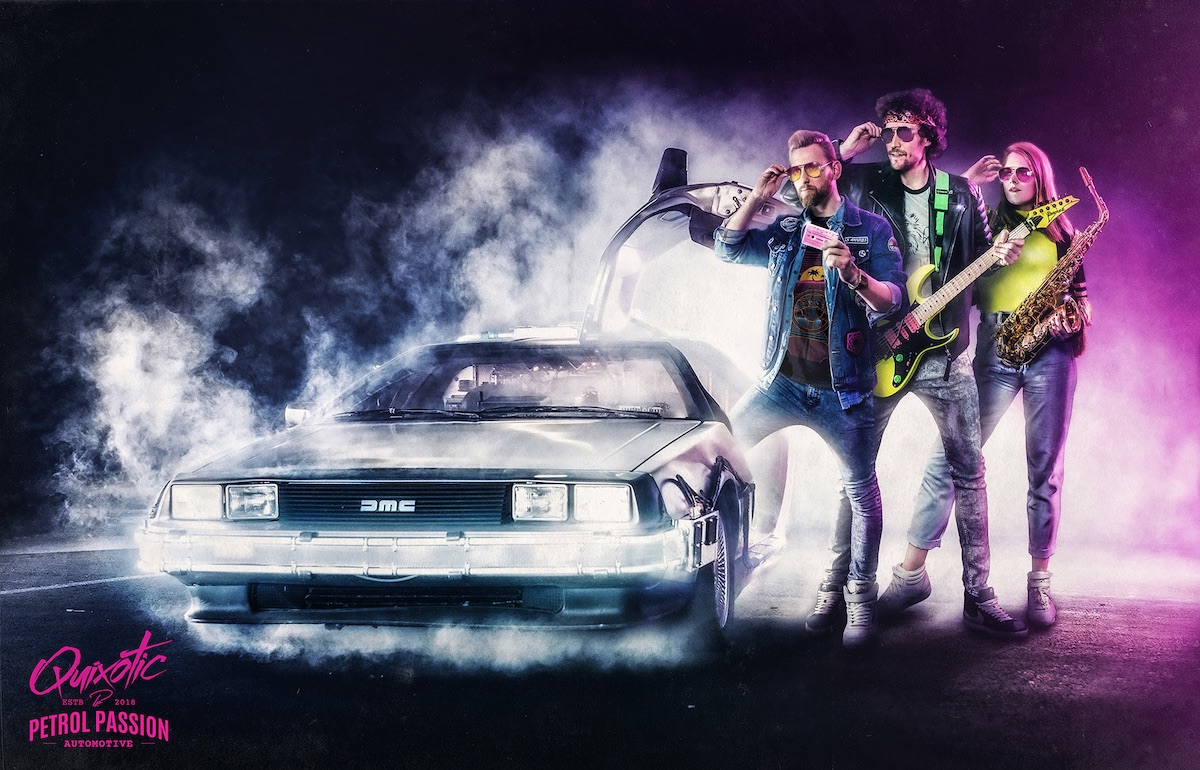 Petrol Passion was commissioned by synthwave producer Quixotic to create the artwork for his track, Palms
© Petrol Passion

Dyler.com: What connection do you see between cars and fashion?

Erikas Bakšenskas: That’s a good question! I think that just like with cars and music, there are also a lot of similarities between cars and fashion. For some people, clothing and cars are just a tool or a necessity. For others, it’s a lifestyle and a way to express themselves.

If we look at this from another angle, fashion can be used as an advertising strategy to sell cars and vice versa - for example, if you look at an ad from the luxury car world, it has a formally dressed person behind the wheel. Another thing we see here is that top-end car manufacturers are making bespoke luggage for their luxury and supercars.

Meanwhile, if we look at the classic car community it’s more laid back in terms of dress and what is considered to be a classic or not. I know that’s a very simplified answer, but I think you see what I mean.

For me though, my favourite representation of cars and fashion coming together are the designs of Rainer Buchmann. He uses a lot of bold fashion motives and scenarios to accent his obscure, yet amazing interpretations of the car. His favourite work of mine is the Volkswagen Polo Carat Paris, and without doubt, he is a great inspiration to myself and Petrol Passion. 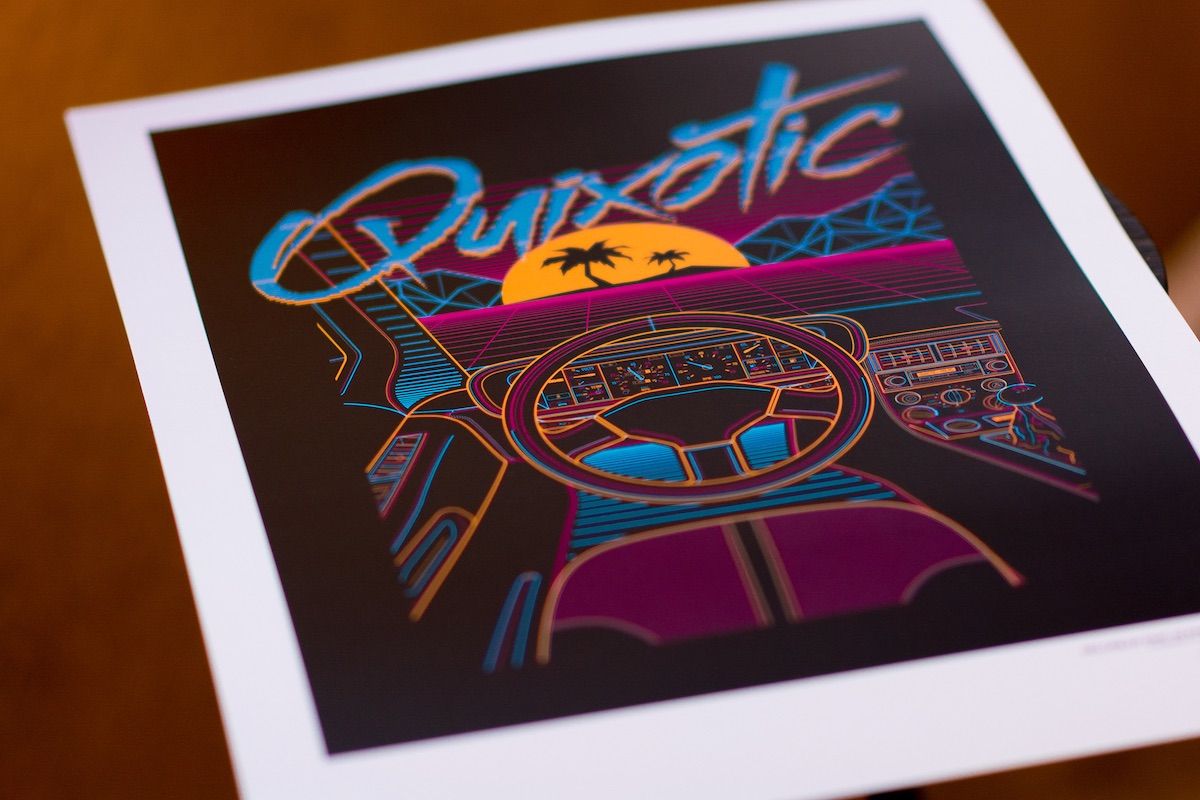 Dyler.com would like to thank Erikas for his time and for creating some properly cool designs. If you would be interested in supporting Petrol Passion, please click this link to take a look through their full range of prints and clothing.

Do you have the taste for an ‘80s classic car now? If you do, click here to check out the list of youngtimers available on Dyler.com.