The RM 50-03 McLaren F1: When Two Worlds Come Together

The traditional Swiss watch industry is facing a time of serious challenges – with the changing generations, an intense search is on to find the road to the hearts of new clients. However, radical horological experiments and models are not Swiss territory, and individual flashes of design anarchy do not attract much interest. The entire traditional watch industry and individual watchmakers operating in the Premier League segment consistently adhere to the fundamental principle of evolution, but not revolution.

In my opinion, this year's tendencies signal that one of the prevailing haute horlogerie trends will be the synthesis of classic horological material and new, highly innovative materials or ones that have never been used before in the watch industry. For those who are interested, these watches tell incredible stories – as if they were a professor at a leading technology university. The leader of this trend is Richard Mille, who is famous for making some of the most technologically advanced and expensive timepieces on the planet. It is obvious that this is the watchmaker's natural creative state, and his unique ability to combine century-old traditions with the latest technology yields stunning results. 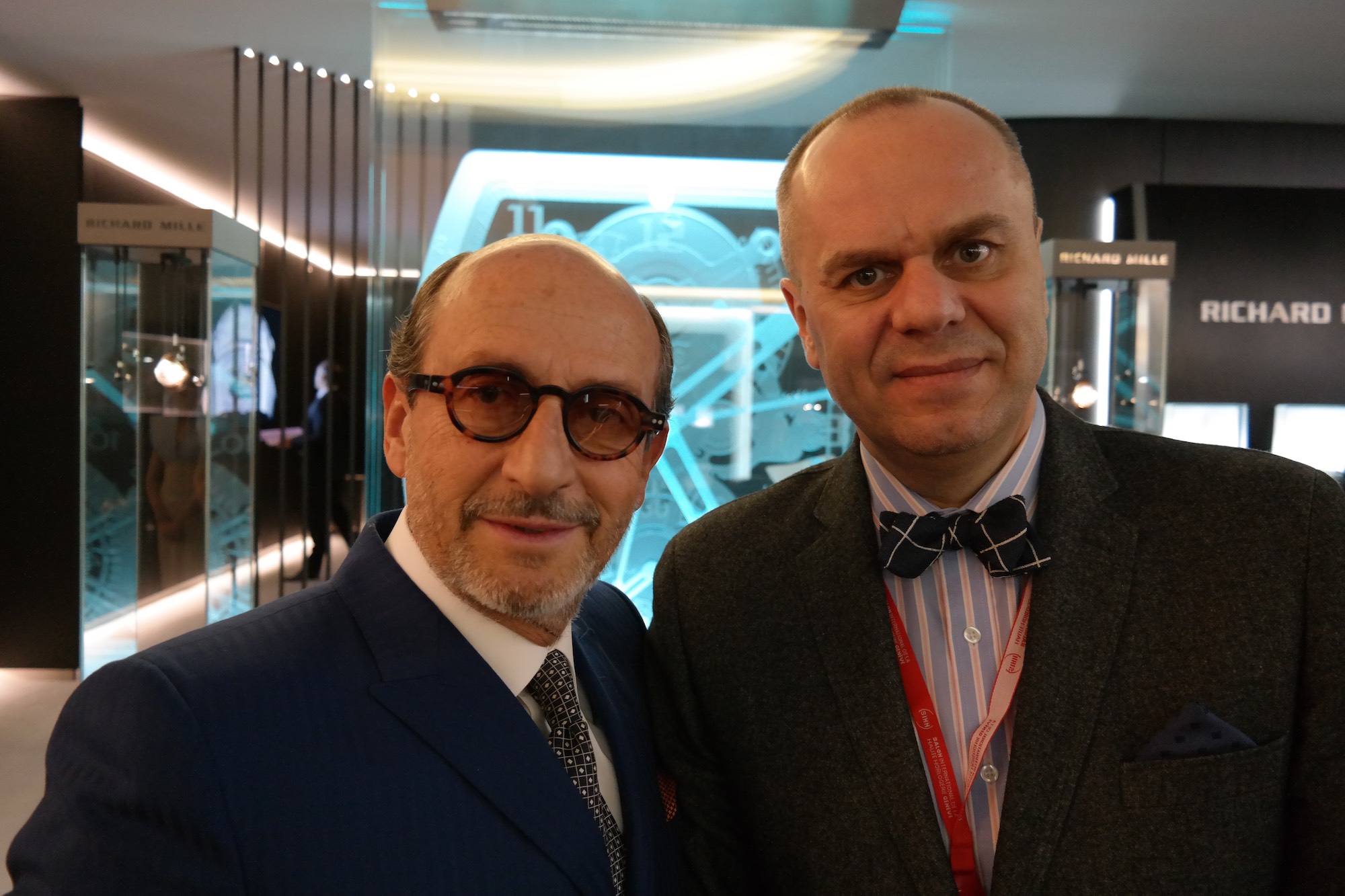 Vidas Rach (right), author of this article, together with Richard Mille (left), who is famous for making some of the most technologically advanced and expensive timepieces.
© Personal archive

Mille himself has said that he likes everything that is modern, but he lives in a castle built in 1771. After horology, his greatest passion is classic cars. He has legendary racer Bruce McLaren's first Formula One car – the M2B from 1966 – in his garage. He has received numerous offers to sell this car, but he never will since it was his dream car. Another of R. Mille's favorite cars: The Ferrari 312B that won the 1970 Italian Grand Prix and was also driven by Mario Andretti. Experts say it's worth well over 2,7 million Eur. R. Mille also owns a rare 1970s Porsche 917 and a 16-cylinder Formula One racer.

He is an avid driver himself who can be seen on various tracks behind the wheel of a classic car, so it's no wonder that Mille's name is visible at various events. One of them is the debut Nürburgring Classic Richard Mille, which took place on 17–18 June 2017 and brought together several hundred drivers. This exceptional event was also an opportunity to celebrate the 90th anniversary of this legendary track. At 20.832 kilometres long, this track involves no less than 176 turns, allowing the many spectators who turned out for this first edition of the Nürburgring Classic Richard Mille every opportunity to enjoy the smells and sounds produced by these prestigious machines. 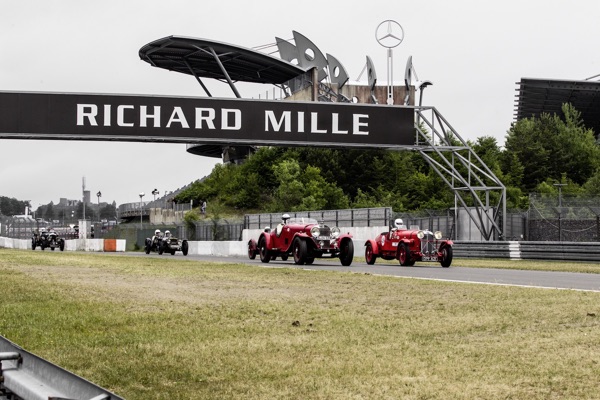 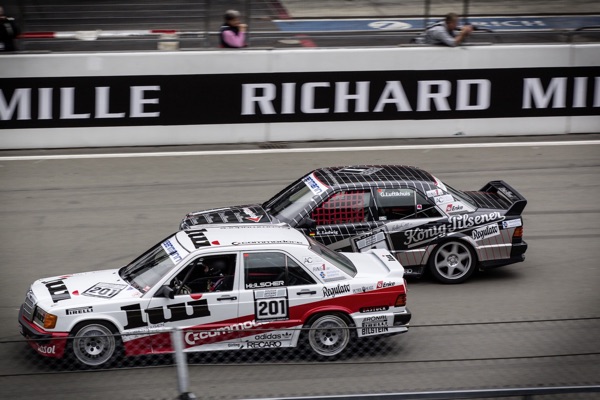 Time slots were also scheduled to allow amateur drivers looking for peak sensation a chance to drive on the north loop.
© Richard Mille

After Le Mans Classic and Chantilly Arts & Élégance Richard Mille, two international events that have become de rigueur in the world of classic automobiles, Richard Mille is pursuing a new collaboration in this area, now in Germany, a market where watchmaking and handsome mechanics are naturally associated. Second edition of the Nürburgring Classic Richard Mille to be held in June 2018. This is an unique opportunity for all passionate amateurs to revel in the golden age of automobile racing on this ultimate legend of a track. 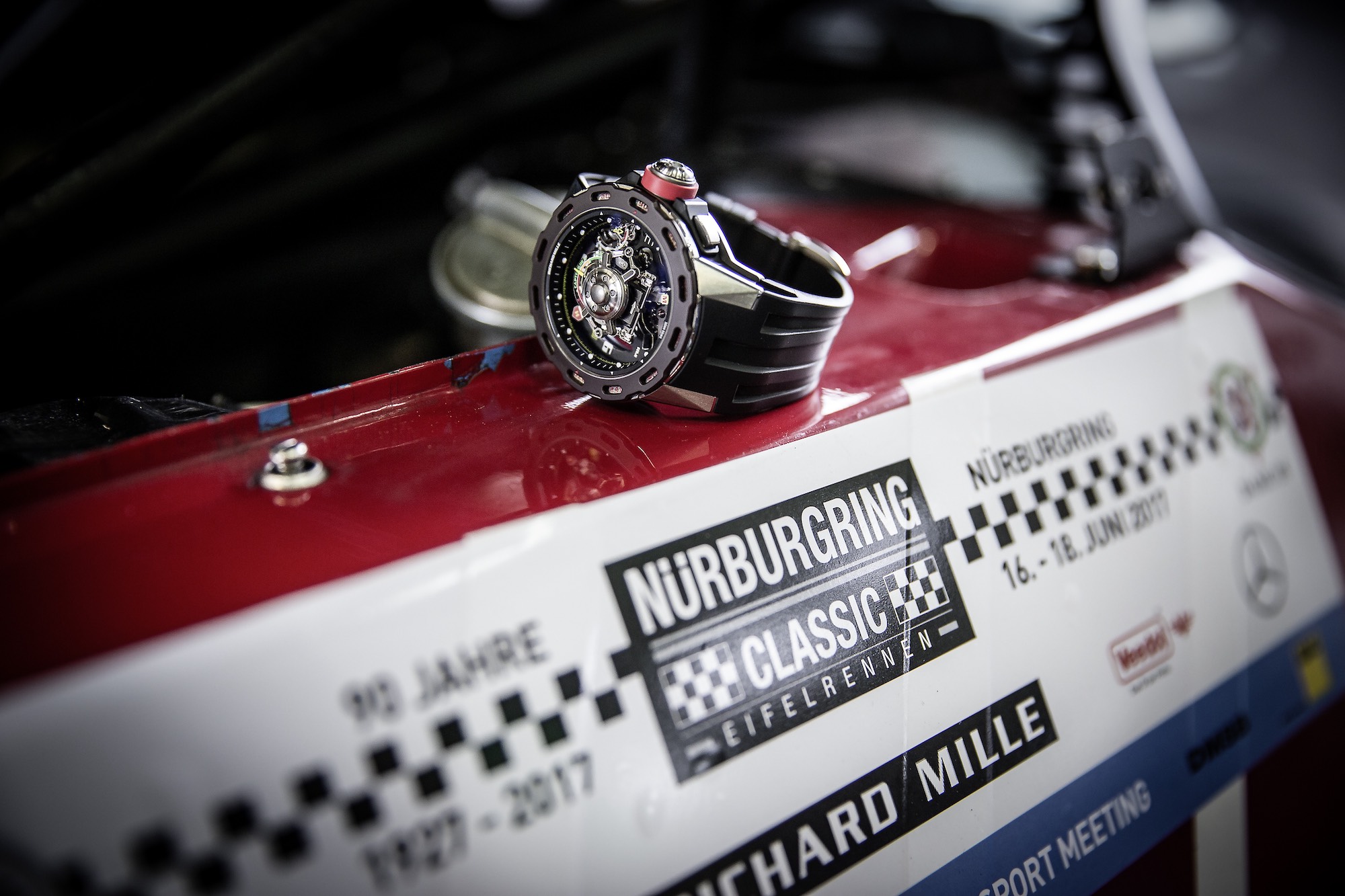 But let's get back to watches. If we talk about the "technology-ness" and prices of the latest models, then looking at the new pieces that have already been released, the hands down champion for 2017 – and I really don't think that anyone will surpass it – is Richard Mille's RM 50-03 McLaren F1. Being sold for 980,000 Swiss Francs, this piece is stunning for its complexity. And no platinum or diamonds! It's just incredible which directions this watchmaker's thoughts and ideas move in. Richard Mille has two passions in life - watches and motor sport. These two worlds come together in the conception and design of the RM 50-03 tourbillon split seconds chronograph ultralight McLaren F1. A book has been published about this watch that people interested in the most innovative materials and technologies would certainly enjoy reading, so I'll just mention a few facts and figures. With its tourbillon, split-second chronograph and strap, the entire RM 50-03 weighs just 40 grams, of which its sophisticated mechanism that consists of 600 parts is a scant 7 grams. 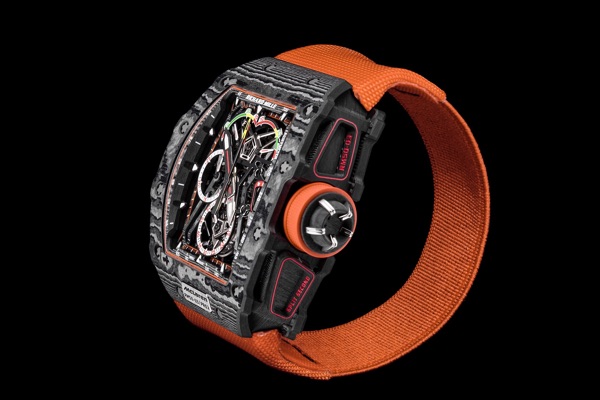 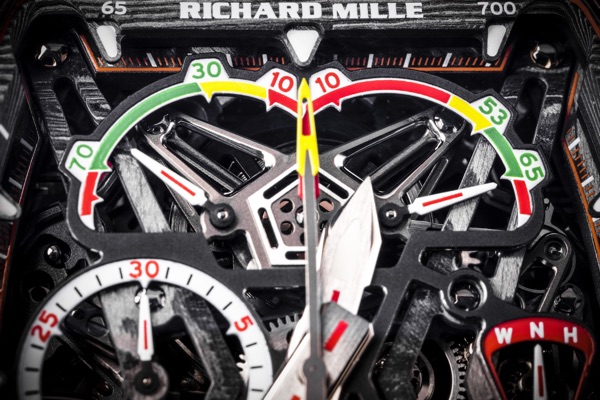 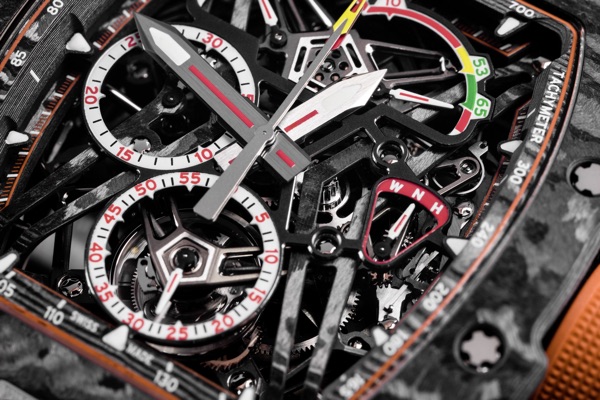 Its design uses titanium, carbon fibre and – for the first time in the watch industry – Graph TPT™, more commonly known as graphene. Some 200 times stronger than steel, this is currently the sturdiest artificial material known, but it is very specific: it is a mono-layer structure of carbon atoms which are arranged in a hexagonal lattice. Graphene is a million times thinner than a human hair; it is very lightweight and flexible, but it is impossible to create – figuratively speaking – a thicker sandwich or monolith out of its layers, because then you would get the graphite that is used in pencils. 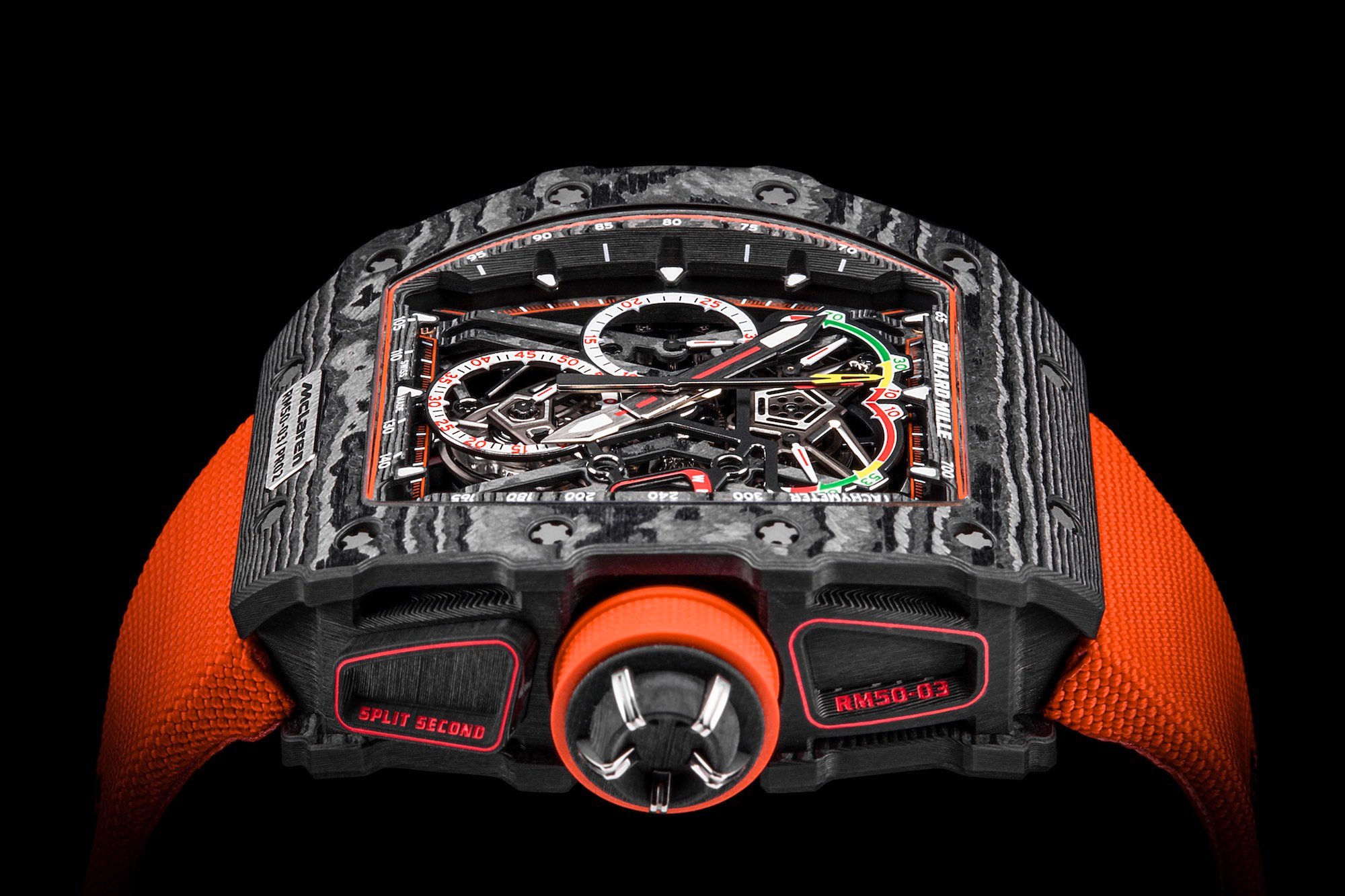 Production of the case body for the watch is unbelievably complex: it contains about 600 sheets of graphene, each with a thickness of 30 microns. In the manufacturing process, a special material is used to fuse these layers with carbon fibres. This produces a monolith, but the orientation of each graphene layer with its neighbouring carbon fibre is offset by 45 degrees. The resulting composite is then solidified by heating it to 120°C, at a pressure of six bars. The baseplate and bridges are made of grade 5 titanium (90% titanium, 6% aluminium, 4% vanadium). This combination of materials and construction makes the watch practically indestructible – laboratory tests revealed that it is capable of withstanding as much as 5,000 G-force.

And one last nugget for technology lovers: the rubber straps that BIWI S.A. makes especially for Richard Mille watches are infused with nano-material to increase their elasticity and resistance to wear.

If you want to see two interesting things, visit London's Harrods in July. For the very first time passers-by will be able to see not only the world’s lightest ever mechanical tourbillon, the RM 50-03 Tourbillon Split Seconds Chronograph Ultralight McLaren F1, but also the McLaren 570S Spider. 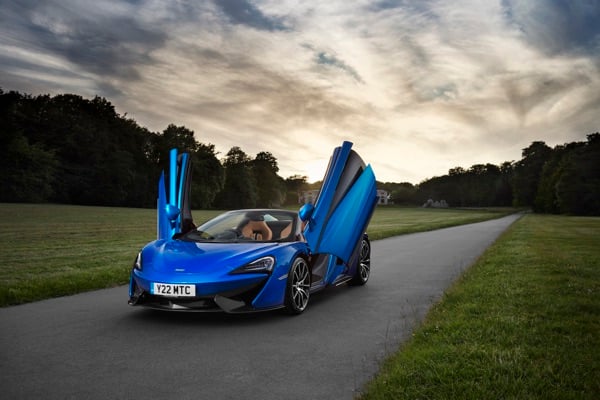 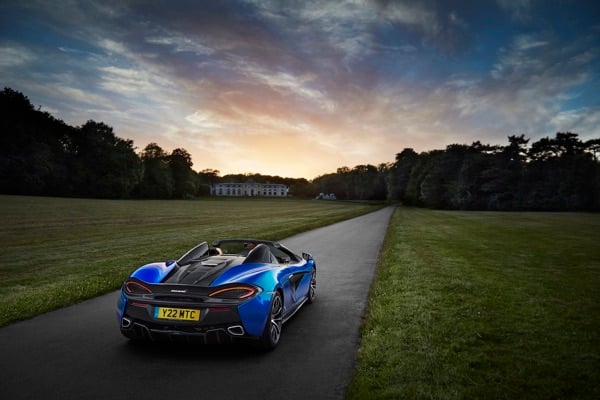 Manual winding tourbillon movement with hours, minutes, split-seconds chronograph, 30-minute totaliser, and power-reserve, torque and function indicators. Power reserve around 70 hours (±10%), displayed on a numeric scale at 11 o'clock. The baseplate and bridges in grade 5 titanium, some of the bridges of the split-seconds chronograph are made from Carbon TPT™. A latest-generation split-seconds mechanism developed by the Richard Mille engineers. The new column wheel operates the different levers of the split-seconds function and optimises the chronograph's operation. While previous Richard Mille chronographs have traditionally featured a wheel with 8 columns, the one equipping the RM 50-03 now only has 6 columns to ensure optimised simultaneous movement, maximal function locking, and greater adjustment durability.

Indicates the tension of the mainspring and makes it possible to optimise the winding of the watch. Under 53 dNmm, the spring is too slack. However, over 65 dNmm, the excessive tension could affect the operation of the mechanism, or even damage it. (These indications appear on the numeric scale to the right of the barrel).

When the crown is pulled out, the hand indicates winding, hand setting or the neutral position, similar to the gearbox on a car. A hand at 4 o'clock displays the selected mode: W (Winding) – N (Neutral) – H (Hand Setting).

The bezel and case back feature Graph TPT™, an Carbon TPT™ whose physical properties have been considerably improved by the injection of graphene, a revolutionary nanomaterial that is six times lighter than steel but 200 times more resistant. Thanks to the fruitful collaboration with The University of Manchester, McLaren Applied Technologies and North Thin Ply Technology (NTPT® Co.), Richard Mille has succeeded in producing a case machined in an improved form of Carbon TPTTM by injecting graphene. With its distinctive, wavy graphic structure, Carbon TPT™ is made up of 600 layers of parallel filaments obtained by separating out carbon fibres. These layers, each a maximum of 30 microns thick, are impregnated with a graphenecontaining resin. They are then assembled using a specific machine, which stacks the layers by varying the orientation of the fibres by 45° between two layers. The composite is then hardened in a kiln heated to 120°C with a pressure of 6 bars. McLaren Applied Technologies carried out multiple quality control and validation tests while contributing suitable solutions for producing this exclusive Richard Mille material.

The case of the RM 50-03 is water-resistant to 50 metres thanks to two Nitril O-ring seals. The case is assembled with 20 spline screws in grade 5 titanium and abrasion-resistant washers in 316L stainless steel.

In grade 5 titanium with black galvanic treatment. Sapphire crystal (1,800 Vickers) with anti-reflective treatment (on both sides).

Thanks to Richard Mille's partnership with BIWI SA, a Swiss company specialised in very-high-precision moulding of vulcanised elastomers, graphene was injected into the rubber strap of the RM 50-03 in order to improve its rubber-like behaviour and thus its resistance to wear.