Back When Fiat Multipla Wasn’t the Laughing Stock

Fiat Multipla, an MPV introduced in late 90s is universally ridiculed all over the world. The reason for it is quite straightforward – Fiat’s designers were so pre-occupied with making sure the interior of the car is bright, user friendly and spacious, they completely forgot to take care of its exterior.

The unfortunate people carrier has been compared to all sorts of creatures, ranging from a psychotic duck to Shrek the animated ogre. Even 2 decades after the model’s introduction, this automotive bullying is showing no signs of slowing down, so it is rather odd that Multipla’s forbearer, Fiat 600 Multipla from 1950s evokes completely different sentiments. It was a welcomed national hero that motorized Italy when new and is now enjoying popularity among collectors. Here’s how it got there.

In Italy, years following the WWII meant restoration and reinvention of the country and that also applied to Fiat, the main local automaker. There’s no denying the Turin-based manufacturer played its cards right when they offered the 500 and subsequent 600. The cars were brilliantly simple and affordable, a recipe that proved successful at home as well as a host of other markets. And yet there was a hitch, due to the baby boom, each Italian woman was having 2.3 children on average in 1950s. That meant a lot of families of 5+ members. If the said family owned a 600, any trip probably involved an “eeny, meeny, miny, moe” to see who goes and who stays. 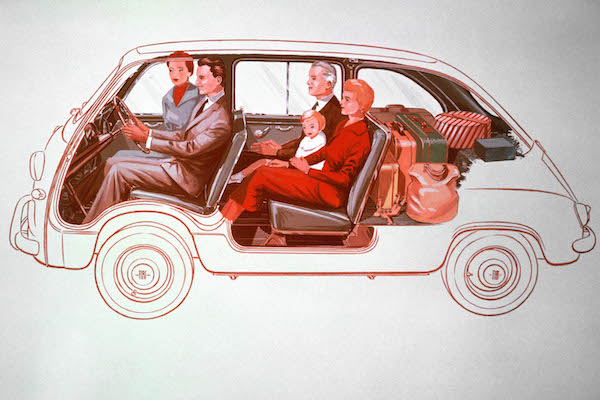 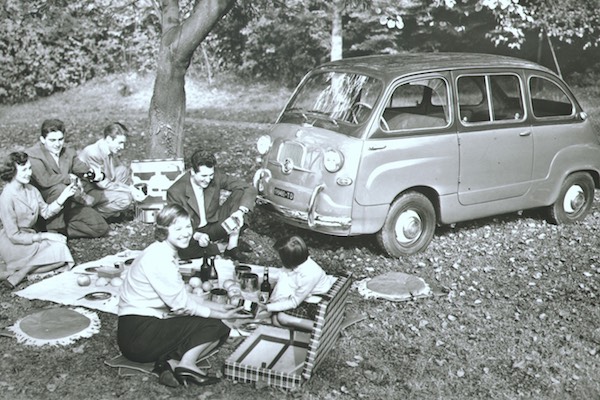 With birth rates booming, there was most certainly a need for a minivan type of vehicle
©FCA Heritage

Solution to this child neglect came in 1956, when the affordable and adorable 600 was transformed into a minivan (although it wasn’t called a minivan then) 600 Multipla. Just like with the modern day Multipla it was very much a case of form following function – the engine was tucked all the way to the back and 3 rows of seats were squeezed inside the car of only 353 cm long, full 10 centimeters shorter than a modern day Fiat Panda. Granted, it was only comfortable given the occupants weren’t too tall. Despite this space optimization exercise, 600 Multipla turned out quite dinky and it is hard not to smile when seeing one going by. Driving one is even more of an occasion – the driver is seated at the very tip of the car, over the front wheels. Think of it as piloting a microscopic bus. 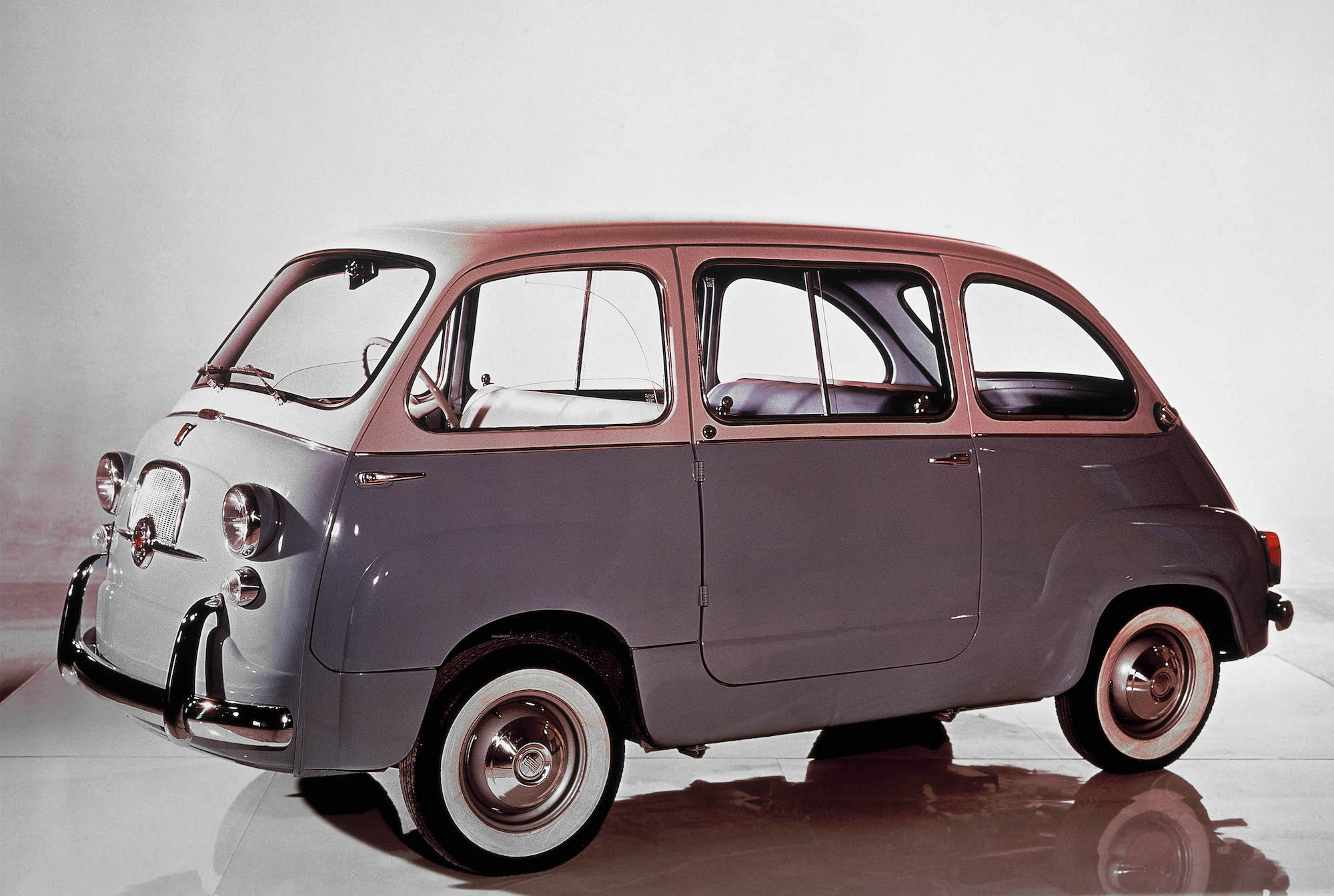 Starting out at 730,000 Italian Lira (roughly EUR 9,400 in today’s money) the Seicento Multipla was most certainly affordable, but rather ascetic in most senses. Sharing most of the mechanicals with the bare bones 600, Multipla really did provide the absolute necessary minimum – its 633cc motor squeezed out 22 BHP and the car was reported to reach a top speed of 90 km/h. The power was bumped up to 30 BHP in 1960 with the release of 767cc 600 D somewhat aiding the performance. That might not sound like much, but it did suffice in most scenarios in pre-highway world. Multipla’s production figures are the perfect proof of it – 2.7 million Multiplas rolled out the production line during the model’s 13-year lifespan. 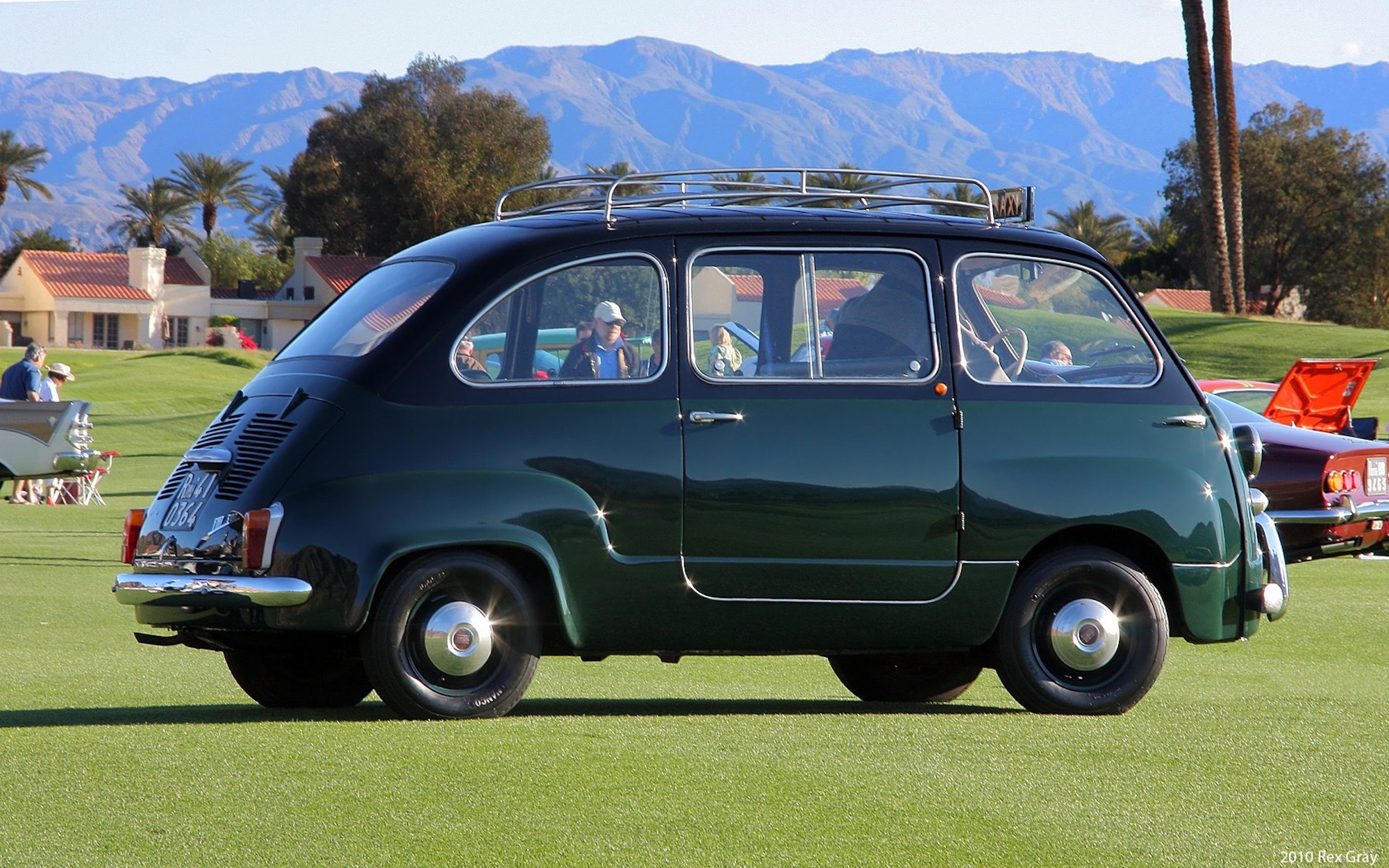 Despite certainly looking unique, the original Multipla is quite pretty
©Rex Gray, Flickr

A large portion of these did not serve as family vehicles, spacious yet compact platform lent itself for all sorts of intents. Many Multiplas were used as commercial vehicles or taxis. It was this latter role that cemented the Multipla in green and black taxi livery as a national icon across generations of Italians. According to Nigel Matthews of Hagerty, some taxi drivers weren’t content with 600’s lethargic performance and swapped in more powerful motors from Abarths or Simcas. This extra oomph most certainly helped when dealing with hectic Italian urban traffic. 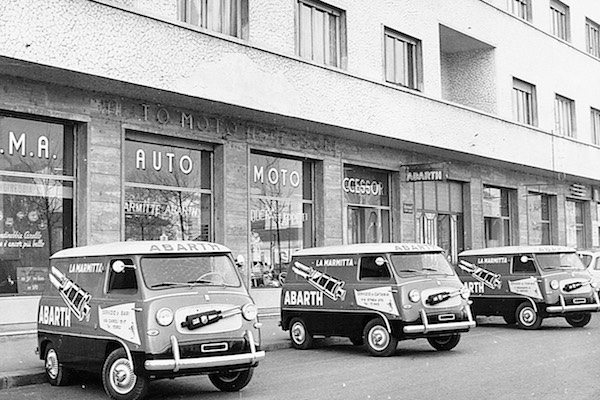 Many a Multipla served as a commercial transporter
©FCA Heritage 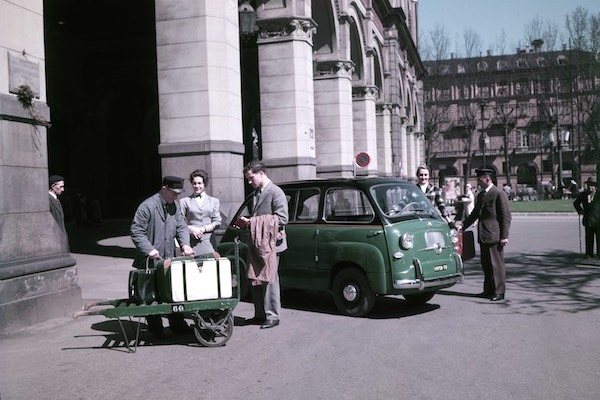 In spite of massive production numbers, not that many of Multiplas are still around. Often, they were treated as disposable transporters and run down to the ground. Due to this and a common nostalgia for the vehicle, Multiplas are much more sought after than run of the mill 600s. The situation is even worse if you are after a right hand drive 600 Multipla, as they did not sell particularly well back in the day and are now extremely few and far apart. A good LHD example can cost around EUR 40,000. Silver lining is that many of Multipla’s parts are interchangeable with the popular 600, so breakdowns are not likely to become a nightmare. Not many cars are so honestly utilitarian and yet so adorable at the same time, and that’s what makes the original Multipla so appealing.