The story of the Mercedes-Benz T 80 is a marathon for the designers and aerodynamicists: the project began in 1936, but via numerous development stages and vehicle refinements, it came to an end in 1940 – without the T 80 ever being used. In summer 2018 Mercedes-Benz Classic is presenting a unique exhibition – they mounted an authentically replicated spaceframe and a cutaway DB 603 engine on the original chassis of the legendary Mercedes-Benz T 80 record attempt vehicle. This is the first time this behemoth from 1939 can be admired by the public in this form.

The Mercedes-Benz T 80 world record project car was the brainchild of racing driver Hans Stuck: he wanted to break the absolute world land speed record. Stuck completed the project with the help of three major personalities: Wilhelm Kissel, the Chairman of the Board of Management of Daimler-Benz AG, engineer Ferdinand Porsche and air force general Ernst Udet. During the 1930s each of them made their contribution to completion of the project.

The aim of all those involved was to achieve a speed never before reached by any land vehicle. This was all the more challenging because, in that period, British drivers were establishing new records all the time at Daytona Beach and on the Bonneville Salt Flats: on 3 September 1935, Malcolm Campbell reached a speed of 484.62 km/h over the flying mile with “Blue Bird”. On 19 November 1937, George Eyston broke the 500 km/h barrier with “Thunderbolt” (502.11 km/h over the flying kilometre). And finally on 23 August 1939, John Cobb established a new record of 595.04 km/h over the flying kilometre with “Railton Special”. Accordingly, the planned target speed of 550 km/h was revised upwards, first to 600 km/h and finally even to 650 km/h.

The vehicle for the record attempt was to be designed by Ferdinand Porsche, who had left his position as Chief Engineer at Mercedes-Benz in 1928. While the other record-breaking Mercedes-Benz cars of the 1930s were built on the basis of successful Grand Prix racing cars, the T 80 was a completely new development. The Stuttgart-based company established new scales with this vehicle, not only in terms of speed, but also in terms of dimensions: no racing or record-breaking Mercedes-Benz car had ever come close to the 8,2 metres long T 80. 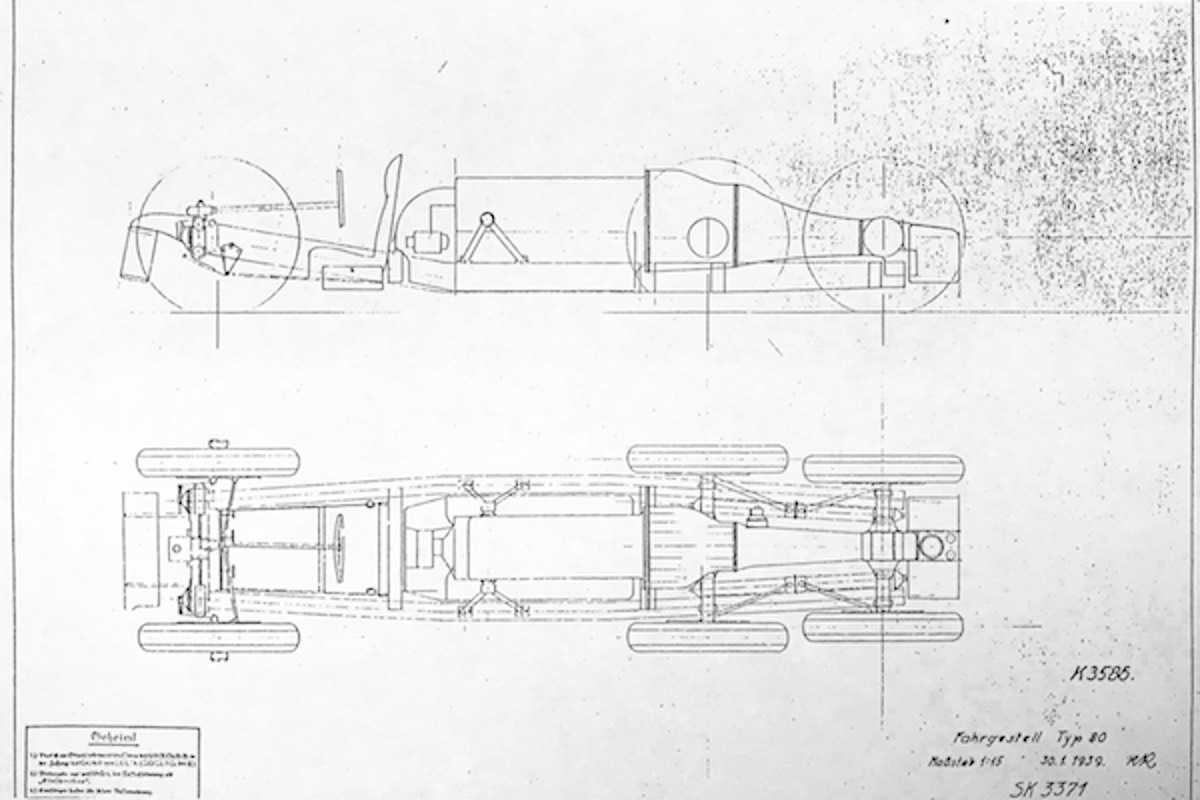 An aircraft engine for a world record

The T 80 was to be powered by the Daimler-Benz DB 603 aircraft engine. The engine was installed in a suspended position as in an aircraft. This allowed the frontal air resistance of the vehicle to be kept as low as possible. The slim, aerodynamically optimised body of the T 80 enabled it to achieve a Cd figure of 0.18.

The T 80 had a dry weight (without service fluids and driver) of just under 2,900 kilograms. This was of considerable importance: The vehicle was not even half as heavy as British record hunter John Eyston’s “Thunderbolt”.

On 6 April 1937 Porsche presented his plans for the T 80 in Untertürkheim. This latest proposal already showed most of the characteristics of the vehicle actually built: a three-axle record-breaking car powered by a centrally suspended V12 aircraft engine. Porsche calculated that for a record speed of 550 km/h after a distance of five kilometres, an engine output of at least 1,618 kW (2,200 hp) or better still 1,838 kW (2,500 hp) would be necessary. 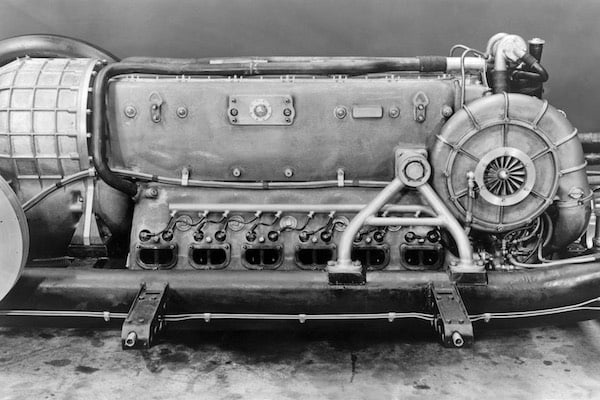 View of the DB 603 RS aircraft engine installed in the chassis. Photo from 1939.
©Mercedes PR 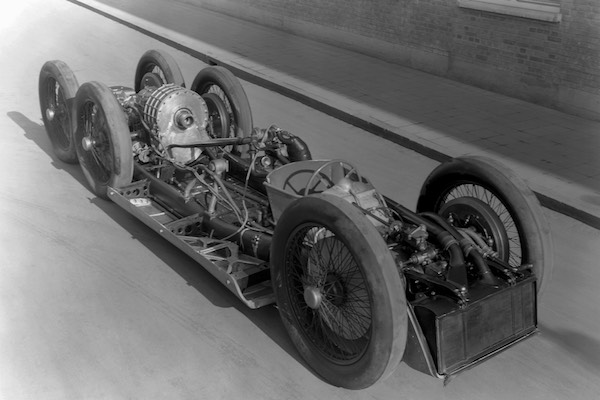 The birth of the world record car

The T 80 increasingly took shape during the course of 1938. In October Ferdinand Porsche viewed the wooden model of the bodyshell together with employees. It was now time to define the types of steel panelling for the body and produce a corresponding bill of materials, decide on the details of the seat and cockpit and formulate the tubular structure of the spaceframe. On 26 October 1938, the Mercedes-Benz racing department recorded in a test report that the first welded frame weighed 224 kilograms.

The chassis and frame were completed at the end of November 1938. The Mercedes-Benz racing department planned that the vehicle complete with all its major assemblies would be ready by the end of January 1939. 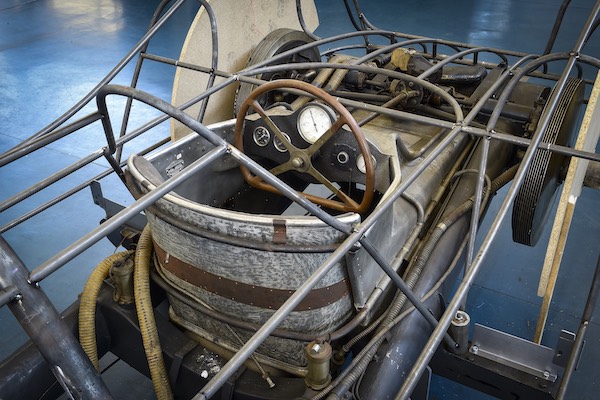 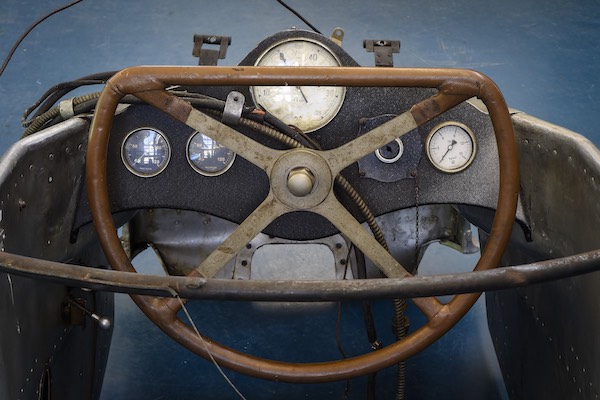 The centre instrument is the rev counter, under it from left to right are the temperature gauges for oil
©Mercedes PR

Tyre manufacturer Continental tested the wheels intended for the T 80 on a test stand, and during a high-speed test at 500 km/h in January 1939 found severe deformation of the wire-spoked wheels supplied by Hering in Ronneburg (Thuringia). In May there were still slight deformations at 480 km/h. Porsche had meanwhile calculated that a distance between 13.73 kilometres (with 2,023 kW/2,750 hp) and 11.48 kilometres (with 2,206 kW/3,000 hp) would be necessary for a record-breaking run at 600 km/h.

Testing of the T 80 was also continued after the outbreak of the Second World War on 1 September 1939. On 12 October the chassis of the world record project car was tested on the roller dynamometer, for example. In view of the new record of almost 600 km/h set by Cobb, Porsche was meanwhile envisaging a speed of up to 650 km/h for the record-breaking attempt. This would probably make an engine output of up to 2,574 kW (3,500 hp) necessary. Even this level of power seemed possible with the DB 603. 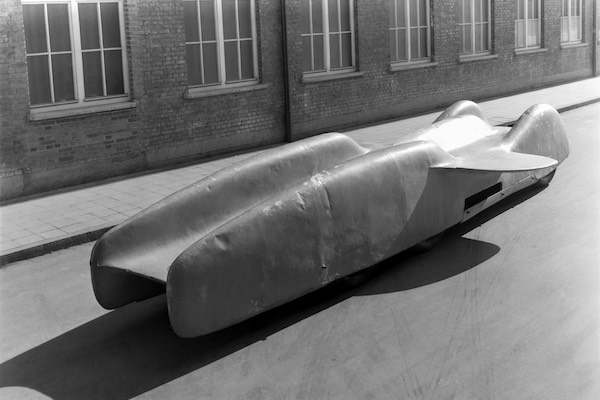 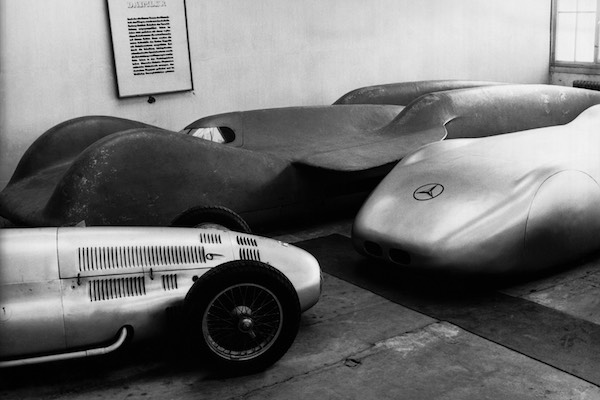 No further steps were taken towards achieving the world land speed record. As early as February 1940, Mercedes-Benz sent an enquiry to the Ministry of Aviation about a possible contribution towards the development and production costs. In June 1940 a final report was produced for the project, and the T 80 was placed in storage. The DB 603 world record project engine meanwhile installed in the vehicle was returned to the Ministry of Aviation. 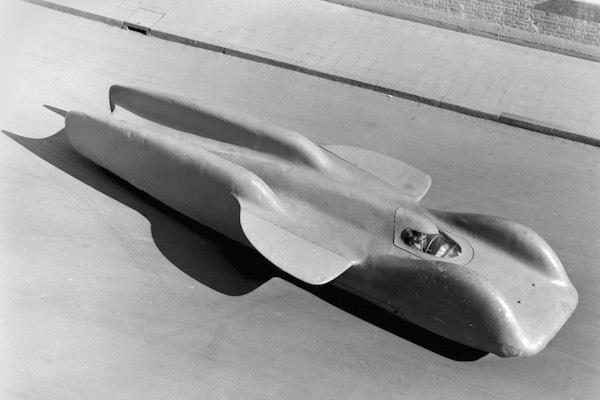 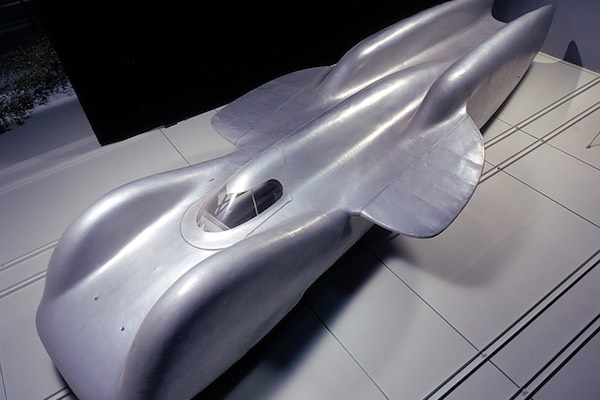 After the Second World War, Mercedes-Benz exhibited the T 80 in the company’s museum in Untertürkheim. When the museum was reorganised in 1986, the body and chassis were separated and the chassis was placed in storage. The new Mercedes-Benz Museum opened in 2006 outside the gates of the Untertürkheim plant also presented the T 80 in the permanent exhibition with its original body, spaceframe and wheels – but without the heavy chassis.

The body exhibited in the Mercedes-Benz Museum intentionally shows the world record project car with traces of the project work which was unfinished in 1940. Mercedes-Benz Classic is now juxtaposing the chassis together with the replicated spaceframe and the cutaway engine with this mighty exhibit. From mid-2018 this unique exhibit makes the technology of the T 80 immediately and impressively accessible.