It almost physically hurts for us, car enthusiasts, to see the state of Lancia today. One of the greatest car manufacturers of the world and a trailblazer of novel technologies is now reduced to building a questionable looking city cars and a rebadged Chryslers. It is as heartbreaking as seeing your favorite band of the years gone by only to put out an utterly disappointing album in the modern age. Think “The Weirdness” from the Stooges, or the “Endless River” from Pink Floyd.

In the past, Lancia had many great periods, 1960s brought us the Fulvia, the 70s featured the mighty Stratos and the 80s witnessed the Delta Integrale. But this gem I’m writing about comes from even earlier times, 1950s to be precise. Almost immediately after the war Lancia brought one of their most advanced and significant cars – the Aurelia. The car was a pinnacle of engineering, working wonders both touring and racing. Really, the only thing common between it and meek Lancias of today is the badge. 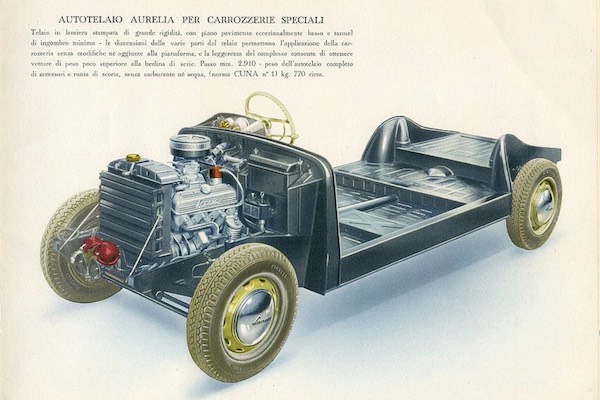 Aurelia was also marketed as a bare chassis for the coachbuilders
©LanciaAurelia.info

Among a host revolutionary features Aurelia had, its engine gets the most attention. 60 degree 1.8 l V6 was designed by Francesco De Virgilio under the great Vittorio Jano’s supervision and was the first production V6 in the world. Prior to that, it was believed the V6 configuration is inherently unbalanced and isn’t fit for a production car. Initially rather miniscule in displacement, the motor was enlarged to 2.0 and 2.5 l over the 8 years of car’s production. I’d even argue this car started the tradition of sonorous Italian V6s, think Ferrari Dino (also designed by Jano) or Alfa Romeo Busso engines. 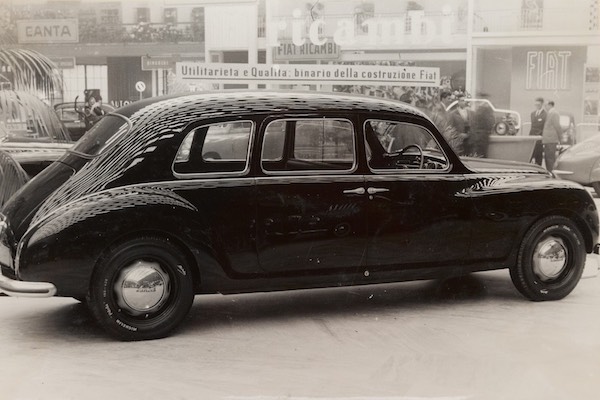 B15 6 Limousine by Bertone was the largest version of the Aurelia
©LanciaAurelia.info 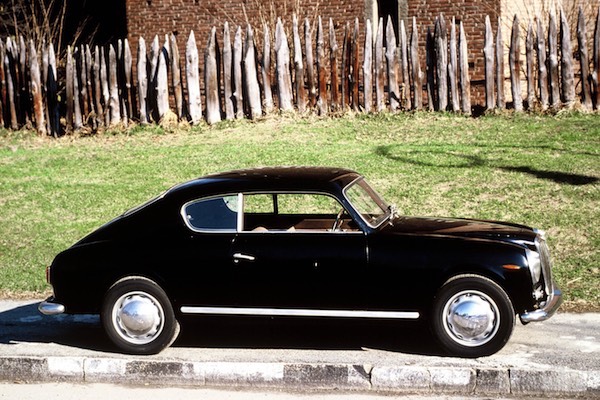 The V6 was not the only place where Jano showcased his engineering genius. The power from the said V6 was sent into a crisp-shifting rear transaxle mounted 4-speed gearbox, developed this way to aid the weight distribution by shifting the mass rearwards. Just besides the transaxle sat two inboard mounted drum brakes helping to reduce unsprung weight. The handling was also improved by four wheel independent suspension and the use of radial tires (another world’s first). 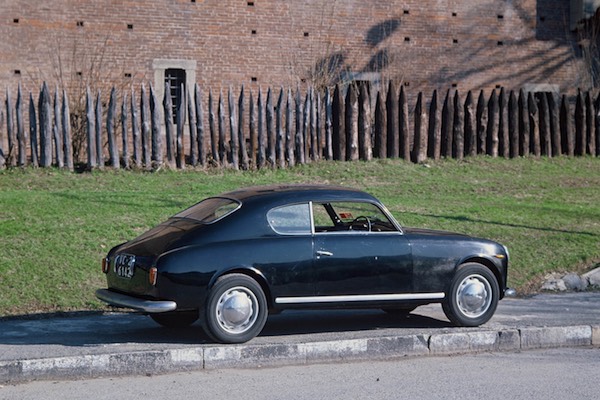 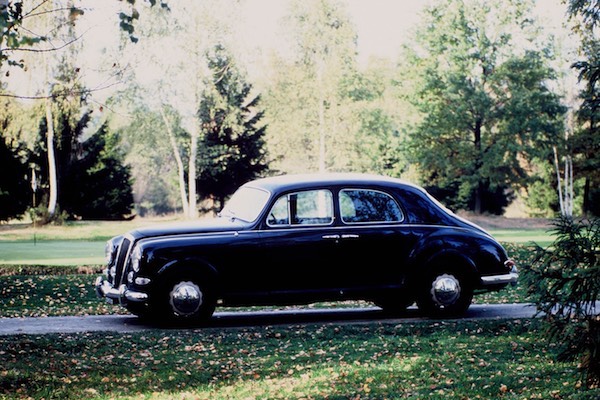 This obsessive over-engineering made Aurelia much greater than the sum of its parts. It was capable of reaching over 160 km/h (the magic 100 MPH mark), a truly impressive feat for a post-war four door saloon. All that while retaining a comfortable ride and composed handling. No expense was spared when developing the car, thus it came with a hefty price tag, exceeding USD 5,400, back when Ford’s flagship V8 Thunderbird could be had for just over USD 3,000. With less than 20 thousand of them produced, it was not a mass-production car, but those in-the-know adored it. A number of period’s best racecar drivers owned Aurelias, including the great Juan Manuel Fangio.

Albeit the Aurelia was conceived as a road car, that did not stop the racers from using them. One Aurelia finished second in its inaugural 1951 Mille Miglia, only beaten by a Ferrari with much more power on tap. It was only the beginning of an endurance racing winning streak from the Aurelia. The same it took a class win in Le Mans, as well as claiming victories to prestigious Targa Floria (1952) and Liège-Rome-Liège (1953) races. Finally, Louis Chiron (the legendary driver who now has a 420 km/h Bugatti named after him) drove an Aurelia B20 GT to a victory of the coveted victory of 1954 Monte Carlo rally. 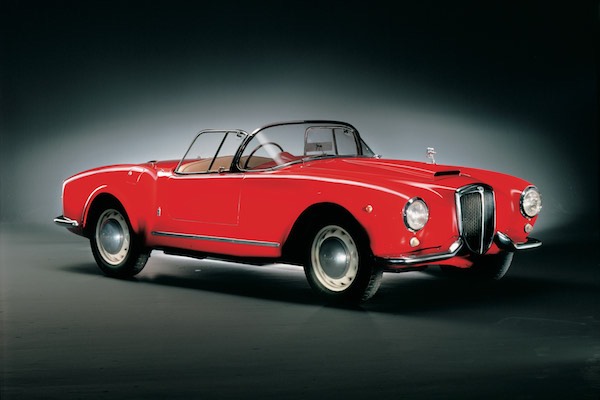 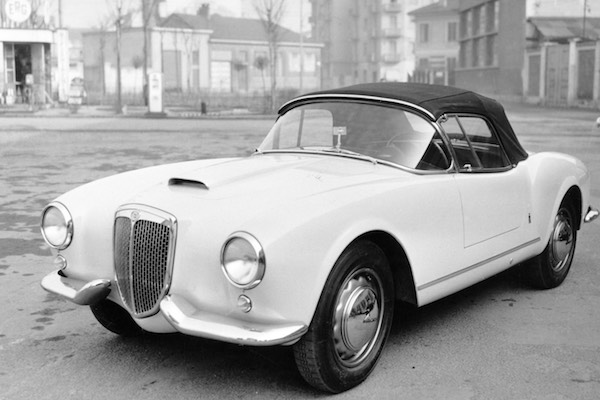 Initially, in 1950, the Aurelia could only be had as a sedan (Berlina) or naked chassis ready to receive a coachbuilt body. In a year a Coupe model was added with a convertible and a Spider following afterwards. There was also a polar opposite of the sporty Spider - Aurelia limousine built on stretched model’s wheelbase. As Aurelia was meant to lend itself to coachbuilding, its wealthy owners often opted to have their cars crafted by carrozzerie. It is estimated that around 5% (850 cars) of all Aurelias were fitted with coachbuilt bodies. Some of these bodies were long and low convertibles with flowing lines, while some were rather utilitarian estates. 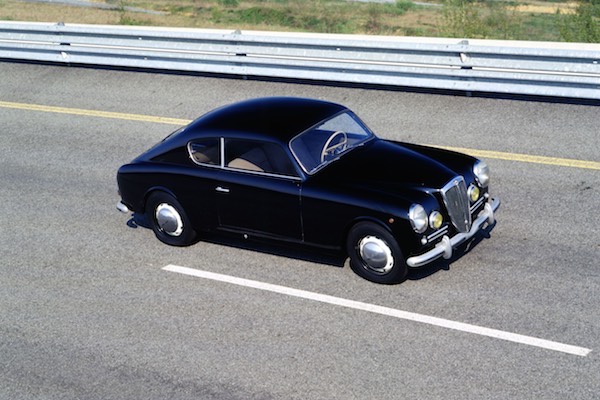 B20 GT was renowned for its racing successes
©FCA media 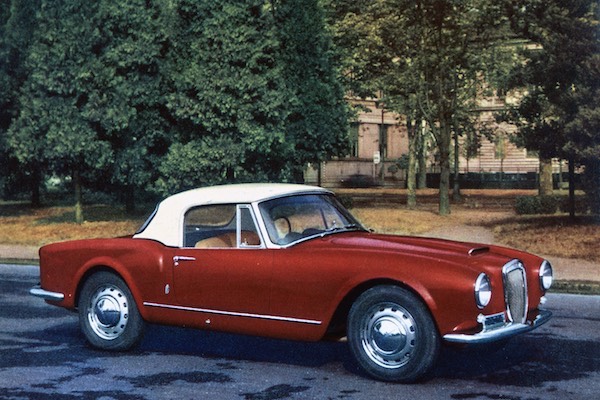 For this reason, if you are lucky enough to be shopping for an Aurelia, there is a dizzying variety of models to choose from. The most common being B24 convertibles and B20 coupes. Understandably, these cars are also the cheapest, some costing just a tad over EUR 100,000. As per usual, the more exclusive the car variant or more eventful the history, the higher the price. It is not unusual to see Aurelias go for EUR 1,500,000. This may seem like a massive pile of money, but do not forget this is one of the Lancia’s finest pieces from their period of greatness. This is Lancia’s “Dark Side of the Moon”.