A Car for the King of Style: Gianni Agnelli’s Ferrari 375 America

Undoubtedly, anyone who is even the least bit familiar with the history of the automotive industry also knows Giovanni “Gianni” Agnelli – the former head of Fiat who was one of Italy’s most influential businessmen and who controlled a significant portion of the country’s GDP. Those who took a bit more interest in this person also know that Gianni Agnelli was the epitome of style – even in a fashion capital like Italy. He managed to stand out and introduce his own style rules, which inspired the outfits of men not only from his home country, but from around the world.

He was the one who began wearing an expensive wristwatch on the sleeve of his shirt – a fashion born for practical reasons, since the watch simply did not fit under the slim cuff, that became one of the elements of his unique style.

“Everyone tried to copy him by putting the watch on top of the shirt – I did myself,” admitted famous Italian fashion Valentino Garavani in one interview. With his unbuttoned jacket sleeves, loosely knotted neck tie, and hiking boots worn with an expensive suit, Agnelli can easily be called the godfather of Italian sprezzatura. His sophistication was evident in all areas: clothing, women, and ultimately – the vehicles that he liked driving, including luxury yachts and a large collection of cars that were no less stylish than the contents of his closet and that anyone would have envied.

As befits a member of the automotive industry elite, Gianni adored cars that were exclusive, powerful and, of course, Italian. Parked in his garage was the luxurious, glamorous Ferrari 360 Speedway convertible. The three-seat Ferrari 365 P with the steering wheel in the centre. Handy when you want to have not one, but two beauties sitting next to you in your supercar. The open-top Lancia Delta Integrale Spider rally car that was built specifically for Gianni’s everyday driving needs. He particularly loved the cars that came off the conveyor at the factory that he managed – that’s how the Fiat 130 Maremma shooting brake that never made it to mass production ended up in L’Avvocato’s collection. As well as Gianni’s all-time favourite, the Fiat 125 sedan that he screeched through the streets of Turin with every day to the Fiat factory, sometimes with his personal driver planted on the back seat.

However, one of the most unique specimens in Gianni Agnelli’s rich car collection was custom-made, like most of his suits – the Ferrari 375 America, which was tailored to the very last detail for the uncrowned king of Italy by none other than Pininfarina. The cars in the Ferrari America family were exclusive grand tourers which were undoubtedly the top-end of the model range offered by the manufacturer: every single American was fitted with a gigantic V12 engine that was extremely powerful at the time, and most of them were custom made according to very specific and sophisticated customer requests. 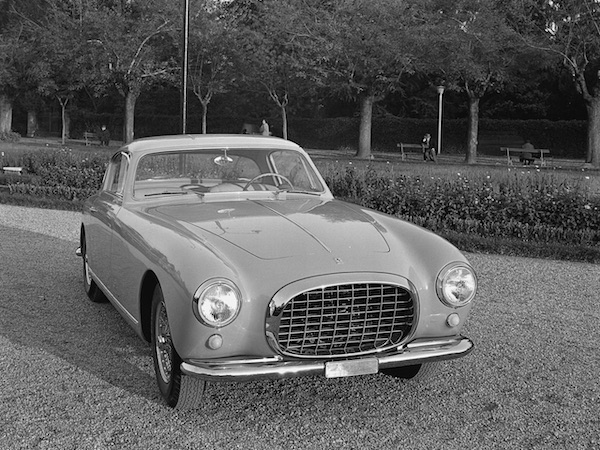 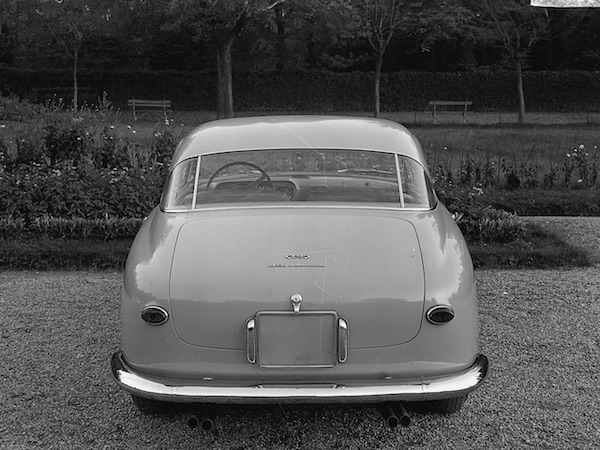 The 375 America model, which was designed as a successor to the 342 America, was introduced at the Paris Motor Show in 1953. The car that was on show was the first model, which had bodywork by Battista “Pinin” Farina, the founder of the renowned coachbuilding company himself. Under its long, massive bonnet, this car had a new 4.5-litre V12 engine designed by (and named after) Aurelio Lampredi that could produce 296 horsepower and allowed the 1,150 kg long-distance cruiser to hit 100 km/h in under seven seconds and reach a top speed of 257 km/h.

The 375s were crazy expensive and splendid beyond words, so it’s no surprise that only 12 were made. However, it’s worth noting that none of the Ferrari America models stood out for large production volumes. In any case, one of those 12 – the very last 375 America marked with the number 0355 – made its way into Gianni Agnelli’s hands. 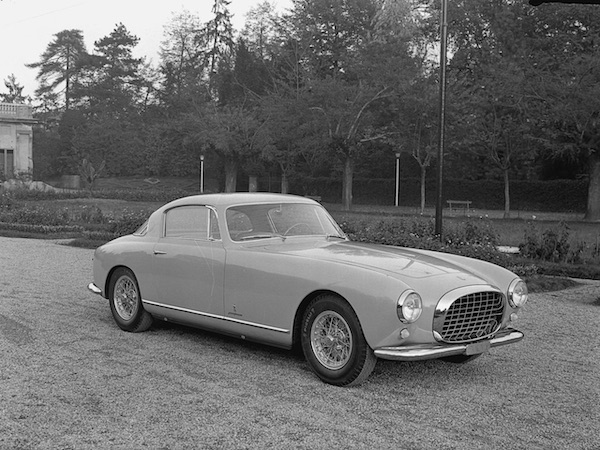 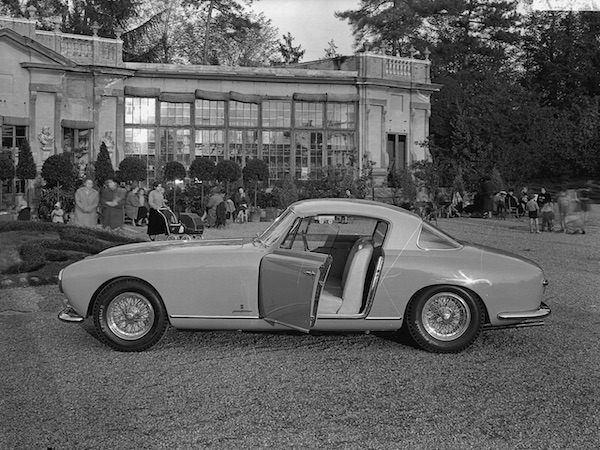 When Agnelli ordered his Ferrari 375 America in 1954. Italy was going through a time of post-war euphoria and an economic boom. So cars built at designer workshops according to buyer whims were all the thing. At the same time, Ferrari was in the early years of producing cars designed for use on public roads instead of the racing circuit, so they were happy to let the crème de la crème order these exclusive wheels.

At the time, Gianni didn’t have any other connections with Ferrari except for the fact that he had already purchased two other cars from the maker – a 166 Mille Miglia and a 212 Inter Coupé. It was most likely the Ferrari models he already had that led the president of Fiat to pick out a third car from the manufacturer that was so... unique, to put it mildly.

According to the original design, the 375 America wasn’t supposed to differ much from the philosophy of the 250 model – an oval front grille, round headlights, conservative lines and plump wings – but Agnelli imagined a completely different car. One that at first glance didn’t even look like a Ferrari and broke from the manufacturer’s old traditions. Nevertheless, he gave the designers and engineers total creative freedom, handing them a blank piece of paper and simply saying that he wanted something special. The still-fresh Ferrari and Pininfarina duet wanted to impress both one another and Gianni Agnelli, and spared no time or effort in designing the special order and refining it down to the tiniest detail. From what we see, it’s safe to say that the result really was stunning – the last model in the 375 series was indeed made to impress. 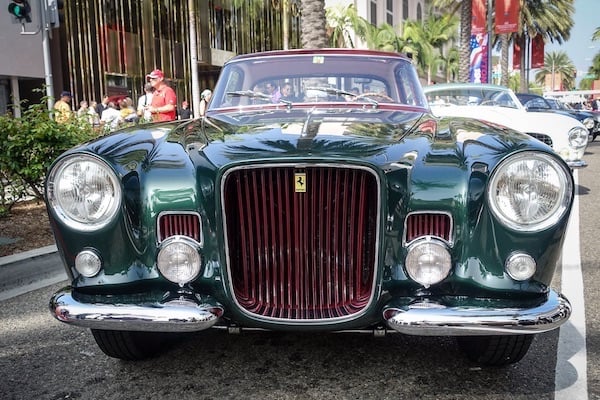 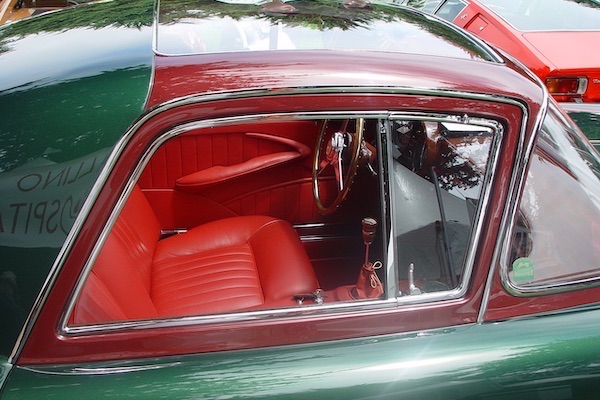 First of all, this exclusive car was powered not by the standard 4.5-litre V12 engine, but rather, by a 4.9-litre Lampredi V12 manual engine – the Agnelli 375, as this one-off was also called, became the first Ferrari with this kind of capacity and power to hit the roads – and three Weber carburettors were added to keep it company. In order to accommodate the non-standard drum brakes, the car was given 16-inch wheels with a multitude of fine spokes hand-crafted by Borrani in Milan. Just to make it nicer and even more special, some of the suspension components were chromed. After all, the car was for Gianni Agnelli...

He did have some very specific requirements for his new Ferrari 375 America: the car had to be painted in Verde Scuro dark green, it had to have a two-tone roof, and the rooftop had to be transparent, but not a sunroof. The interior of the car went with the roof painted in dark green and ruby red. The dark red Bordeaux leather that was used for the seats, the doors, and the centre console. The floor was covered with a carpeting of the same colour. The dashboard was made of artificial wood with a red hue that looked very natural.

It was also important for the president of Fiat to have a rear window that went down and a specially shaped gear shift made of real wood. Nevertheless, one of his most important and unique requests was a special eight-day clock by British Jaeger, which produced speedometers, tachometers, and other dashboard instruments. Its operating mechanism was also a bit unconventional. The seconds and minute timing ticked in the opposite direction than on regular clocks. 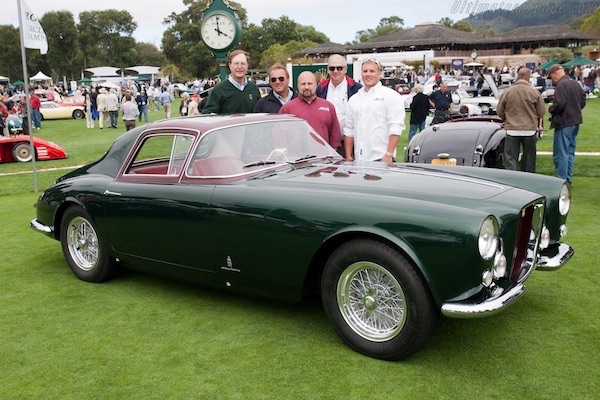 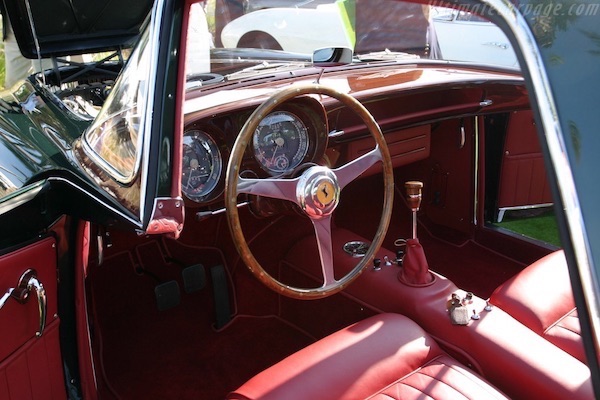 The final result of the collaboration between Ferrari and Pininfarina was presented in April 1955 at the Turin Motor Show before being handed over to its new owner. True, Gianni Agnelli only drove his custom-made Ferrari 375 America for a short time, selling this unique car in 1959.

Of course, he could have held on to it for another decade – until 1969. That’s when Fiat took a controlling stake in Ferrari, so maybe he would have decided to keep the 375 America. However, by selling what was perhaps the best and definitely one of the most exclusive grand tourers Ferrari ever made, he gave many people the opportunity to experience what it means to drive like Gianni Agnelli.

Of course, by the time the car got into the hands of restorers in 1990 after years of moving from one garage to another, it had already suffered significant cosmetic damage. After being brought back to life. The Pininfarina masterpiece won the Ferrari Grand Touring competition at the Pebble Beach Concours d'Elegance in 2003 with a perfect score, something that only five other Ferraris have ever done. This achievement is not at all surprising – after all, this car was built to amaze Italian industrial giant Gianni Agnelli, so even the passing decades couldn’t take away what made the 12th 375 America so special – the impeccable craftsmanship of the people who created it, the incredible attention to detail, and the unique design that broke from Ferrari traditions.