Chevrolet Corvair was the Most Atypical Detroit Sedan

The 1950s marked a significant shift in American automotive lifestyle as some drivers exchanged their lavish land yachts for something smaller, more economical and most likely European. To a large extent, it was the brilliant VW Beetle ad campaign which catalyzed these ideas in the American drivers’ minds. With the demand for compacts increasing, Detroit giants scrambled to enter the lucrative segment. Ford and Chrysler took the easy way, just scaling down their full-size sedans and introducing the Ford Falcon and Plymouth Valiant, respectively. It was a safe and rational approach that probably made the stakeholders very happy. GM did not follow suit though and tried to do better. That was because Ed Cole, an innovative engineer and enthusiast, was at its helm.

For those unfamiliar, Ed Cole was a through and through petrolhead responsible for developing Chevy’s timeless small block V8 and injecting some sportiness into the Corvette. Cole was an ambitious car geek and risk taker, so when GM set out to develop a compact car, he turned to European automakers for inspiration. At the time, VW, Fiat, and Renault have been putting motors in the back of their vehicles. This sort of packaging was a no-brainer for a compact car as it granted more interior space and simpler construction. Cole also insisted on making the powerplant air-cooled, doing away with the complexities of the usual cooling system and reducing car’s mass. The new project was named Corvair by combining names Corvette and Bel Air. 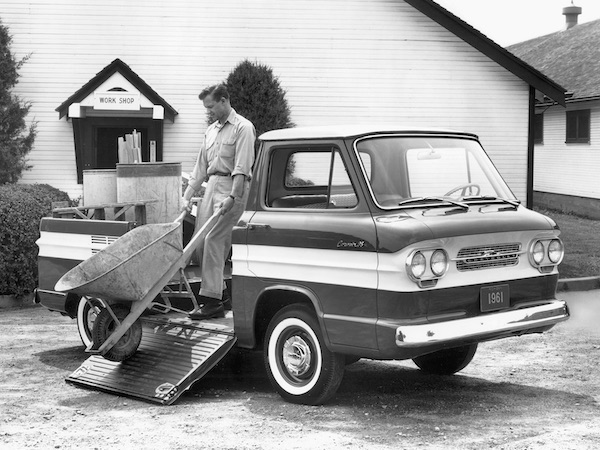 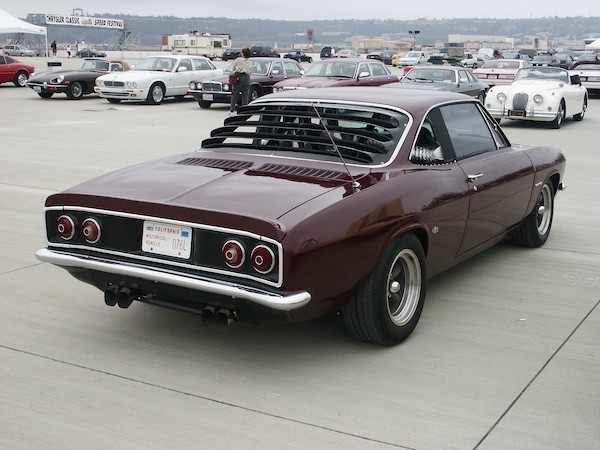 As it is America we’re talking about, where everything is naturally bigger, even compact cars. The Corvair span for 4.5 meters and was propelled by a six-cylinder engine in boxer formation. Even though the last detail was really Porsche-esque, most Corvairs did not really have the same get-up-and-go. With an exception of the Spyder version which had forced induction with the help of a turbocharger. Although an unusual solution at the time, it boosted the power output to 150 bhp making the lightweight car quite spritely. It made Corvair perhaps the most atypical American car to come from the Big Three in a long time. In 1960 GM presented a whole range of Corvair models, ranging from the coupe and a roadster to a pick-up truck and a van. 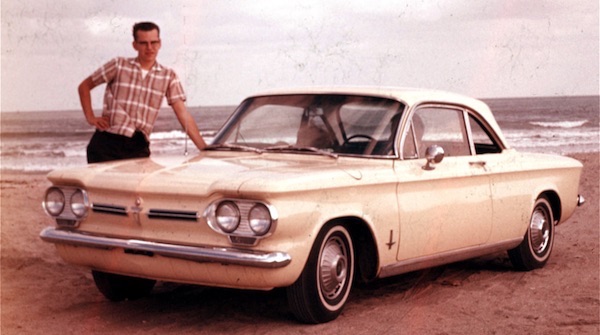 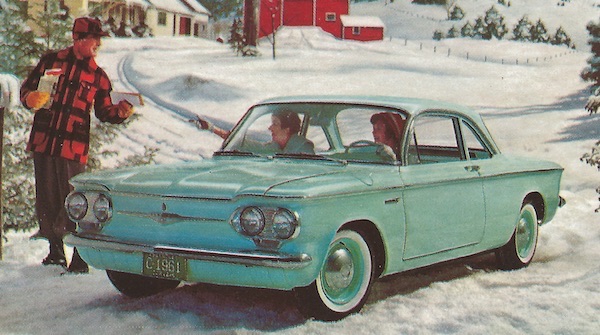 Corvair also looked unlike any other American before or since. Engine repositioning prompted sleek grill-less fascia, with simple theme carrying on throughout the car. Unusual for an American car from the era, there were no fins or excessive chrome details, it looked simple yet elegant. Car and Driver even lauded the second-gen Corvair coupe as the most beautiful post-war American car. 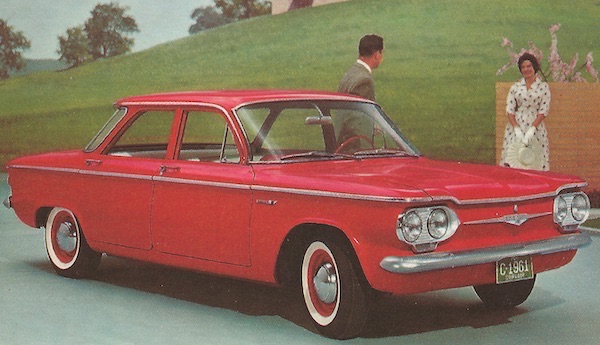 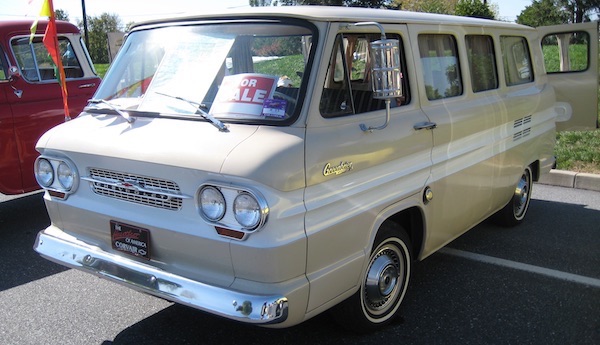 The novel design did not come without its challenges. Due to its rear-biased weight distribution and rudimentary swing axle rear suspension, the Corvair was prone to oversteer. From the factory, the tendency was simply remedied by decreasing the tire pressure up front, this way balancing the car’s handling. However, many inexperienced technicians and drivers overinflated the front tires, leading to dangerous handling characteristics and landing GM in some hot water. When consumer activist Ralph Nader wrote his book “Unsafe at Any Speed”, attacking the automotive industry’s careless approach to vehicle safety, the first chapter was dedicated to Corvair, staining the model’s reputation forever. A later investigation by Texas A&M University concluded that Corvair was not any more dangerous than a typical car from the period, but the damage was irreversible. Interestingly, the unusual car’s layout found fans in the racing community, with American racing heroes like Don Yenko and John Fitch developing Corvairs into competitive race cars. 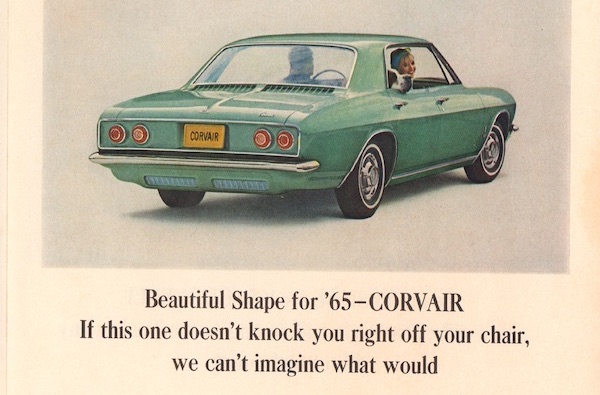 Chevrolet were well aware that the Corvair was quite a looker
© SenseiAlan, Flickr 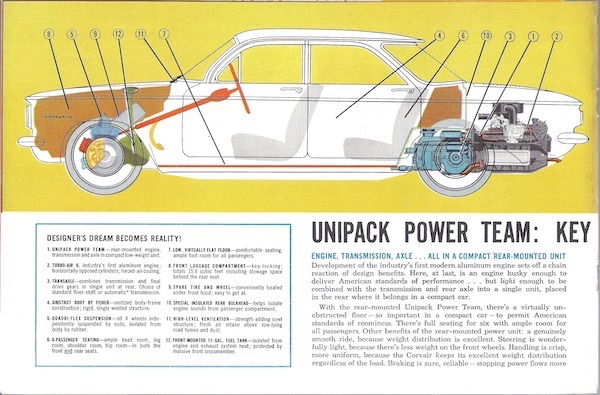 Still, the Corvair remained a marmite type of a car, with the people firmly divided into its lovers or skeptics. Corvairs as they hoped and a more traditional Chevrolet Nova eventually replaced the model. These days, the odd and sporty American compact has a cult following, and it is easy to see why. There is nothing else quite like it. 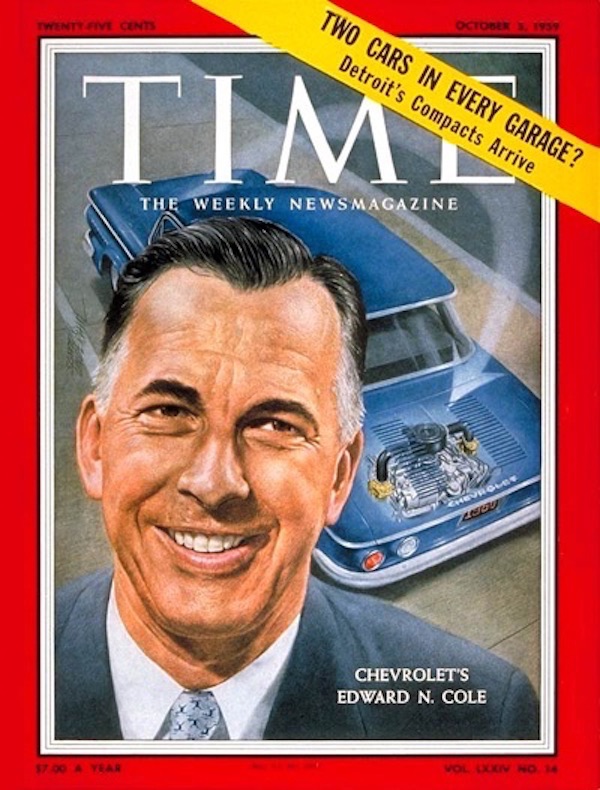