Who was the First to Travel the World by Car?

At the end of the 19th century, when the first cars came into existence, the society got into a peculiar euphoria. It seemed like there is nothing impossible. Something that a day ago sounded like fantasy was now a reality. For the first time, the concept by Jules Verne presented in a book called "Around the World in Eighty Days" came close to the truth.

The idea to offer the bravest ones to travel the world in a car was born at the news outlet Le Matin in France. Journalists were always looking for sensational news, so as soon as everybody heard about it, the French got a lot of support from the US media giant New York Times. Meanwhile, a Berlin newspaper BZ am Mittag even brought themselves to cover the car expenses with an intention to send one of their reporters together with a driver.

The initial idea was formulated as "1908 New York to Paris Race". The racing route was projected to go across the US, then through Alaska over Bering Strait to Asia. After that, the route would continue through Siberia and the European part of the Russian Empire until the city of Konigsberg, and then - Paris. The length of the planned route was 20,930 kilometres, but the actual driven distance was lower. 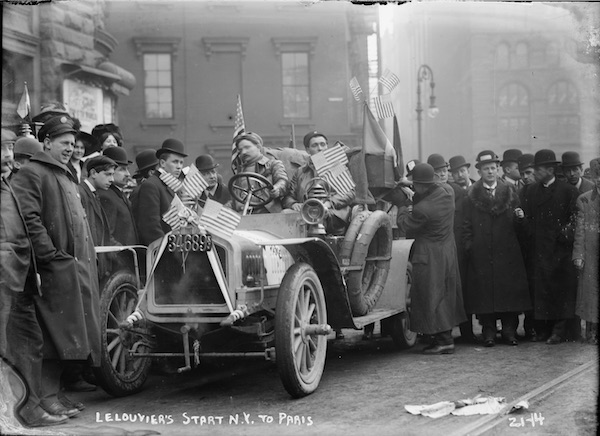 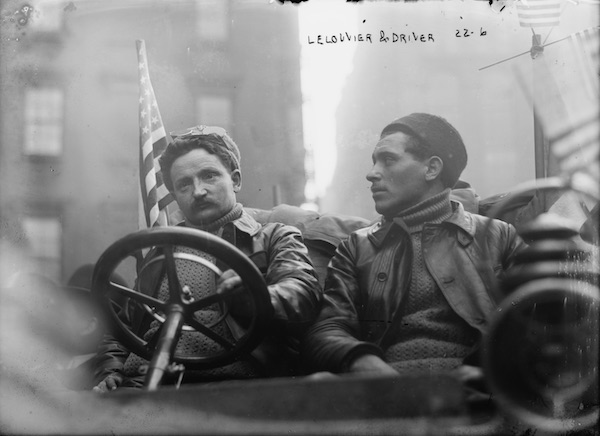 On February 12, 1908, almost three hundred cars - nearly all of the lightweight vehicles from New York's parking lot - escorted six teams representing four countries to a journey around the world. It was the powerful American Thomas Flier with 70 HP driven by George Schuster, Italian Zust, three Frech cars (De Dion-Bouton, Motobloc and Sizaire-Naudin), and one German Protos. 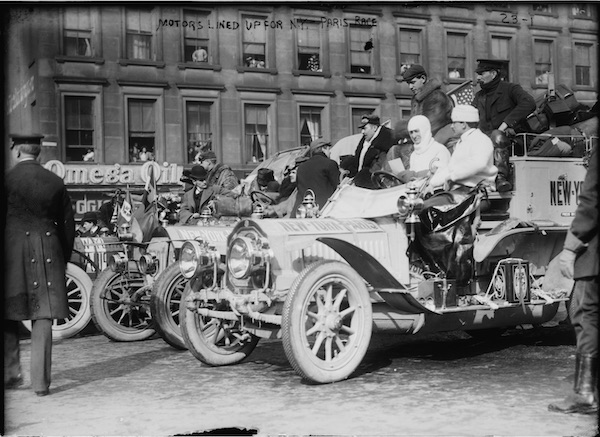 Shown in front is the De Dion-Bouton; next to it the German Protos
© Wikimedia Commons 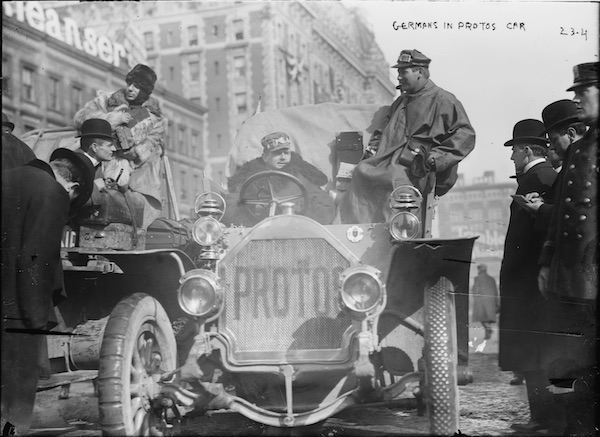 Grid before the 1908 New York to Paris Race
© Wikimedia Commons

The latter, which was driven by the army lieutenant Hans Koeppen, had 40 HP engine and a special open body made by a company named Josef Neuss. The Proto chassis weighed 1100 kg, while with luggage and 800 litres of gasoline it weighed 2.7 tons. As you can see, it was not a lightweight car and more like a truck. But it was not a blind choice.

Teams were carrying not only fuel but spare parts, tires and food supplies. The adventure ahead of them was more difficult than Dakar rally even if driving through highly populated regions. Racers were soon convinced of this when they got stuck in the dirt road cracks just 20 miles from New York. 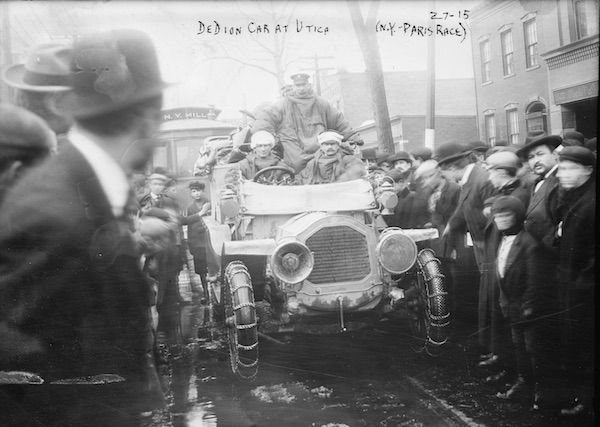 Twelve days later, Thomas Flyer was leading the way. He was one and a half days ahead of De Dion-Bouton, who was second. While Zust was just a few hours behind Dion-Bouton, Protos and Motobloc fought through the snow and lost three days. The sixth team Sizaire-Naudin had to stop due to technical problems. It certainly was a hellish road.

After frost and snow on the east coast of America, racers had to overcome the heat and sand of the Nevada desert. The first to cross America and reach San Francisco, Thomas Flyer's crew was already rolling along the Pacific coast north toward Alaska. However, the route had to be changed as the melting snow barricaded the way. So, the leading crew made their way back to Seattle, where a steamboat was expected to take them to Yokohama in Japan. That was the organizers' decision, who were afraid that the journey around the world would end before it began. And for a good reason - only three racers remained.

From Japan, the cars were again transported to the mainland and unloaded in Vladivostok. At the moment, an interesting situation arose. The referees gave 15 days to Thomas Flyer crew that drove the furthest distance towards Alaska. Meanwhile, a Proto crew that was trapped in the middle of the US, and then took the train from Idaho to Seattle to onboard the ship on time, has been punished with 15 "fine days". Only the Zust crew was rated realistically.

Three now evaluated teams continued their journey from Vladivostok to west. The only possible route was via the Trans-Siberian Railway highway. By the way, H. Koeppen from Protos had to drive alone along the embankment across Russia. Both his mechanic and the journalist that came along got either sick or too tired to continue, so they stayed in Vladivostok.

An American-driven Thomas Flyer got stuck in Tomsk when the main gear broke down, which took four days to repair. So the first Protos of 1907, driven by H. Koeppen, On June 22, 2000, successfully crossed the western border of the Russian Empire and East Prussia. Nearing the finish line, cars that endured long journeys were often damaged, but repairs in Europe were done fairly quickly.

On July 26, Koeppen finished in Paris at the door of the Le Matin editorial office. Four days later, G. Schuster finished with Thomas Flyer on July 30. As Koeppen received a 30-day penalty for several failures, Schuster was declared the winner of this trip. He covered a distance of 16,700 km. The Italian Zust finished in September 1908. 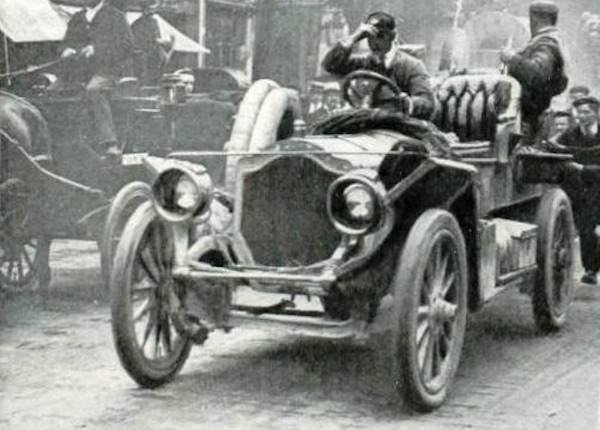 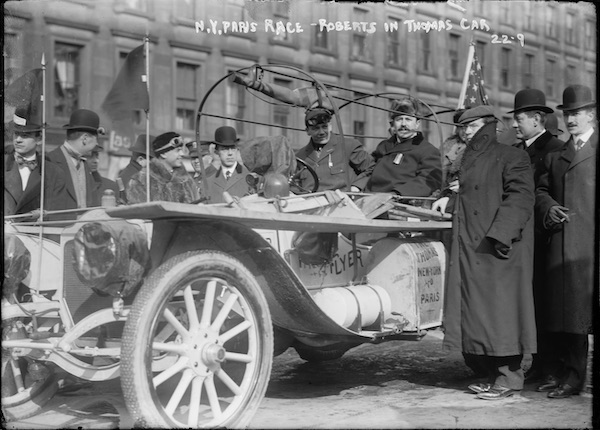 The winners' car was transported by ship to America, where it is still kept in the National Automobile Museum. The victory sufficed as a great advertisement. That is why the same year, Thomas Flyer managed to sell 1,000 vehicles of the same DX model with 70 HP engine. 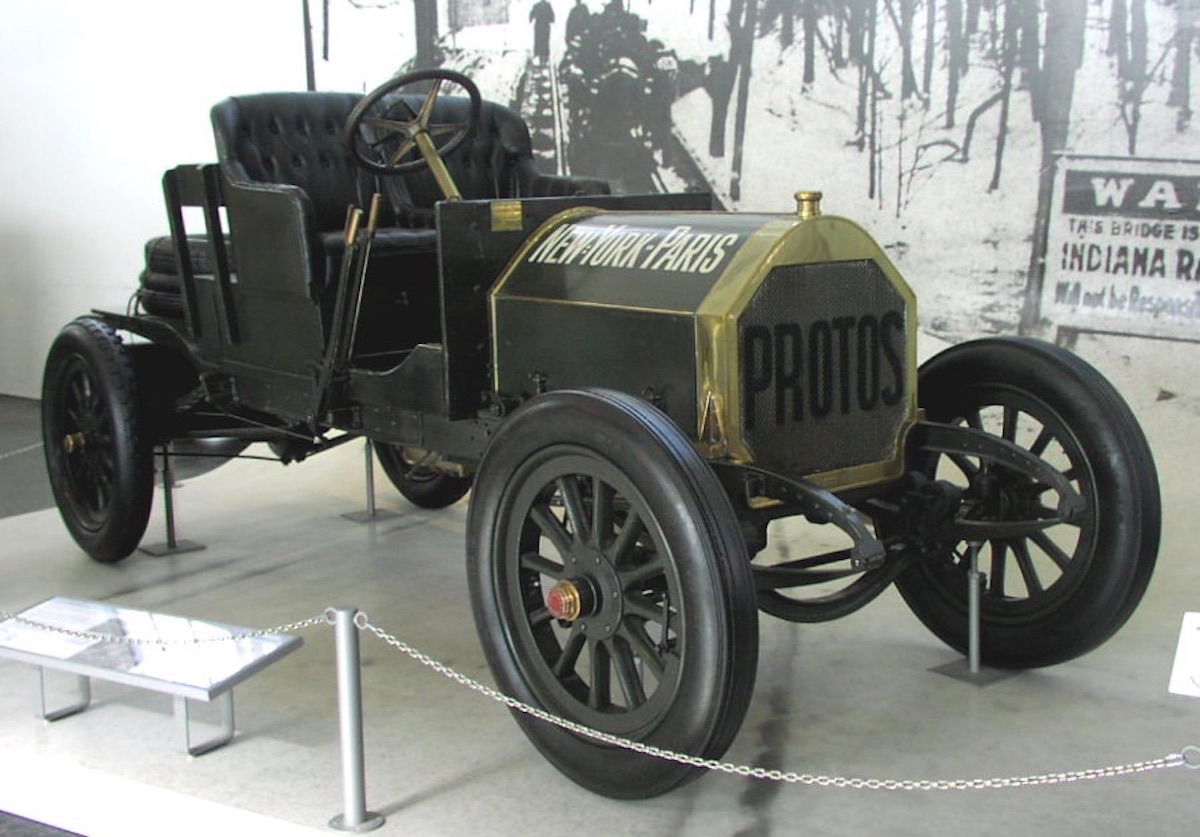 This adventure was named "The Great Race", took 169 days to finish and up until now is considered to be the longest motorsport event, and 26 days predominance - the largest winning margin in any motorsport event ever.