Lamborghini Countach – Child of the 70s, Icon of the 80s 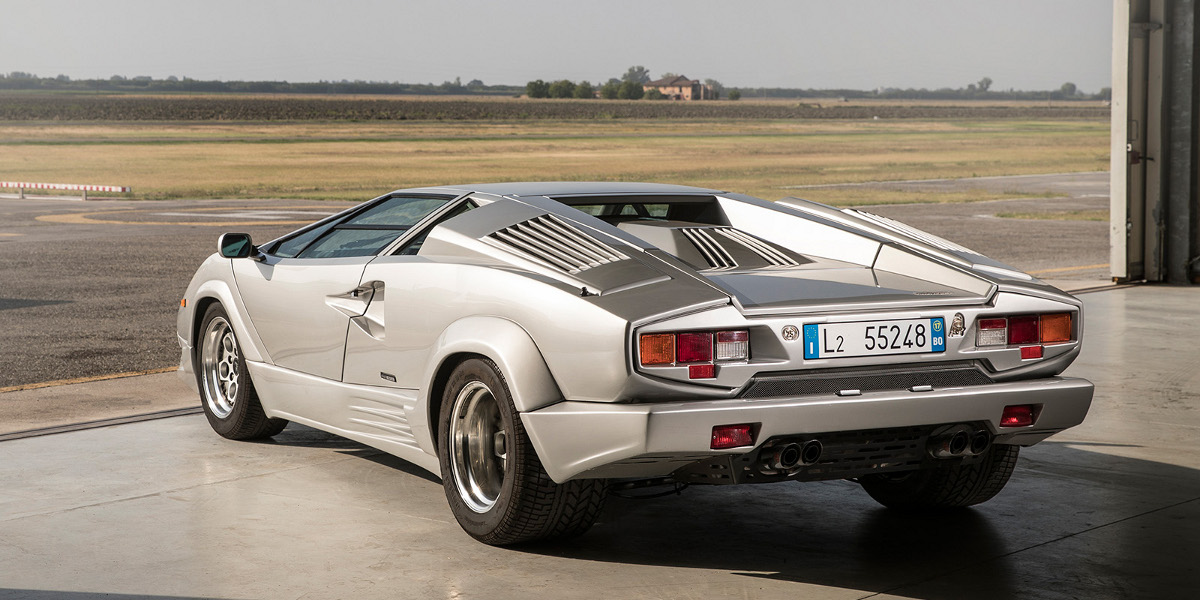 Lamborghini has been building cars for more than half of a century now, but their top of the food chain V12 supercar recipe has not changed much over the timespan. All five of the big Lambos share much the same architecture – massive V12 behind the seats and an outrageous body that turns heads and guarantees a spot on a bedroom wall poster (or a phone wallpaper). Countach, introduced in 1974, was the second car in the lineage was a perfect implementation of the formula.

First and foremost we must talk about the styling. Penned by Marcello Gandini, the father of wedge design himself, the Countach looked as if it could go at 500 km/h. Realistically, the iconic design was as aerodynamic as a brick, but it didn’t really matter – this wedge guise defined what a fast car should look like for a more than a decade. Another feature of Countach that stood the test of time were scissor, they would define Lamborghini pretty much forever. And, of course, this flamboyant styling was topped off with massive air intakes and pop-up headlights. Later iterations of the Countach even received massive fender flares and a spoiler.

Albeit it looked mental, some clever engineering went into producing this car. The original Countach, LP400, was named this way because its motor was mounted longitudinally in the back (longitudinale posteriore in Italian) for the best weight distribution and that is what LP indicates. The 400 points to the engine’s displacement of 4 litres. Its body was shaped from lightweight aluminium and built on a racecar-like tubular spaceframe. Later, Lamborghini even experimented with the use of carbon fiber, and there was one Countach prototype to be built from this exotic material, co-engineered by Horacio Pagani himself. Obviously, that did not make it into production, but the Countach was revised a number of times while in production. The original price of 1974 Lamborghini Countach LP400 ‘Periscopo’ started at $52,000.

Pop-up headlights are compulsory for a true 80s icon
© Lamborghini

LP400 S version received flared wheel arches and an optional spoiler, while it had its engine slightly detuned. The power was back with LP500 S, which had a bigger motor of 4.7 l. The engine was enlarged once more to 5.2 l for the 5000 Quattrovalvole (four valves) version, pushing out mighty 455 bhp in European guise. Top speed was achieved at nearly 200 mph (321 km/h) with zero-to-sixty taking under six-seconds. The last evolution of the Countach was the 25th Anniversary edition. Of course, it received even more power and aerodynamic enhancements. Two of the last versions made up the majority of Countach’s sales, and because they were both heavily clad in aero bits and rolled on massive 355 mm wide tires, that is how the Countach is mostly remembered today.

Despite rocking futuristic design and clever layout, the Countach was quite old fashioned at heart. It used carburetors all the way until 1990, when it was replaced by a Diablo. That is where its 70s origins shined through. Ok, the US-spec cars did receive fuel injection, but that was only done to please the Uncle Sam and its emission regulations. Even today, when their competitors are building hybrid supercars, using smaller turbocharged engines and seamless shifting dual-clutch gearboxes, Lamborghini tend to steer somewhat traditionally. The contemporary Aventador has a good old V12, mated to a single-clutch gearbox to maximize the thrills.

In other words, the Italian automaker prioritizes excitement over modernity. Drama over practicality. And the Countach is exactly like that. Its clutch is exceptionally heavy, the gear lever requires brute force to move it. Additionally, the rear visibility is non-existent while the proportions are so outrageous, most Countach drivers actually have to partially get out of the car to parallel park it.

The price of Lamborghini Countach

In many ways, the Lamborghini Countach is one of the all-time greats, surely one of the focal cars of the 80s. And classic car collectors are well aware of this status. Despite having a production run of 16 years, only approximately 2000 Countachs were ever produced, making them relatively hard to come by. Lamborghini Countach could cost $200,000, $500,000 or even over $1,000,000, prices varied depending on the year of make and its condition. As it is frequently the case, the older cars are costlier. But if it is spoilers, tire width or cylinders you’re after, the Countach is a very sensible purchase.