In every country's history you can find a car that is a symbol. A car that changed the lives of millions and that will remain in their hearts forever. A car that might not have been very extravagant, but which was a lot more to people than just a simple vehicle. The Germans have the Beetle, the French are proud of the Citroën 2CV, and the little Mini is undoubtedly an intrinsic symbol of Britain. When you think about Italy, many people may envision a red Ferrari, but we can hardly call such a rare and expensive car a symbol of the country. A symbol should be much more down to earth.

The first candidate to be the people's cars –the Fiat 500 – came out back in 1936 and was produced until 1955. Over this period, half a million of these cars hit the road; however, they were better known not as the Fiat 500, but as the Fiat Topolino. Incidentally, "Topolino" in Italian means "little mouse", and it is also the name used in this country for Mickey Mouse, whom some people associate with the look of the first Fiat 500. However, it was not the Topolino that was destined to become Italy's auto-symbol. 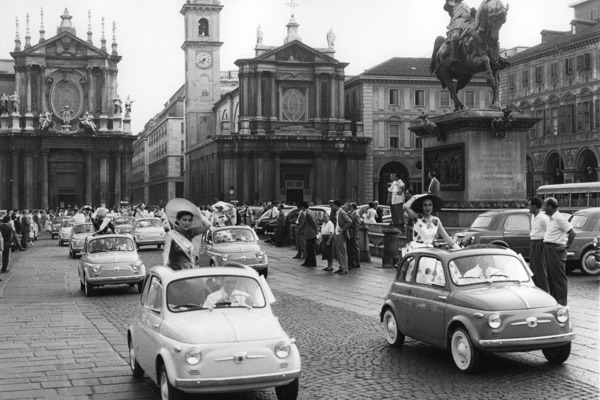 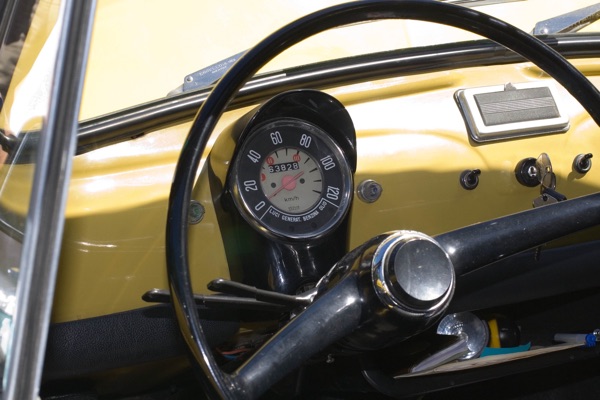 The Topolino was quite successful, but Dante Giacosa, the legendary Italian engineer behind it, wanted to create an even better and more affordable car. Thus, his Fiat 600 ("Seicento" in Italian) came out in 1955 and was a big step forward compared with the Topolino. It was a rear-engine car, so the cabin was much roomier, with the rear seats able to accommodate both children and adults; furthermore, it greatly surpassed its predecessor in terms of driving. With a price tag of 590,000 lira, the Fiat 600 cost less than the Topolino did in 1936 if you take inflation into account. However, it was not the 600 that was destined to become the force behind Italy's motorisation either.

While he was still designing the Fiat 600, Dante Giacosa was also working on another vehicle – one that was even smaller, more economical, simpler and cheaper. He understood that the Italians wanted cars, and they were willing to make do with less space, provided it was on four wheels. This was because up until then, the only cheap motorised alternative was a scooter. Actually, Fiat had planned that their new micro-car would often be the choice instead of a scooter. Giacosa tried to justify a car like this with logical arguments: "No matter how small, a car will still be more comfortable than a scooter, particularly in winter and in the rain; we are sketching models of unconventional small cars that will have to compete with the Vespa in particular." 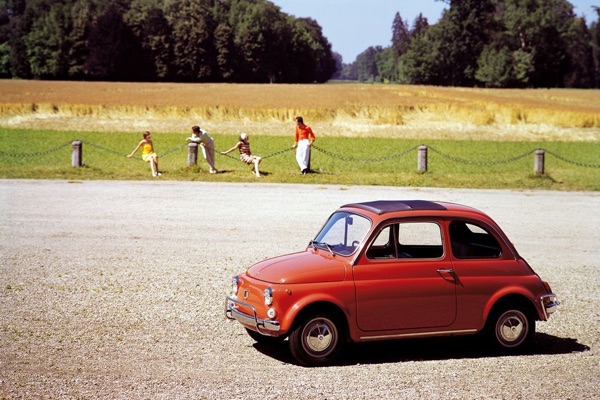 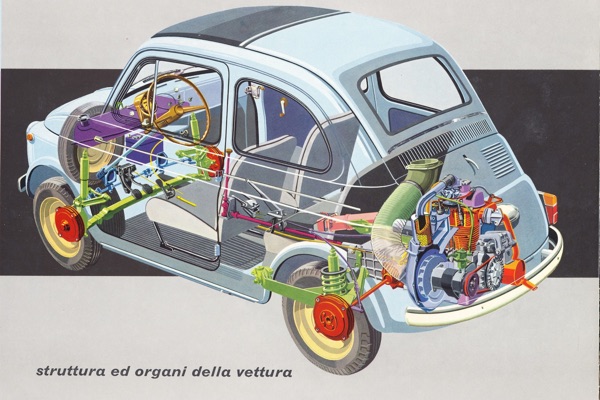 It had long been decided that the little car, which was Fiat's cheapest, would be called the 500 – this reflected the size of its engine (479 cm3) and was meant to act as a reminder of its forefather, the Topolino. In addition, the 500 was meant to create a nice duet with its big brother, the 600, which was designed for buyers who were a bit better-off. And so, in the summer of 1957 – just two years after the launch of the 600 – the Nuova ("New") 500 was officially introduced to the general public. 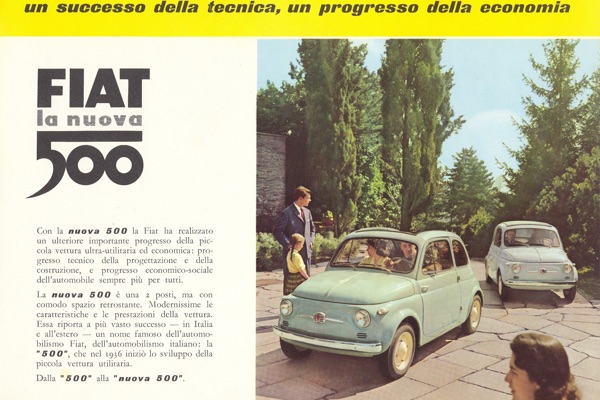 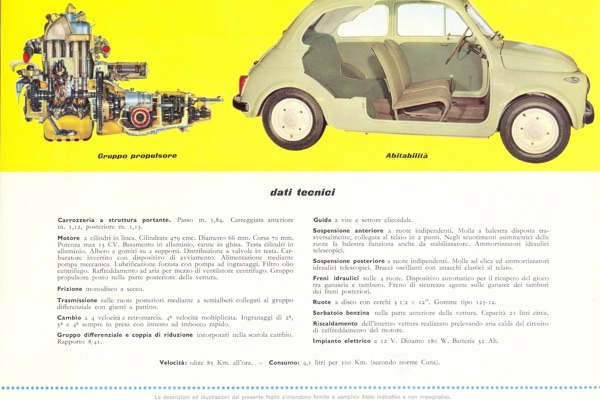 The car was certainly very small, with a length of less than 3 metres (which, truth be told, was not necessarily a drawback if you lived in the old towns of Italy), and a width and height just a bit over the 1.3 metre mark. It didn't even weigh a half a tonne when empty, and could accommodate two adults in front and two children in back. The 479 cm3 two-cylinder engine could produce just 13 horsepower, and the gearbox was without synchronisers. In order to keep the car cheap, everything possible was saved on – the Nuova 500 had just three switches: for the speedometer illumination, the exterior lamps and the windscreen wipers. The first models didn't even have any kind of fuel gauge – only later was a light put in that turned on when there was less than five litres of petrol left in the tank.

The fancy, stream-lined design was also determined not by fashion, but in order to save on metal, which was very expensive in Italy at that time. As a result, each buyer also got a mandatory fabric sunroof, which appeared for very pragmatic reasons – fabric was cheaper than metal. You will also never find any data about how fast the first Fiat 500 could accelerate to 100 km/h, since this speed was out of the question with 13 hp; however, this was not what was most important. The car was 150,000 lira cheaper than the Fiat 600, making it affordable for every working family. Thus, Fiat started making them by the thousands and put all of Italy on wheels.

Later the Fiat 500 Giardiniera came out –this station wagon was longer and had four full-fledged seats as well as a substantial boot. The car also stood out for a unique technical solution: the engine was laid on its side, giving the car a flat and low loading surface. The Giardiniera was a very suitable alternative for those who found the standard 500 to be too small. In 17 years of production, nearly half a million of these estate cars were built, and it was the Giardiniera that later had the honour of ending the 500 dynasty – it was produced for another two years after the standard car was taken out of production. 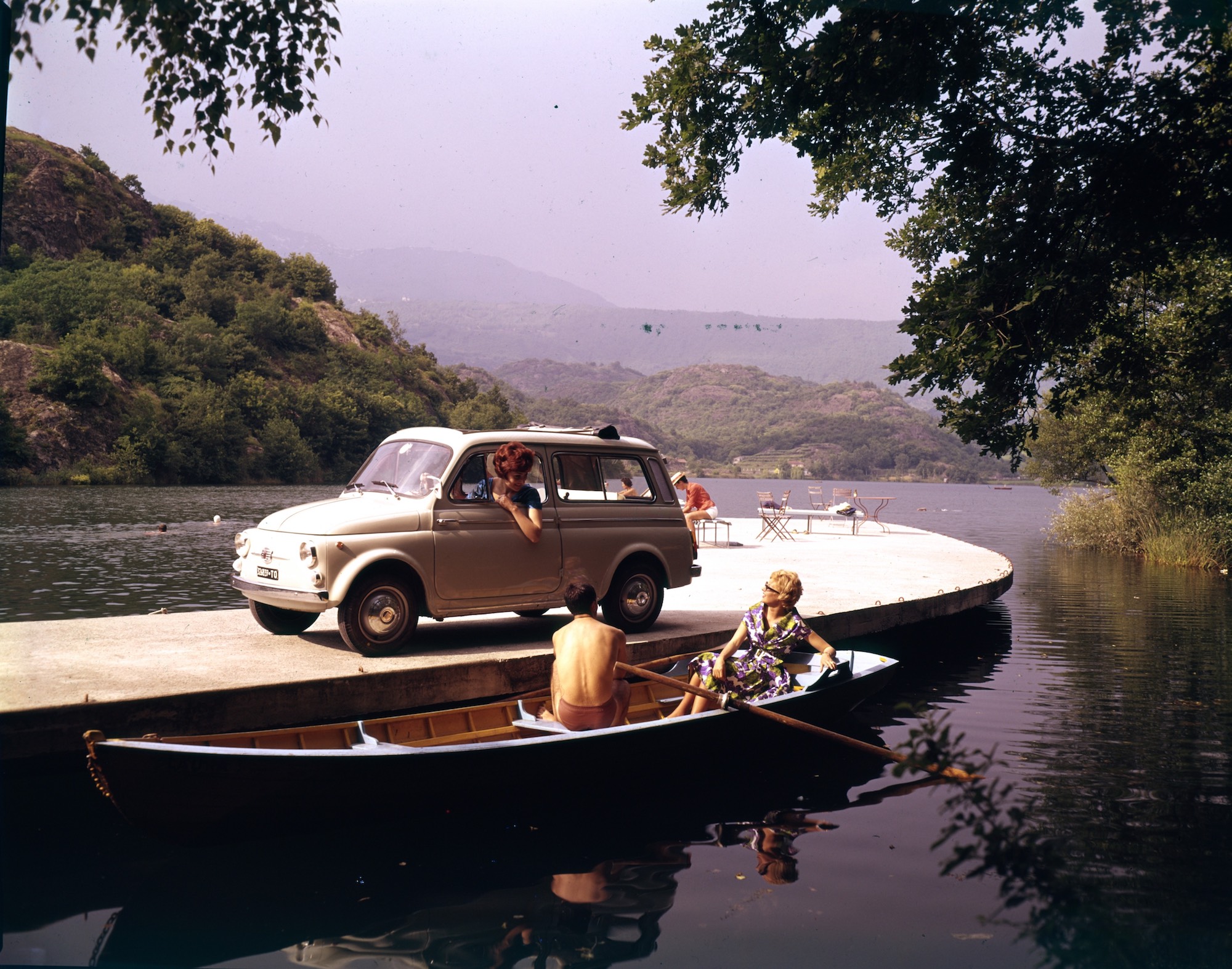 The Nuova 500 Sport version was introduced for those who wanted to fly faster. The Sport had a 21.5-hp engine and could reach a top speed of 105 km/h, so compared with the standard version, it gave drivers quite a bit of adrenaline, while also doing some good advertising in improving the 500's image. A bit later, the Abarth 595, a bona fide sports car based on the Fiat 500, came out of the Abarth studio. 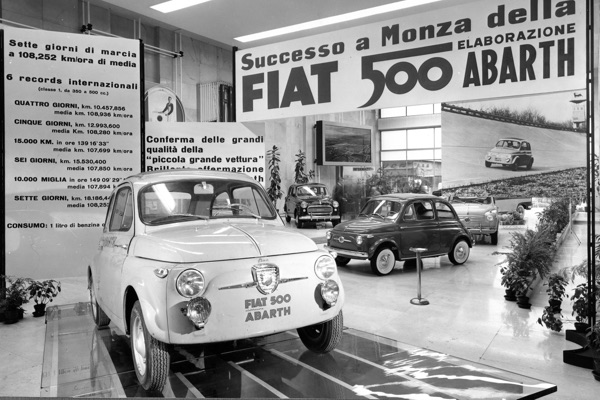 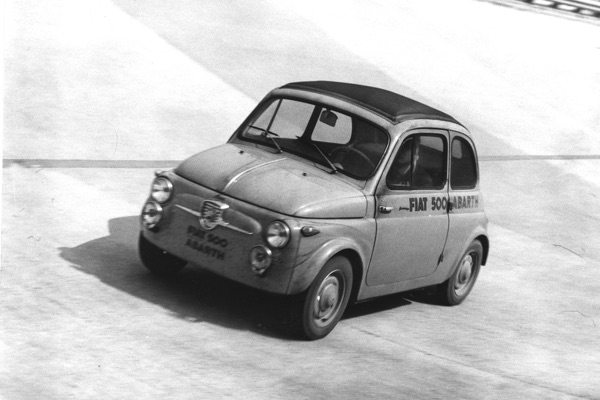 This was followed by different modernisations of the model, the most significant of which took place in 1965. The updated 500 F that came out that year was quite a bit different from the 1957 Nuova. The design changed a bit, with the car getting "normal" doors to replace the previous "suicide doors", and it also received a more powerful 499 cm318-hp engine. Three years later, an even more luxurious version came out – the 500 L or Lusso, but times were changing and the Fiat 500 era was coming to an end. 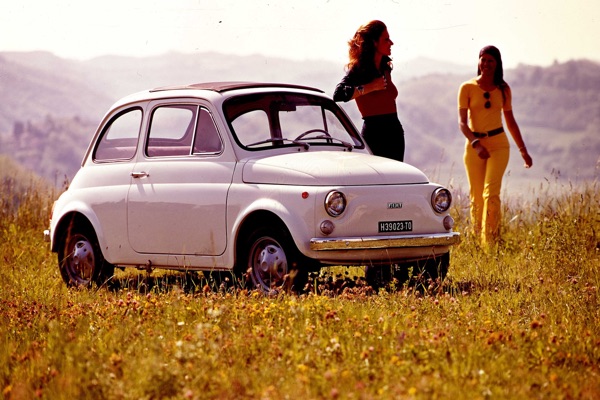 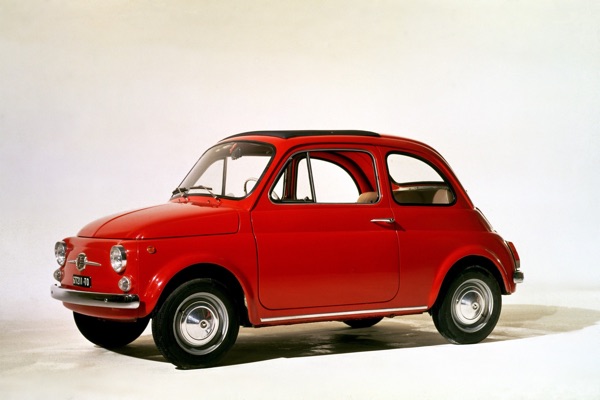 As the 1970s rolled in, cute, chubby design was no longer in fashion, so Fiat launched the 500's successor – the Fiat 126 – in 1972. The Fiat 500 was produced alongside the Fiat 126 until 1975, and including the more luxurious Autobianchi and Abarth sports versions, over four millions of these wonderful cars were produced – a figure that even now demands respect. Despite all of Fiat's efforts, the 126 that replaced the 500 never reached the popularity of its predecessor – that is, except for one country. Produced in Poland as the Polski Fiat 126p, this became one of Poland's most popular cars of all time – a true symbol of Polish automobilism. 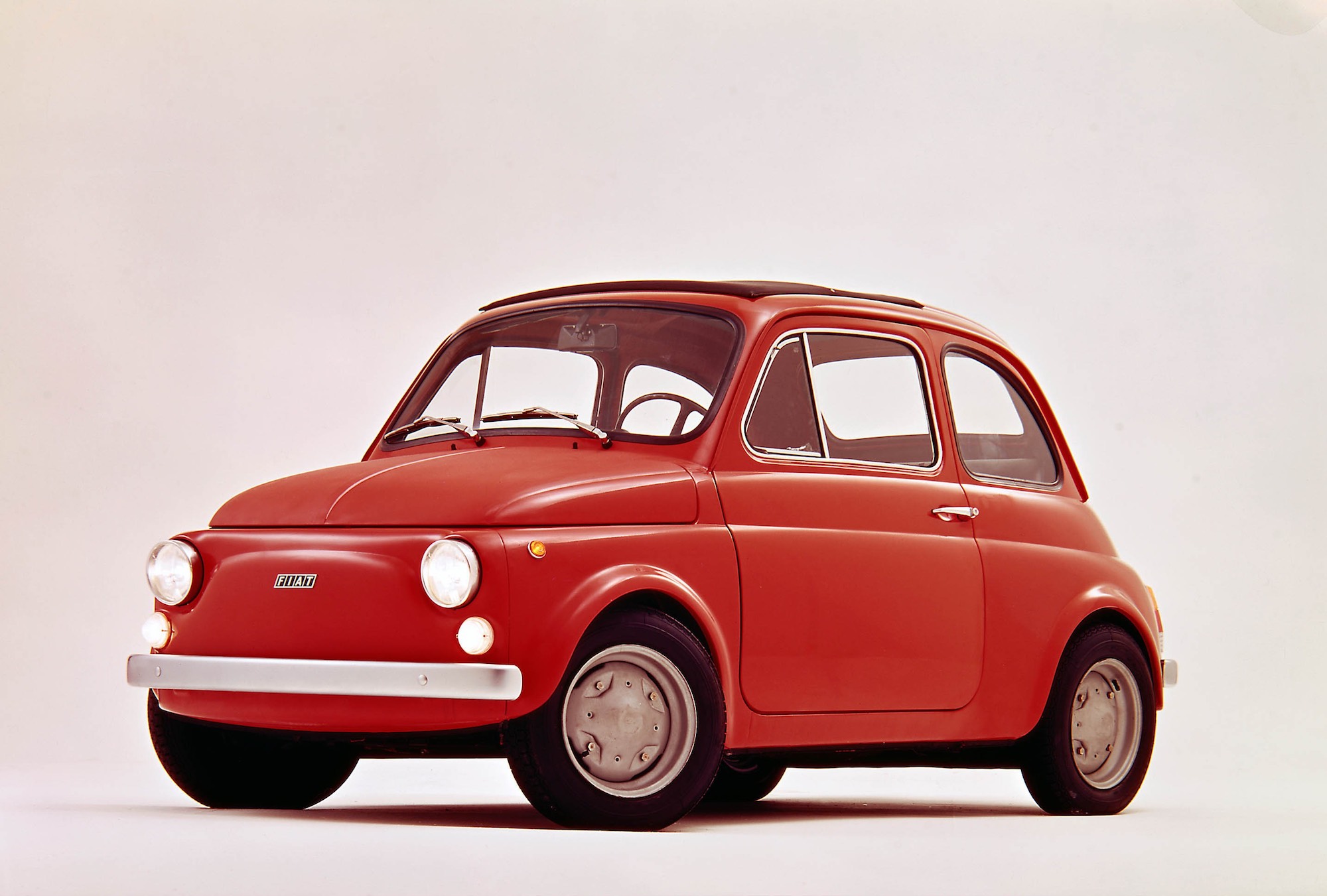 The impact of the Fiat 500 is more than obvious. In 1950, there were barely six cars per 1,000 inhabitants in Italy; one decade late, there were already 32, and after another two decades the Italians – with 330 cars per 1,000 inhabitants – were up there among the most motorised countries in Europe. The Fiat Nuova 500 – which was never imported into the United States – even made an appearance in a Pixar Animation Studios film as Luigi. And it is uncertain if the new Fiat 500 that came out in 2007 would have been so successful if it wasn't for its genes. A lot of polls have been conducted where the public has voted for the most important and influential car of the 20th century, and the Fiat 500 was always among the main contenders. And for Italians, it will always be #1.