The Age of the Performance Hybrid Mercedes-Benz is Here: These Are Five of Our Favourite Old School AMG Cars

But before we get too excited, let’s face facts - over the years, the essence of Mercedes-Benz's iconic grand touring roadster has become somewhat lost. To understand what has happened, we must travel back in time to the post-war period.

The first Mercedes SL - the 300 - arrived in 1954. The exquisitely-proportioned roadster immediately shook the automotive world with its long bonnet, and short rear-end. Given the car was released in less than 10 years after World War II, the Rudolf Uhlenhaut-designed car was a masterclass in combining beauty and aggression. The SL designation also paved the way for one of 300 SL “Gullwing” - a car widely considered to be one of the most beautiful pieces of car design in history.

Over the years though, the essence of what makes an SL an SL has been lost. The latest version of Mercedes’ originally dainty grand tourer - the SL R231, which has been in production since 2012 - is now more of a comfort-oriented cabriolet, instead of a sporty, performance-oriented GT.

Without a doubt, the Mercedes SL is still a very nice thing. Unfortunately, the latest iteration looks and feels outdated compared to newer rivals such as the BMW 8 Series, the Porsche 911 992, and the Jaguar F-Type.

In fact, the SL's popularity has dwindled to such an extent that "Mercedes SL" followed by "discontinued" is a leading search term when you type the make and model into Google.

The good news is, though, is that Mercedes has taken notice of this downward spiral and by 2022, we should have an all-new SL that harks back to the original automotive icon.

According to the spy shots and artists mock-ups, the all-new SL will have smaller dimensions, but the trademark long bonnet, and squat rear end will still remain. Most importantly, there will be a return to the canvas convertible roof, which should go some way to consigning the unnecessary weight gain incurred by the current car’s folding electric hood to the past.

The upcoming SL’s interior is also predicted to be lifted from the latest generation of S Class. That’s no bad thing, given that Mercedes interiors are now a symphony in tech, luxury, and design. Factor in that trademark German quality, and we’d go as far to say that Mercedes currently make the best cabins.

For most of its life, the SL has been a symphony of damage, control, style and aggression in terms of blending beauty with power. Thankfully, according to a report in CarScoops, the upcoming model should be no different.

Entry-level SL 43 cars will come with a 3.0-litre, naturally-aspirated, straight-six engine. The mid-range SL 53 and SL53e will be fitted with a turbocharged version of the same unit. The latter will come fitted with an electric compressor which boosts power from 360bhp to at least 440bhp. Meanwhile, the range-topping 800bhp SL 73e is set to be an eight-cylinder, plug-in hybrid. It’ll also have all-wheel-drive to cope with that immense amount of power.

The fact that the flagship of the next-generation of SL will be a plug-in hybrid is a clear sign of intent from Mercedes regarding its aggressive electrification strategy. By the end of 2020, the Stuttgart-based carmaker is set to have added 20 plug-in hybrid models to its line-up. Meanwhile, a further 11 vehicles will be added to its all-electric EQ model range by 2024.

With the old-school AMG soon to be consigned to the pages of automotive history, Dyler.com looks back at some of our favourite internal combustion engined-powered AMG cars from recent years. 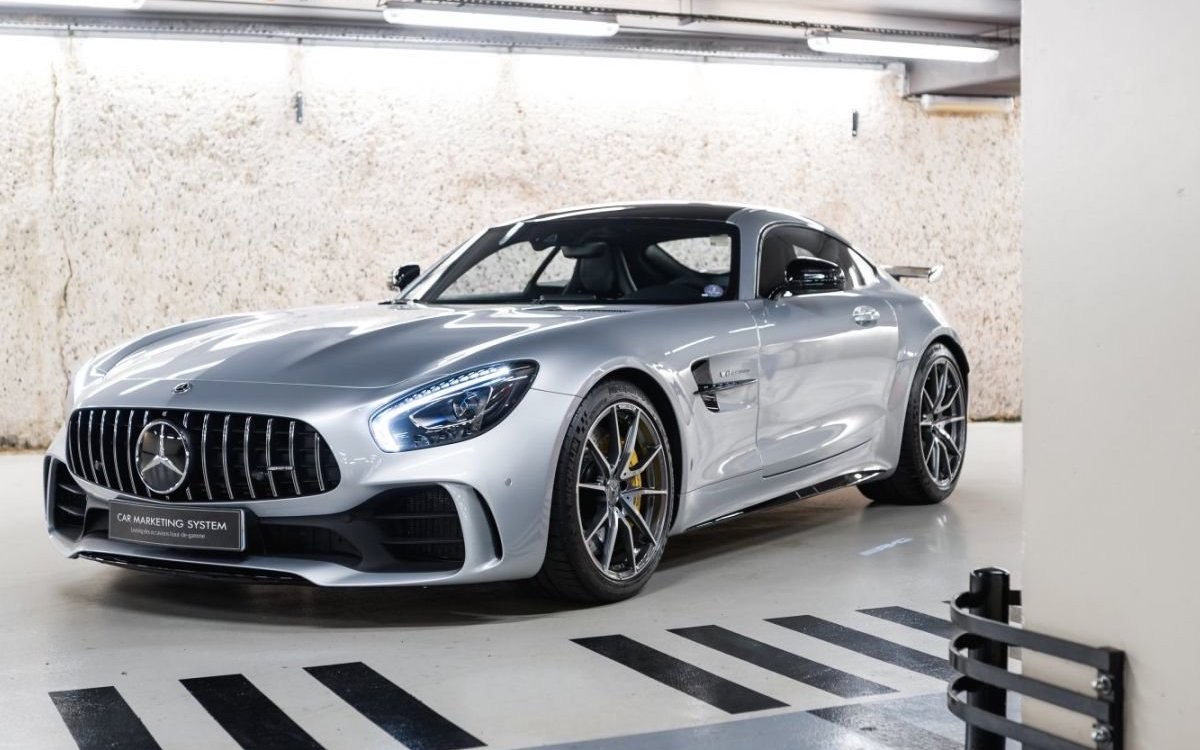 You can use it every day, but the Mercedes-Benz AMG GT R is a supercar that’s retained its sense of humour
© Car Marketing System

Despite the snarling front end and shirt-ripping, aggressive AMG bodykit, the Mercedes-Benz AMG GT R is not the track car you’d expect. Yes, it is powered by AMG’s bellowing, twin-turbo V8, and yes, it lapped the Nordschleife in a smidge over 10 minutes. But the beauty of this car lies in the fact that whilst it’s a rival to the Audi R8 V10, McLaren 570S, and the Porsche 911 Turbo, you can still use it every day. It’s predecessor, the SLS was a tyre smoking, wayward thing that would strike fear into the hearts of the most confident of drivers thanks to its rudimentary rear-wheel-drive system and big V8. The AMG GT R is not like this. It agily plants its 577 horses onto the tarmac, and whilst you’re travelling fast (very fast, in fact - the AMG GT R will go from 0-62mph in 3.7 seconds) you won’t be screaming for your mum. Whilst much more driveable and generally more sorted than the previous car, the AMG GT R still hasn’t lost the SLS’ sense of humour. Turn the nine-point traction settings to ‘off’ and it’s still possible to go sideways in a plume of tyre smoke with a smile on your face. The AMG GT R is a car that knows how to have a good time, but it’s also capable of keeping its party boy side under control. Just. It’s an epic machine, and it’s fully worthy of the AMG badge. 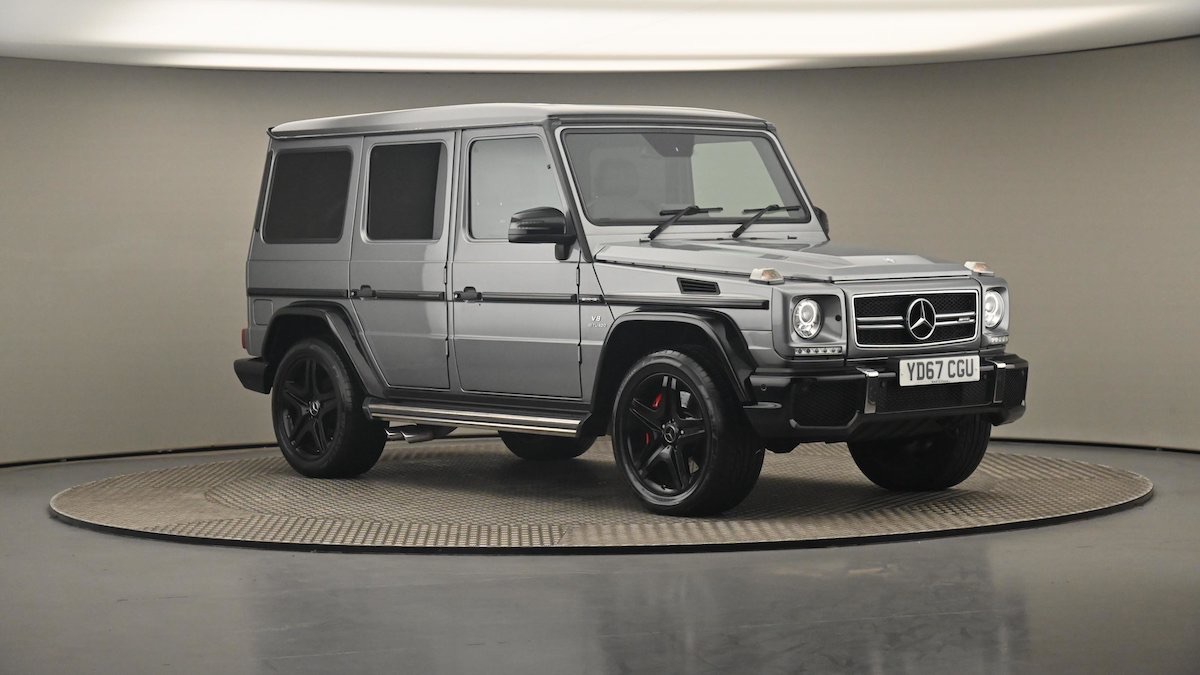 The G63 AMG needs no introduction. It’s big, it’s very silly, and it’s very, very fast. Under the hood of Mercedes’ answer to the Land-Rover Defender lies an AMG tuned 5.5 V8 which pumps out 563bhp and 561-lb of torque. That’s enough power to revolve a moon. In 2019, Mercedes introduced an all-new version of the G Class. Whilst the version you see here doesn’t have the new S Class-esque interior, it is still extremely luxurious, it’s still daft levels of fast, and it’s still Defender-levels of capable off-road. By 2024, Mercedes will introduce an electric version of the G Wagen to its model range, so the question marks surrounding the AMG version of the G Wagen’s future remain. The G63 AMG isn’t a particularly sophisticated thing, and in an age of electric cars and projected carbon neutrality, it’s a celebration of the excessive. That said, these reasons are why it’s an AMG classic. 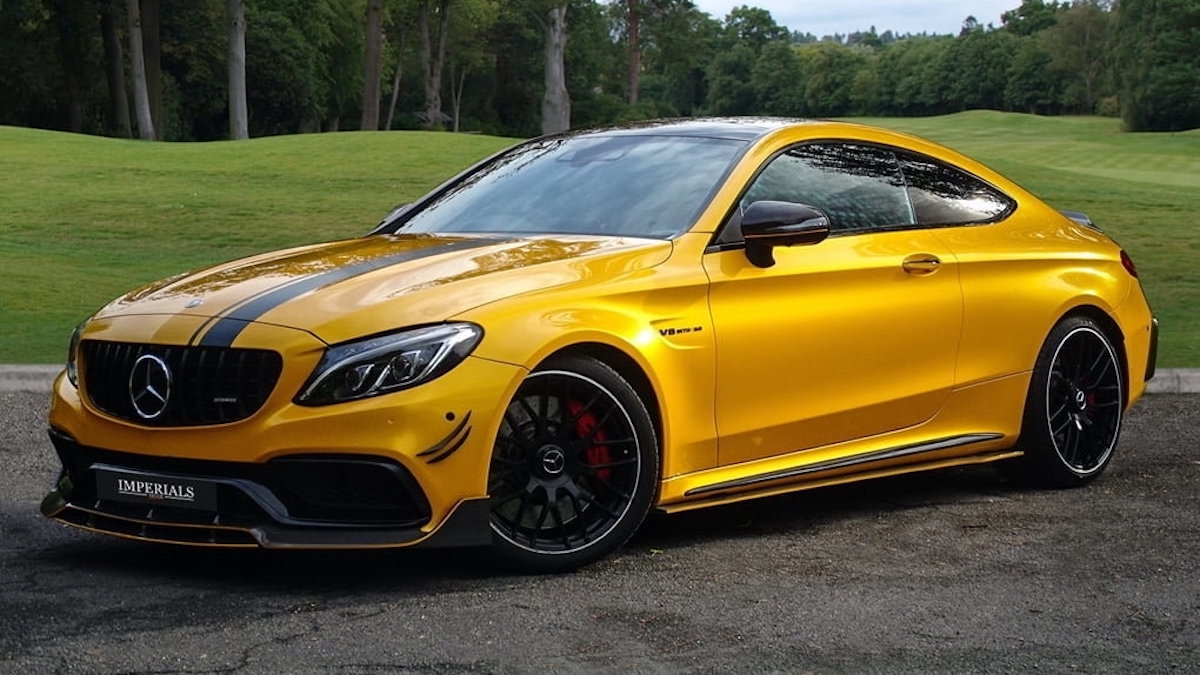 Shouty, brash, and braced with a twin-turbo V8, the Mercedes-Benz C63 S is an utterly charming AMG car
© Imperials

The C63 AMG is Mercedes’ answer to the Audi RS 5 and the BMW M4. Not content with the standard car’s 469bhp, those crazy Germans at AMG’s Affalterbach bolted on a pair of BorgWarner to its 4.0-litre V8 to up the S’ power from 469bhp to 503bhp. That’s a lot. It’s not subtle, either. Look at it. The C63 S is insanely fast - in fact, it boasts more torque than a McLaren 570S, Lamborghini Huracàn, and an AMG GT. In standard mode, the C63 S is an agreeable thing to drive. It’s comfortable, civilised, and well-balanced. Switch the traction control off, and it becomes squirmy and back happy. However, the sharp, direct steering means that the shouty Mercedes seldom feels like it’ll send you oversteering off the road. The C63 in all of its iterations has been an immensely likeable thing. It’s flashy, powerful, and it’s a left-field choice compared to its rivals. But for all of its jingle-jangle and shout, it’s impossible to not fall under its spell. 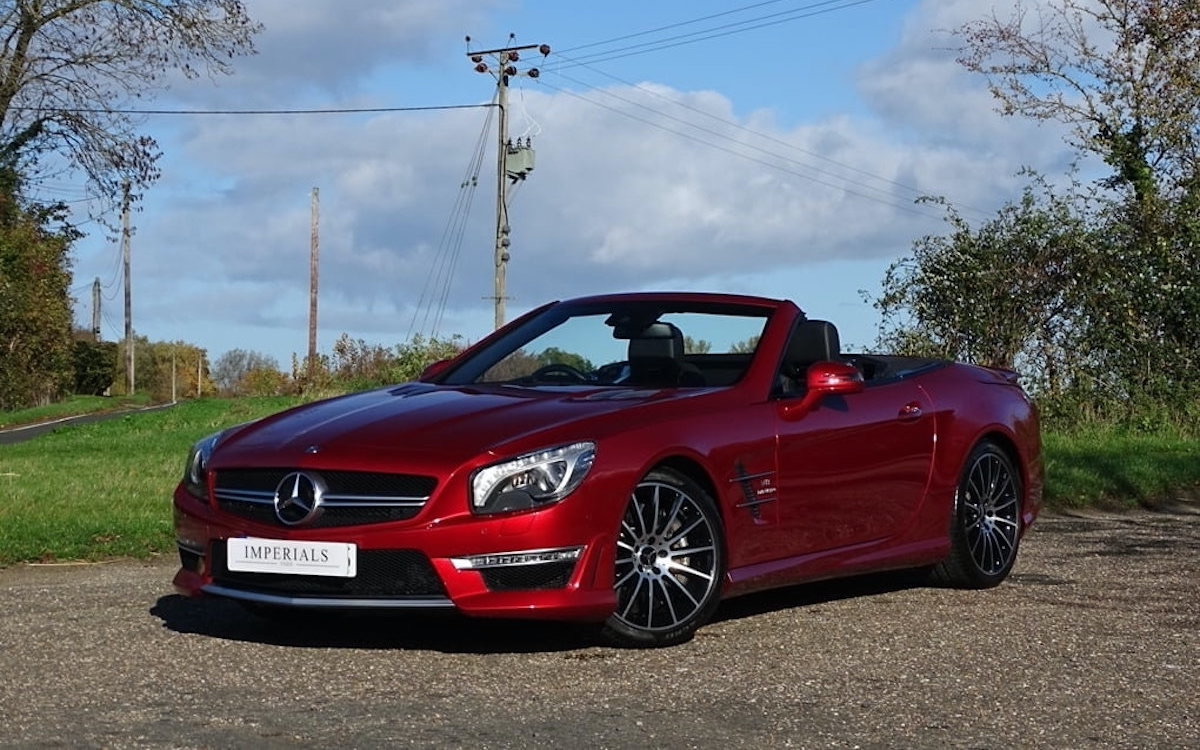 Until the new Mercedes SL comes in 2022, this R231 version of the SL 63 AMG is the most powerful version of the SL available. It’s powered by a twin-turbo 5.5-litre V8, so it’s got more than enough shove. However, the AMG boffins have added a limited-slip differential to its big GT to make the drive more engaging than previous iterations of the SL. In classic car terms, though, the outgoing SL 63 AMG represents the end of an era for the big, non-hybrid version of the SL. At just over 43k - a huge drop from a brand new car’s £115k asking price - it’s a steal. 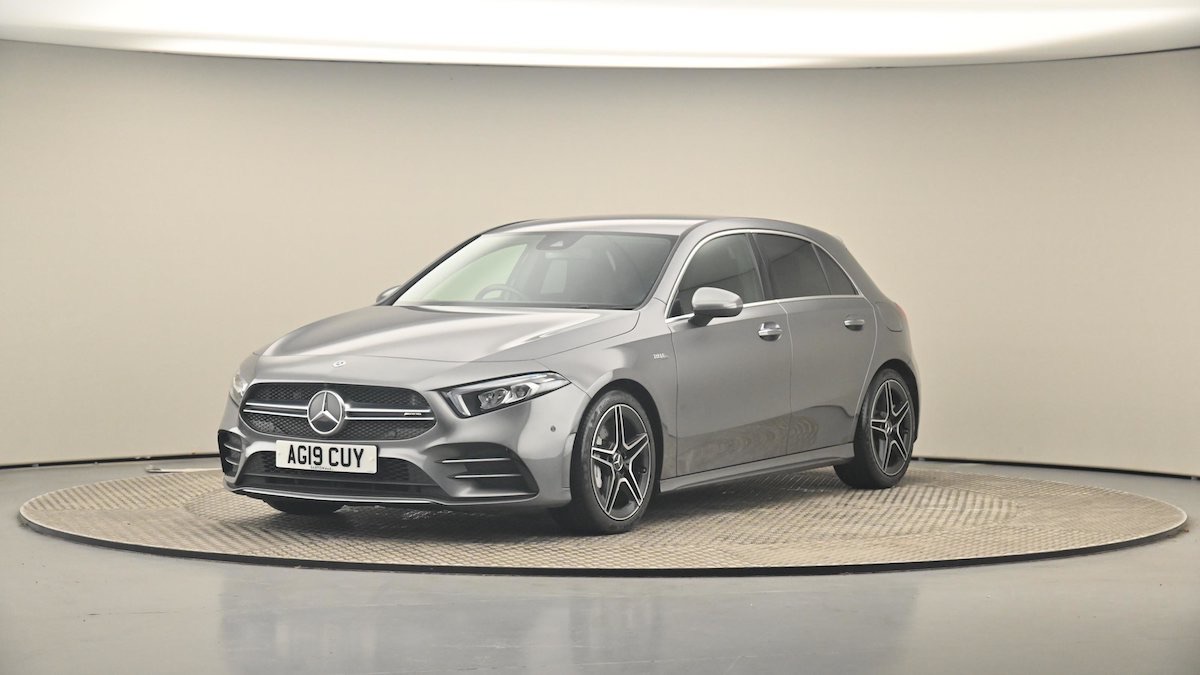 Small, fast, and fantastic inside, the all-wheel-drive A35 is AMG’s answer to the Volkswagen Golf R
© Saxton 4x4

The A 35 AMG is the smallest car in the AMG range, but it’s by no means undeserving of the Affalterbach badge. Just like its main rival - the Volkswagen Golf R - the 305bhp A 35 comes with standard all-wheel-drive, meaning it can deliver its power down on the twisty stuff. Whilst it may be slightly more sensible than the VW in terms of its handling, the Mercedes has the best interior of the hot hatchback class - inside it’s all dual digital touchscreens, tasteful lighting, and posh brushed metals. The model you see here is without the optional AMG exterior pack which gives it a rear spoiler and shouty bodykit. Small, fast, well-built and incredibly desirable, the A 35 is a left-field choice which serves as a gateway to AMG fast thrills without the fear.