Instagram’s Obscure Cars Daily Has Chosen These Five Cars as Their Favourite Listings on Dyler.com

For 2021’s second edition of This Week in Cars, we’re joined by Mr. Obscure - the founder of the Instagram account, Obscure Cars Daily.

Since Obscure Cars Daily - or ‘OCD’ in Instagramese - was founded in April 2020, the account has gained over 40,000 car enthusiasts who are searching for something beyond the realm of modern day supercars or the classics we all know and love.

This week, Mr. Obscure contributed an excellent feature to Dyler.com in which he analyses the Cadillac Allanté’s place in modern classic car history. You can read that here and make up your own mind as to whether GM’s rival to the Mercedes-Benz SL and Jaguar XJS was a “superb failure, or an automotive Beanie Baby.”

Mr. Obscure also joined us for this edition of This Week in Cars. Out of the tens of thousands of cars looking for new homes on our website, he has selected the five cars you’ll find listed at the bottom of this feature.

To round of this special edition of TWIC, the Obscure Cars Daily founder also gave a short Q&A about his account, Instagram’s role in the growing obscure car movement, and why he’d take a shitbox over a supercar any day of the week.

The floor is all yours, sir...

Dyler.com: Why did you start Obscure Cars Daily back in April 2020?

Mr. Obscure: Well, it started when I was sent home from work because of the plague. With a ton of free time on my hands, I began absorbing a lot of car pages on Instagram. Honestly, very few appealed to me. For example, I would see posts with maybe one photo and absolutely no information on the car. What if people wanted to know the history, specs, or even the designer? Additionally, so many of these pages were virtually identical. I wanted to create something new, something that focused on the writing content to provide proper information on the cars and their creators, as well as some humour to make things fun.

Dyler.com: What do you find appealing about "obscure" or non-mainstream cars?

MO: I like them because they’re always teaching me something new about automotive history. Mainstream cars tend to desensitize me, even the sexy ones. For example, I was at the Pittsburgh Vintage Grand Prix a few years ago, and apparently I walked straight past a new Ferrari 488 just to check out a rusty Daimler SP250. Cars like that just draw me in because they’re different, and the owners usually possess a wealth of knowledge that they’re usually happy to share with anyone interested.

Dyler.com: There seems to be a growing community of obscure car fans online, especially on Instagram why do you think this is?

MO: Yes, it seems like that there is a growing number of obscure car fans. Personally, I believe it’s due to our human nature to be attracted to the unknown. I see this a lot, especially amongst car enthusiasts who know only either modern supercars or mainstream classics. But if you show these same people something like the Serenissima Agena or the Monteverdi 450 Hai, then it’s almost as if their jaws drop in awe from that sense of discovery. For true classic car lovers, that thirst for knowledge is intoxicating.

Dyler.com: How has Instagram helped grow the interest in obscure cars and obscure car culture?

MO: Primarily, I believe it’s the photo-oriented aspect of the platform, as well as the community. If you go onto YouTube, most of us are bombarded with videos showing the same modern hypercars or mainstream classics in a nearly identical format. On Instagram, especially through the Explore feature, it allows users to easily discover a multitude of cars that we may not have even heard of. The community is also incredibly supportive. I personally receive messages from thousands of amazing people from across the world, and they all send in a plethora of great cars that I never knew existed. Truthfully, it’s people like that who help keep this movement going.

Dyler.com: What would you prefer as a Daily Driver – shitbox or supercar?

MO: Shitbox. Totally. they’re great to abuse without worrying too much about repairs. Plus they don’t usually get much attention from the police, which I tend to favour! 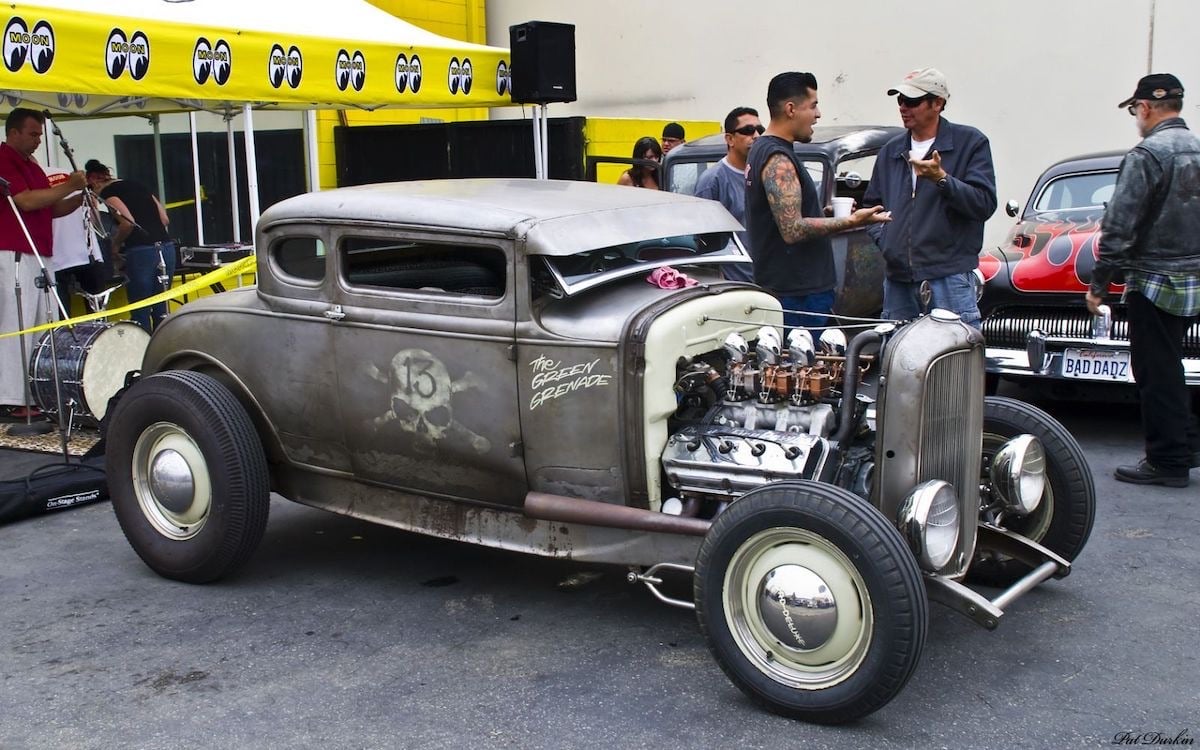 The Ford Model B was massively popular amongst hot rodders thanks to an abundance of spare parts and mechanical simplicity which meant more power on tap
© silodrome.com

The Ford Model B was the successor to the Ford Model A, a car that outside of its native Dearborn in the United States, was also made in places as far-flung as Nizhny Novgorod in the Soviet Union, and Buenos Aires in Argentina. Produced from 1932 to 1934, the humble Model B gained a cult following amongst hot rodders in the post-war years as it was cheap, and parts were plentiful for this mass-produced vehicle. It was also the first Ford production model to be fitted with a flat-head V8 motor which could be tuned - or even removed - in the quest for more power, and the Deuce Coupe variant of the Model B with its standard V8 was the vehicle of choice in the hot rod subculture in post-war America. Almost 90 years on since it first rolled off the production lines, the Ford Model B is becoming an increasingly rare car - parts are now scarce, and most have been modified for hot rodding means with their steel bodies replaced by fibreglass units. 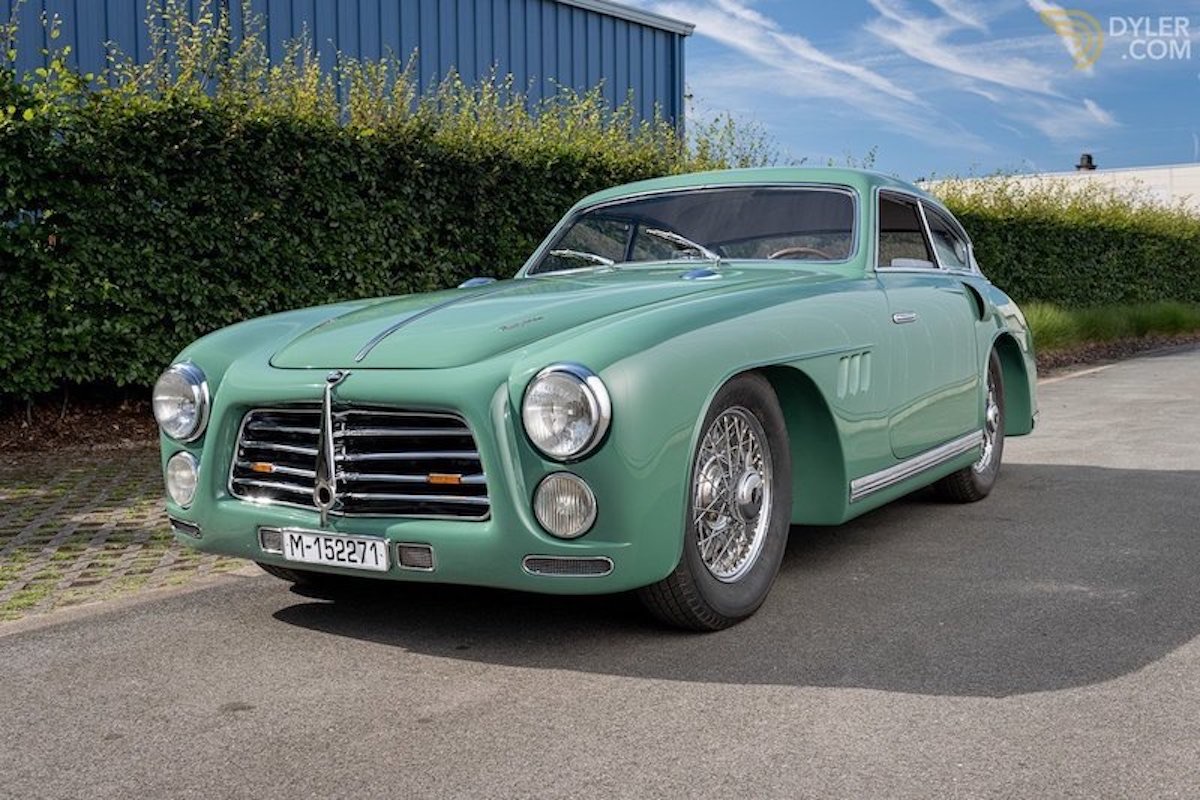 Spain isn’t the first country that springs to mind when it comes to performance cars, is it? Well, it turns out that from 1951 to 1958, the Spanish car industry could lay claim to making the world’s fastest production car. In supercharged form, the Pegaso Z-102 - the machine you are looking at now - would reach 151mph, a number which put it ahead of the previous record-holding Jaguar XK120. The Z-102 was a celebration of European, post-war unity. Made in Barcelona, the car was the brainchild of ex-Alfa Romeo man, Wifredo Ricart, who designed the Alfa Romeo Tipo 512 - a machine intended to replace the Formula 1 title-winning Alfa Romeo 158. In the seven years that the Z-102 remained in production, just 83 of these ultra-rare automobiles were made. To add to the air of exclusivity that already surrounded Spain’s sports car, already exclusive nature, Franco-Russian coachbuilder, Soutchik, added their Liberace-esque touch three to three of these vehicles. 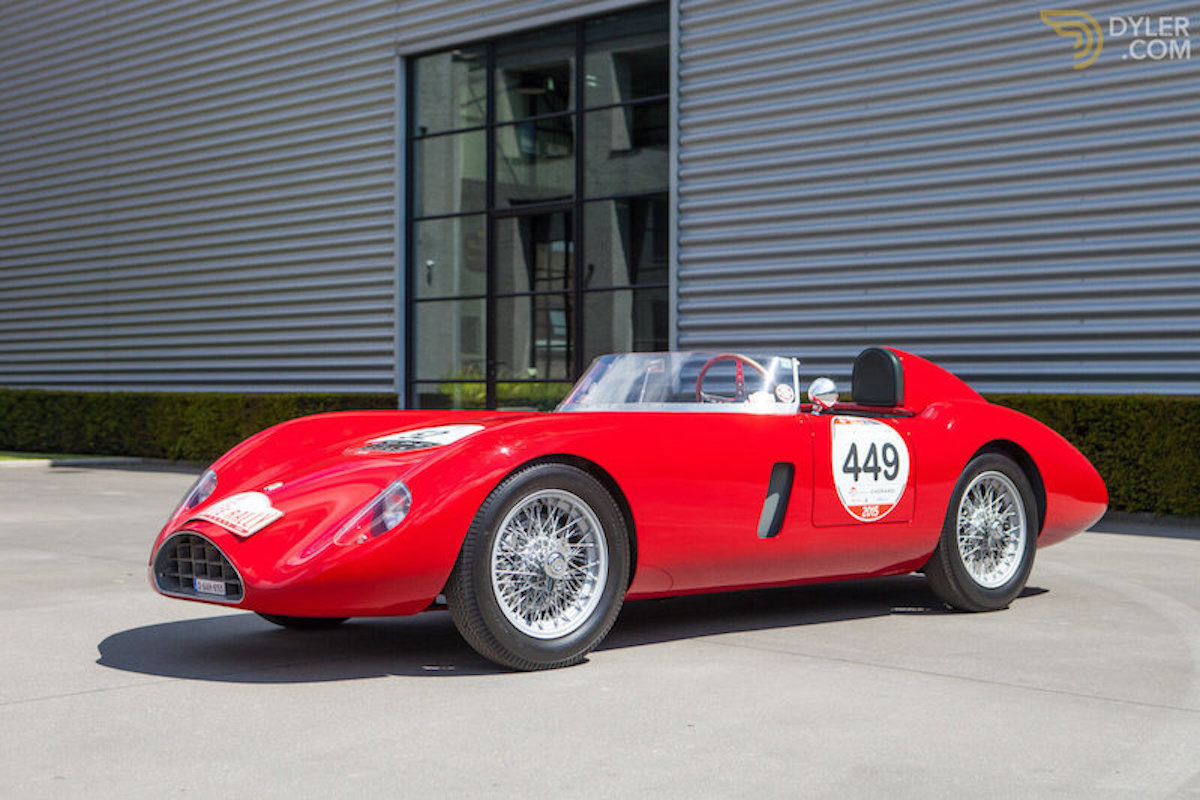 The tiny Bandini Saponetta weighed just 340kg and was powered by a tiny 850cc or 1000cc engine - that didn’t stop it from holding its own in European and US-based race series’, though
© RSC Automobile

Amidst the titans of Italian sports car makers, the name Bandini isn’t one that crops up too often. Yet despite its relative obscurity, this tiny sports car maker often punched way above its weight in the Italian Sports Car Championship and in Stateside hillclimb events from the late 1950s to the 1970s. Named the Saponetta or ‘little bar of soap’ thanks to its soap-bar shaped body, the Bandini Saponetta was powered by relatively tiny 850cc and 1000cc engines. However, its lightweight aluminium construction - the chassis and engine together weighed a feather-light 340kg - combined with an aerodynamically-efficient form meant it could keep up - and often outpace - bigger, more powerful machinery at low-downforce race tracks such as Monza and Daytona. 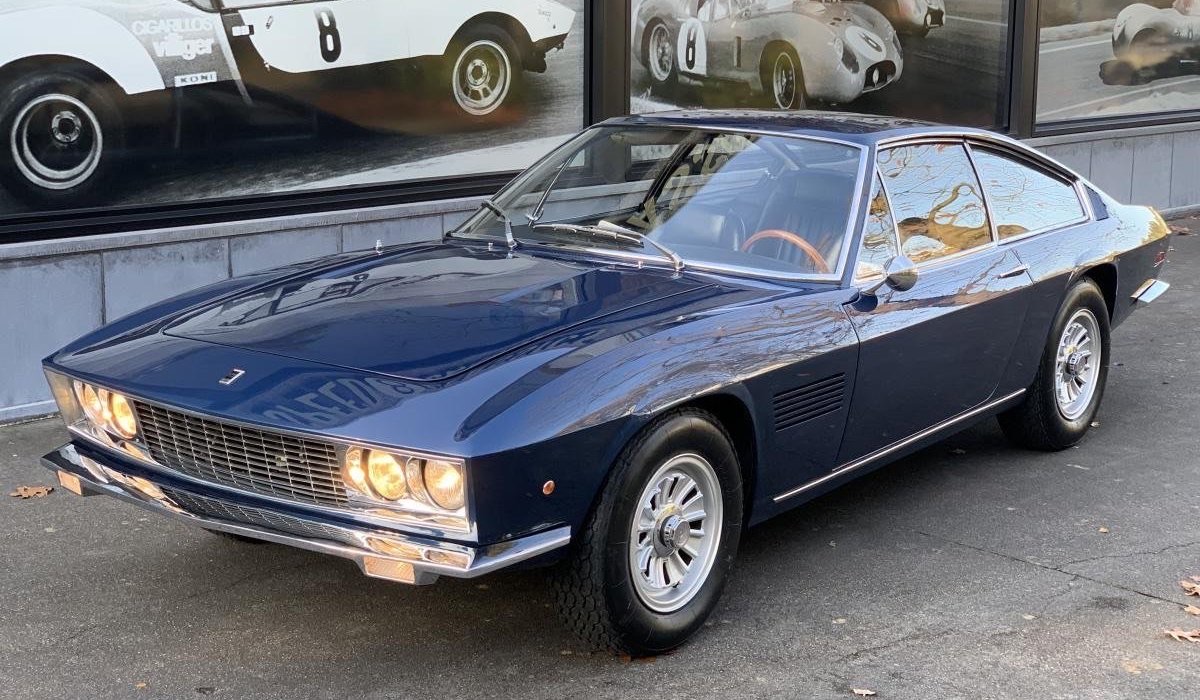 With a chassis and engine from the Dodge Challenger wrapped up in an elegant European GT’s body, the Monteverdi 375 L High Speed was very much the choice of the continental Gentleman Thug of the 1970s
© Speed 8 Classics

Like Spain, Switzerland isn’t the first country that springs to mind when it comes to making performance cars, or any cars at all really. However, the Monteverdi 375 L High Speed was just that. Created by Swiss racing-driver-turned-auto-maker Peter Monteverdi, the 375 L High Speed was designed to go toe-to-toe with period British GTs such as the Jaguar E-Type and aesthetically similar Aston Martin DBS. Inside, the Swiss machine could match the British cars for style thanks to swathes of luxurious wood and sumptuous leather which was most likely sourced from Alpine trees and cows. Probably. Unlike its British rivals, 375 L High Speed was also a straight up muscle car thanks to the chassis and thunderous V8 sourced from the Dodge Challenger. 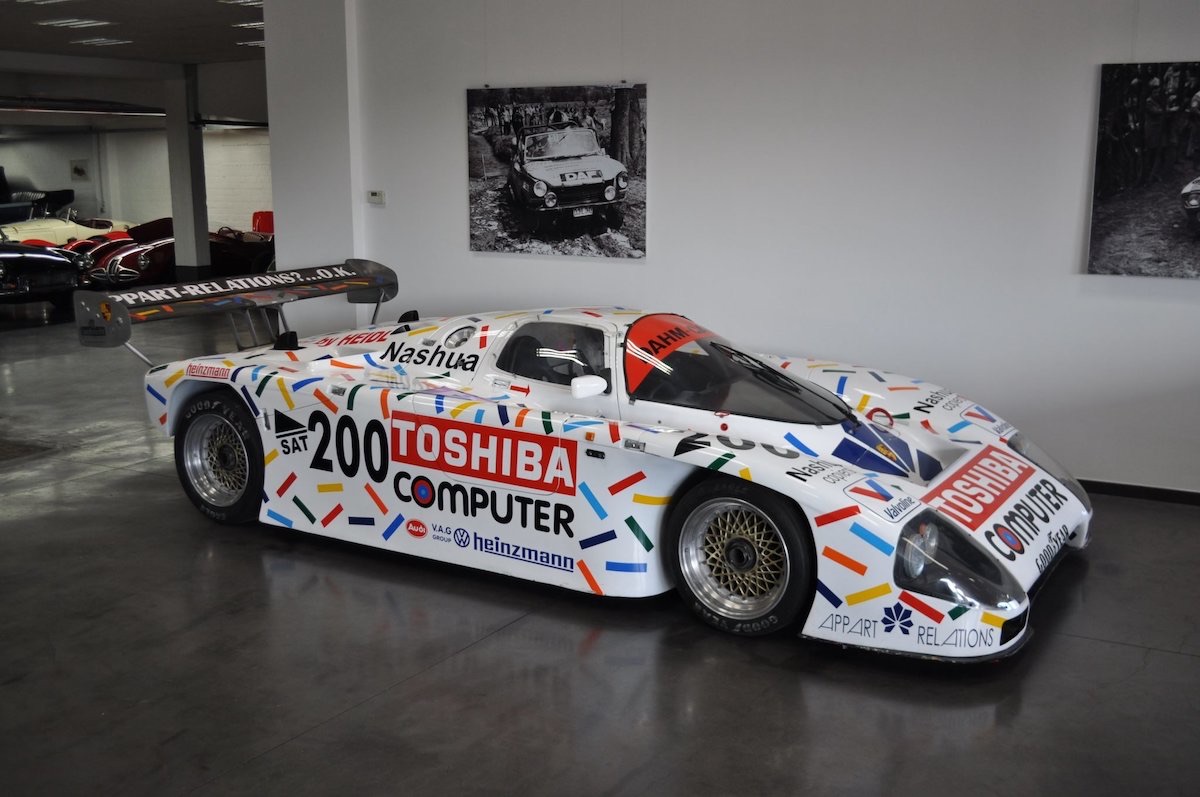 The Porsche JM19 was the British Argo team’s vision of how a Group C Sports Car should be. Powered by Stuttgart’s devastatingly effective 3.2-litre flat-six motor, this very car competed at Le Mans in 1986 and selected events in the 1987 World Sports Car Championship including a return to La Sarthe. According to DailySportscar, Group C cars such as the Porsche JM19 are highly prized in classic racing thanks to their ease-of-driving and historical significance.