Had Your Brave Pills Today? Then This 1995 Maserati Ghibli BiTurbo Could Be The Youngtimer Classic Car For You! 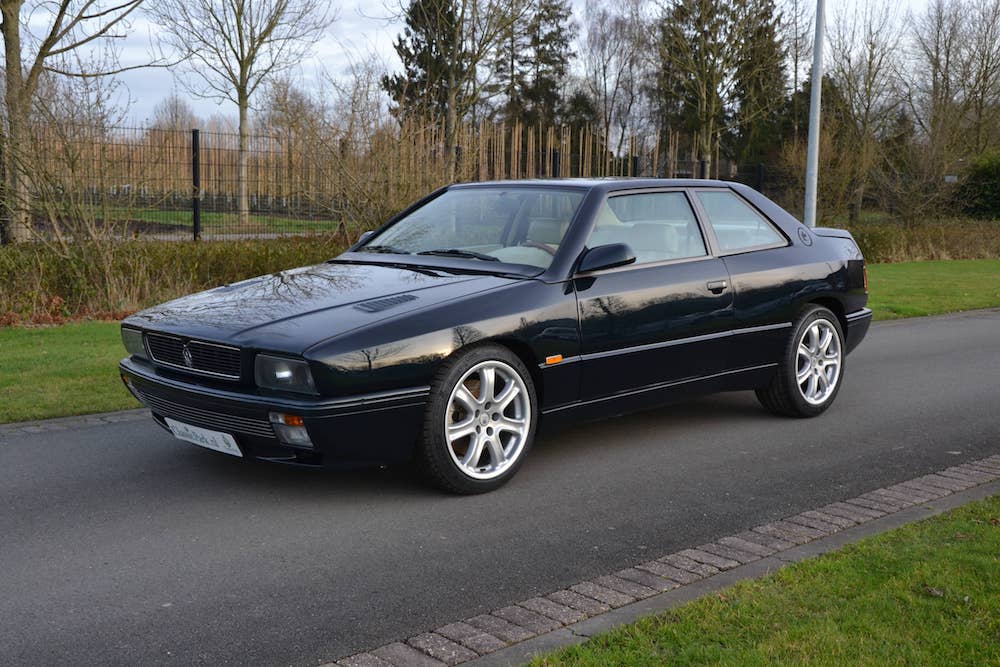 For us at Dyler, the 1990s were a golden era for the automobile. Sure, cars weren’t as technologically advanced as they are now, but for the most part, they certainly were not as generic and overstyled as cars these days.

Cars from the 1990s exuded a speci kind of cool, which is seldom found in 2022. We’re talking about legendary machines such as the BMW E34 M5, the Mercedes W124 AMG models, the Audi S8 Typ 4D, and this - the Maserati Ghibli. 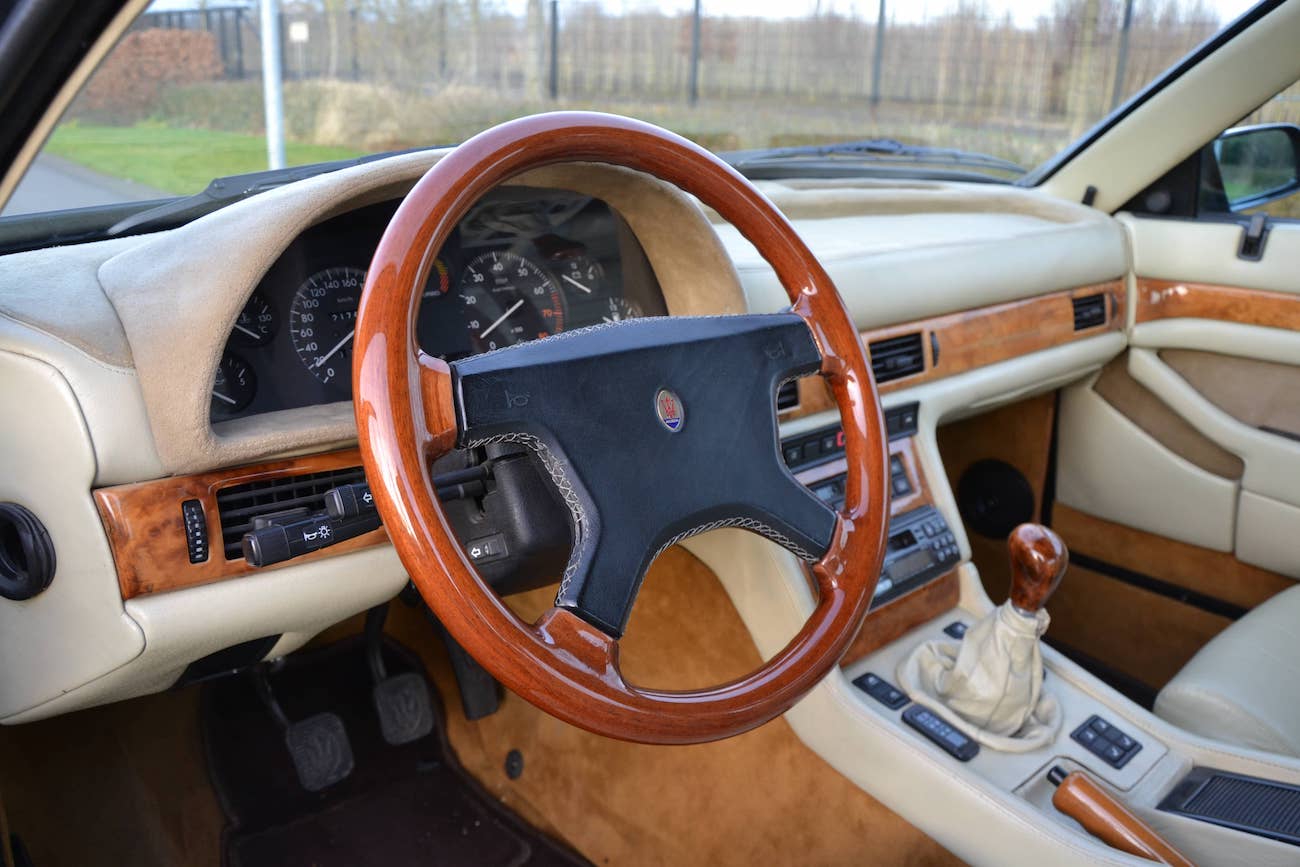 Alongside that rather lovely Gandini-styled body, the second-generation Ghibli was one hell of a performance car that came at a time when Maserati was struggling massively financially.

Whilst not perfect, the Ghibli shouldn’t be as enjoyable as it is. It is a testament to what can be done when petrolheads - and not accountants - come together to make the best thing they possibly can in spite of the adverse circumstances they face.

For that alone, the second-gen Ghibli has won our hearts. Bravo, ragazzi…

Why did Maserati name the Ghibli the Ghibli? Does it mean “giblets” or perhaps even “goblin” in Italian? 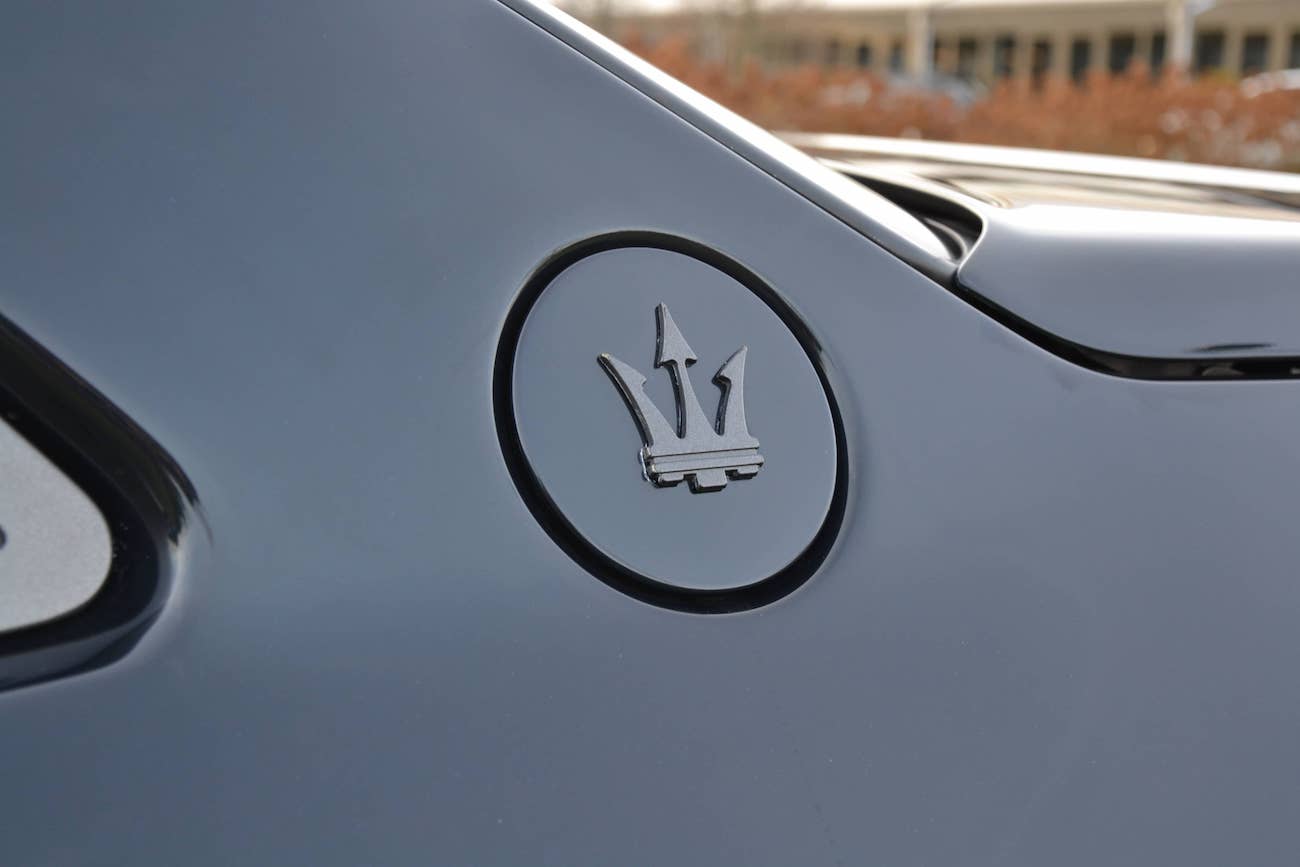 Unfortunately, no. Ghibli means neither “giblets” nor “goblin”. Given Maserati’s proclivity to name its car after different types of wind, Ghibli is the Libyan Arabic word for a hot, dry, southwesterly wind exclusive to the Libyan desert. The Ghibli moniker is also one of the longest standing names in Maserati’s history, and can be traced back to 1967 with the first-generation car. The first Ghibli (codename, AM115) was a V8-powered GT which was produced from 1967 to 1973. The gen two car (AM336), the focus of this story, was a V6-engined luxury coupé made between 1992 and 1998. After a hiatus of 15 years, Maserati revived the Ghibli name in 2013 for its executive sedan, which is aimed at people who don’t want a BMW 5 Series or a Mercedes-Benz E-Class.

A few aesthetic differences aside, this Ghibli looks a lot like the Maserati Shamal. Are they related in any way? 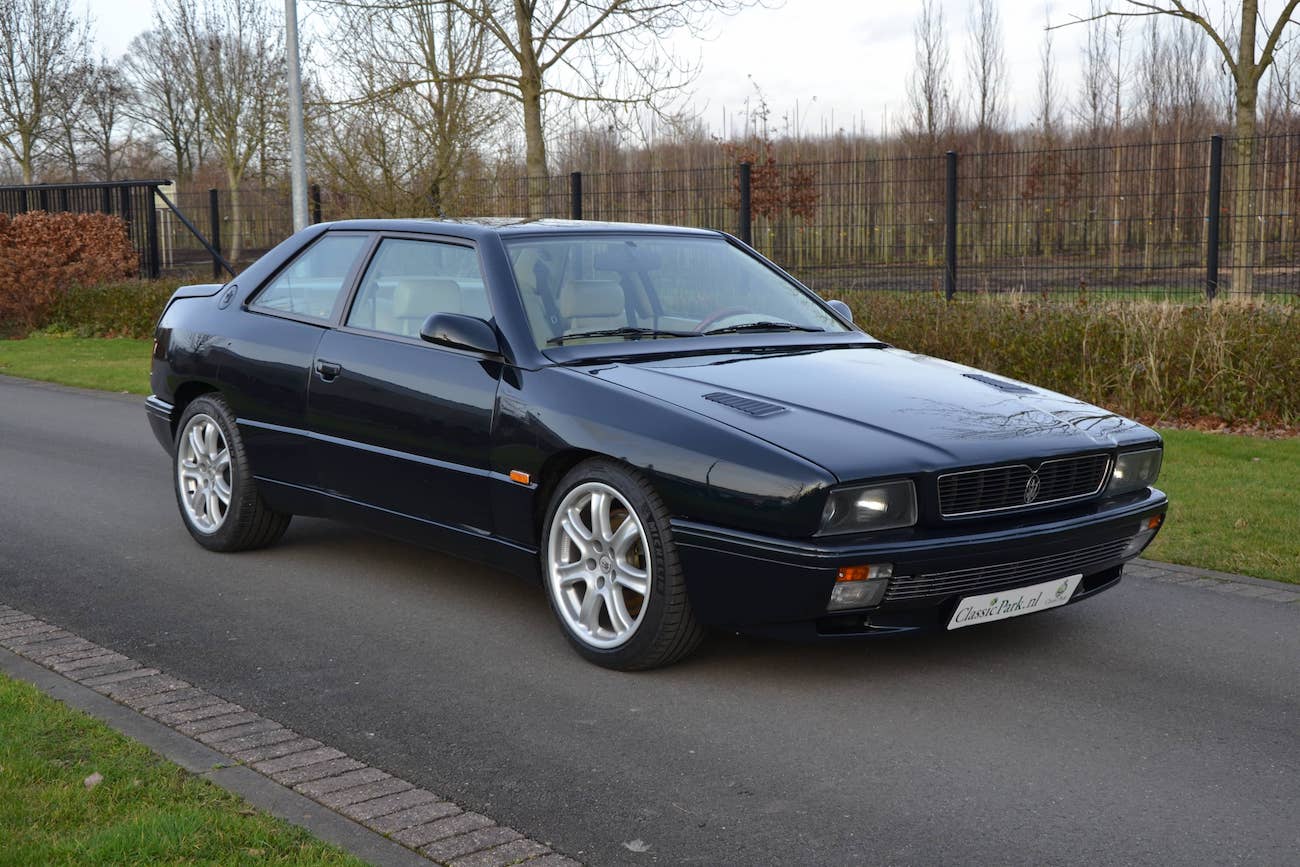 Yes. The Shamal and the Ghibli are related to the Biturbo because Maserati was financially in trouble at the time both cars came out and things were a case of maximising resources until FIAT purchased the company in 1993. The Ghibli, Shamal, and later Biturbo were also designed by Marcello Gandini. The Italian design maestro’s brush can be seen through the sharp angles on the body work of all three cars. The Shamal, however, was Maserati’s flagship and had a 3.2L twin-turbocharged V8 instead of the V6 found in this car.

Does the ‘Biturbo’ designation in this Ghibli’s name mean this second-generation car has a twin-turbo V6 engine? It’s not a diesel, is it? 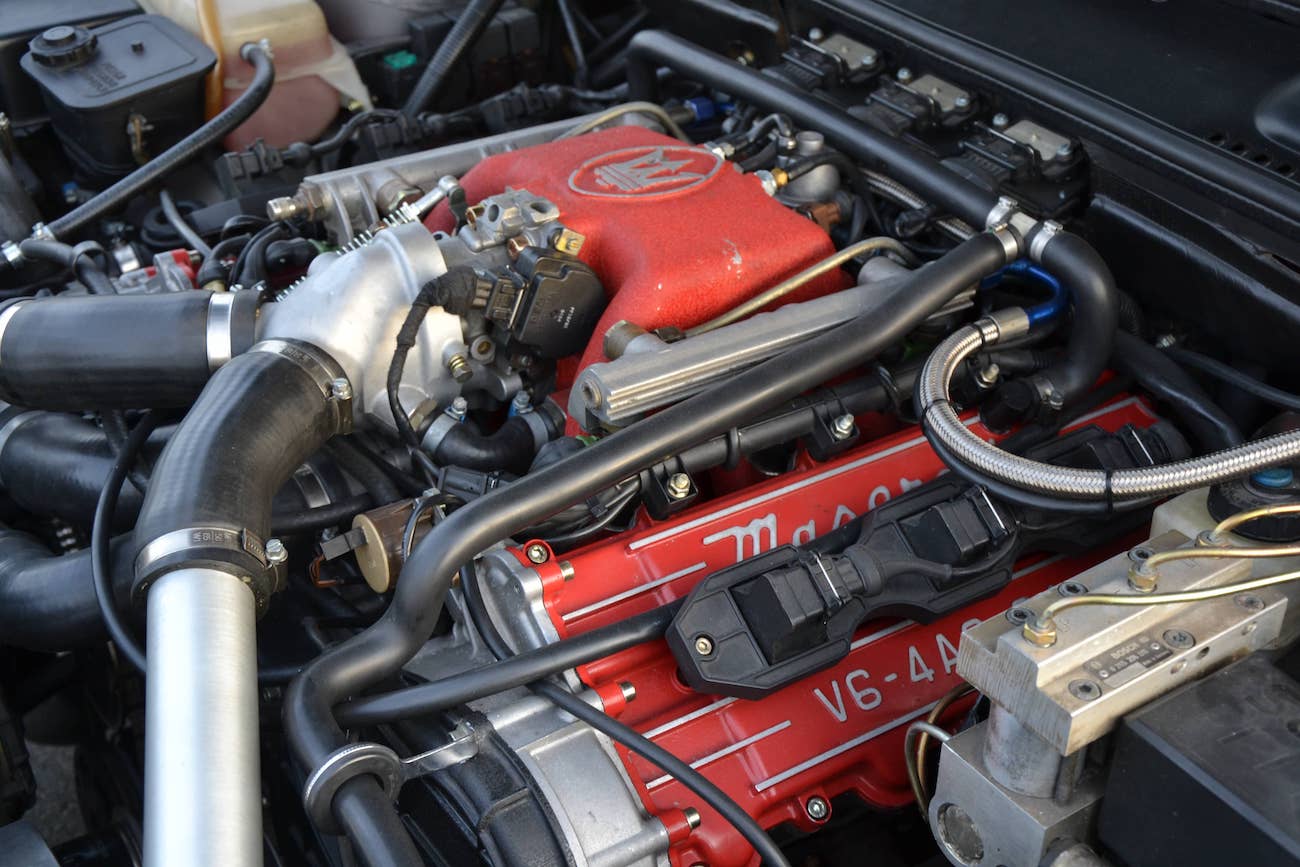 The twin-turbo 2.8L V6 engine in this Maserati Ghibli produces 280bhp and a top speed of 155mph
© Classic Park

That’s right, yes. All second-gen Ghibli have a twin-turbo V6 unit. The origins of these engines can be traced back to the Maserati Biturbo. Ghibli made for the Italian Domestic Market come with a 2.0-litre motor and a six-speed manual gearbox. Cars made for export such as the one you’re looking at here are fitted with a 2.8L V6 and a five-speed manual. Oddly, the smaller motor is the more powerful of the two with 302bhp, a maximum speed of 158mph, and a 0-62mph time of 5.7 seconds. That said, the 2.8 is no slouch with 280bhp, a top end of 155mph, and the capacity to do 0-62mph in 6.0s. If you have a bit of a taste for speed and want even more performance from your Ghibli, then the Ghibli Cup is the one to have. Only 57 of these cars were made, and Maserati managed to extract 335bhp from its 2.0L V6. At the time, the Ghibli Cup boasted the highest specific power output per-liter of any road car; even more than the Jaguar XJ220 and Bugatti EB110. To distinguish the Cup from the standard Ghibli, Maserati tweaked the suspension, added five-spoke Speedline wheels, and full-fat Brembo brakes. Inside, the Ghibli Cup still retained the luxury and comfort of the stock car. However, the “entry-level” Ghibli’s cream connolly leather made way for black, the burr wood trim was replaced with carbon fiber, the regular four-spoke steering wheel made way for a three-spoke Momo unit, and aluminum pedals could be found in the driver’s footwell. Yes, there is a V6 diesel Ghibli, but it wasn’t introduced until the launch of the second-generation of the car. Nothing to worry about here.

Will this era of Maserati Ghibli end my marriage and cause me to go bankrupt? 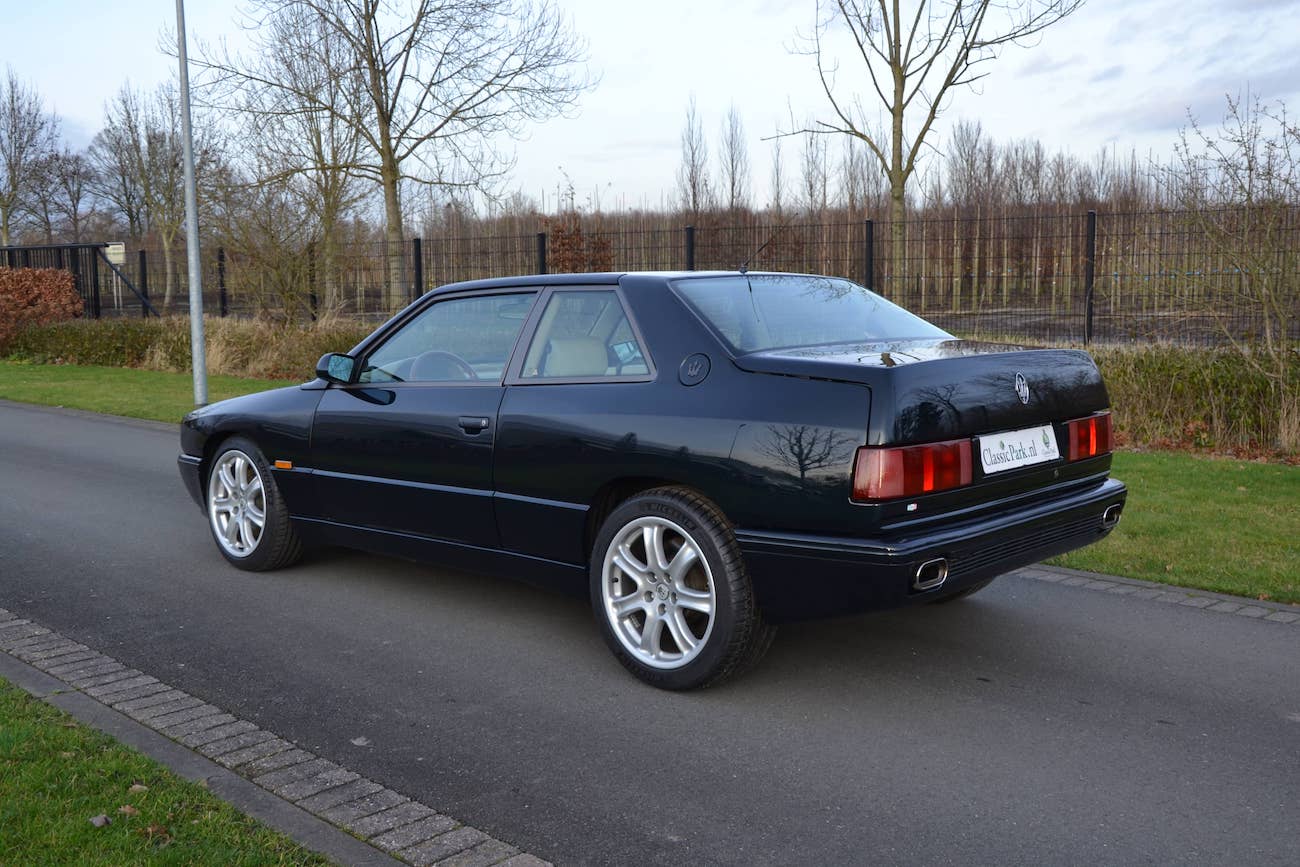 hroughout its life, the Maserati Ghibli has been a GT, an executive sedan, and a two-door coupe - the latter is the car you see here
© Classic Park

No, not really. As with any classic or youngtimer car, do follow the golden rule of “buy the best you can afford” otherwise your car will become a money pit, your spouse will leave you, and you’ll go bankrupt. The Ghibli is no exception to this rule. In accordance with advice from Classic Park, after every 10,000 kilometres you cover in your Ghibli, then book it in for a small service. After each 20,000km, it will need a full service. A new timing belt will be needed after 40,000km, and a camshaft change will be required following a further 80,000km. Furthermore, it is worth keeping an eye on the Ghibli’s twin turbos. These can wear out quite quickly if not properly warmed up. To ensure you don’t need to replace your turbochargers sooner than later, the best thing to do is let the car idle for 10 minutes upon start-up and for 10 minutes after a drive. If the car is billowing blue smoke, then a turbocharger change is required. As always with these types of cars, keep an eye on it, treat it with the love it deserves, and you’ll have years of happy motoring together.

If I decide that I want to buy this Ghibli, does it come with the classic Maserati clock on the dashboard? 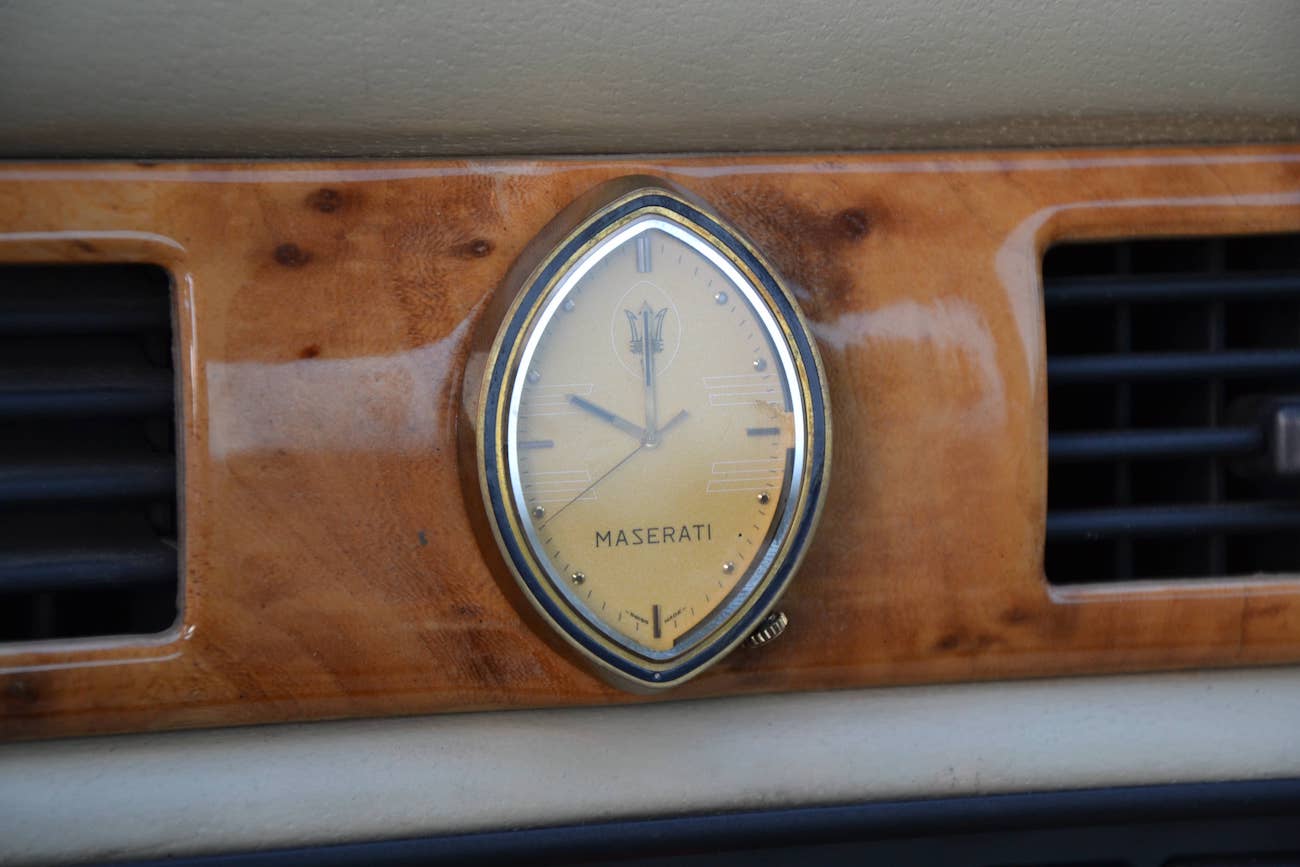 Yes, absolutely. It wasn’t until the 3200GT replaced the Ghibli in 1998 that Maserati stopped fitting the classic clock to its cars. The clock found in these cars was made by Swiss watchmaker, Lasalle. Maserati still fits the analogue clock to its latest generation of the Ghibli because of traditions. However, they are not made by Lasalle.

Ultimately though, why should I buy a second-gen Maserati Ghibli? 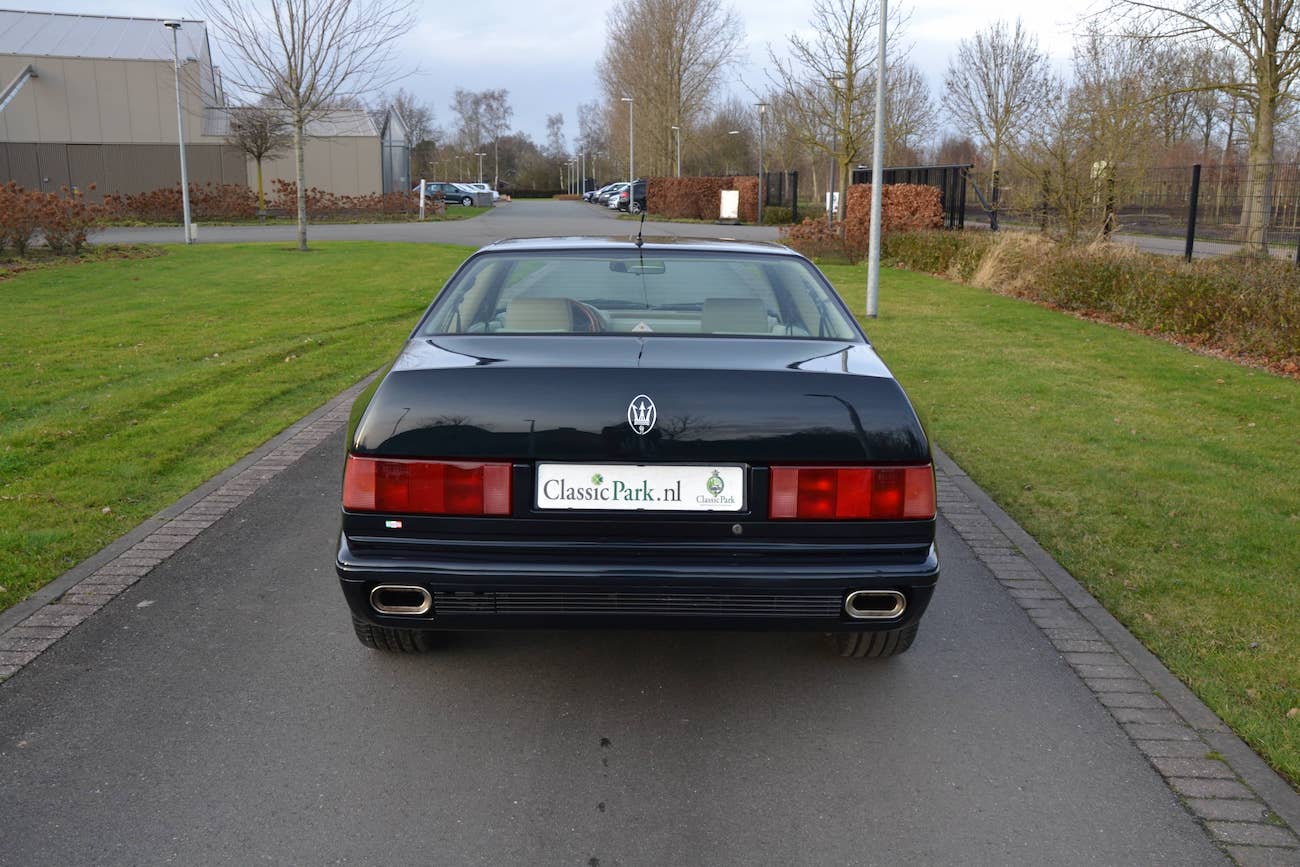 Only 2,337 of Maserati Ghibli were made - exclusivity is probably one of the biggest reasons you need to buy one… as is the twin-turbo V6… and the Gandini designed body
© Classic Park

Because the Maserati Ghibli is a very Italian thing. It’s sporty and stylish without being aggressive. It’s ‘90s Italian sprezzatura at its very finest. It’s a very rare performance car in a tailored suit. Only Italy could make a car like this.

A special thanks to Classic Park for allowing us to use this stunning 1995 Maserati Ghibli they have for sale for this feature. To take a look through their entire catalog of classics and youngtimers, click these three words.

Interested in owning a Maserati Ghibli? Click here to browse through all of the Ghibli we have listed for sale on Dyler.