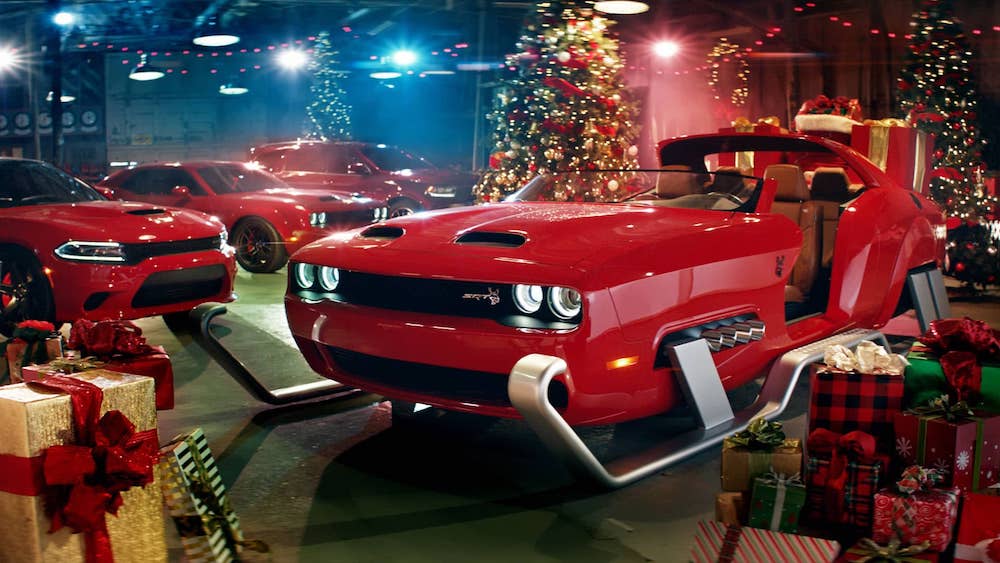 It wouldn’t be the festive season without a list of automotive-themed gifts, would it?

Amidst a year in which war has broken out in Europe, the threat of a global nuclear conflict has once again reared its ugly head, and most of the Western world faces both a cost of living and energy crisis, you’ve made it to the end of 2022. Give yourself a pat on the back for that.

Despite the s**tshow than has been this year, at least it’s now the festive season so we can spend some time with family and friends before we head into 2023 with a sense of renewed vim and vigour. That, of course, is if we’re not all blown to bits during the next several weeks before the new year.

On a more cheerful note, we at Dyler.com have noticed that there’s usually at least one car enthusiast in every family or friendship group, and for the most part, they’re all pretty diverse.

If you’re stuck for buying the petrolhead in your life something for Christmas, we’ve created this list of Car Person-Friendly gifts which caters to all budgets, and includes everything from motorsport-inspired socks and Sebastian Vettel’s ‘Save The Bees’ t-shirt, to a Rolex Daytona and a downsized, drivable version of James Bond’s Aston Martin DB5 courtesy of The Little Car Company. 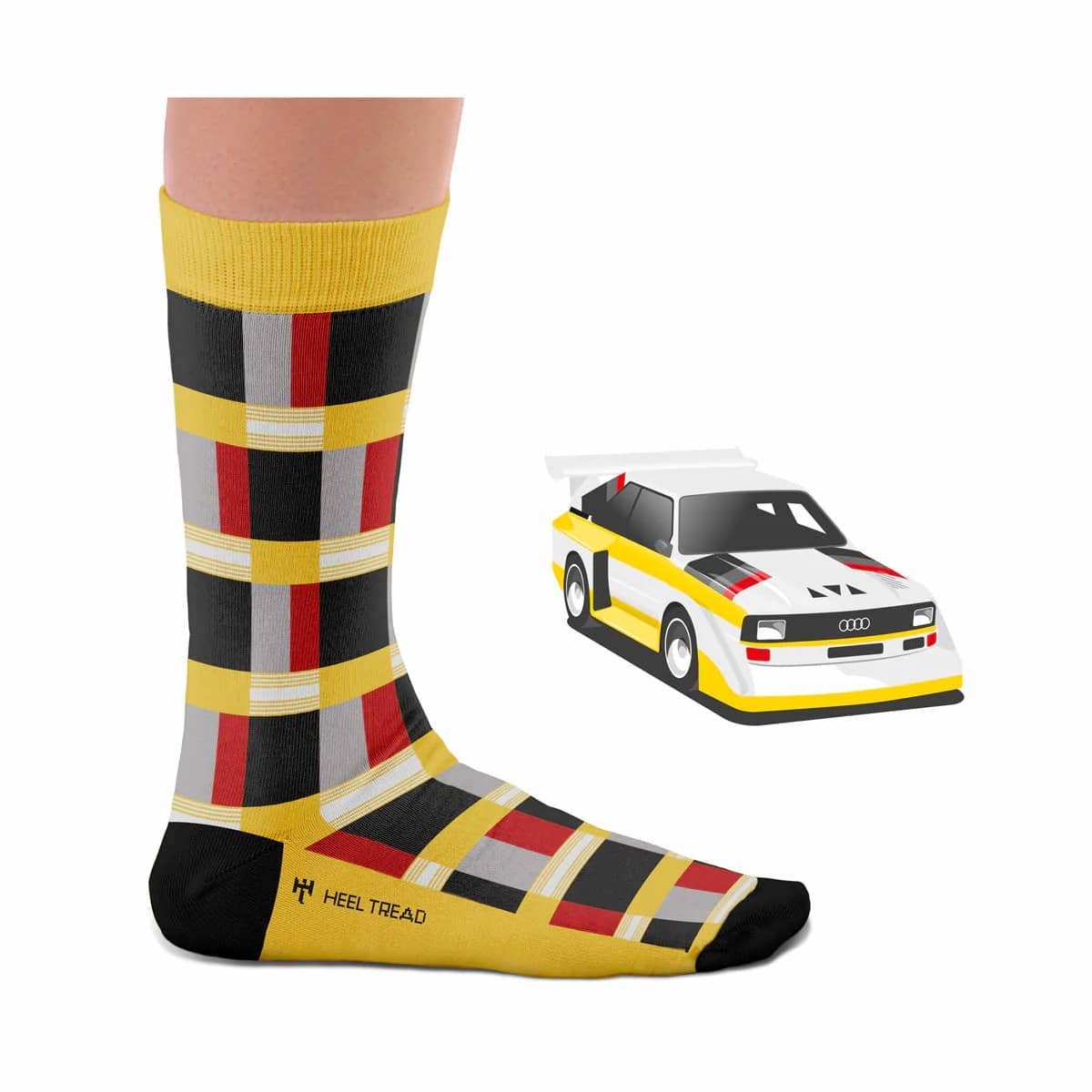 
It’s the festive season, and no festive season would be complete without getting a new pair of socks. Or underwear to replace your current pair that has holes in. Thankfully though, the socks are a far cry from the tat from the market that a distant relative would send you. Heel Tread produces socks based on iconic motorsport liveries, including the Audi S1 Quattro, the 555 Subaru Impreza WRC, and the Apple Porsche 935. If you’re a plane geek AND a petrolhead, the brand also offers socks inspired by the camouflage schemes of World War II fighter planes.

Automobilist creates tasteful automotive art for all budgets - their website has some good interviews, too
© Automobilist.com

Self-described as a “team of artists [and] creative thinkers”, the Automobilist is a group of car enthusiasts who - amongst other avenues - express their love for all things four-wheels via art. The artwork created by the Automobilist community has a sharp, contemporary, appearance and everything is inspired by legendary classic cars and some of the most iconic drivers and liveries from the world of motorsport. Best of all, none of their really rather tasteful art will break the bank, either. 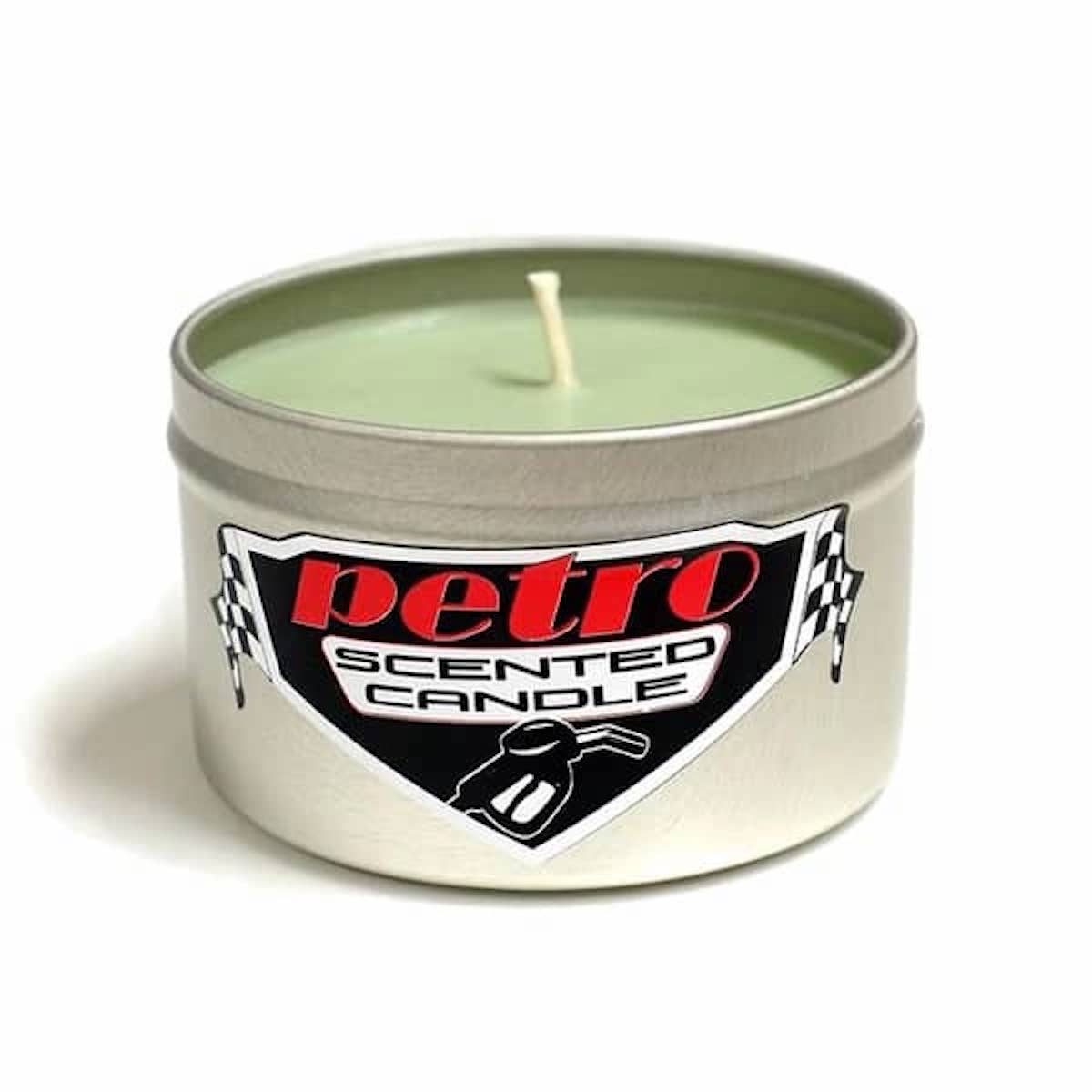 This candle will make your house smell like a BP Station - no bad thing, as gasoline is a heavenly scent
© Car.Cards

Along with freshly-baked bread and a lawn mowed anew, the smell of petrol is one of the greatest scents on God’s earth. Thanks to the good people at Car Cards, now you can recreate the heady aroma of your local filling station in the comfort of your own home with their petrol-scented candle. Just check with those you live with if they’re happy for the place to smell like Gasoline Alley. 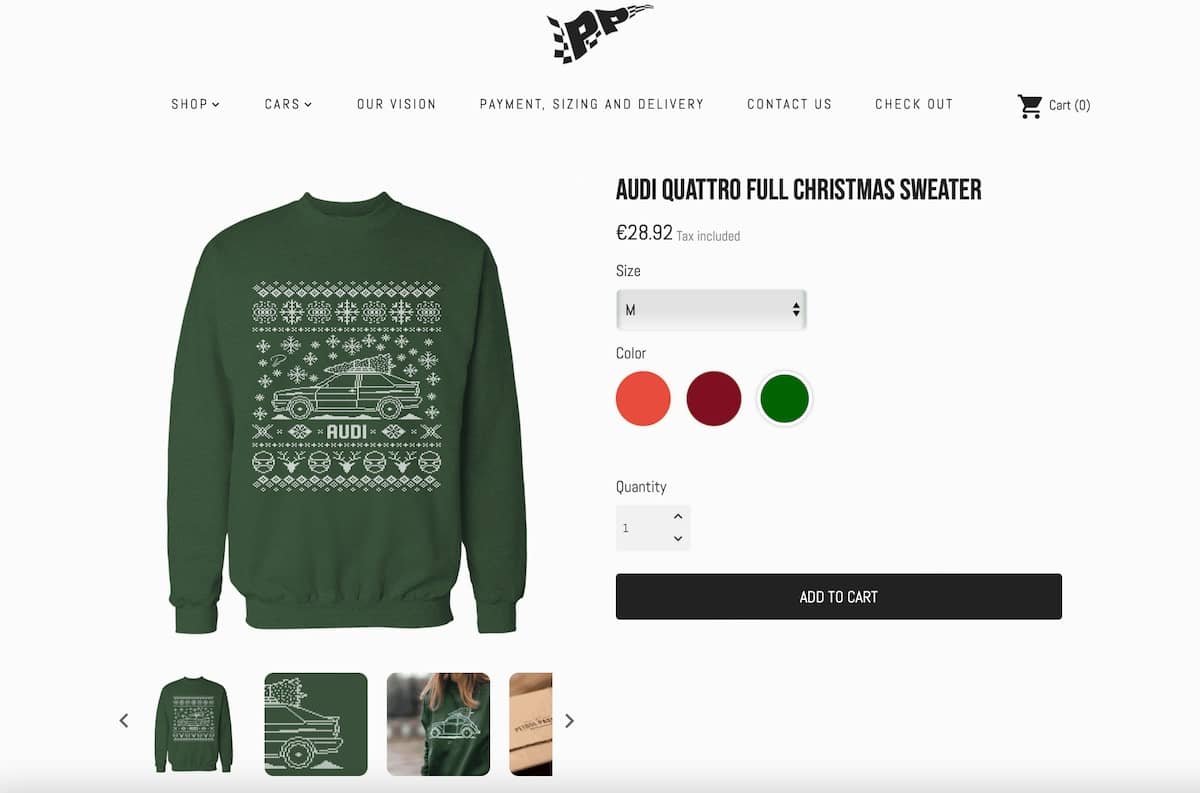 
Petrol Passion is a small Lithuanian automotive-inspired brand specialising in lifestyle apparel and artwork. Most of their products are vaporwave-inspired, but this year, the small, dedicated team has decided to put its own hand-crafted take on the trad ugly Christmas jumper by offering a selection of festive apparel finished with some of the most-beloved youngtimers in the classic car world including the Audi ur-Quattro, the BMW 2002, the original MINI, and the Chevrolet Corvette C4. 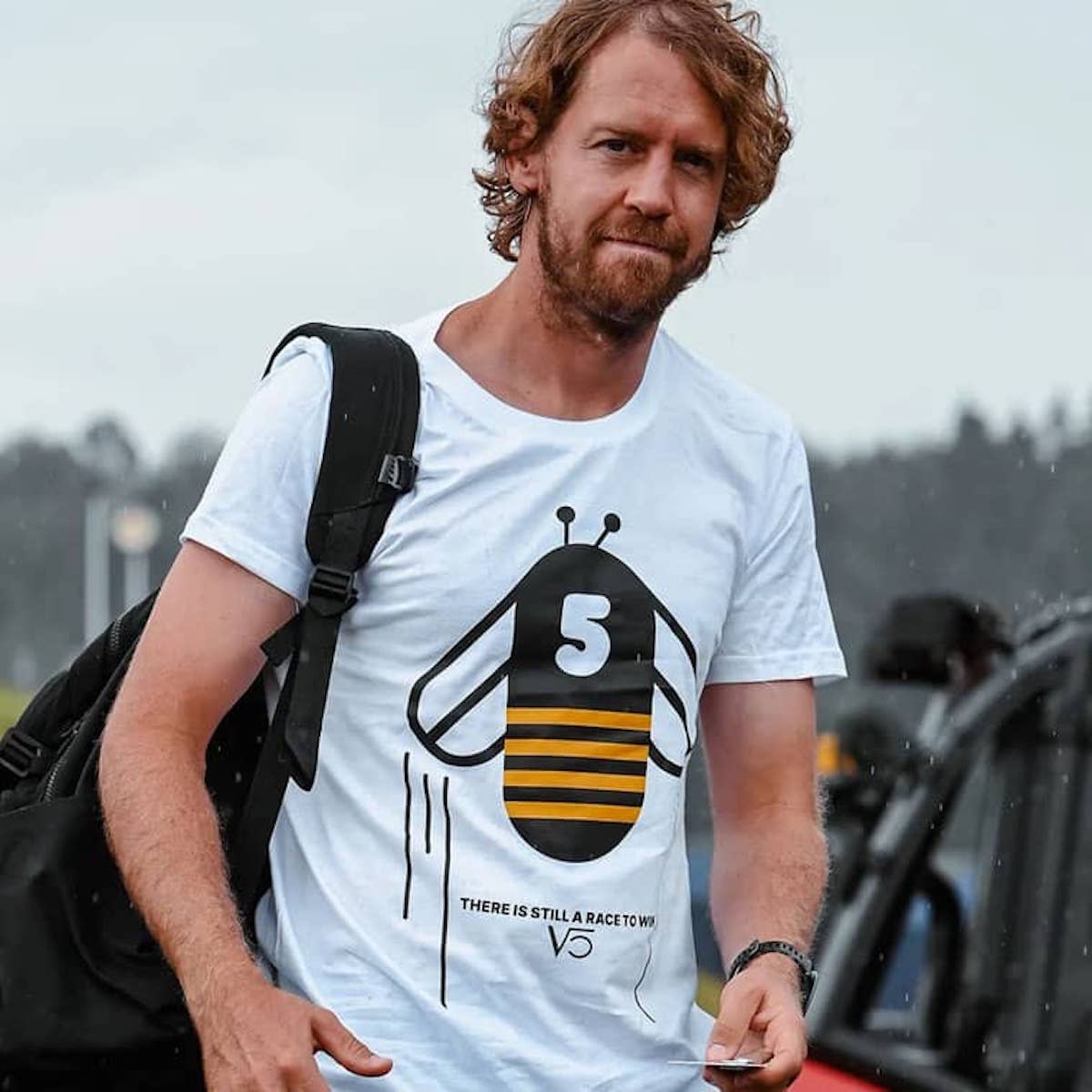 Sebastian Vettel’s ‘Save The Bees’ t-shirt is now available to buy, with all proceeds from the purchase going to various bee conservation and apiculture projects
© SebastianVettel.com

Given the limitations of his Aston Martin machinery, Sebastian Vettel wasn’t able to make as big an impact on the race track as he would have liked during the final years of his Formula 1 career. However, that relative lack of results didn’t stop him from using his voice to back causes he believes in away from the world of F1. A keen environmentalist, one of Seb’s newly-found passions was his love for bees and bee conservation. His love for apiculture was highlighted with his ‘Save The Bees’ t-shirt; a design which quickly gained a cult following amongst his fans. Other t-shirt designs worn by Vettel included ‘Same Love’ and ‘#Race4Women’. These handmade garments are now available for sale on SebastianVettel.de, with all proceeds going to a related organisation or project linked to the cause outlined on the t-shirt. 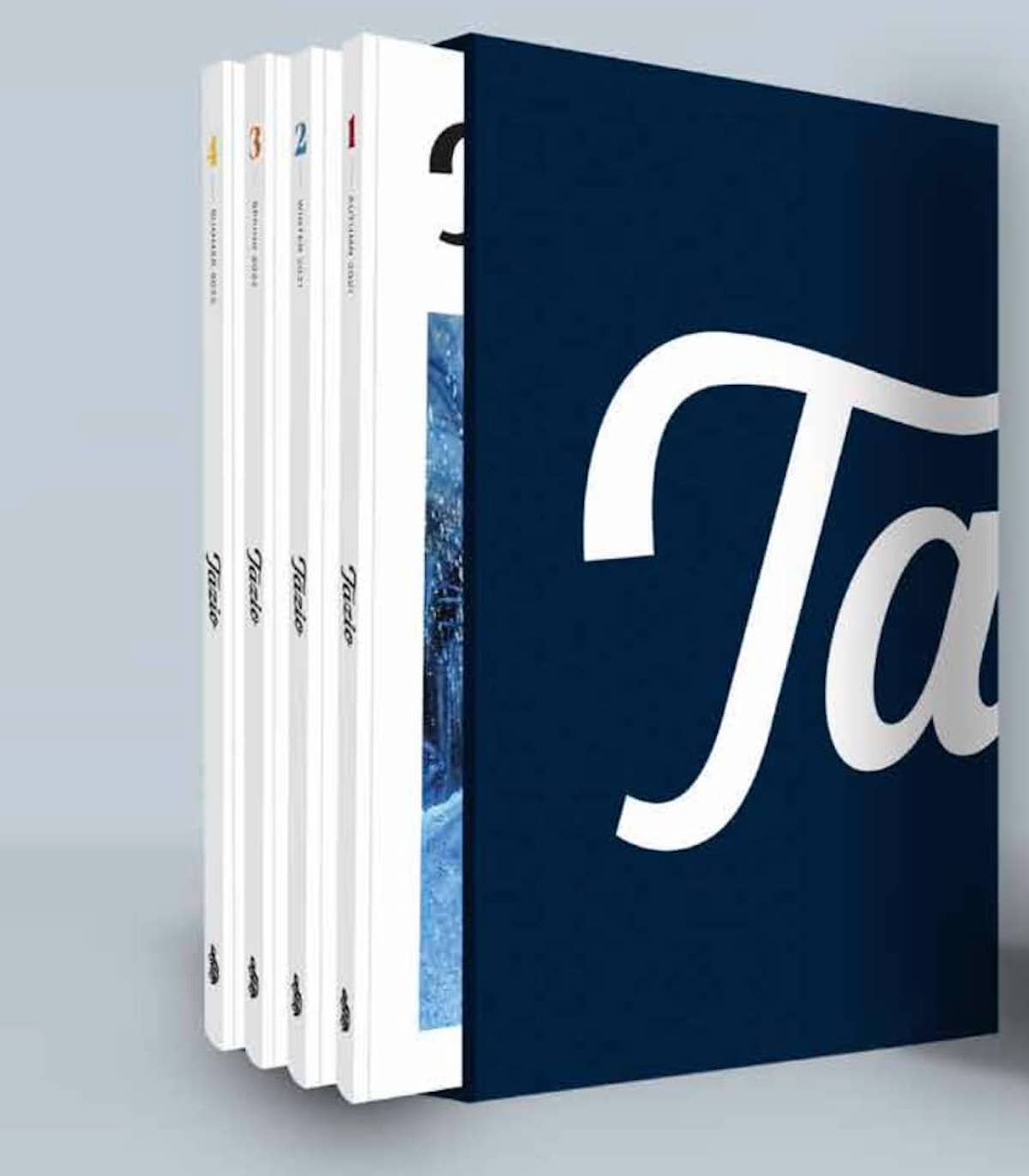 One of our go-to places for ‘slow read’ journalism, Tazio is a high-end print publication that covers the last 100 years of motorsport. The magazine is printed four times a year on premium quality Condat Mat Perigord paper, which allows the publishers to reproduce all photography used to its original standard. What’s more, the 115 gram weight of the pages has a satisfying flick as you immerse yourself in some of the greatest motorsport stories and visuals from over the last century.

Alongside being an engrossing read, Tazio is also a seriously pretty magazine - issue 5 scooped the award for the Best Automotive Magazine Cover at the Sleeping with Art Award in 2022, and each volume has a cover specially designed by industrial designer and artist, Rafael Varela. Copies of Tazio are available individually or as a one-year subscription through the website. Pour yourself a drink, get comfortable on the sofa, and prepare to lose a few hours amidst the great and the good of international motorsport. 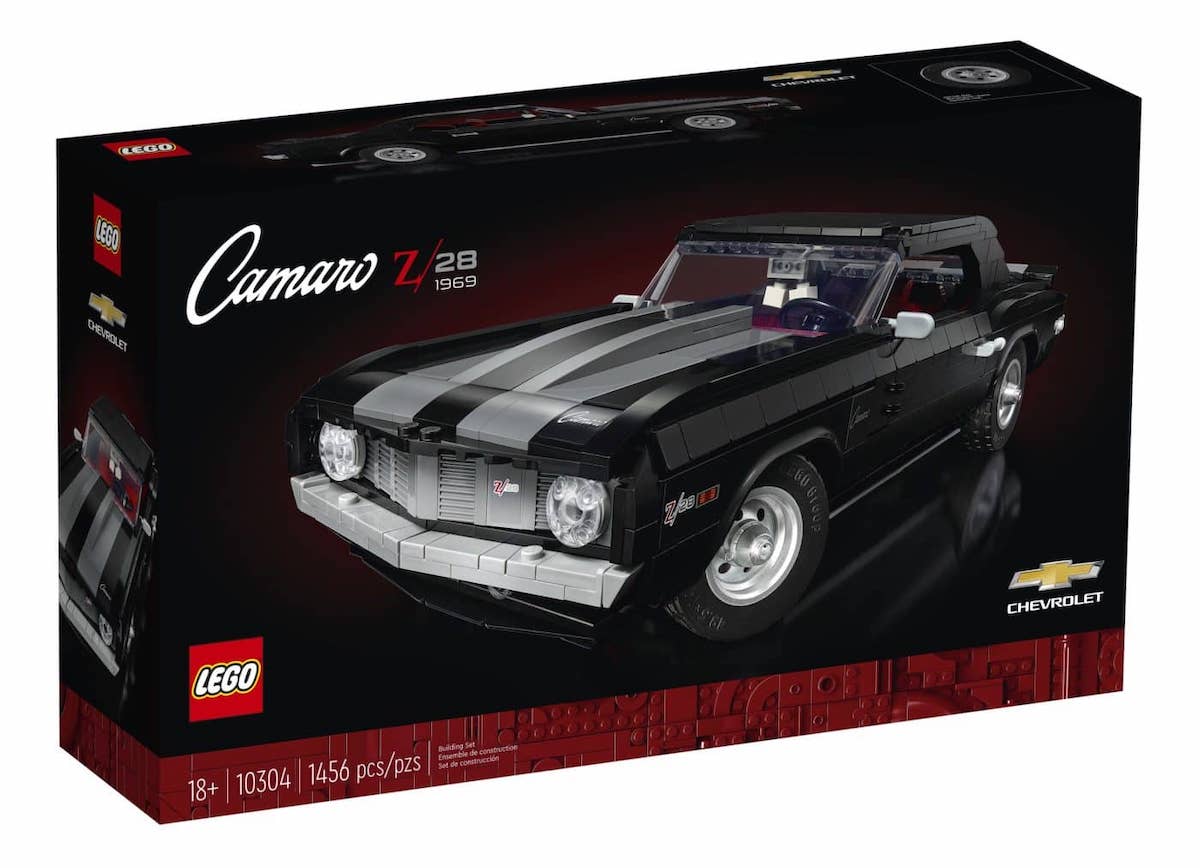 The Camaro Z28 is the latest in a long-line of classic cars from Lego
© Lego.com

Fact: Lego always makes an excellent gift whether it’s Christmas or not. However, given most of you who read Dyler.com are big fans of the V8 American muscle car, it makes sense to include the all-new Lego Creator Camaro Z28. Comprising 1,456 pieces, the car measures 36 centimetres long and 14cm wide, so it’s got some significant weight and presence. In true muscle car style, it can also be modified to your liking - you can choose to build your car as a hardtop or a convertible, opt in for grey or red ‘go faster’ stripes, and as per the original Camaro Z28 SS from the late 1960s, select covered headlamps to give your car a meaner aesthetic. What’s more, the model has several functional components including working steering, opening doors, and moving engine parts. If for some reason the Z28 isn’t your thing, Lego also offers a Creator version of the classic air-cooled Porsche 911, which is equally as enjoyable. 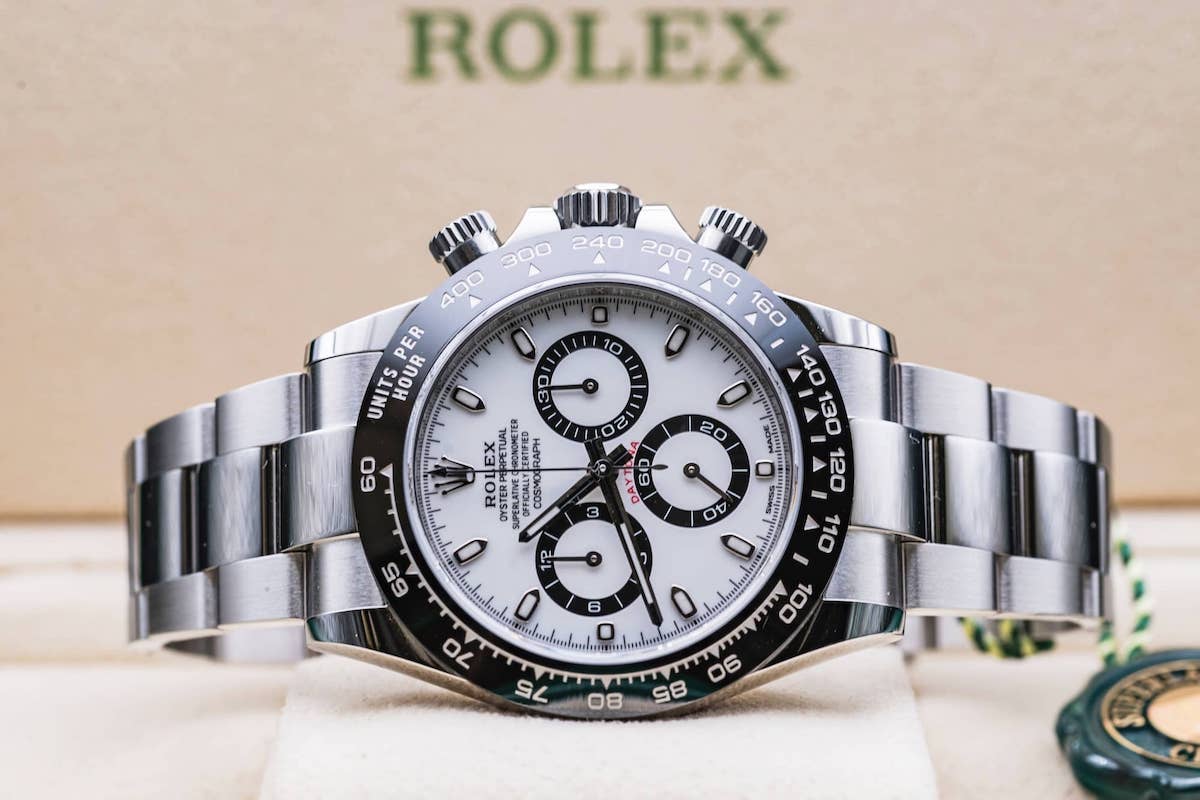 When it comes to establishing the well-forged link between cars and watches, few timepieces do it better than the iconic Rolex Daytona
© WatchCollecting.com

There’s an intrinsic link between the world of watches and cars, and that connection is perhaps best outlined by the Rolex Daytona; a watch introduced by The Crown when it took over the title sponsorship of the Daytona International Speedway in 1963. Since its launch, Daytona has only been available as a chronograph, but there are plenty of configurations and finishes available including stainless steel, 18K white gold, and even a dial forged from meteorite. Given its connection with the Daytona circuit, these watches are also awarded to the winners of the 24 Hours of Daytona - an annual endurance race that rivals the 24 Hours of Le Mans for prestige. It is almost impossible to purchase a Daytona directly from Rolex, and even if you are one of the lucky few who can, you’ll be waiting years to receive your watch, such is the waiting list. If you are interested in owning one of these iconic timepieces sooner than later, we would advise checking out an authorised auction site such as WatchCollecting.com to see what they have listed. 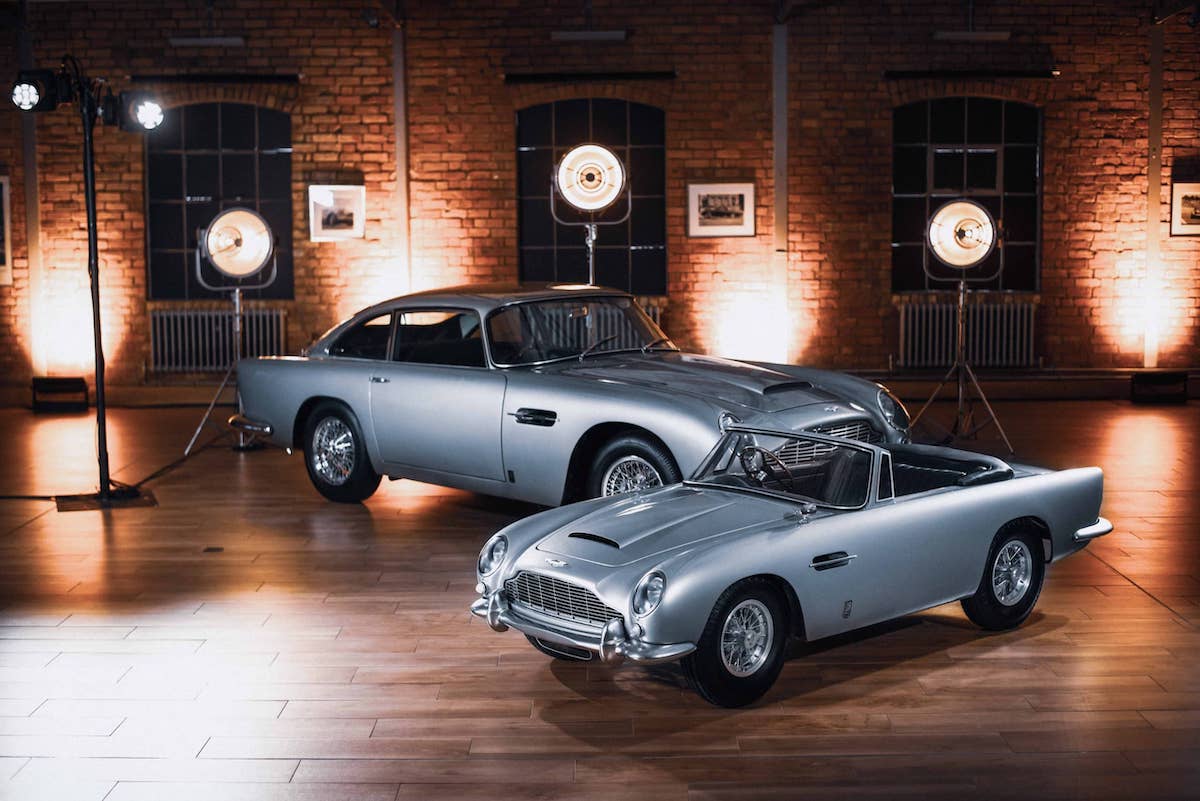 The Little Car Company based in Oxfordshire specialises in crafting scaled-down versions of famous classics such as the Bugatti Type 35, the Ferrari 250 Testa Rossa, and the car you see above - the Aston Martin DB5. All of these mini machines are finished to an unbelievably high standard, and each model is created with the blessing of their original manufacturer. The DB5 is available in three trim levels - DB5 Junior, DB5 Vantage Junior, and the No Time To Die edition packing mini guns, skid mode, cycling number plates, and skid mode. Each car is driven by an electric motor that produces anything from 5kW (6.7bhp) to 16Kw (21.5bhp) depending on the model. Oh, and don’t worry - whilst these cars are small, the Sunday Times reports they can still accommodate someone well over six-feet tall.

It’s Christmas. You’re an adult, so it’s up to you whether you want to have a drink or not. Just don’t drink and drive, though. Ever. You’re a loser if you do that. 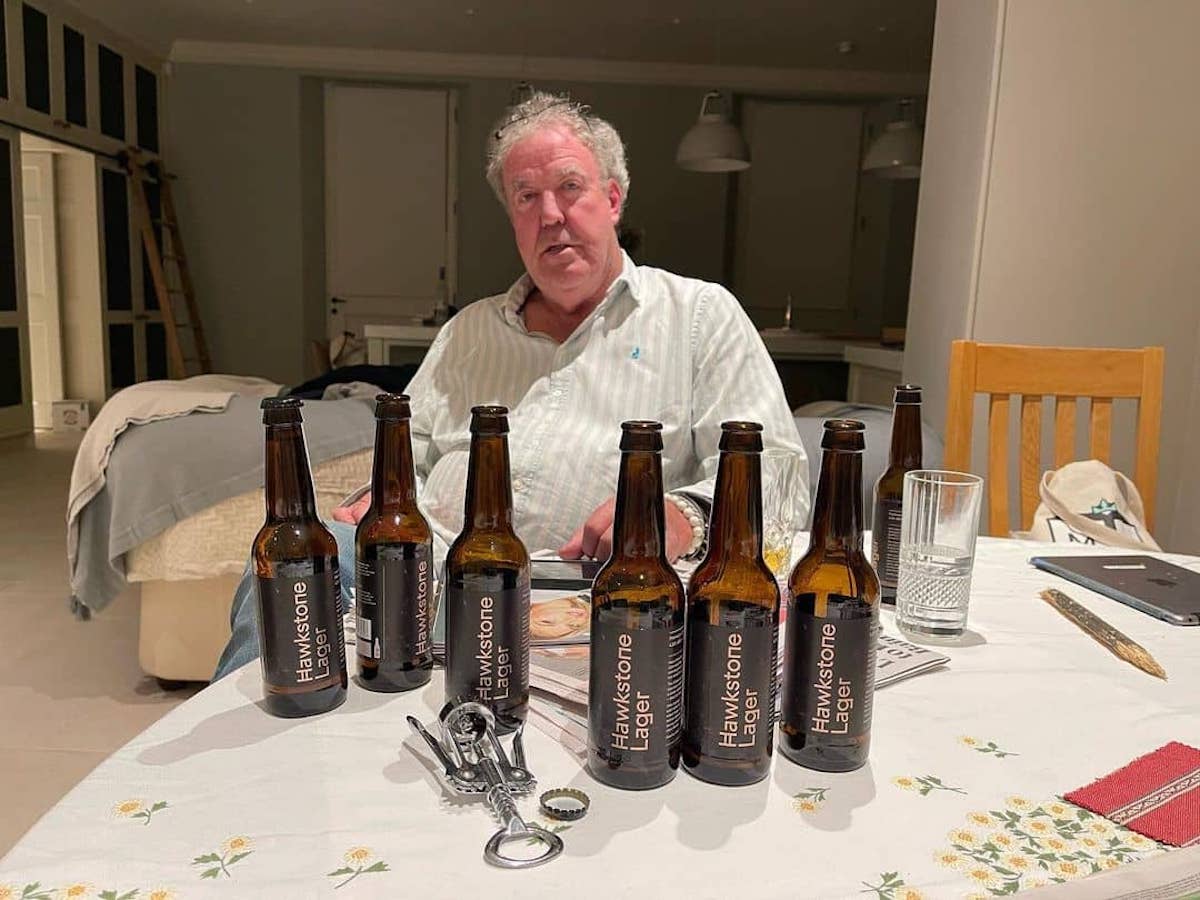 Can Jeremy Clarkson’s Hawkstone Lager lay claim to being amongst the best lagers in the world?
© GrandTourNation.com

It wouldn’t be Car Christmas without mentioning Top Gear/The Grand Tour, so here’s offering number one - Hawkstone Lager, a 4.8% beer brewed using the wheat grown on Jeremy Clarkson’s farm. In the interest of consumer advice, our Editor (who doesn’t really like lager( got stuck into doing an in-depth review of Jeremy’s Juice, and after getting thoroughly reviewed, he happily confirmed that Hawkstone Lager does live up to its tagline of “f*ck me, that’s good.” Hawkstone was front forward with the hops, goes down smoothly, and unlike most lagers, is still more than palatable even when it’s not necessarily ice cold. If lager isn’t your thing, Hawkstone also produces a selection of session beers, an IPA, cider, and even vodka. Like the lager, these are all crafted using sourced from Diddly Squat Farm. 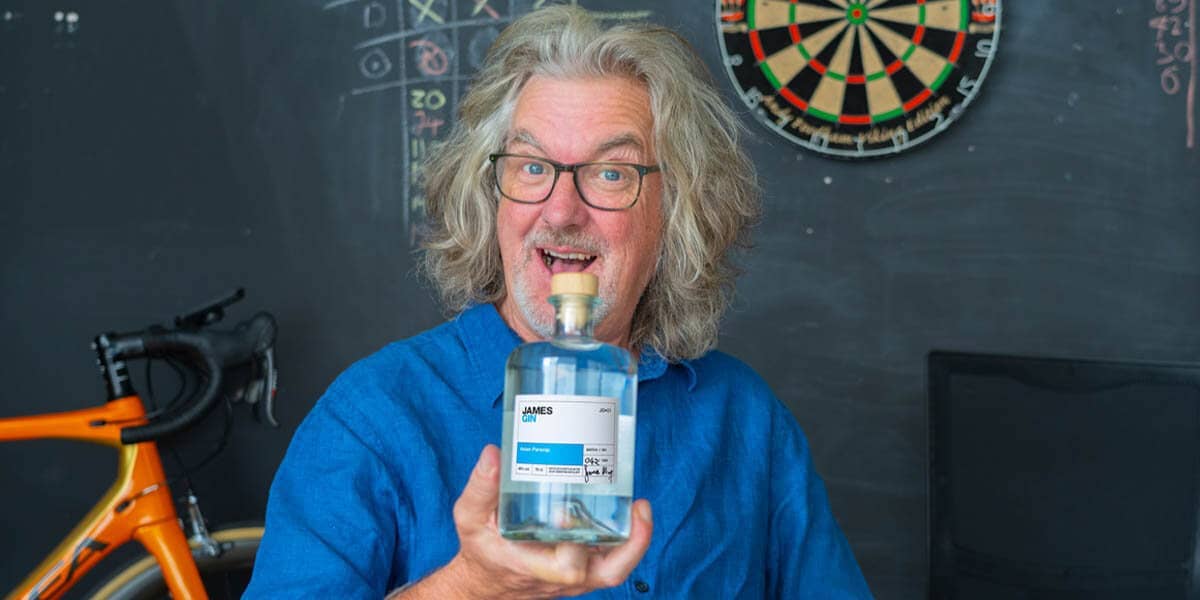 It’s good news, especially if you don’t like lager! Clarkson’s not the only one peddling booze - James May launched his own brand of ‘Asian Parsnip’ gin last year!
© JamesGin.com

Fun fact - Clarkson wasn’t the first of the Top Gear/The Grand Tour trio to venture into the alchemistic and oft-mysterious world of craft alcohol. That accolade goes to James May, who in mid-2021 launched his own brand of gin called ‘James Gin’. The first gin launched was ‘Asian Parsnip’, and was met with widespread approval amongst ginthusiasts. In fact, it even scooped an IWSC silver award earlier this year. The gin is inspired by flavours from May’s native United Kingdom and across the globe. We haven’t tried it (yet!), so here are some tasting notes from the man himself: “Take a sip and you will genuinely experience notes of nutty, sweet parsnip, redolent of the damp soil of the English countryside, and that sparkle of spices that will have thrilled anyone who has travelled in India or South-East Asia, or had a take-away.” If you watch this video, you’ll also see that Asian Parsnip will go well with the traditional Christmas game of chess.


If, however, you want to go all out and buy a new car for Christmas, we’re not stopping you! Click these yellow words to browse through the 40,000+ cars we have listed on Dyler.com.