Arguably, one of the most ambitious projects ever undertaken by Subaru, SVX is now in the margins of automotive history. Technologically advanced premium GT did not sell as well as intended and never received a successor. This white SVX in particular holds a very special place in one enthusiast’s heart and car collection. Robbert has owned this Subaru for two decades, taken it on numerous trips and has no plans to part with it.

SVX name was used to market the car outside Japan, it is an abbreviation for Subaru Vehicle X. The name marked perhaps the most daring attempt by the manufacturer to date – its only global performance luxury coupe. Mind you, at the time Subaru were mostly known for building rugged and dependable utilitarian cars, so it was problematic to sway the public into buying these cars. With prices starting around $25,000 in US, this was at least $8,000 more than any other Subaru on offer and Subaru was still losing money on each car they sold. Even compared to its main competitors, Mitsubishi 3000GT and Nissan 300ZX, the SVX was a definite sales flop.

Initial struggles to sell mean that nowadays SVX has an aura of exclusivity usually associated with much more exotic machinery. This exclusivity is partially due to the stunning looks of this car, which come from the ingenious Giorgetto Giugiaro. In fact, when I first saw this car in Robbert’s garage, I immediately gravitated towards it, despite the fact it shared the room with Tesla roadster, Lancia Fulvia and other exclusive cars. Usually, such bold designs do not make past the concept stage, yet somehow Subaru put it into production. Just look at those fighter-jet-like double side windows or a sleek singular horizontal tail-light! 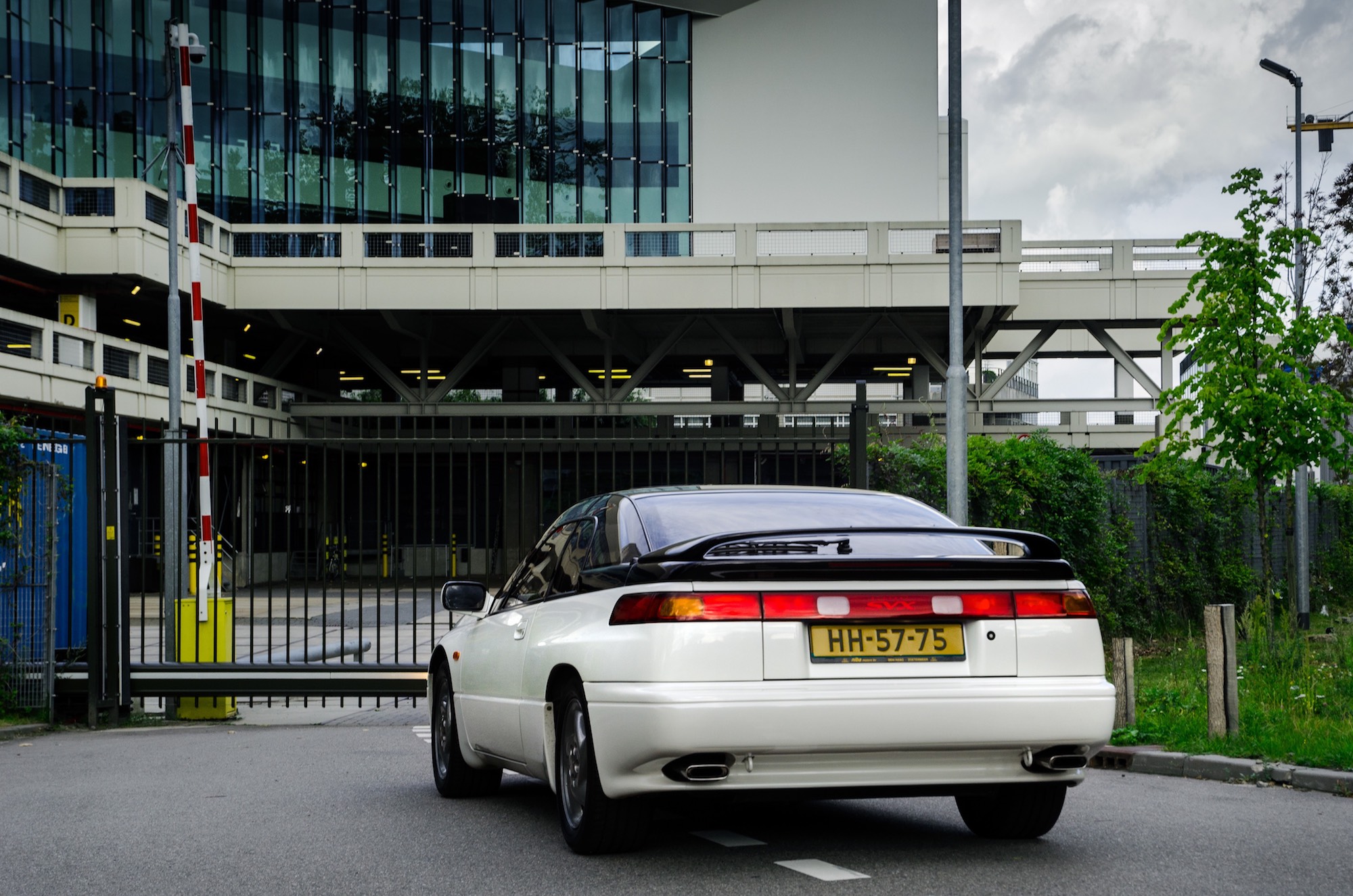 The looks are backed by sufficient power, coming with courtesy of 3.3 liter 6-cylinder boxer engine. All of the SVXs came with an automatic transmission, as none of the Subaru’s manual gearboxes at the time could handle the torque of this engine. Although some petrolheads frown upon such gearbox choice, the 4 speed auto and AWD (some cheaper SVXs were FWD) complements the cars GT character quite well. It is no slouch either - even though the vehicle is quite heavy at almost 1600 kgs, it can sprint to 100 km/h in just over 7 seconds, which is fine for an early 90s car. 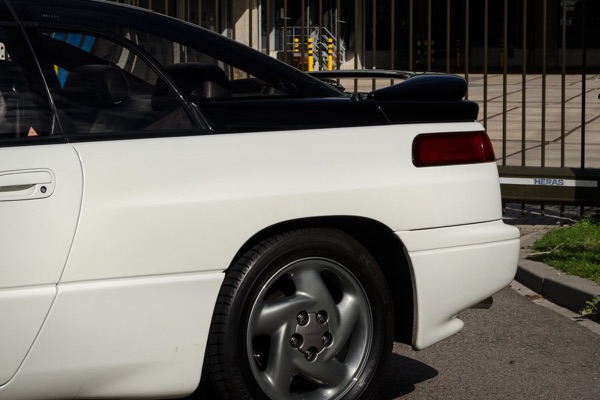 These are OEM wheels that came with the car
© Domantas Mizeikis 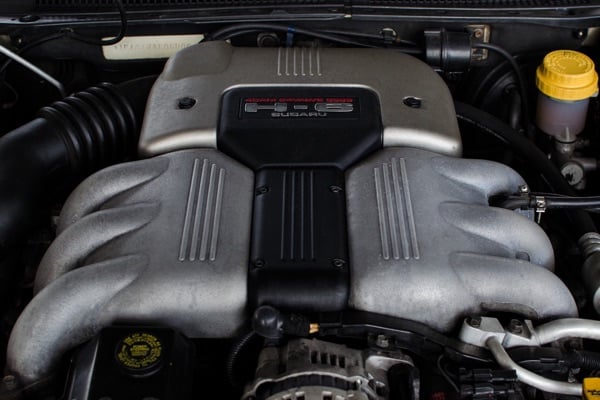 Clearly then, Robbert is quite happy both with the cars styling and its performance – he has owned it since 1997. Back in the 90s he was running the biggest Subaru dealership network in the Netherlands, and sold this car in particular to a customer of his in 1992. Some years later, he bought it back and has owned it ever since. During that time, he has taken the car to a number of trips to Europe and views the car as a part of the family now. Although he now has multiple cars in his collection, SVX is the one he’d be most reluctant to part with. 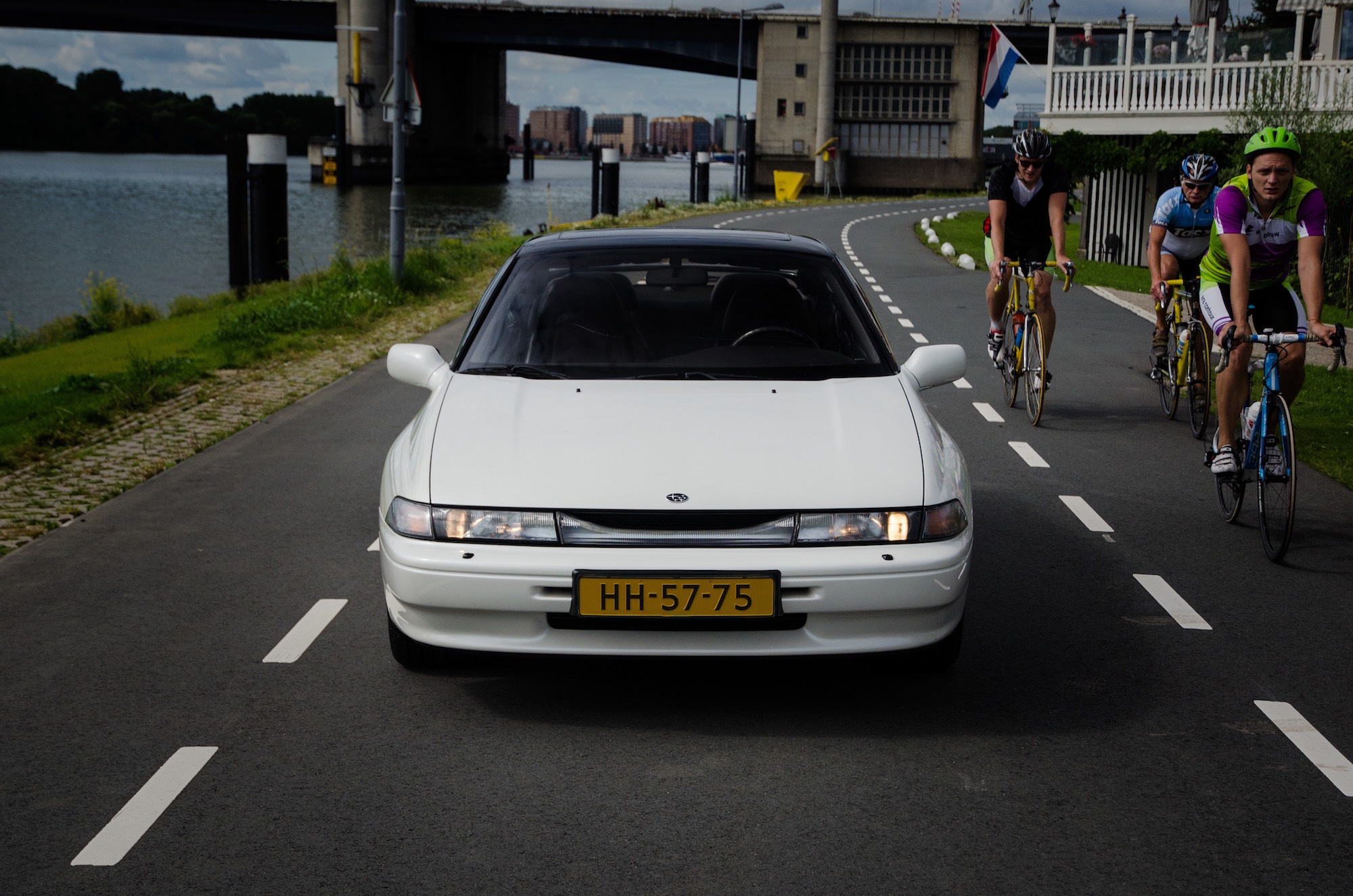 Horizontal lines dominate in the front as well
© Domantas Mizeikis

Overall, the silent interior is very well built and came in two trims, the mix of suede and cloth you see here and full suede in a higher spec model. Staying on the topic of materials, all of the wood on the inside is fake. At first, it may seem like a cheap move from Subaru, but Robbert pointed out that plastic stands the test of time much better. Thoughts about peeling and deteriorating wood in 70s Jaguars sprung to mind. 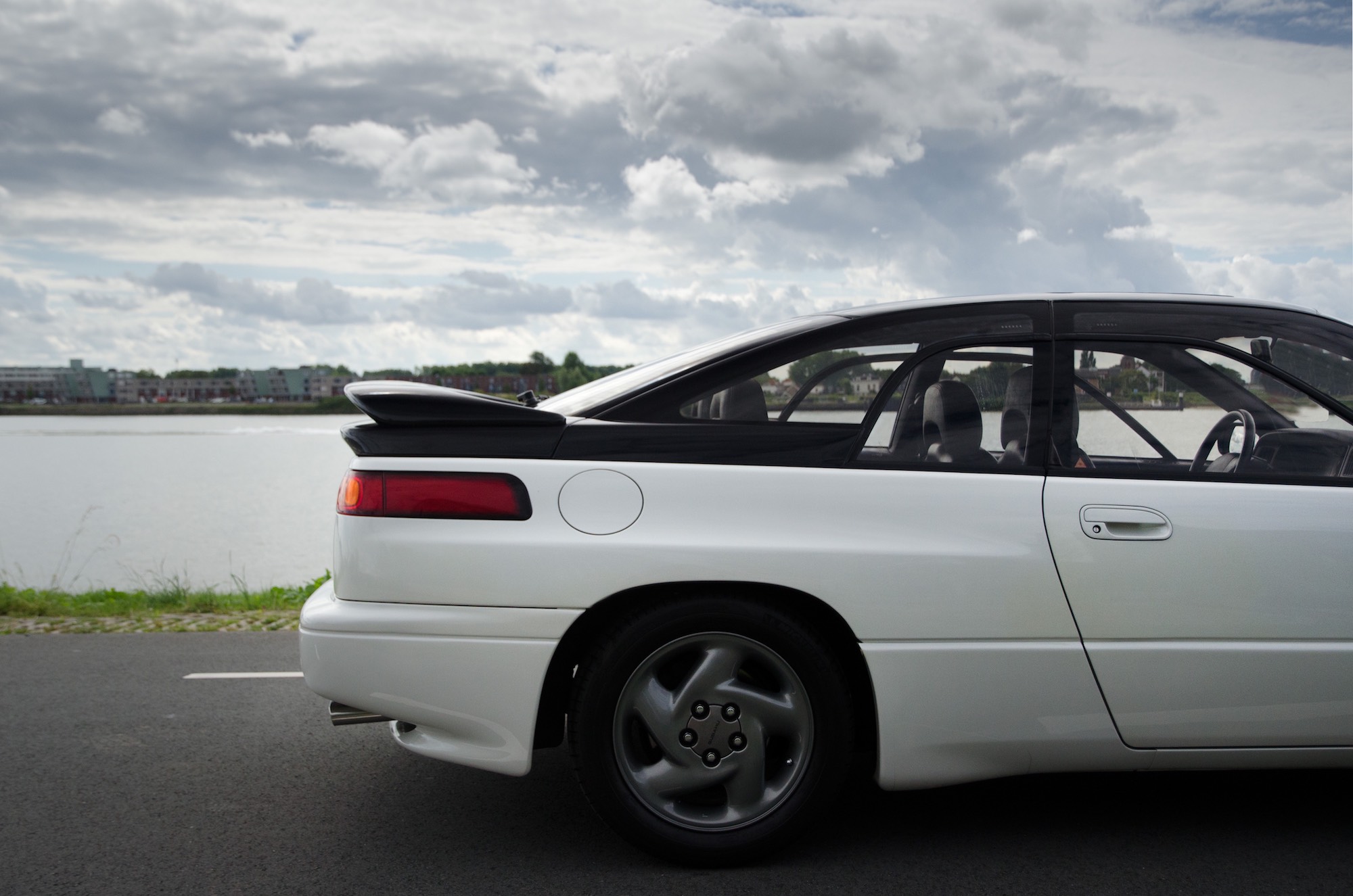 These lines were penned by Giugiaro himself
© Domantas Mizeikis

The no-nonsense theme is present through the whole interior – all the materials, switches and buttons feel good, but there are no fancy, space age LED gauges. Instead, the car has tasteful analog gauges and all of the stereo units are hidden under plastic panels. Bulky air-bag steering wheel aside, the interior has aged well and looks far better than some examples from the 90s. One thing that is worth noting is the smell inside the car. Despite SVX being a premium automobile, it somehow has the smell you’d find in most of the japanese cars from the era. I was quite surprised when I realized that this exclusive GT smells just like other Hondas, Mazdas and Subarus from that period. 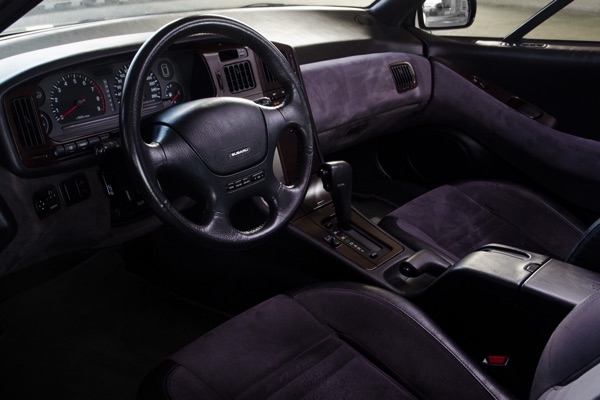 But that is where the similarities with 90s Japanese econo-boxes end. There were no rattles or noises in the interior, and the car did a pretty good job at isolating its passengers from the outside world. When you’re outside of the car, the dual exhaust tips sing the distinctive song of a flat-6 (almost 911-esque), yet inside you can hardly hear anything. Apparently, there is not much wind noise on a highway either, partially due to the unusually low coefficient of drag – 0.29. There is no surprise, then, that the owner chose to take this car on long journeys. 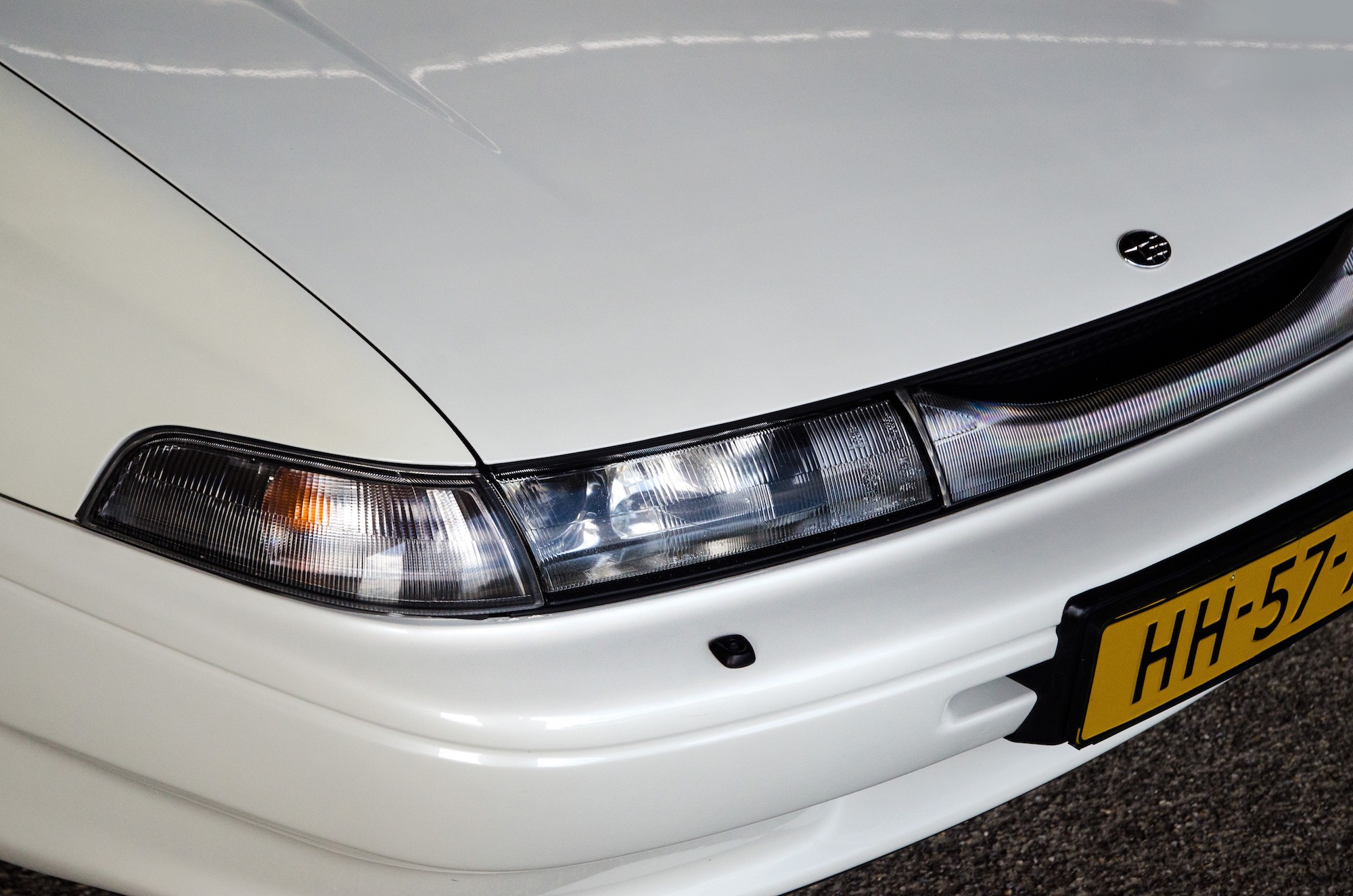 Robbert, the owner makes sure to maintain his SVX in immaculate condition
© Domantas Mizeikis

There are not many SVXs around these days, but the rarity not affected their prices too much. A decent one can be bought for around 5000 €, which is not much considering how exclusive and luxurious the car is. Granted, finding one may take a while, as the enthusiasts of these cars tend to hold on to them.