The May Bug Meet – Like A Huge Air-Cooled Party

For 35 years, May Day has had a very special tradition in Hannover: air-cooled, colourful, and crazy about Beetles and buses. And so thousands of aficionados came to on the first of May holiday in 2018 at the east trade fair grounds parking lot in the capital of Lower Saxony – for the 35th May Bug Meet. Not even a very strong breeze and low temperatures could disturb the cult event. It started with only three vehicles has, over the years, become a one-day Mecca for air-cooled Volkswagens.

And it was a real attraction this year as well, with more than 2,200 air-cooled, boxer-engined classics and 12,000 visitors braving the brisk northern weather. The unmatched spectrum of Volkswagen products from the 1950s, 60s and 70s again charmed both vehicle owners and onlookers. Originals stood next to customised cars and colourful hippy-mobiles in sight of elegant fashion from Rometsch and Karmann. Together, the scene celebrated from their perspective probably the most beautiful hobby in the world.

Volkswagen Classic and Vintage Volkswagen Commercial Vehicles shared a stand at the centre of the action. In addition to interesting vehicles from the brand’s own collections, fans could enjoy an genuine Volkswagen curry sausage, a cool Volkswagen ice-cream stand and the Volkswagen Online photo booth, set up for the first time, for professional vehicle shots. 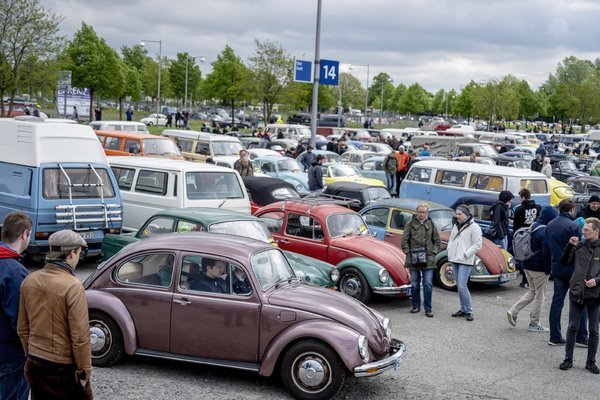 Colourfully united: the bug party was held for the 35th time in 2018
©Volkswagen archive 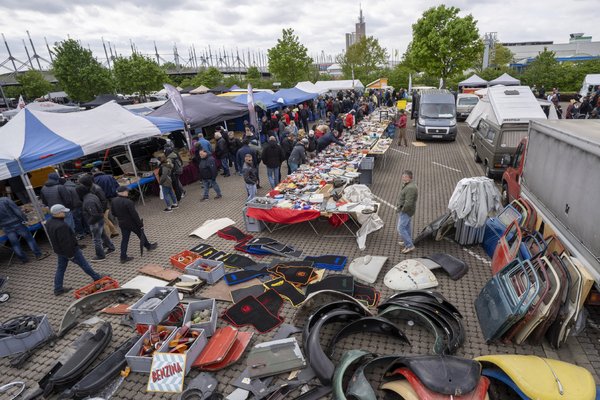 Bargain hunters and collectors: this year, the parts market could once again be called gigantic
©Volkswagen archive

Collectors and bargain hunters could immerse themselves for hours of pleasure on the huge parts market with more than 100 private and professional vendors. Seemingly endless rows of tables filled with parts were a treasure trove for rare, remarkable and useful items. Everything that could raise the pulse of an air-cooled Volkswagen fan could be found: the offers range from vintage technical literature to suitable replacement parts to complete vehicles in need of restoration.

Thanks to the colourful diversity, no fewer than three generations of buses and the numerous special bodies as the finishing touch provided plenty even for the most knowledgeable expert to discover and material for first-class shop talk. The creativity and love with which the owners had prepared their four-wheeled treasures for the one-day happening were, once again, breathtaking. 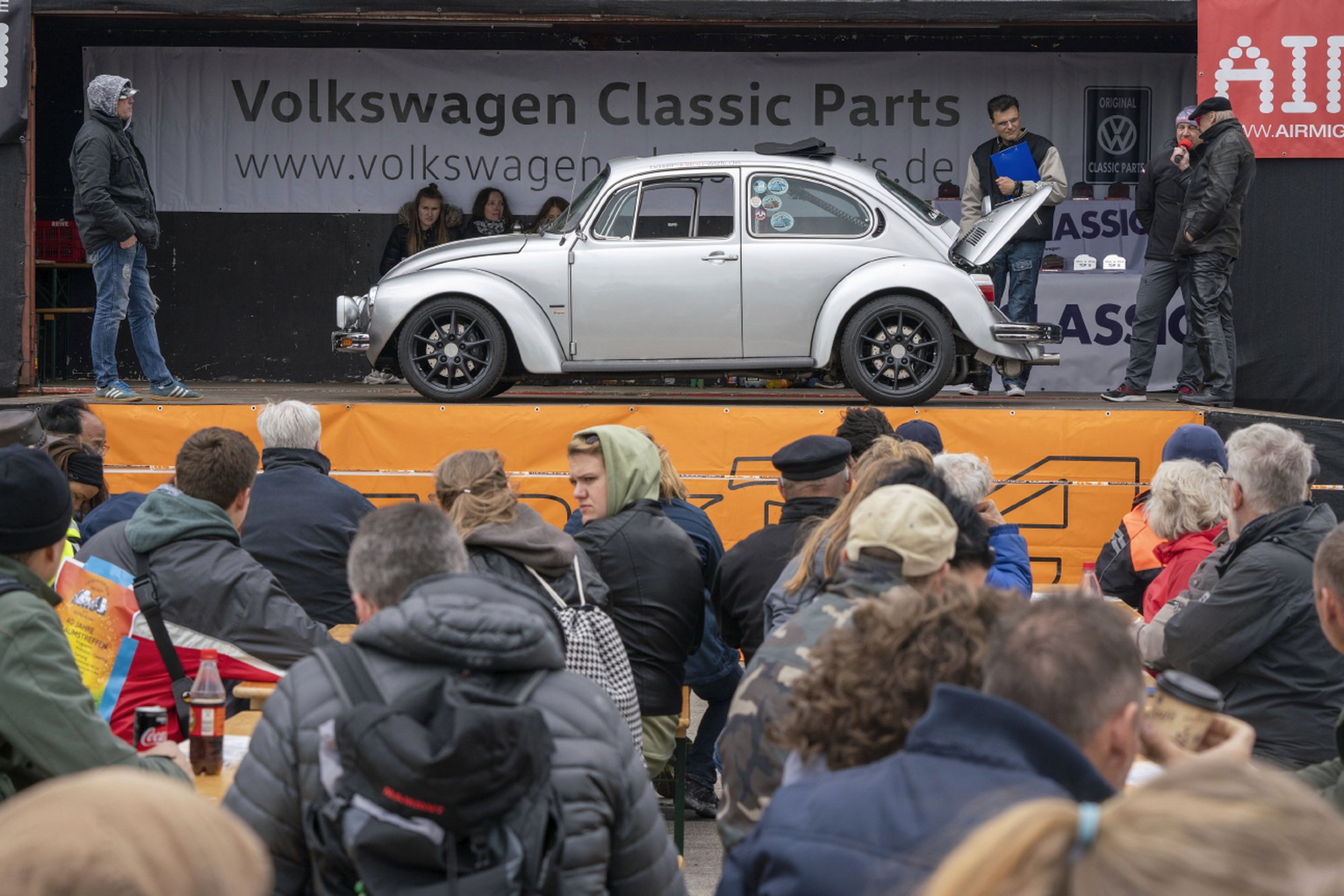 Jürgen Wagner travelled with his son Tobias from Rhineland-Palatinate in a Meyers Manx Buggy perfect to the smallest detail. His completely restored anthracite-coloured classic with an elegant tobacco-brown leather interior looked like new but was built in 1967. The fibre-glass body rests on a Volkswagen chassis shortened 40 centimetres and bears a 60 PS Limbach engine in the rear. “You don’t need more power than this. This boxer engine is plenty for this lightweight fun car,” emphasised Jürgen Wagner. The certified master of body restoration spent about two years working with his son on the body, including all the highly accurate details. 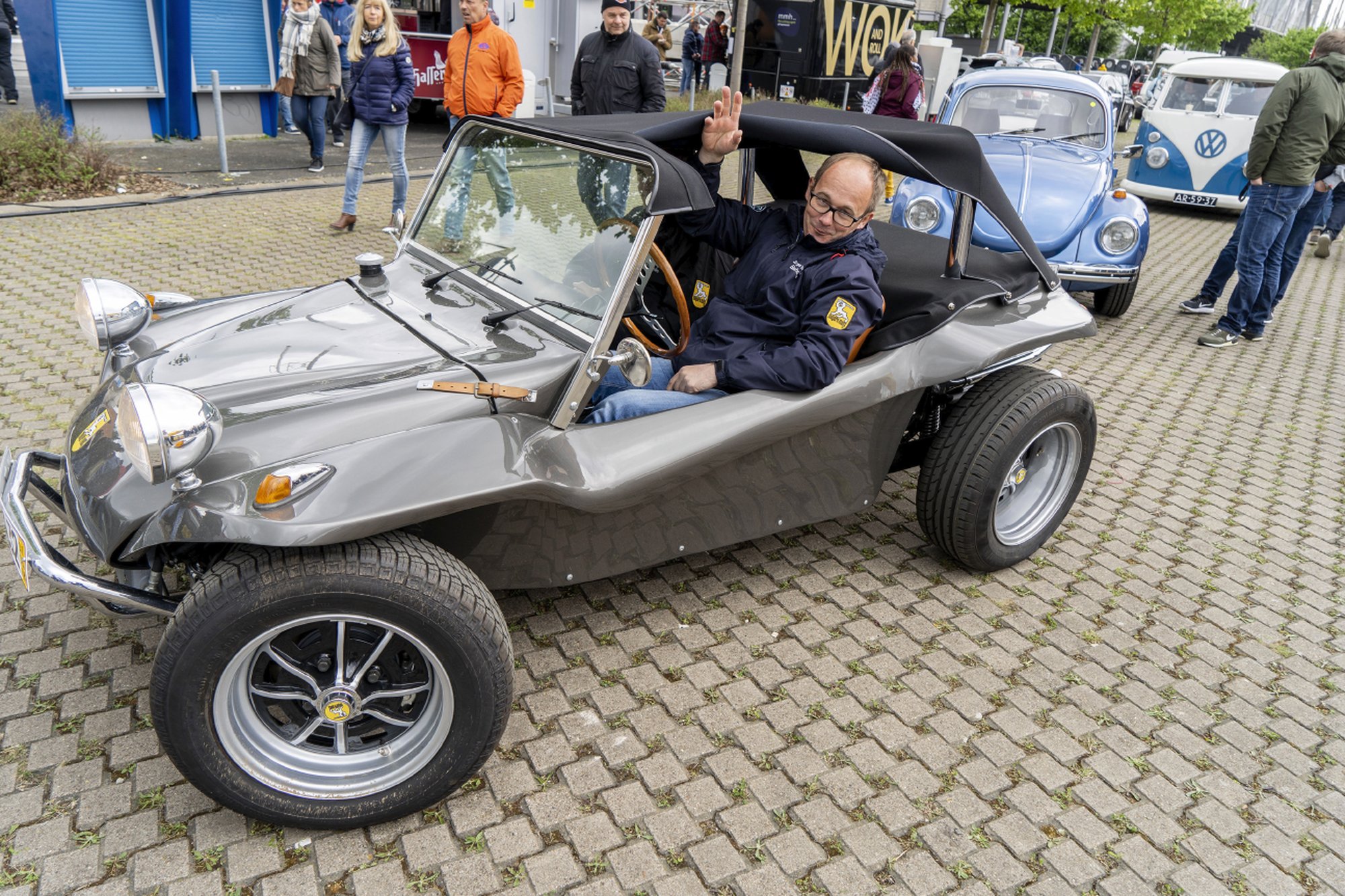 Jürgen Wagner arrived in his Meyers Manx Buggy, accurate down to the smallest details. The Volkswagen-based classic from 1967 has a 60 PS Limbach engine in the rear
©Volkswagen archive

Back on the road

Simone and Fabian Kramer travelled from Nackenheim in their T2 window bus. Their Volkswagen T2 was originally sold in Wiesbaden and remained in the region. Simone Kramer discovered it at the last minute, almost too late, as it was standing in a junkyard. It was serving a vicious guard dog as a rusty doghouse. Luckily, Simone nevertheless decided to rescue the T2. Bit by bit, the Kramers restored the bus and christened it, as homage to its eventful history, with the name of its former four-pawed inhabitant, Zeus. 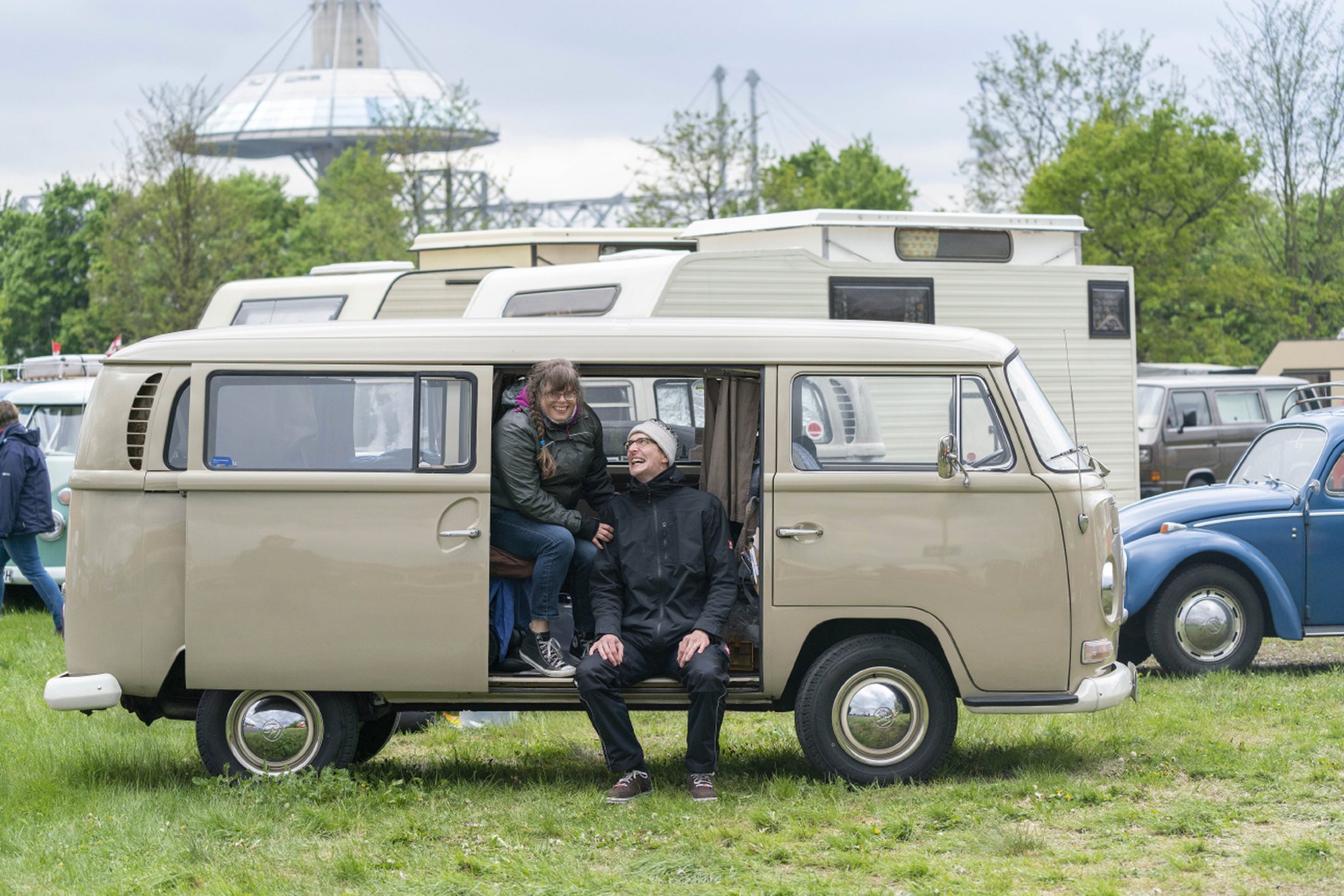 Simone and Fabian Kramer saved their T2 from its certain destruction. Now the vehicle serves them as a practical all-purpose and vacation vehicle, and can still provide reliable mileage
©Volkswagen archive

Handmade in the German Democratic Republic

What an appearance! Wolfram Scharnowski rolled in from Halle in the streamlined Rovomobil II. Formerly built in the GDR, the four-seater with the striking gull-wing doors employed Volkswagen 1600 technology and is notable for its drag coefficient of only 0.23, incredible even today. The engineer restored the flounder on wheels designed by his father, Professor Eberhardt Scharnowski together with his colleague Klaus Arndt, and used as a daily driver until 1987. 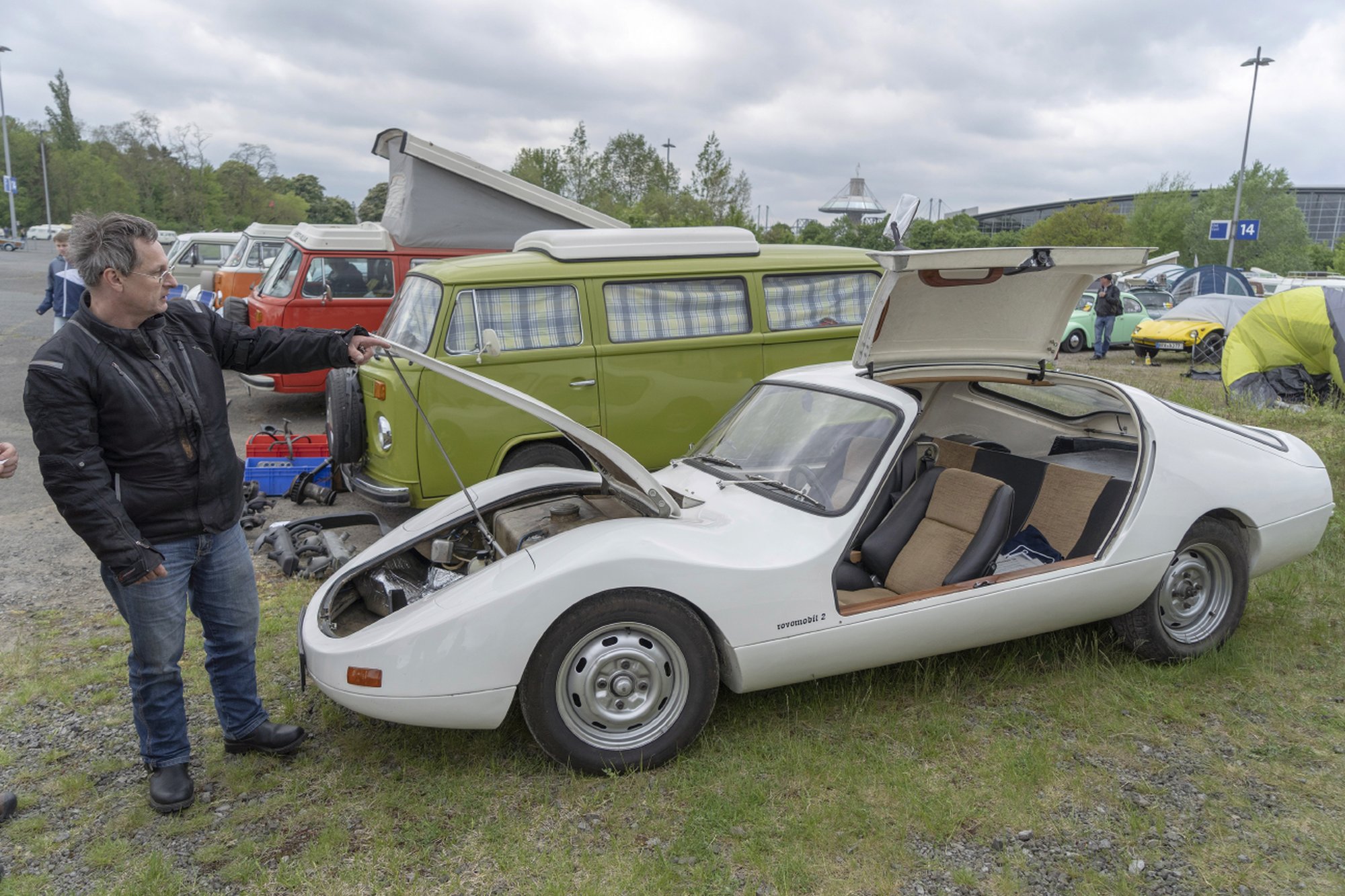 Wolfram Scharnowski arrived in a Rovomobil II, designed by his father Eberhardt with his colleague Klaus Arndt
©Volkswagen archive

The Dane Thomas Winther accepted a drive of approximately 550 kilometres from the Copenhagen area in order to participate in the cult event in Hannover. The 2018 meet was the twelfth for the May Bug habitué. He transported numerous accessories and replacement parts to Germany in his light-blue Beetle with a folding sunroof, originally registered in Sweden in 1962. However, business is of lesser importance; Winther even gave away some articles. 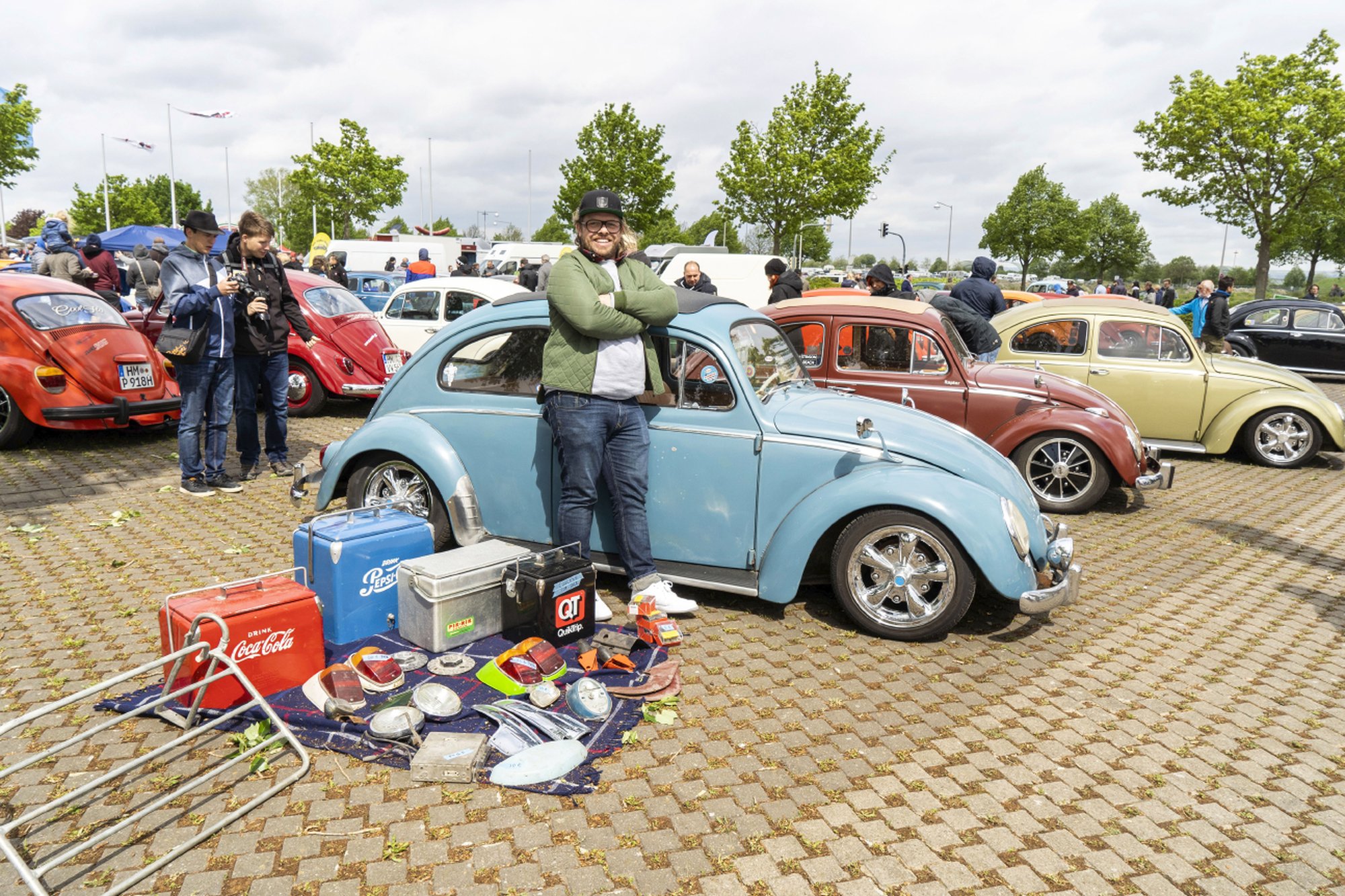 The Dane Thomas Winther attended for the twelfth time. He had a lot of parts in his baggage
©Volkswagen archive

Markus Hempe and Axel Hepp from Günzburg travelled together with their friends Andre Pukallas and Carolin Schneider in two air-cooled Volkswagens. Hempe bought his tastefully customised 1962 folding-sunroof model in 2002 as a daily driver and is still enjoying it fully today. “It’s a terrific feeling to be travelling with friends, to go to meets and to experience the atmosphere here.” His buddy Andreas Hepp was given his Type 3 estate without welding work by his girlfriend Carolin shortly after a bitter stroke of fate: after tragically losing his classic car to a fire in the fall of 2017, his friends put together a classic-car advent calendar for him – including the Volkswagen Type 3 estate for the US behind the 24th door. A great new start for Hepp, and reason enough to make the pilgrimage with his friends and the cool estate to Hannover for his first big meet, the May Bug Meet. 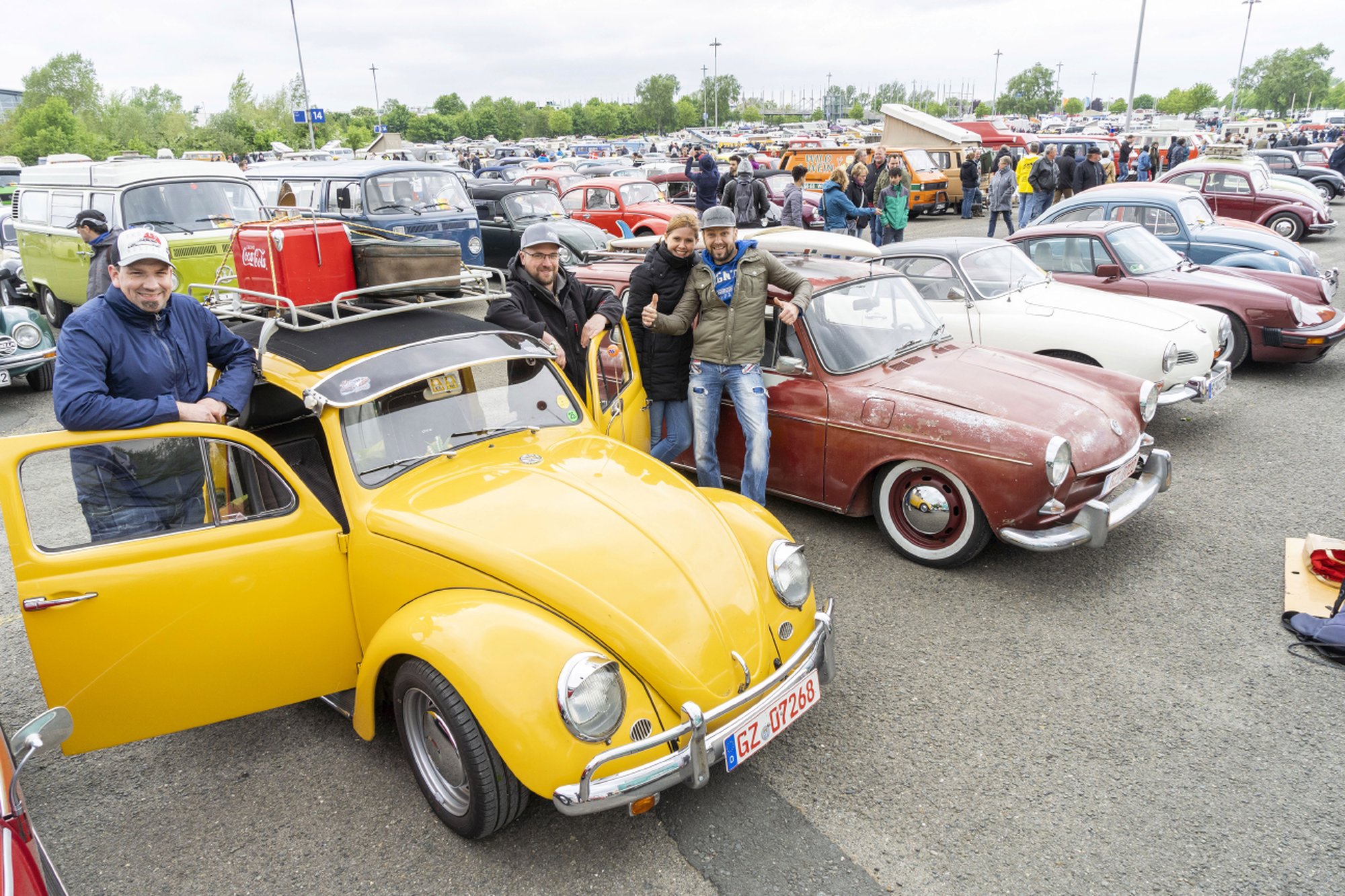