The Auto Union Grand Prix racers (Types A, B, C, and D) were some of the most technically advanced and developed racing cars in the world. The story of their survival resembles a good Cold War detective film with the elements of drama.

Auto Union cars stood out for their innovative technical solutions and excellent performances at various races. However, even more, interesting phase of their history began after WW2. The town of Zwickau, which is where these cars were made, fell to the Soviets. In autumn 1945, 13 unique Auto Union racing cars were loaded onto train wagons and sent to Moscow. They ended up at the NAMI (Central Scientific Research Automobile and Automotive Engines Institute), and most of them were later distributed to various factories and institutes for research.

The USSR car manufacturers and design offices had recently been tasked by the Kremlin to create Soviet racing cars, so the Auto Union racers reached out to them in the nick of time. In that time, many of the Soviet sports car prototypes were partly copied from Auto Unions. Moreover, they often used the original Auto Union parts too, since making their own turned out to be too complicated. 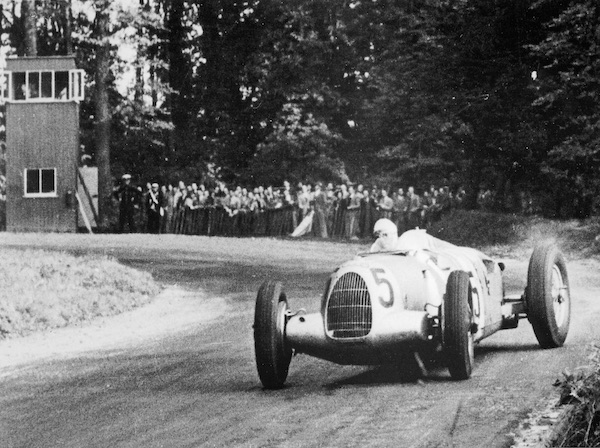 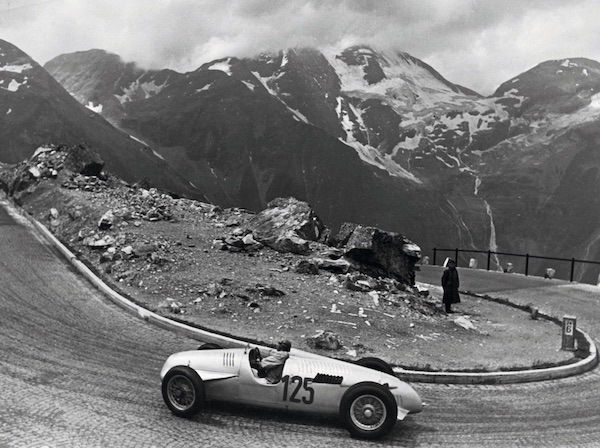 Three cars went to the GAZ factory in Gorky (now Nizhny Novgorod). They somehow managed to start one car using German petrol (which was left in the tanks), and this Auto Union was totalled during the 1946 demonstration run near Gorky, killing 18 people in the process. From that moment, the Kremlin banned all official public appearances of non-Soviet technology because, after all, they had to show that the Soviets could create their own racing cars. The other two cars became donors, and their parts were used for all kinds of experiments until, finally, there was practically nothing left of the Auto Unions at the GAZ factory.

Two cars were sent to the ZiS factory (later renamed ZiL). One of them was dismantled and later written off. The other one was miraculously rescued from destruction by a Latvian named Viktors Kulbergs, president of Antique Automobile Club of Latvia. In order to bring Western historic car enthusiasts together, he obviously had to do a lot of networking. One fine day in 1976, he got a call from ZiL: “Do something, because they’re just going to cut that car up for scrap metal.” After collecting the signatures of important Latvian communists, Viktors took off for Moscow and began a marathon through the offices of various functionaries, getting all of the permits he needed to take the Auto Union back home with him. 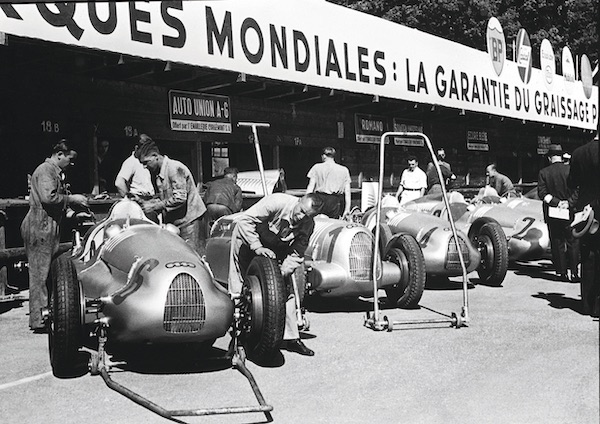 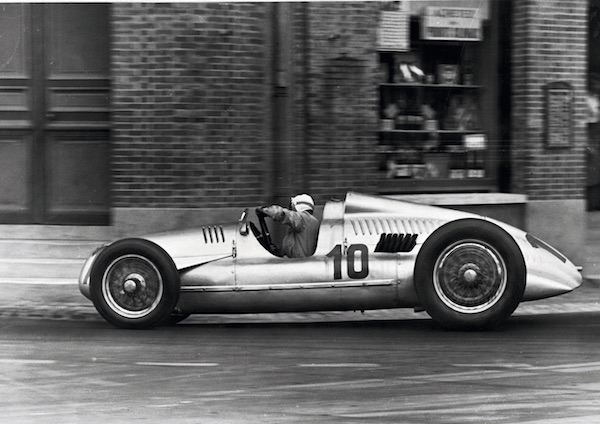 Once he finally got into the scrap warehouse, he found the gutted Type C/D, which he got back to Riga after finding an empty ZiL-130 truck that just happened to be heading for Latvia. Yes, this was the famous Auto Union V16 that competed in hill climbing races in 1938. later, Audi acquired it by giving the Riga Motor Museum an exact replica and a generous check.

Equally interesting things went on with the other Auto Union cars as well. True, they were more of piles of parts than full-fledged cars, but knowing the uniqueness of these cars, those piles were golden. Americans Paul and Barbara Karassik were rare historic car enthusiasts. Paul’s parents were Russians who emigrated from Russia on time, and he managed to build a successful business in the United States and started collecting pre-war cars. In the 1970s, Paul and Barbara began looking more closely at Eastern Europe, where you could find completely unique cars if you were willing to sweat a little. “Sweat a little” means that you had to use Eastern Bloc negotiation tactics – in other words, bribes. For example, they managed to find an ultra-rare Mercedes-Benz and DKW in Bulgaria, but customs documentation was looking difficult until the customs officer mentioned that he needs some new tires for his car. Welcome to the Eastern Bloc. 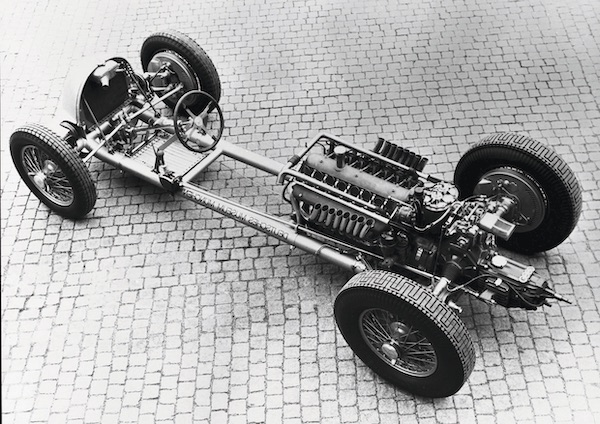 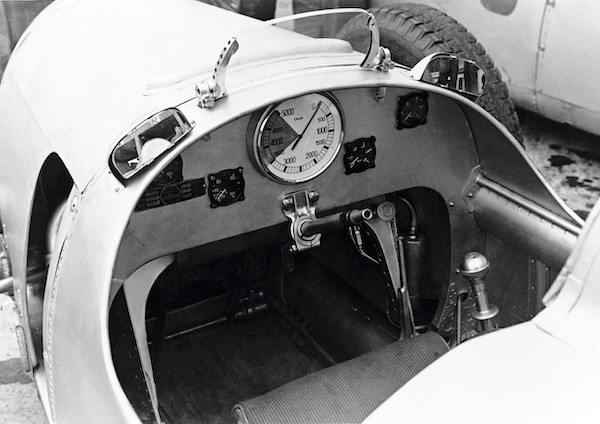 A bit later, they got friendly with some Poles and found out that there should definitely be some surviving Auto Union racers in the USSR. The search for the Auto Unions had became something of an obsession for the Karassik family during the next decade. The first family member to visit the Soviet Union was their daughter, and then Paul came there himself in 1982 as part of an Intourist package tour. These tours were strictly planned and supervised, but Karassik spoke Russian well, so he managed to arrange meetings with classic car club members and even see the Auto Union Type C/D in Riga. However, further searches were difficult. Fearing the KGB (and maybe also suspecting that Karassik was an agent himself), people were reluctant to share information. So, Paul and Barbara had to continue to visit the Soviet Union, armed with various deficit items to cement their friendships. And as Paul Karassik later mentioned in one of his rare interviews, "You cannot believe how much alcohol I had to consume to get near to these parts! It would take several rounds of vodka just to talk about the weather; another to mention cars; many more still before he could ask about the Auto Unions." 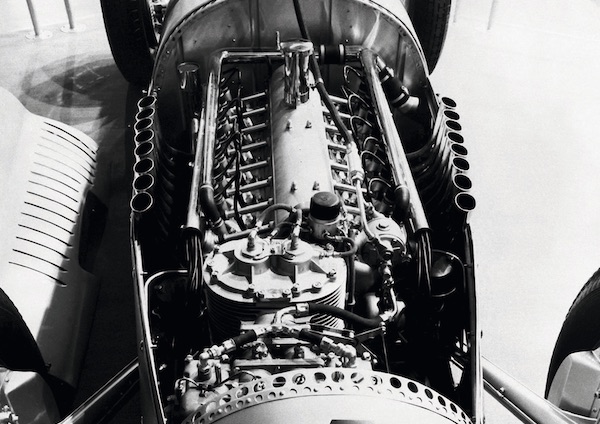 The engine of the Type C, 16 cylinders, supercharger, up to 520 hp
© Audi archive 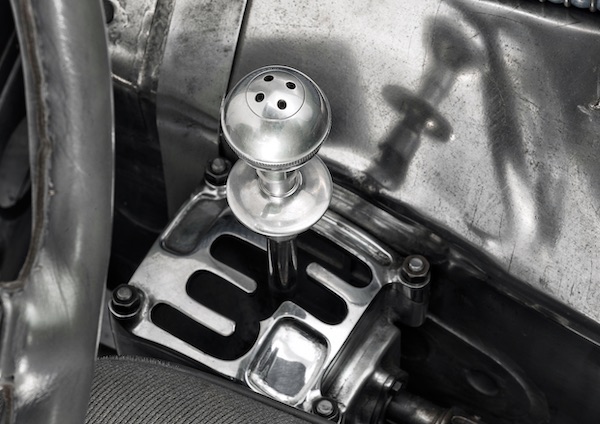 But persistence leads to success. One day in Vilnius in 1984 or 1985, he managed to find out about a big, big engine located somewhere near Leningrad. He saw photographs and there was no doubt that it was a V12 Auto Union Grand Prix engine. There was a chassis nearby that had been turned into a trailer... He probably should have been thrilled, but what difference does it make if you find something valuable behind the Iron Curtain? But let’s not forget that the Karassiks had a lot of foreign currency. So, they succeeded in buying the engine, chassis and some other parts, and drove them out of the country themselves in a camper van. It was a 1938 Type D base, which would later be restored and purchased by Audi for a stellar amount. 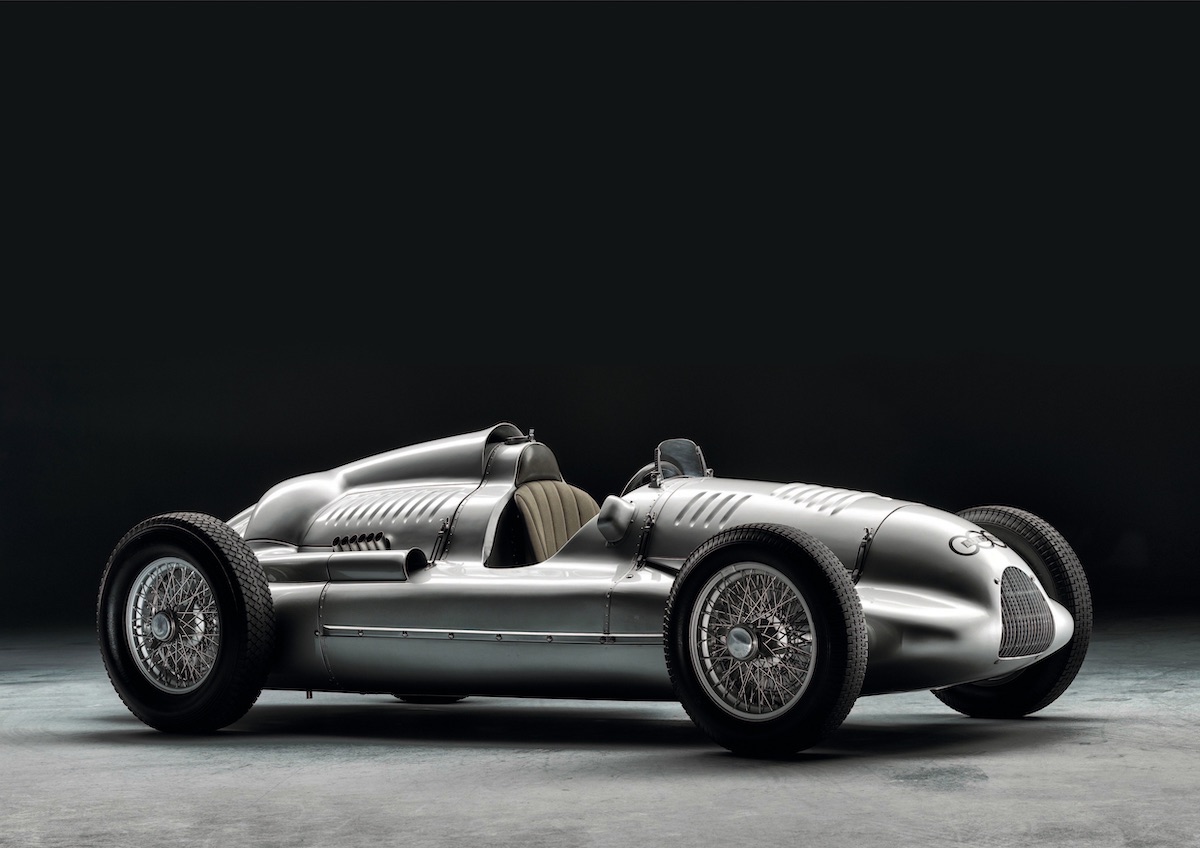 But that’s just the first part of the detective film. An Ukrainian woman living in the United States had heard about the Karassiks’ visits to Eastern Europe and shared her story. She told them how she had been deported to Germany as slave labor during the WW2 and was forced to leave her daughter in Ukraine. The woman knew her daughter’s address but had never met her, so she asked the Karassiks if they could make a contact. They did exactly that on their next trip, but they didn’t spend any time looking for other Auto Unions while they were there.

Later, that Ukrainian woman mentioned in a letter to her daughter that the Karassiks, so far unsuccessfully, had been looking for an engineer called “Valery” Nikitin for a long time, who had constructed some sports cars that set several Soviet speed records in the 1950s and 1960s. The daughter replied that she was surprised that the Karassiks hadn’t mentioned it because that person was Konstantin Nikitin, who had worked in a nearby factory with her husband. Paul and Barbara rushed back to the USSR, where they found a man much-decorated for his technical achievements, but who was living in the extreme poverty. He told them that he had gotten his hands on two or three Auto Unions at Kharkiv Polytechnic Institute. Incidentally, he also recalled how they tried to dismantle the Grand Prix engine of one of them, but they didn’t have the right tools so they simply saw it in half… 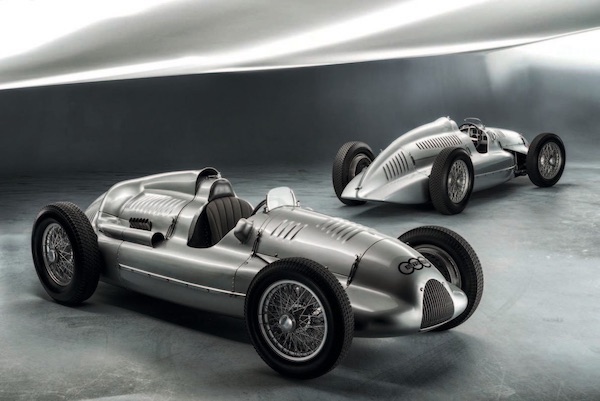 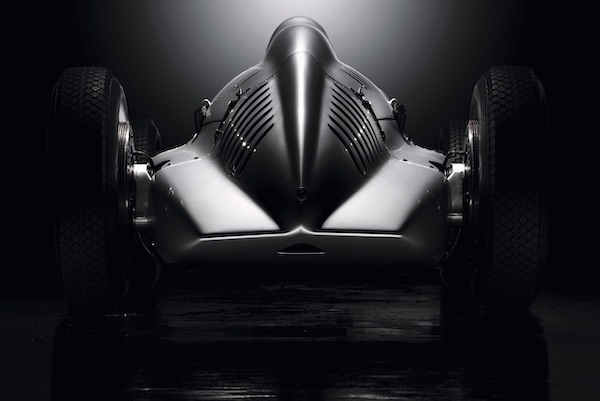 Several visits later, Nikitin led the Karassiks to quite a few parts: an engine, gearbox, complete chassis, supercharger, carburettors and even the remains of the bodywork of a 1939 Auto Union Type D (incidentally, some parts were found in old brickworks). But like the first car, this was just the beginning. Later, purchase papers had to be drawn up for each part and stamped by the bureaucrats in charge, and they had to transport everything out of there to top it off. 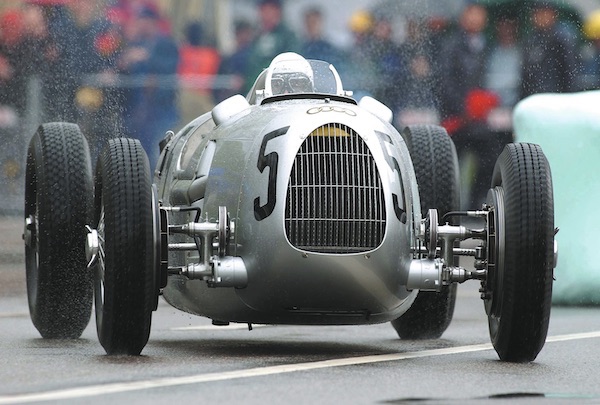 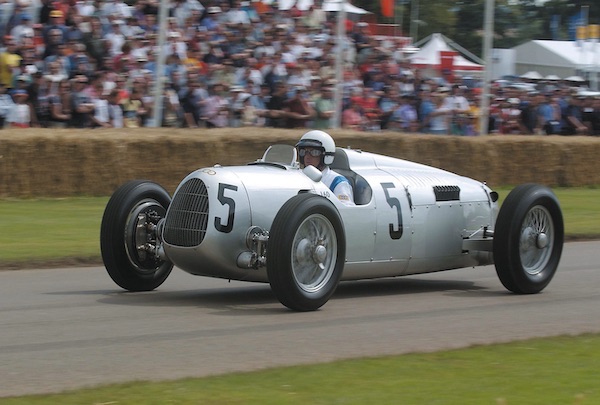 They bought a Mercedes minibus in Austria, filled it with cola, beer, sweets, chocolate, cigarettes, and cosmetics, and headed for the Ukrainian border. Once they loaded up their automotive find, they set out on a two-week drive on bad roads (with the daily headache of where to get fuel) to the Finnish border. From Finland, Type D was flown in boxes to the United States. The car was later restored and eventually ended up with Audi. These two cars are now known as the Karassik Auto Union cars. 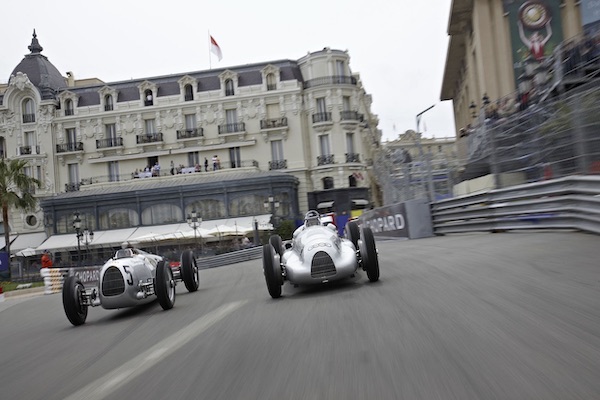 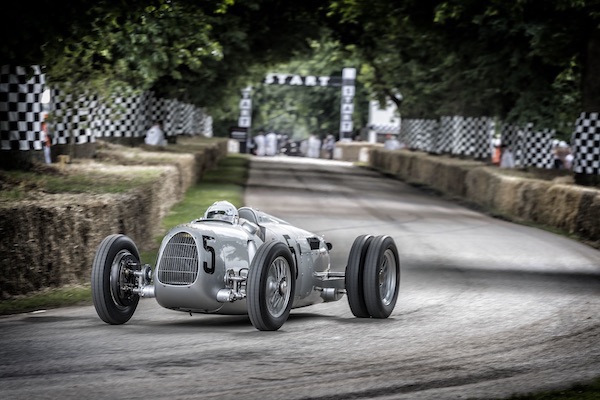 So, a large portion of the Auto Union cars disappeared in the expanses of the USSR, but these three survived. In total, five cars are known to have survived worldwide (the other two managed to avoid deportation to the USSR).