Volkswagen and Its British Roots

70 years ago, the British handed over the Volkswagen plant in Wolfsburg to the Federal Republic of Germany. The date marked the dawn of Volkswagen’s ascent in post-war Germany and beyond.

At the end of the Second World War in the summer of 1945, the victorious allied forces faced the great challenge of ensuring the nutrition of the German population in their occupation zones. In addition, housing, heating material and clothing was desperately needed. At the same time, they had to decide what to do with the remaining industrial plants. One of these factories was the Volkswagen plant in Wolfsburg.

After the liberation of the city by American troops on April 11, 1945, the plant had initially been on the decommissioning list of the allied forces. However, when the British military government entered the occupation zone in June 1945 and seized the factory, it quickly became clear what future prospects it offered. The British decided to administer the factory as a trustee and to convert it into an international automotive manufacturing location until it was returned to the Federal Republic of Germany on October 8, 1949. One of the central figures was British Major Ivan Hirst.

The British set the course


Initially, the factory was only used as a repair shop for military and transport vehicles. Hirst was the first to recognize the possibilities offered by the establishment of civilian vehicle production in the almost completely destroyed area. He had machines and stocks that had been outsourced, returned. The success story took its course when he discovered an old Beetle and sent it to the British headquarters.

Inspired by the vehicle, on August 22, 1945, the Volkswagen plant received an order to produce 20,000 cars for the British military administration. After only two weeks, the program was doubled to 40,000 cars. With the start of civilian series production only a few months later, on December 27 1945, the Wolfsburg plant became the first automotive factory in Germany to resume production after the war. The first goal was to produce 1,000 cars a month. 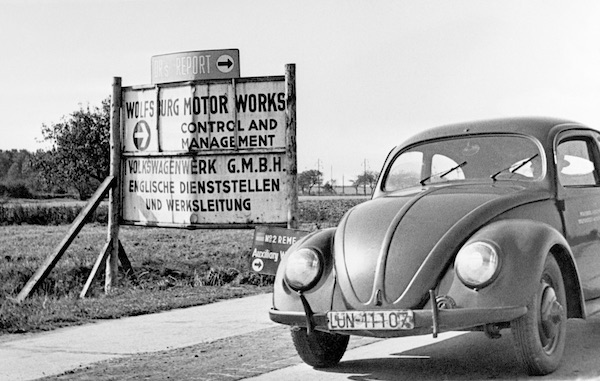 In 1945, the responsibility for the Volkswagen plant was transferred to the British military government.
©VW 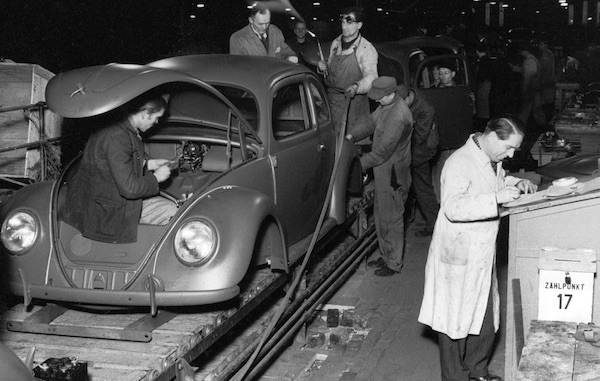 From 1947, Volkswagen vehicles were sold outside Germany for the first time.
©VW

On the premises: growing grain


Not an easy task: due to the economic situation, it was not only the procurement of material and fuel that posed a major problem for the power plant. Recruiting workers was also a potential obstacle on the way to becoming a successful company. In order for them to do physical work at all, Volkswagen provided the workers and employees with the essentials and even had grain growing on the premises. Following the British military administration setting up an employee representative body in the summer of 1945, the first democratic elections for a works council took place on November 1945.

The basis for an international export business

Over the next few months, the British implemented further measures to improve conditions and set up an effective trading organization with a focus on service and sales. An example of quality control: from 1946, when the 10,000th vehicle celebrated its anniversary and the production target of 1,000 cars per month was reached, the newly established customer service department trained German and English workshop employees in the maintenance and repair of vehicles. In addition, with a network of ten wholesalers and 28 dealers reporting to them throughout the British zone (as well as the main distributor in Berlin) the British set the course for the development of an export business from 1947 onwards. Volkswagen vehicles were sold outside Germany for the first time – the basis for the international success of the company. 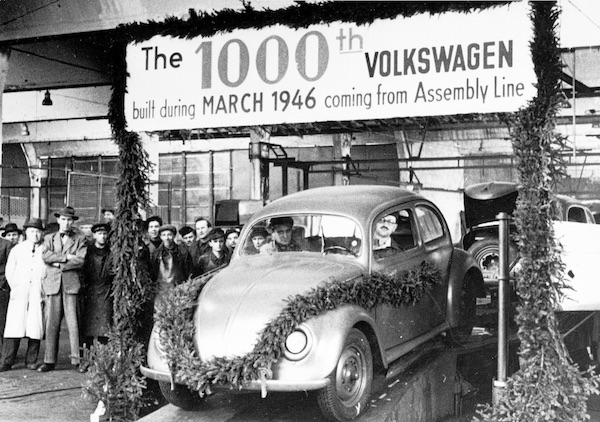 Due to the shortage of raw materials and the severe winter conditions, it took nearly three months before the 1,000th car was produced.
©VW 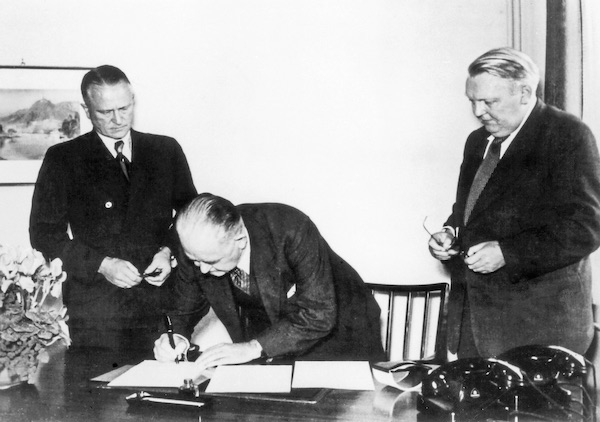 On October 8, 1949 trusteeship over "Volkswagenwerk GmbH" was handed over to the Federal Republic of Germany.
©VW

From summer 1947, Volkswagen offered the export saloon, a premium version of the Beetle. It was also quite attractive to German customers. This was also illustrated by the production figures: in two years they had almost doubled. A good 19,000 cars left the factory in 1948, of which a quarter were sold abroad.

In addition, Volkswagen now also produced spare parts to repair used cars. The introduction of the currency reform on June 20, 1948, gave Volkswagen a further boost. In the following year, production rose to more than 46,000 cars. In 1950 it finally reached 81,000 saloons and 8,000 Transporters, which were also manufactured at the plant.

Return to the Federal Republic of Germany


On October 8 1949, the British military government placed the trusteeship of “Volkswagenwerk GmbH” into the hands of the Federal Government. The national authorities commissioned the State of Lower Saxony with the administration. As a result, Volkswagen was in “pole position” when it came to the beginning of the so-called economic miracle.

A lot of Beetles are survived to our days. Interested? Restored or original VW Beetle cars for sale on our marketplace from the whole world!