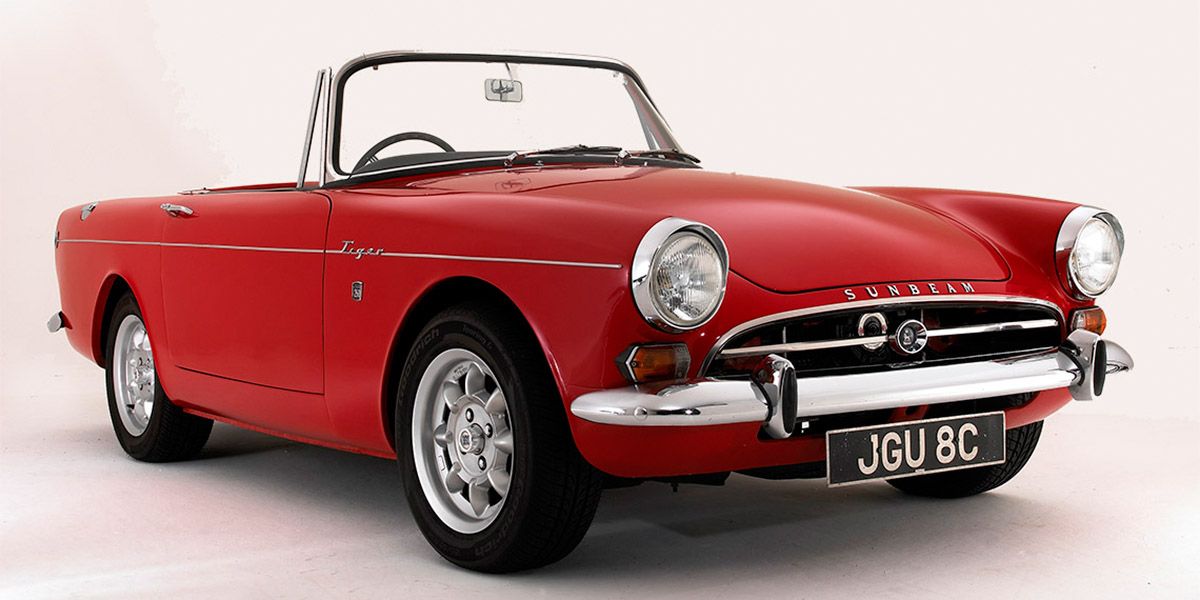 British roadster with a purebred American power plant supervised by Carroll Shelby himself. The Sunbeam Tiger is widely known as poor man’s Shelby Cobra. This tiny sports car could barely fit a muscular V8, making it an odd and exciting package.

The story of the Tiger has started in early 1960s, when executives of Rootes group, the company that ran Sunbeam, have decided to give their Sunbeam Alpine roadster more firepower. The original 4 cylinder pushrod engine, producing around 80 bhp, had to make way for something beefier. Allegedly, the manager of West Coast sales for Sunbeam at the time, Ian Garrad, used a wooden ruler to approximately measure the space available in Alpine’s engine bay. He then sent a colleague of his to several car dealerships with the measurements in order to find an engine that would fit. Ford’s 4.3-liter V8 was chosen for the task and Carroll Shelby was commissioned $10,000 to ensure both the engine and its 4-speed transmission fit in the car. Shelby was a go-to person for such procedure, as he had already proven himself capable when developing the infamous Cobra.

Doubling the number of cylinders was not an easy task. The engine fit so snuggly, Sunbeam’s employees had, supposedly, to use a sledgehammer to bend each engine slightly to make it fit. As a result, there was so little room in the engine compartment, making routine service overly complicated. To address this issue, an access hole was made in the driver’s foot-well in order to aid the engine service. The problems did not stop there – Sunbeam Tigers were prone to overheating, as the original cooling vents were often not capable of supplying enough air to keep the bigger engine cool.

Despite these few shortcomings, the Tiger was received well as an enthusiast’s car. Mark I Tigers made approximately double the power, 164 bhp, compared to the Alpines. Although that power figure was not staggering even in the 1960s, the small body and light engine, Ford’s 4.3-liter weighed around 200 kg, made the car extremely lively. Some dealerships were offering an optional power package, which boosted the power up to 245 bhp. This was a vast increase in power, especially considering that Mk I Tigers had identical suspension and brakes to those mounted in standard Sunbeam Alpines.

Mark I, produced from 1964, gave way to Mark II, which was made in 1967. Most importantly, the renewed car has received a bigger version of the engine, 4.7-liter this time, producing 190 bhp in the stock form. Aside from that, the exterior received a revision as well, with the introduction of new front grille and side stripes. The car was discontinued due to more stringent emission regulations for 1968 and costly modifications that had to be done to meet them.

But emission regulations were not the only factor for Tiger’s demise. Rootes Group, along with Sunbeam, was bought by Chrysler in 1964. At first, Chrysler did not have the control package of the company, but has increased its presence over the years until it completely took over. Unsurprisingly, Mk II Tigers did not have any external identification that they are powered by a Ford engine. In fact, Chrysler attempted putting their own V8 in the Tiger, but none of their engines could fit.

During the short production run, around 7,000 tigers were produced, only 633 being Mark IIs. Relevant rarity and the Shelby’s touch result in pretty high prices of these little sports cars – good ones start at around €50,000. Sunbeam Alpines are several times cheaper, thus Tiger replicas with a V8 swap are not uncommon.