A Daredevil in a Black Cowboy Hat

Carroll Shelby is one of the greatest automotive icons. Remembered today mostly for his V8 sports cars and powerful modified Mustangs, he was also a talented driver and a race team manager. We look at how this Texan shook the automotive hierarchy by racing in Europe and even taking on crème-de-la-crème, Enzo Ferrari himself.

Despite having a car obsession since early age, Shelby could not really get involved in the hobby due to insufficient funds. Motorsport was out of reach for a small Texas town boy with a post-man for a father. To make matters worse, Carroll’s first car, ’38 4-cylinder Willys, offered a lackluster performance and could not satisfy his need for speed. Shelby’s itch to go fast was partially satisfied when he was recruited into the army and managed to become an airplane pilot. Ambitious Texan moved up in ranks and by the end of the war he was training other pilots. Perhaps luckily for him, he remained states-side throughout his service and did not have to engage in any real combat. 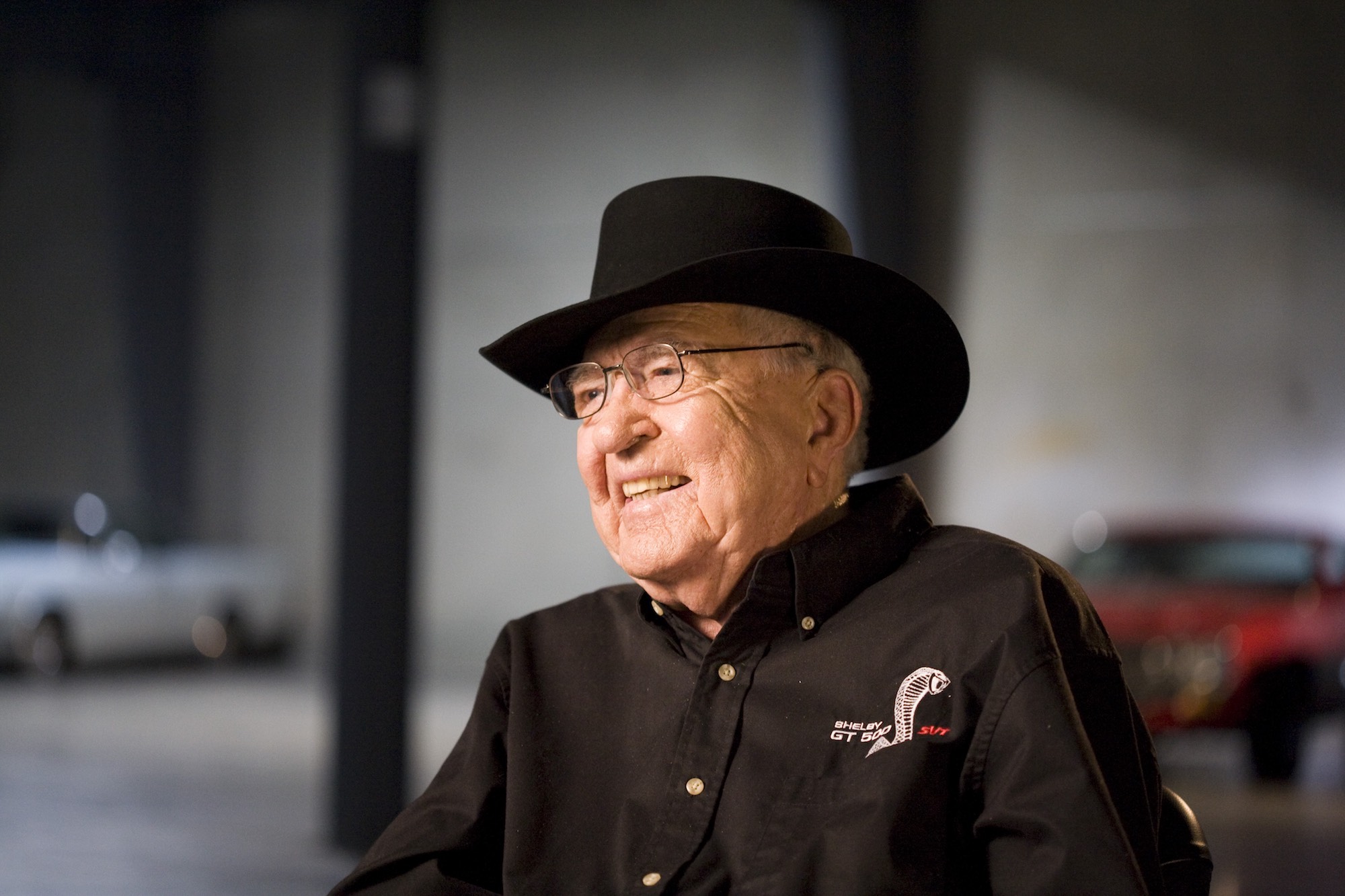 Soon after the war, Shelby started a long series of his entrepreneurial ventures. After all, he grew up through the Great Depression, thus he was forced to learn to hustle. First, he had a dump truck company in Dallas, then he got into chicken farming. The first batch of chickens he sold left him with a healthy $5,000 profit ($50,000 in today’s money). From then on, the legendary race car guru became a chicken farmer.

Another serious breaking point in Carroll’s life came in 1952. Then 29-year-old Texan entered a race with his friend’s MG-TC. Not only had Carroll beaten everybody else in MG class, he also gave much more powerful Jaguar XK120s a run for their money. Mind you, XK120s were the fastest production vehicles in the world, so Shelby’s ability to beat them in a little MG was most certainly admirable. Weirdly, Carroll did not really intend to race there at first. He recalled the day: “He was a friend of mine from high school, Ed Wilkins. He wasn't going to race it [the MG] himself; he was just up there to spectate. After we got up there we decided that I'd drive it. So it was really just kind of a lucky accident that I drove my first race.”

This motorsports rookie carried on racing through 1952 and 1953 seasons, while still retaining his occupation as a chicken farmer. One time, Shelby was late to a race and did not have enough time to change, so he arrived at the track in his striped farmer coveralls. This attire gathered heaps of attention. A born-marketer, Carrol decided seized this opportunity and make the coveralls his trademark racing outfit. It goes without saying, back in the 50s there were no requirements for inflammable racing clothing.

Pretty soon Shelby’s abilities behind the wheel were noticed by John Myer, the Aston Martin racing team chief. It was not clear if he was attracted by the striped racing attire or Shelby’s driving. Either way, he was taken in and in 1954 proved his worth by driving a DB3 at Sebring. Consequently, he was invited to join Aston Martin’s works team racing in Europe which truly kick started Shelby’s career as a pro race driver. 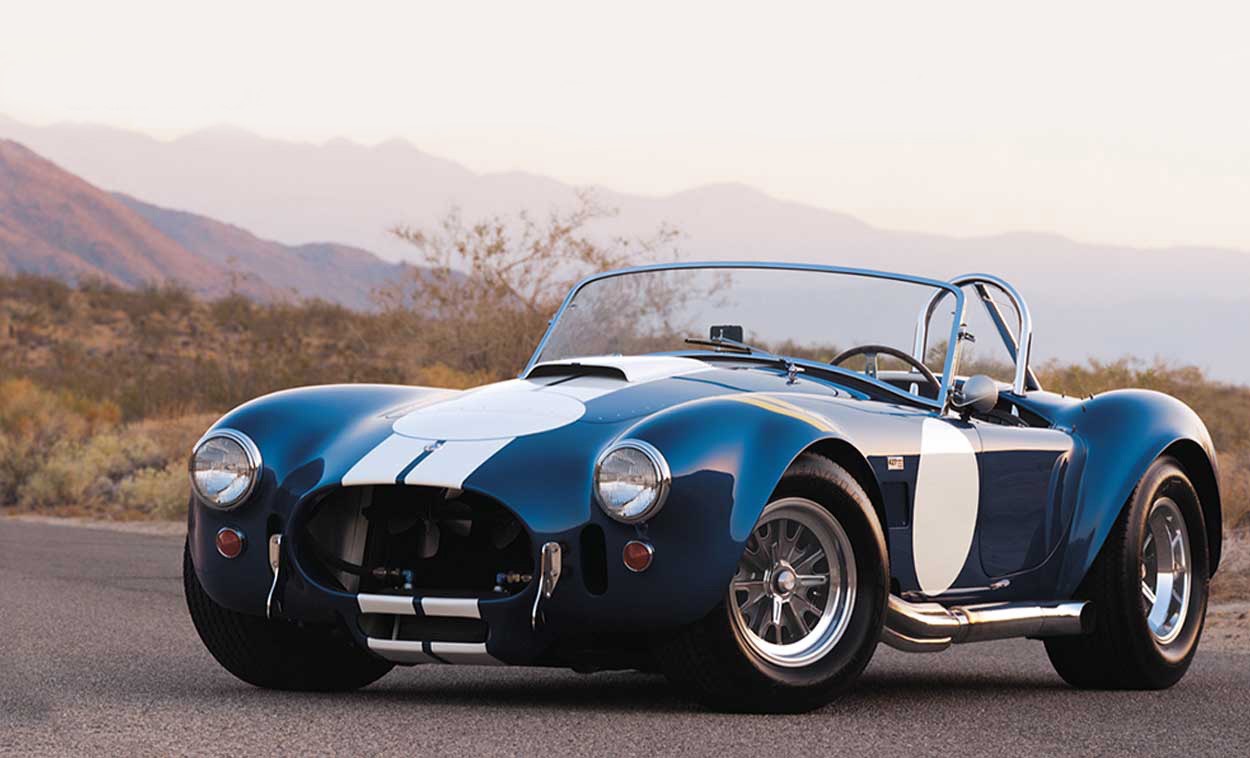 Racing on both sides of Atlantic

By the June of the same year Shelby was driving an Aston Martin DB3S in Le Mans. Sadly, the team did not finish, but the Texan remained in Europe for the whole summer, soaking in the European racing culture. This did not mean Carroll missed out on the American races – he took part in Bonneville Salt Flat speed runs, Carrera Pan Americana and Sebring the same year. What is more, he famously had to race in Sebring with his arm in a cast after suffering a crash in Carrera Pan Americana!

Shelby’s racing career remained equally intense for the following years, so eventually he was noticed by Enzo Ferrari himself. When il Commendatore approached Shelby, he declined the proposal. Shelby recalls this encounter:

“Old Man Ferrari offered me a job and I said, ‘Well, Mr. Ferrari, I have a family, three children, what kinda money?' He says, ‘Oh, it's an honor to drive for Ferrari.' And I said, ‘Well, I'm sorry, I can't afford the honor.' And I had a deal with John Wyer, anyway, and I had another deal with Maserati. I had a choice of four or five different offers. So I turned Ferrari down.”

Later on, Enzo offered Shelby money, but he declined these offers as well. The American had no respect for Enzo. In Shelby’s opinion, Ferrari was too focused on winning, pushing his drivers over the edge. Carrol blamed Enzo for deaths of multiple of his racing friends.

Shelby opted to race for Maserati instead. In 1957 he famously spun out in his Maserati immediately after the start only to overtake the whole field during the 100 mile course of the race and become a winner. Carrol even raced for Maserati in F1 for two years, 1958 and 1959. That did not go incredibly well and Shelby scored championship points only once after finishing fourth in Monza. Not successful in F1, he managed to win Le Mans for Aston Martin in ‘59, sharing the duties of driving DBR1/300 with Ray Salvadori. In those years, Shelby was doing even better across the pond, claiming three champion titles in United States Road Racing Championship. 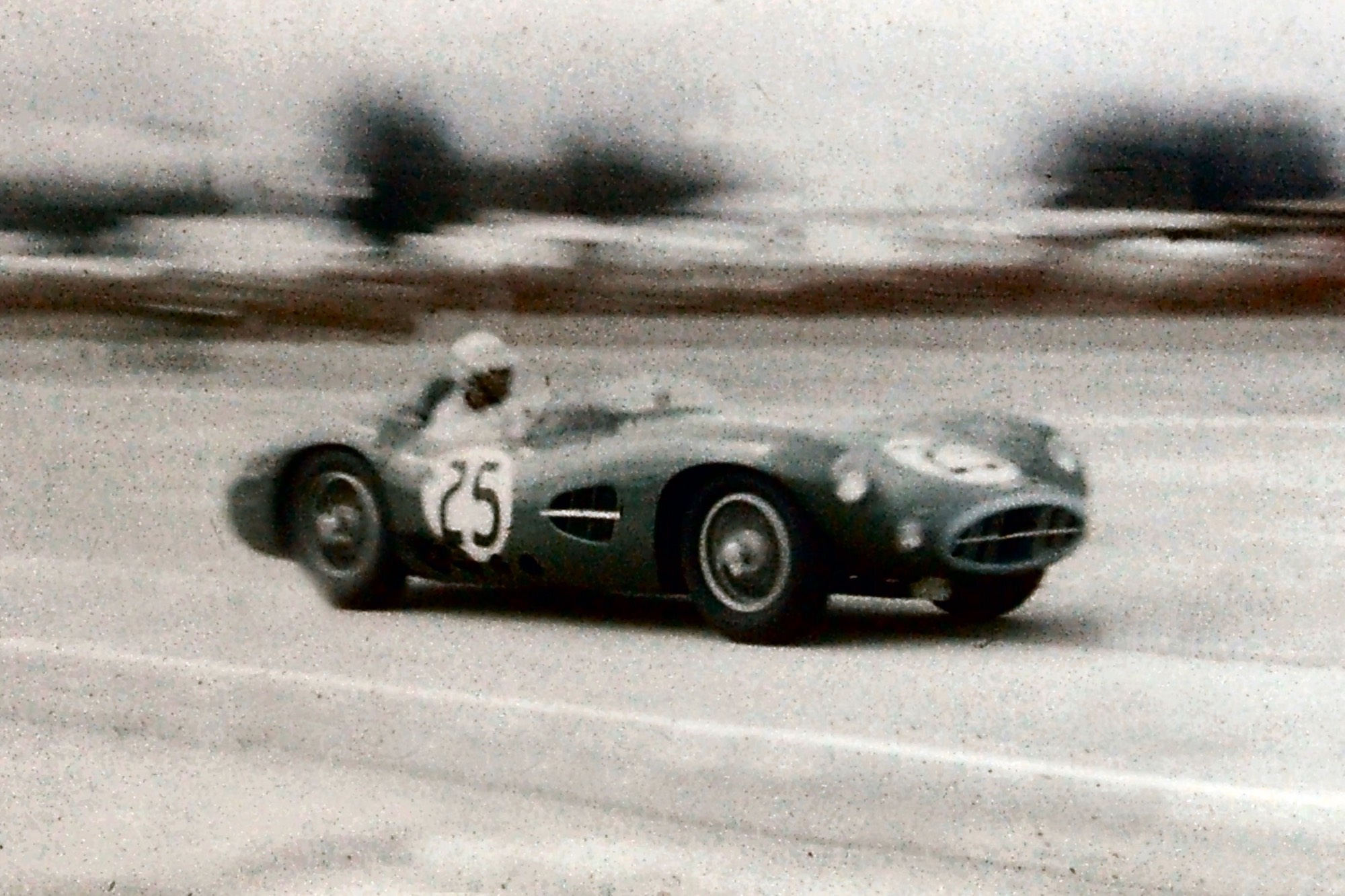 Unfortunately, Carrol was diagnosed with a hereditary heart angina in 1960, effectively putting the end to his sporting career. He decided to finish the 1960 season, even if it meant having nitroglycerin ready at all times when racing, prepared to jump start his heart again. Reportedly, he even raced with a pill under his tongue once or twice.

After stopping his racing career, Shelby sought other business opportunities. Back in Europe, AC cars of England struggled to find replacement for the inline-6 engine they’d been putting in their cars. Shelby suggested he’d find a suitable motor. Carrol intended to put an American V8 into these sports cars, since he was familiar with such concept back from when he was racing one of Max Bachowsky’s Old Yellers in mid-50s. GM did not cooperate with Shelby in supplying him with the motors in fears his project would become a competitor for their Corvette. Ford, on the contrary, had recently released their compact 221 cubic inch (3.6 l) V8 and were more than happy to create a competition for GM. Luckily, the motor fit in the car with minor modifications, giving birth to the legendary Shelby Cobra.

Debuting in 1962, Cobra was an immediate sensation among the racers and regular public alike. There are stories of Shelby repainting the first few Cobras that were lent to the press. This way, there seemed to be more finished vehicles than he actually had in stock.

While this publicity of Cobras drove sales and ensured profit, Shelby was still eager to try them on racetracks. He started doing so the same season. At first, these hot-rodded English roadsters were plagued by technical issues and struggled to beat their main rivals, Corvettes. Soon the mechanical weaknesses were mended and Cobras began dominating race tracks worldwide in 1964.

That year a Shelby Cobra in an aerodynamic Daytona Coupe guise outpaced Ferraris and finished first in its class at Le Mans. Shelby regarded sticking it up to Ferrari with a little hot rod as one of the greatest achievements of his life. Remember, the man had some strong opinions about Enzo. 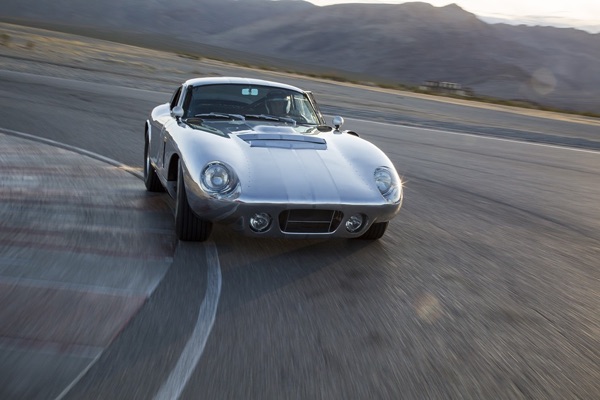 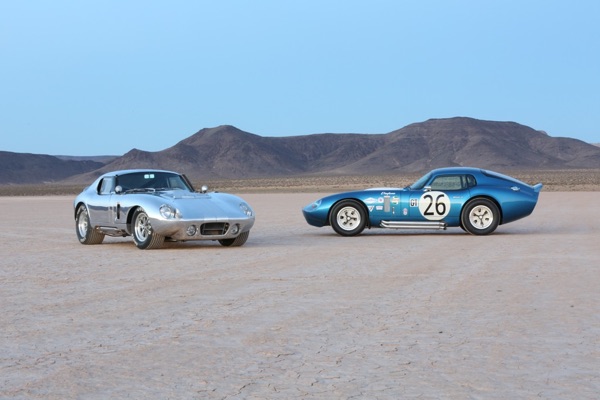 The following year Shelby Cobras won the international manufacturers' championship for Grand Touring cars. It became the first American designed car to do so. The aforementioned Daytona Coupes were used in faster tracks while smaller and nippier Cobras attacked tighter, more technical circuits. Beating Ferrari and other European teams was quite a feat from Shelby. He once said “The Cobra was the most archaic chassis, probably, with its two buggy springs and a pushrod engine, to ever go over there and win a world championship.”

Unsurprisingly, when Ford themselves set out to beat Ferrari in Le Mans, they turned to Shelby for help. That made perfect sense, as he was already working with Ford and he had won Le Mans both as a driver and as a constructor. Ford had a feud with Enzo Ferrari themselves after he had declined an offer to buy his company.

It was a matter of honor for Ford to win Le Mans, so incredible funds were thrown at the project and the greatest talent was attracted. From 1965, the GT40 project was led by Shelby himself. After a failure to finish in 1965, Ford made a roaring comeback with the infamous 1-2-3 win in 1966. The GT40o were driven to the victory by Ken Miles, Ronnie Buckum and Bruce McLaren (yes, that McLaren). 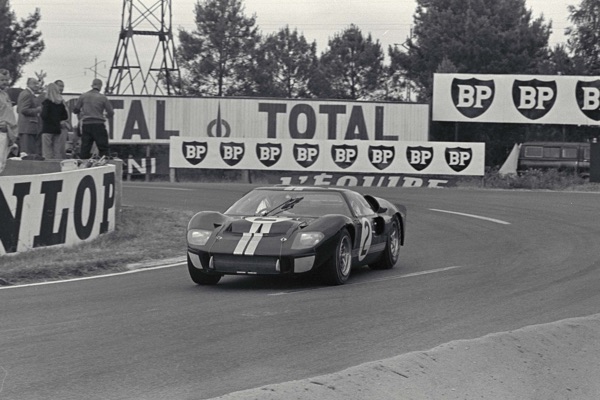 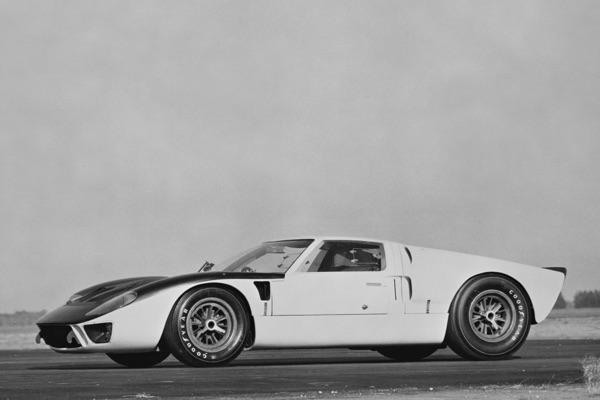 Ferrari was beaten at Le Mans three more times in 1967, 1968 and 1969, cementing GT40 as one of the most influential race cars of all time. At the same time, Shelby became the only person to win the prestigious endurance race as a driver, constructor and a team manager.

GT40 was not the only project Shelby was cooking up with Ford. Simultaneously, he was working on breathing in some liveliness into their shining new sports car – the legendary Ford Mustang. In 1965, Shelby stuck a modified Ford 289 cubic inch (4.7 l) V8, beefed up the suspension, improved steering and put stickier tires on Ford’s pony car. The result was a Shelby G.T.350, the meanest version of Mustang for sale at the time. 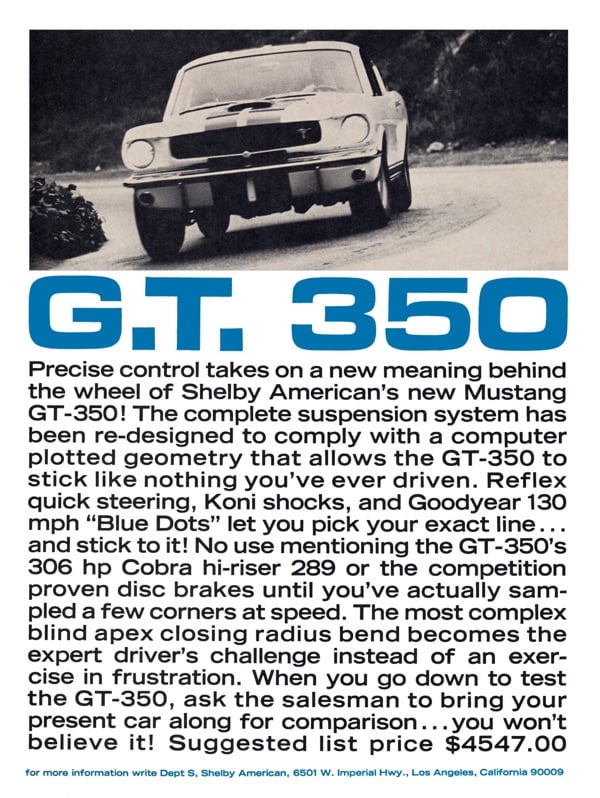 Naturally, a racing version was developed, dubbed G.T.350R and started competing in the SCCA championship. It differed very slightly from the original production G.T.350, the main difference being stripped-out interior. These changes were sufficient for G.T.350Rs to dominate the SCCA B-production class for three consecutive years.

Shelby also built a couple of different civilian versions of G.T.350, one of which, G.T.350-H, was even a rental. This was the first time a performance car was rented to everyone. Later Shelby stuck a massive 427 cubic inch (7.0 l) V8 to produce a Shelby G.T.500 Cobra.

In 1969, this fruitful and iconic partnership between Shelby and Ford came to an end due to disagreements between the parties and a shrinking sports car market. This, effectively, was the end of Shelby’s racing years. At the same time, Shelby stopped his motorsport operations and moved to different business ventures. Eventually he came back to designing and modifying road cars but was never involved in racing again.