Porsche 356 is the Aspirin of Cars

Sure, the original Porsche sports car may not help with your fever and it’s capabilities to alleviate aches are yet to be scientifically proven. But, much like Aspirin, the Porsche 356 is capable of tackling a wide variety of tasks – it can be a spritely cruiser if you want it to, the convertible version is perfect for that in warmer climates. Despite its tiny dimensions, the 356 can also fit a surprising amount of luggage or people, up to 4. Most importantly, while being a competent tourer, the 356 can become a very capable racer with very few modifications. Lightweight affords brilliant performance on asphalt, while rear-biased weight distribution helps with the traction of loose rally stages.

These motorsport capabilities shouldn’t be too surprising, considering the 356 originated as a racecar. Post-WWII, Porsche was run by Ferry Porsche, as his father, Ferdinand Porsche, founder of the company, was imprisoned by the French for Nazi affiliation (he was later found innocent). Ferry had an idea to build a VW-based racer for a while. In a 1984 interview for the CAR magazine, he revealed: “During the war I had an opportunity to drive a supercharged VW convertible with about 50 horsepower, which was a lot of power then. I decided that if you could make a machine which was lighter than that, and still had 50 horsepower, then it would be very sporty indeed.” 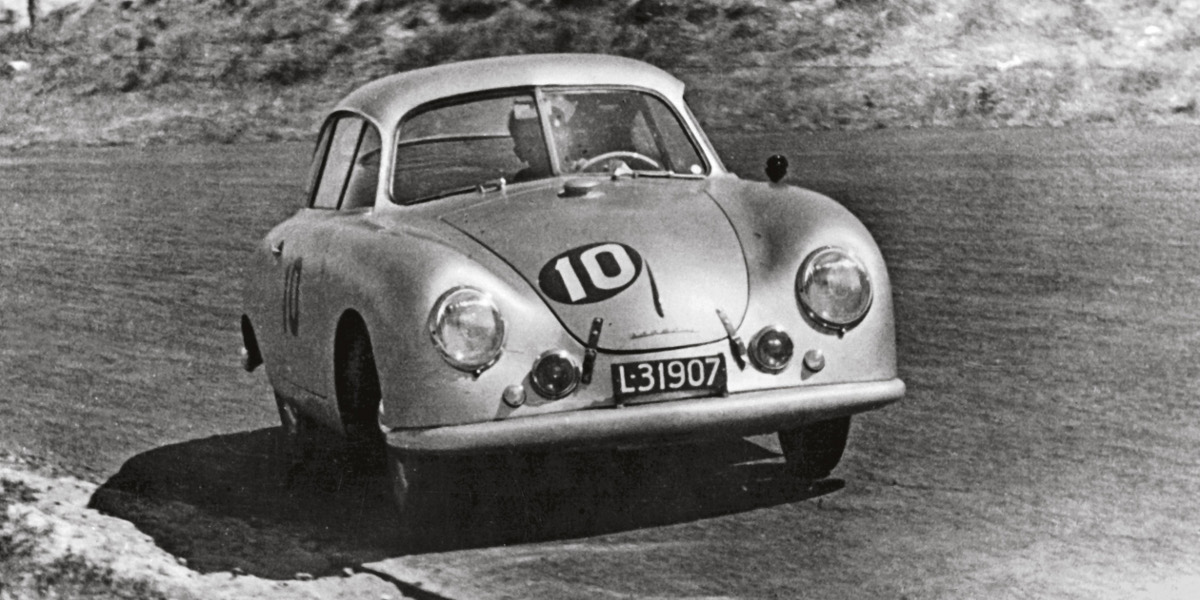 That was exactly the ethos with which the young Porsche set off to create the first car to bear Porsche’s name. Due to the war defeat, Porsche facilities were moved from their original Zuffenhausen near Stuttgart to Gmünd in Austria. The racecar developed there was named 356-001, and used a tube frame chassis with an aluminium body. This topless roadster was propelled by a VW-derived 1.1 l engine, mounted mid-ship. Despite its humble 35 bhp powerplant, the 600 kg machine was an incredibly spritely momentum car.

Serial production 356 made a switch to now-iconic rear-engine 2+2 coupe layout. Rearranging VW transaxle to conform to mid-engine layout was a tad fiddly. What is more, putting the engine right in the back afforded a more practical interior, a positive consequence of being based on the pragmatic Beetle. Now the car had a roof and could fit an additional couple of compact humans or, more realistically, some luggage for a weekend getaway. The body was a hand-beaten aluminium affair designed by Erwin Komenda, who previously contributed to the Beetle. Don’t be mistaken, despite clear ties to the people’s wagon, the 356 was a proper sports car with its tweaked engine and refined suspension. 50 of aluminium Gmünd coupes were built before the automaker made a move back to Zuffenhausen in late 1949.

Porsche’s Zuffenhausen facilities were still occupied by the allies and used as a storage facility, so a decision was made to move the manufacturing to a body and seat maker Reutter conveniently established just across the street. Reutter was then commissioned to produce redesigned 356 coupes and freshly developed convertibles in steel. The basic shape implemented then was retained until the end of model’s production.

After sorting out the road car production, Ferry Porsche still had racing on his mind, so he converted 7 of the Gmünd coupes into 356 SL (Super Leicht) racers and entered 4 of them to Le Mans in 1951. Three of the cars met their fate on the track, while one of them was driven to the victory in its class. The car proved equally competent on rally stages as well, winning 1952 Liège-Rome-Liège Rally. Although impressive, this was just a brief preview of 356 motorsport domination including countless circuit and rally races.

In 1954, the most ascetic 356 was introduced – Speedster. It was designed as a low-cost option for racers and sporty driving enthusiasts, and had a couple of bucket seats, low windscreen but lacked such luxuries as side windows. Coupled with a 4 cam Carrera engine this was an ultimate race-winning package touted by racers on both sides of the Atlantic. These days, the Speedster is the most popular 356 body type, with a host of companies replicating the car with varying accuracy. Despite track success, its sales declined and it was replaced by a tamer Convertible D in 1958. This new body type had two seats and a low windscreen but lacked the same sporting character the Speedster had.

Porsche is notorious for producing a dizzying variety of trim levels and engine options. This habit was present in the early days as well. For most of its production, the 356 was offered in 3 or 4 body styles and at least 3 engine options. Covering all of them would bore you to death so you just need to know that 356 was updated to a 356 A in 1955 and dropped the weak 1.1 l motor along with some other improvements. 1960 model year saw an introduction of 356 B, featuring bigger engines once more, going all the way up to 2.0. The last 1964-1965 iteration, 356 C, got disc brakes and, you guessed it, more capable engines. As for the trim levels, one could opt for a base 356, slightly faster Super, powerful Carrera or no-nonsense stripped out race car bearing a Carrera GT badge.

The price of Porsche 356

Air-cooled Porsches experienced an outrageous hike in prices in recent years, bad news if you’re after one. To make matters worse, quite a few of the 356s have simply rusted away due to the fact Porsche did not really nail the rust-proofing until 1970s. As a result, these rear-engined wonders cost a pretty penny. Expect to pay at least EUR 50,000 for a clean 356 B or C coupe with a base 1.6 l motor while earlier or rarer options can set you back several times more.