Navigating the World of Cobra Replicas

Elon Musk may have sent a Tesla Roadster to space, but that endeavour does not even come close to what Carol Shelby did to AC Ace. By shoehorning a Ford V8 and racing the little roadster from an obscure British manufacturer, he elevated the car to cultural icon status. There are very few cars that are so easily recognizable and so sought after. Few other cars are also so often replicated. But that is not a bad thing.

There are obvious advantages to owning a replica of a classic car. First, it does not cost a fortune (only the fortunate few can afford a real Cobra these days). Second, one does not have to worry about damaging an irreplaceable piece of history. Besides, it can be modified to the owner’s desire with no guilty conscience. Usually, the replicas sacrifice the authenticity and authentic experience of the original. Yet it may not be the case with Cobra.

From 1961 to 1968 a total of only 998 original Cobras were built. Of these 655 were 289 Cobras and 343 were 427 Cobras. In late 1968 AC stopped production of the Ace body. They continued to produce AC Cobras for Shelby until 1968. It has always been an ongoing project that was developed and perfected over time. Over its production run both AC in England and Carroll Shelby in the USA made tweaks to the iconic roadster. It was either to improve performance or to cut the production costs. 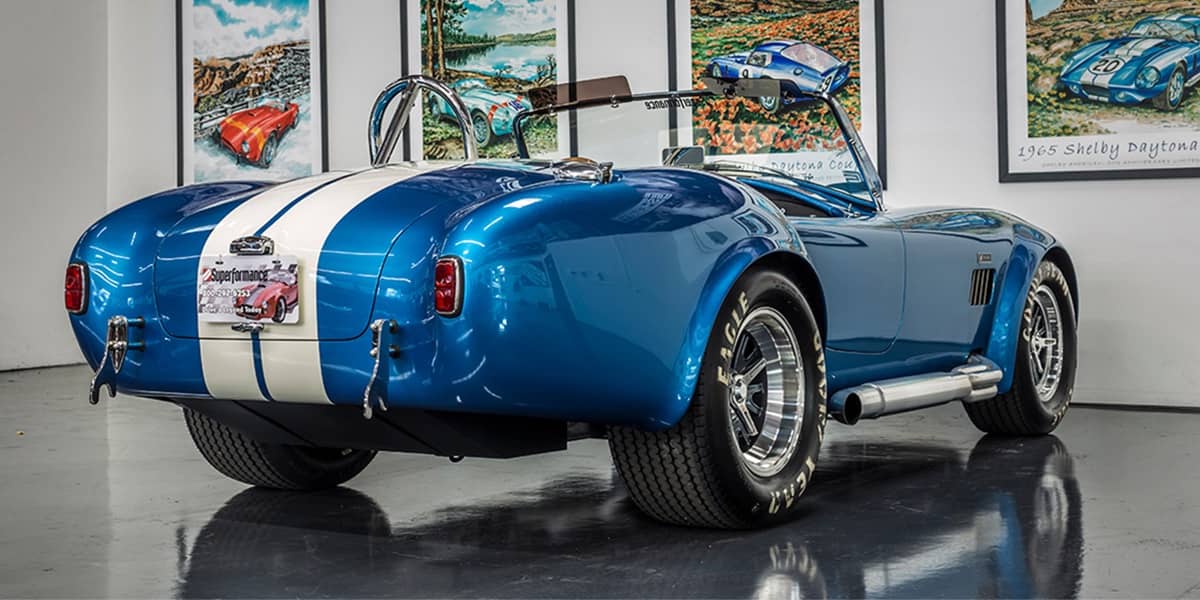 However, Carroll Shelby, a racing driver who won Le Mans in 1959 but was forced to retire due to a heart condition, was always keen to do both. Even the original cars in the 60s came with whatever engine Shelby could get from Ford, while many other parts were borrowed from automakers like MG or Volkswagen. Both Shelby and AC were relatively small establishments that needed to be resourceful and creative. And many replica manufacturers retain similar ethos. By using the best means, they can capture the essence of the original Cobra.

Companies like Superformance dedicated decades to perfecting the Cobra without losing its initial appeal. Right now, they offer a package that is true to the original. It includes small tweaks to aid the safety and comfort like uprated brakes, improved suspension geometry or optimized interior space. So, the driving experience of a Superformance Cobra 427 is still every bit as visceral and thrilling as the original, with the open cabin and loud exhaust pipes. It is so true to its roots, Carroll Shelby himself blessed Superformance with recognizing their products as continuation models.

If the thrill and not the authenticity is the end goal, companies like Backdraft or Gardner Douglas have something to offer. They took the original recipe and made it much spicier, with things like tuned powerful V8 or plenty of carbon fibre trim. All that in the gorgeous classic Cobra package that will make you look a bit like Steve McQueen. These Cobra recreations are blank slates for their owners, meaning they can choose virtually any powertrain and modifications of their liking while retaining the iconic shape.

As a result, not all Cobra replicas are created equal. Over the years, car makers produced some shoddy interpretations of this classic. While market forces have driven the worst offenders out of business, any buyer must do their research before making the purchase.

The price of Cobra Replica

If you want to have one of the Cobra’s replica in your garage, it will cost you at least USD 30,000 – 50,000. If done right, it is one of the most thrilling classic cars money can buy, combining performance, sensations and looks. There is a good reason why the Cobra formula remained unchanged for more than half of a century.

Replica is not enough for you? In fact, you may want to start saving now if you’re looking to add one of the original models to your collection.

The Shelby Cobra is an iconic sports car and its price starts at USD 300,000 – 500,000. However, the Cobra’s rarity, combined with its historical prestige, has led to some truly staggering numbers when a coveted Cobra comes up for auction. For example, the very first Cobra built by Carroll Shelby, which was used as his personal car and development prototype, sold for USD 13.75-million at RM Sotheby’s Monterey sale in 2016, at the time becoming the most expensive American car ever sold at auction.