The Exibit of the Most Important Lamborghinis of Cinema

The exhibit “Film Emotions – Lamborghini and the World of Cinema” was inaugurated at the Lamborghini Museum in Sant’Agata Bolognese. The exhibit showcases Lamborghini cars that have left their mark on the big screen, from the Miura of The Italian Job (1969) to the Aventador of The Dark Knight Rises (2012).

The exhibit layout is inspired by the mythical Hollywood Walk of Fame, with a runway marked by the iconic stars accompanying visitors through the most important Lamborghini models that have appeared in international films.

Incorporated within the permanent collection of the Lamborghini Museum, the exhibit is on display daily through 31 October 2018, from 9:30 a.m. to 7:00 p.m. 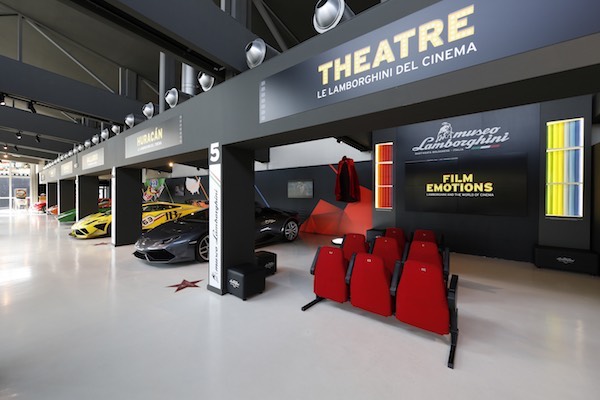 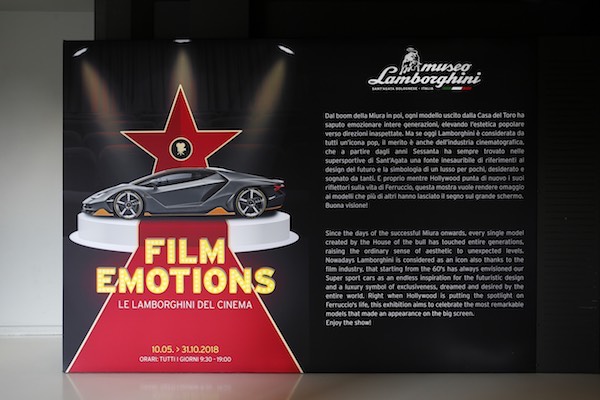 The models on display

At the entrance to the museum, one of the most significant models of the exhibit is on display: the Aventador of superhero Batman, an example in silver used in the film The Dark Knight Rises (2012, directed by Christopher Nolan). In the last episode of the Batman saga, the Aventador is the car owned by the protagonist Bruce Wayne, alias Batman, played by Christian Bale. This is not the first time that a Lamborghini has been used as the car of the wealthy magnate: in The Dark Knight (2008) it was a Murciélago LP 640 that Bruce Wayne drove through the streets of Gotham City, and the same model also appeared in Batman Begins in 2005. 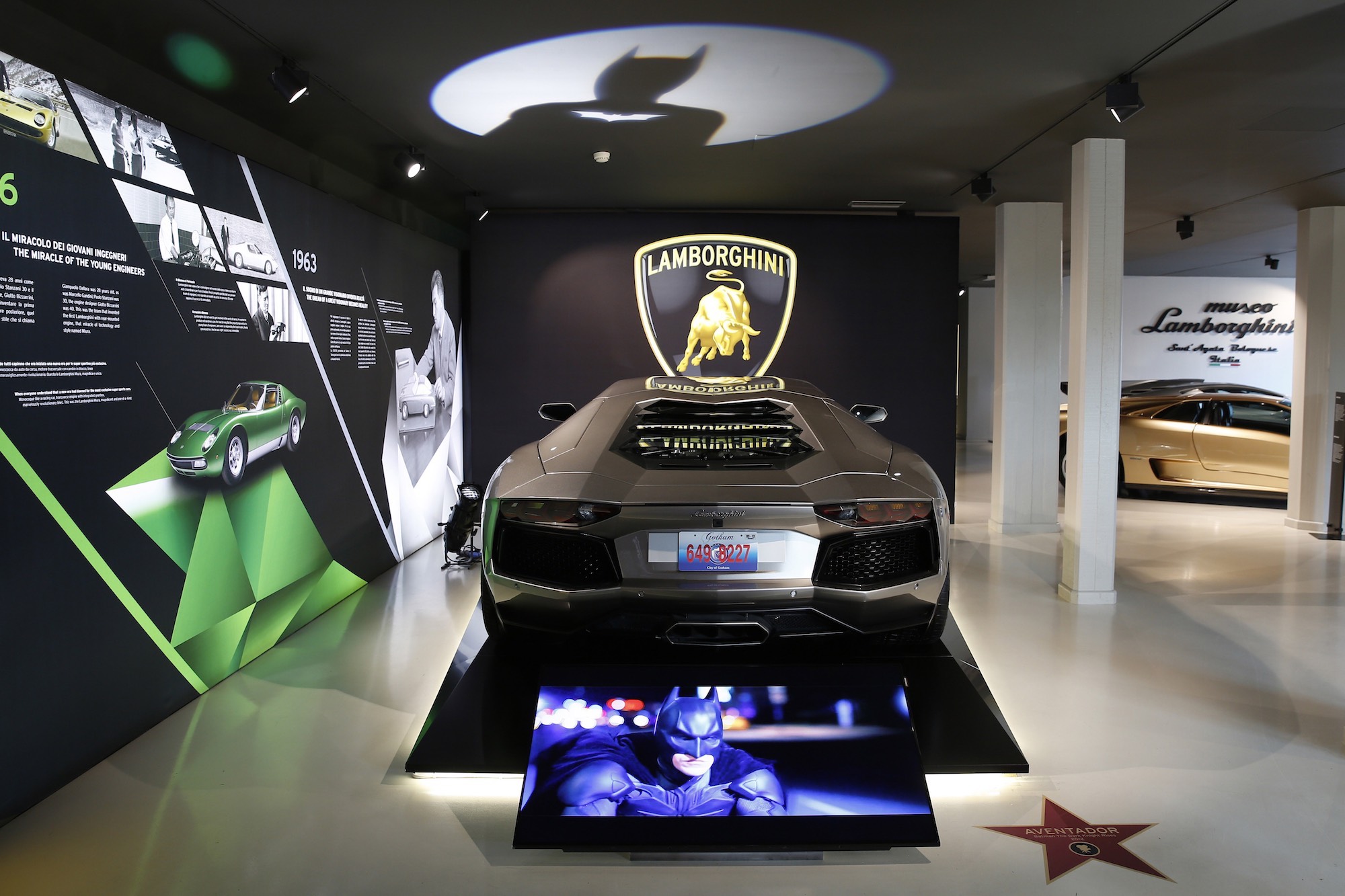 Also following the superhero theme is the Huracán Coupé in the Grigio Lynx (grey) color used by Dr. Stephen Strange (played by Benedict Cumberbatch) in Doctor Strange (2016, directed by Scott Derrickson) as a status symbol of the prestige of the world renowned neurosurgeon. Chosen for its iconic design and breathtaking performance, the Huracán became the fulcrum of the turning point in the film. 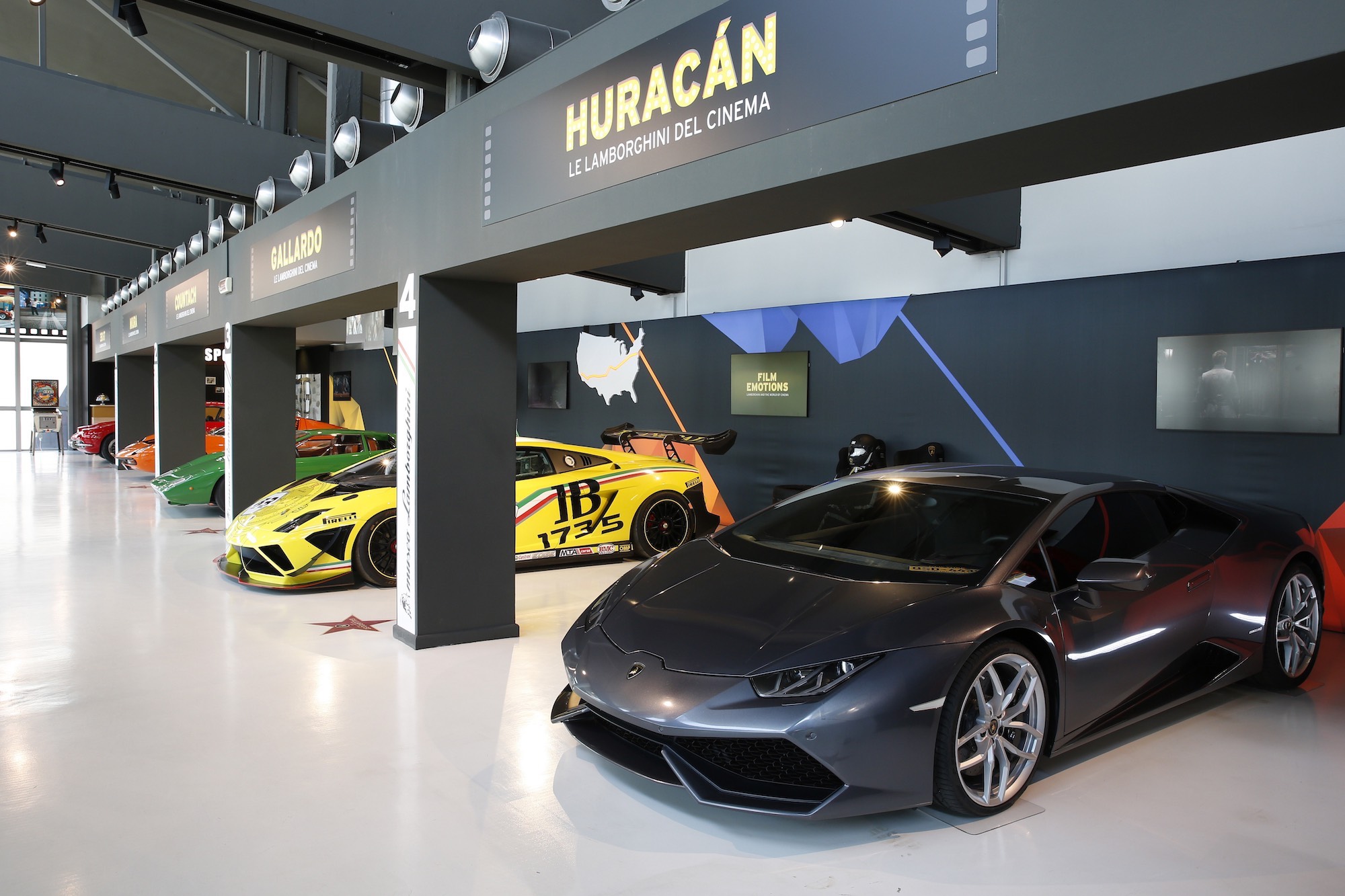 One of the highlights of the exhibit is the iconic orange Miura P400, in homage to the one used in The Italian Job (1969, directed by Peter Collinson). In the memorable opening sequence of the movie, the legendary Miura speeds along the St. Bernard pass amidst the snow and the notes of On Days Like These by Matt Monro, with actor Rossano Brazzi at the wheel before the fatal accident. 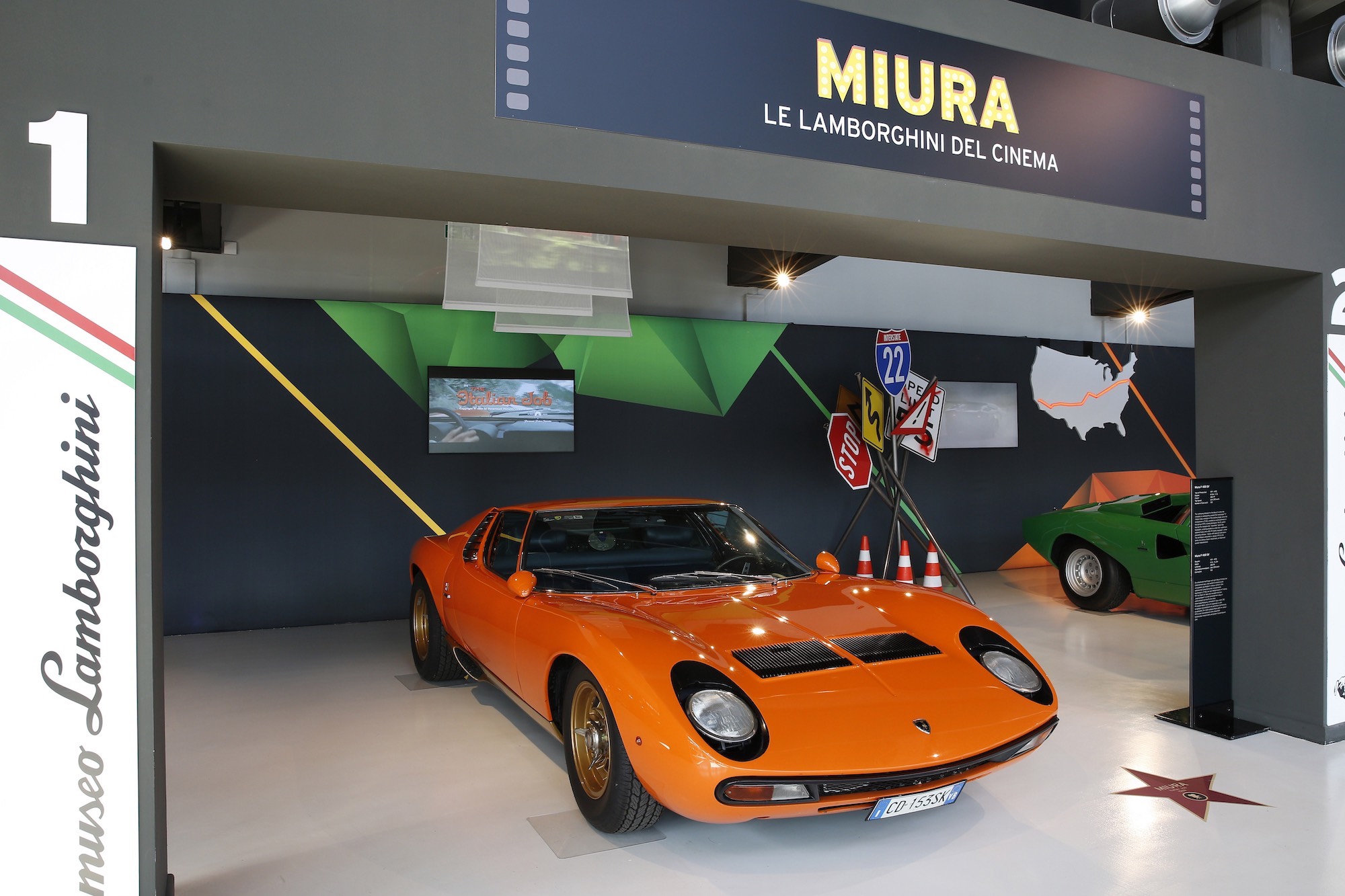 A green Countach evokes the one used in the opening scenes of The Cannonball Run (1981, directed by Hal Needham), where the Lamborghini speeds along the sun-soaked American highways that run between Connecticut and California. The iconic model adapts perfectly to the seductive nature of the provocative women driving it: Jill Rivers (Tara Buckman) and Marcie Thatcher (Adrienne Barbeau), who used charm akin to that of the car to achieve the final victory. 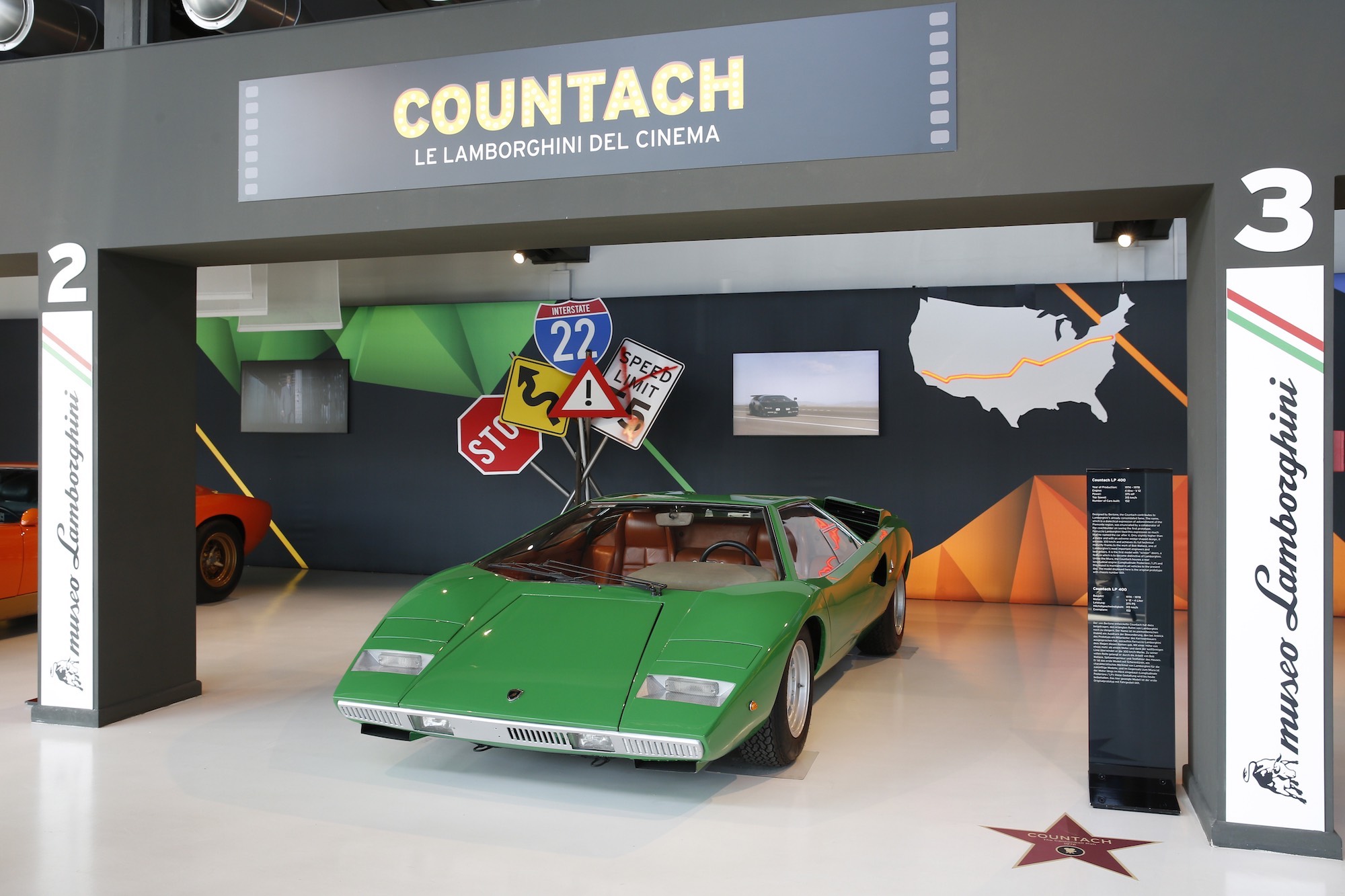 Another stand-out in the cinema itinerary is the LM002 featured in the film Fast&Furious 4 (2009, directed by Justin Lin), where it was used off-road by one of the antagonists of Dominic Toretto (Vin Diesel). 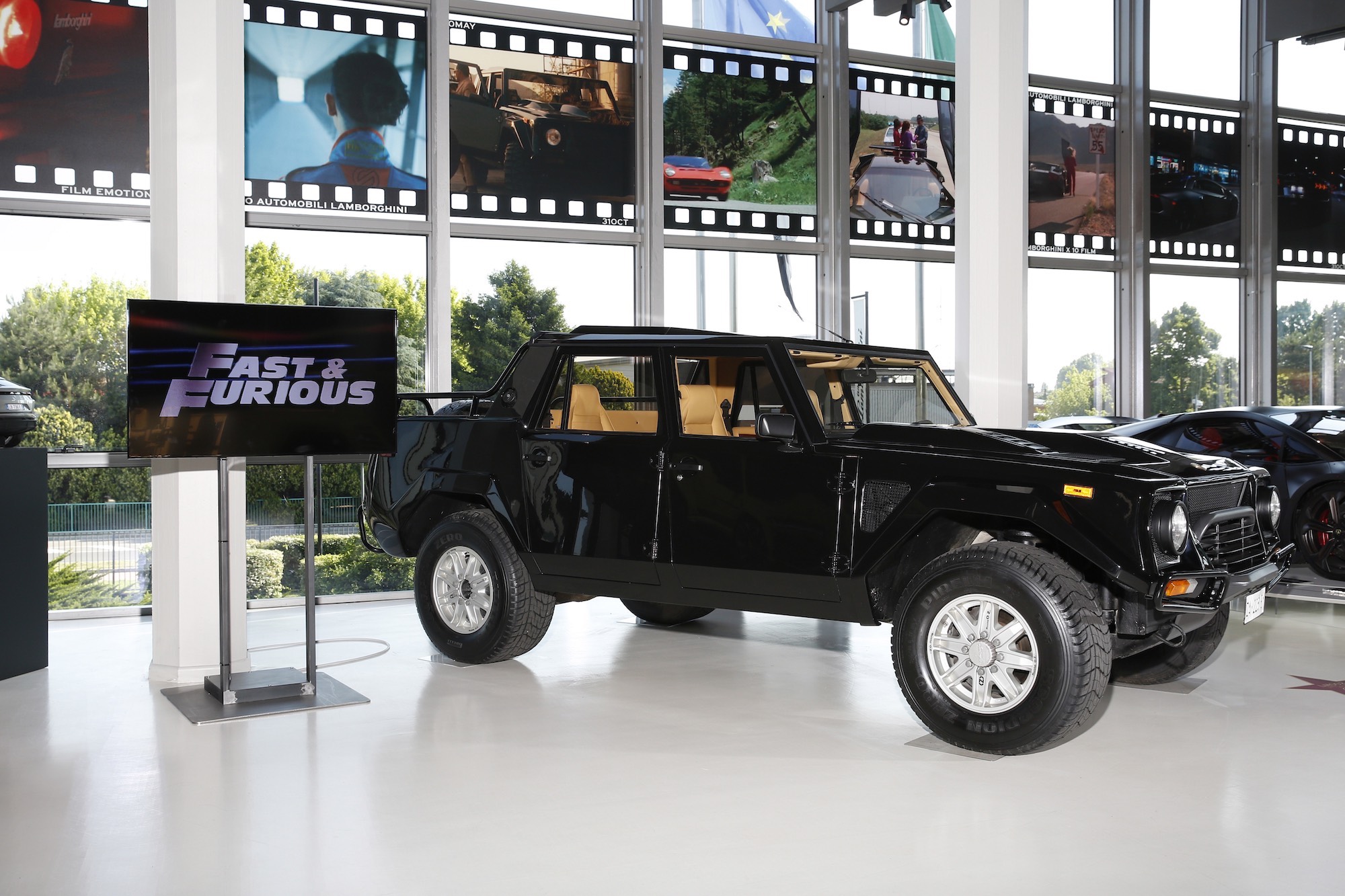 An example of a Jalpa in matt black is the one used by Sylvester Stallone in the film Rocky IV (1985, directed by Stallone himself). With its sharp, angular lines, the Jalpa perfectly fits the character of Rocky, reflecting his strong and determined personality. In the film, the car is framed numerous times to show its most characteristic details, especially in Rocky’s moments of introspection. An unforgettable scene is the one in which Rocky Balboa talks to his son about the job of the boxer while polishing his Lamborghini. 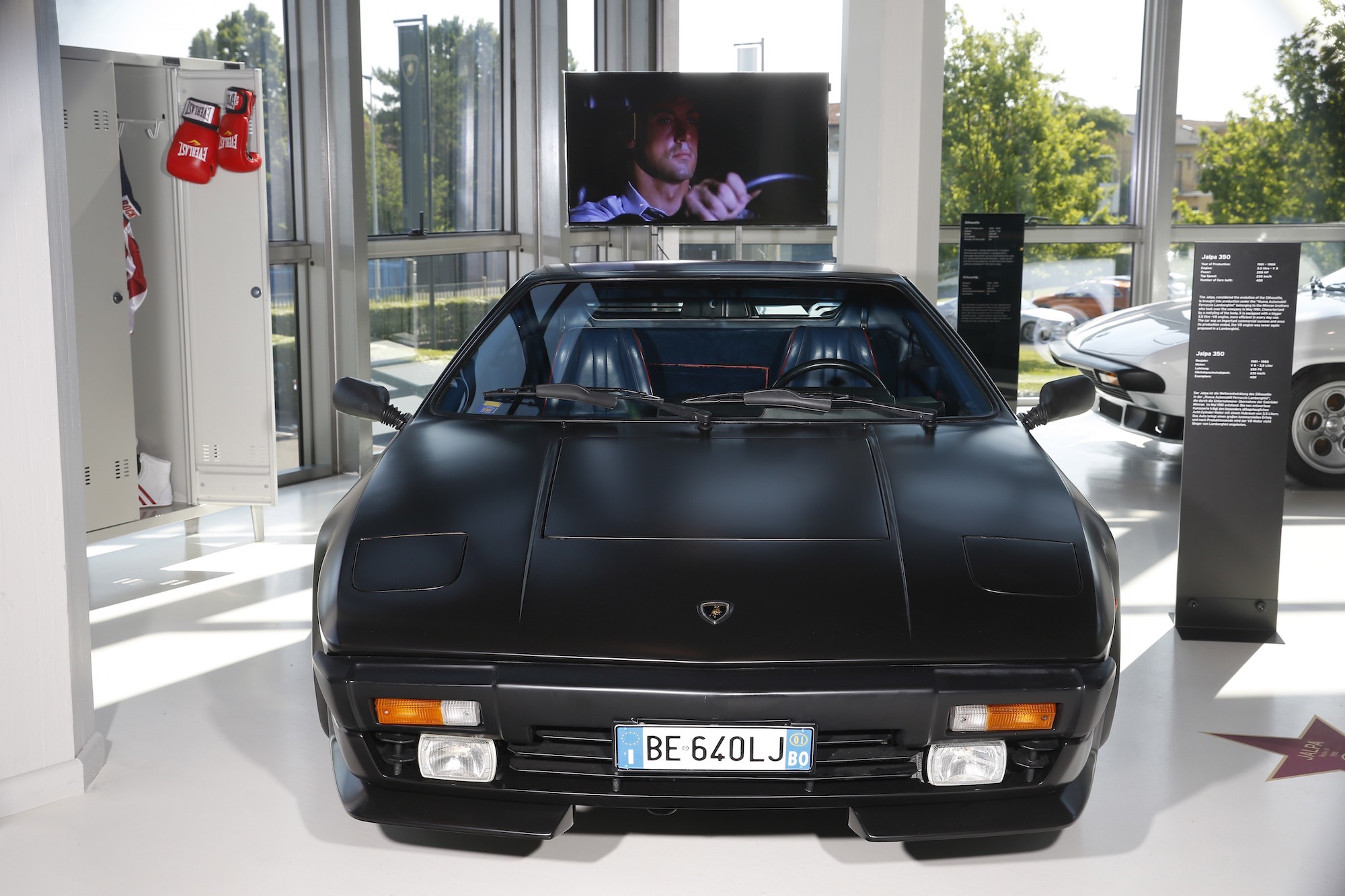 On the motorsport theme, a Lamborghini Gallardo Super Trofeo is the model that appears in the Italian film Veloce come il Vento (Italian Race, 2016, directed by Matteo Rovere), driven by Giulia de Martino (Matilda de Angelis) with the help of her brother Loris (Stefano Accorsi) in the Italian GT championship. 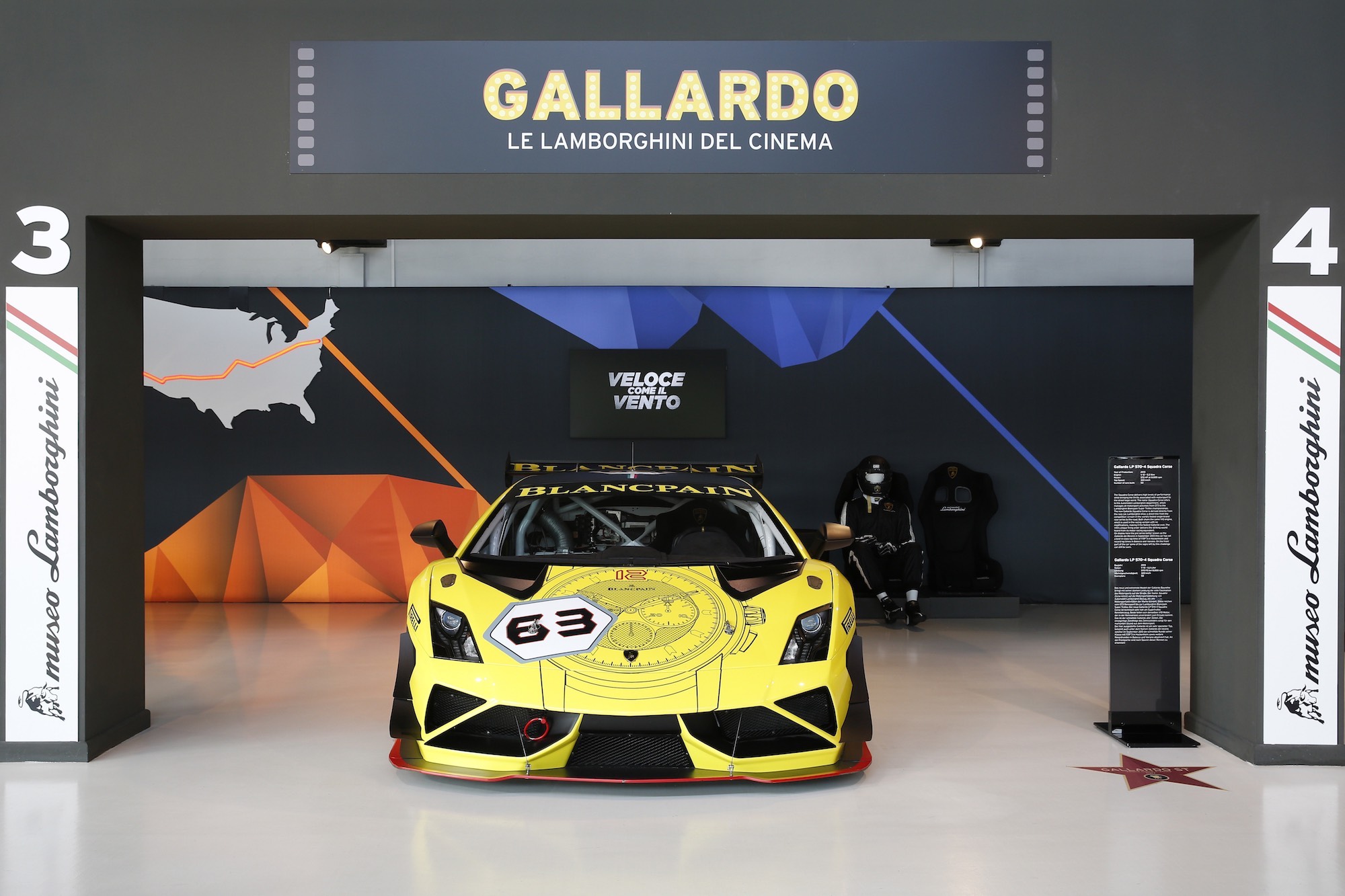 Also in homage to Italian cinema, the exhibition includes the red Lamborghini 350 GT from the film Bar Sport (2011, directed by Massimo Martelli), filmed right in Sant’Agata Bolognese. The first Lamborghini production car in the brand’s history, the car features in a setting recalling the furnishings of the mythical café described by Stefano Benni in his novel of the same name, amidst the juke box, the wooden bar counter, and the mythical Luisona: the pastry of unknown age that can be found in every Bar Sport in Italy, where no one has ever had the courage to eat it. 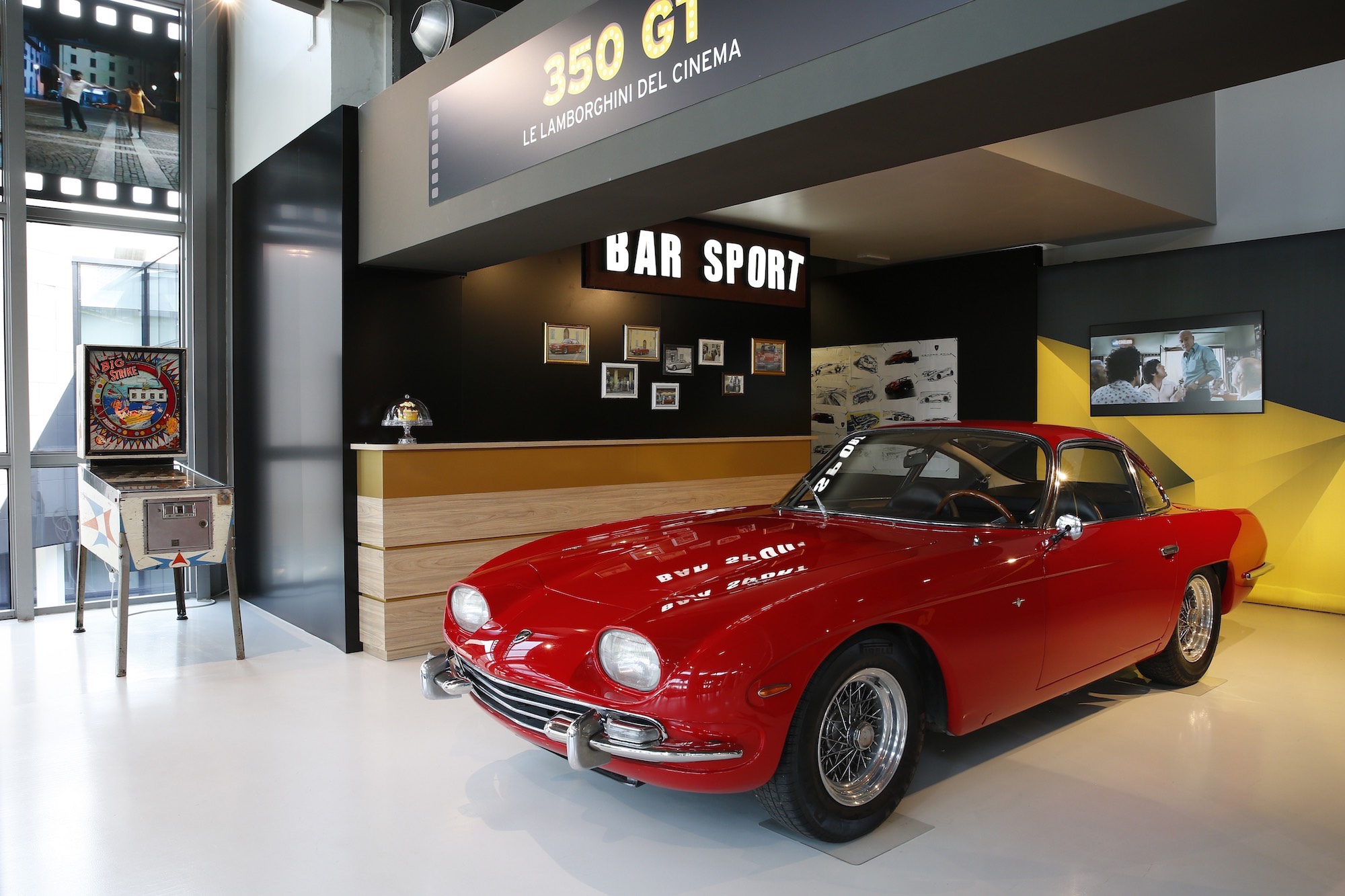 Cinema enthusiasts can also challenge themselves with a cinema quiz via a digital totem, guessing the two films in which the protagonists were the Lamborghini Centenario and the Sesto Elemento. Then, in pure film-festival style, there is a selfie panel for visitors to portray themselves as real stars among the other stars of the automotive world. 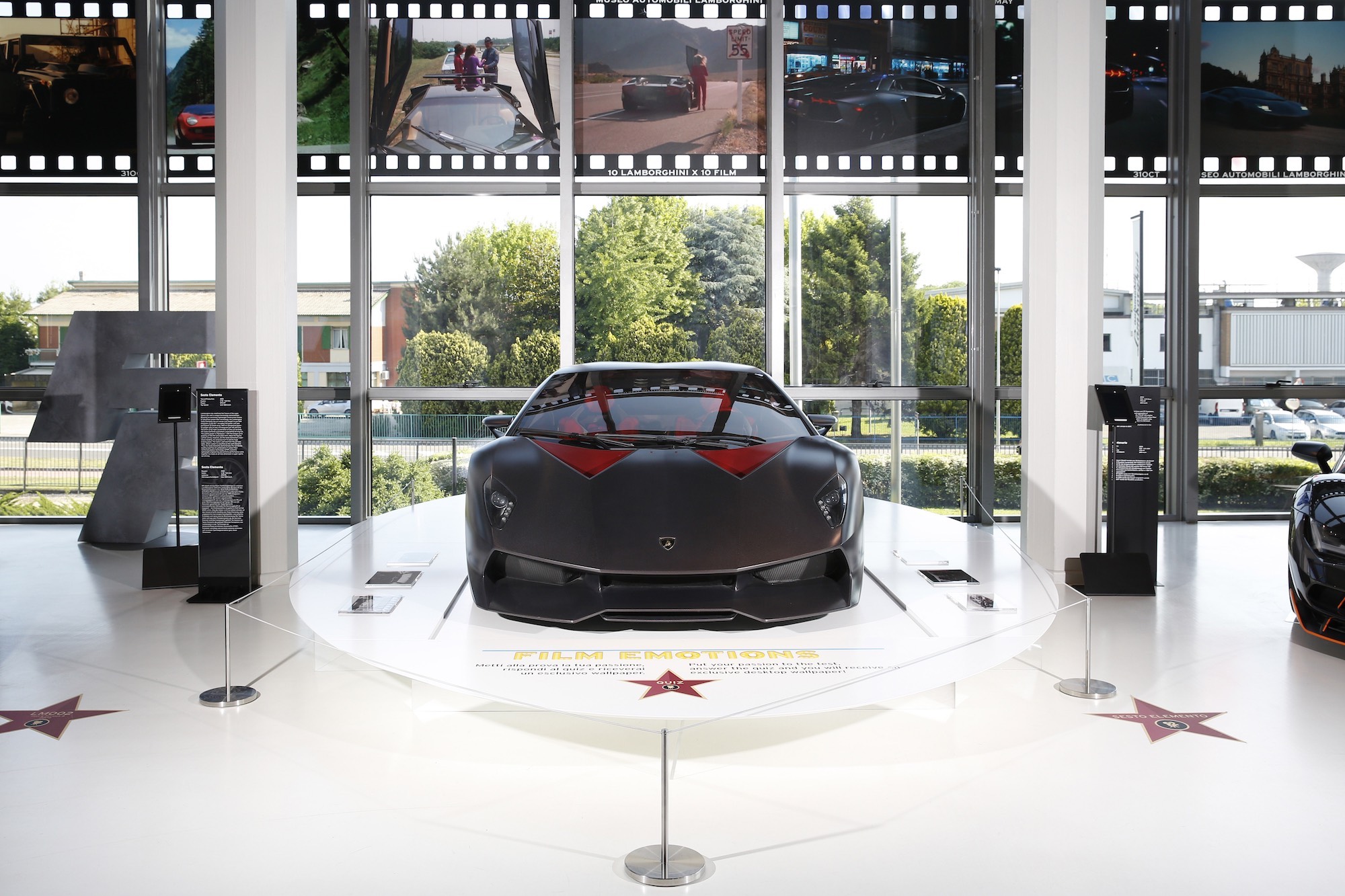