The E38 Generation BMW 7 Series Is The Luxury BMW The World Needs Today - Here’s Why! 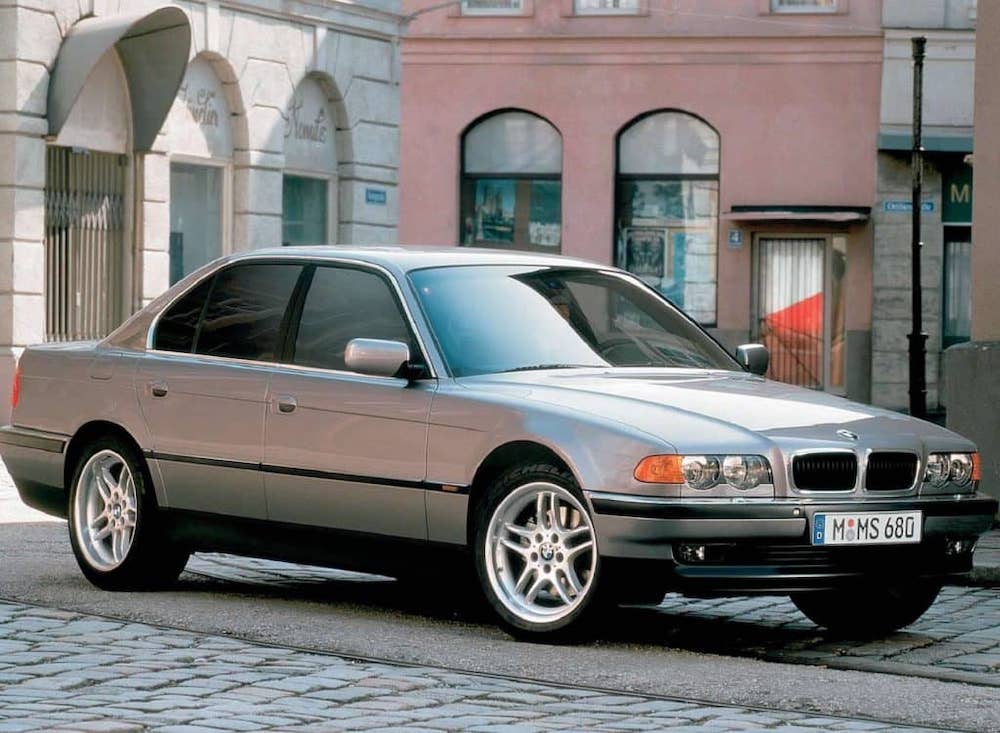 In recent years, there have been a few things to divide the online world. Forgive me for showing my age here, but the most recent has been The Dress That Broke The Internet. Probably.

That is until now.

As you may have heard, BMW recently launched a new version of its 7 Series luxury sedan flagship, the G70. Boy, has it split opinion.

“Vulgar”, “unpleasant”, “hideously ugly” are but a few of the descriptions thrown at the G70’s new, striking design. Meanwhile, there are those who praise BMW for its new bold direction - after all, it’s impossible to argue against the fact that the 7’s new look has steered it in a completely different direction to the understated luxury aesthetic of rivals such as the Mercedes-Benz S-Class and Audi A8. 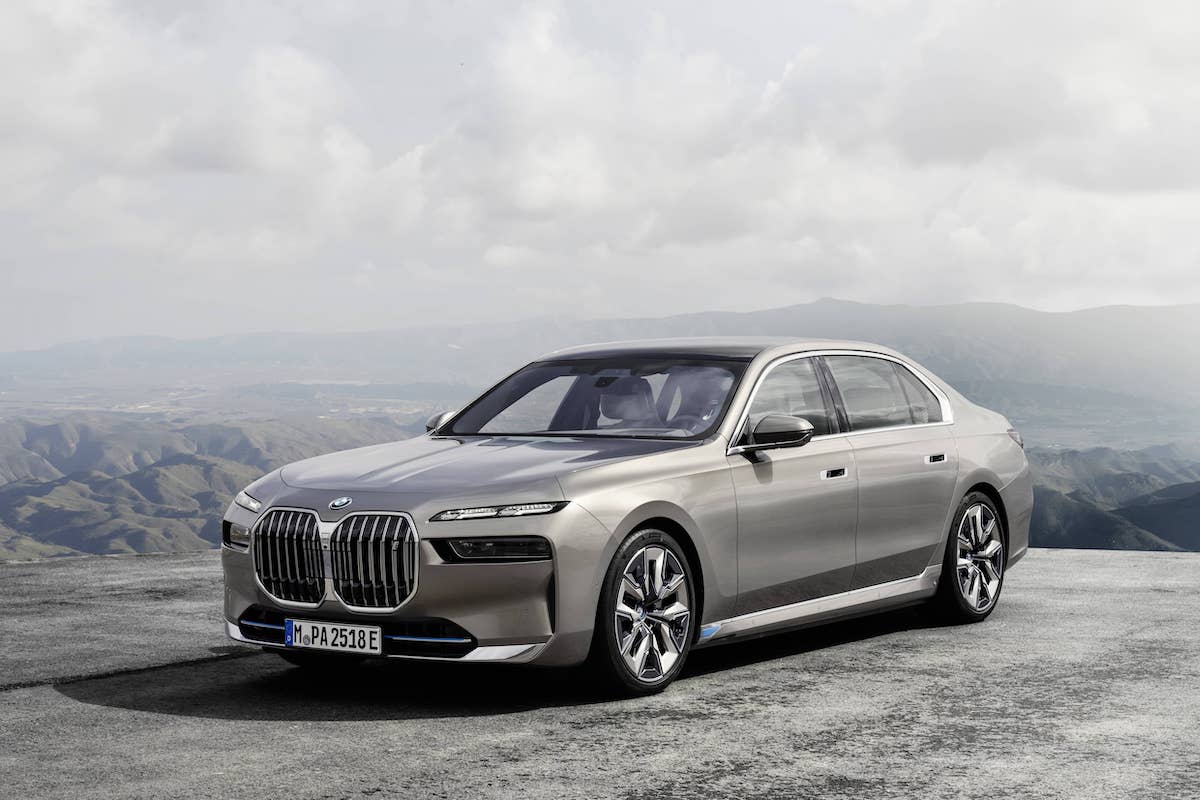 The latest version of the BMW 7 Series, the G70, is a car that has divided BMW fans
© BMW Press Club

The split configuration of the latest 7’s headlights and running lights are definitely a talking point. Then there’s that HUGE grille, which dwarfs the (so-called) controversial design found on the BMW’s iX, i4, M3 and M4 models.

Finally, the design of the car’s rear heralds the return of something akin to the Bangle Butt found on the much-maligned E65 7 Series from three generations back…

Anyway, commenting on the G70’s styling is largely pointless. BMW doesn’t care about what any of us think because this look is what the average 7 Series buyer - most of whom are found in the United States and China - wants. Apparently.

What we can all agree on though, is that the new 7 Series does look utterly excellent on the inside. It’s a BMW - there won’t be any squeaky, subpar plastics. Again, it’s a BMW - everything will be top-notch to look at and lovely to touch.

As-per automotive interior trends design these days, the new 7 comes with plenty of screens. In fact, BMW has even introduced the Theater Screen, an optional 13-inch 8k behemoth to entertain rear passengers as they’re enjoying what will be an unbelievably smooth and relaxing ride.

As the screen whirrs down from its roof mounts, blinds rise and darken the rear cabin to create a fully dark cinematic experience. Whilst this piece of automotive theater is taking place, a Hans Zimmer soundtrack is piped in. This, undoubtedly, is our favorite thing about the new 7 Series. 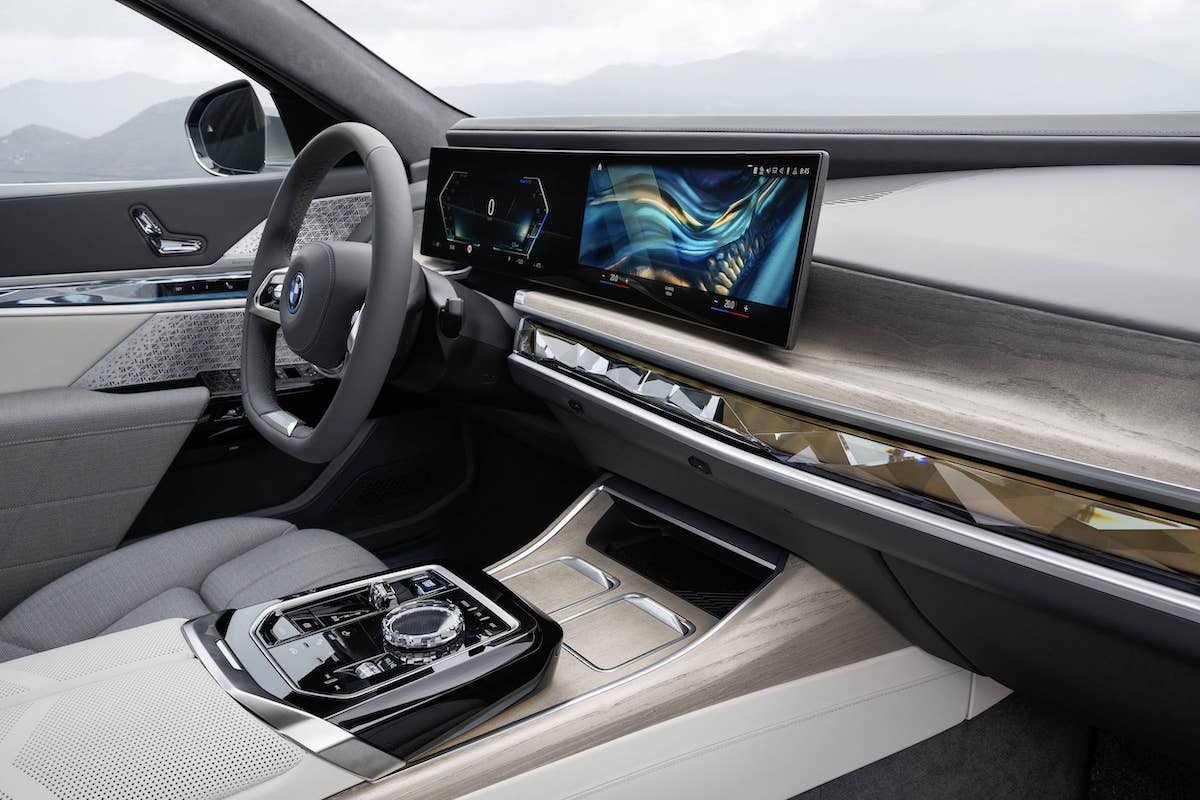 Whatever you may think about the design of the latest 7 Series, there is no denying that the interior is a masterpiece
© BMW Press Club

Make no mistake, this will be an outstanding car. Perhaps most importantly, it will show the automotive world that a flagship luxury sedan need not be a staid design. After all, the hullabaloo around the latest M3 and M4’s appearance has more or less died down in all but a few angry corners of the Internet.

But this new 7 Series does raise a few important questions that the entire car community should be asking itself.

Firstly, does all of this flamboyant design and mindblowing tech mean that luxury cars are becoming glorified extensions of our electronic devices, and not what they were originally designed to be?

On the other hand, does the G70 mark the point where buyers will say enough is enough, and demand a return to a simpler type of luxury car both in terms of innovation and design? 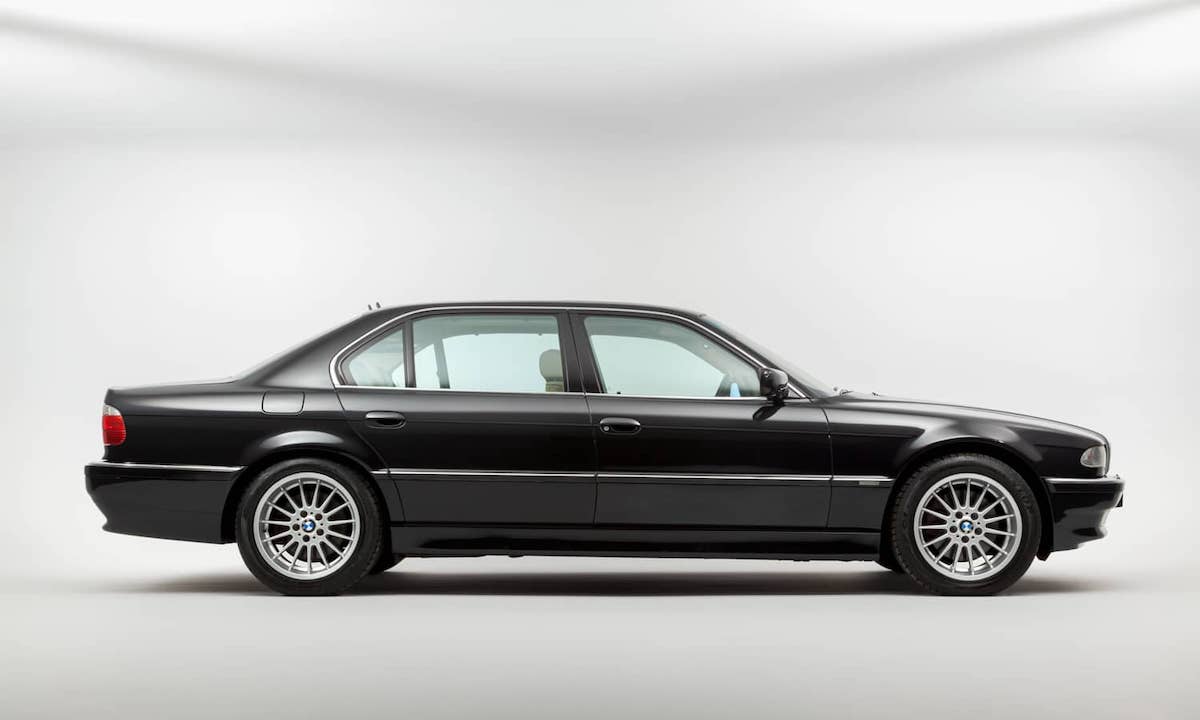 There is literally nothing wrong with this
© Classicsandsupercars.co.uk

BMW history is filled with legendary designers. These include Paul Bracq who oversaw the E21 3 Series, and Joji Nagashima whose creative vision came up with masterpieces such as the E39 5 Series and the E36 3 Series. We then have Chris Bangle, a man whose name splits the BMW faithful into camps of pearl clutching or applause due to the controversial ‘flame surfacing’ design philosophy he introduced to the brand in the early 2000s. The designer of the E38 7 Series is Boyke Boyer. Despite being part of BMW’s design department for over 30 years, the E38 is the only car you’ll find listed as an outright Boyer design. Try finding any more about this enigmatic Austrian and you’ll struggle - he doesn’t even have a Wikipedia page. How cool is that, though? Penning what is considered to be one of the most beautiful BMWs of all time, then leaving it for everyone to enjoy without making a grand exit.

Launched In 1994, The E38 Was The Last BMW 7 Series With An Almost Fully-Analogue Cockpit (And It’s All The Better For It!) 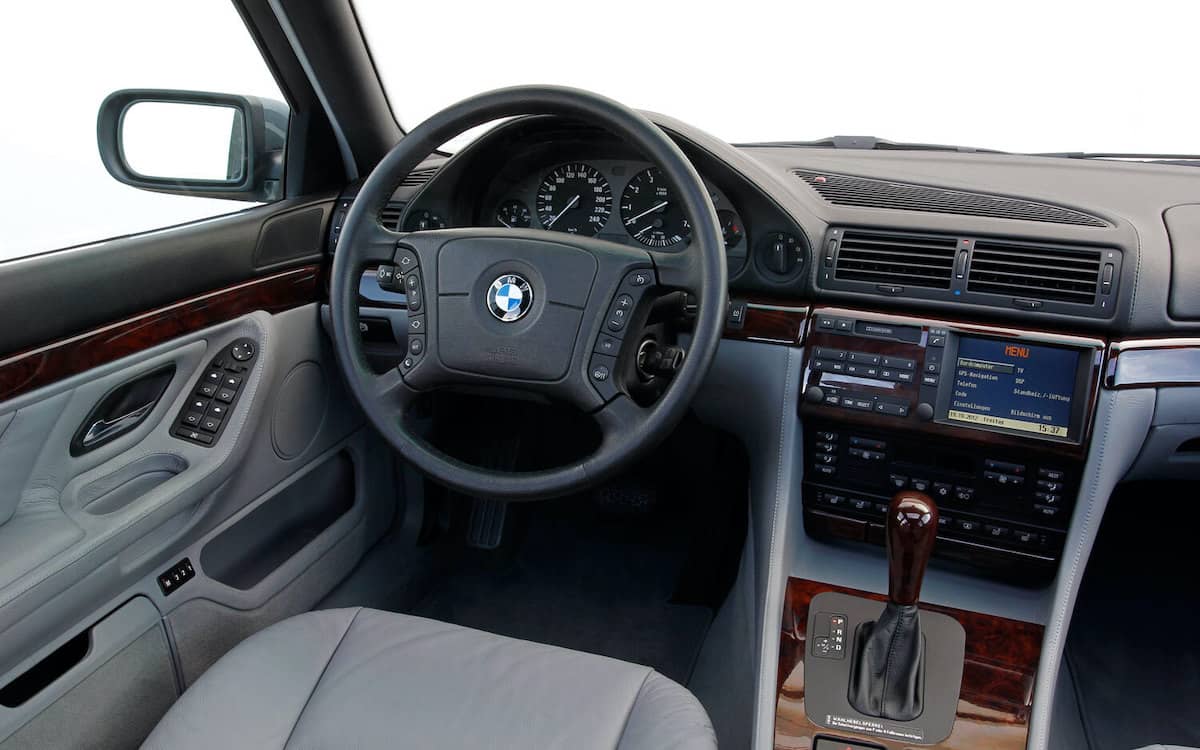 No screens, no Apple CarPlay… the cabin of the E38 7 Series is a throwback to simpler times for BMW and the car industry as a whole
© Autograf.cars

We enjoy plenty of the new technologies that come fitted to cars these days - the miracle that is Apple CarPlay being a case in point. Yet we can’t help but think it can be excessive at times. Surely with the growing number of screens found in car cockpits in 2022, that’s asking for more to go wrong. Anyway, we’re not technicians so we don’t know. What we do know though, is that we very much enjoy the simplicity found in modern classic cars and the E38 7 Series is a case in point. There is a steering wheel, analogue dials, and the center console angled towards the driver in that old school BMW way. That’s about it. The E38 was also the first European car to offer satellite navigation. The loveliness of the cabin found in this generation of 7 Series was only amplified when BMW replaced it with the Bangle-designed E65. This was the first car to come fitted with BMW’s then-hateful iDrive system. iDrive is decent now, but in its early days, it was… well, we’ll let Doug DeMuro take over from here because it’s too painful to describe in words. Don’t say we didn’t warn you.

BMW Put Their Silly Hats On And Allowed You To Fit To Fit Your E38 With A 5.0-Litre V12 And A Manual Gearbox 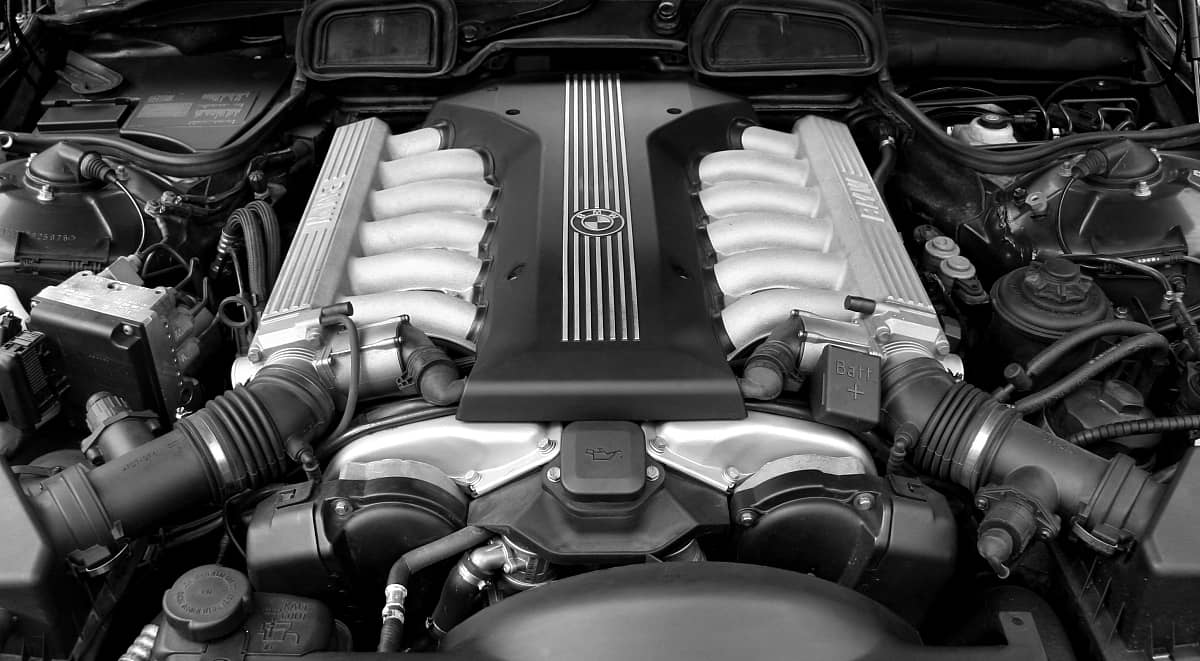 BMW offered the E38 7 Series with a V12 engine and a manual gearbox - imagine
© Flickr.com

From the E32 to the G11, BMW always offered the 7 Series with a V12 engine. In addition to the range of silky smooth 2.8-litre, 3.0L, 3.5L, and 4.0L petrol units, the E38 was available with BMW’s much-loved M73 5.4L V12 engine found in the E31 8 Series -that’s the original one with the pop-up headlights -and the Rolls-Royce Silver Seraph. A modified version of this particular engine was also fitted to the Alpina B12 - the E38’s stupidly cool, and lesser-spotted brother. Those who bought their E38 740i with the 282bhp 4.0L V8 could also spec a five-speed manual transmission which transformed an already-good-to-drive into a very-good-to-drive car. Don’t believe us? Ask Thomas and James from Throttle House. 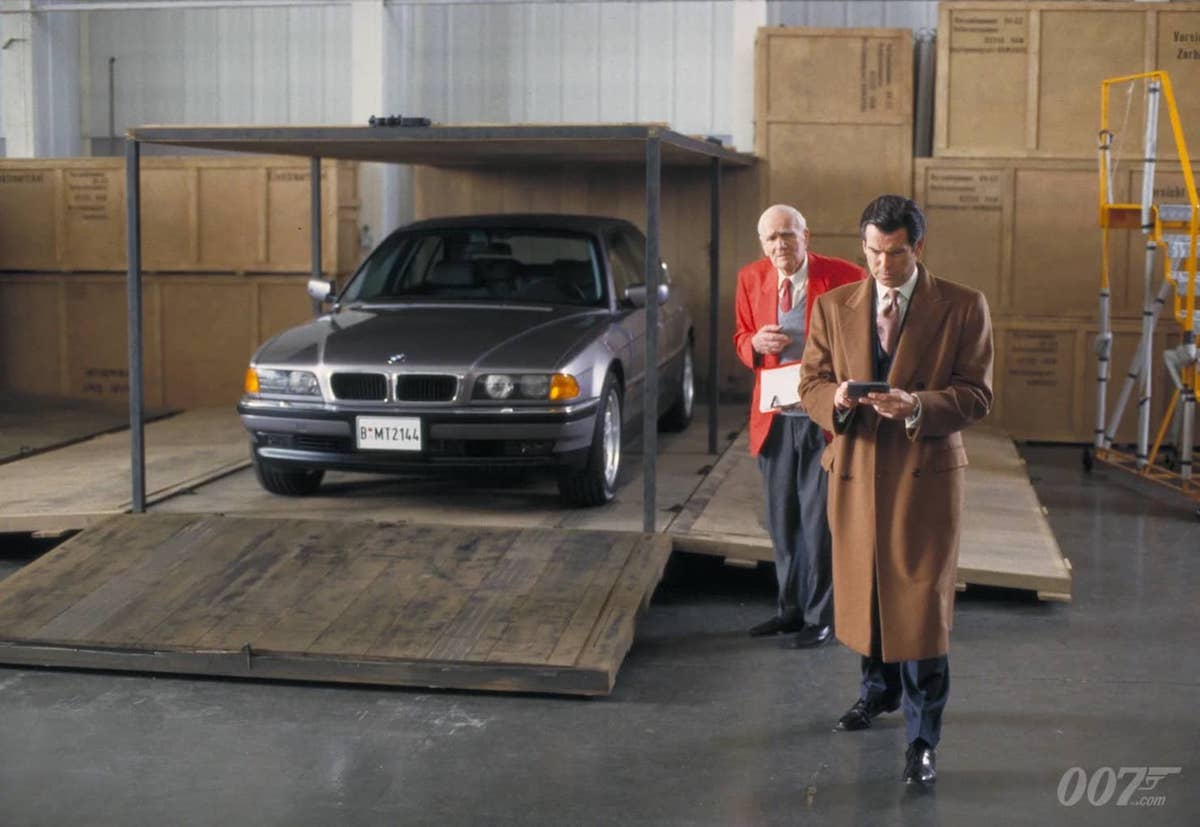 This is way cooler than the trad cringe Bond/Aston Martin marketing
© 007.com

Hear us out - and it’s not because most of us at Dyler.com grew up in the 1990s - but the 750iL driven by James Bond in Tomorrow Never Dies has one of the coolest Bond cars ever. Packing enough firepower to defend a medium-sized nation, 007’s E38 had “a few optional extras installed” including a sunroof-mounted rocket launcher with 12 short-range rockets, tear gas emitters behind the wheel arches, and a caltrops dispenser to dispose of bad bastards in pursuing vehicles. Some 25 years ahead of its time, Bond’s 7 Series could also be started and driven wirelessly through his mobile phone. Interestingly, however, none of the cars used in the epic Tomorrow Never Dies car chase were actually 750iL V12s - they were all rebadged 740i V8s. 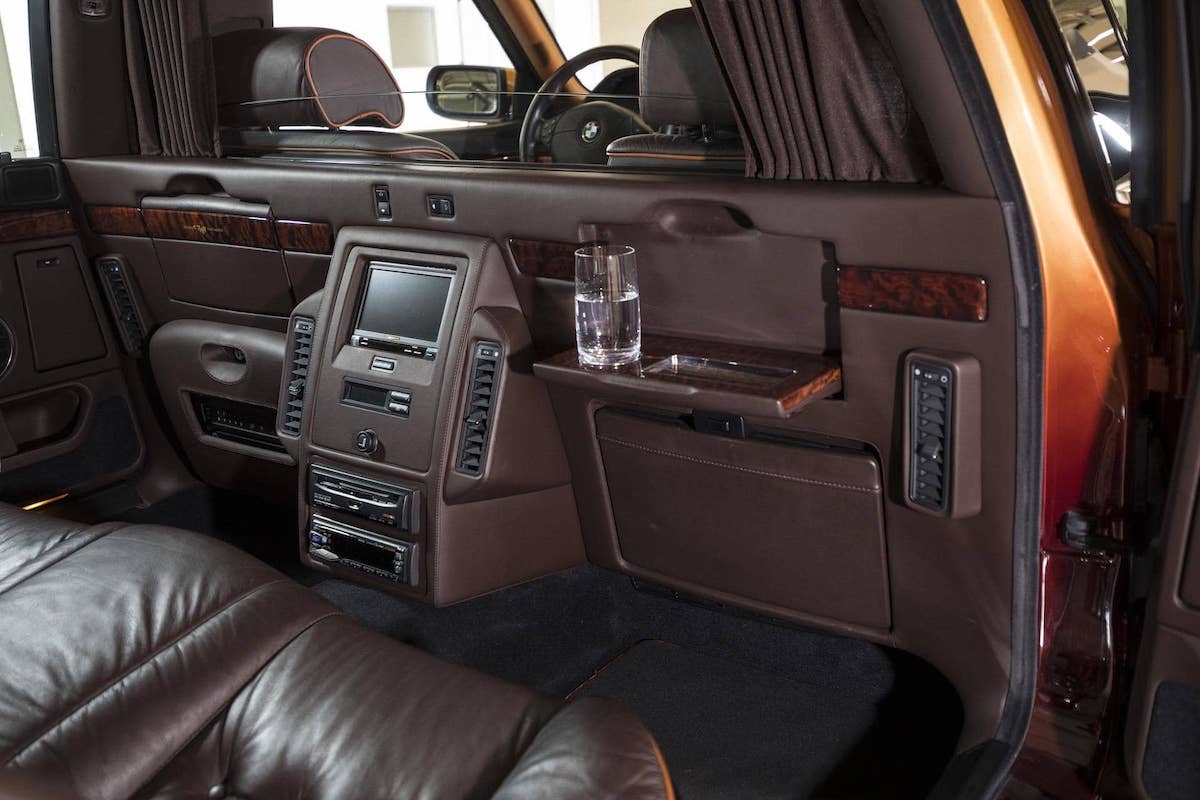 Back in 2000, BMW requested German fashion designer Karl Lagerfeld to try his hand at creating an E38 reflecting the luxury and modernity found in his work. The designer obliged and the result was this - a one-off version of the L7; a stretched-out version of the E38 which was 10 inches longer than the standard long-wheelbase 750iL. The Lagerfeld car was finished in Chestnut Brown over Gold Orange metallic, but that wasn’t the most striking thing about it. Inside, the car was decked out in quilted chocolate brown leather with a contrasting orange thread. Inside, the infotainment and communication systems reflected the tastes of the time and of course included a fax machine, an on-board telephone, a VHS player, a refrigerator, plus fold out tables in the rear. If you hadn’t quite realized how bespoke this E38 was, BMW embossed Designed by Karl Lagerfeld(in gold, of course!) on the car’s wood trim. Tasteful. Sort of. 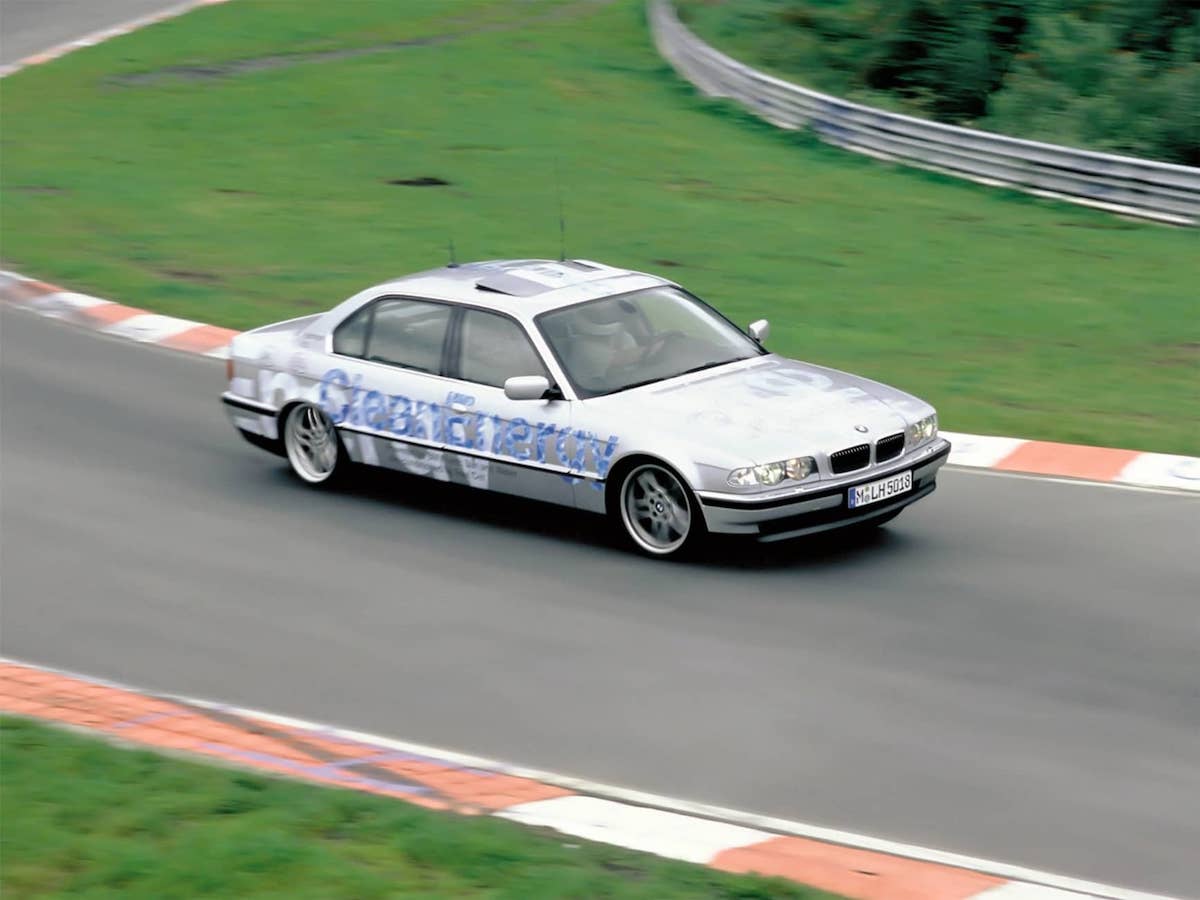 Back in 2001 BMW fitted 15 E38s with 12-cylinder hydrogen combustion engines to showcase the benefits of hydrogen technology. The 750hL cars could run on both hydrogen and petrol. When powered by hydrogen alone, the 750hL would accelerate from 0-62mph in 9.6 seconds and reach a top speed of 140mph. To show the world that cleantech could still be fun, BMW decided to hurl a 750hL running solely on hydrogen around the Nürburgring Nordschleife. The lap time? 9 minutes and 53 seconds. Whilst not a remarkable time by today’s standards, don’t forget that this was over 20 years ago in a range-topping luxury car. That makes the 750hL one of the coolest “what ifs” in car history. 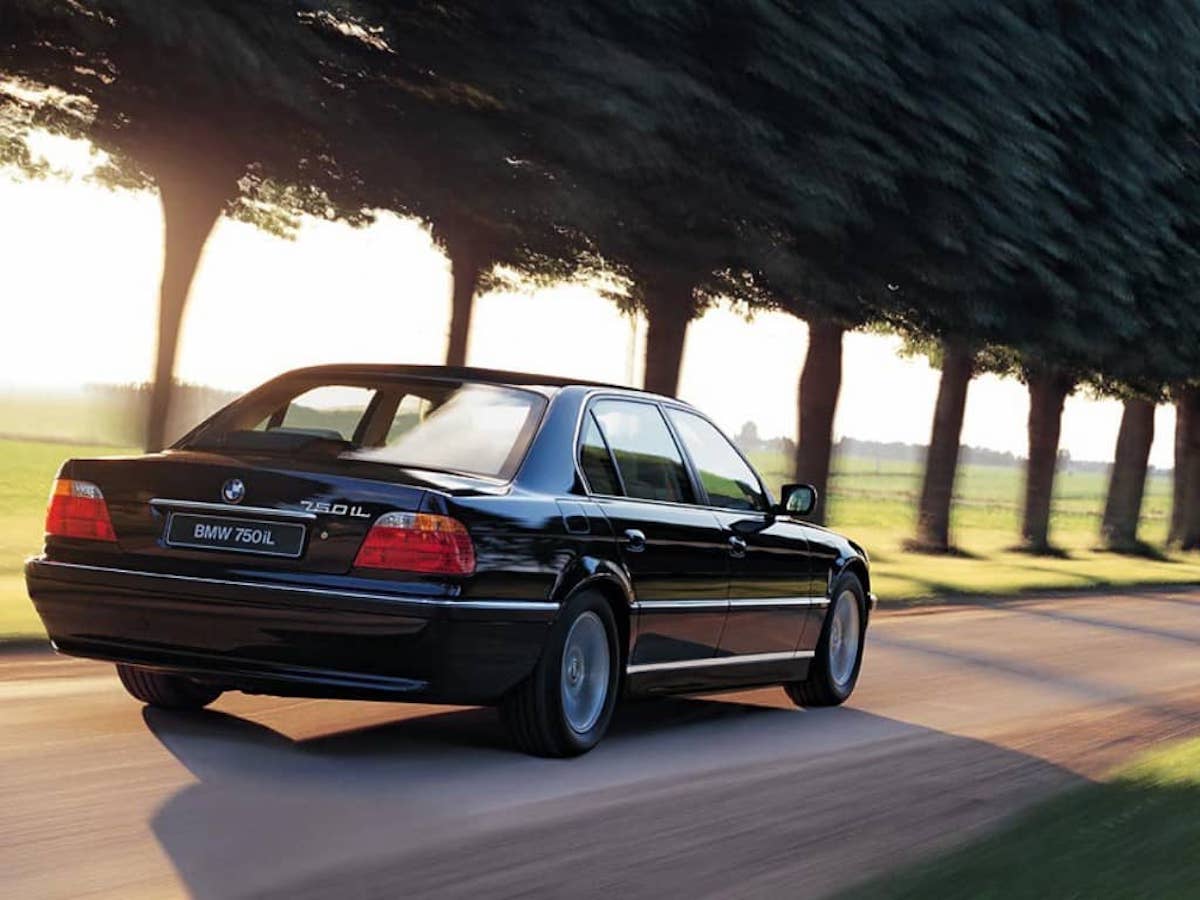 The short answer is because the E38 is an exquisite BMW and you should
© Favcars.com

Without wishing to get all misty eyed over stuff, you should buy an E38 7 Series because it’s from a different time. It’s a luxury car that isn’t in your face. It’s a machine you can properly engage with as a driver should you suddenly and unexpectedly find yourself overcome by the spirit of Roberto Ravaglia or Bruno Spengler. Despite going out of production over two decades ago, it’s a car we still talk about in 2022 mostly because of how utterly beautiful it still looks. E38s are still reasonably affordable, but prices are gradually creeping up for all of the reasons we’ve mentioned here. Get browsing before they reach silly money.

To browse through the listings of youngtimer BMW models such as the E38 on Dyler.com, click here!