The Most Expensive F1 Cars Ever Sold At Auction

After eight cancelled races and a four-month wait due to the COVID-19 pandemic, the 2020 Formula 1 season will finally get underway on July 3rd at the Red Bull Ring in Austria. With that in mind, we at Dyler.com have delved through our history books and compiled a list of some of the most expensive F1 cars ever sold at auction. 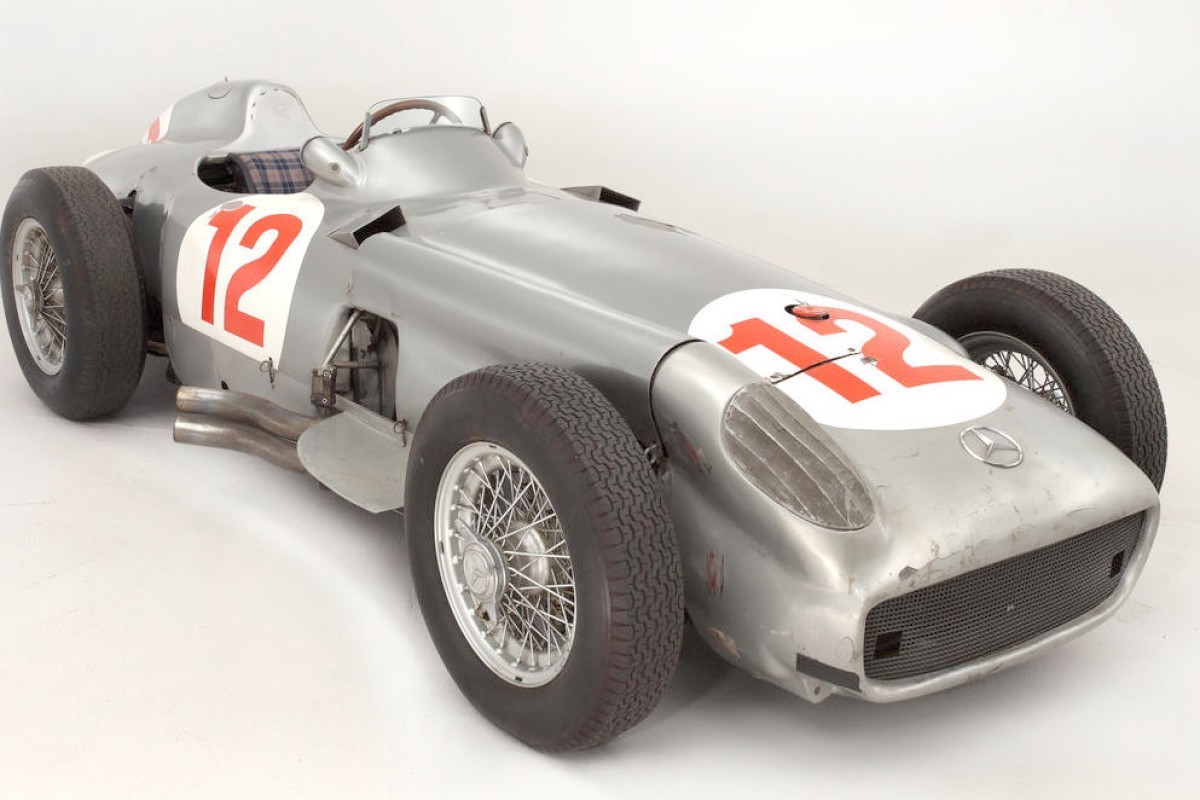 Driven by Juan Manuel Fangio and Sir Stirling Moss, the Mercedes-Benz W196 was the most expensive F1 car to ever be sold at auction
© New Atlas

Introduced for the 1954 Formula 1 season and also used the following year, the Mercedes-Benz W196 was driven by one of the greatest driver lineups in F1 history - Juan Manuel Fangio and Sir Stirling Moss. During the course of its life, the W196 won two drivers championships with Fangio, and from the 12 races it entered, it recorded nine wins, 17 podiums, eight pole positions and nine fastest laps. Described by Moss as a “driver’s car, but not an easy car to drive,” the W196 was powered by a modified version of the V12 engine used in the Messerschmitt BF109E fighter plane from World War II. It was also the last Mercedes F1 car to be made by Mercedes-Benz until it returned to the sport with Michael Schumacher and Nico Rosberg in 2010. A Fangio W196 sold at a 2018 Bonham’s auction for $29.7m thus making it not just the most expensive F1 car ever sold - it was also one of the most expensive cars to ever be auctioned. 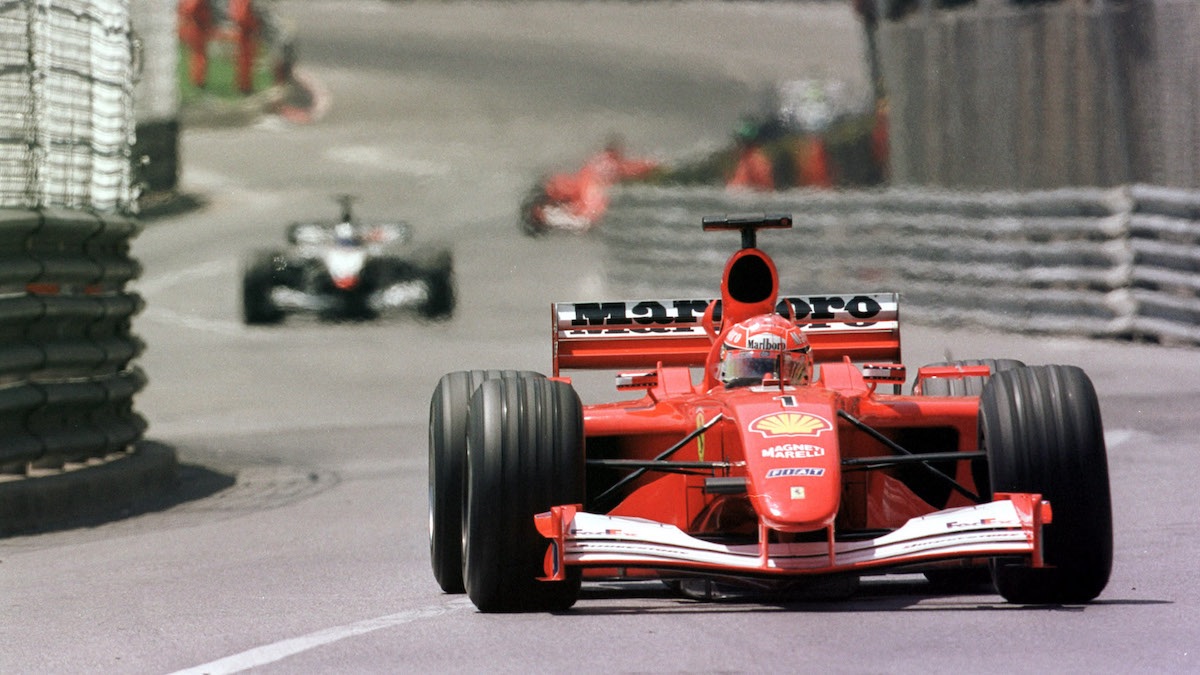 The Ferrari F2001 was the car that took Michael Schumacher to his second F1 championship in red and his third from seven world titles overall. The F2001 won 10 of the 20 races it entered with Schumacher, and he and teammate Rubens Barrichello managed to score 26 podiums, 13 pole positions and three fastest laps with this devastatingly quick machine. Had it not been for a number of reliability problems, Barrichello would have easily added to the car’s overall win rate. The F2001 was so effective, that Ferrari used it as an interim car for the first three races of the 2002 F1 season until it was replaced by the all-conquering F2002 which you can read about next. In 2017, Sotheby’s sold a Schumacher F2001 sold for $7.5m, which puts it second in the all-time list of F1 cars to be sold at auction. 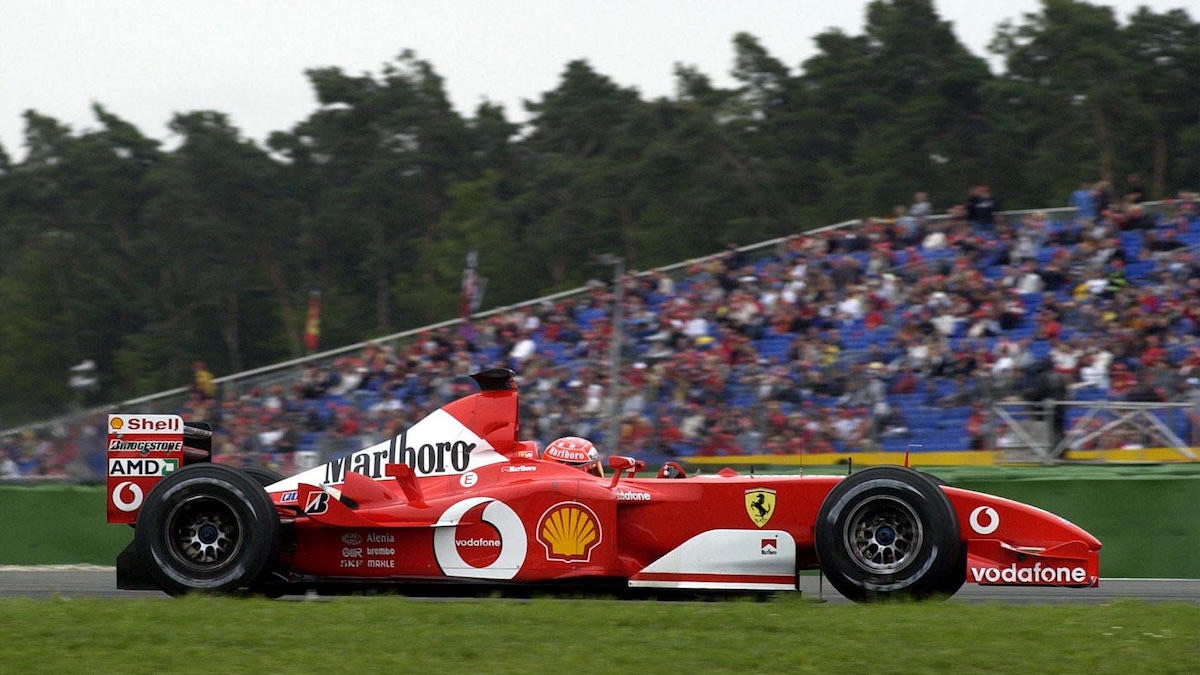 The Ferrari F2002 is considered to be one of the greatest F1 cars of all time. Designed by the technical powerhouse of Ross Brawn, Rory Byrne, Aldo Costa and Nikolas Tombazis, the F2002 took 15 wins from 19 races with Michael Schumacher and Rubens Barrichello at the wheel. The Ferrari F2002’s level of dominance saw Schumacher wrap up his Fangio-rivalling fifth F1 world championship at the French Grand Prix - the 11th round of a 17 race season. The F2002 was also used for the opening four races of the 2003 Formula 1 season and in a fitting tribute to such a dominant racing car, Schumacher took victory in its last outing - the 2003 San Marino Grand Prix. Its successor, the F2003 GA, was still a title winner in Schumacher’s hands, but it did not enjoy the same level of dominance as its predecessor and the German won his record-breaking sixth championship by a slim two points over then-McLaren Mercedes driver, Kimi Räikkönen. The very F2002 that Schumacher used to win his fifth world title was sold at Sotheby’s 2019 Abu Dhabi auction for $6.6m. 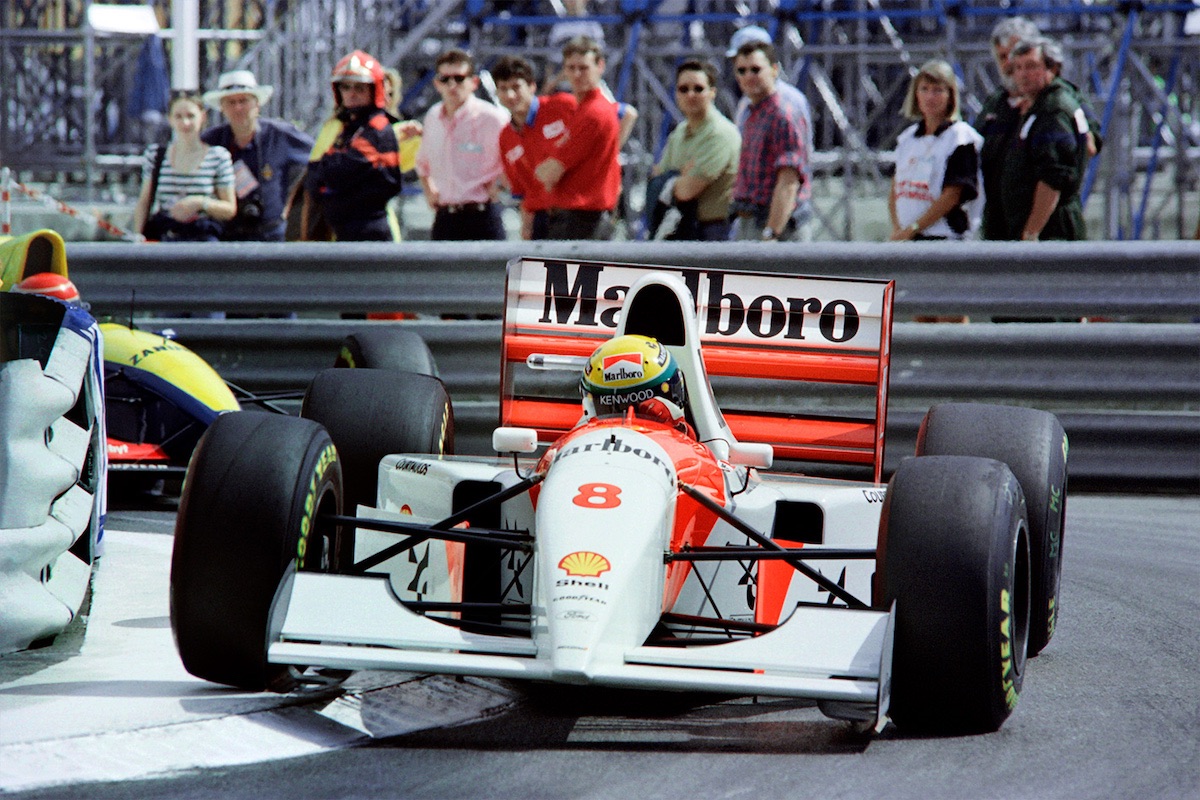 The McLaren Ford MP4/8 wasn’t a championship winner, but it treated the Formula 1 community to some of Ayrton Senna’s finest drives
© WhichCar

Following four championship-winning years with bespoke Honda engines, McLaren were left searching for an engine for the 1993 Formula 1 season after the Japanese manufacturer withdrew from the sport. After failing to secure the all-dominant Renault V10 engine that powered the then-title winning Williams cars, McLaren settled on a customer deal with Ford to power its MP4/8 for 1993. Despite the Ford 3.5-litre V8’s comparative lack of power in comparison to the Renault, the MP4/8 was one of the most technologically advanced cars of the season with new electronic engine management, chassis control, data acquisition and telemetry systems designed by the McLaren Group and TAG Systems. The team also had a certain three-time F1 champion, Ayrton Senna, at the wheel, who scored six wins with the MP4/8, including a sensational victory in the wet at Donington Park, and a record-breaking sixth win in Monaco. The car you’re looking at right now is the car the Brazilian used around the streets of the principality and despite missing out on the 1993 F1 championship to the Williams Renault of Alain Prost, this iconic McLaren still sold for over EUR 4m at the 2018 Bonhams Monaco auction. 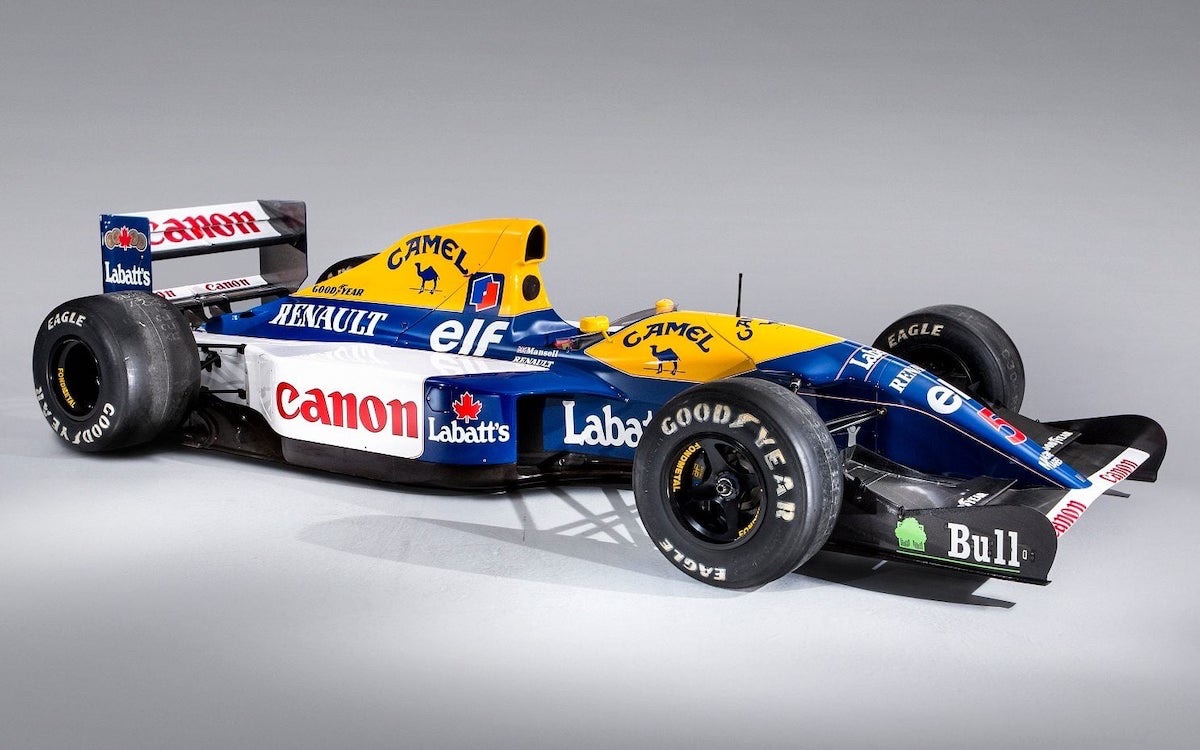 Packed full with cutting-edge technology, strong drivers, and a powerful Renault V10 engine, the FW14 and FW14B were two of the finest cars ever made by Williams
© The Telegraph

The Williams Renault FW14 and FW14B are considered to be two of the most technologically advanced Formula 1 cars of all time. Introduced for the 1991 F1 season, the Adrian Newey-designed FW14 was packed full of then-groundbreaking technology including semi-automatic transmission, active suspension, traction control, and ABS - all of which are banned from today’s F1 cars. The FW14 ultimately missed out on the 1991 championship to Ayrton Senna’s McLaren Honda due to a series of reliability issues, but the 1992 car - the FW14B - took Britain’s Nigel Mansell to a thoroughly dominant 1992 driver’s championship victory thanks to even more tech, and the potent Renault V10 engine. During its competitive life, the FW14 and FW14B took 17 wins from 32 races, 38 podiums, 21 pole positions and 19 fastest laps. Mansell’s “red five” title-winning car you see above sold at the 2019 Goodwood Festival of Speed auction for £3.7m. 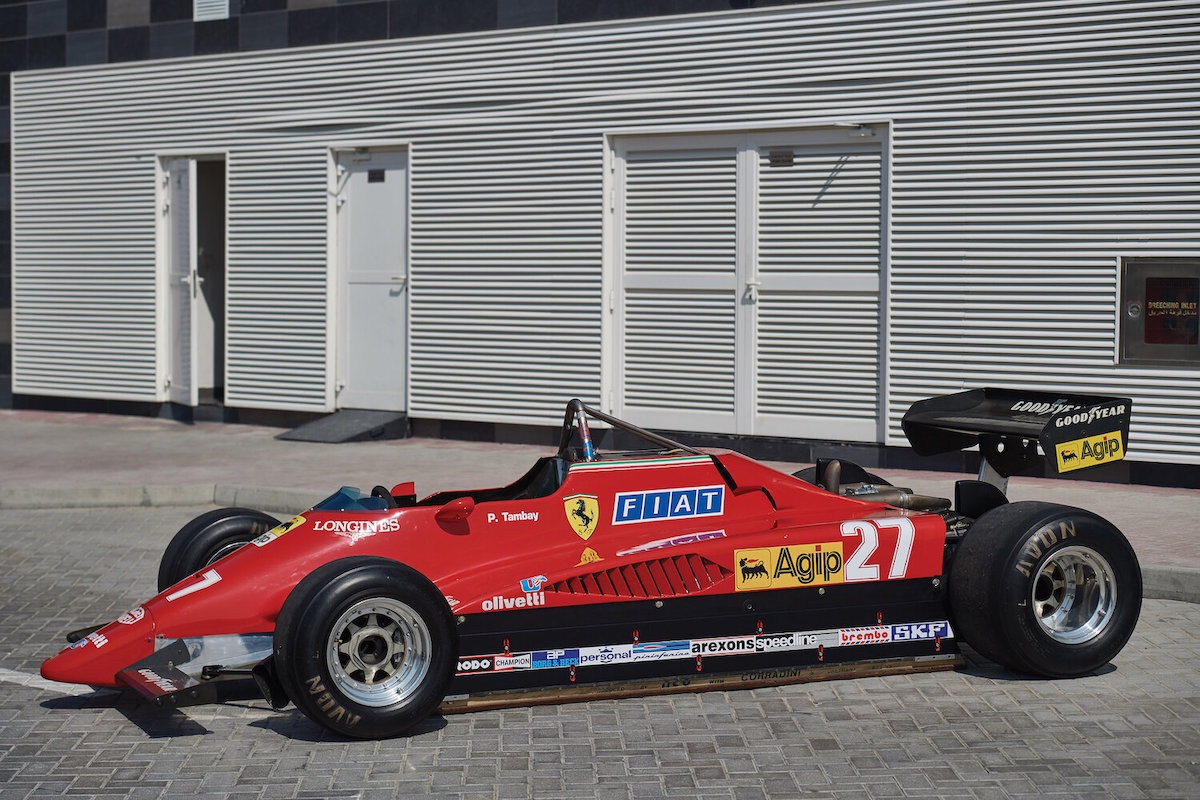 The Ferrari 126 C2 was a car that marked both triumph and tragedy for the Scuderia. In 1983, the car took Ferrari to their last constructor’s championship until Michael Schumacher brought the silverware back to Maranello in 2000. In terms of tragedy, it was also the car in which Gilles Villeneuve lost his life during a qualifying session at Zolder in 1982. Alongside Villeneuve, some of the most iconic names in Ferrari history also tasted success with the 126 C2, including Didier Pironi, Mario Andretti, Rene Arnoux, and Patrick Tambay. The car you see above was the last surviving 126 C2 chassis, and in 2019, it sold for just over $2m at Sotheby’s 2019 Abu Dhabi auction. 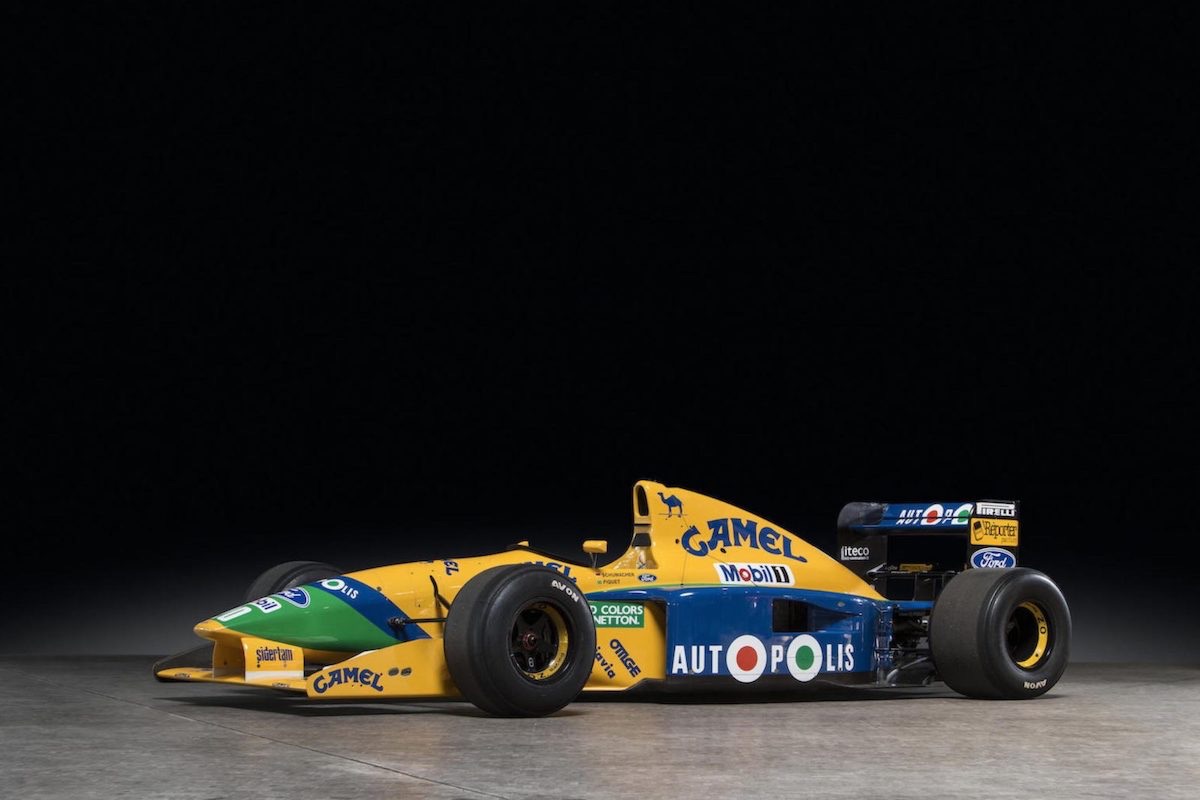 It might look unassuming, but the Benetton Ford B191 was driven by Michael Schumacher and Nelson Piquet - two Formula 1 drivers who managed to rack up a total of 10 drivers’ titles between them (seven to Schumacher, and three to Piquet). Ironically it was Piquet who scored the car’s sole victory in a hotly contested Canadian Grand Prix. However, it was also the car in which Schumacher scored his first F1 points and podium. These milestones make the B191 the foundation of the relationship between Schumacher and Benetton that saw the legendary German driver win the first two of his seven record-breaking F1 titles in 1994 and 1995. This B191 sold for just under EUR 950,000 at the Bonhams Spa Classic sale in 2017.

Follow this link to take a look around the full list of classic and sports cars available on Dyler.com.