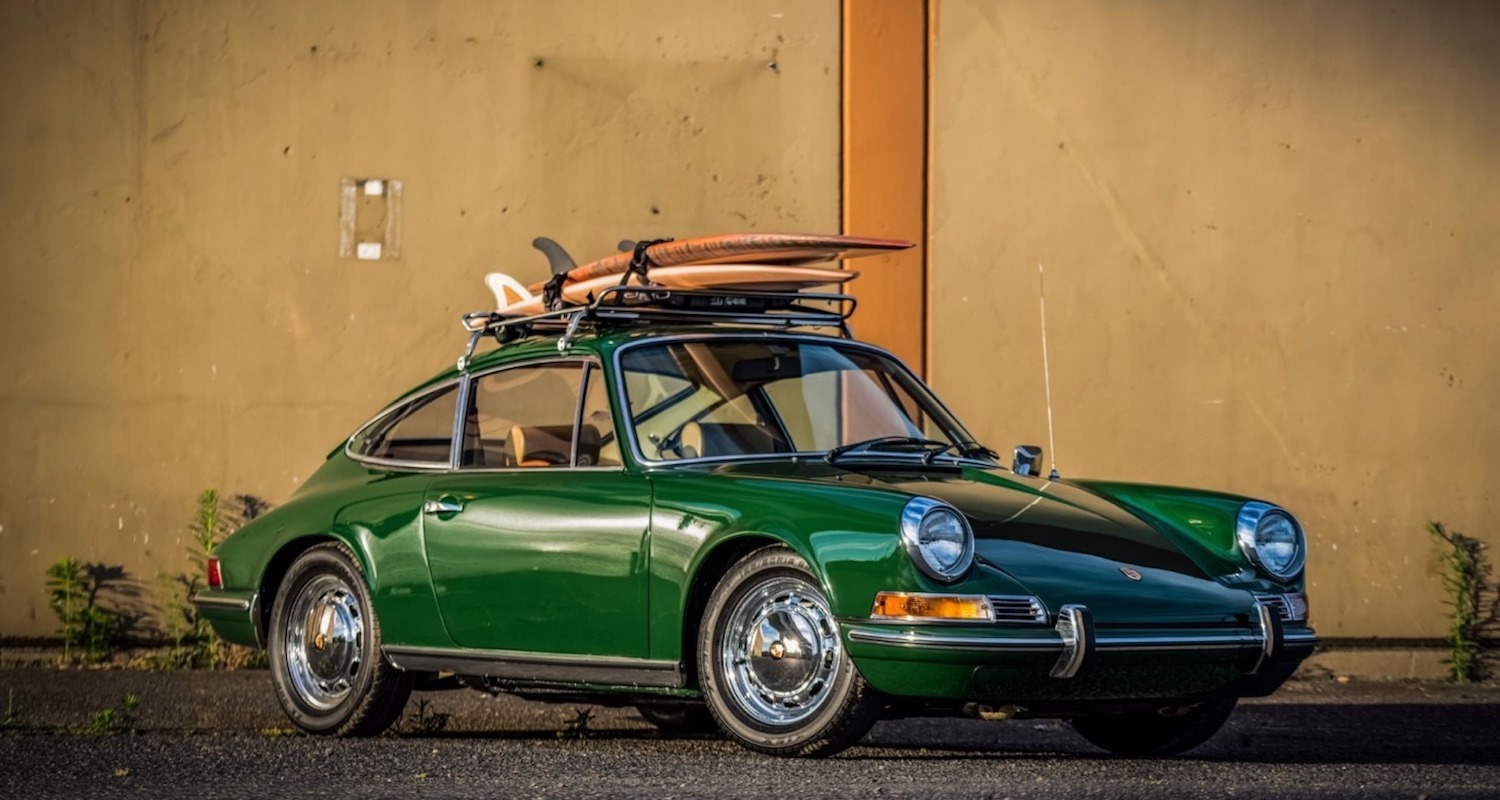 Since the Benz Patent-Motorwagen chugged its way out of Karl Benz’s garage in 1886, the classic car world has given us plenty of instantly-recognisable colour schemes.

Over the decades, Aston Martin has given us Silver Birch which is instantly associated with the DB5 in Goldfinger. Stateside, Chevrolet Hugger Orange is a colour that will put any late ‘60s Camaro amongst the echelons of “peak muscle car”.

Then, of course, there is Ferrari’s Rosso Corsa, which is possibly the most recognisable classic car colour ever.

A 2017 survey showed that all shades of red - or “resale red” in the classic car world - made up 25% of all classic cars sold. Meanwhile, green made up just six per cent of all transactions.

Yet in recent years, green has enjoyed somewhat of a resurgence amongst classic car aficionados. Don’t believe us? Open Instagram - there are loads of accounts celebrating a colour which was once considered “old-fashioned” or even “unlucky” amongst classic car owners.

To get to the bottom of the re-emergence of green within the classic car community, Dyler.com spoke to Elliot Newton, the founder and owner of the Green Over Tan Instagram account. 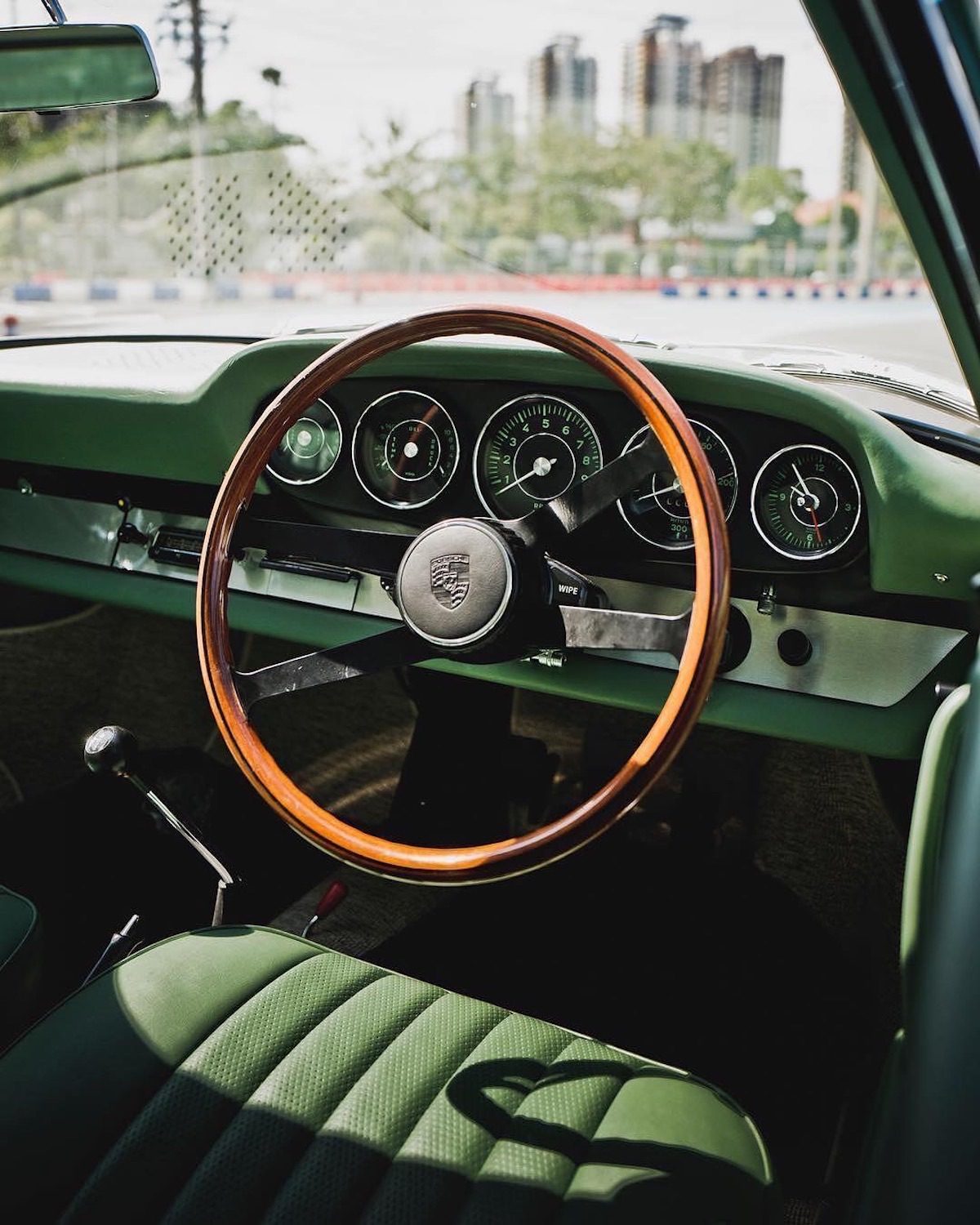 Since January 2019, the 26-year-old Brand and Product Manager has used his love for classic cars, art, design, architecture, and er… alpacas as a means of curating Green Over Tan in his spare time.

Follow the page, and you’ll be treated to a world of green over tan classic car-themed visuals that have been created personally by Elliot, or curated (and credited!) from other similar content creators.

In almost two years, Elliot’s aesthetically-driven exploration of the “Yin and Yang” that underpins the contrasting colour combination has earned the account a remarkable 40,000-plus fanbase from the classic car and design worlds.

In a socially-distanced online chat, Elliot gives his thoughts on the car that inspired Green Over Tan, and why it works as a colour combination.

He also reveals respect for “the brave” Ferrari buyer who shuns Rosso Corsa for Grigio Nurburgring or Tour De France Blue, as well as the future role of the social media influencer in automotive journalism.

Over to you, Elliot… 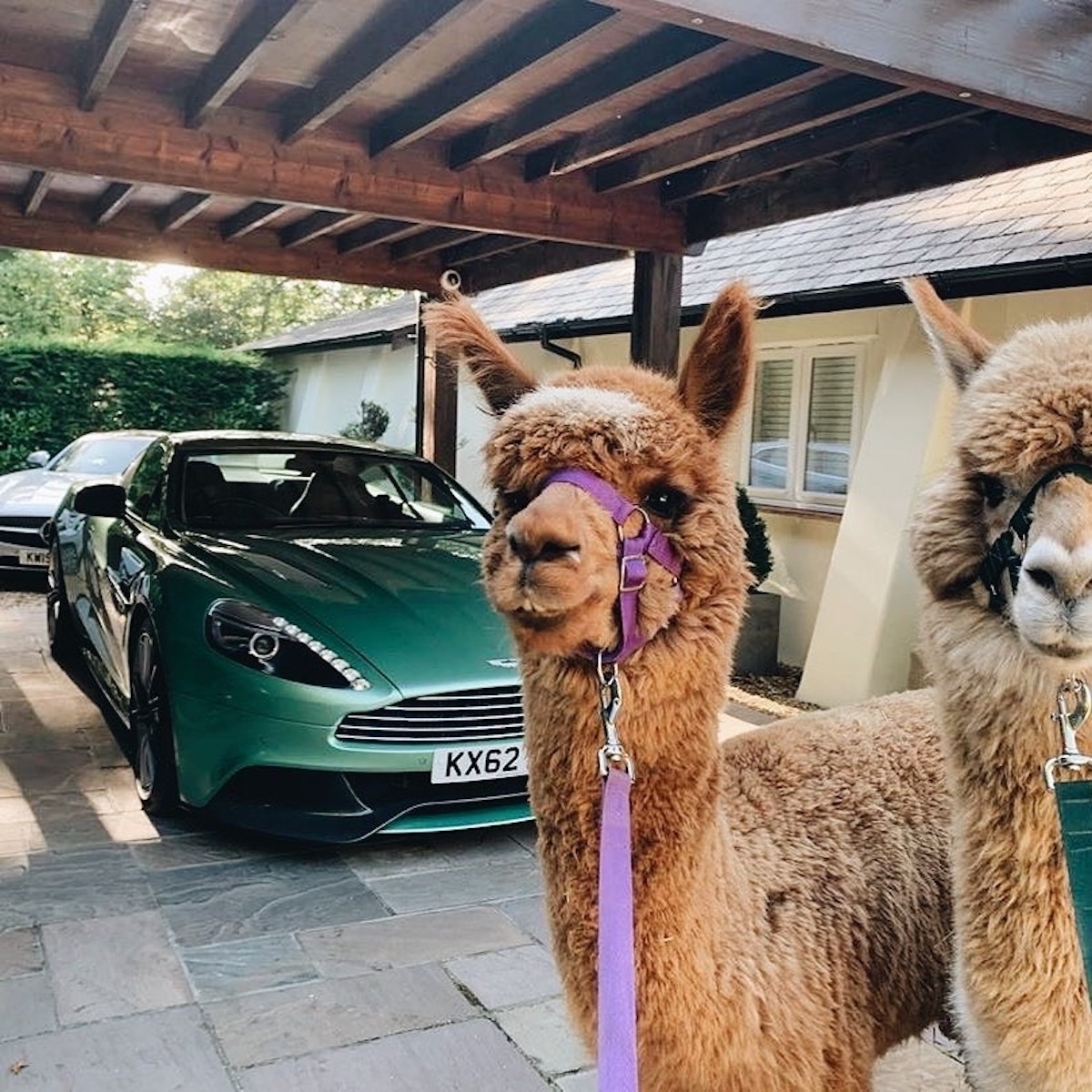 Alpacas and an Aston Martin Vanquish - the perfect green over tan image?
© bjccarsales

Dyler.com: Where did the idea for Green Over Tan come from? What was the car that inspired you to start this account?

Elliot Newton: The idea initially came from a limited edition Aston Martin Vanquish Zagato Shooting Brake. I was lucky enough to work at a Aston Martin main dealer in a previous job, so I spent a lot of time working with supercars. Whilst there, I saw many buyers spending hours choosing every single intricate detail of their next DBS or Vantage.

One particular buyer purchased one of these 99, special edition Zagatos. They specced it in a Buckinghamshire Green over Oxford Tan combination, and I will never forget the day it arrived fresh from the factory - the rich smell of leather, the polished gold switchgear and that glorious V12 cold start sound, made it feel like it was from another century. On the other hand, though, it but so timeless in its design...

I photographed the car alongside another three shooting brakes, and that was a real ‘pinch me’ moment. Out of all of them, though, the green over tan example had me hooked and I was very eager to find how else this colour combination can work not just for cars, but also with my other interests such as interior design and fashion. I’ve since been pleasantly surprised! 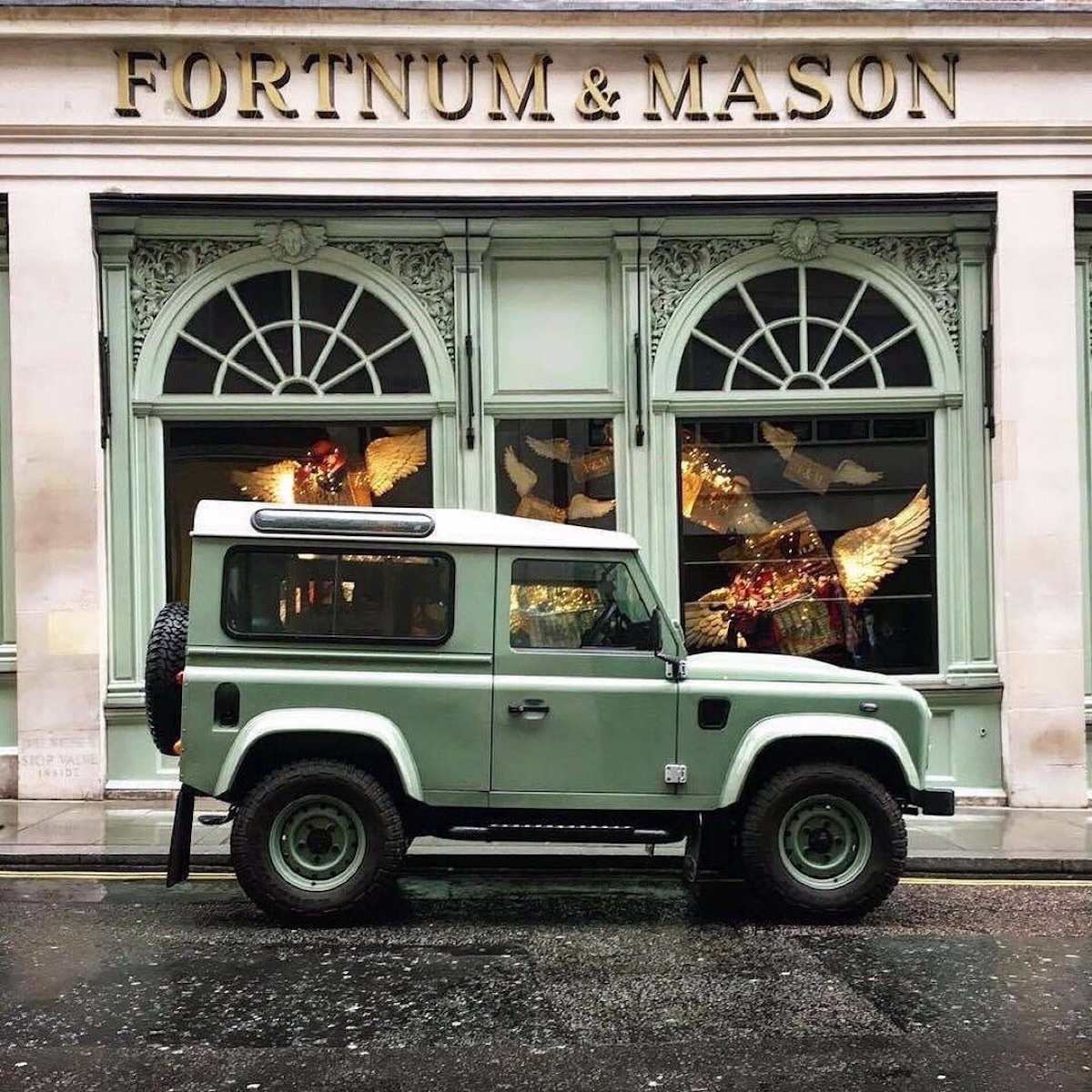 A green Land Rover Defender Heritage Edition parked outside a tan Fortnum and Mason - can you think of a more “old money car” colour combination?
© grasmeregirl

Dyler.com: You started Green Over Tan in January 2019. Since then, you've grown the page to 42.3k followers. Did you expect this?

EN: I’ll be honest, I never ever expected Green Over Tan to grow in the way that it has because I started the page as a bit of a creative outlet for myself. Working in social media for the automotive industry I spend hours on my phone working with clients, and creating content for cars that cater to all budgets and lifestyles.

I needed a bit of an escape, so curating similar colour palettes and finding new photographers relaxed me. I didn’t think that many people would be interested in the colour combination, but green was , and thankfully still is, a hugely on-trend colour, meaning the areas for content are so broad.

I never wanted Green Over Tan to be just another car reposting account, I wanted to incorporate fashion, art, interiors, and food into it. Genuinely, the more random the photo, the more intrigued by it I am. I felt this peaked a few months back when I saw an image of two tan alpacas standing in front of an Appletree green Aston Martin Vanquish - it was just glorious!

I owe the success of the page to every single person who’s commented, followed and submitted content. It’s incredibly clichéd, but without any support, the page would be nothing. I’m lucky enough to speak to followers from all over the world who have spotted or purchased a green over tan car. That’s the stuff I love! 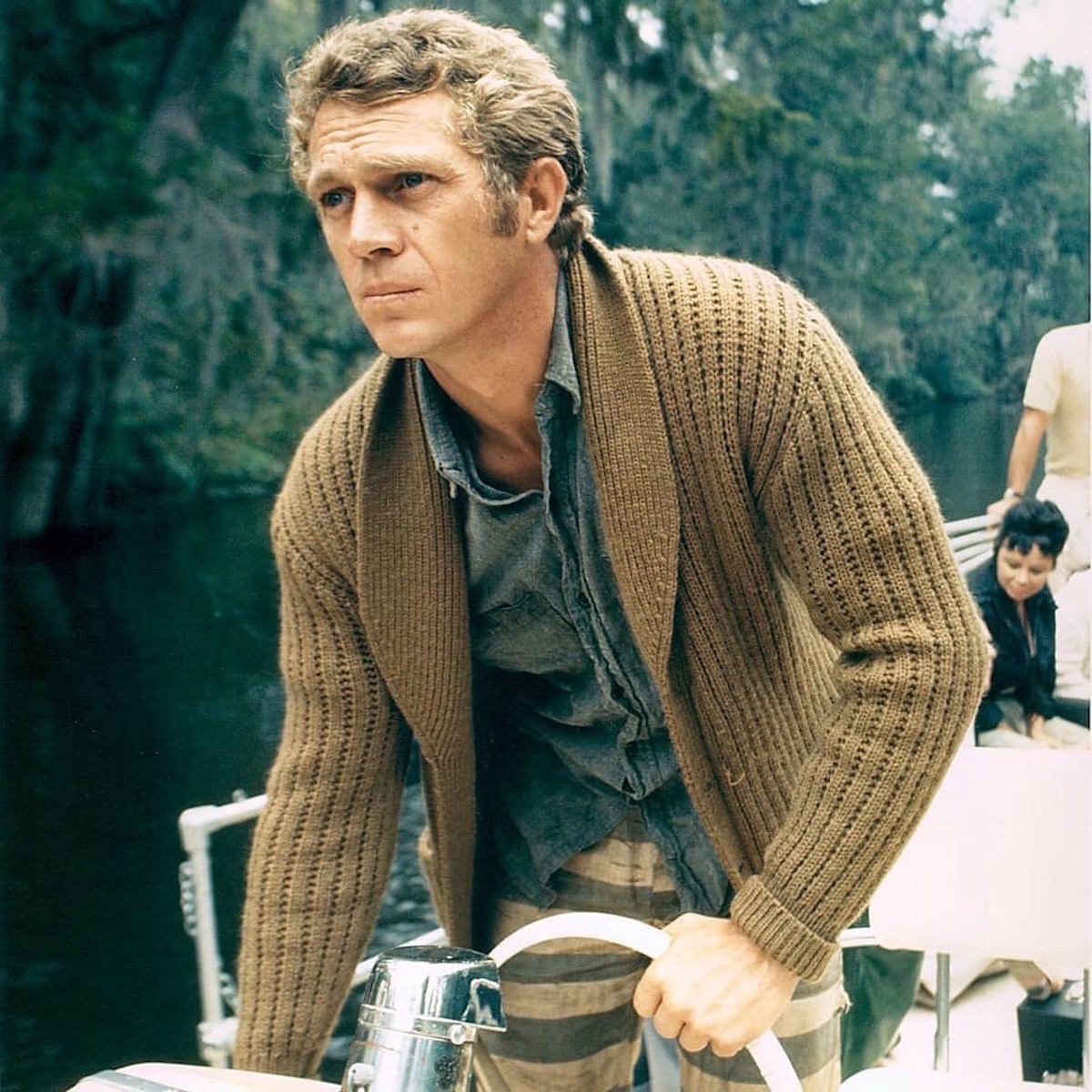 If green over tan is good enough for Steve McQueen, well…
© unknown

Dyler.com: What do you think makes green over tan such an iconic colour combination? How and why does it work so well?

EN: For me, green over tan has a certain Yin & Yan to it. The green, often a darker, neutral tone works on almost every single car. Interestingly though, it’s a colour that was once seen - particularly here in the U.K. - as ‘unlucky’ and extremely undesirable a few years back. In recent years though, it’s regained its popularity and it’s bang on trend right now. Combine that with a rich vibrant tan leather or cloth and you’ve got yourself a winning combination.

I feel they both work well regardless of the shade. I see that brighter tones similar to Porsche’s Aurantium Green blended with a rich beige palette work just as well as a classic British Racing Green over Chestnut Tan. The possibilities really are endless and that’s what makes it so special.

Car enthusiasts always seem to push the boundaries and where many would initially think the combination would be too bright or too green or have too much tan, it all seems to come together to create greatness. 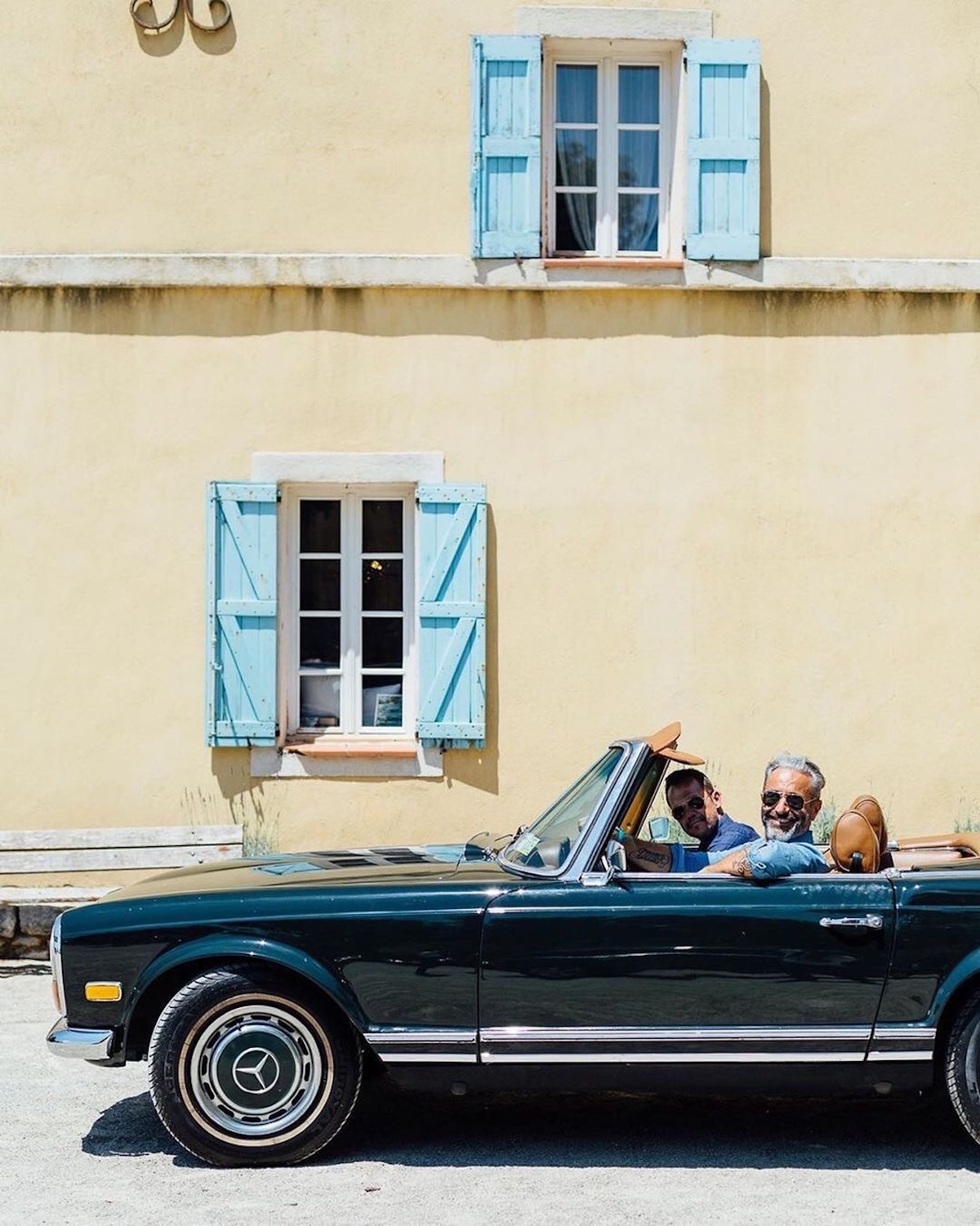 EN: Yes and no. As I mentioned, this combination probably hasn’t been the most desirable in previous decades. You had to be a pretty brave person to head to a Ferrari showroom back in 1994 and spend over £100,000 on a Verde British 355 Spider with a tan interior. Thankfully, though, there were a handful of brave people back then!

Ferraris, in particular, will always hold their value when finished in Rosso Corsa. It’s the colour that millions around the world associate with them. This leaves a brave few people who steer away from red to show how good a Ferrari can look in other colours too - I’m a huge fan of Grigio Nurburgring grey and Tour de France blue on Ferraris in particular... 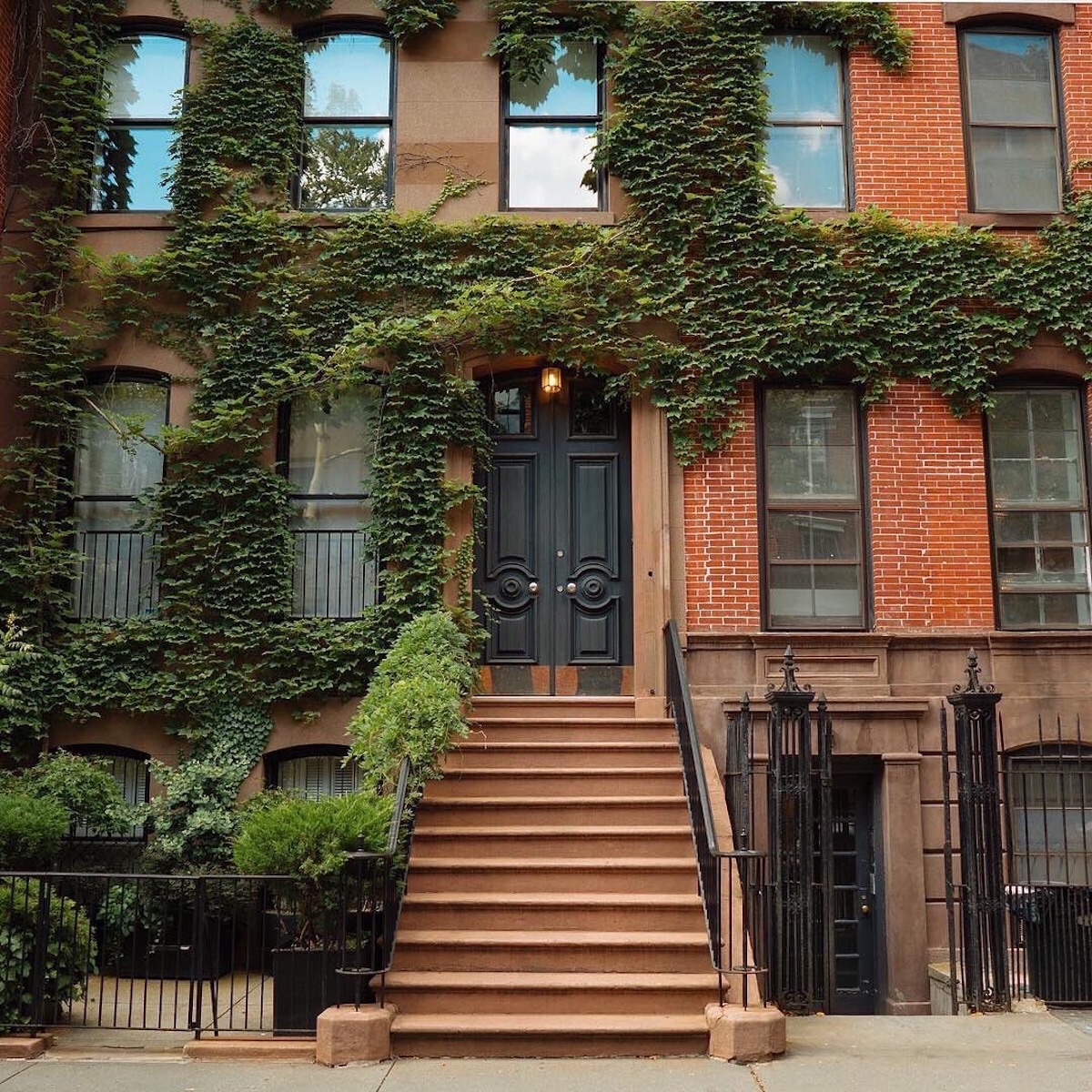 Dyler.com: What are your plans for the page - do you aim to turn it into a magazine, a lifestyle website devoted to automotive culture and style, or something similar?

EN: I never wanted Green Over Tan to be just an Instagram profile. Now that its following has grown and is showing no sign of slowing down, I’m very eager to take it to the next step.

I’ve been working on a website to feature longer articles and detailed stories, as well as high quality branded clothing and accessories. I can’t give too much away, but I promise you it’ll be worth the wait!

Working full-time means that my timeframes on a lot of projects and ideas are a little slower than I’d like. That said, the last thing I’d ever want to do is push out products that don’t fully complement the quality of the page.

I took a big step by introducing myself into the page and putting a face behind the profile. I feel that this has added far more personality to the page, and conversations flow so much easier on the posts and inboxes.

Now I have my very own Willow Green over kind-of-tan beige Mercedes 190E Carat Duchatelet. That’s something super humbling, because it means a lot to have a car that represents what I’m so passionate about. 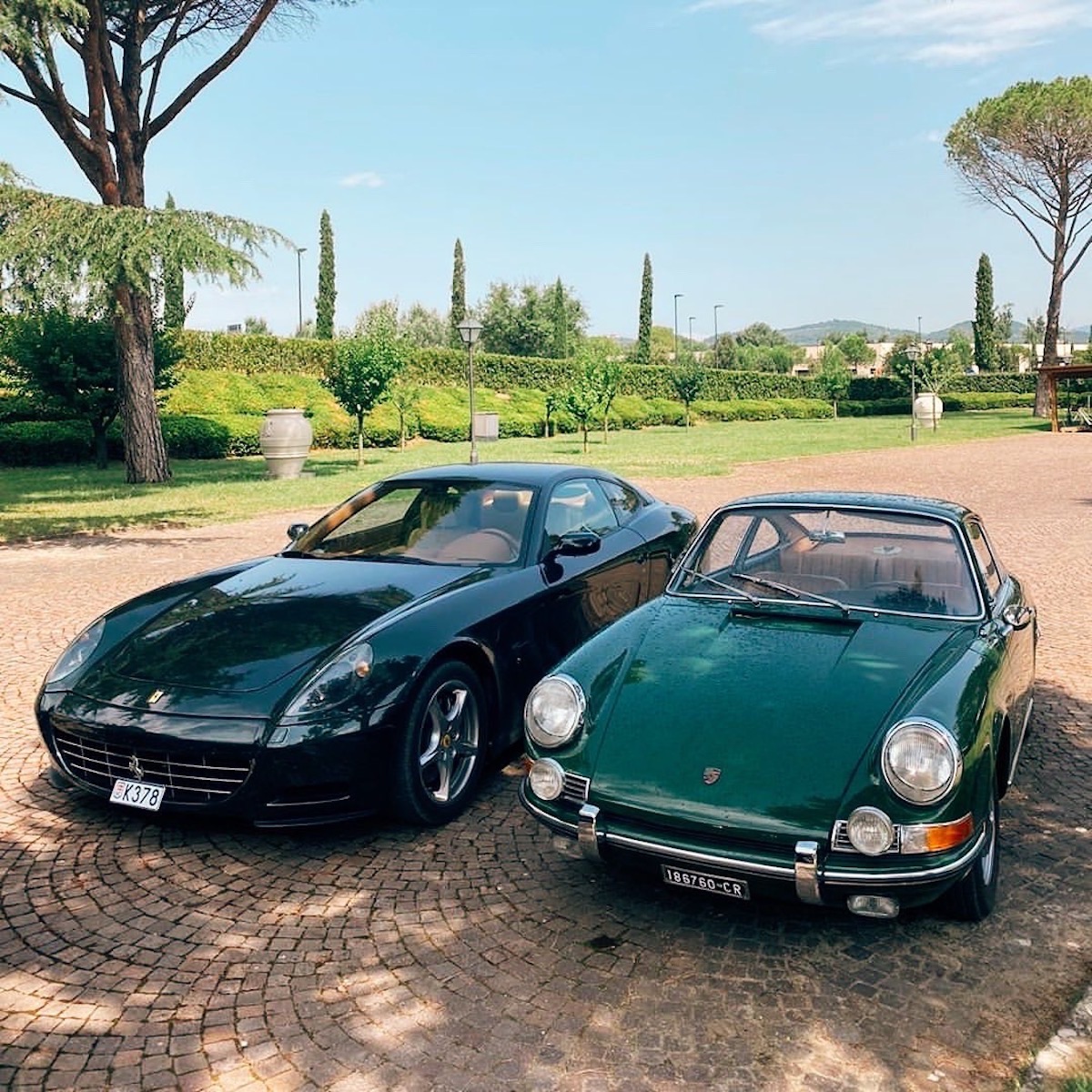 Dyler.com: What role will 'Car Instagram' influencers such as yourself play in automotive journalism? Do you see written content being fully replaced with visual?

EN: I am still super shocked to see car brands that release new vehicles in the green over tan colour combination. Whether it’s coincidence or targeting, is still awesome to see either way.

It’s also clear to see that car makers heavily monitor trends through Instagram and other social media platforms, as it’s a perfect way for them to understand what potential customers are looking for in their next car.

Working in digital marketing I’ve seen how quickly trends come and go - one month a social platform can be the most popular thing ever, then it’s empty the next. I’m confident in saying that print is truly making a comeback. I genuinely believe that car enthusiasts will always want to flick through a hardback book or glossy magazine, rather than scrolling through their phone with glazed eyes.

Despite social media making the discovery of content so much easier, maintaining brand loyalty and engagement can be extended into physical items which have a far longer-lasting impression.

I’m honoured to now be classed as an ‘influencer’! Whilst some cringe at the term - and trust me there are plenty of cringy ones out there! - it’s nice to be in a position of influence. That said, it comes with quite a bit of responsibility. Providing subscribers with the right information in the right tone of voice goes an awfully long way!

We would like to thank Elliot for creating one of the most aesthetic “Car Instagram” pages out there. It’s certainly one we love. Click here to subscribe to Green Over Tan or our Newsletter!

Join us next week for Part 2 in which Elliot reveals five of his favourite Green Over Tan classic cars!

If you are interested in having your very own green over tan classic car, head to Dyler.com, and select ‘green’ from the colour option in our advanced search function.