Some cars have gone down in history for legendary wins, for the innovations they introduced or for the drivers who piloted them to glory. Others, meanwhile, have become veritable icons for what they represented: a unique story; a turning point in history; a social phenomenon; an event that rippled beyond the stands of the race track to ultimately define an era.

One such case was the Maserati “Eldorado”, which became famous in 1958 as the first single-seater car in Europe to be sponsored by a brand not linked to the world of motorsport. The brand in question was Eldorado, an ice-cream manufacturer.

This was the first example of modern sponsorship, where the car was painted in the colours of the partner company, abandoning the traditional colour assigned to each country by the International Federation. This was a real revolution for the day, of vital importance to the future of motorsport, which from that moment on opened its doors to new financial backers. 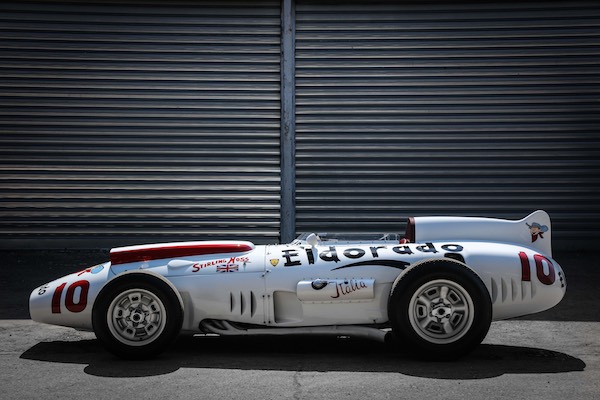 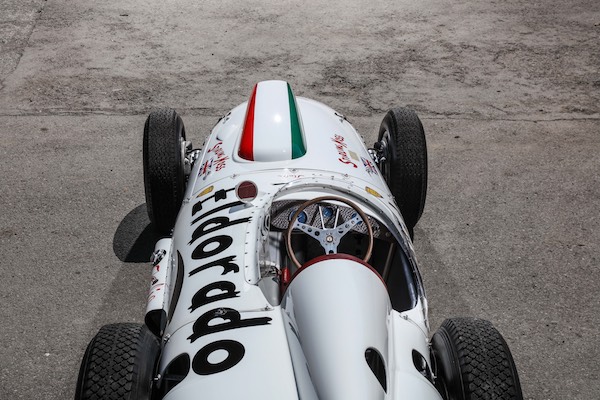 Maserati was commissioned to build the car by Gino Zanetti, owner of the Eldorado ice-cream company. Determined to promote his brand on the international stage, Zanetti turned to the House of the Trident to create a single-seater car to compete in the “Trofeo dei due Mondi” (Race of Two Worlds) at Monza: the Automobile Club d'Italia had organised a 500 Mile race at the circuit based on the Indianapolis 500, with top American drivers lining up alongside Europe’s cream of the crop. 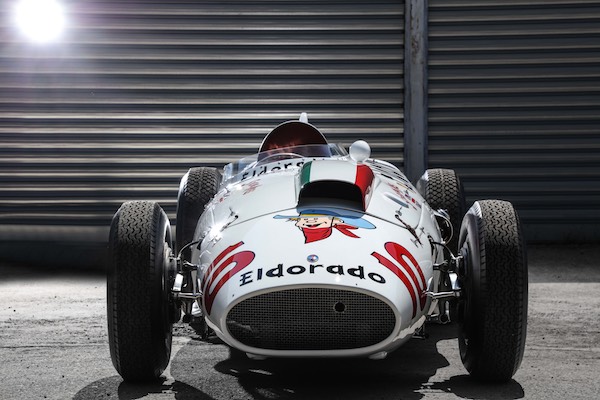 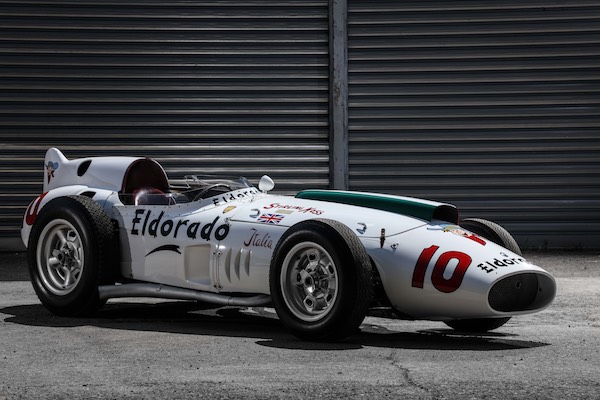 The Maserati 420/M/58, chassis number 4203, was thus finished with a cream coloured livery, instead of Italian racing red. The name Eldorado was emblazoned in bold black lettering along the sides of the car, with two additional smaller logos on the nose and below the small deflector that acted as a windshield.

The logo with the face of the smiling cowboy was positioned in the centre of the nose and on the sides of the rear fin. Below the two Eldorado brands on the sides, in bright racing red was “Italia”, denoting the nationality of the sponsor as well as that of the racing car manufacturer. 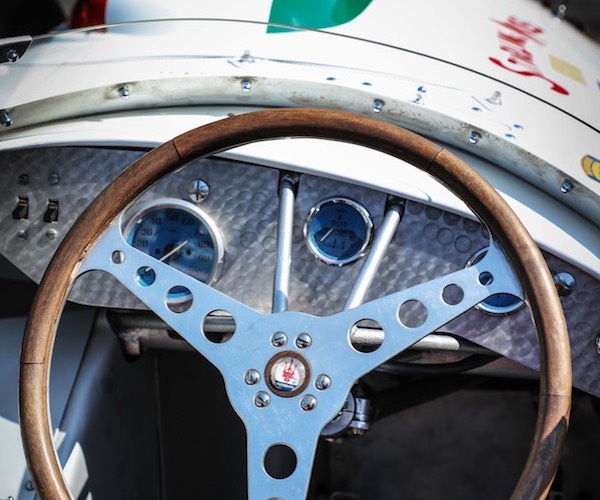 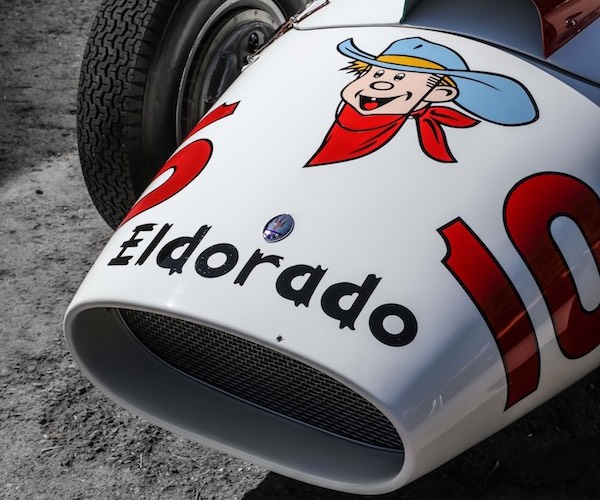 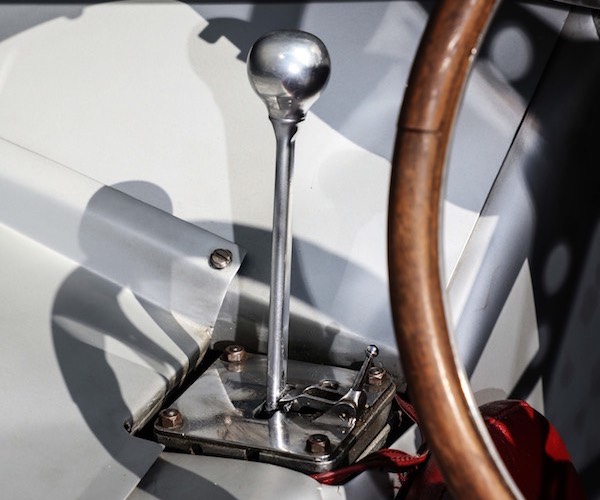 The long silhouette of the “Eldorado” also bore the name of the driver chosen to race it in the “Monzanapolis”: Stirling Moss, one of the greatest drivers in the history of motor sports, and a former Maserati driver.

The previous year, in 1957, the Modena-based manufacturer had won the Formula 1 World Championship with Juan Manuel Fangio, before deciding to withdraw from competitive racing and build racing cars on commission only for private customers, also providing them with assistance. This was precisely the ideal situation that Zanetti was seeking, and the reason why the Italian entrepreneur turned to Maserati.

In the space of a few months, the engineer Giulio Alfieri created the “Eldorado”. The engine, derived from the V8 unit mounted in the 450S twin cam models, had its displacement reduced to 4,190 cc, generating 410 hp at 8,000 rpm; both the engine and transmission were offset to the left by nine centimetres. The aim of this decision was to ensure a more balanced weight distribution, taking into account the anti-clockwise direction of travel on the high banked corners at Monza. 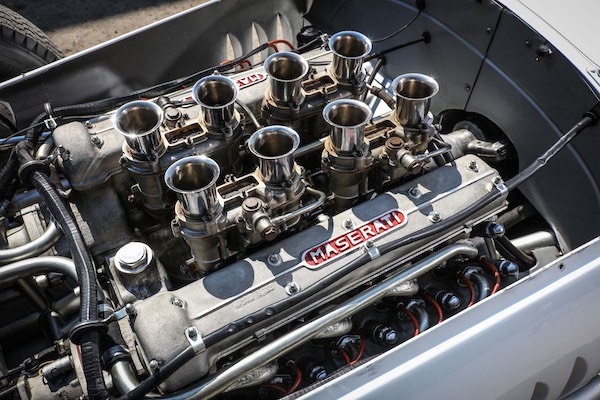 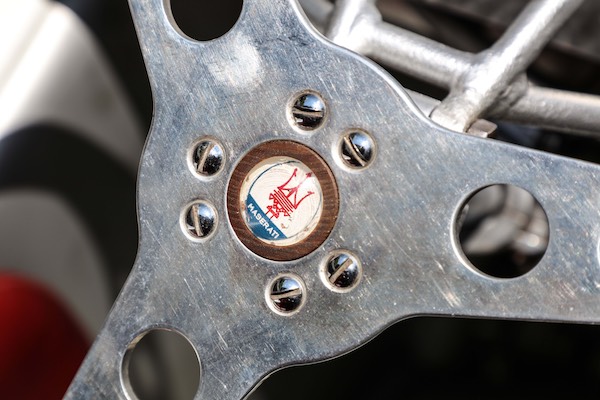 The gearbox had just two speeds while the De Dion rear axle had no differential. The tubular chassis was derived from that of the highly successful 250F, although it proved oversized compared to the latter, also as a result of numerous reinforcements introduced to enable the car to withstand the mechanical stress generated by the concrete track at Monza.

To reduce the weight, Halibrand magnesium wheels were used along with Firestone 18-inch braided tread tyres inflated with helium. With these measures, the car weighed in at 758 kg. The aluminium bodywork, hand crafted by Fantuzzi, was characterised by an aerodynamic vertical fin behind the cockpit and a front carburetor scoop. 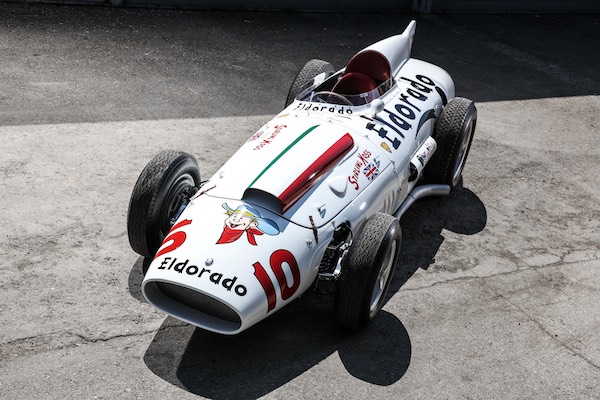 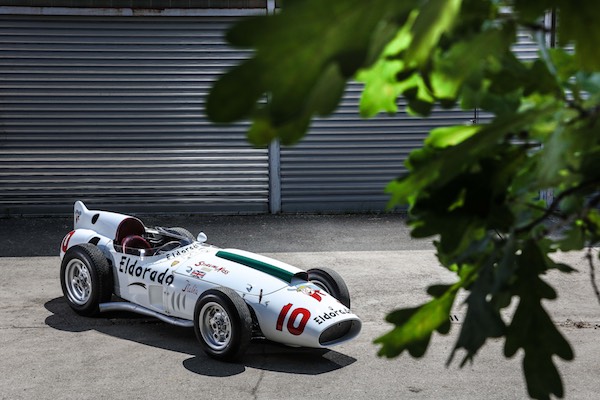 On 29th June 1958, at the Monza track, the race was held in three heats to decide the final points table. This strategy was aimed at enticing European car manufacturers to enter their own cars, which had not originally been designed to compete in such a long race, and one that was so mechanically arduous.

In the first heat Moss finished 4th. In the second he crossed the line 5th. In the final heat, however, his steering broke and the Maserati slammed into the guard-rail, dashing the English driver’s hopes of finishing the race in third place overall. Taking into account the three heats and the total number of laps completed, Moss nonetheless took seventh place in the end. He walked away unscathed from the crash and, all things considered, the “Eldorado” too suffered only limited damage, proving the value of its solid structure.

Despite the success in terms of spectator numbers and entertainment value, the 500 Miles of Monza did not become a regular event on the racing calendar. Based on the findings from the race, the “Eldorado” was modified by the Gentilini bodywork shop, which removed the rear fin and reduced the hood scoop, after which the car was entered in the Indianapolis 500 in 1959. 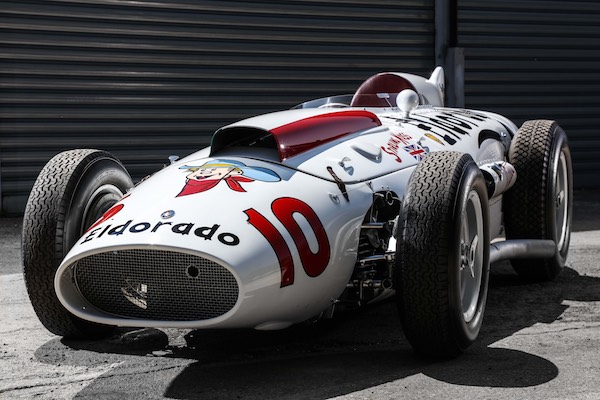 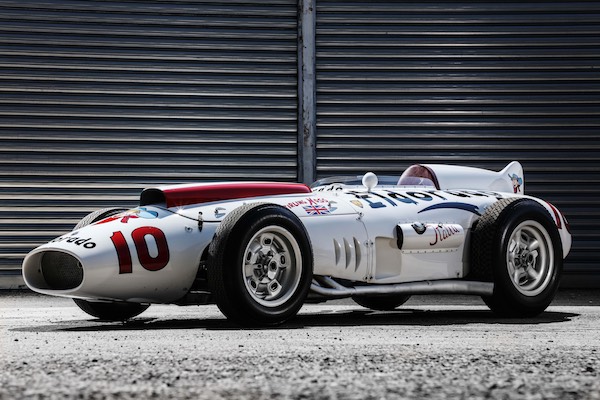 This time it was finished in red, the colour denoting Italy in competitions, but still emblazoned with the Eldorado sponsor’s name in white lettering on the sides, as well as the cowboy logo in a white circle on the nose and tail. The inexperience of the gentleman-driver, Ralph Liguori, meant that the car failed to qualify, as it set the 36th fastest time, with only the first 33 qualifying. With a professional driver behind the wheel, it would have been a very different result. But that is a whole other story. 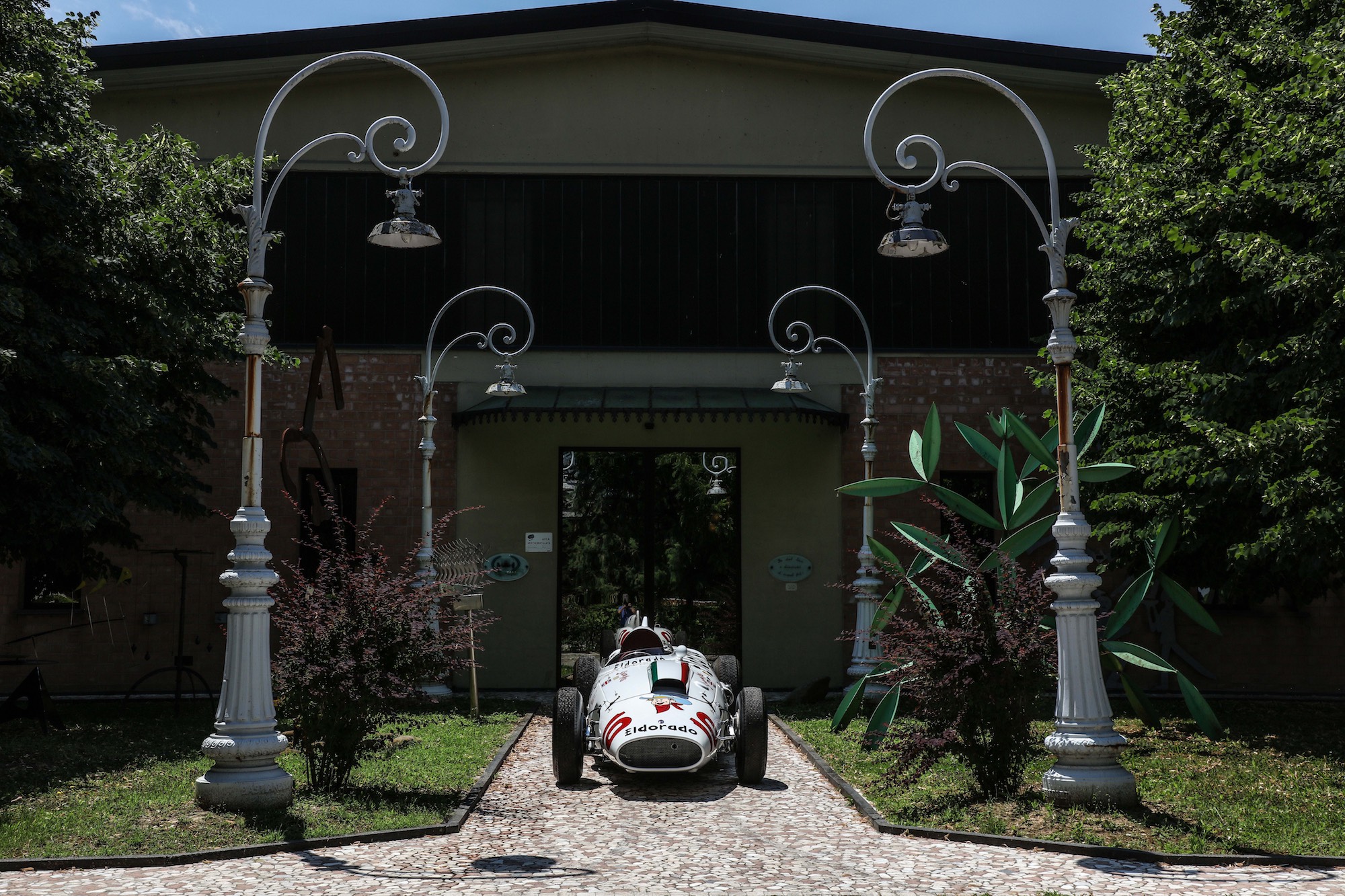 Maserati “Eldorado” is part of the Panini Collection, housed in Modena.
©Maserati

The Indy 500 race was dear to Maserati, which took victory in 1939 and 1940 with the driver Wilbur Shaw behind the wheel of an 8CTF. Shaw almost made it a hat-trick in 1941 but was forced to withdraw during the penultimate lap while out in front, with victory denied to him by a broken wheel.

Maserati is the only Italian car manufacturer to have won on the Indiana race track and the only European brand to have triumphed on two consecutive occasions.

The Maserati “Eldorado”, perfectly restored in its original white livery, is part of the Panini Collection, housed in Modena.