Jim Glickenhaus: “I Think That We Are What Ferrari Once Was”

It’s impossible to dislike or not respect Jim Glickenhaus. A commanding figure in his trademark stetson hat, the softly-spoken 71 year-old New Yorker is a cult hero on the automotive and motorsport scenes.

He isn’t the traditional ‘boss’ of a car company. Sure, it’s Jim’s name above the door at the Scuderia Cameron Glickenhaus, the boutique performance race and road cars he founded. Yet unlike most car company CEOs, Glickenhaus didn’t get there through family networks. His journey to the pinnacle of the automotive world - culminating with fielding his own team at Le Mans this year - has been anything but ordinary. 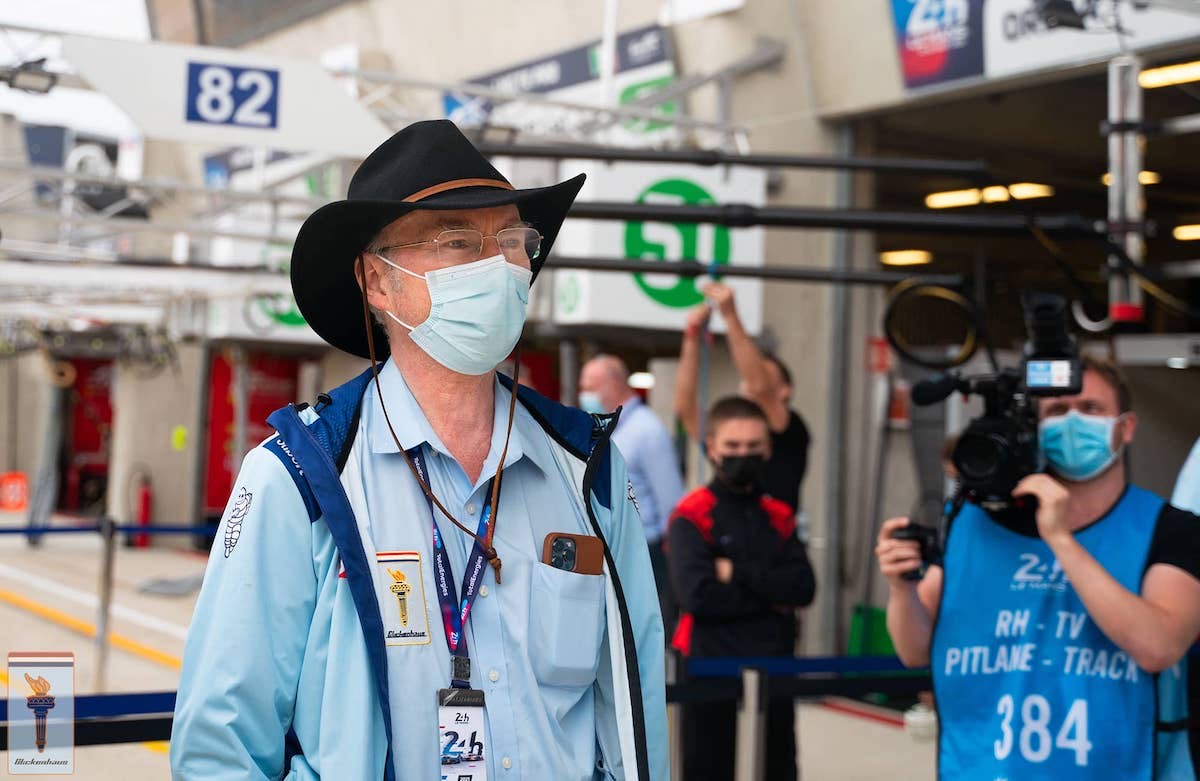 Jim Glickenhaus - keeping it COVID safe in the paddock, and real on the race track
© Studiozero.eu

Make no mistake, Jim is a wealthy guy. Born to legendary US investor Seth Glickenhaus, he spent decades as an independent filmmaker prior to switching to finance - a decision he says “helped my father to continue.”

Eventually, he moved over to the automotive world as an independent carmaker, which is probably what you know him best for if you’re reading this.

Arguably, Jim’s best-known movie is The Exterminator, and he explains that a large chunk of the money he made from the 1980 cult classic helped him lay the foundations for his enviable car collection and his SCG car company.

Jim Glickenhaus on How the Ferrari Collection and Filmmaking

“I made a bit of money from The Exterminator, so I did what any young kid would do,” he tells Dyler, just a few days after returning to the United States from Le Mans. “I took half the money I made from that film and invested it; the other half I spent on a used Ferrari.”

To say that Jim is a Ferrari fan is an understatement. His well-documented car collection consists of plenty from the stable of Maranello, and to list but several in Jim’s garage, there is a one-off 1970 Ferrari 512 S Modulo concept car, and the Le Mans-competing 412 P from 1967.

He also owns a Ferrari GTB Turbo he purchased from former Ferrari driver Nino Vaccarella, who won Le Mans in 1964 and 1965 with the Scuderia’s 275 P and 365 P2. 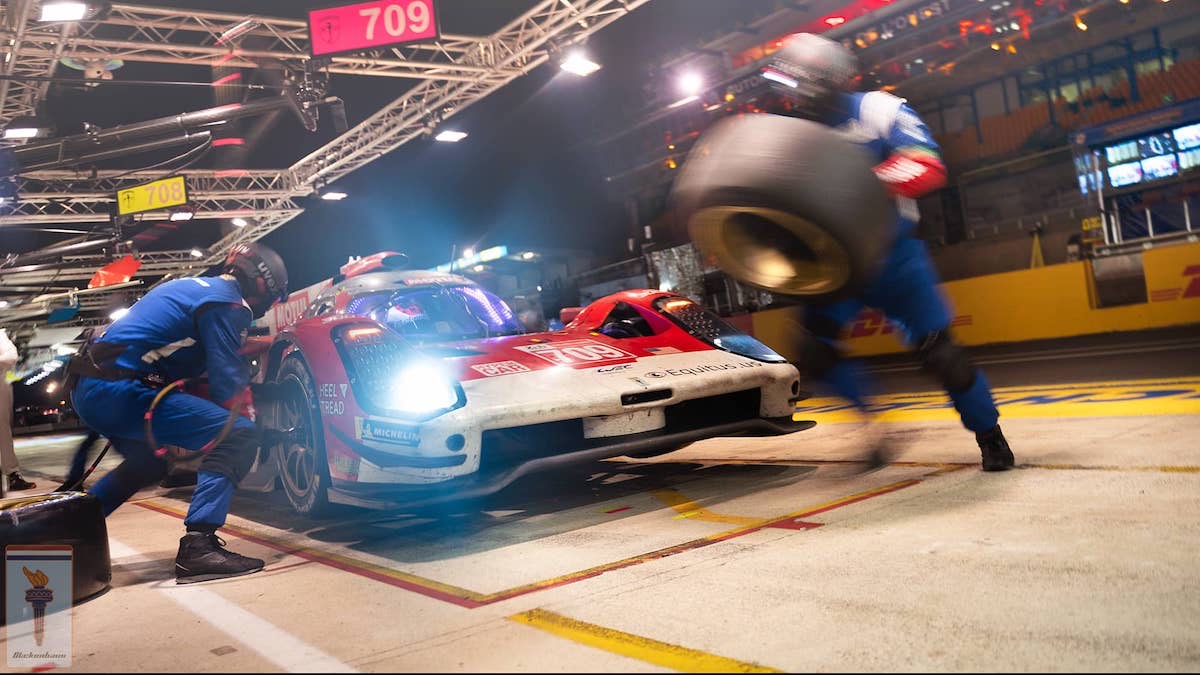 Since its Le Mans adventure began its road to Le Mans at the start 2021, Glickenhaus Racing has received almost 27,000,000 social media interactions from its legions of fans around the world
© Studiozero.eu

His roster of Ferraris is so impressive that names such as Luca di Montezemolo, Nino Vaccarella, and the now-departed Luigi Chinetti - characters so intrinsically-linked with the brand - all see or saw Jim as a personal friend. To show how deep his connection with Maranello runs, Ferrari and styling house Pininfarina commissioned the one-off P4/5 for the Glickenhaus collection back in 2006.

Yet in recent years, Jim feels that the Ferrari of old no longer exists after the company was listed on the New York Stock Exchange back in 2014.

Alongside having to keep shareholders happy, Ferrari announced that it would increase its production quota of vehicles from 7,255 per-year, to 10,000 by the end of 2015.

In 2020, the Italian carmaker revealed that it would be pushing for excess of the 10k mark. By 2022, 60% of the Ferrari lineup will be made up of hybrids, and an SUV - the Purosangre - will also enter production.

Jim Glickenhaus: “The Ferrari I Knew and Loved Hasn’t Existed for a Good Few Years Now”

When speaking to Jim, he sounds almost wistful that Ferrari has gone from a company that made “beautiful cars in those wonderful days of the 1960s” as a way of making money to fund its racing endeavours, to a business that solely exists to turn a profit.

The difference between Ferrari in 2021 and Glickenhaus in 2021 is so profound, that when asked how many of his SCG he plans to sell, he nonchalantly responds with “uh, somewhere between a couple hundred and a couple of thousand, not much. 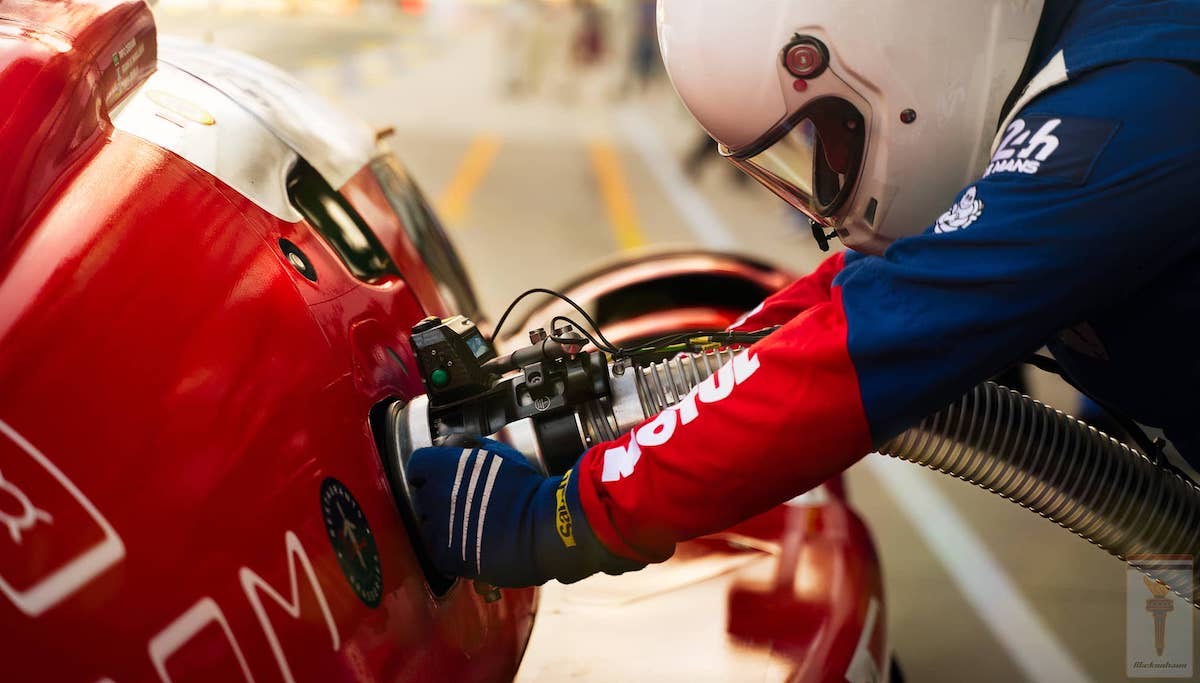 Jim Glickenhaus: “We’re a small car maker who makes road cars and takes the profit from them to go racing.”
© Studiozero.eu

“Quite frankly, the Ferrari I knew and loved hasn’t existed for a good few years now, and I think that we at Glickenhaus are what Ferrari once was. We’re a small car maker who makes road cars and takes the profit from them to go racing.”

The phrase “when the flag drops, the bullshit stops” is an accurate description of what Jim and his privateer outfit are all about. Go to their Instagram page, and their ‘about’ section reads “we design vehicles to compete in the toughest races in the world. Then we make road-legal versions.”

There is no truer description of the Glickenhaus Racing team’s 2021 Le Mans debut.

The story of Glickenhaus’ debut performance at Le Mans this year is one that captured the hearts of racers the world over.

Yet in all honesty, going up against the financial clout, hybrid power, and Le Mans-winning experience of the factory Toyota GR010s, victory would have been difficult for Glickenhaus Racing in its first crack at the world’s greatest endurance race.

“Honestly, I’m extremely happy with P4 and P5 overall at Le Mans,” Jim explains. “Having both cars run without any problems and make the finish on our debut was a great accomplishment. If we hadn’t been locked out of the pits during one of the Full Course Yellow periods, then I’m certain that we would have fought with the Alpine right for third overall.

“If I had to change anything about how we went on our first time out, then I think we would have all liked a little more experience of running in the rain, but that’s racing and we aim to learn something new every time we go out there.”

The Glickenhaus 007s finished a commendable fourth and fifth on their Le Mans debut, but Jim reckons they were good for the podium had it not been for a Full Course Yellow
© Studiozero.eu

Eventually, Jim concedes that he would rather win Le Mans than the outright FIA World Endurance Championship. However, it is a surprise to learn that it was only the 2018 introduction of the sport’s Le Mans Hypercar regulations to replace the LMP1 category, which brought Glickenhaus over to the world’s greatest endurance race.

The new regulations had been designed to reduce the rapidly spiralling costs in sports car racing’s top-tier, and introduce cars that looked half prototype, half road-going super sports car.

In short, the LMH category was aimed at creating cheaper, less technical cars, which looked not too dissimilar to something you could buy - albeit for a large sum of money - from a manufacturer. It was manna from heaven for Glickenhaus Racing.

“You know, it was not necessarily our plan to race at Le Mans,” Jim says. “I’ve always loved pretty cars, and I always wanted to build a pretty car that reminded me of something that raced at Le Mans during the 1960s. The LMH regulations allow you to do that; LMP1 didn’t.

Make no mistake, the Glickenhaus 007 is a manifestation of exactly what Jim set out to do. It’s a very pretty car.

Built from the ground-up to compete against more established manufacturers in the WEC, the car’s design is petite yet aggressive; akin to an old prototype from the late 1960s or early 1970s. Its red and white livery set against gold wheels is striking. The entire machine looks like a modern day interpretation of Ferrari’s 1970 Le Mans challenger; the beautiful Ferrari 512 S.

Unsurprisingly, the Ferrari-inspired design of the Glickenhaus 007 and his bullshit free approach to racing have seen Jim compared to a modern day Enzo Ferrari in motorsport circles. 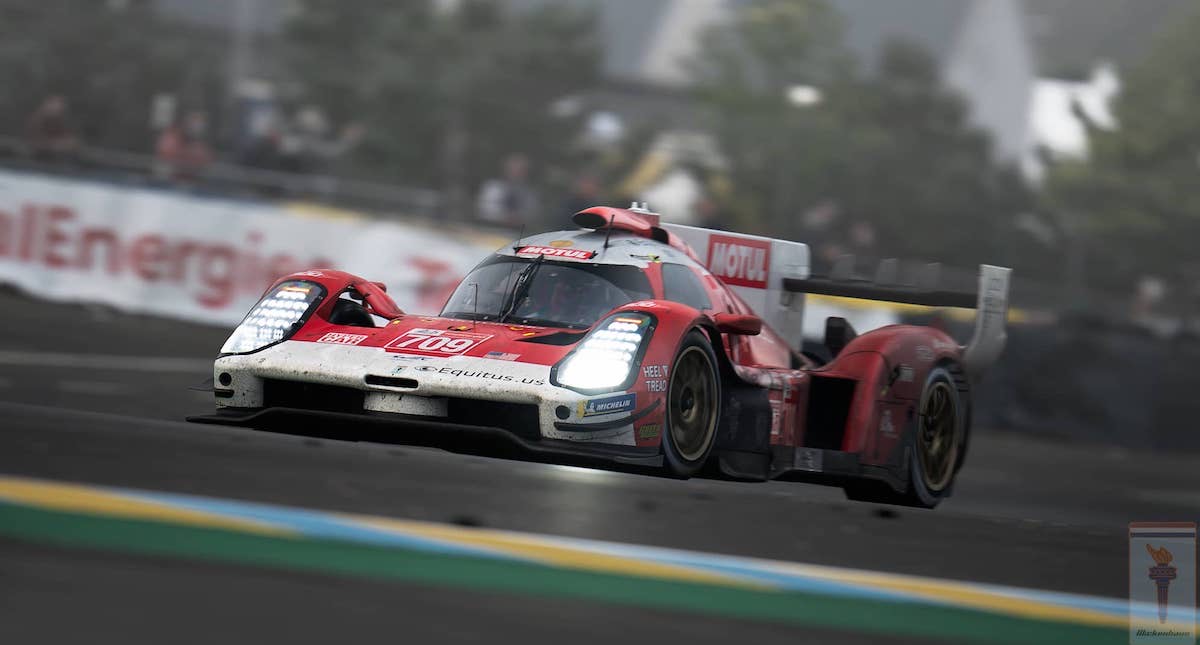 The 3.5-litre, twin-turbo Glickenhaus 007 has won plenty of sports car racing fans thanks to its aesthetic similarities to Ferrari sports cars from the 1960s and early 1970s
© Studiozero.eu

Yet when asked how he feels about the similarities that others see between him and “The Old Man”, Glickenhaus replies with respect and an amusingly thoughtful biblical analogy. It’s the sort of considerate reply you’d expect from a racer who spent their formative years growing up in the old-school.

“Mr. Ferrari did some amazing things,” Jim muses. “I think it’s fair to say that I treat everyone on our team well. That said, none of us should throw the first stone.”

The Big Question: Can Glickenhaus Beat Ferrari at Le Mans?

In 2023, Ferrari will return to Le Mans for the first time since 1973; a race in which it took nine wins from 1949 to 1965. It will also compete in the top-flight Hypercar category against Glickenhaus, who by then will have had two years more modern-day experience of running the event than the Scuderia.

Ferrari’s comeback begs the question - can Jim and his privateer team beat the car maker that originally gave him “The Bug” as a kid peeking through Luigi Chinetti’s Ferrari dealership in 1950s New York? 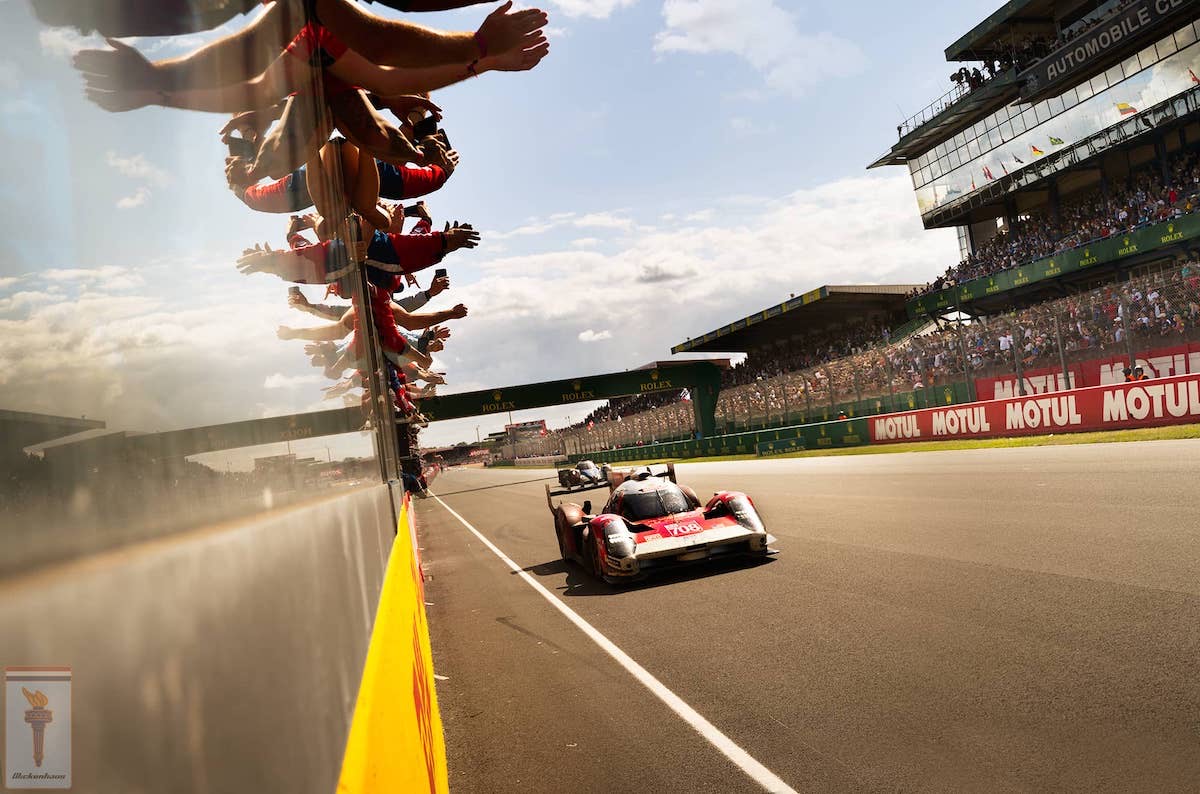 Will we see Glickenhaus take the fight to the Scuderia in 2023 and remind the world of the legendary ‘Ford vs. Ferrari’ battles at Le Mans?
© Studiozero.eu

“Ferrari will be trying damned to win Le Mans outright for the first time since 1965, and we’re there to beat them; that’s my plan,” he chuckles. “However, the future is not ours to see, but we will stand tall and do our best.”

To take a look through the racing cars listed on Dyler.