After a strange August of being here, there, and everywhere across the UK, all of us at Dyler are happy to bring you the very first September edition of This Week in Cars.

Whilst there wasn’t much Formula 1 last month due to the sport’s annual summer break, there was the Le Mans 24 Hours. 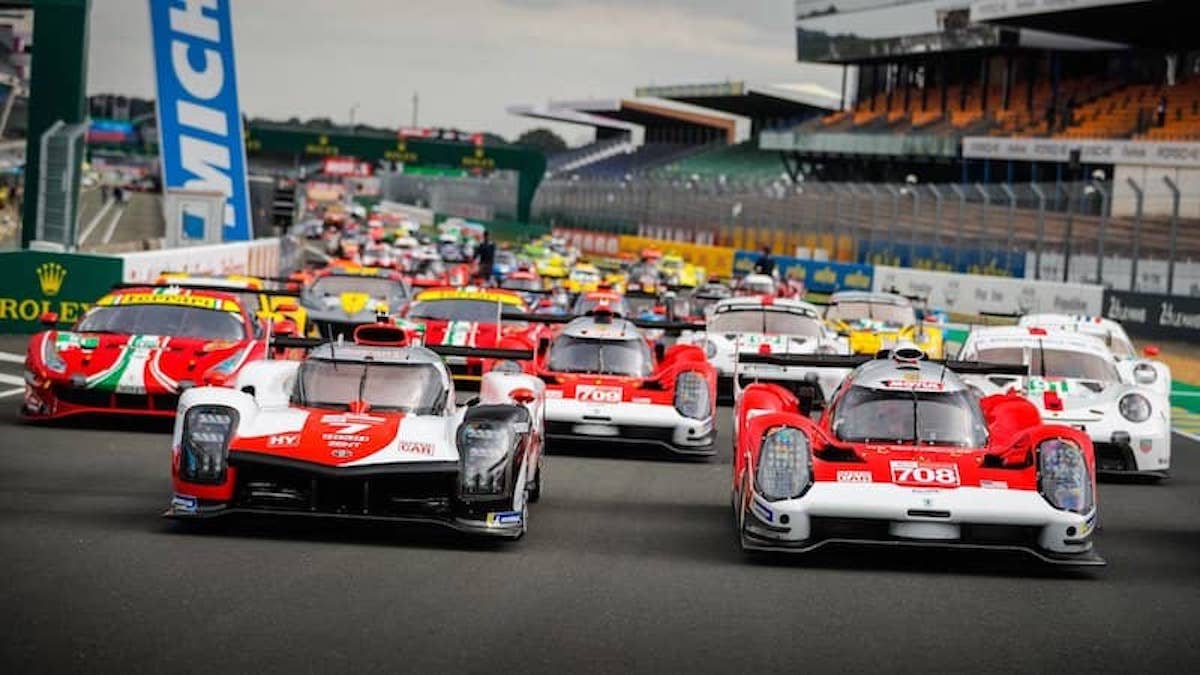 The 2021 24 Hours of Le Mans was the motorsport highlight of August
© gtplanet.net

Whilst Toyota scored another win, Glickenhaus Racing - headed by man and legend Jim Glickenaus - won a bunch of new fans the world over thanks to their non-bullshit approach to racing and impressive achievement of finishing the world’s most gruelling endurance race at their first attempt.

By the end of the 24 Hours, both Glickenhaus 007s crossed the line in fourth and fifth overall after running like clockwork for the entire race.

To kick things off for autumn, we caught up with Glickenhaus to find out what he thought about his team’s Le Mans baptism, the descriptions of him as a modern-day Enzo Ferrari, and whether he can take the fight to the Scuderia when they make their Le Mans comeback in 2023 - to read this exclusive interview, click here!

Given the motorsport angle of things this week, this edition of This Week in Cars features five of our favourite race cars listed on Dyler. If you’re interested, you can also keep up-to-date with what we’re up to by following us on Facebook and Instagram.

That’s everything from us this week, and believe us, it’s good to share some news and features with you once again - here’s to a strong end to 2021 for all of us! 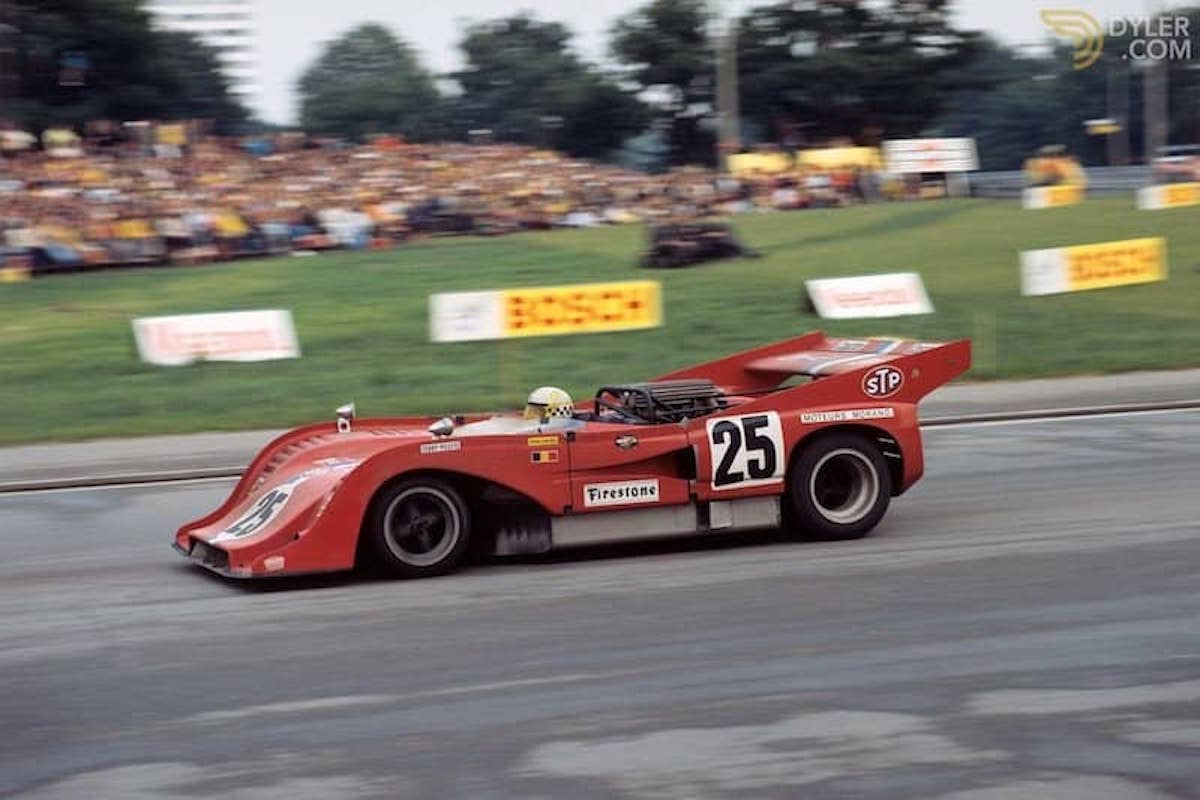 CanAm is widely considered to be Group 7 sports car racing at its wild best
© Girardo & Co.

Whilst mainly known for its Formula 1 heroics, the McLaren team also boasts plenty of history in other disciplines of motorsport. The M8F was developed for the North America-based CanAm championship, which raced Group 7 sports cars from 1966 to 1987. Alongside McLaren, manufacturers including Ferrari and Porsche were drawn to the championship for its non-specified engine capacity, no minimum weight limit, and the ability to use both superchargers and turbochargers. The McLaren M8 was peak CanAm, with the M8F showing McLaren at its brilliant, technical best. The car - and remember this was 50 years ago - was put together using a groundbreaking, lightweight mix of aluminium and magnesium. The Chevrolet motor in the back produced a massive 930bhp, making it one of the most successful and frightening cars on the grid. The car here has been described as “the most original [M8] chassis in existence”. 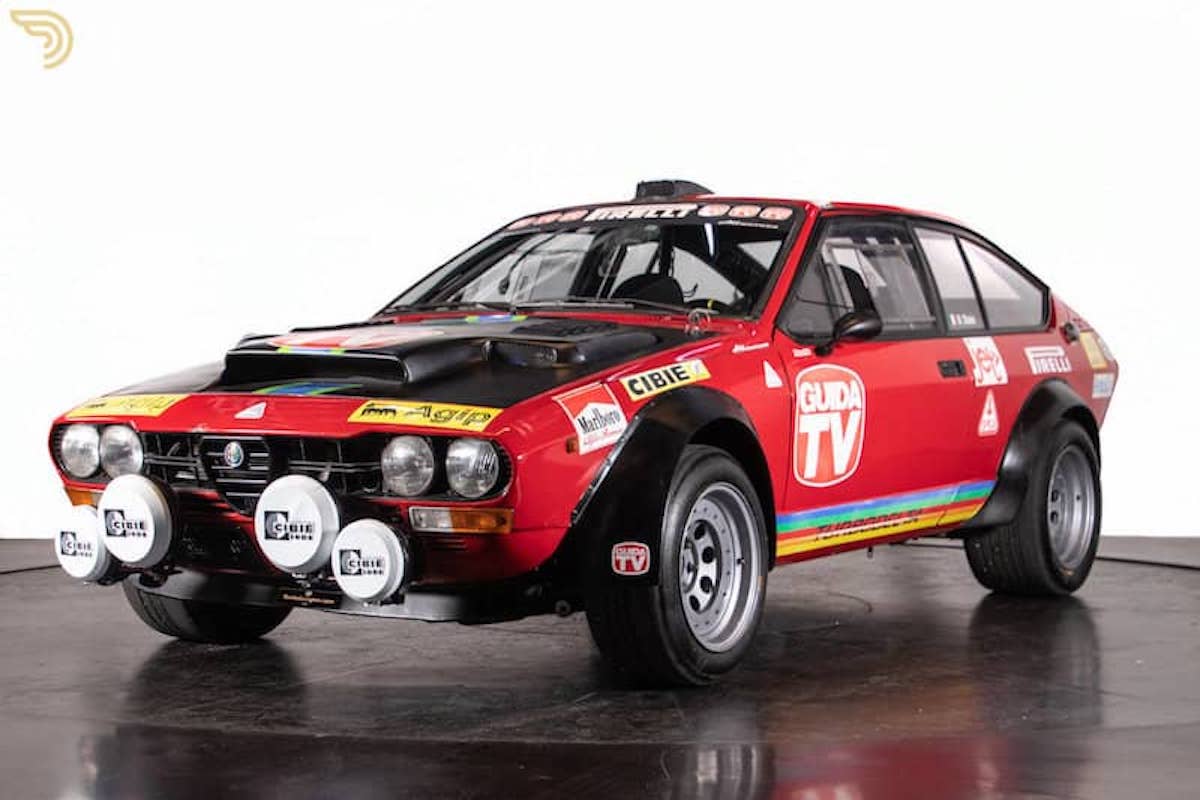 The Alfa Romeo GTV Turbodelta was what happened when Alfa briefly flirted with the idea of competing in the World Rally Championship at the end of the 1970s; an idea it quickly dropped in favour of turning its attentions to Formula 1. Between 1979 and 1980, only 400 GTV Turbodeltas were made for homologation purposes to take part in the WRC’s Group 4 category; a figure which makes it one of the rarest race-ready Alfas around. Under the guidance of legendary Italian race engineer, Carlo Chiti, Alfa fitted a turbocharger to increase power to a figure much higher than the 150bhp put out by the standard GTV. The car here was owned by Alfa Romeo for development purposes, and has since been restored to its original state. 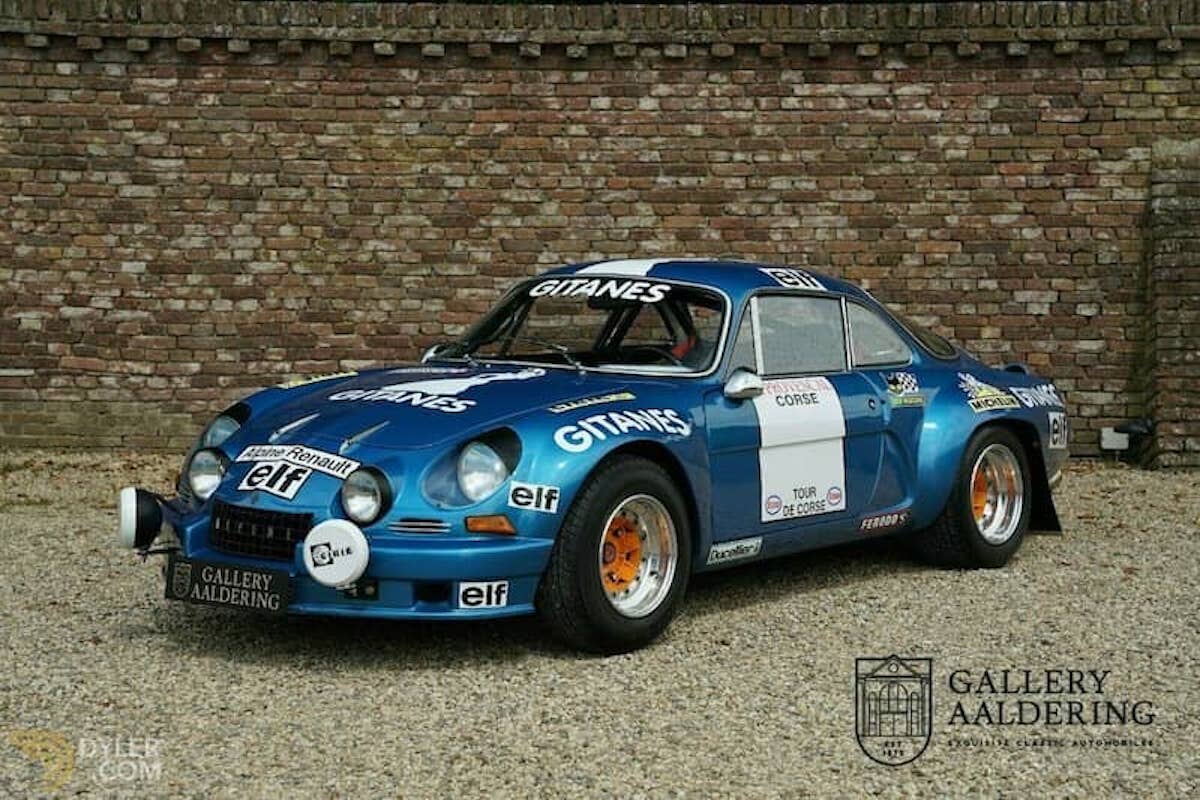 Believe it or not, the Alpine A110 was the first ever car to win the World Rally Championship when the series was introduced in 1973. The A110 here comes from a time when the little French coupé was nearing the end of its life, and Alpine threw everything at it to keep it competitive on the WRC stage. The engine was upgraded to a 1.6-litre, 140bhp motor which produced a top speed of 130mph. Under the fibreglass body, Alpine also introduced a double wishbone rear suspension to improve handling. By the mid-1970s, the Alpine was outclassed by the Lancia Stratos in the WRC. However, the A110 still remains highly-competitive, and a regular fixture on the historic rallying scene of today. 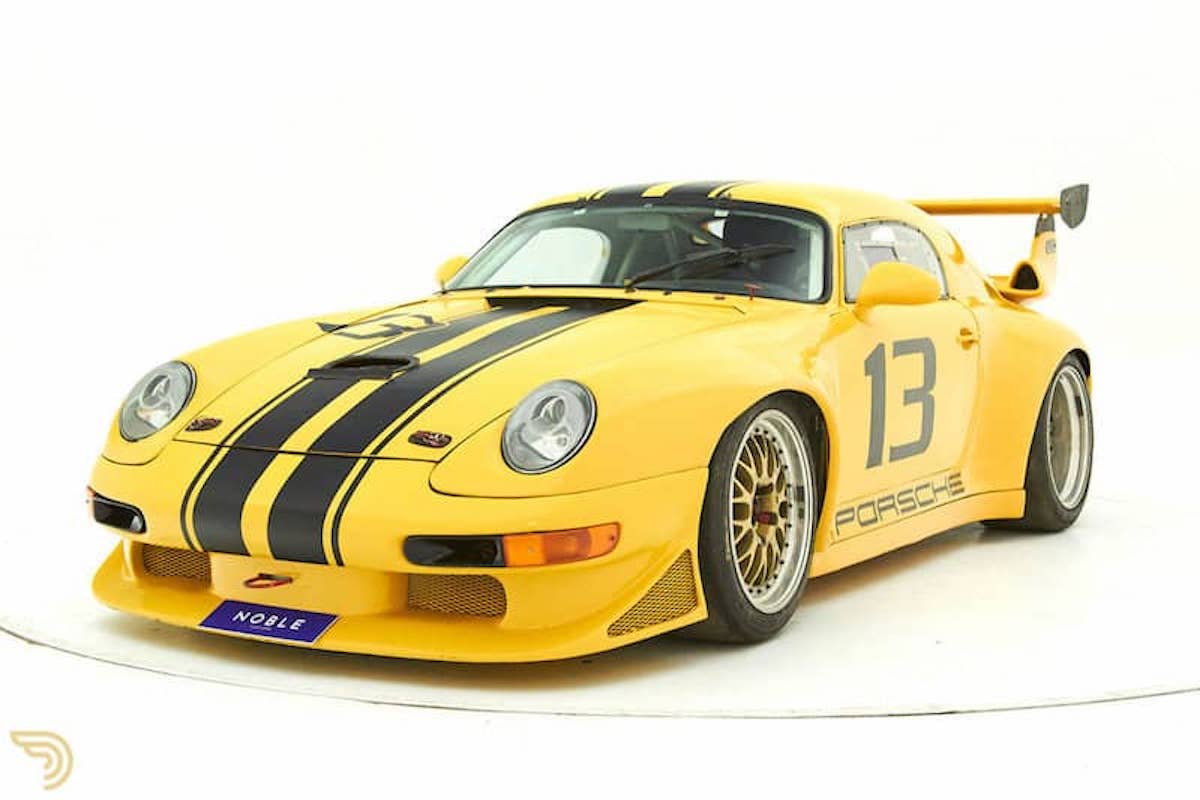 Based on a Porsche 964 Convertible, this 911 Belcar competed in the Belgian sports car championship and FIA GT from 1998 to 2001. Originally run by the AD Sport team, the yellow and black Porsche finished twice on the podium at Zolder, and was also run by the Russell Racing and JMT Racing outfits during its later years. Over the last decade, this 993 mock up has been largely sedentary over the last decade. However, extensive repairs to the body and six-cylinder boxer motor have been carried out. The engine - depending on the state of tune - will produce between 350 and 400bhp. 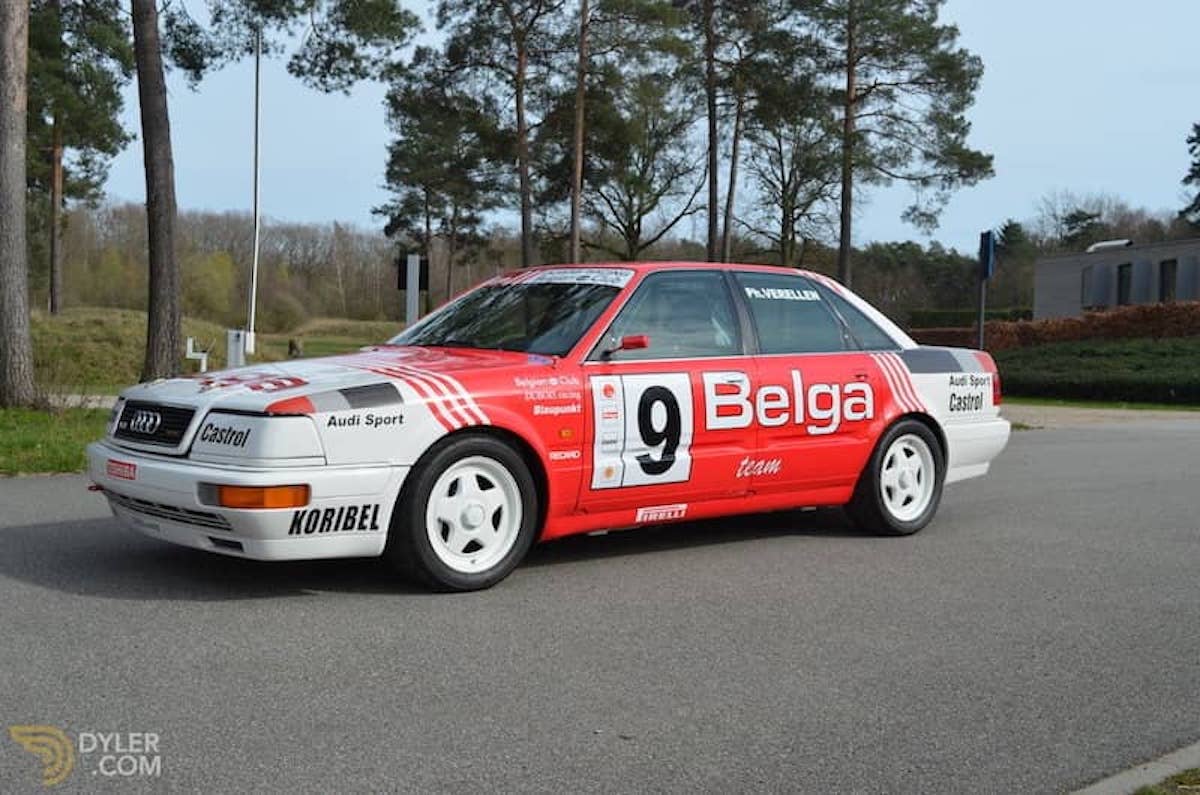 Big, powerful, and tough, the Audi V8 is one of the definitive tin-tops of the early 1990s
© Machines With a Mission

Despite its size, the Audi V8 was one of the most successful touring cars of its era. During the early 1990s it won a handful of DTM titles, and the car you see here competed successfully in the Belgian Procar Championship. Driven by journalist-turned-racing driver, Philip Verellen, both car and driver finished third in 1990 and took the Belcar title the following season. Verellen sadly passed away in 2002, and his brother spent the next 11 years restoring the big Audi back to original Group N competition spec. A unique, track ready opportunity.

PRICE:
EUR 36,000
LINK TO CAR AND DEALER:
Machines With a Mission