The Alfa Romeo 164, Mercedes C 36 AMG and the Maserati Shamal are Some of the Best Modern Classic Car Interiors for Sale Today 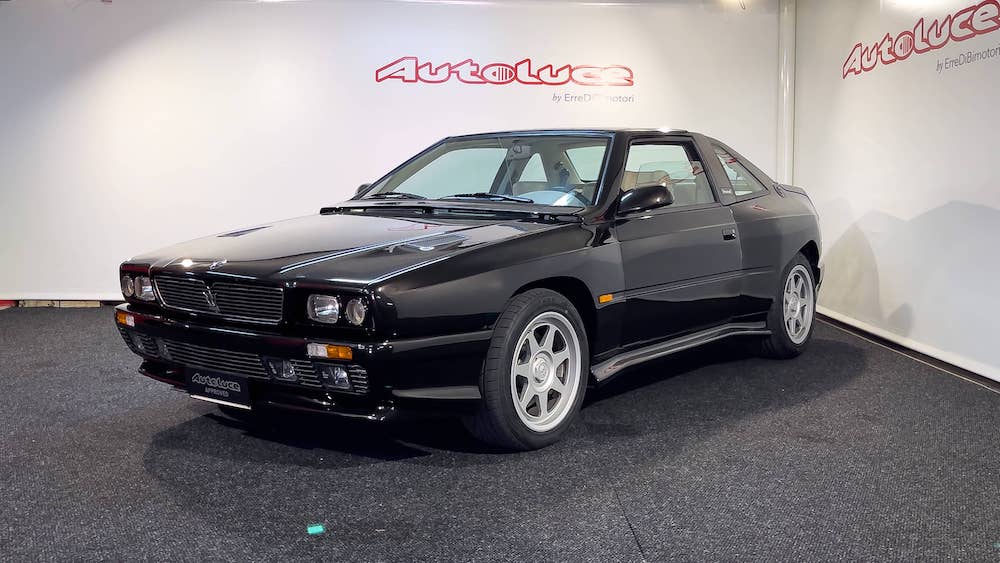 However, we can’t help but think that the mass-digitalisation of car interiors may be taking something away from a car’s personality. In short, we’re wondering whether classic car interiors - especially those found on modern classic cars or ‘youngtimers’ - have more character than car interiors of the last five years or so...

To find out, we’ve compiled this list of 10 of our favourite interiors from back in the day. What’s more, each of these modern classic cars are for sale on Dyler if you’re interested! 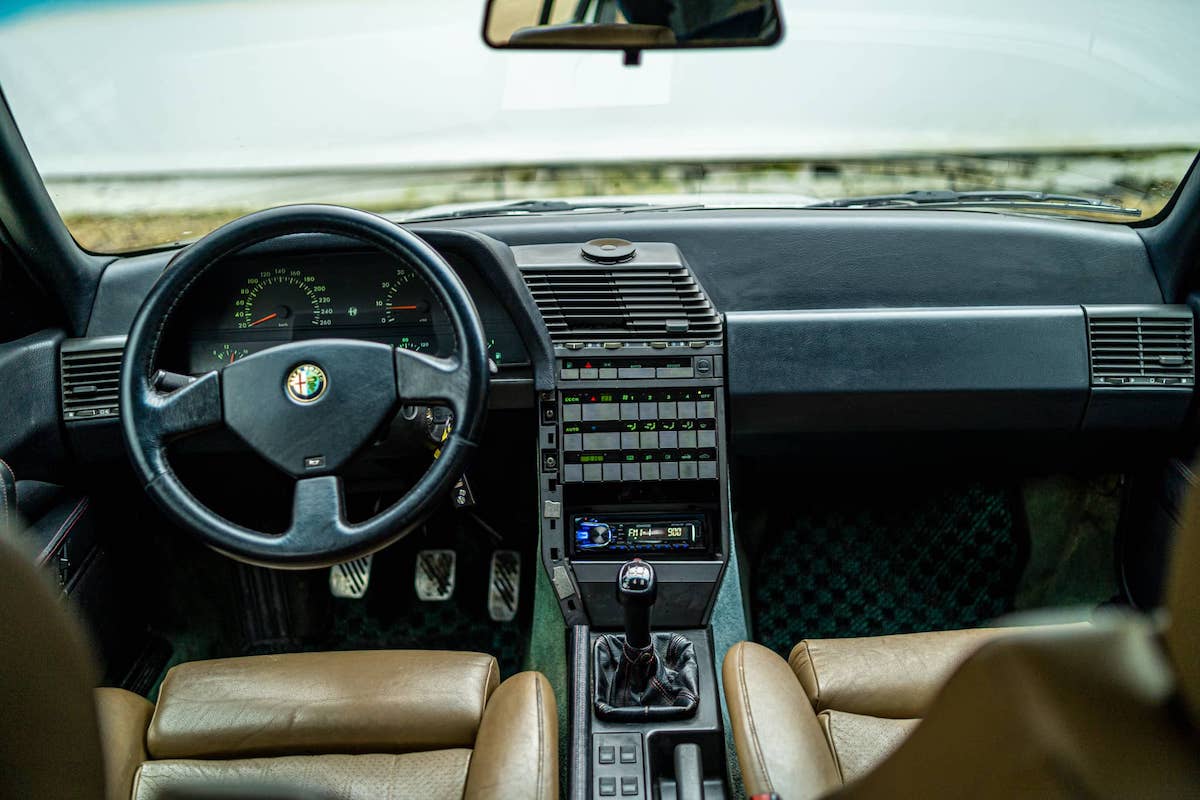 The interior of the Alfa Romeo 164 is one of Italy’s more restrained efforts from the late 1980s/early 1990s.
© Youngtimer.eu

The 164 is today considered to be one of the best youngtimer Alfa Romeo cars on sale today. Alongside its range of glorious-sounding engines and Pininfarina styling, the 164’s extremely period interior is one of its draws. Alfa Romeo launched the 164 in 1988 to great fanfare as a step-forward for the brand, and indeed it was in terms of reliability and build quality. The interior is a sharp-angled array of semi-piano key switchgear, bright lights, and digital readouts which light up like a Christmas Tree. This was the era of the digital watch, so it would have been churlish for Alfa to have done anything otherwise.

LINK TO CAR AND DEALER:
Youngtimer.eu 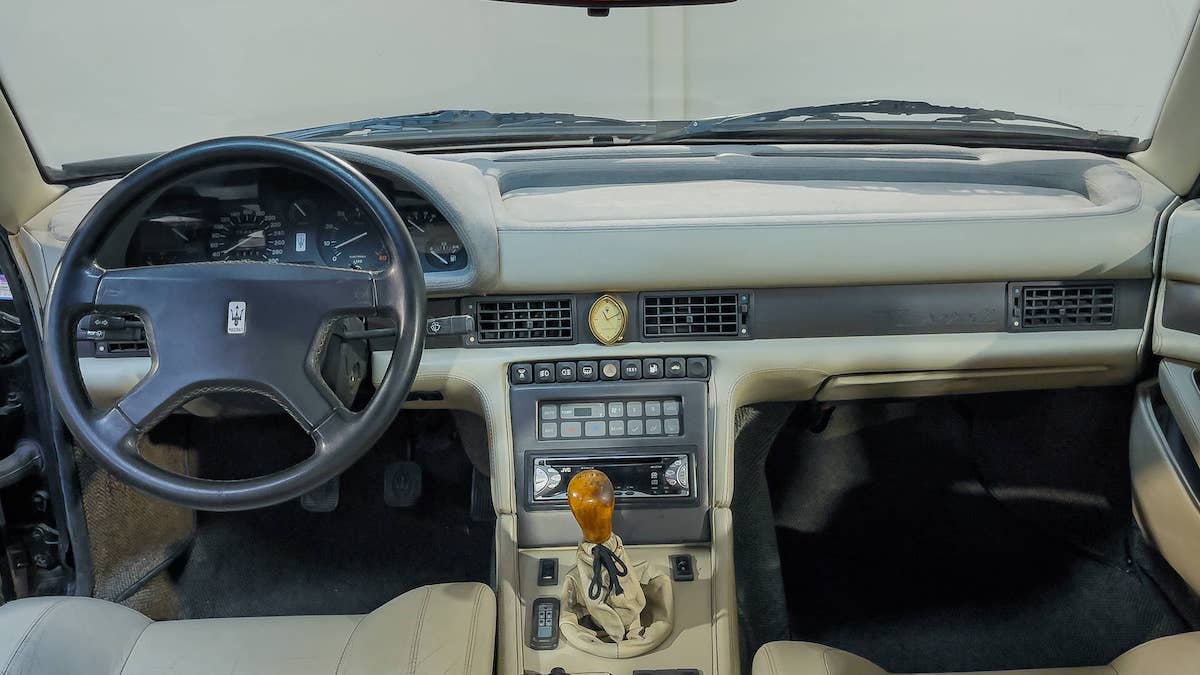 Effortlessly stylish inside and out, the Shamal is one of the most desirable Maseratis in the modern classic car world today
© AutoLuce

Launched in 1990, the Maserati Shamal arrived at the end of a time when Italian car makers were still putting it “out there” when it came to car interior design. Thankfully, when Maserati developed what has become one of its most sought after modern classic cars, the Shamal was given a pleasantly understated interior which made ergonomic sense - Maserati’s muscular, ‘90s GT was bereft of any window switches on the roof (see, the Alfa Romeo 75) or deep-set switches and gauges that would trigger even the smallest form of trypophobia (see, the Lancia Beta Trevia). As you effortly soak up the miles thanks to the Shamal’s twin-turbocharged, 326bhp V8, its cabin is a comfortable, stylish place to be.

LINK TO CAR AND DEALER:
AutoLuce 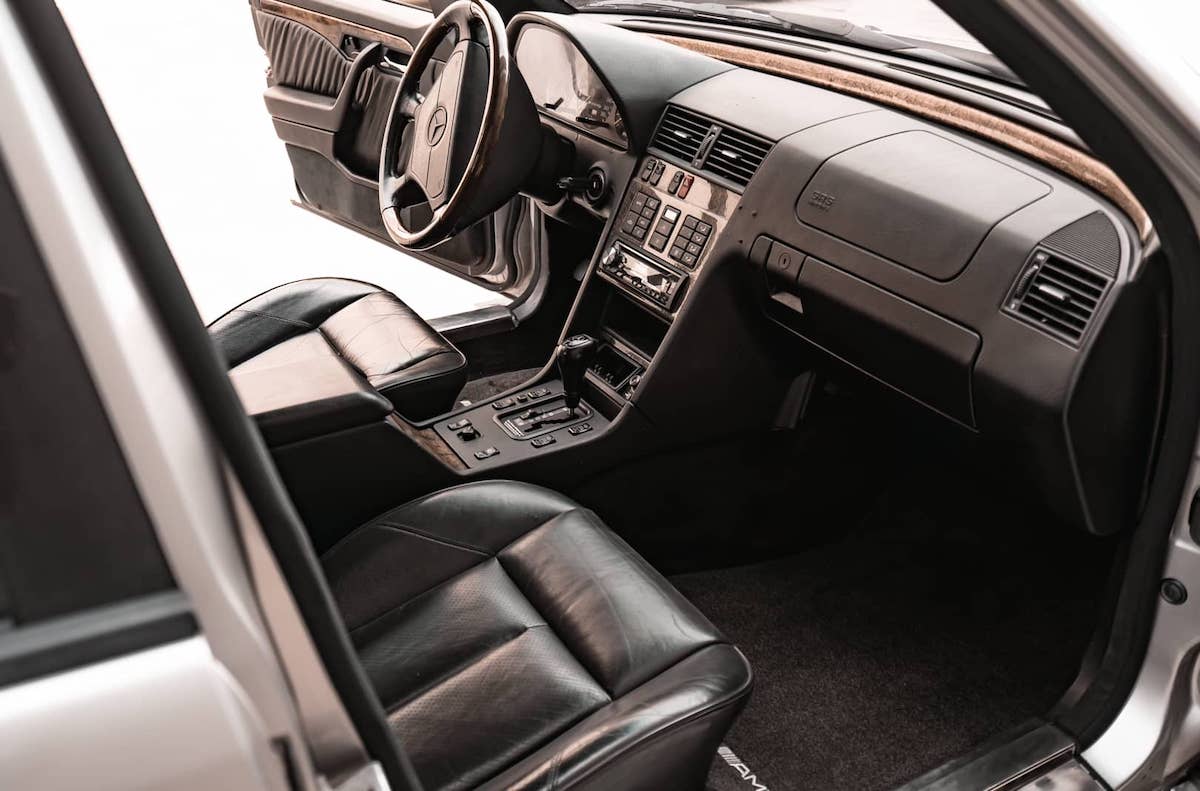 Fast, understated, and made with A-Grade materials, the C 36 AMG is Mercedes-Benz at its brilliant best
© Ruote Da Sogno

When it comes to some of the greatest AMG cars in Mercedes-Benz history, look no further than the 1990s. Cars such as the E 55 AMG (W210) and the C 36 AMG (W202) didn’t have the massive BHP of the modern AMG beasts of today, but these now-modern classics ranked - alongside contemporary Audi and BMW models - as the definition of 90s Q-Cars thanks to their subtle design and then-big power. We’re big fans of the W210 E 55 AMG. In fact, we wrote a buyer’s guide on it back in 2020. However, we chose to include the C 36 here because it was amongst some of the first powerful, mid-sized AMG Mercs that have evolved into what the brand offers today. The C36’s interior is also peak ‘90s thanks to its dark hues, quality materials, and solid switchgear which makes a satisfying “clunk” on its action. Quality. 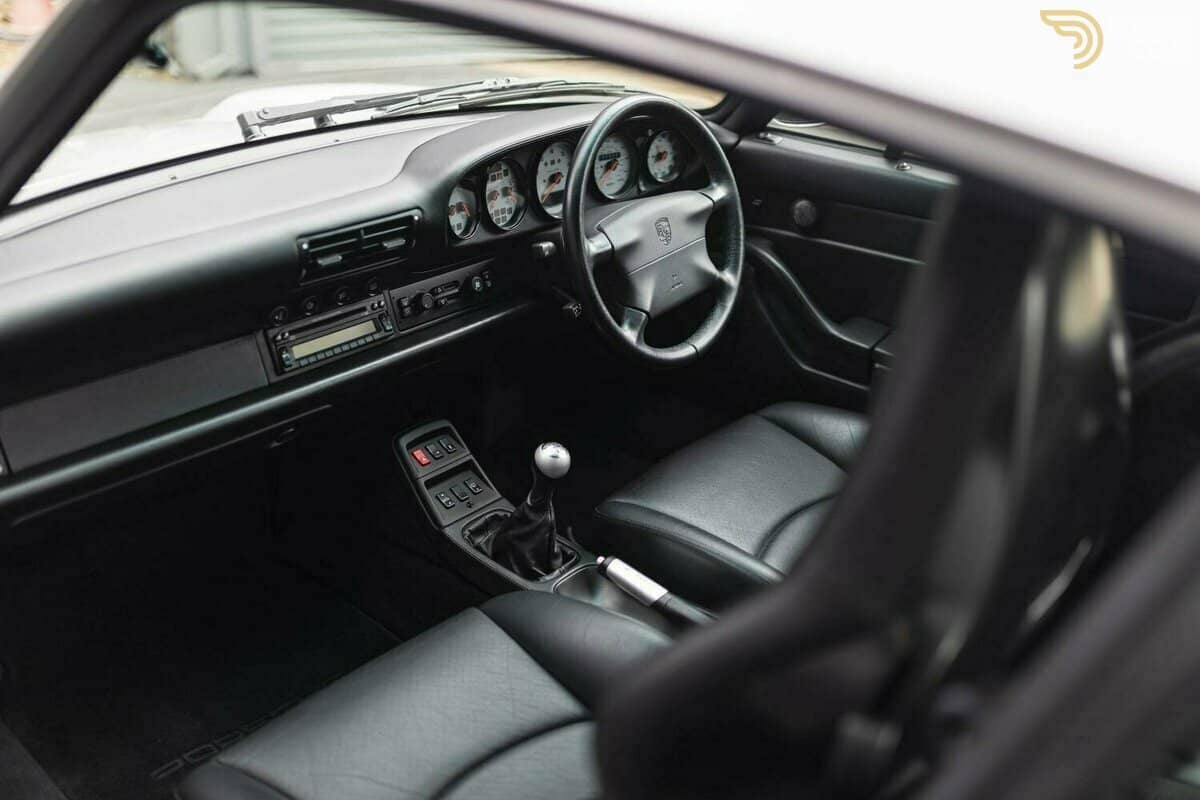 We’re not going to get into a debate about “the best Porsche 911” because to be quite frank, all of them are brilliant. However, we do have a big soft spot for the 993 whose popularity and demand has rocketed within the classic car world in recent years. Not only was the 993 the last air-cooled 911, it was - arguably - the last of its type to be closest to the original car that launched in 1964. As-per the functionalist design philosophy behind the 911, the 993’s cabin has everything you need and nothing else; all dials are within the driver’s field of vision, there’s electric window rockers, HVAC controls, and little else that may be a distraction. Oh, and where the 993 was the last air-cooled car, you can be sure that it’ll have a whiff of burnt oil that’s come to be defined as that “911 smell”. Delicious. 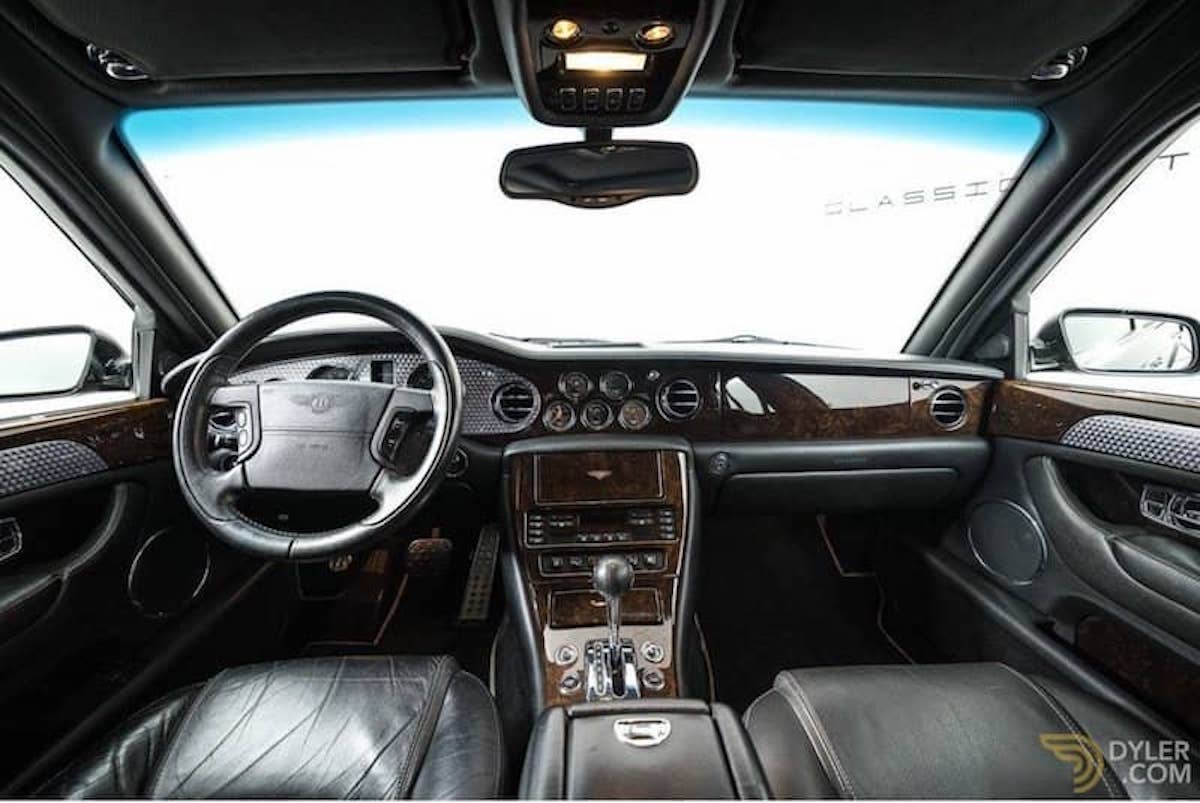 Hear us out, but the interior of the Bentley Arnage is one of the best modern classic car interiors you will ever find
© Classicmaster

The definition of gentleman thuggery, the interior of the Bentley Arnage is a modern classic symphony involving slabs of tree, chunks of leather, and swathes of aluminium. Everything about these materials comes together to create an aesthetic of cyberpunk lunacy meeting your local Conservative club. Oh, and there are organ stop switches on the dashboard. Bentley has always made ornate, eye-catching cabins, but this one - without doubt - is one of its best ever.

LINK TO CAR AND DEALER:
Classicmaster 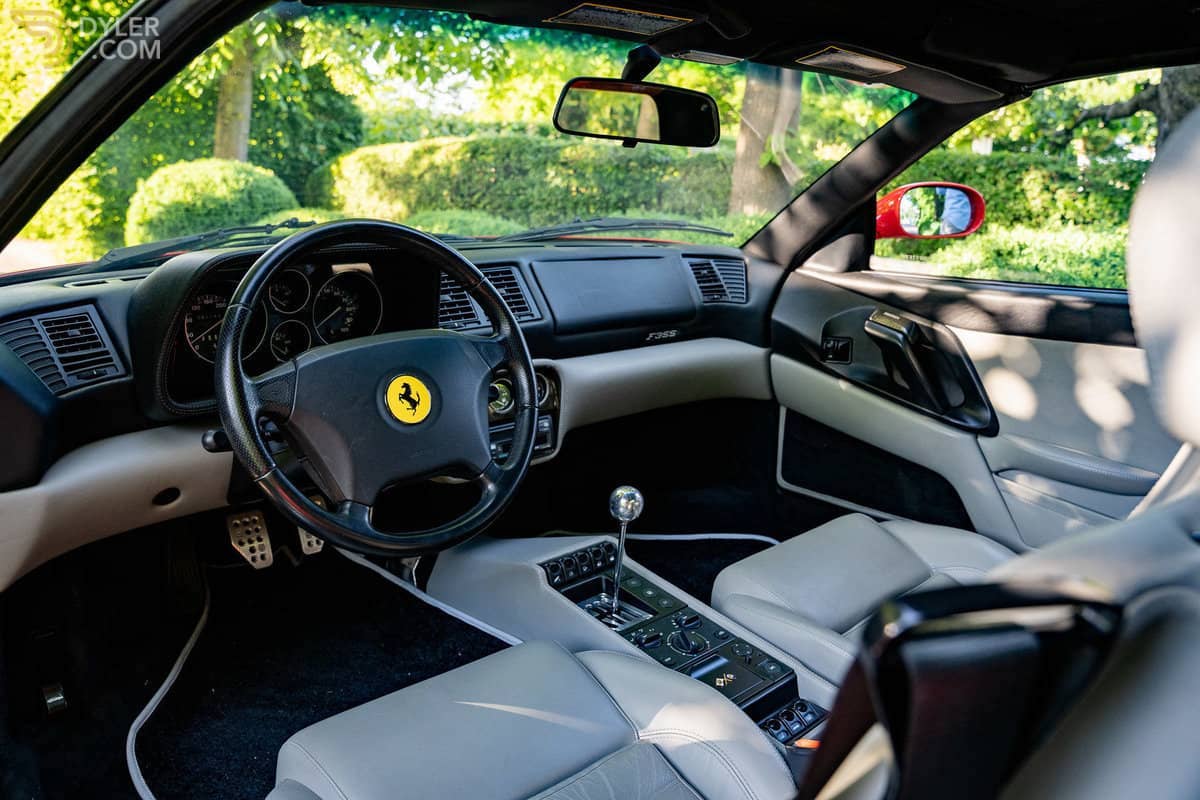 he F355 is hailed as one of the greatest cars to emerge from Maranello and it’s not difficult to see why, is it?
© Belrose Classic Cars

During the 1990s, Ferrari created two of its greatest EVER cars: the V12 masterpiece that was the Ferrari 550 Maranello, and the F355 - the car you see here. Alongside its howling, rear-mounted 3.5-litre V8, the F355 is celebrated for being one of the last old-school Ferraris. It bridges the gap between the brash 348 of the 1980s, and the current twin-turbocharged V8-powered F8 Tributo. Settle inside its low-slung cabin, and all of the F355’s analogue switches are mounted on the centre console to ensure there’s no clutter to distract from what’s still an outstanding-yet-malleable driving experience. Ferrari also fitted manual cars with an open gate six-speed shifter to enable those click-clack fantasies we all harbour. That’s not just me, right? 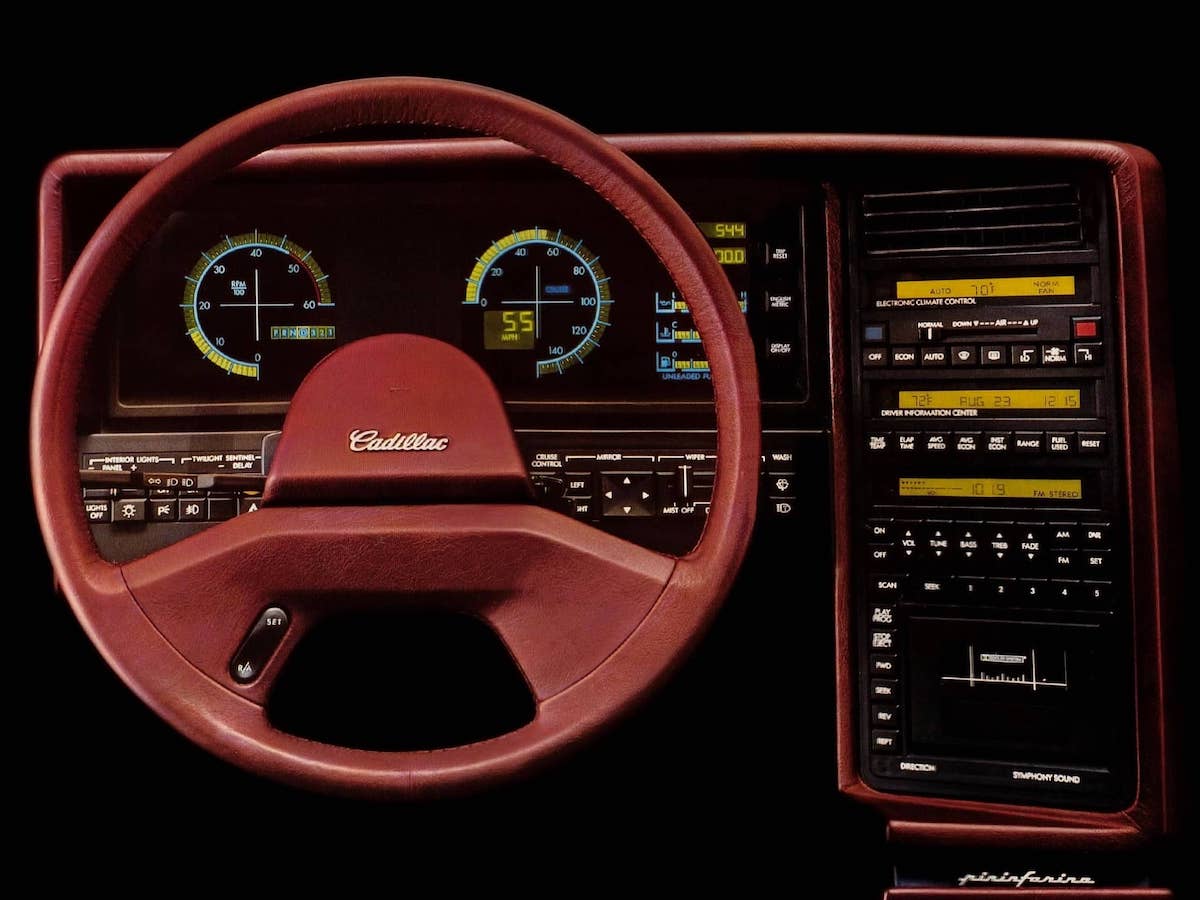 With its digital dials and abundance of electronic comfort features, the Cadillac Allanté is an ideal car for the classic car enthusiast hankering for the 1980s
© Autoluce

One of the more cult modern classic cars to make this list, the Cadillac Allanté made headlines upon its 1987 launch for its obscure production method, and an astonishing cost that put it within the same price range as what General Motors saw as its main rival - the R129 Mercedes-Benz SL. Yet despite all of the Pininfarina-designed Allanté’s quirks, it was - as you can see - one of the first cars that attempted to bring the digital dashboard into the mainstream. When it came to embracing the digital phenomenon of the late 1980s, GM didn’t stop with the driver readouts. As standard, Cadillac packed the Allanté to the hilt with electronic climate control, electronic cruise control, and a driver information centre which was - you’ve guessed it - electronic. The big soft Caddy also had an electronic something called the ‘Twilight Sentinel’ system. I have no idea what that is, so if you do, please send me an email.

LINK TO CAR AND DEALER:
Autoluce 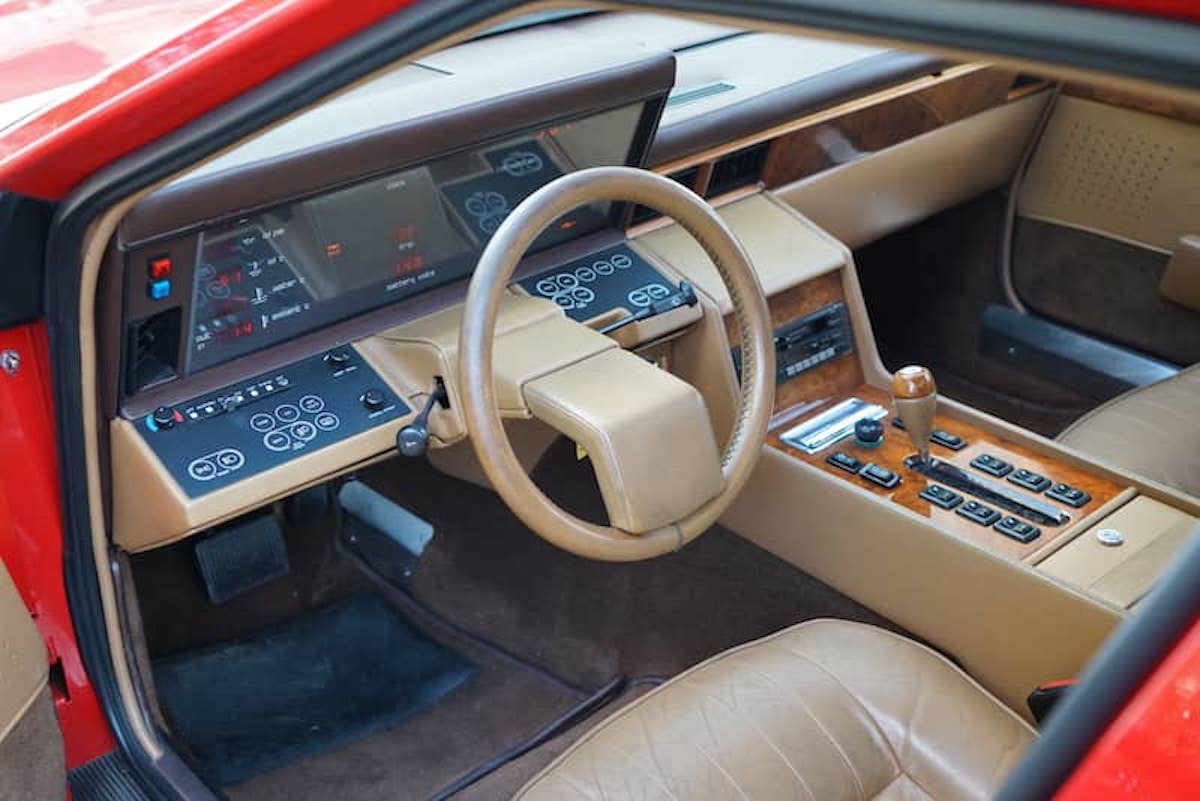 When the British car industry was plagued with malaise during the 1970s, Aston Martin went and did this to its then-flagship Lagonda
© Gallery Aaldering

Whilst the Cadillac Allanté boasted plenty of electronic goodies, the Aston Martin Lagonda - a car that preceded the Cadillac by some 11 years - must have looked like something from outer space when it launched in 1976. Alongside the digital dashboard, what was then the Aston Martin flagship luxury car boasted a very rudimentary system of the haptics and touchscreens found in most modern cars today - the cruise control was touch activated, as were the lights, the window demisters, the climate control system, the boot, and even the bonnet catch. Even in 2021, all of this looks very cool in a retro way. In the mid-’70s it must have been somewhat mind-blowing - especially when you consider that the British automotive industry was churning out terrible, terrible devices such as the Austin Allegro, and Morris Marina at the same time. 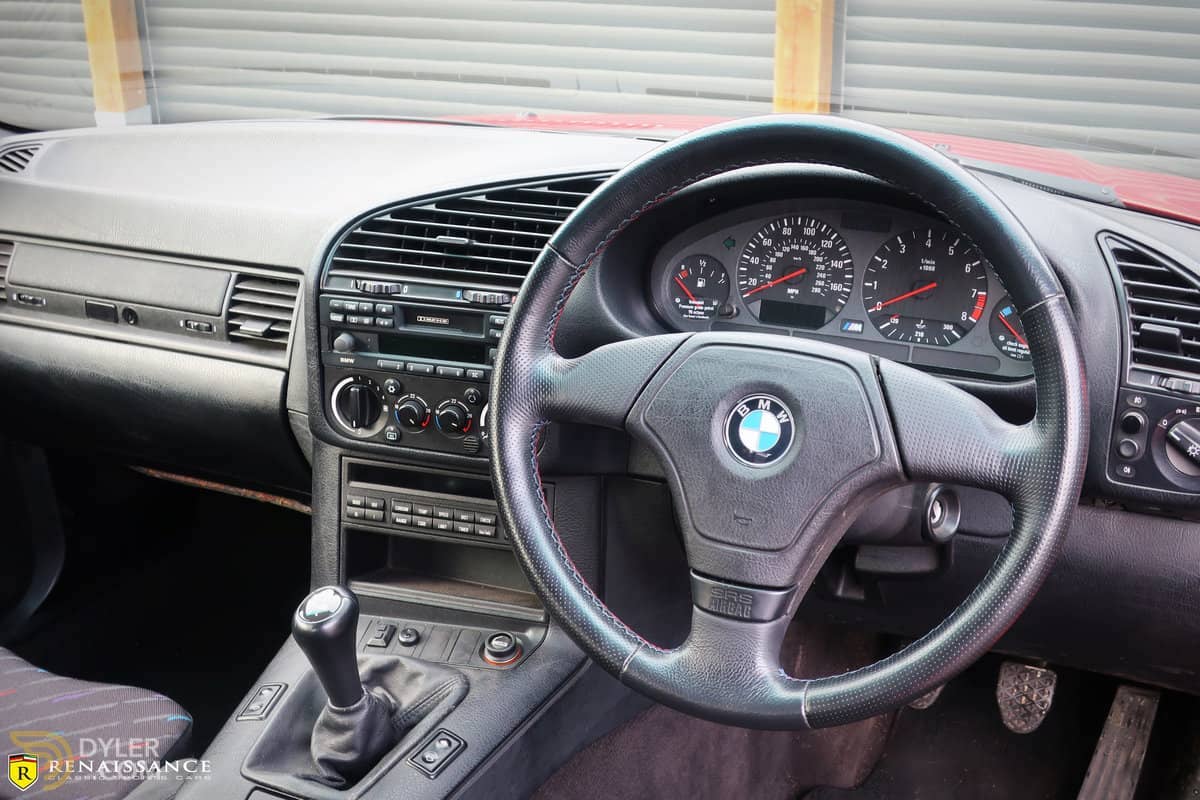 With its manual gearbox and almost no-frills cabin, the E36 M3 is this iteration of the BMW 3 Series at its driver-focused bes
© Renaissance Classic Cars

Dark, uncluttered, and bereft of any silly carbon fibre, the interior of the E36 M3 was everything a BMW M Car should be. What’s more, the six-speed automatic gearbox and naturally-aspirated inline six 3.0-litre engine make the car all that sweeter. 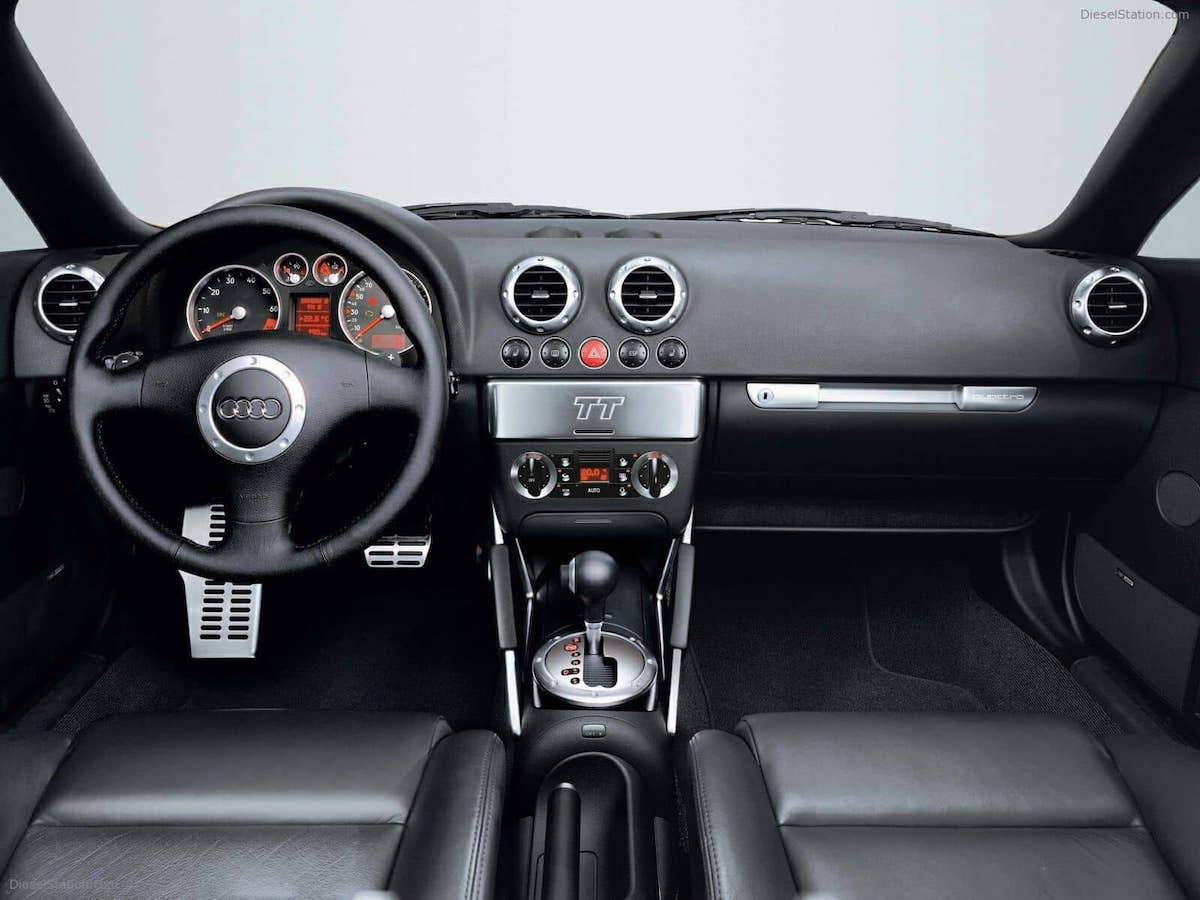 Prior to the Mk1 TT, Audi had long-been synonymous with quality, functionality, and innovation - when the TT arrived in 1998, it added style to its list of attributes
© Pinterest

Ever since ever, Audi has been a synonym for quality. Yet up until the release of the TT in 1998, they were not always the most stylish cars. Thoughtful and intelligent, yes. But stylish… well, functional would be a better description. Yet with the launch of the Bauhaus-inspired, first-gen TT, Audi ripped up the rulebook and showed it could combine style with its traditional attributes. The design of the TT wowed the automotive world with its subtle, curvaceous body. The interior, with its swathes of leather and chunky aluminium inserts also made jaws drop. Almost overnight, Audi had won over a more fashionable, avant-garde audience with its new sports car; a demographic it retains today. What’s more, everything about the TT - inside and out - was all done with Audi’s traditional quality and attention to detail. When it was new, Audi created a masterpiece with the original TT. As cars from all manufacturers have got bigger and more angular over the last few decades, the OG shapely TT has without a doubt got better with age.

Do you think we’ve missed any of the great modern classic car interiors? If we have, please get in touch with us via our Facebook or Instagram pages! Whilst you’re here, if you’re interested in buying any of the cars listed in this feature, please visit dyler.com to browse our listings!